The earliest records of this land, that we know of, were the two surveys that were done in the mid-1800s by the federal General Land Office to divide the land so it could be homesteaded.  In this area, the survey that established the township and range lines was done in 1848, and the one that divided the townships into sections was done in 1852.  The records of these surveys are available online, so I was able to get copies of the surveyor’s notes for the lines that go through or around our land, and the maps that the surveyors drew.

This is the way our land looks in the plat book.  Most of our property is in section 3 of T22N, R11W – in Lincoln Township.  And most of it is north of State Highway 88.  The wider, northernmost piece is in section 34 of T23N, R11W – Gilmanton Township.

Here are the old surveyors’ maps of those two sections.

This is T22N, R11W – where the bulk of our land is.  The wiggly line is Little Waumandee Creek, which runs through the southern part of our property.

This is section 34 in T23N, R11W – it’s mostly the flat tops of the hills, so there aren’t any interesting land features – at least in the southern half, which is our part of it. 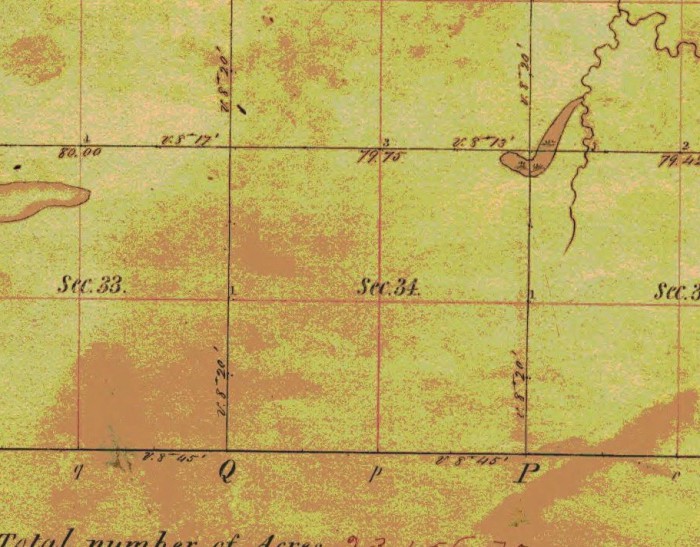 This is an example of the surveyors’ notes from the 1848 survey, with typed transcriptions below.  This page includes a description of putting in a couple of the posts that are actually on, or along the edge of, our land. 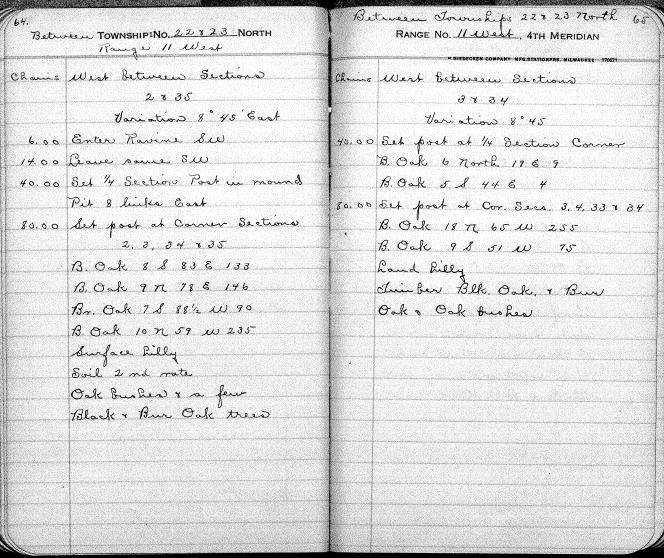 Here’s one page of the surveyors’ notes from the 1852 survey, with transcriptions below (the handwriting is sometimes hard to read).  After the surveyors finished an area, they would write a general description of the landscape – this is the description of T22N, R11W. 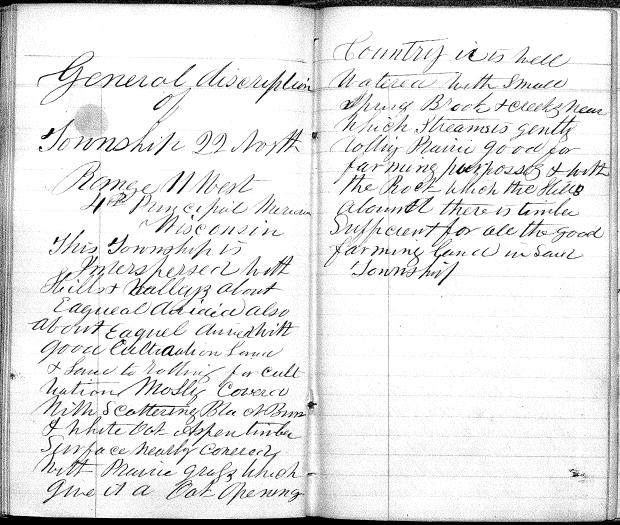 This township is interspersed with hills & valleys about equal divided also about equal divided with good cultivation land and land too rolling for cultivation.  Mostly covered with scattering Black, Burr and White Oak, Aspen timber.  Surface nearly covered with prairie grass which give it a  oak opening.  Country is well watered with small spring brook and creeks, near which streams is gently rolling prairie good for farming purposes and with the rock which the hills abound.  There is timber sufficient for all the good farming land in said township.

When the land was homesteaded, the original owners got documents recording their ownership from the General Land Office.  Two different people got the land that is now combined into our farm.  Herman Gunther (sometimes spelled Hermann, or Guenther), and Carl Lähn.  Carl Lähn was the great (I don’t know how many greats) grandfather of our neighbor, Emmett Rutchow.  At some point the family changed the spelling of their name to Laehn.  Laehn Ridge Road, at the top of Praag Valley, is named after them.  Johanna Laehn lived in the house back in the valley, near where our cabin is now, and she married Carl Rutchow, who lived in the newer house near 88.  Carl’s son Elder was Emmett’s father.  Carl’s younger son Norman was Steve and Margaret’s father, and Norman and his family owned and farmed our land during the time when Emmett was growing up. 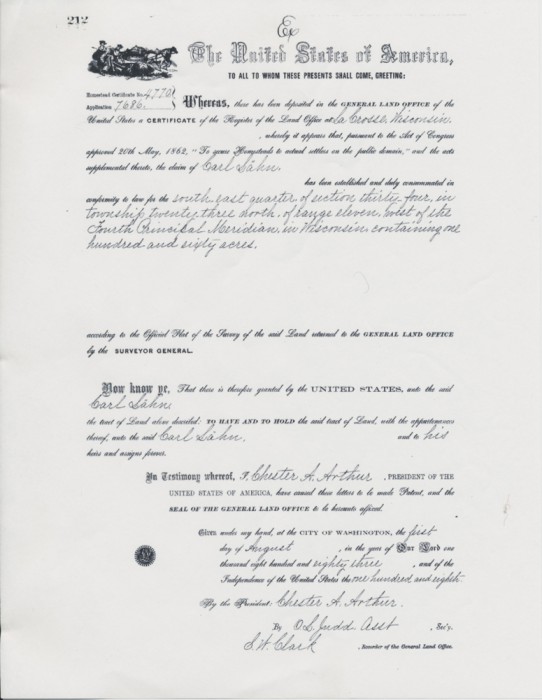 I’ve put all the historical documents and maps that we have up on web pages.   Click on these links to see the details:   Old Survey Maps    Surveyors’ Notes    Original Homestead Land Grant documents  Aerial Photos)

The land grant documents were called ‘Land Patents’, and records of them can be found on a Bureau of Land Management web site.

When we first bought our land, we went to the NRCS office in Alma, because they had all the old aerial surveys that had been done of this area. Here’s the earliest one we found of our property – from 1939. 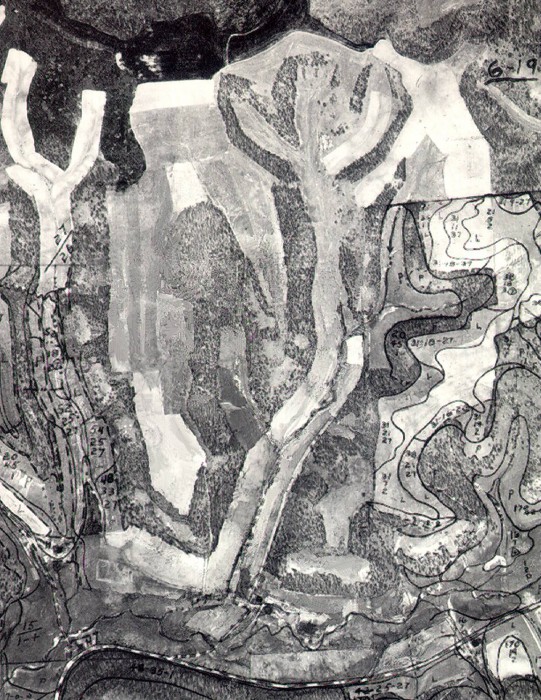 This is the aerial from 1998 – a few years before we bought it – with our boundary lines drawn in. 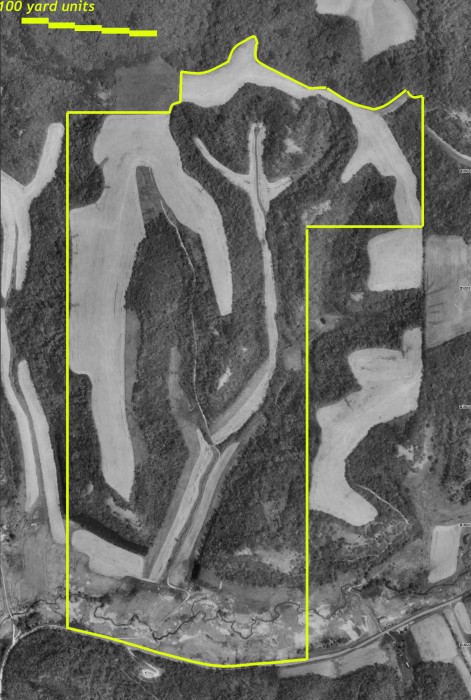 And here’s the latest aerial from Google Maps, with our most recent boundary lines.  Now there are prairies in all the old farm fields, and we’ve added about 70 acres south of Hwy 88. 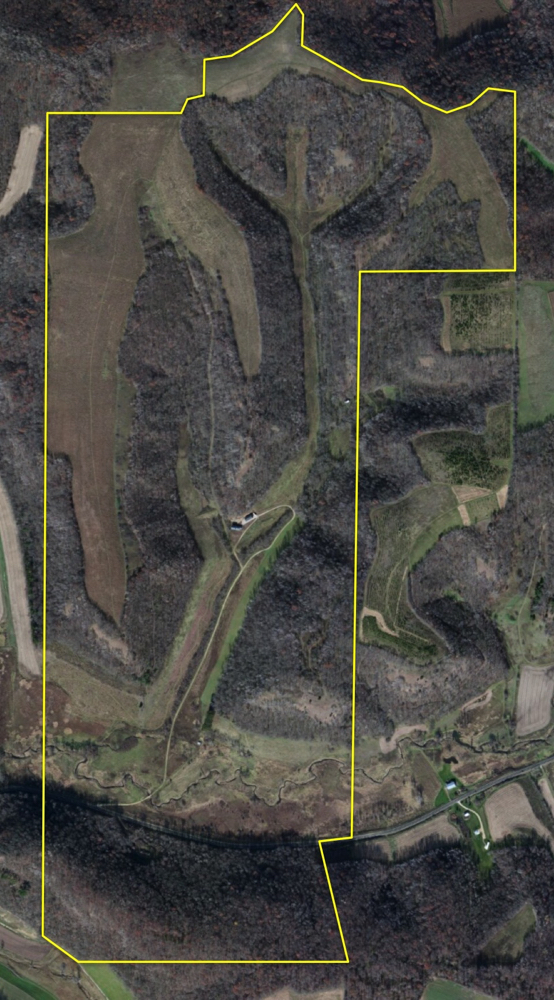 Norman Rutschow and his family farmed the land until 1971, when it was sold to Ed Barnes.  Ed rented the fields for farming, and the woods for hunting. We bought it from Ed in the spring of 2000.

Norman’s children, Steve and Margaret Rutschow, and their cousin Dale Rutschow have been sharing their old photos of the farm, and their stories of the way it used to be.

Steve and Margaret Rutschow – on one of our benches in October 2015. 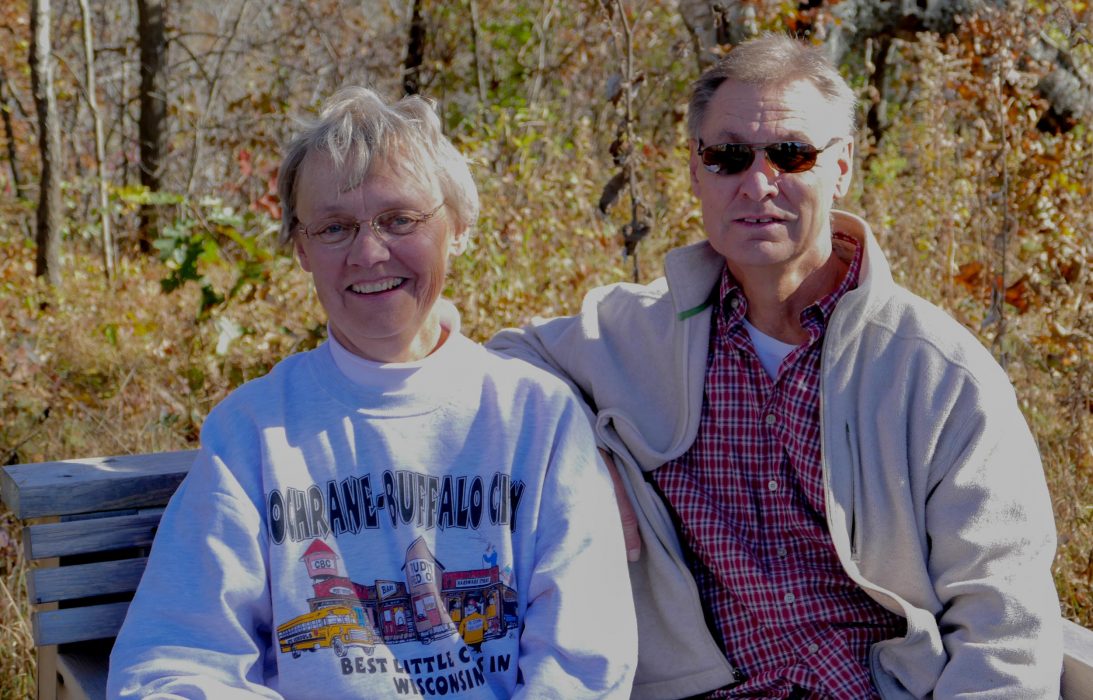 And here they are in about 1960, with trout they had caught in the creek. 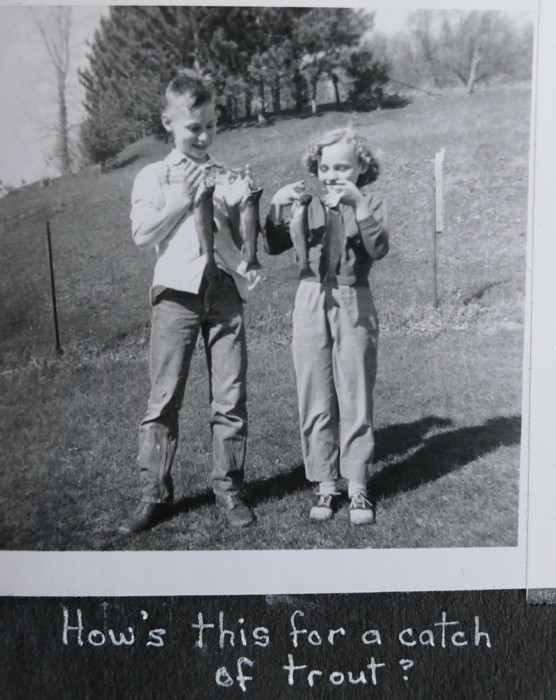 Carl Rutschow and his family – from about 1918. 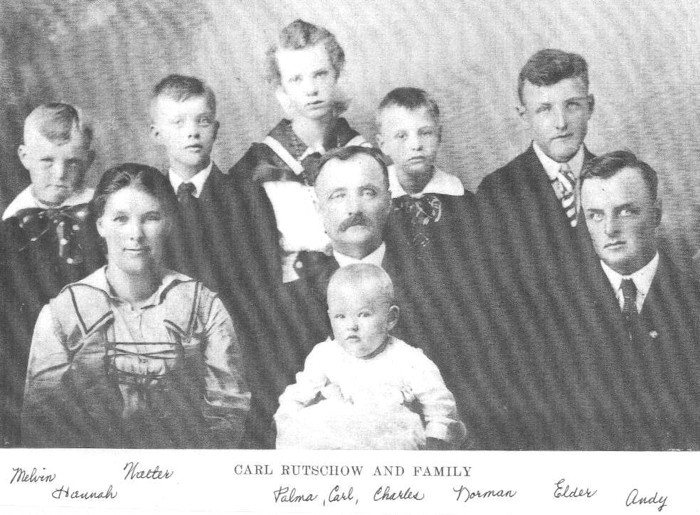 Dave took this picture in 1957 or 1958 as part of a 4-H project.  It’s of the old farmhouse and barn, with Sumac Bluff in the background.   The house burned down 10 or 15 years before we bought the land in 2000.  The barn was destroyed at about the same time.  We can still see the foundations of the house and the barn, and a few of the outbuildings are still standing. 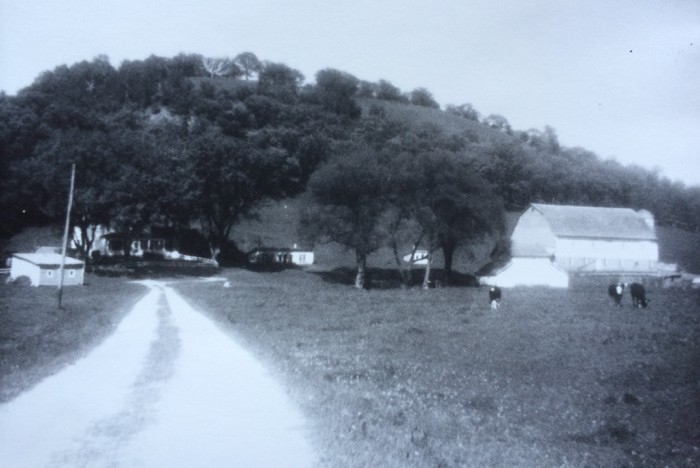 Click here to see more old photos of the farm.