Goldenrods and Asters, Gentians and Blazing Star are in bloom, and birds and butterflies have been migrating though on their way to warmer places.

For the last 3 years we’ve been counting the Monarchs we see on our afternoon walks, starting in mid-August.  (We do the same 1 1/2 hour walk nearly every afternoon.)  We were curious to see when the peak of the migration happens here, and whether we could see any other patterns. 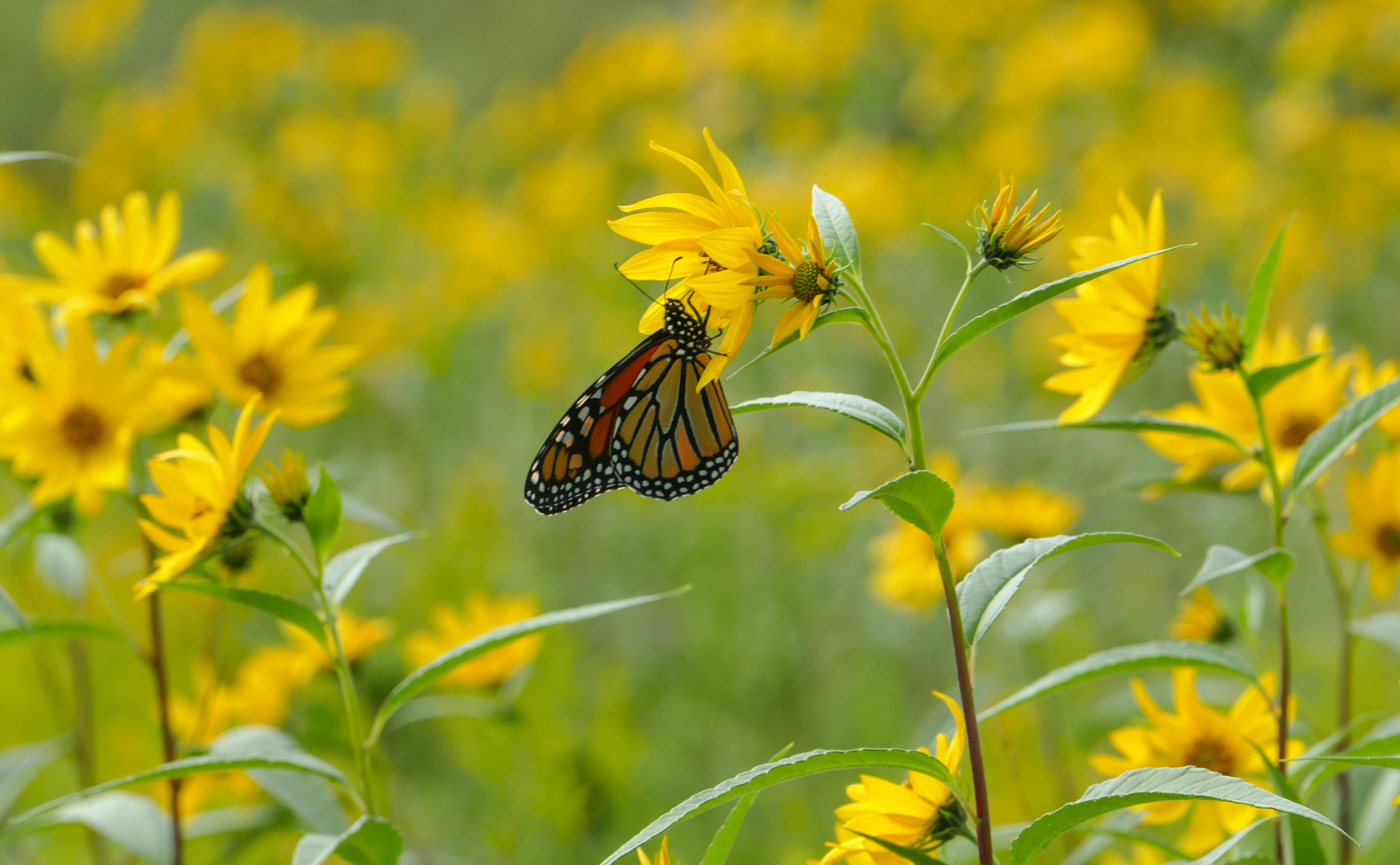 Mike put all our counts on a chart so we could compare the numbers from all 3 years.  This year has been a particularly good one for Monarchs – the population in our area is way up compared to many recent years.   Our largest count this year was on August 31 – 544 Monarchs!  It’s nearly the same peak date as last year. 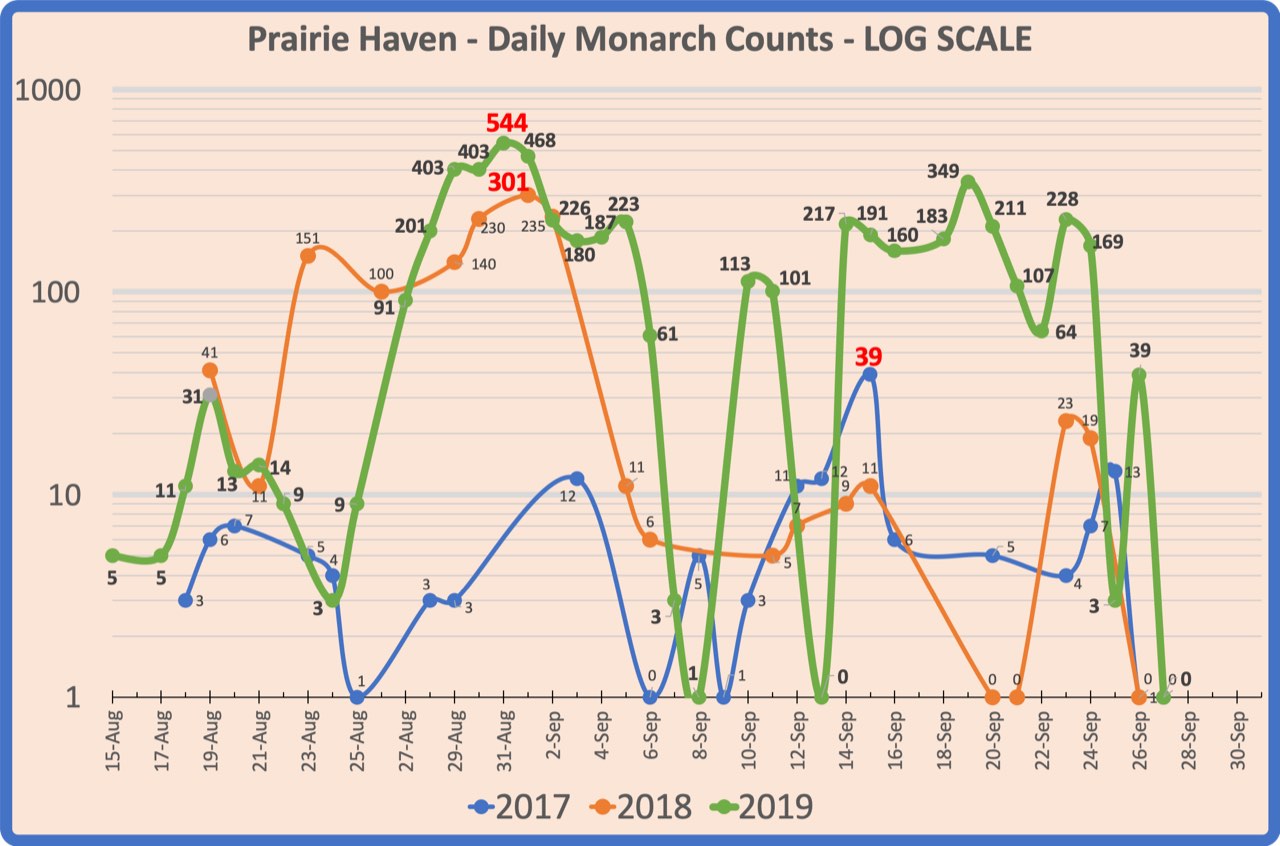 One Monarch was even attracted to my moth lights one night – the first time that’s ever happened. 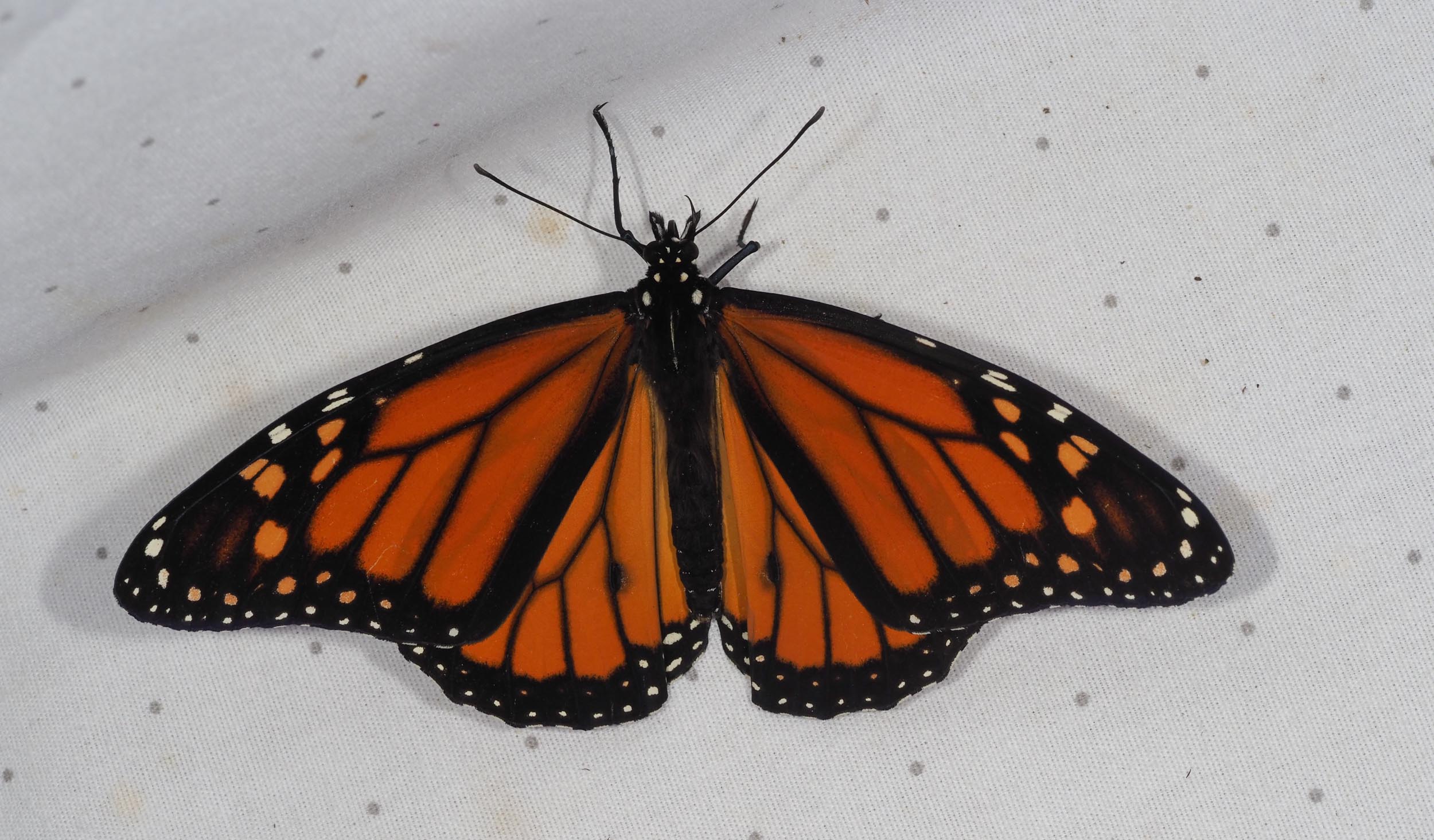 Favorite flowers as the Monarchs are passing through are Stiff and Showy Goldenrod, Rough Blazing Star, and New England Aster.  Some of the largest clusters of Monarchs this year were on Showy Goldenrod – like this one. 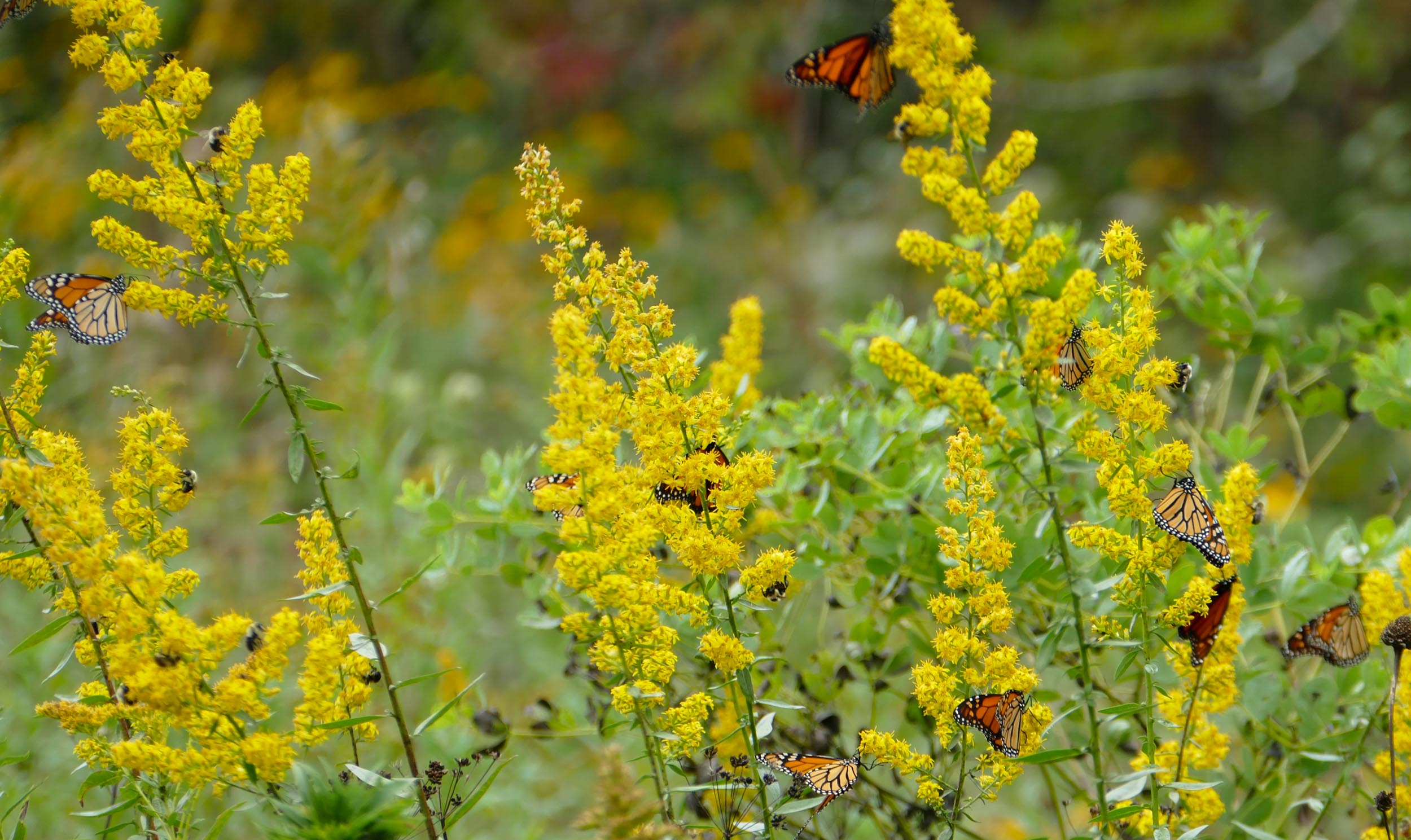 Monarch and a Flower Fly on Showy Goldenrod 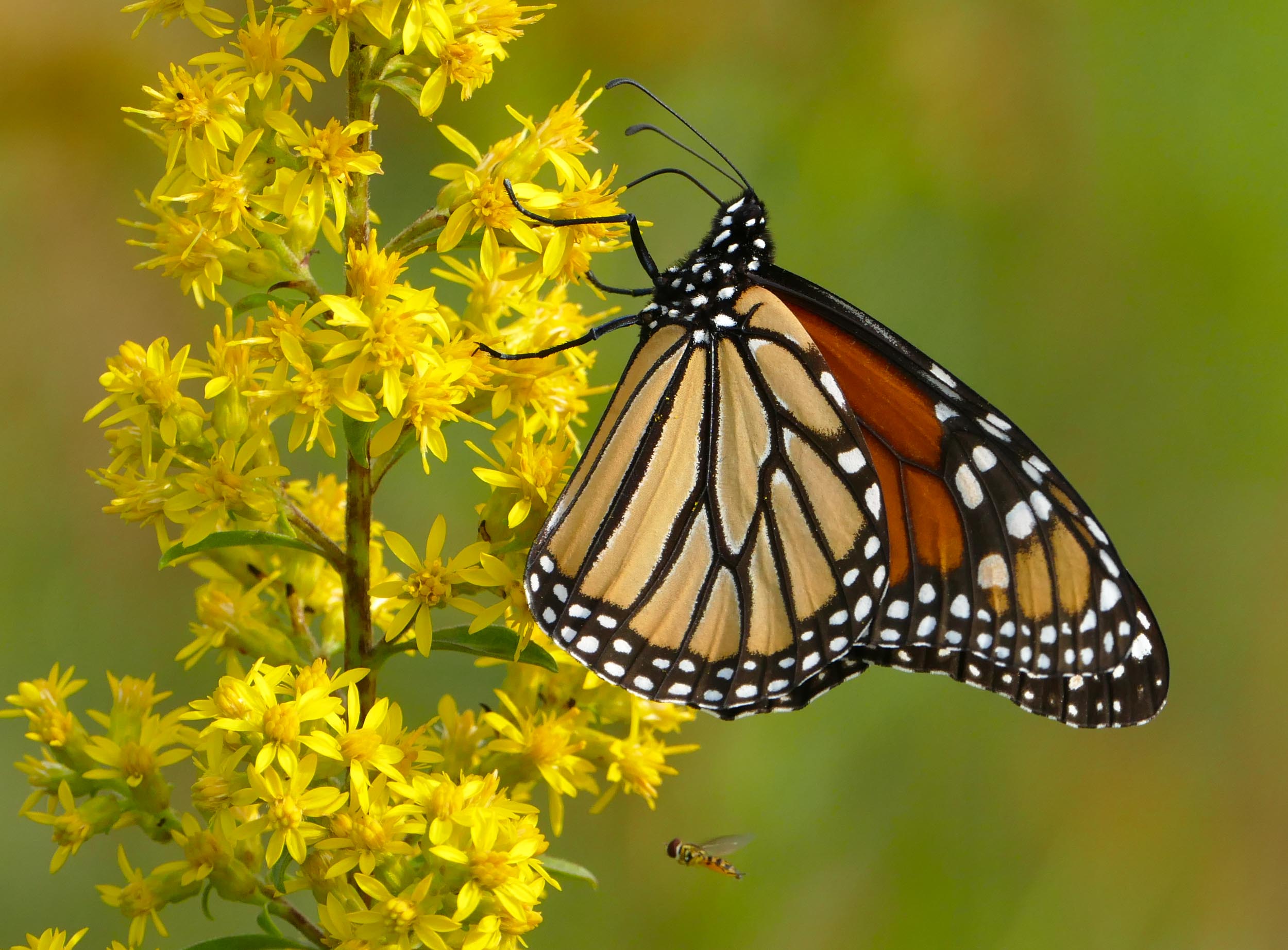 Showy Goldenrod is definitely a late summer favorite – this one has Bumblebees, a Flower Fly, Goldenrod Soldier Beetles, and a Corn Earworm Moth 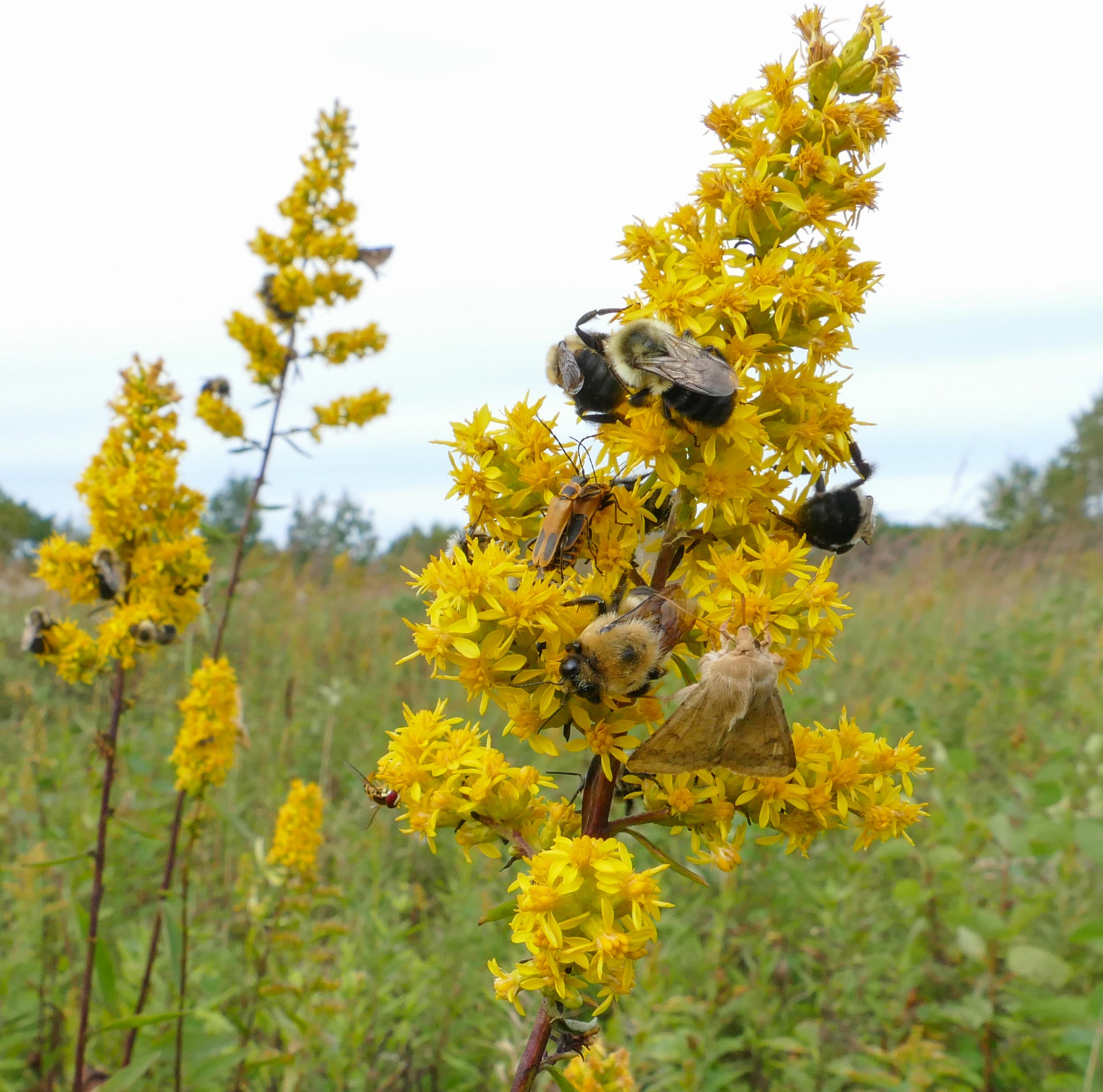 Painted Lady butterflies migrate at this time of year too, and they cluster on some of the same flowers as the Monarchs.  Here’s Rough Blazing Star with both Monarchs and Painted Ladies. 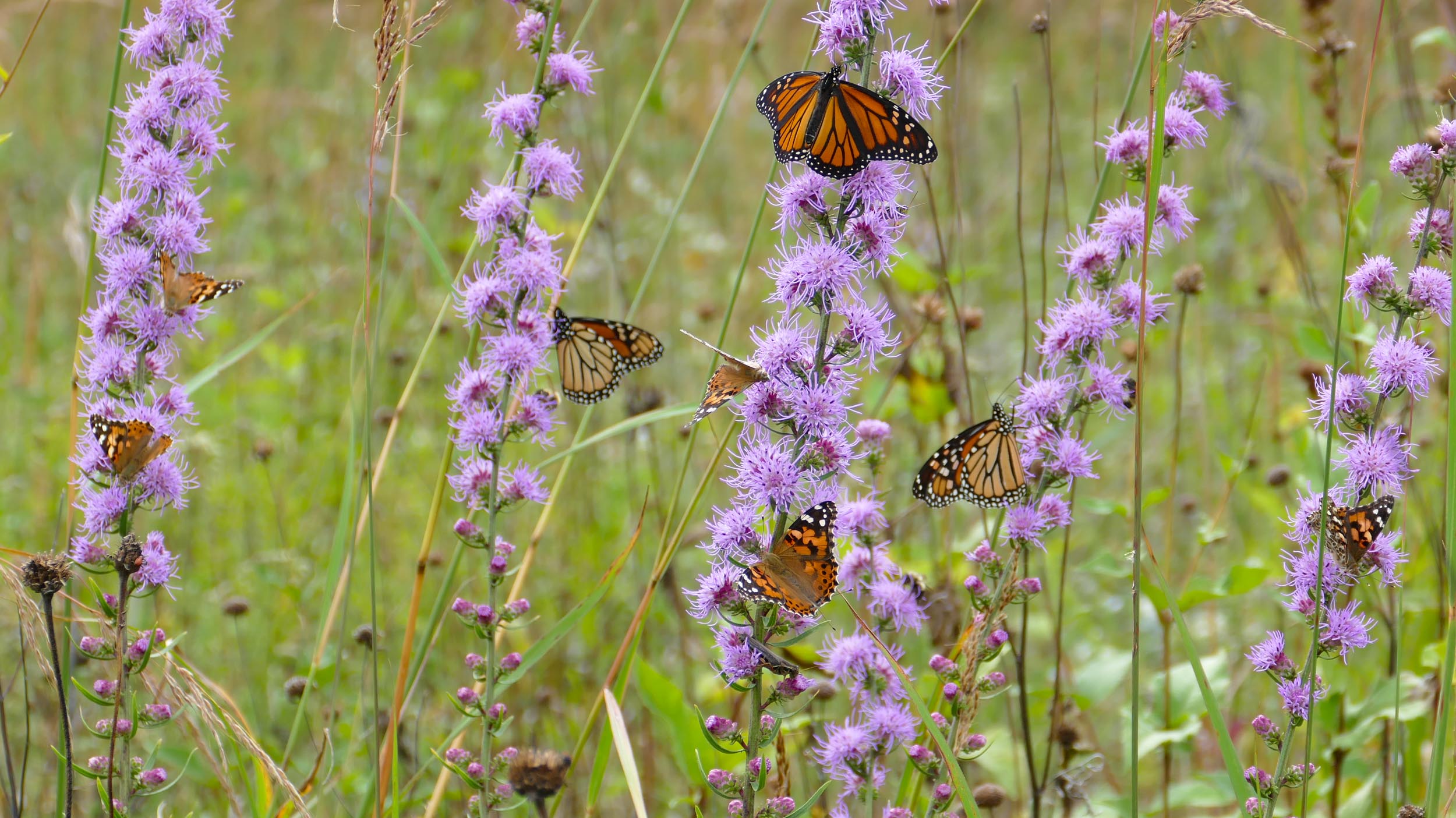 We’ve seen two migrating Red-headed Woodpeckers in the last few weeks.  This one is a juvenile, on a dead tree in one of the savanna remnants. 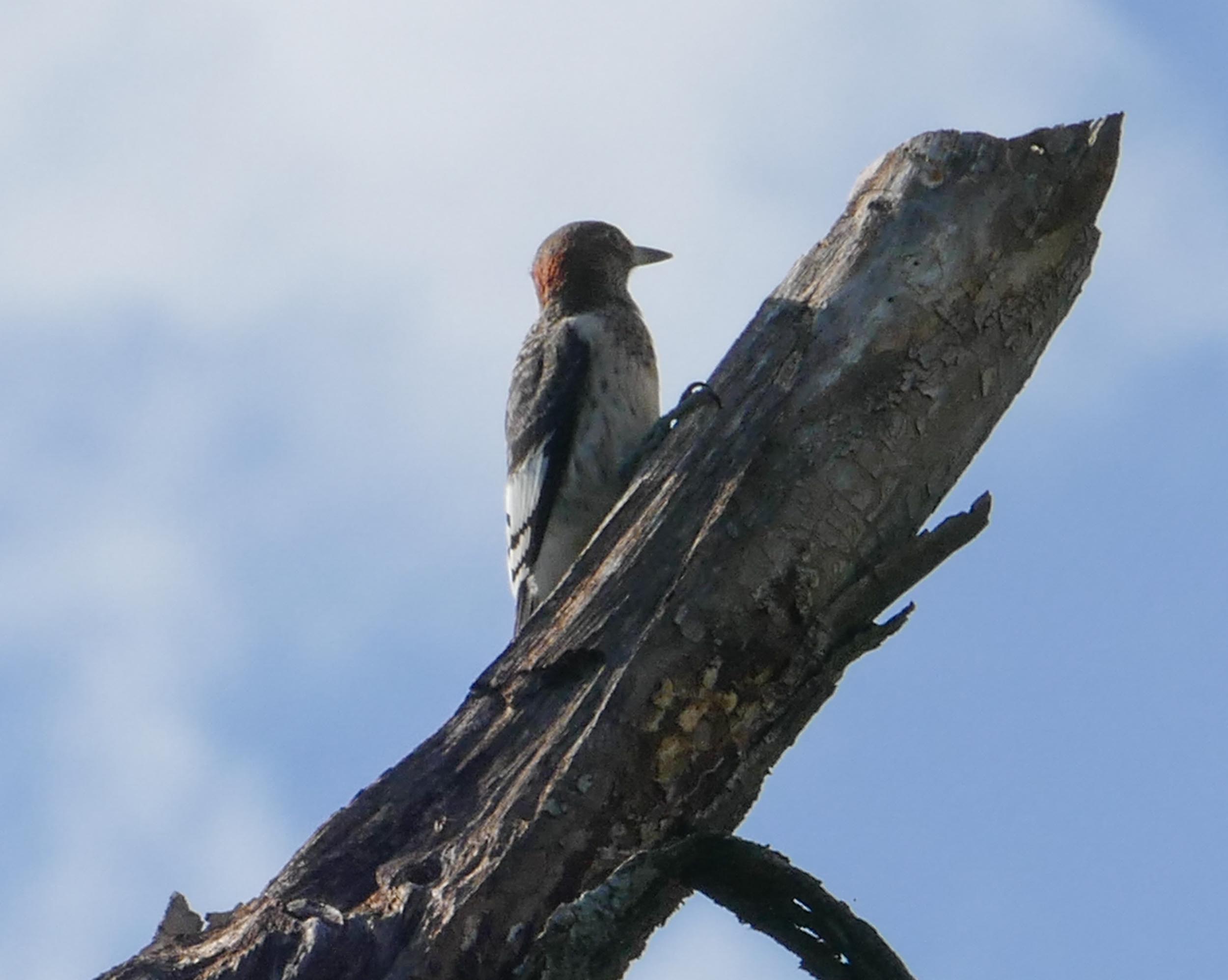 Green Darner dragonflies rest on plant stems, or along the paths, and if they’re disturbed, or if the sun comes out, they fly up in huge swarms to hunt insects above the prairies.  This one was resting on a goldenrod stalk. 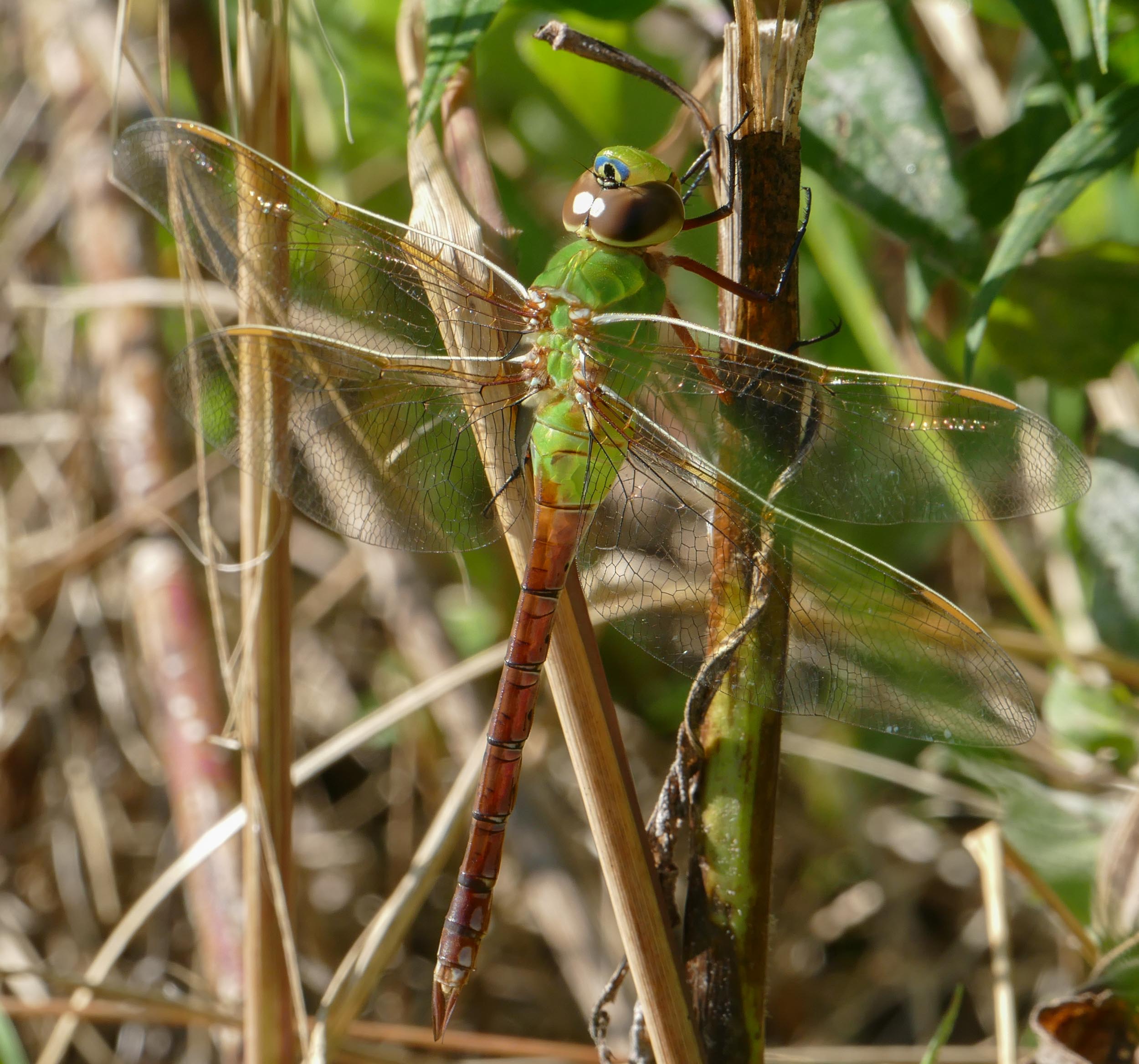 Northern Flower moths emerge at this time of year to live their short adult lives – they’re only around as adults for about a week.  They live on Sumac Prairie – our largest bluff prairie remnant.  These two were sharing an Aromatic Aster flower. 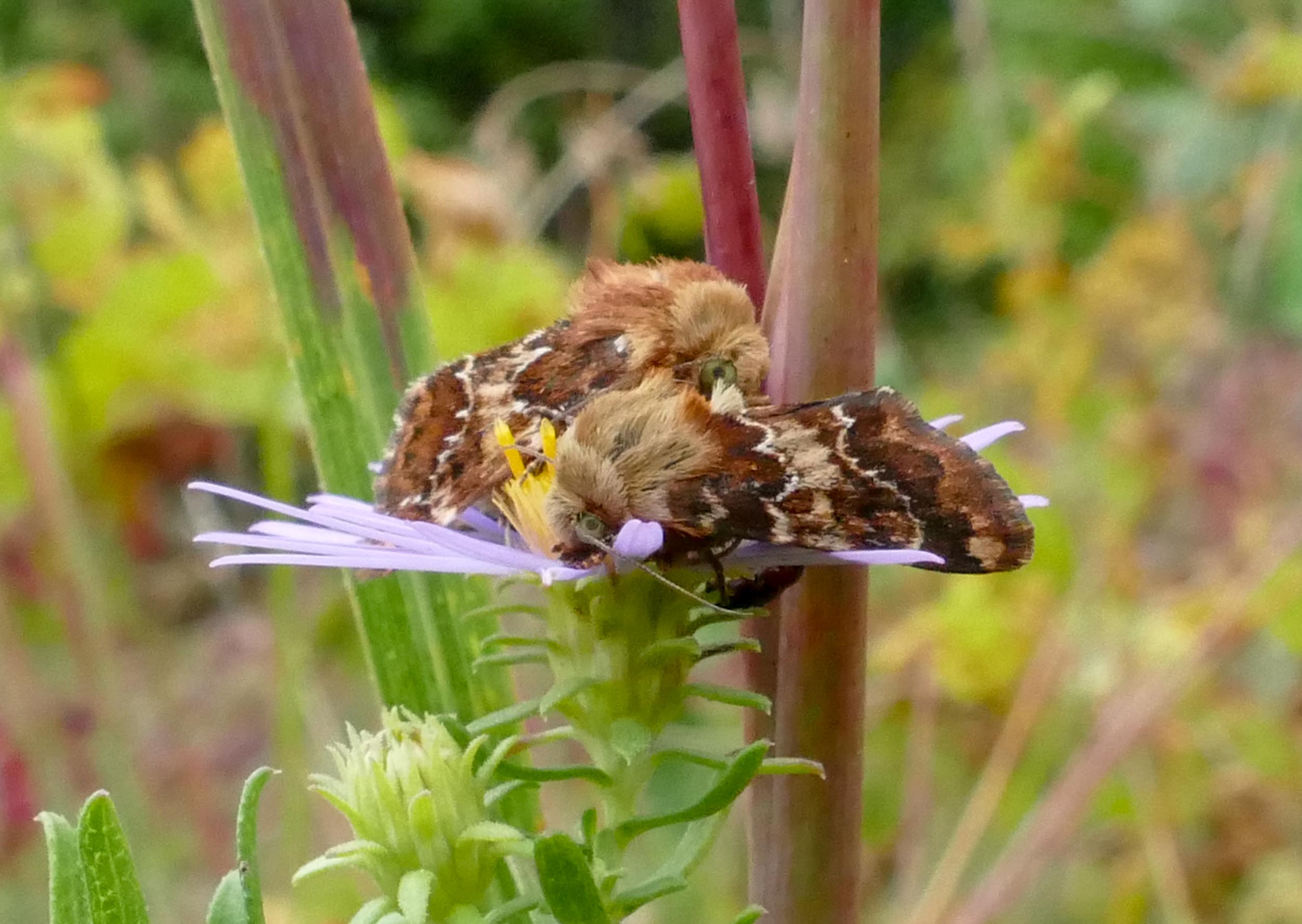 Here are some end of summer flowers.

Blue Lobelia along the edge of the driveway 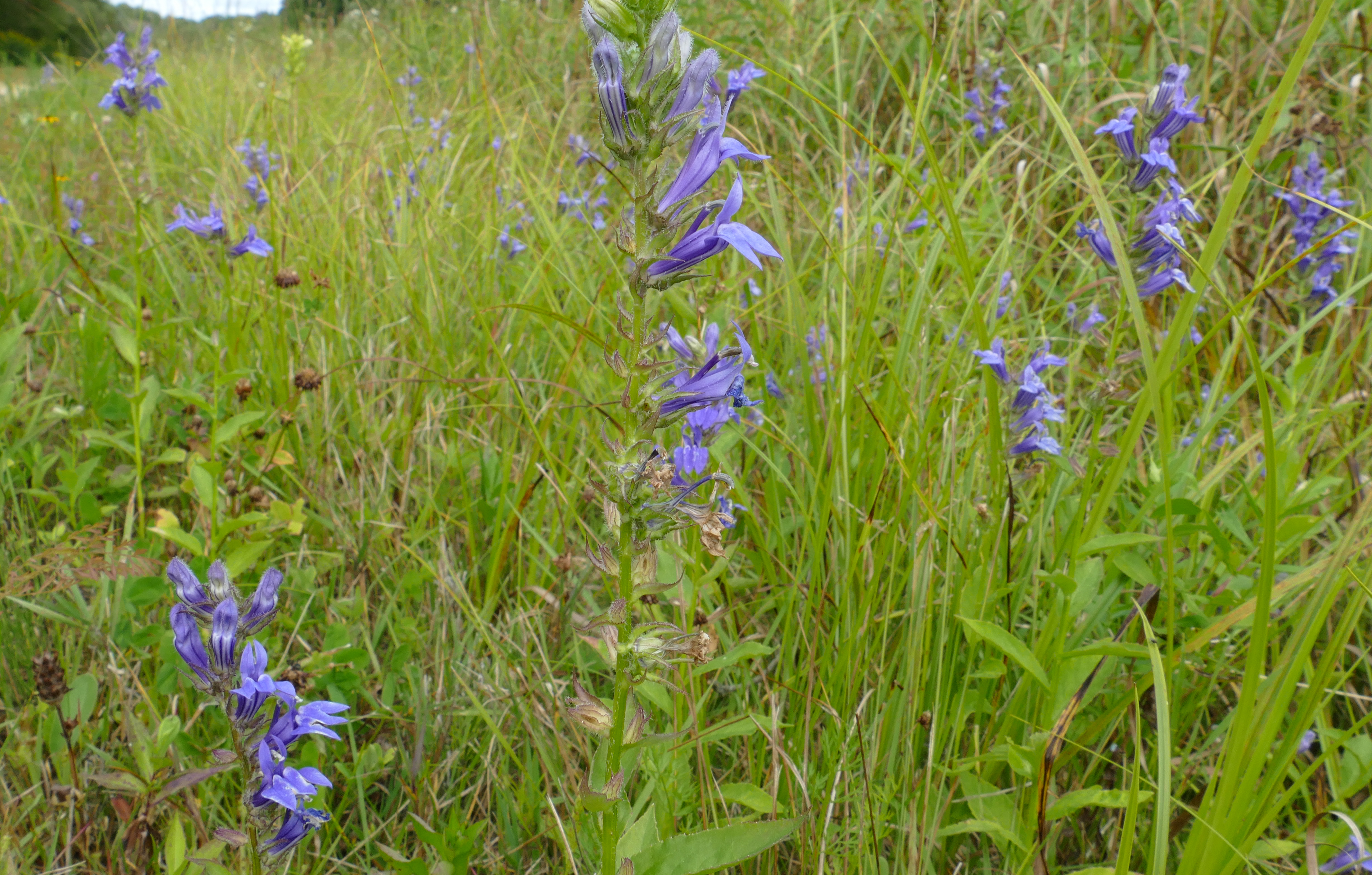 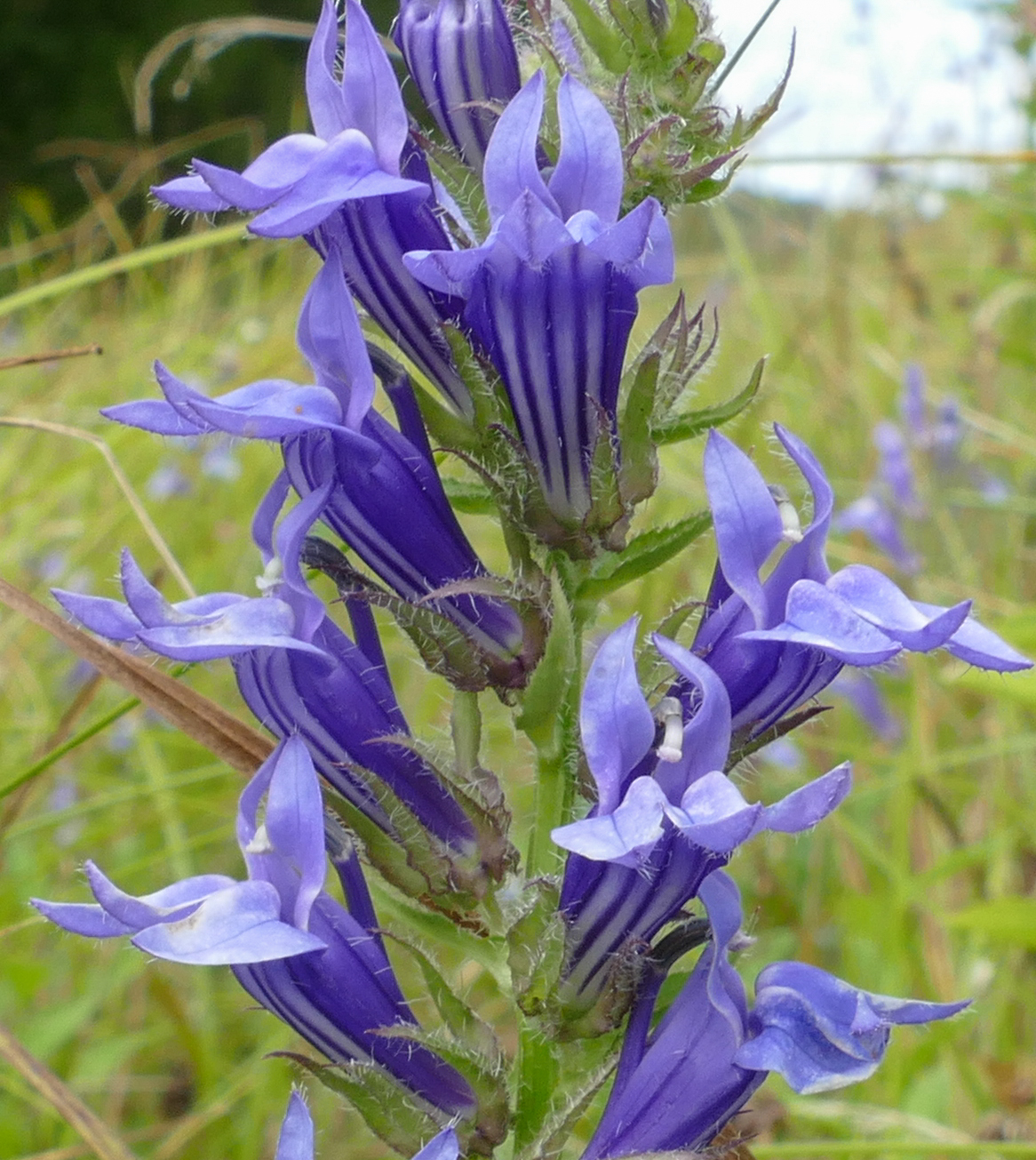 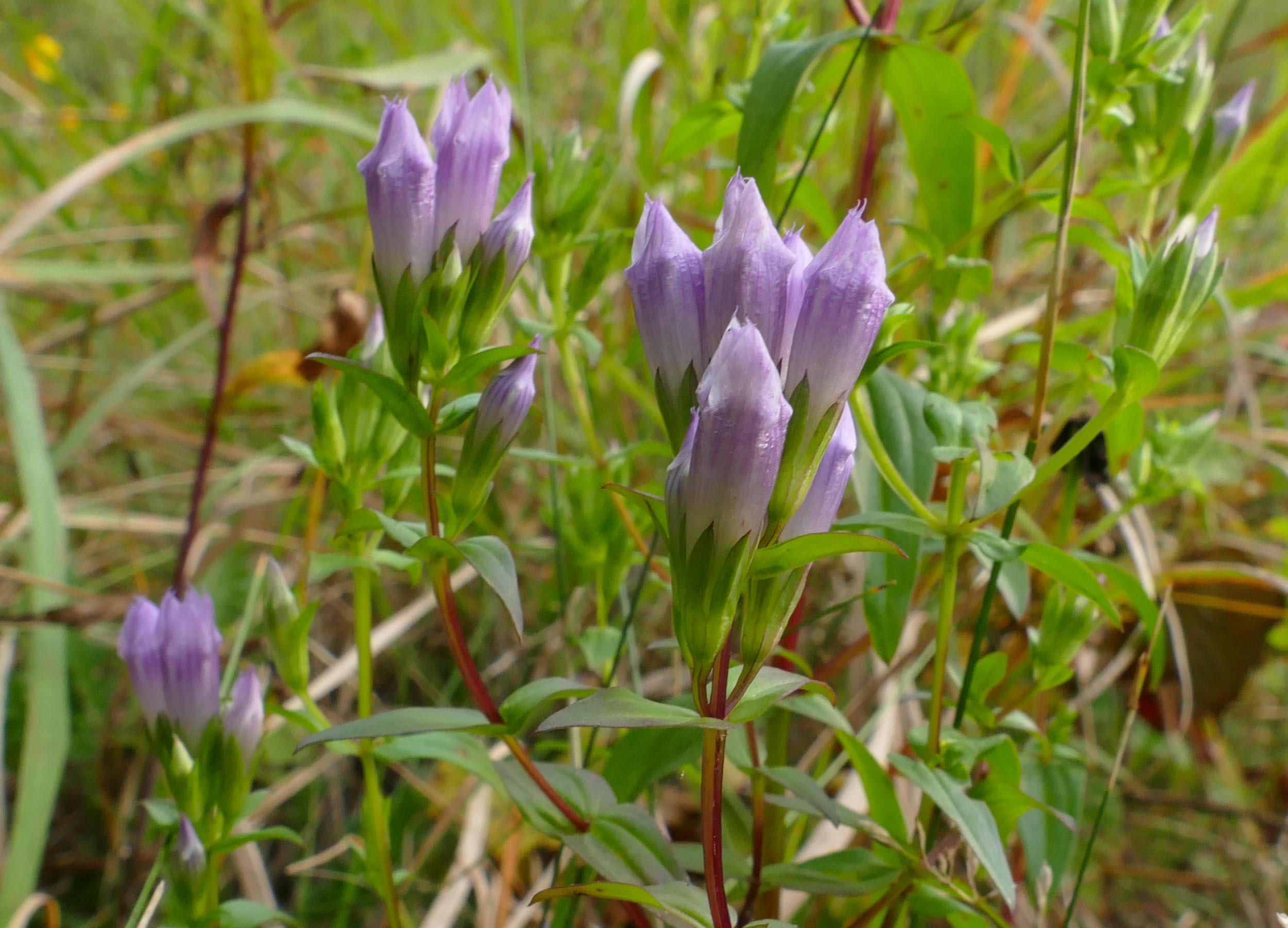 Swamp Thistle – one of the most beautiful of our native thistles. 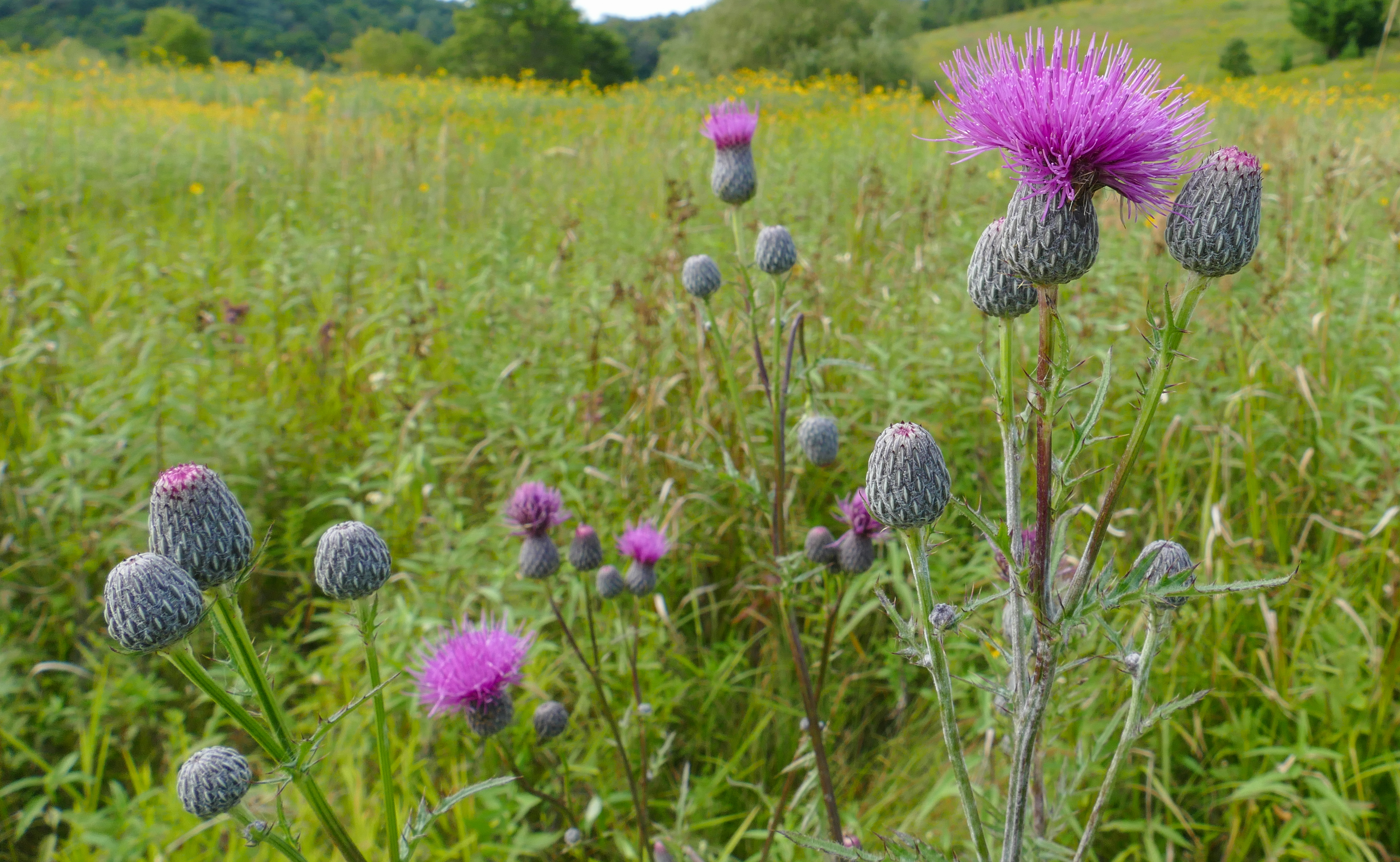 Rough Blazing Star usually has magenta flowers, but sometimes has white ones.  This year Buffalo Ridge Prairie has quite a few white ones. 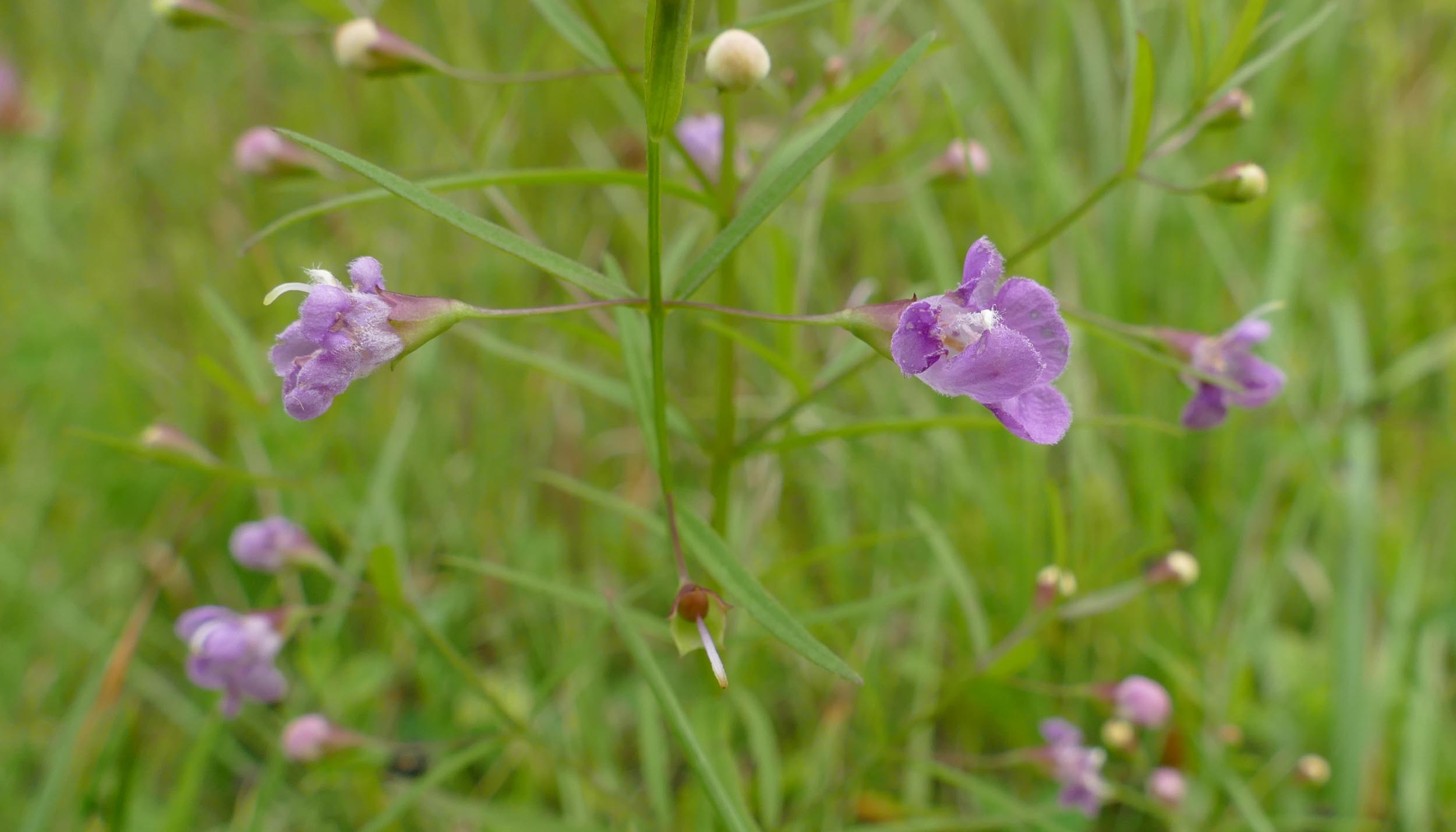 This is an area that we cleared of brush a few years ago.  The prairie/savanna plants are slowly recovering.  Right now it’s full of blooming white asters. 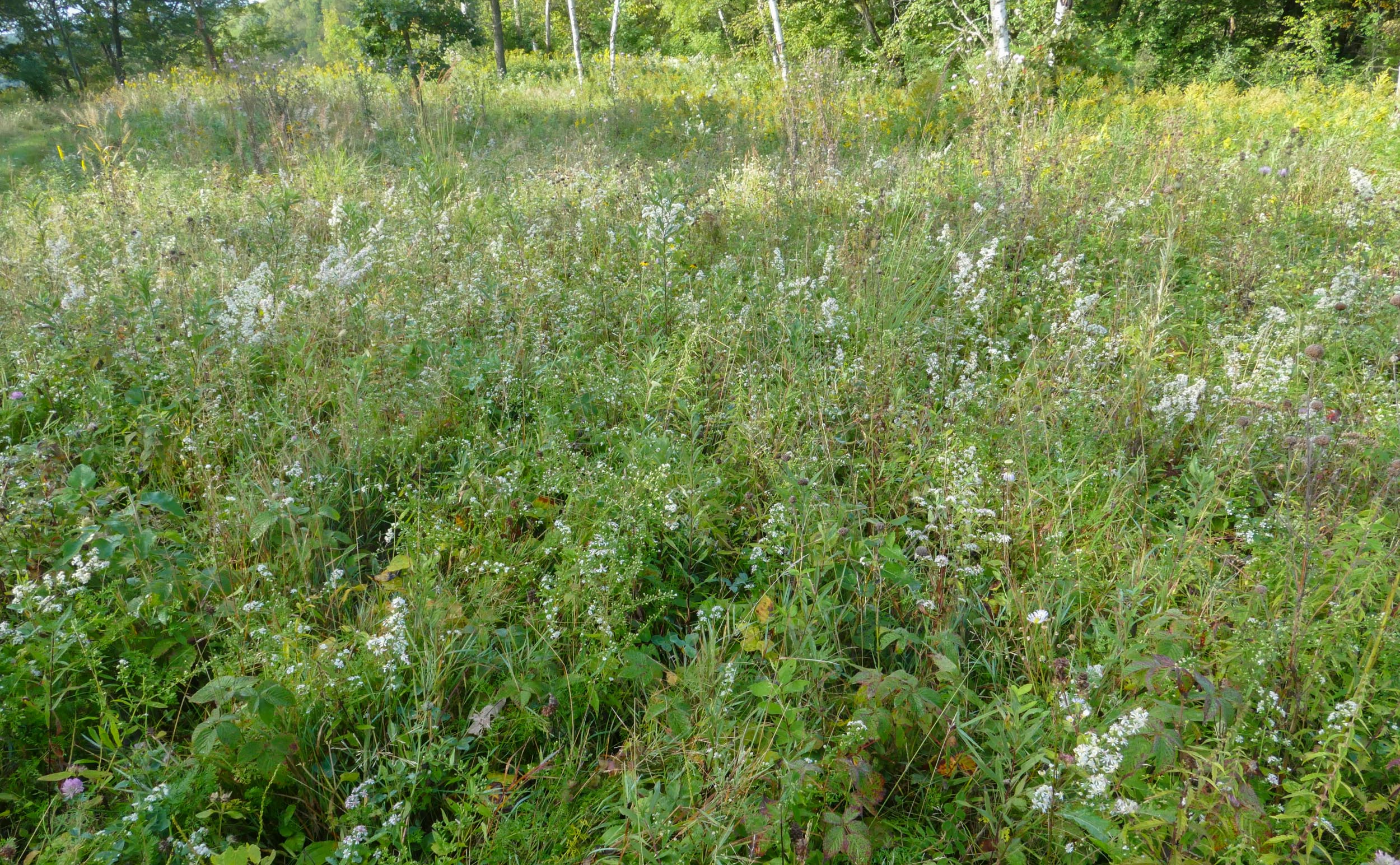 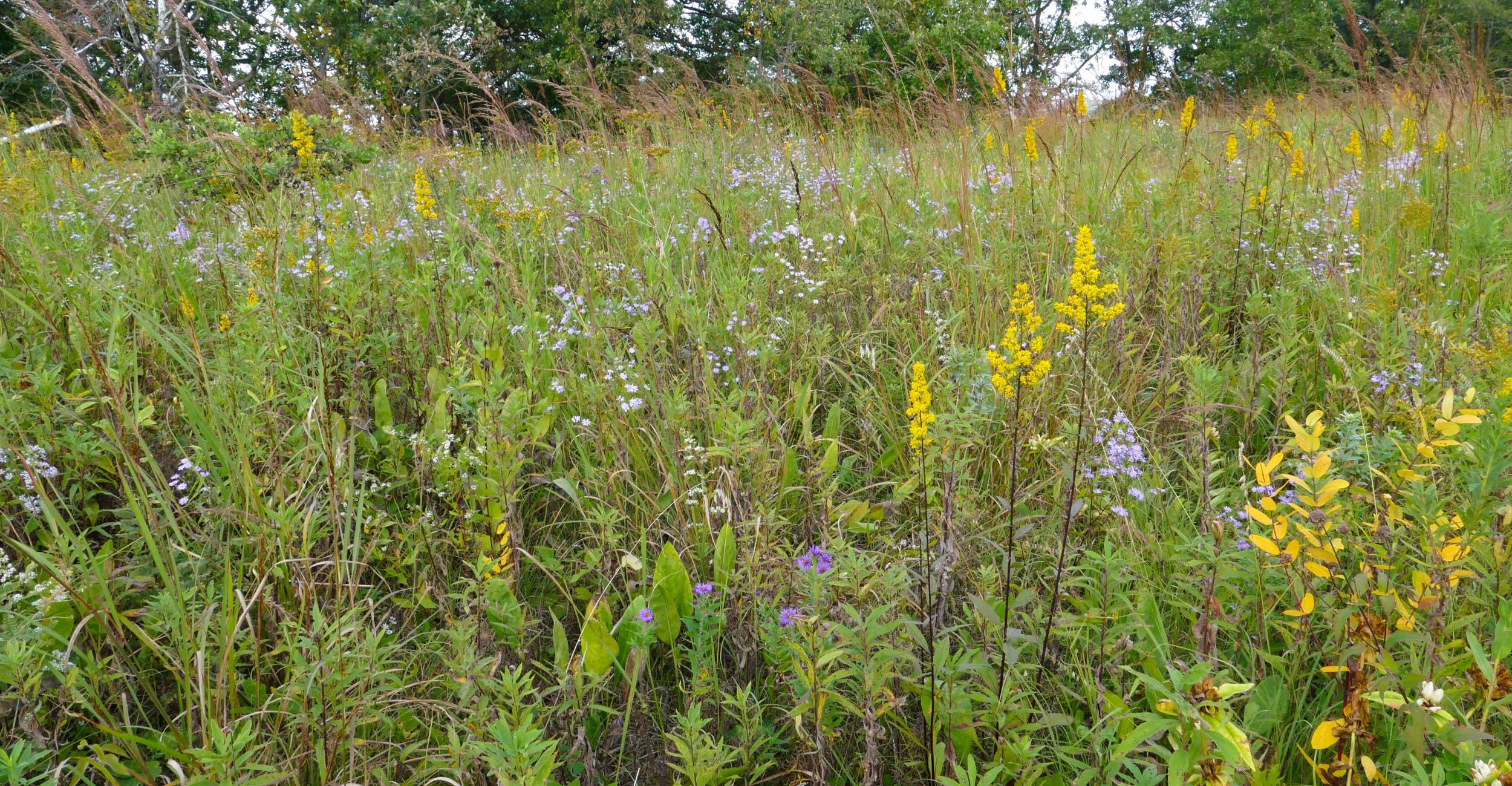 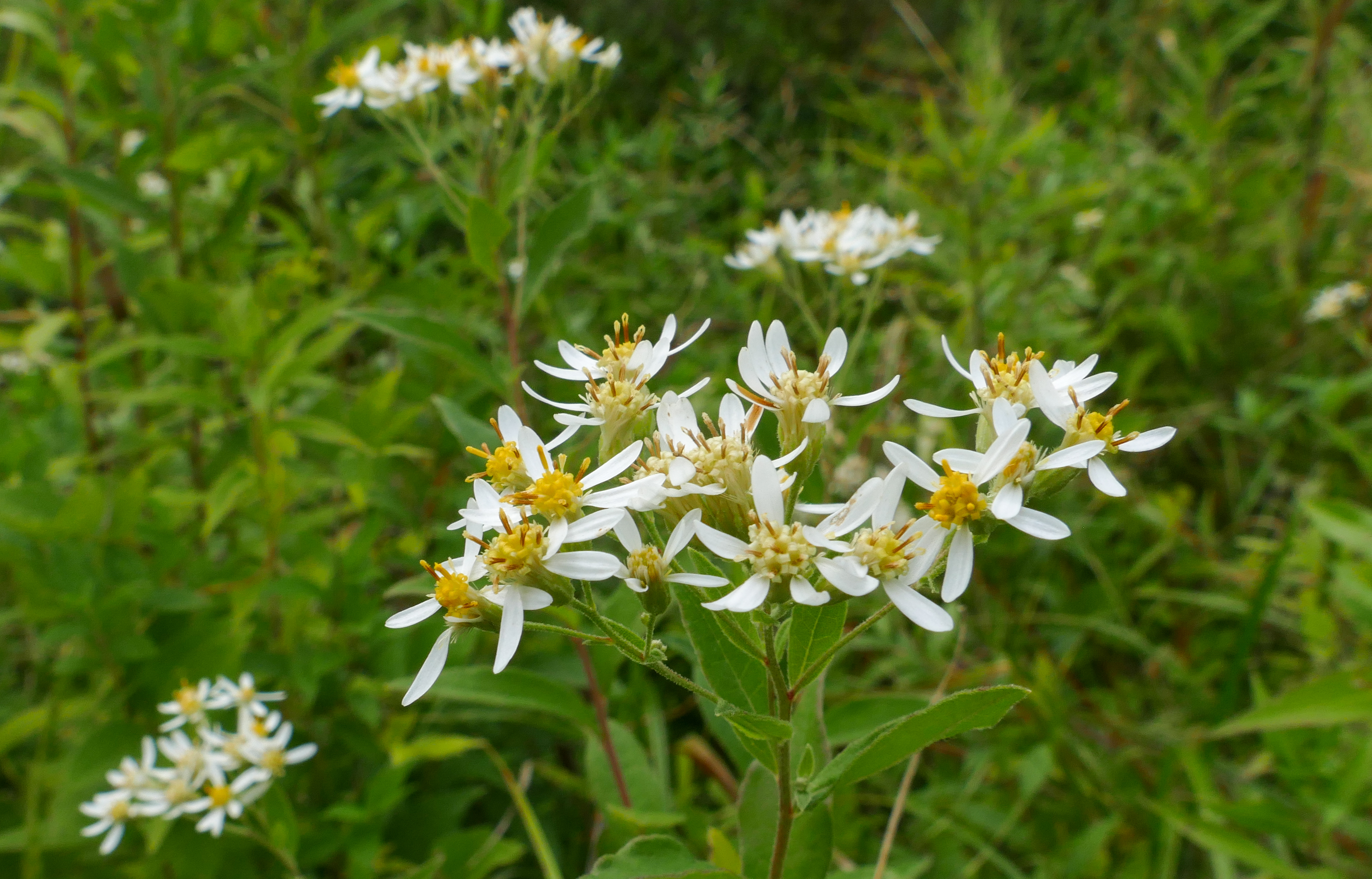 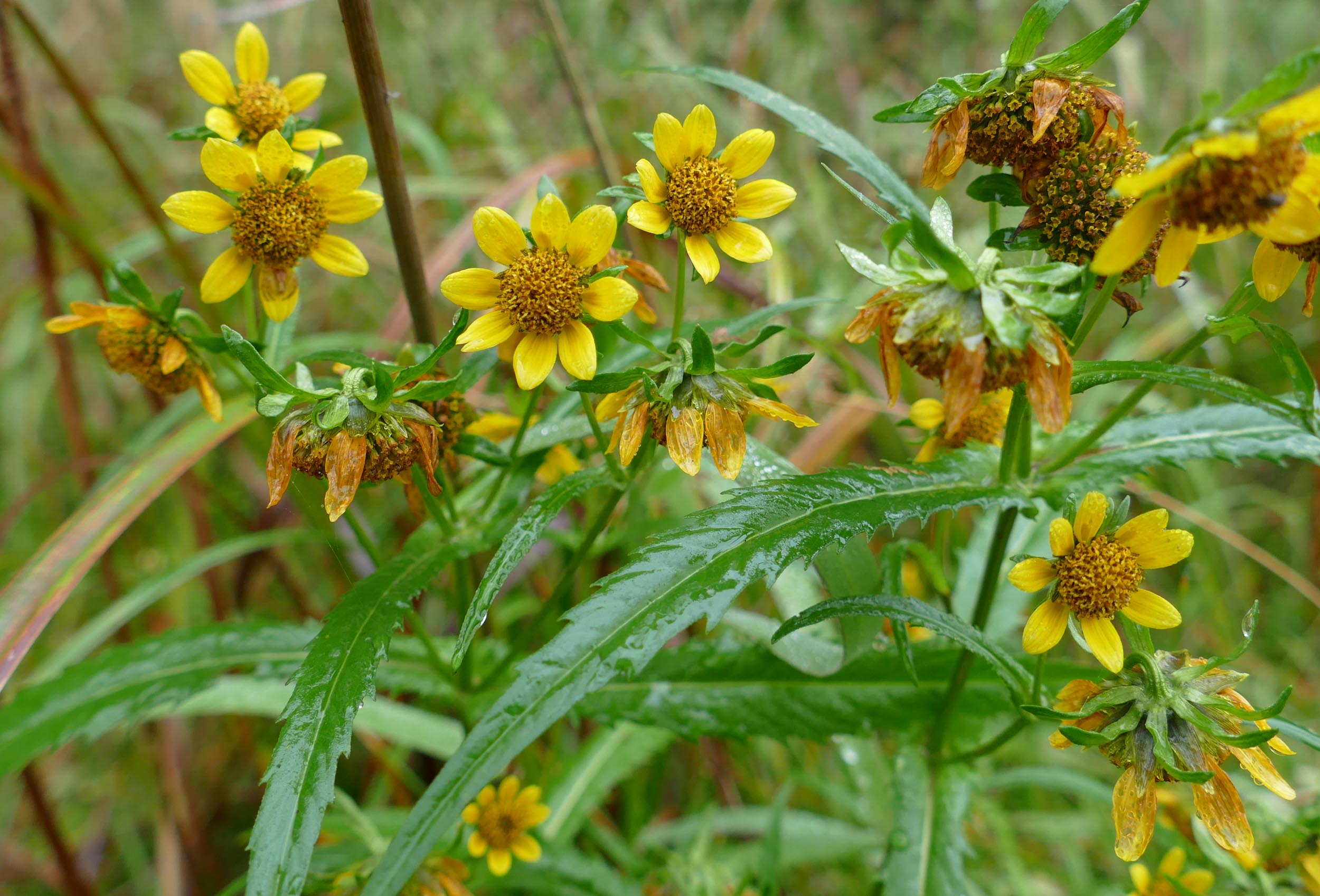 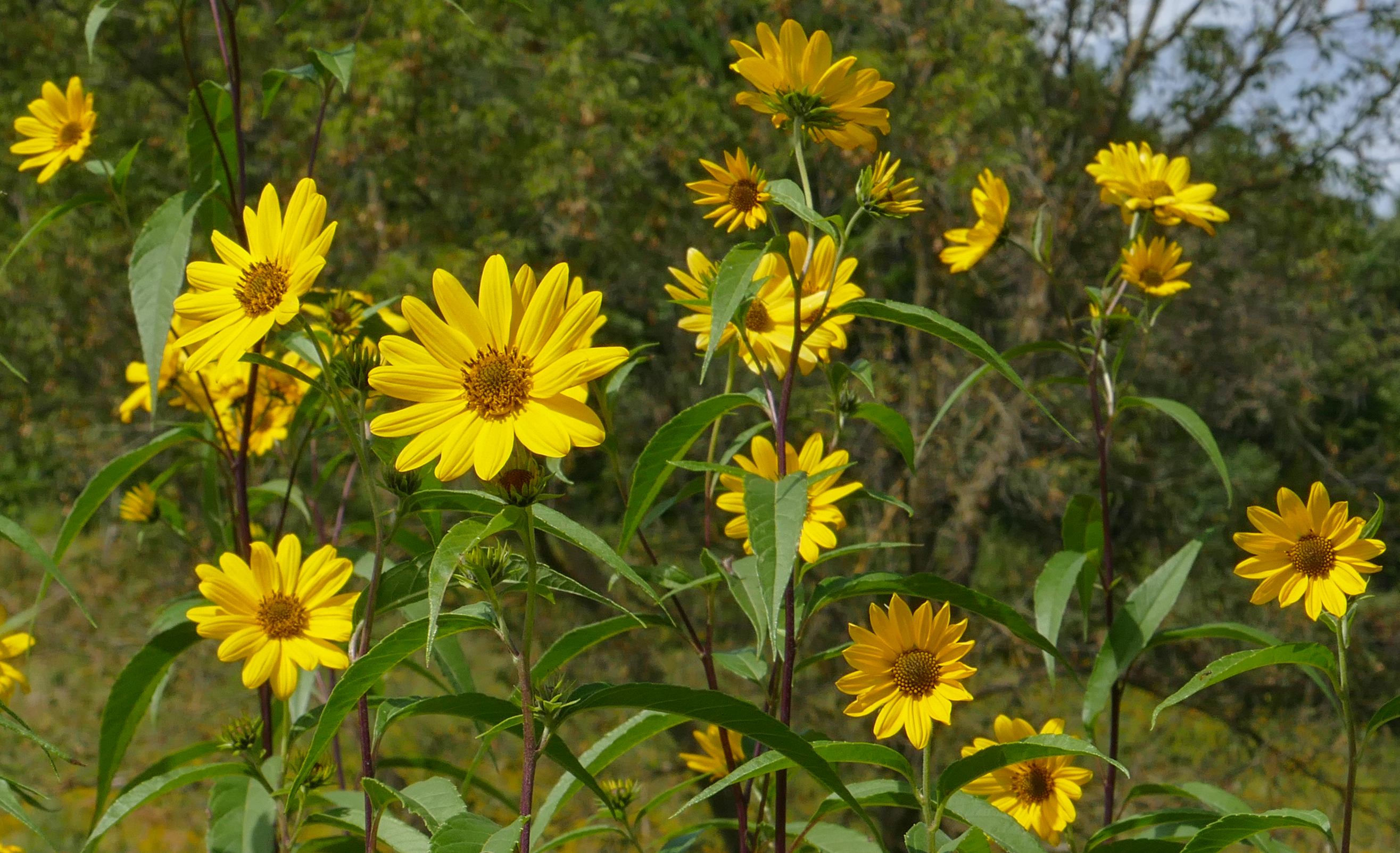 I raised a couple of Common Buckeye butterflies from caterpillars I found along the driveway. 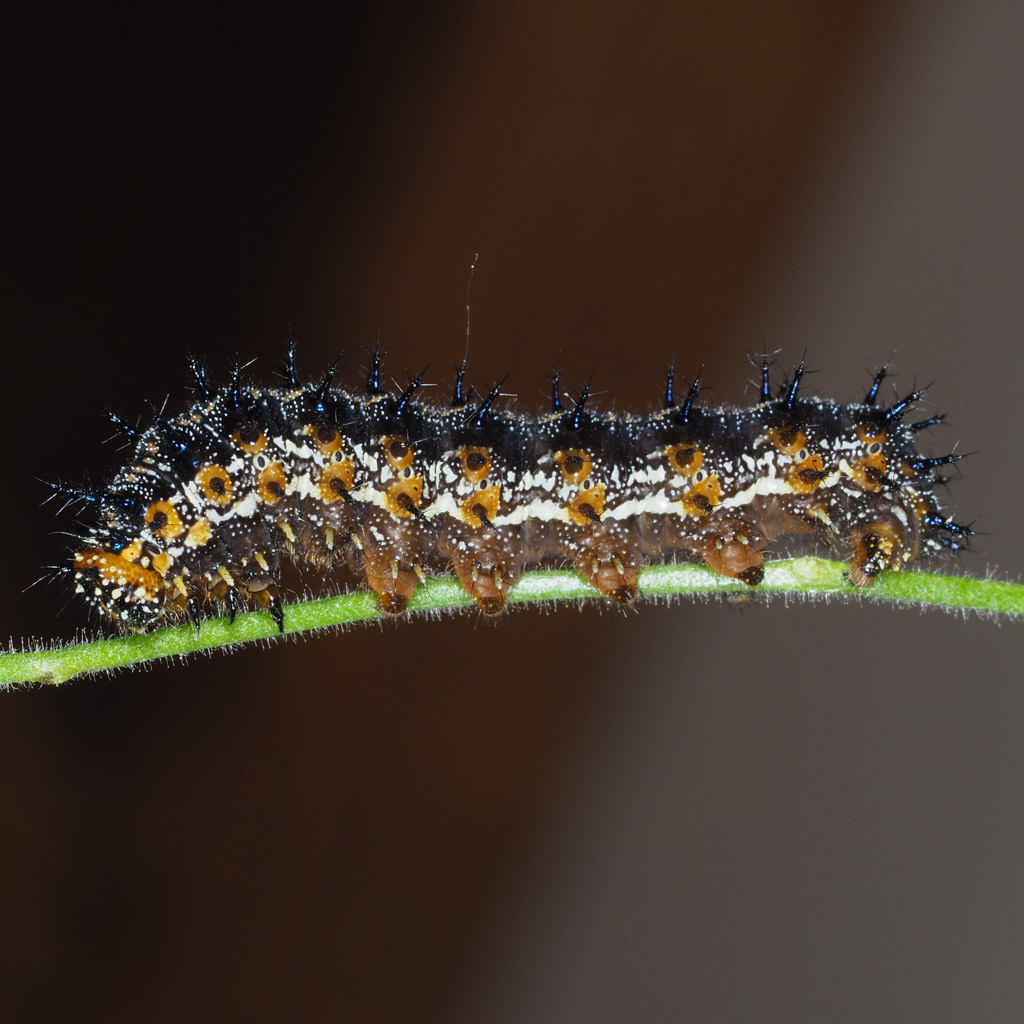 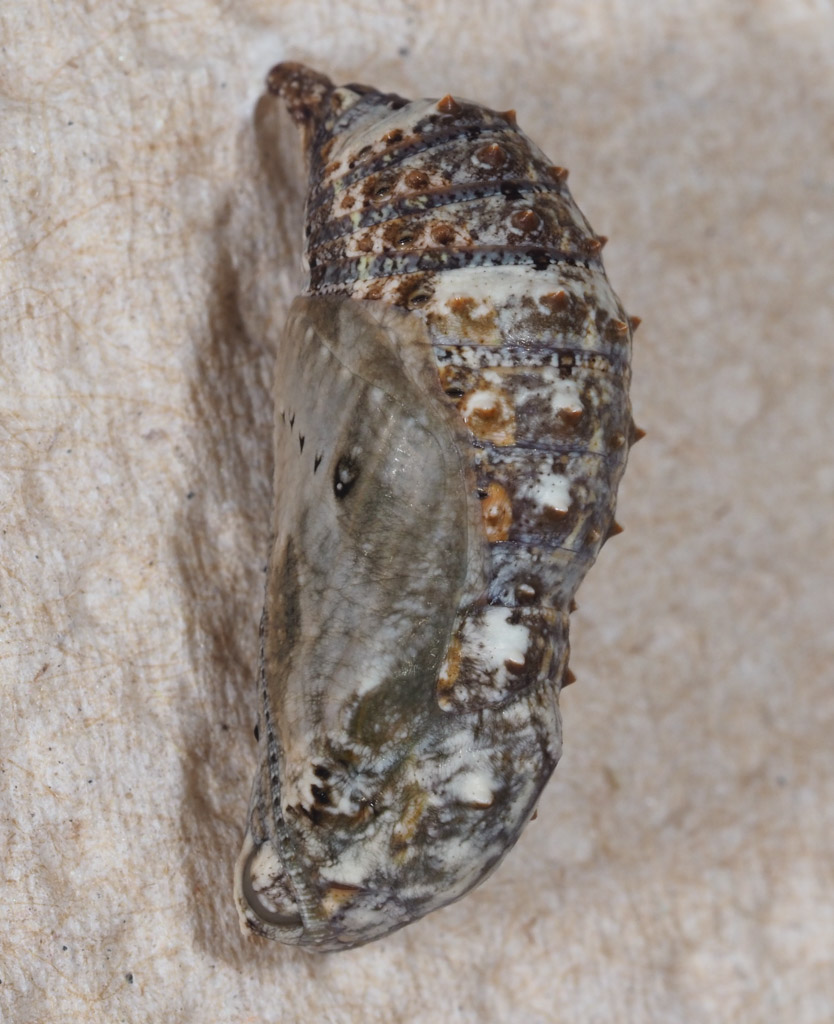 An adult Common Buckeye sitting on my arm before being released 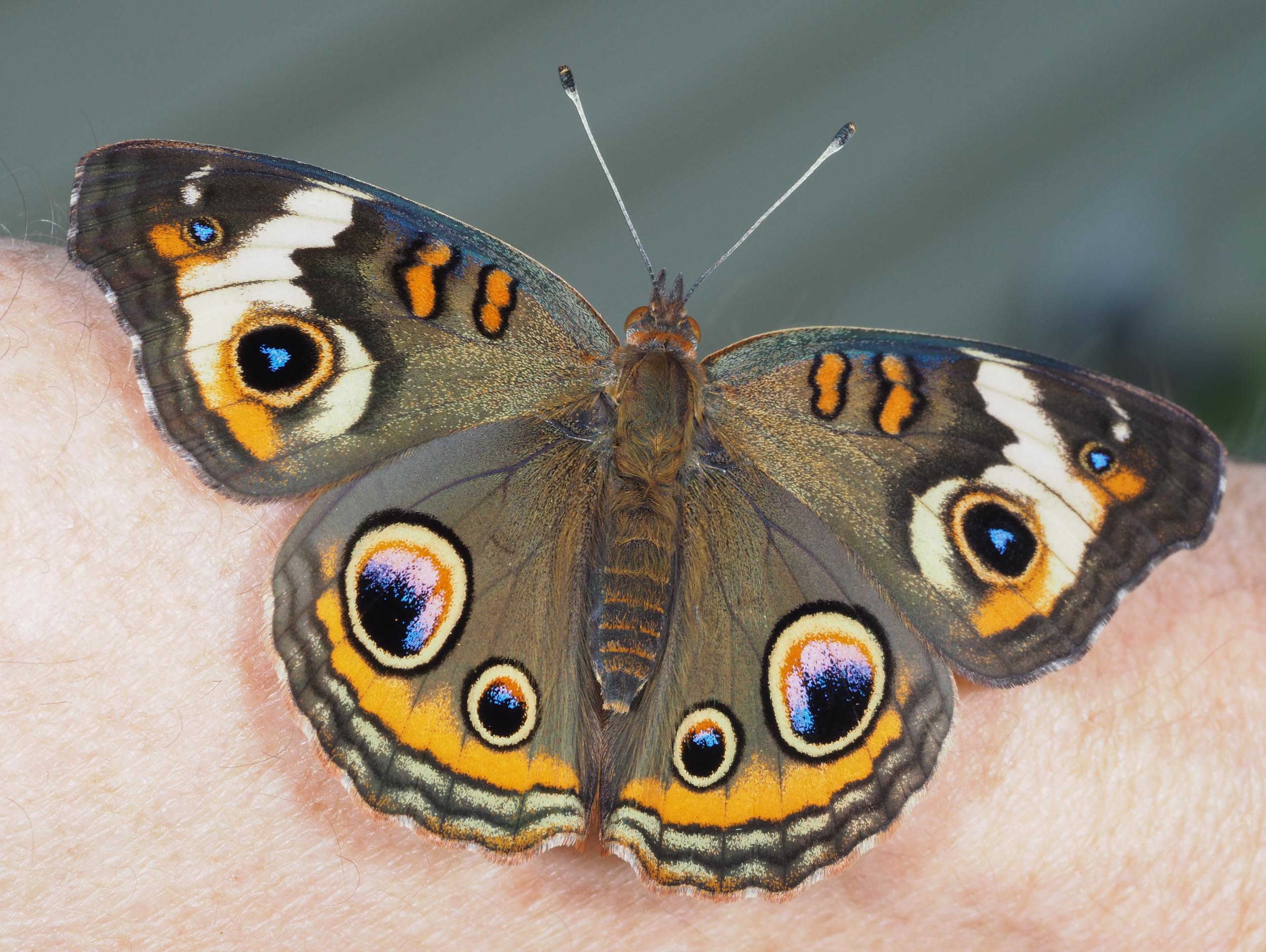 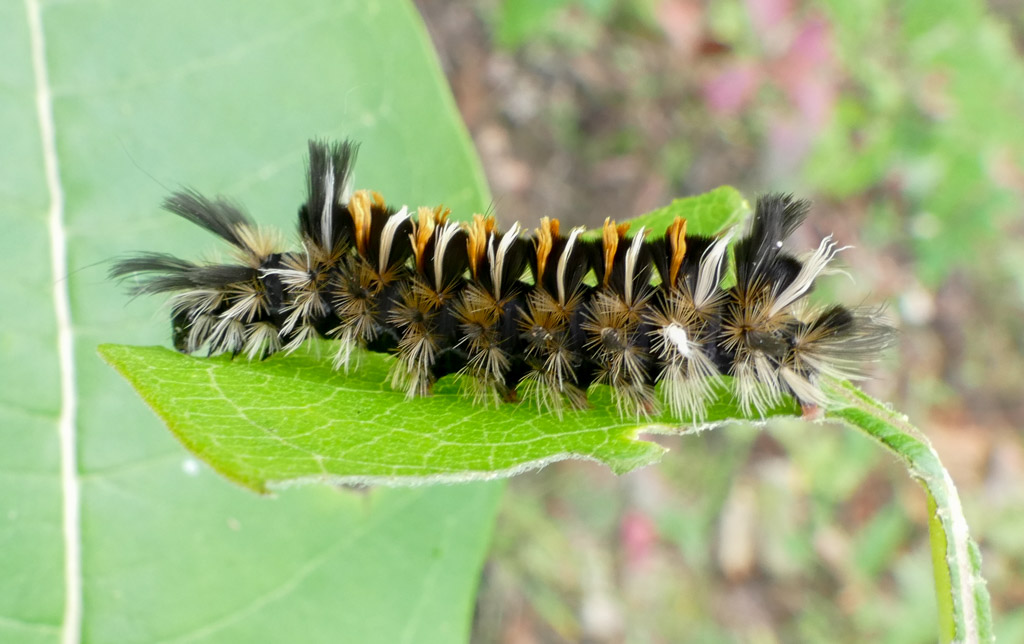 Bear on the trail camera 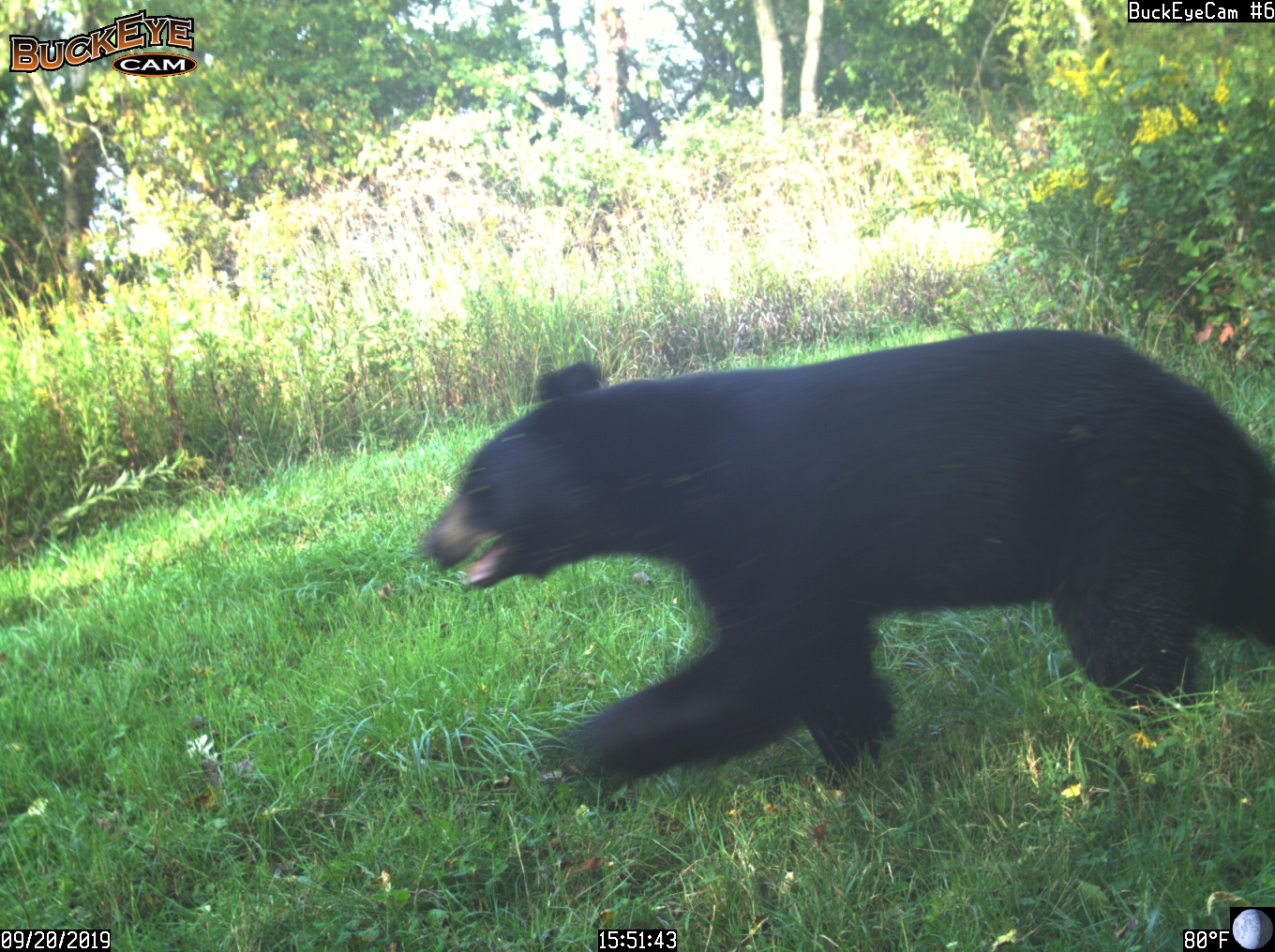 Even the deer find the raccoons fun to watch. 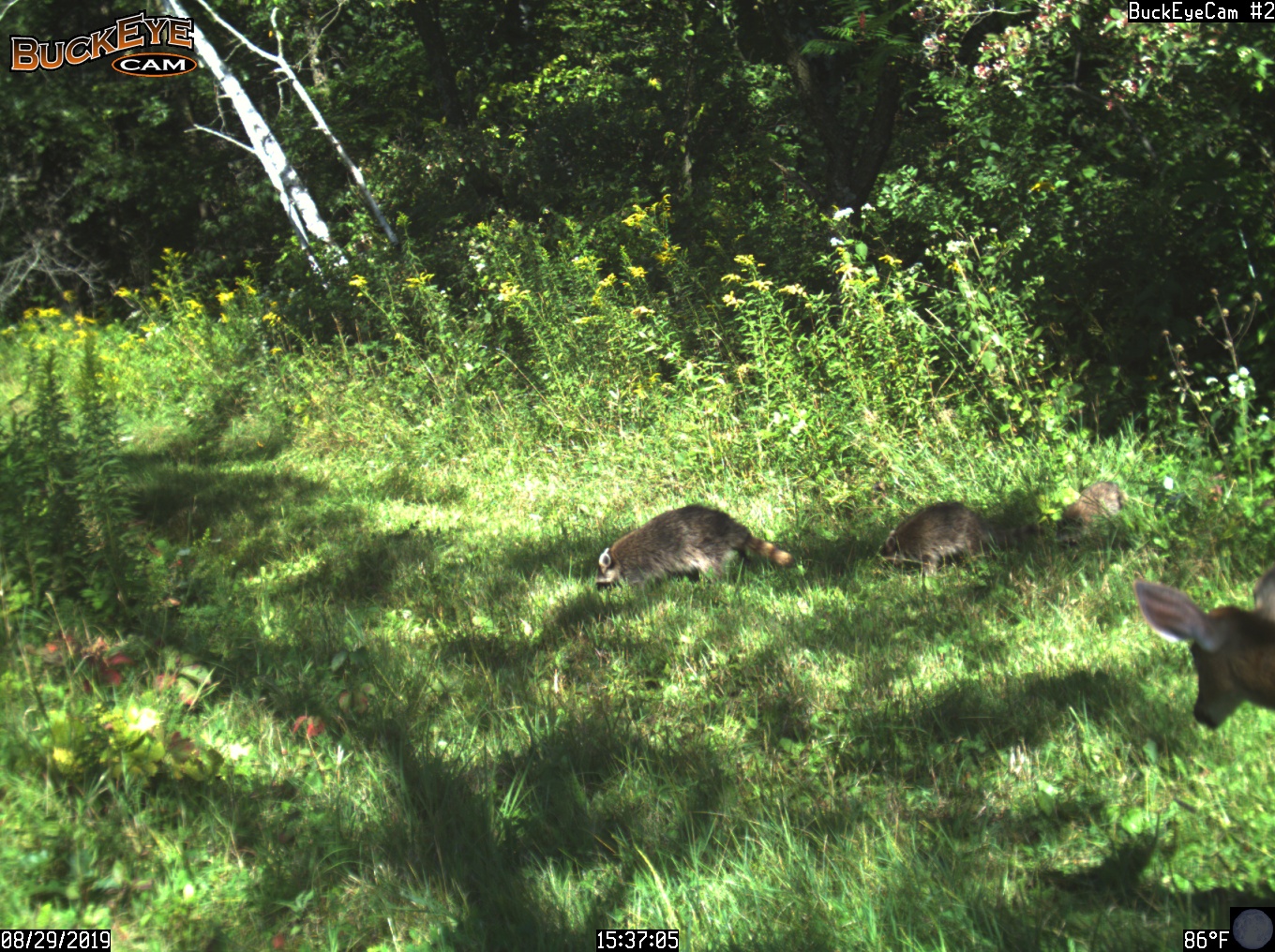 Indian Pipe is an odd, plant that has no chlorophyll – it’s parasitic on fungi.   I often find the dried flower stalks, but usually miss the flowers.  These were in an overgrown savanna on the edge of one of our bluff prairie remnants. 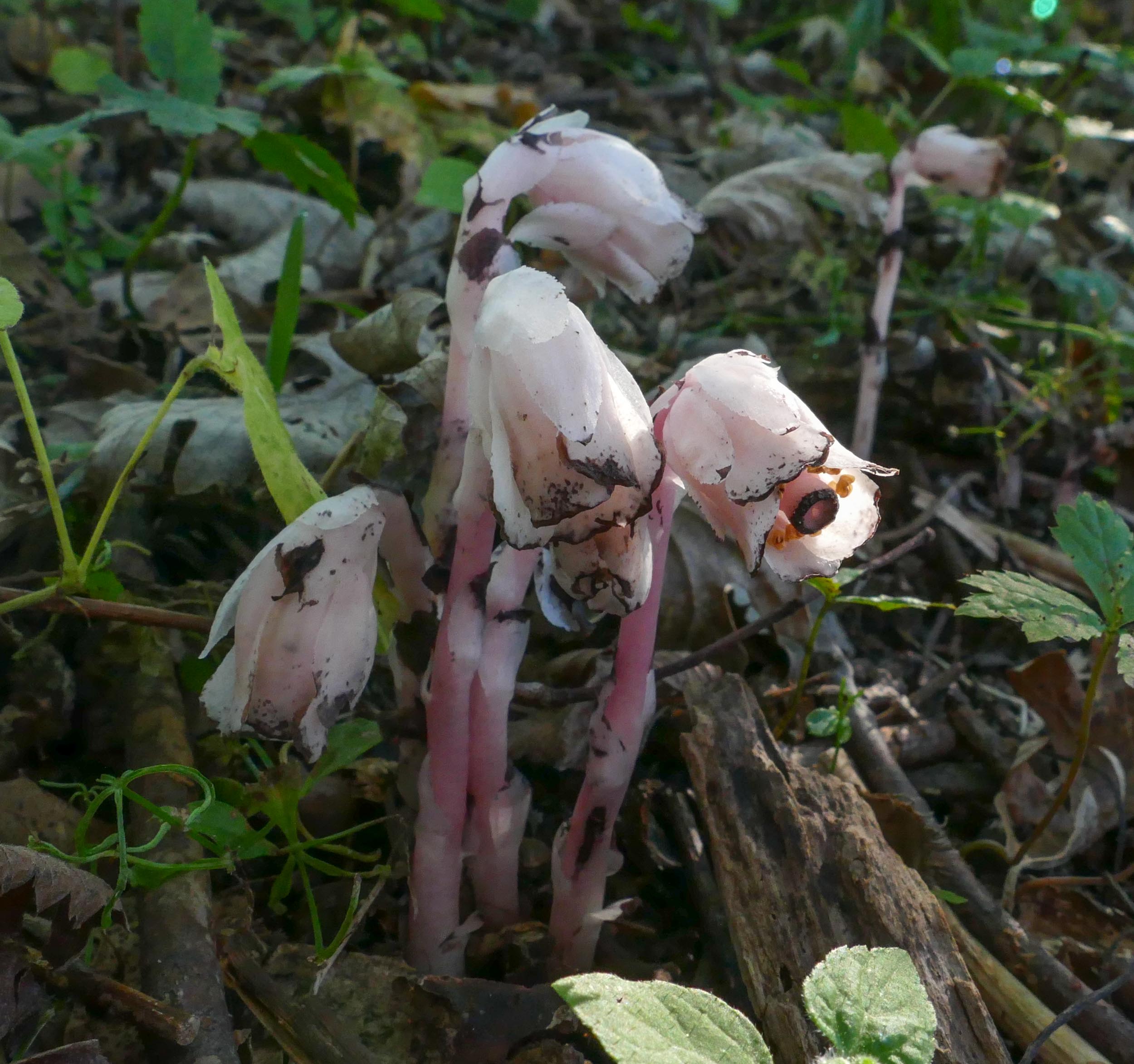 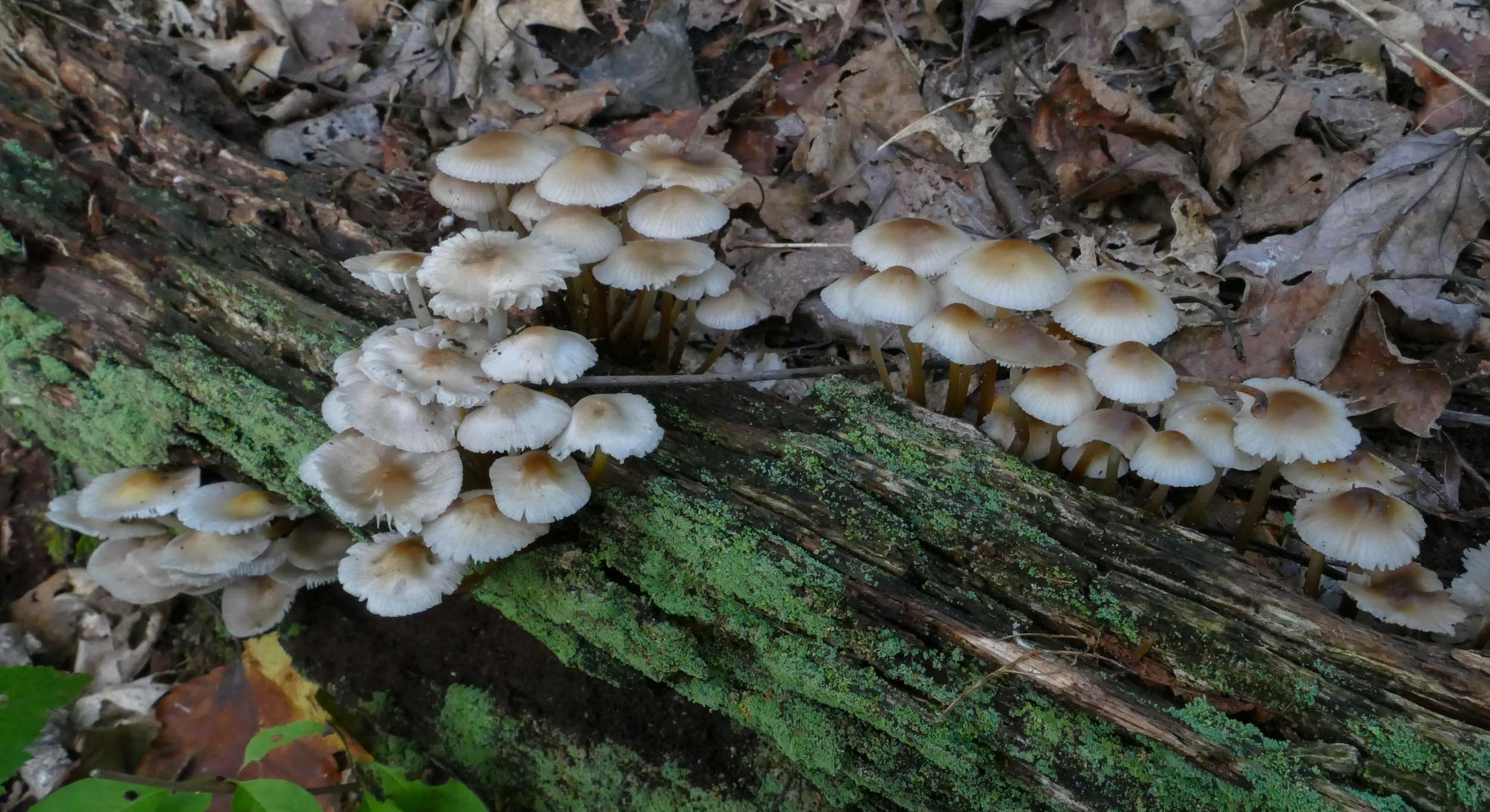 There haven’t been many good moth nights, and the nights are so cold that when I do see moths, they’re very cooperative. 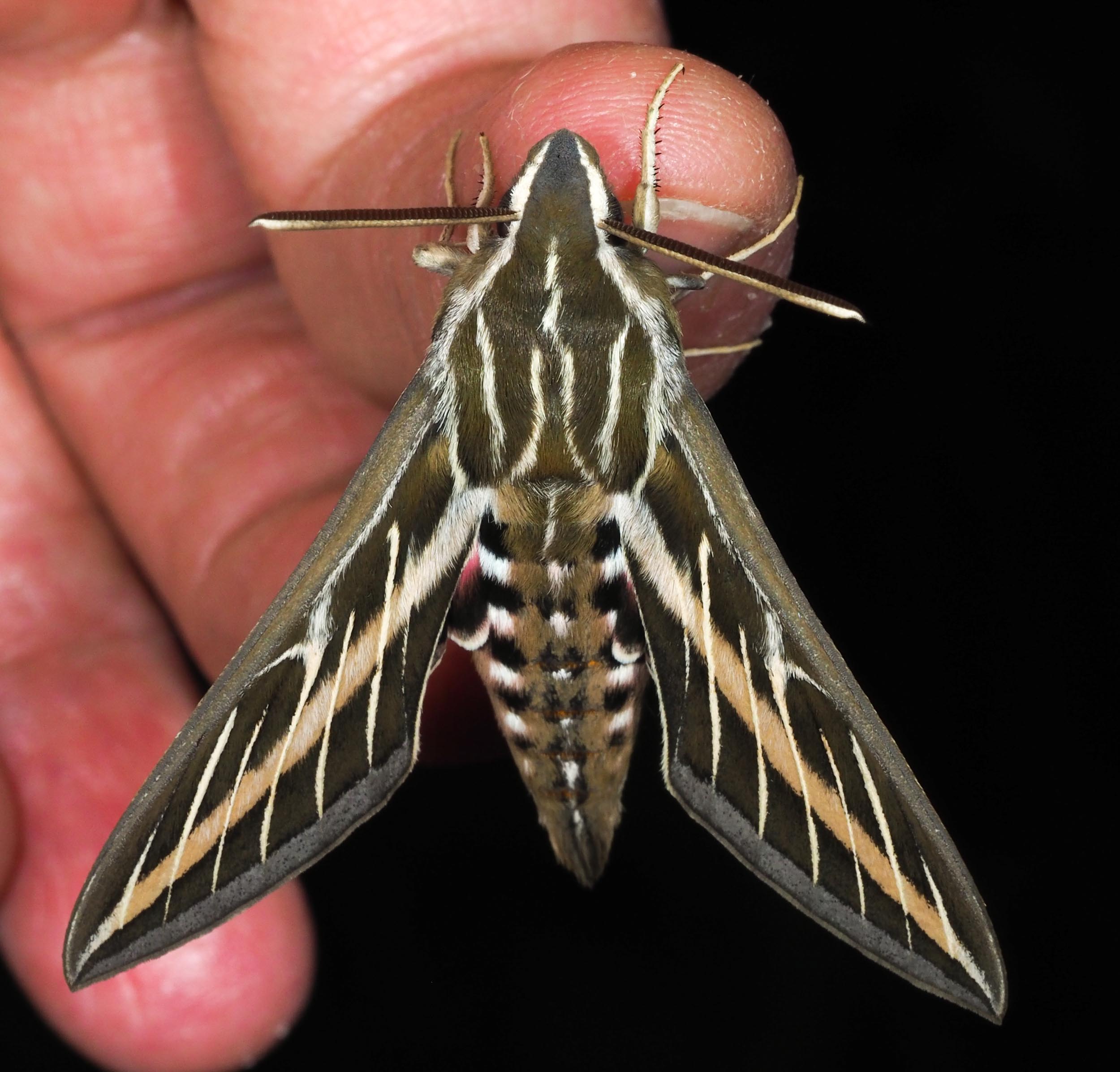 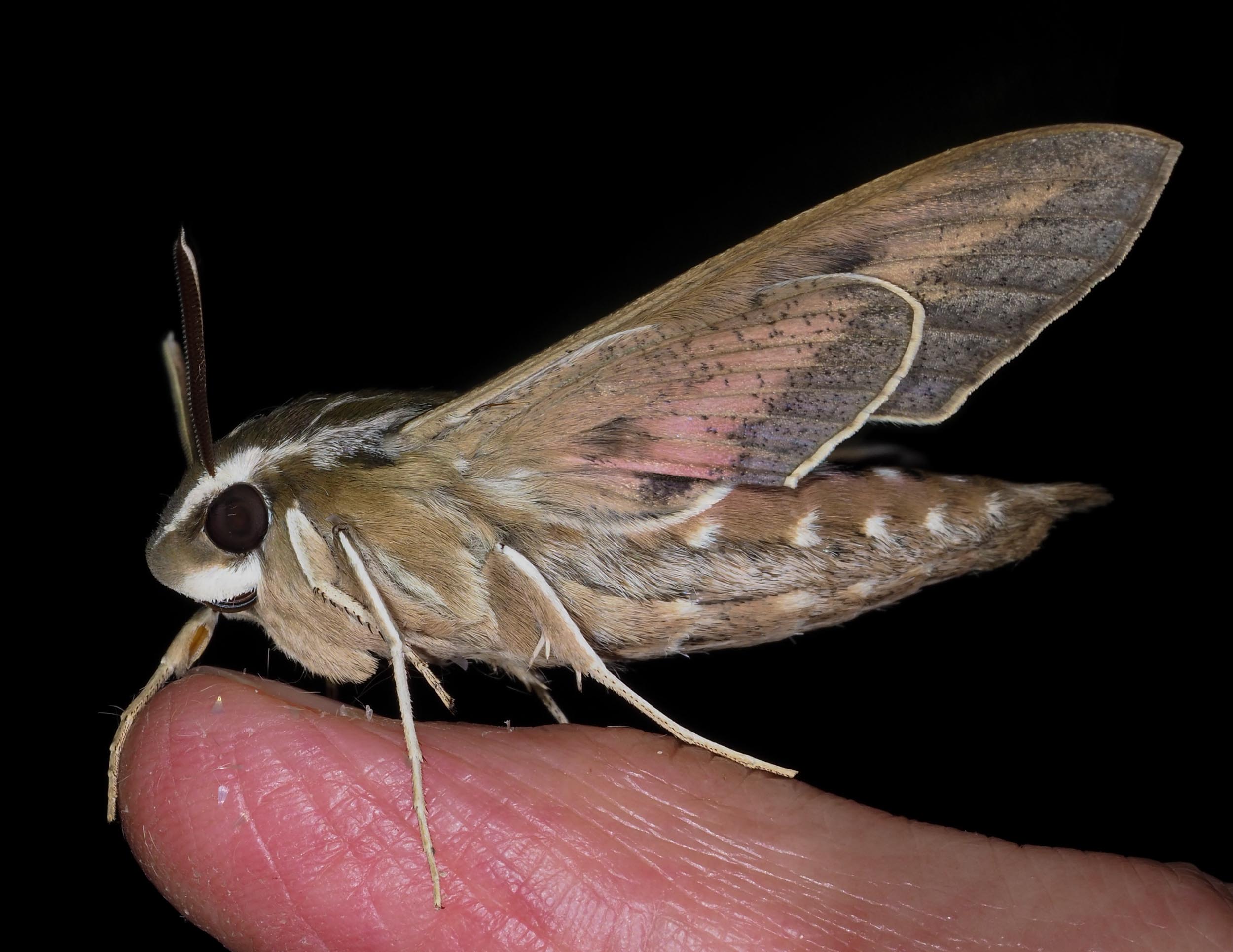