The fall has been beautiful but the colors are changing fast – every day it looks more like winter.   The only leaf colors left now are the gold and bronze and rust of the oaks.

We’re scrambling to get all our outside projects done before the snow comes.  This morning there was a dusting of snow on the ground, but it melted as soon as the sun touched it. 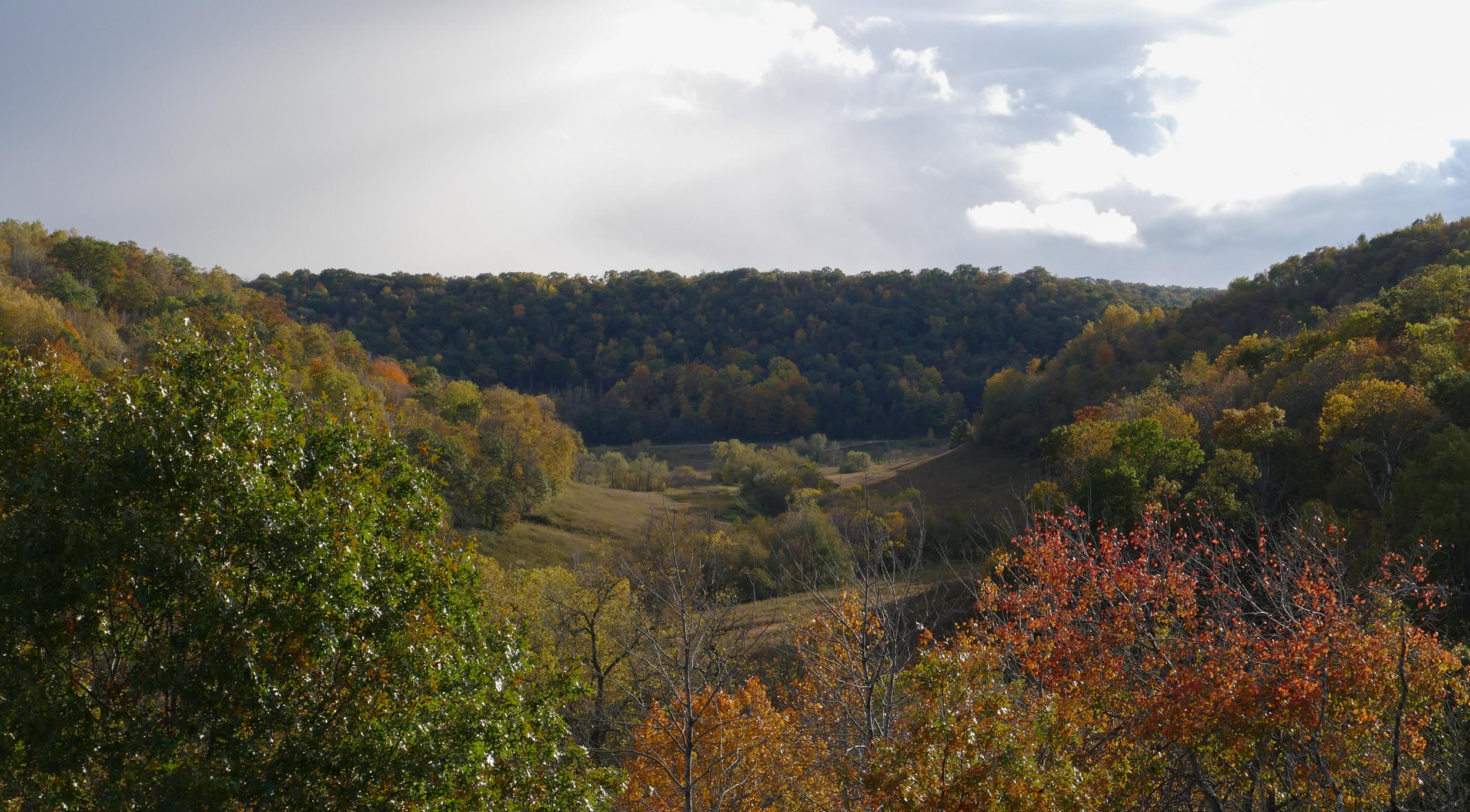 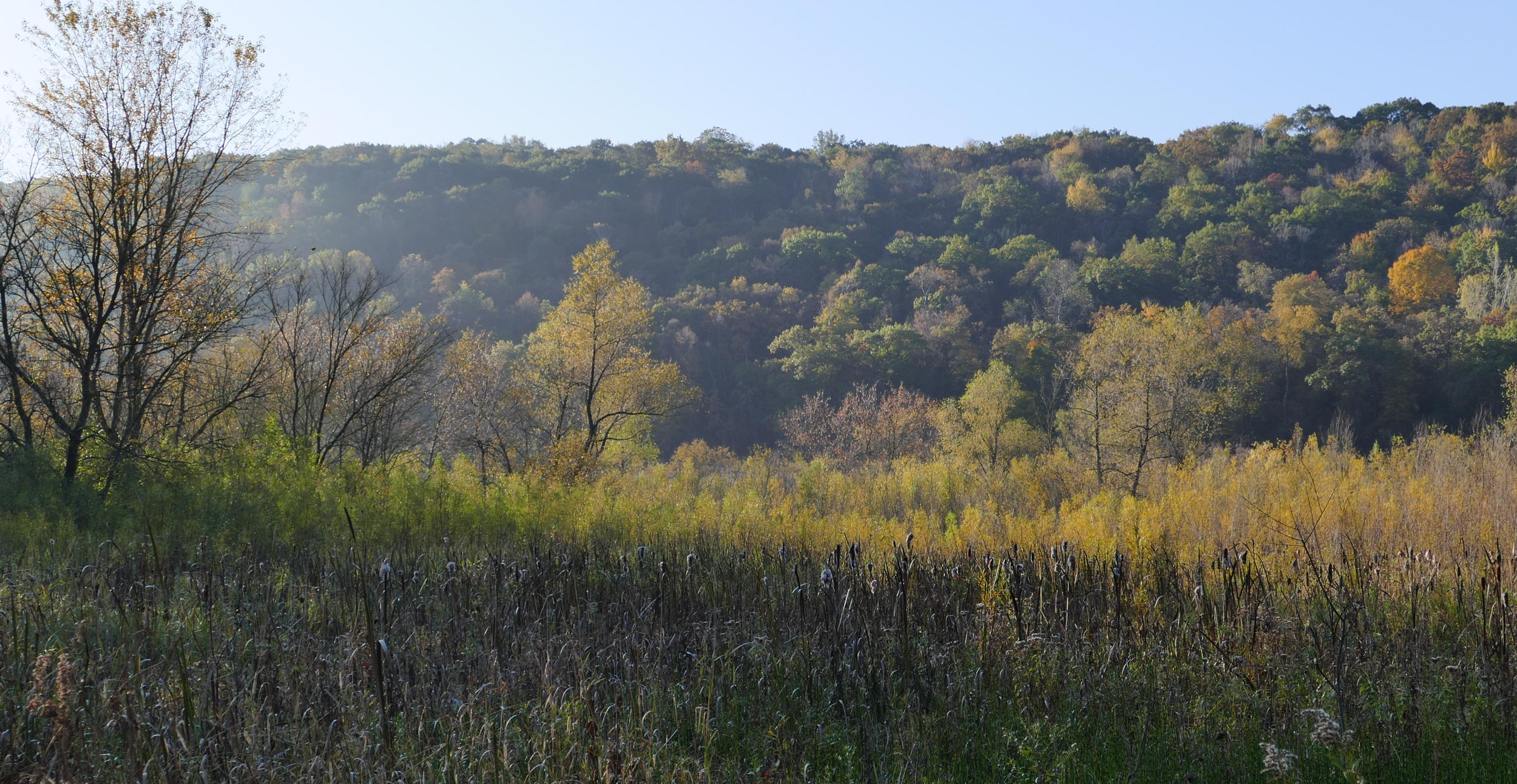 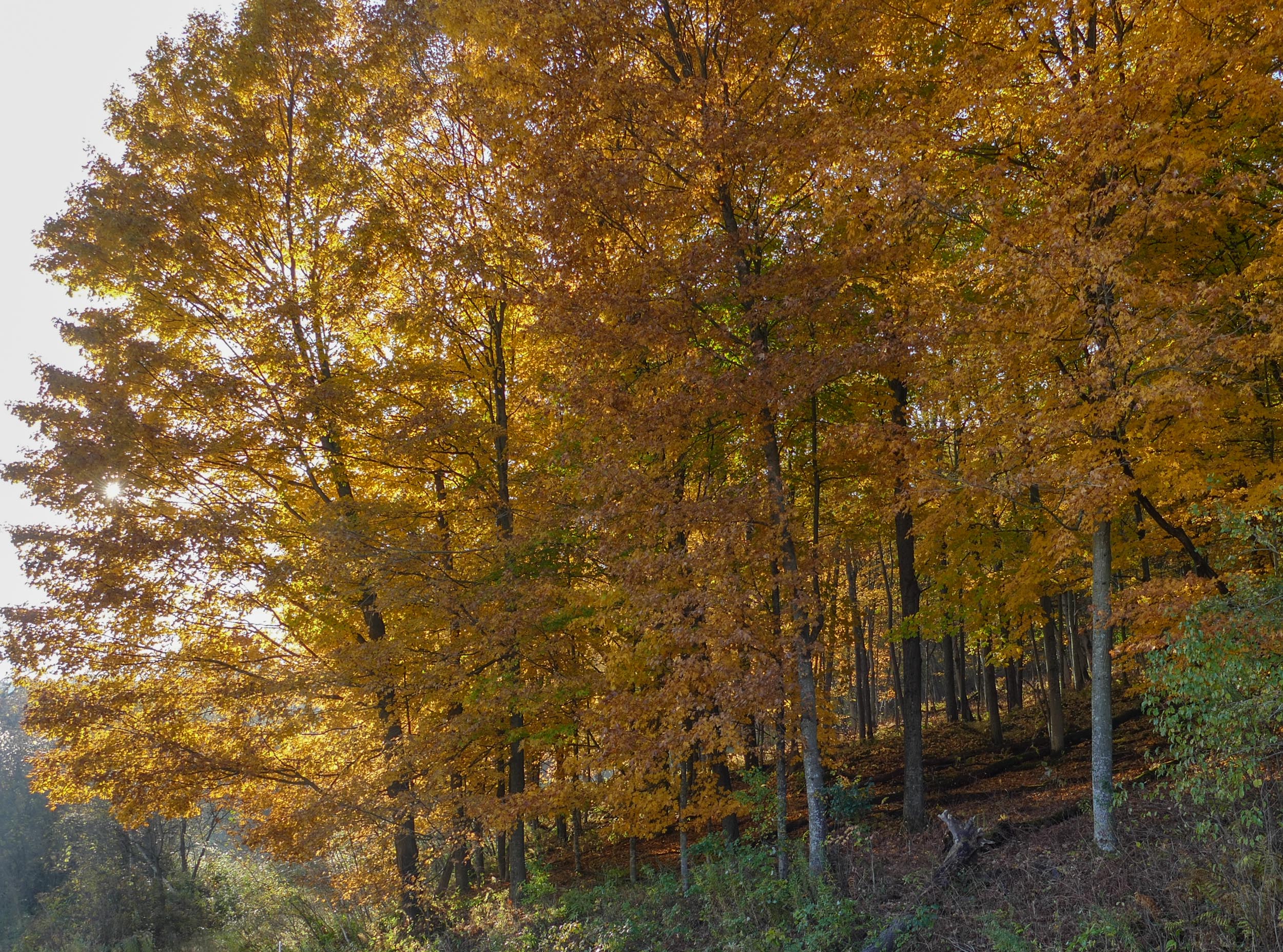 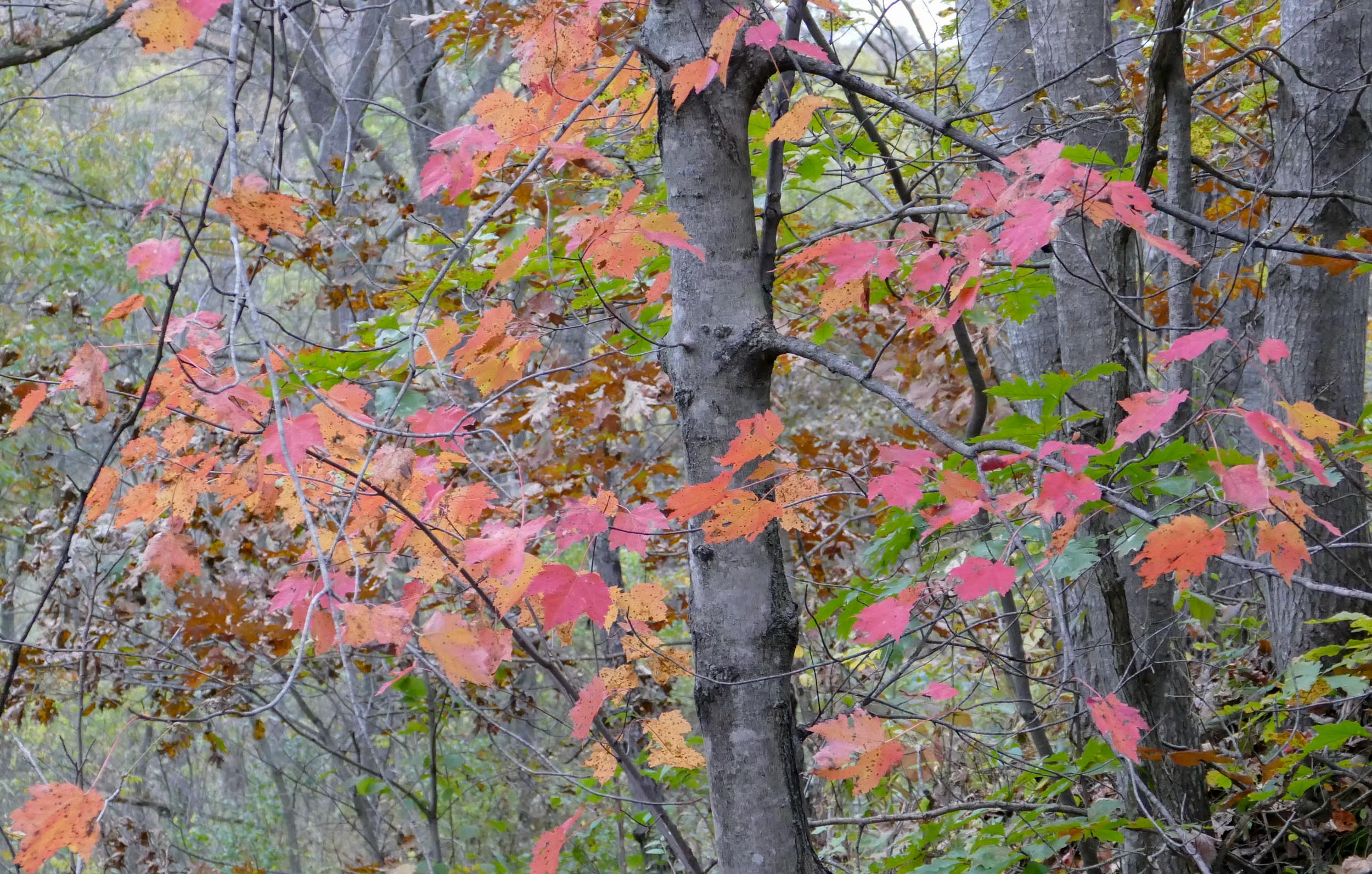 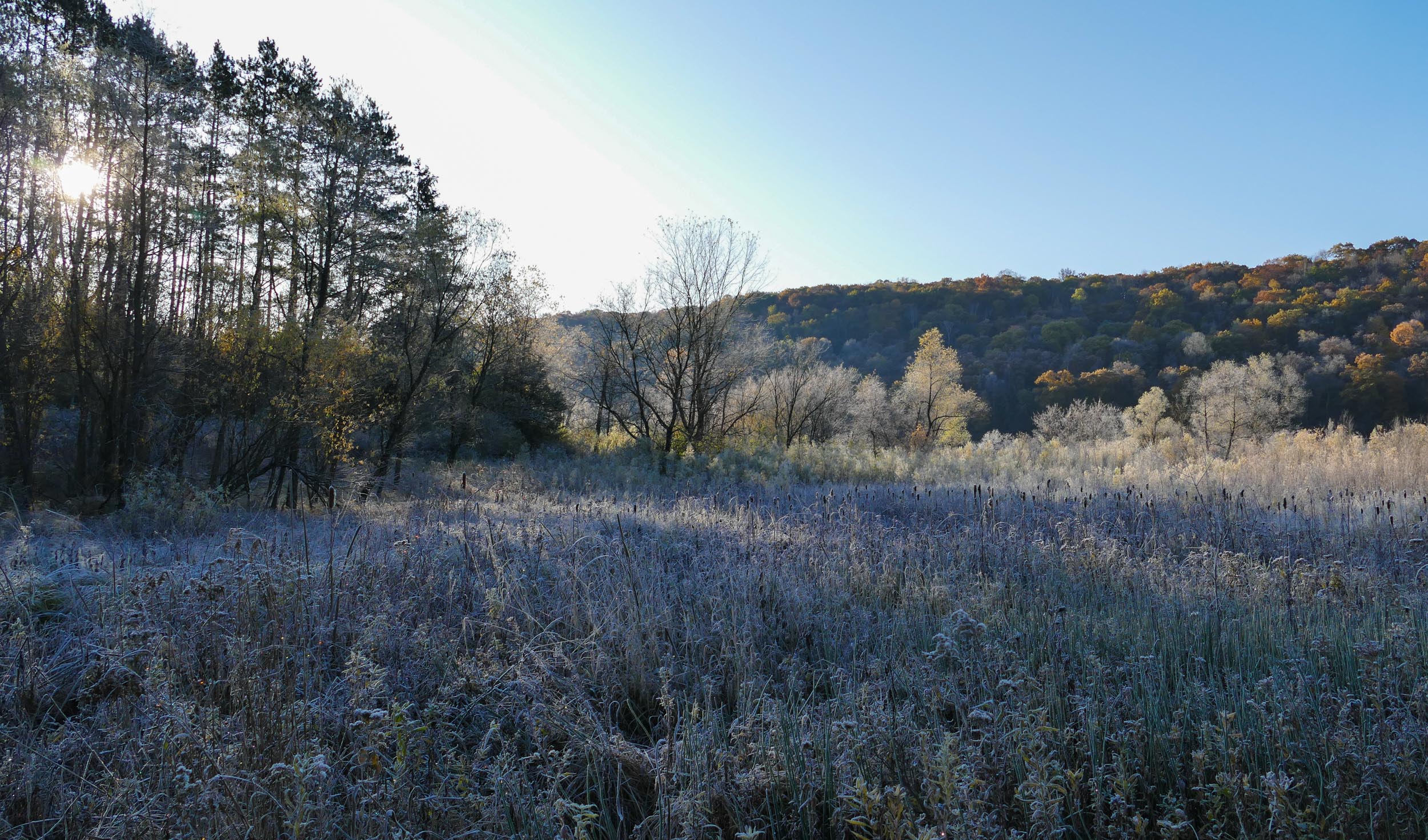 We’ve been working hard on Indian Grass Point this fall – the point of land just above the house.   This is the view from the bluff prairie at the top of the point, looking out over our Center Valley – from a few weeks ago, when some trees were still green.

This is a thicket of trees just north of the bluff prairie.  It’s an overgrown part of the savanna that we’d never cleared. 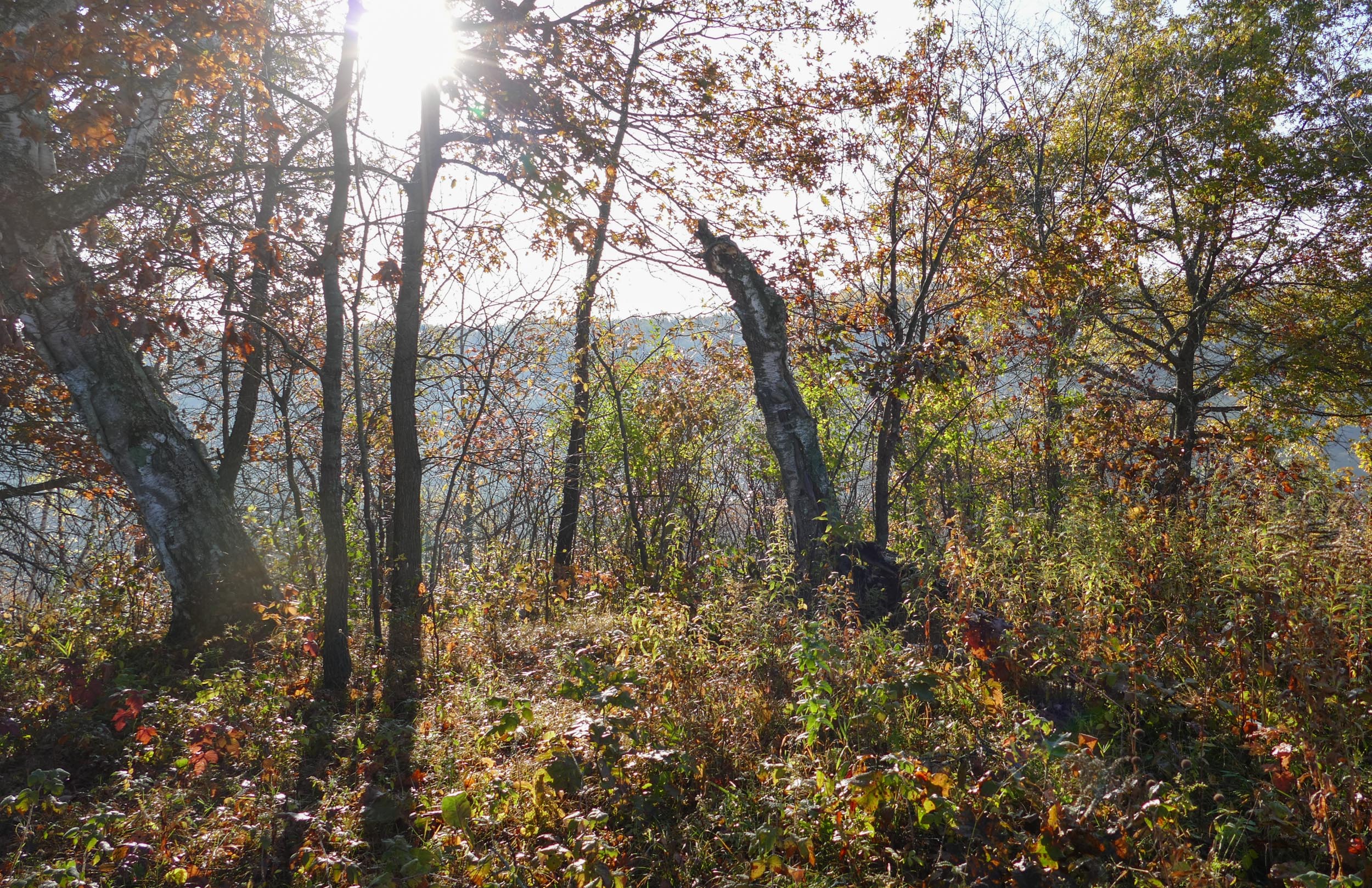 In the middle of the project – most of the brush and trees were cut, but there were brush and log piles everywhere. 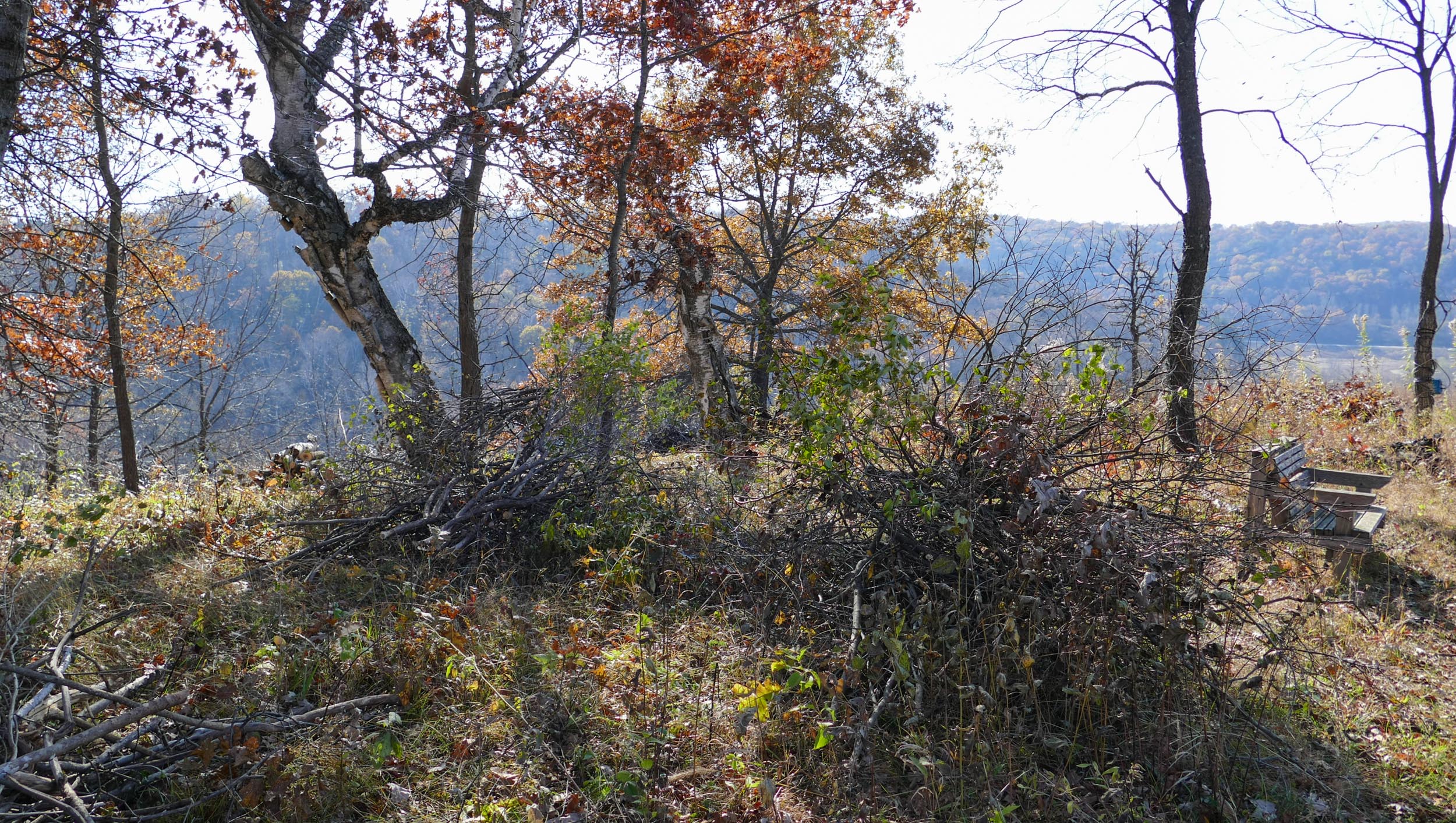 Here’s the way it looks now.  The big spreading oak is a Hill’s Oak, and there are a few smaller Burr Oaks.  There are still a few trees we’d like to cut, but they’re tangled in the limbs of the dying birch, so they’ll have to wait. 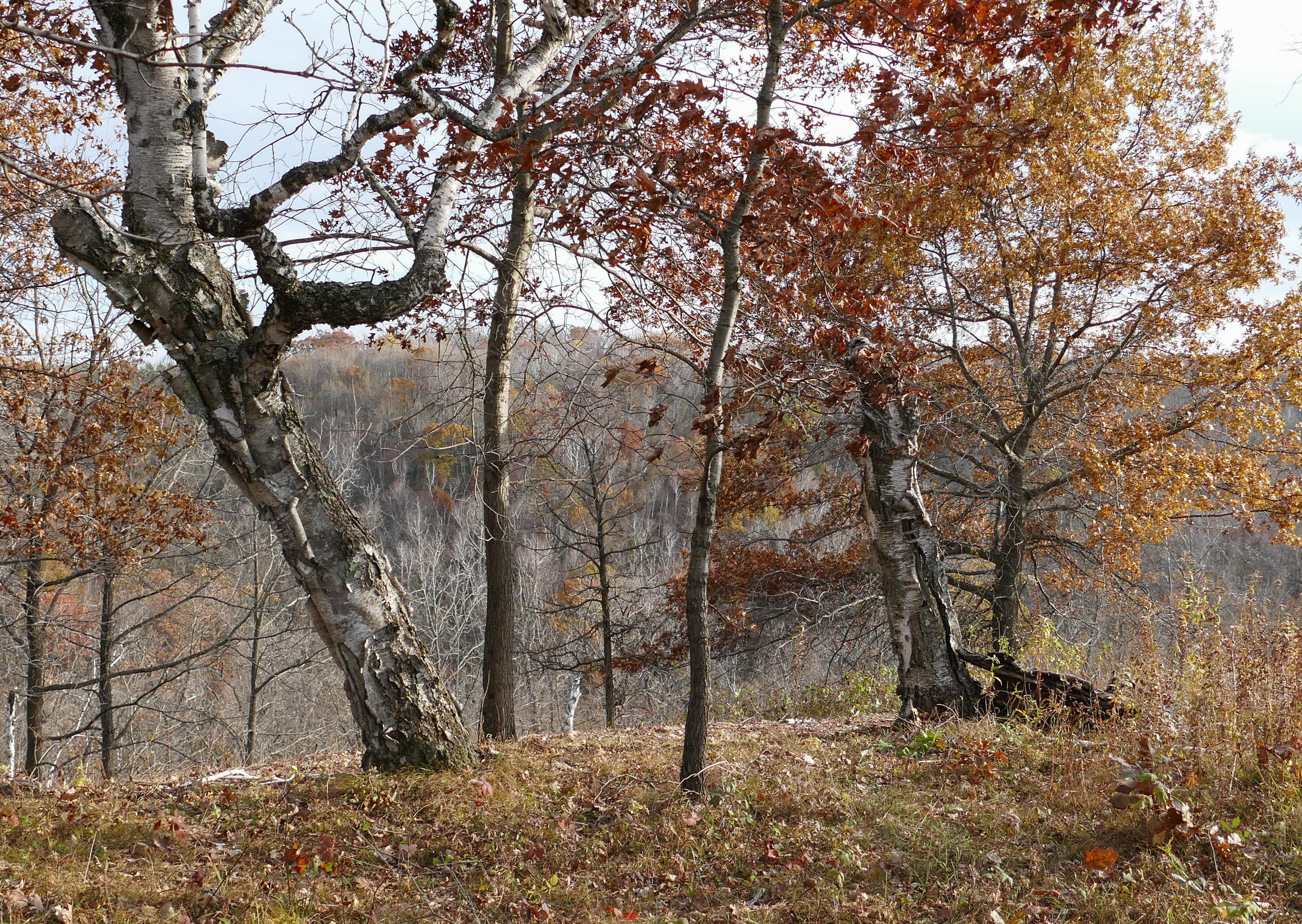 Our friend Todd is working to clear another of our savannas – the one above the Big View bluff prairie.  It has many old, open-grown oaks, but also lots of elms and brushy shrubs.  Here’s a photo from before he started working. 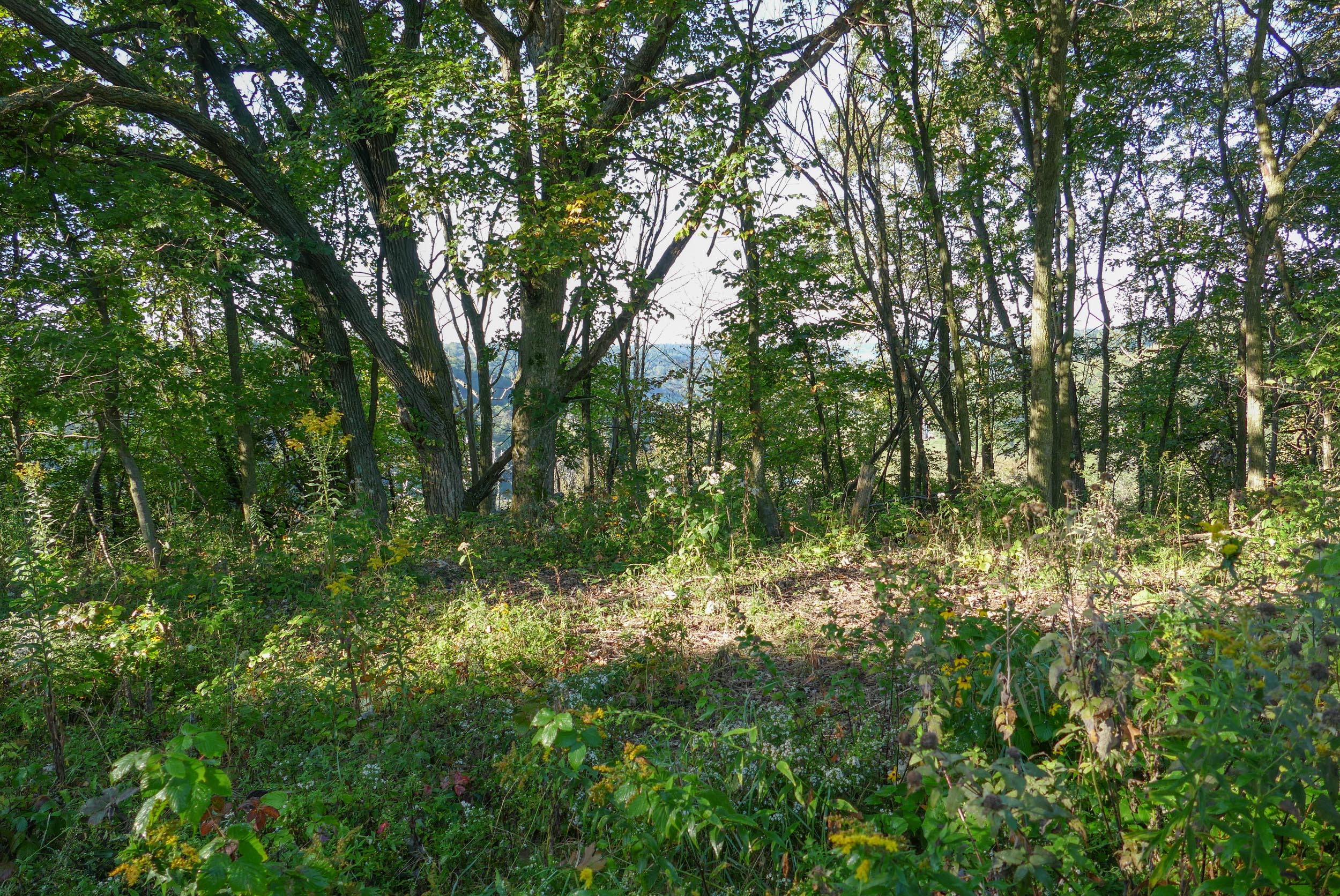 Todd cut and piled, and Mike and I hauled away the brush and logs.  Here’s the same view about a week later – not finished, but much more open. 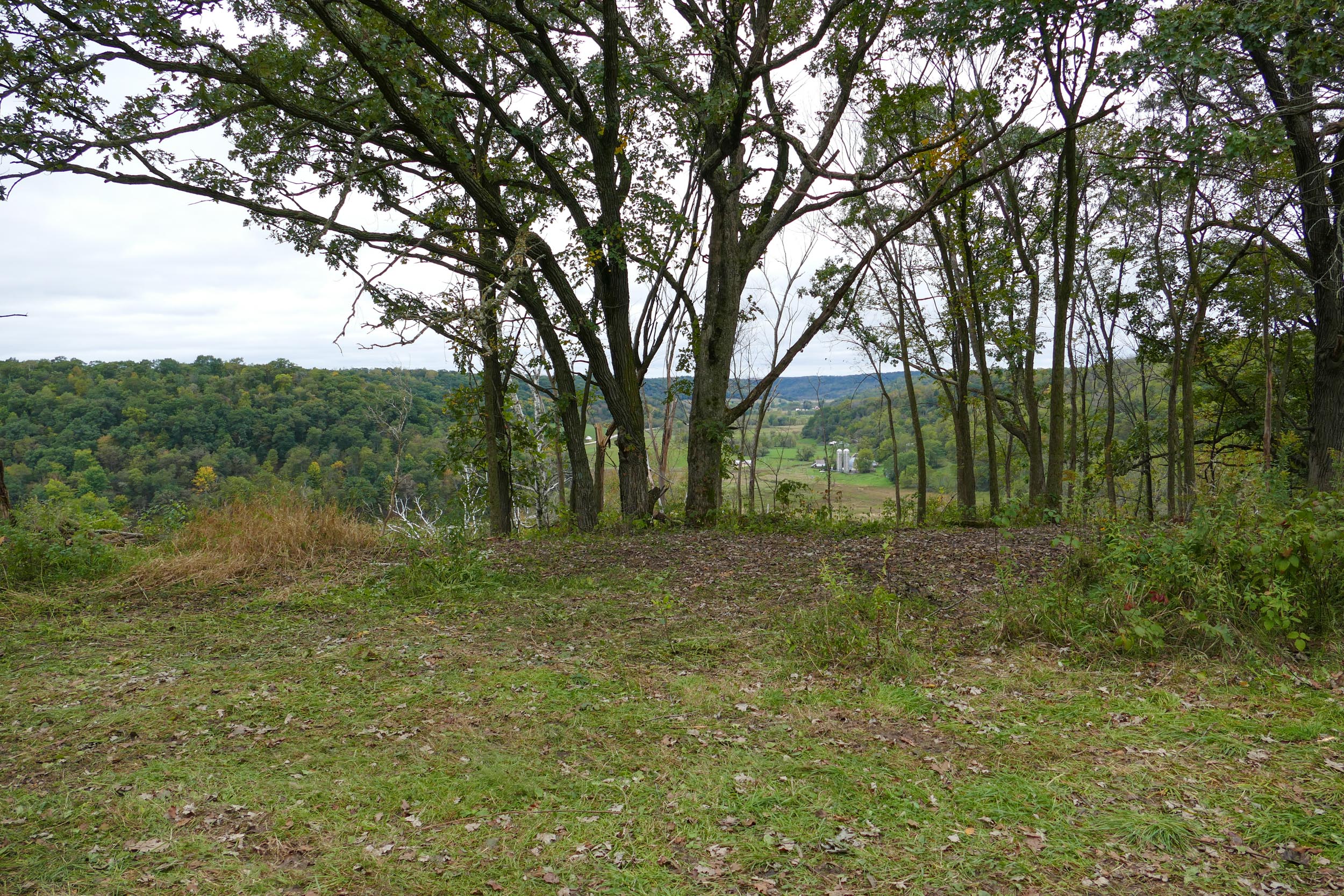 The brush was tangled together so Mike was able to pick up huge piles.  This one might be a record. 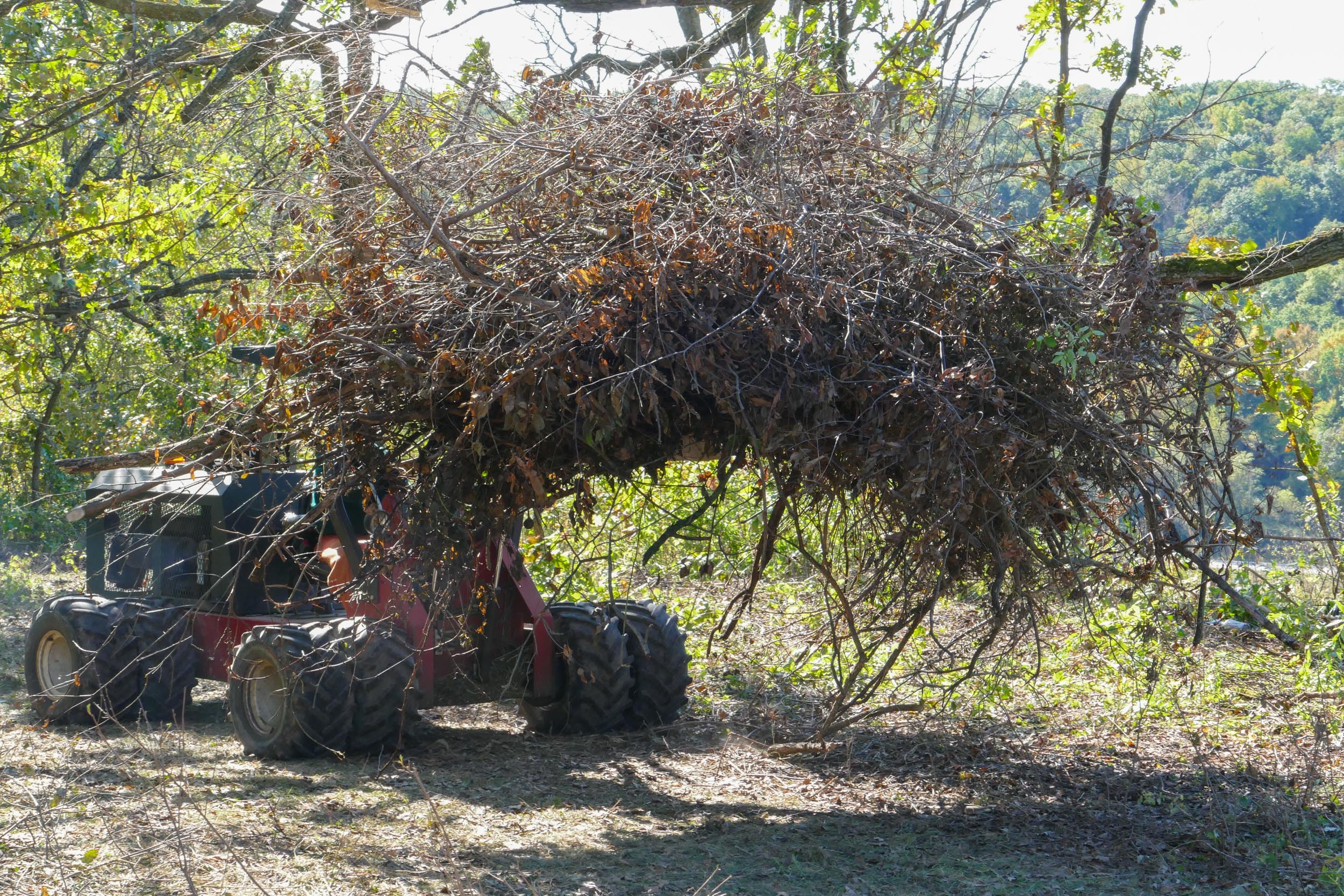 This is the way that ridge looks now from below – Pine Point Prairie at the bottom, then a band of overgrown savanna, then Big View Prairie (the bluff prairie remnant), and the newly cleared savanna at the top.

Another view of Big View Prairie and the savanna 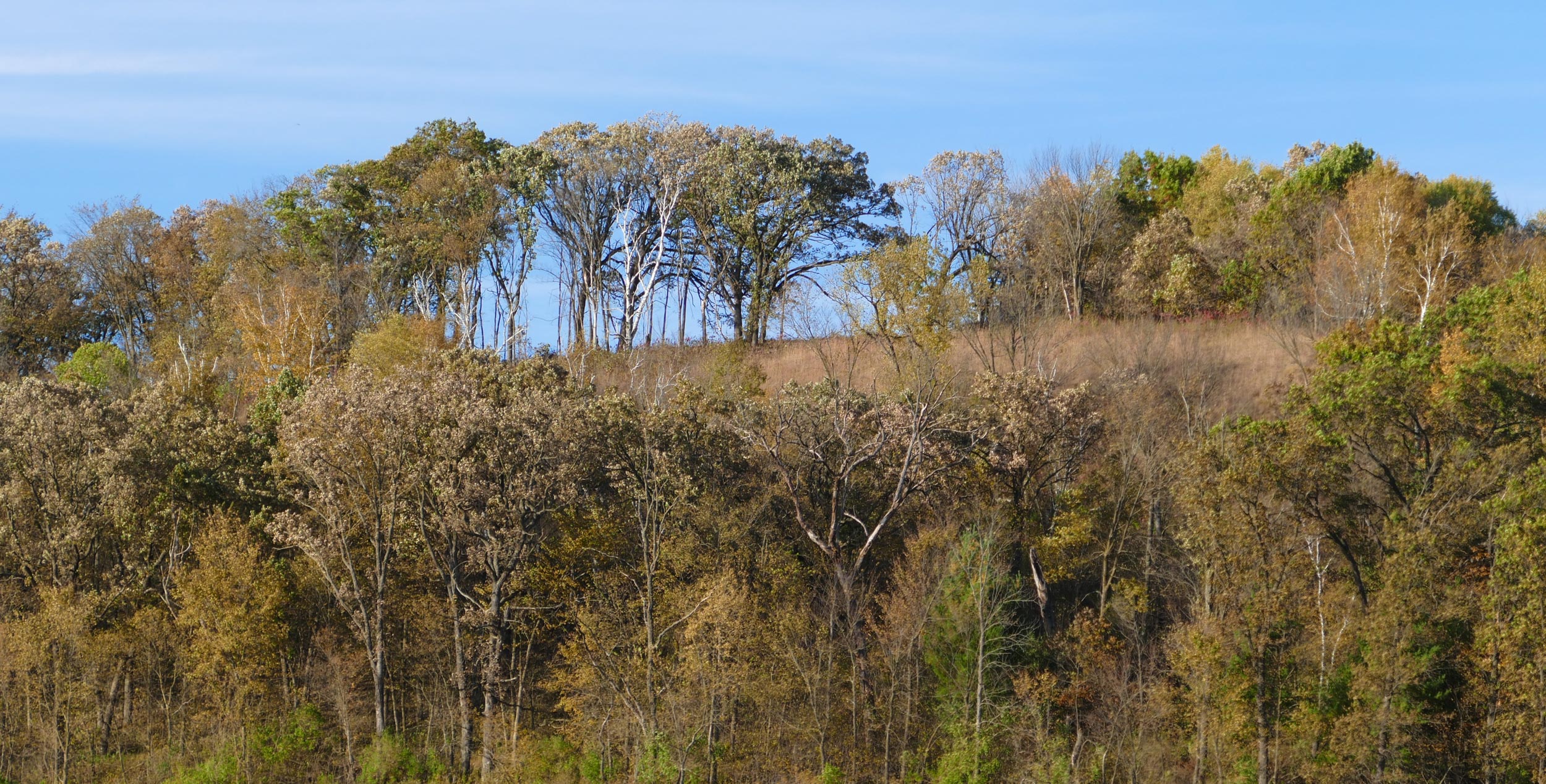 Every week our bird list gets shorter – so many birds are heading south for the winter.  This week we’re seeing big flocks of migrating Robins.  These were from a few weeks ago – Cedar Waxwings and one Bluebird. 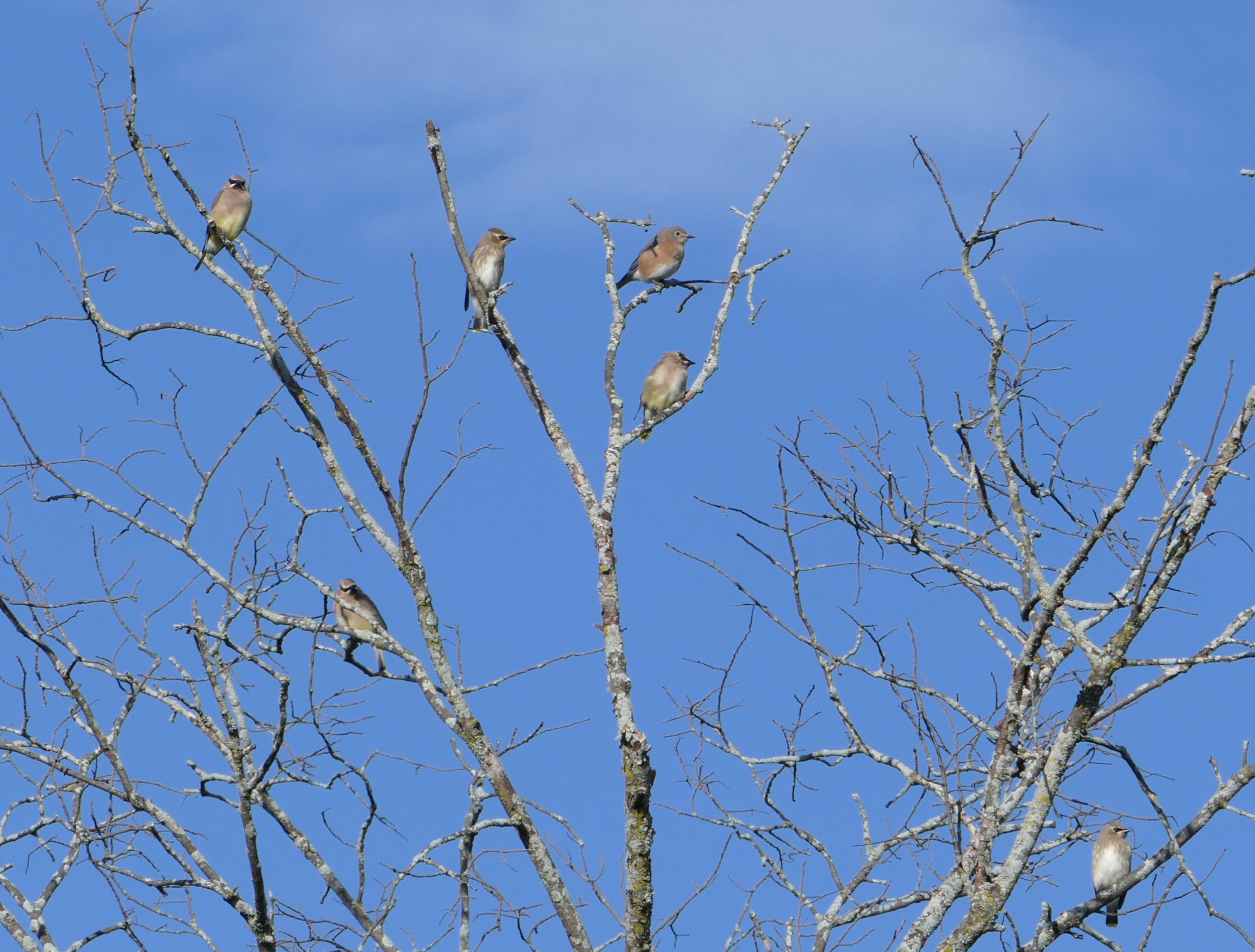 The grasses have all changed to their fall colors too.  This is Switchgrass with some Yellow Coneflower seed heads. 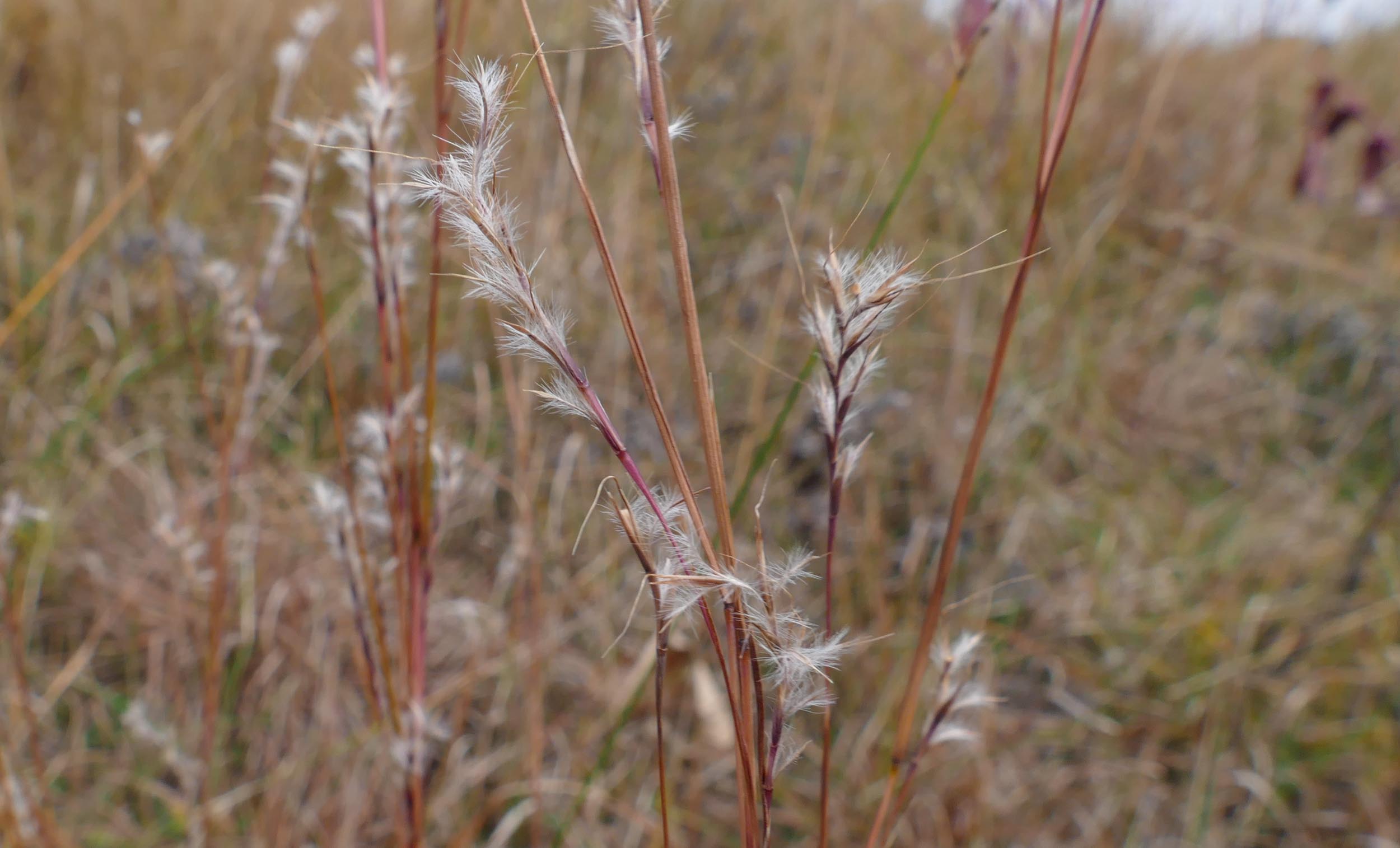 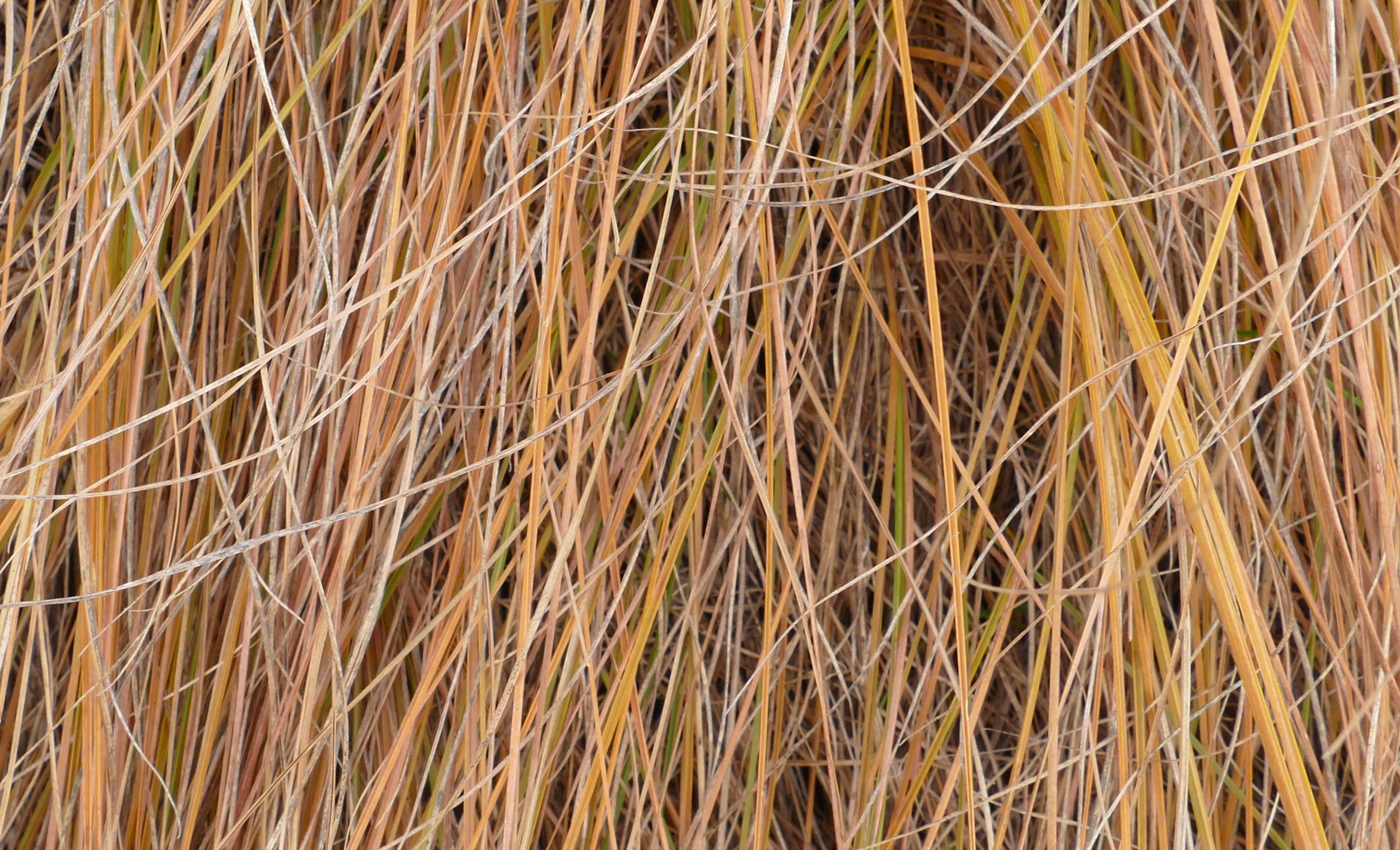 Most of the flowers have gone to seed by now. 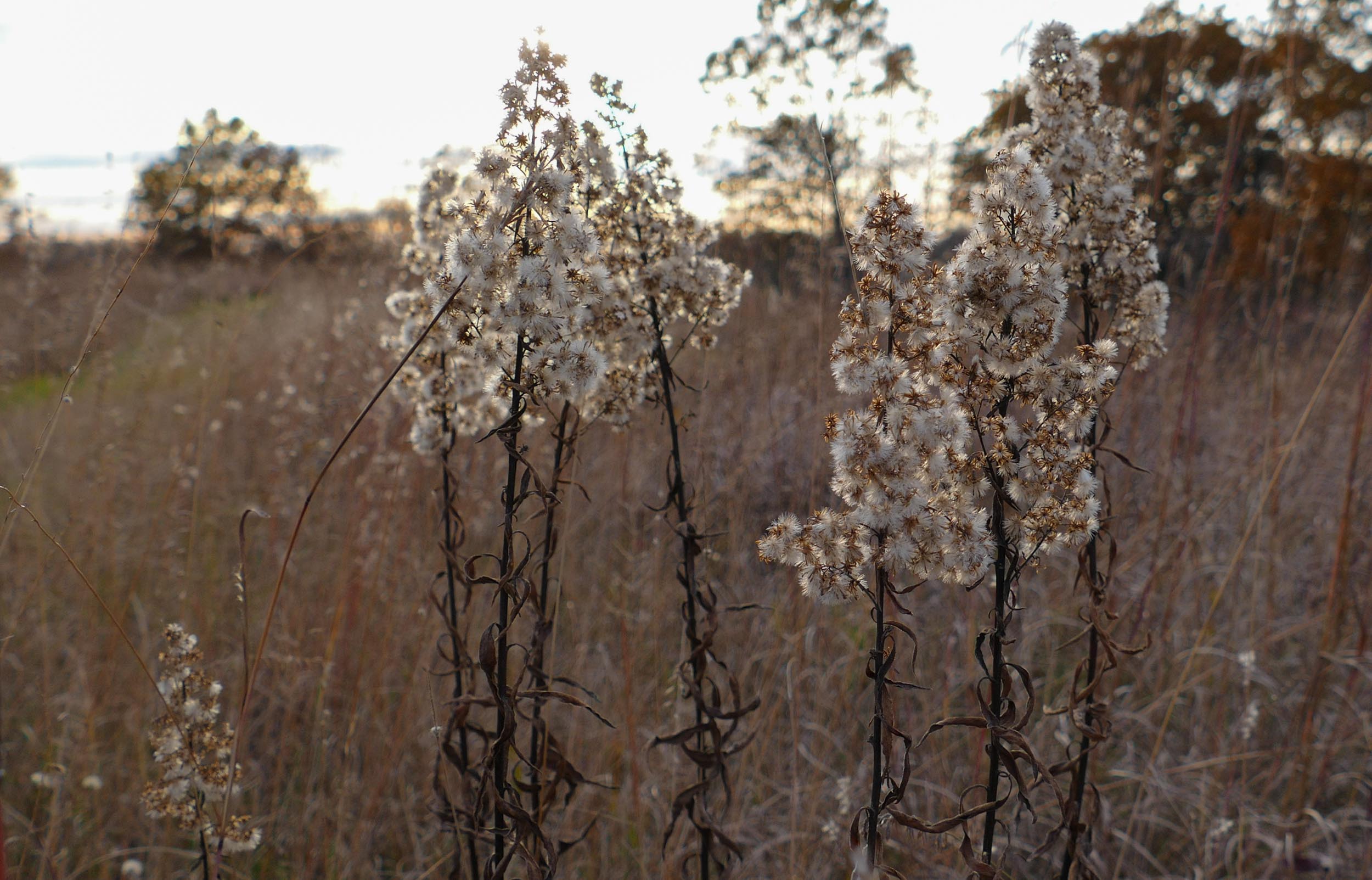 But there are few still blooming.

While I was working on cutting brush in the Knife Edge Prairie, I found a lovely little late-blooming orchid – October Ladies’ Tresses.   It’s a ‘special concern’ plant in Wisconsin, and this is the farthest north it’s ever been found. 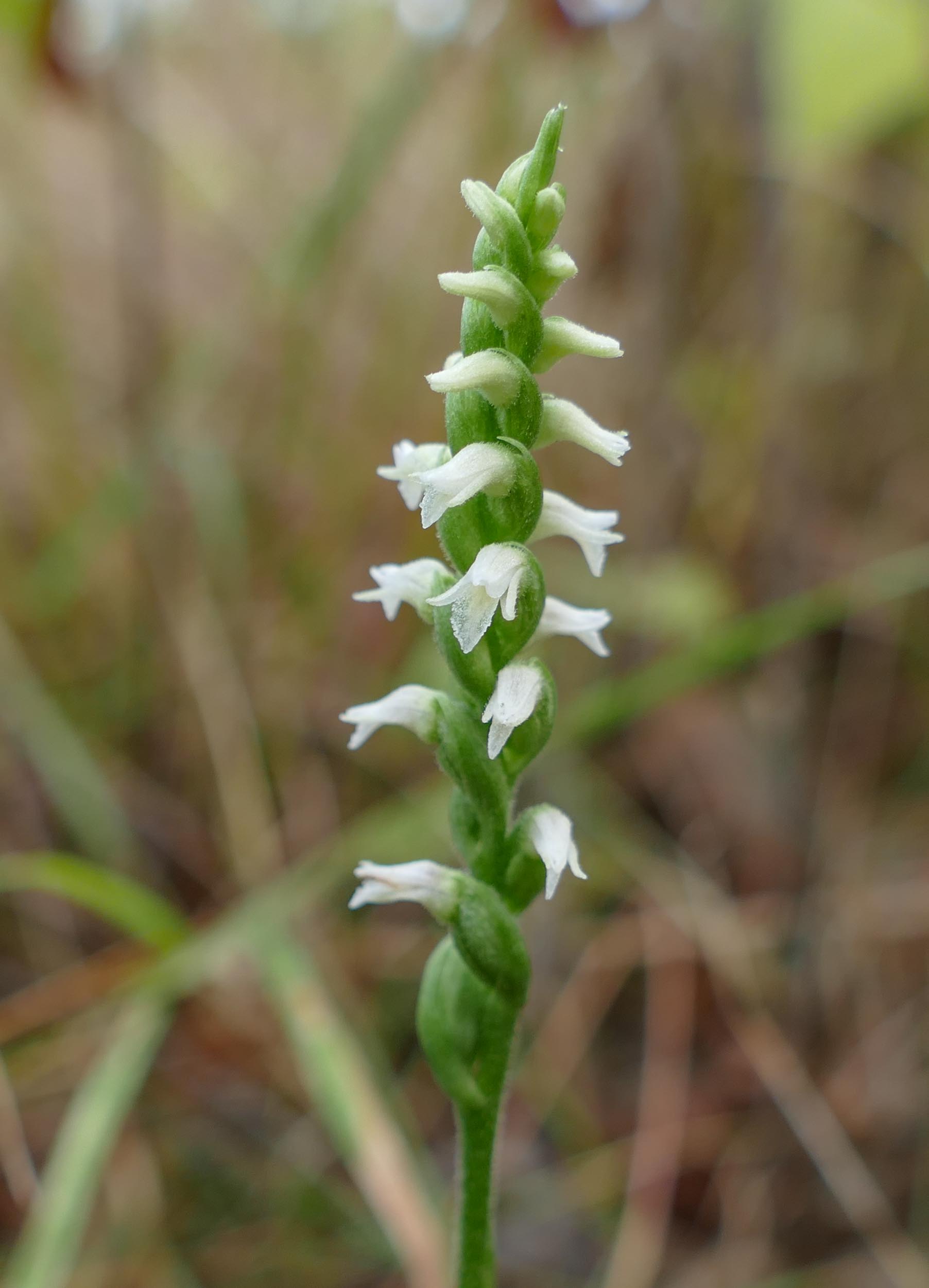 It’s much smaller and more delicate than Great Plains Ladies’ Tresses – the other late blooming Spiranthes we have.  This one grows on our remnant bluff prairies. 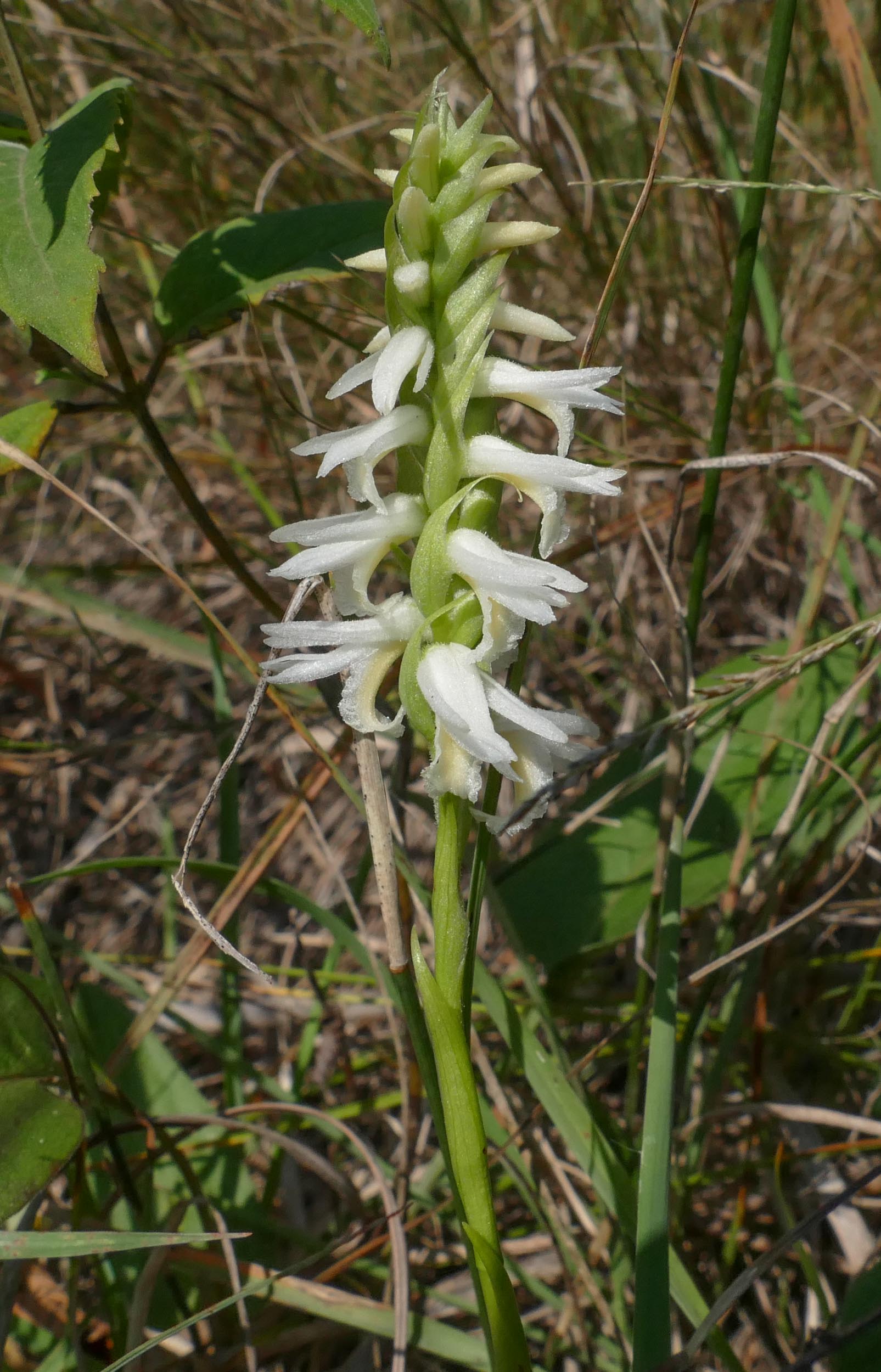 Aromatic Aster is another of the very late-blooming flowers. 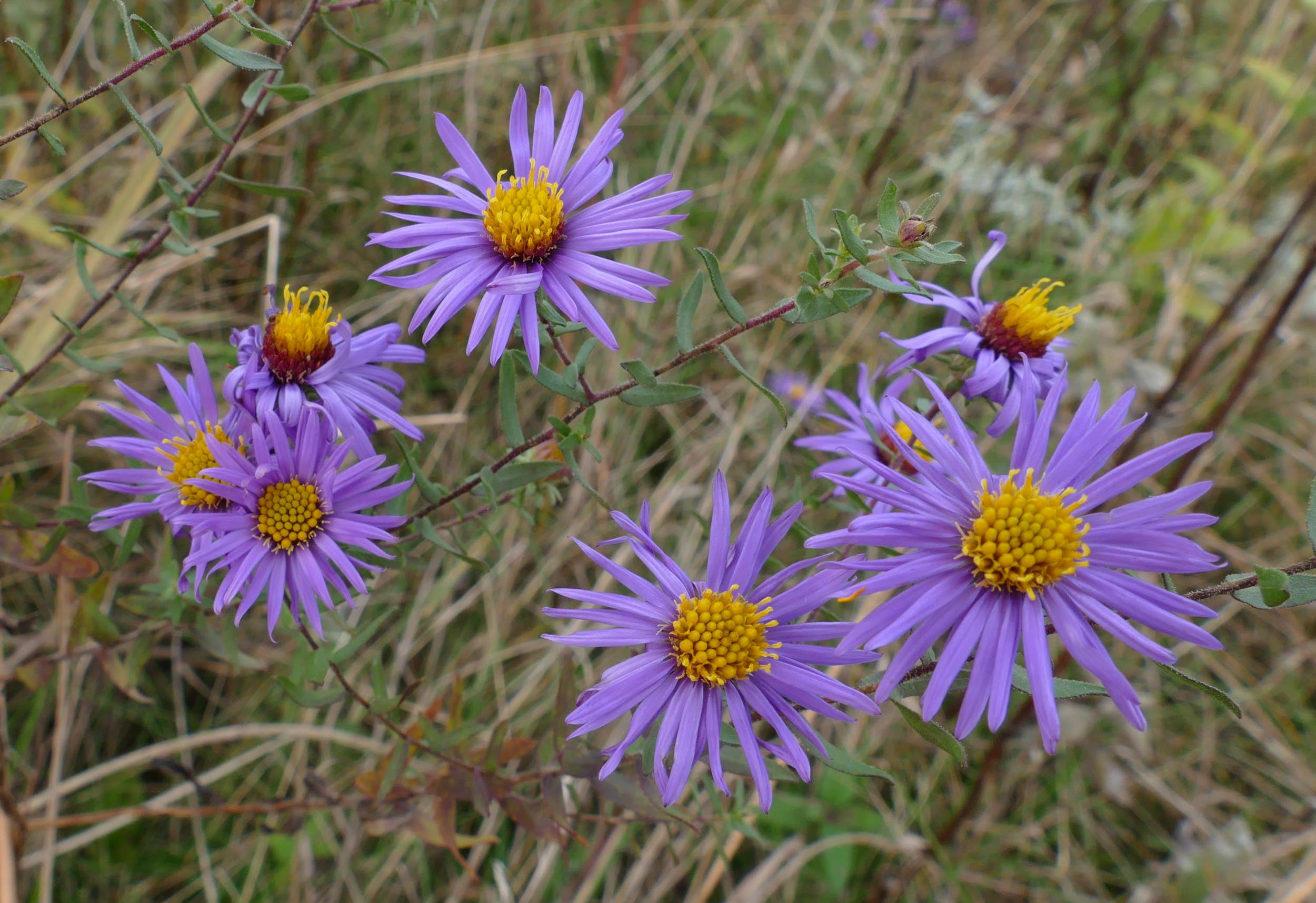 And Stiff Gentian is still blooming right now – even after many frosts and some sprinkles of snow. 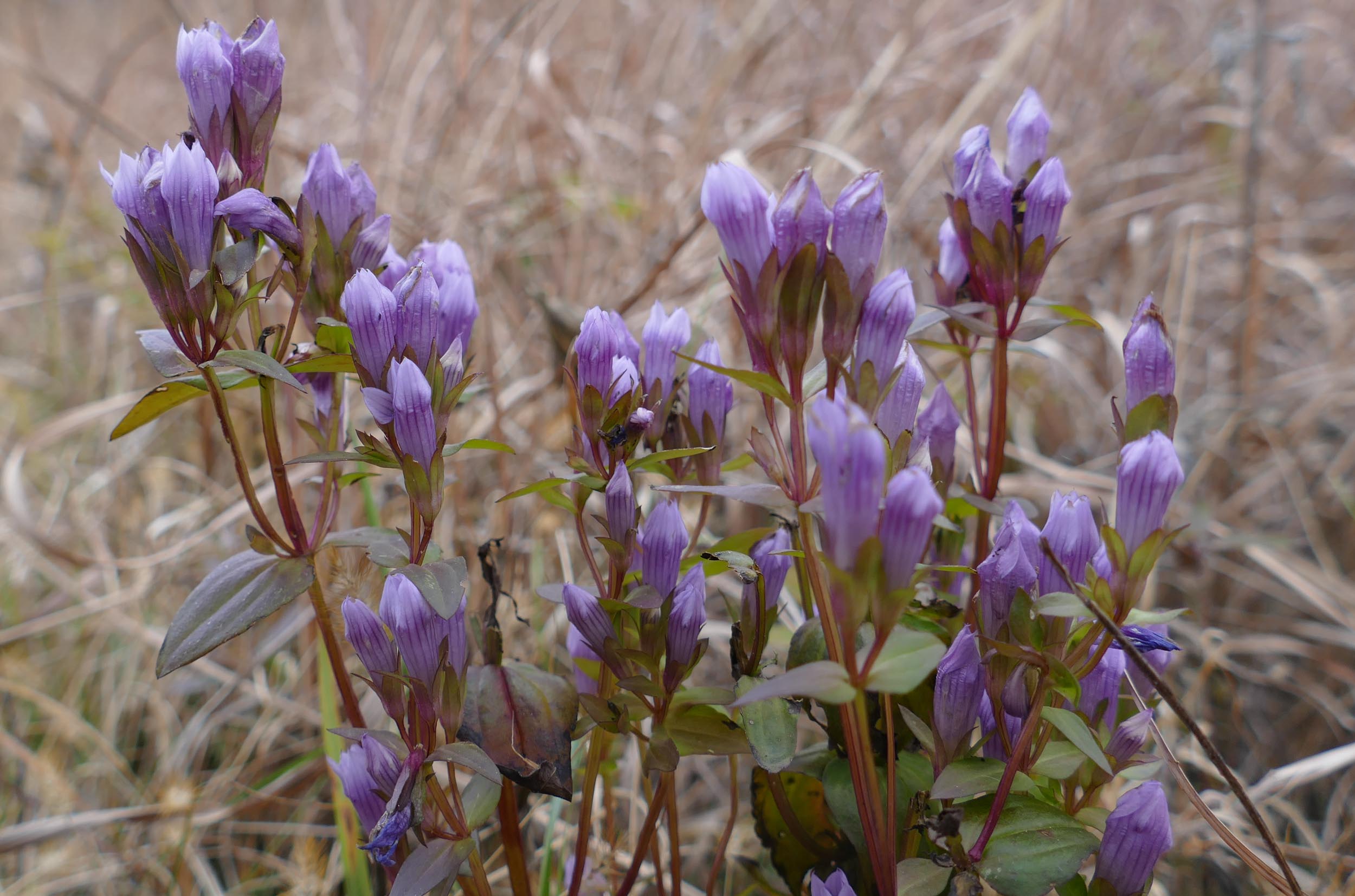 Another fall project has been battling the beavers.  They’ve been trying – again – to build a dam just above the culvert that goes under our driveway.  We took out a small dam that had been gradually building up for a few weeks and by the next morning they had constructed this. 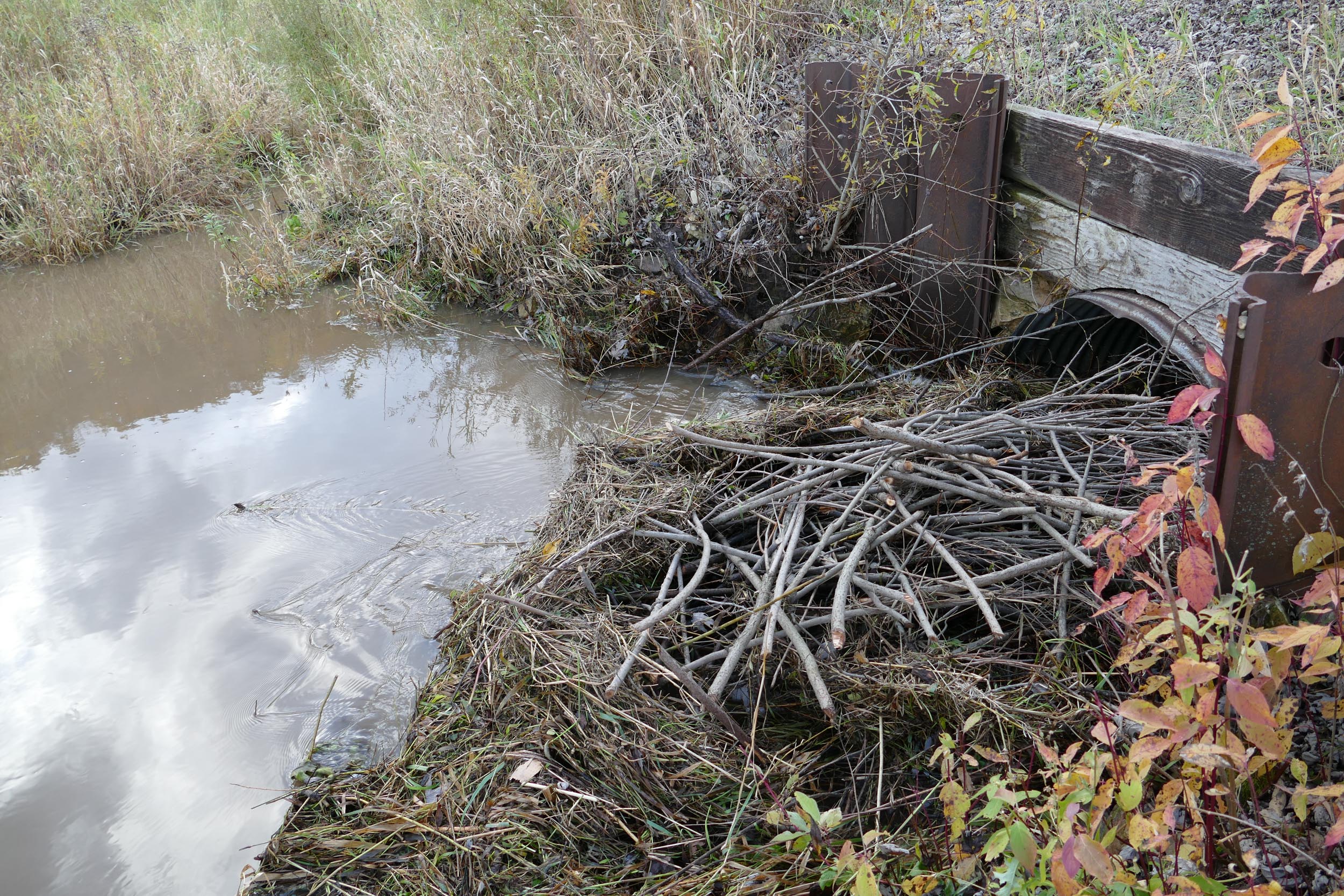 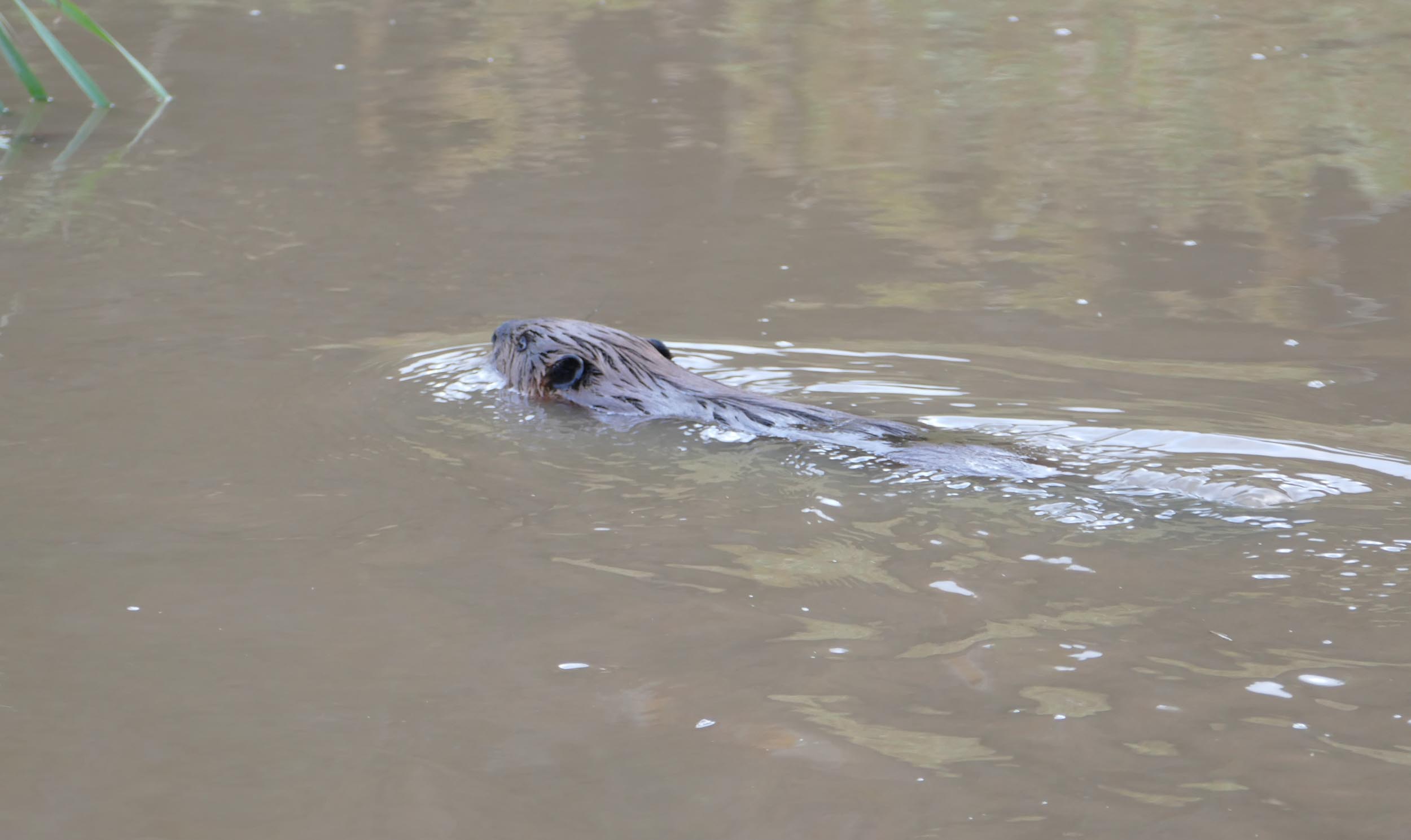 By the next day they had nearly filled the culvert. 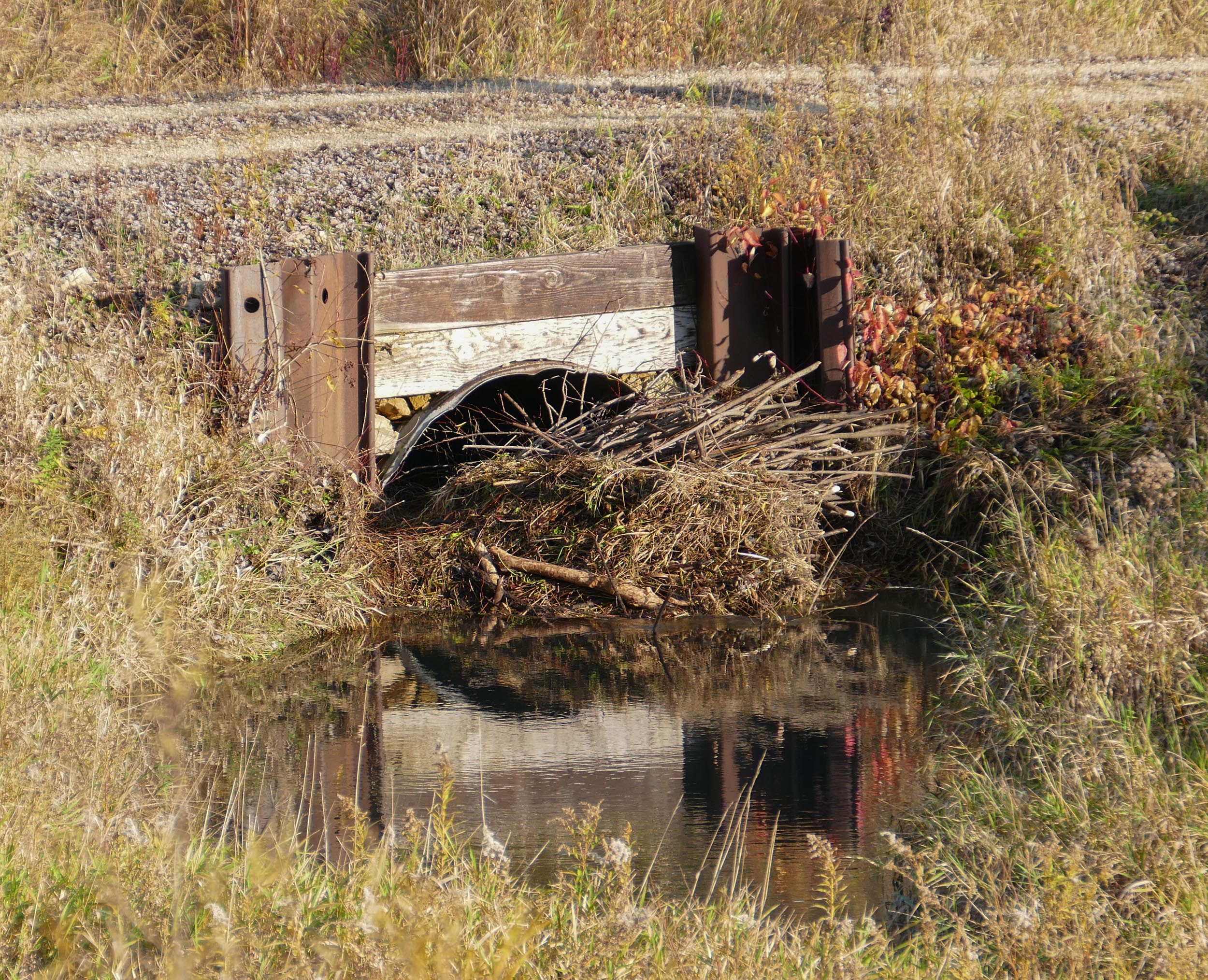 It took us all day to remove that one.  They haven’t been back for several days now, so we’re hopeful that they’ve given up. 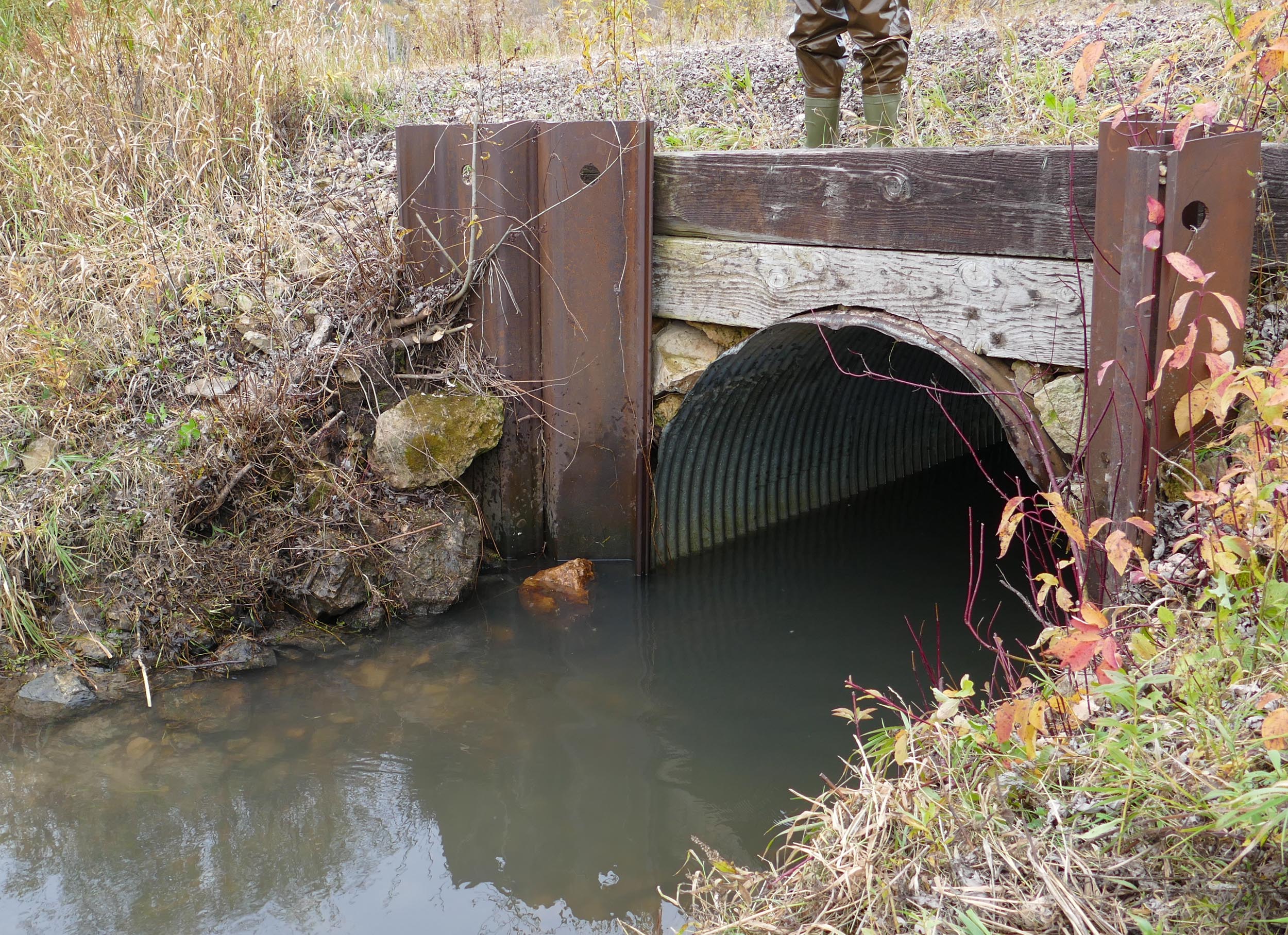 These 3 were waiting for us when we came back from a walk. 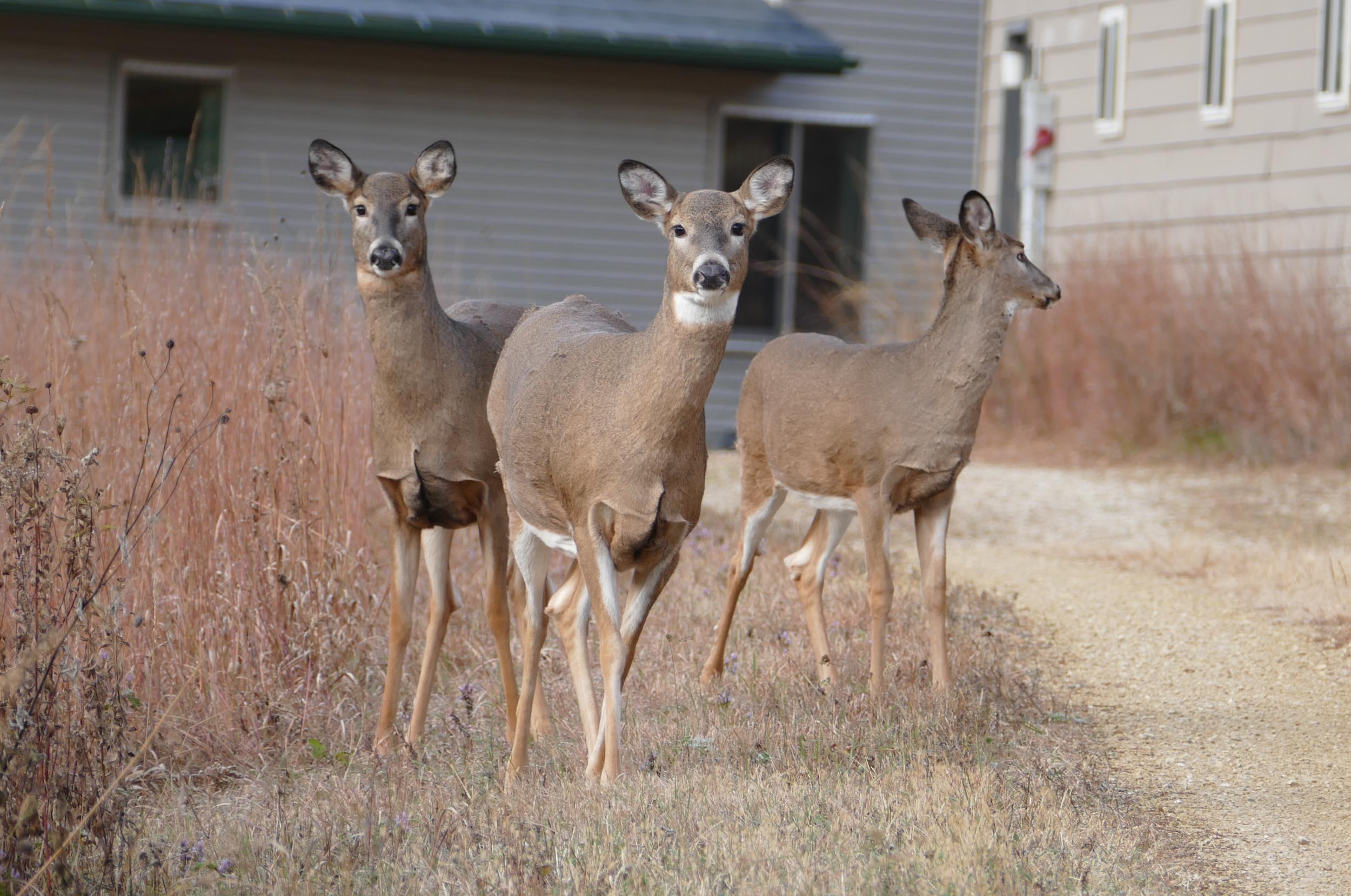 We watched these two Ruffed Grouse courting one day last week.  They didn’t seem concerned about us watching at all. 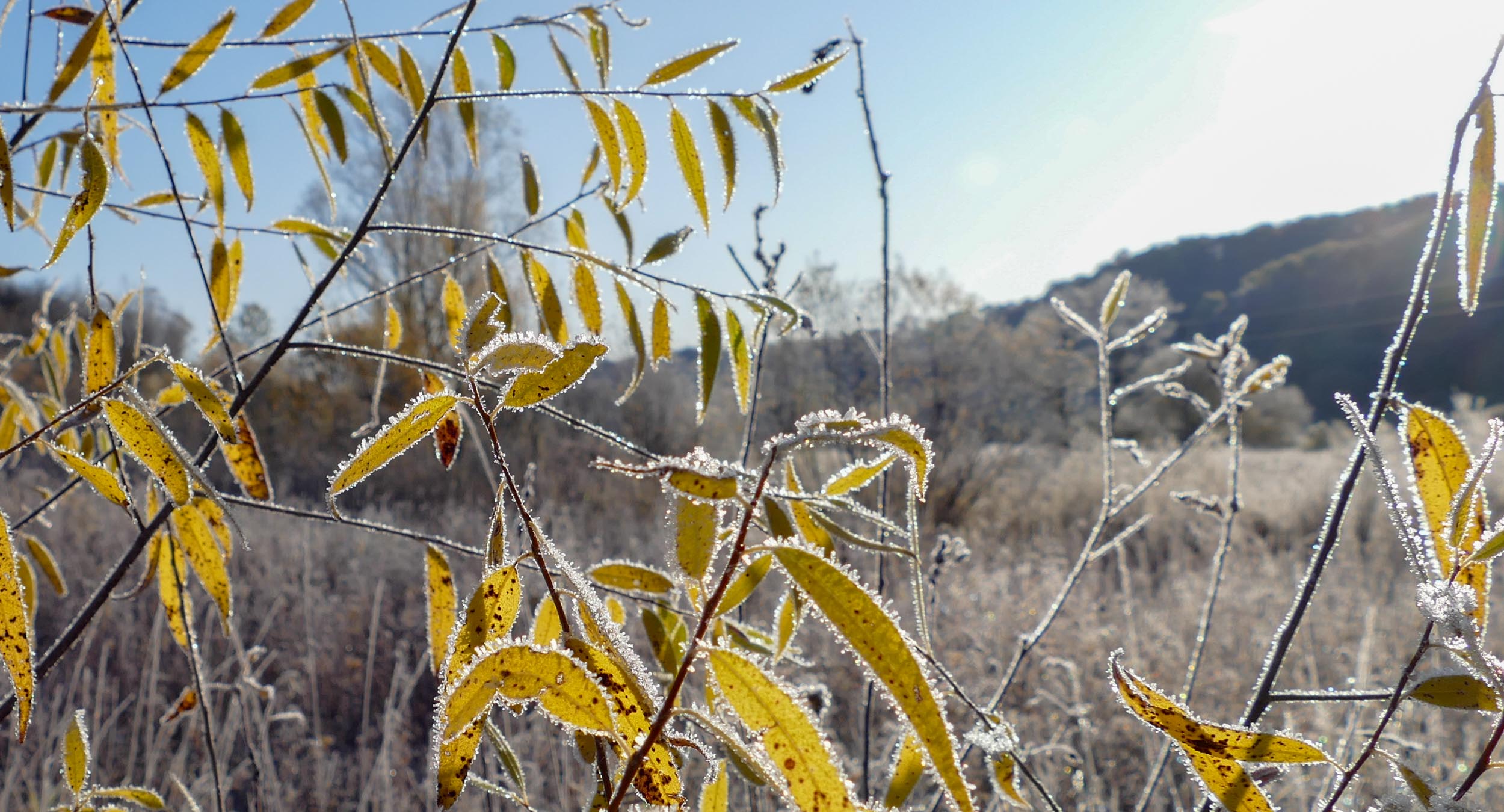 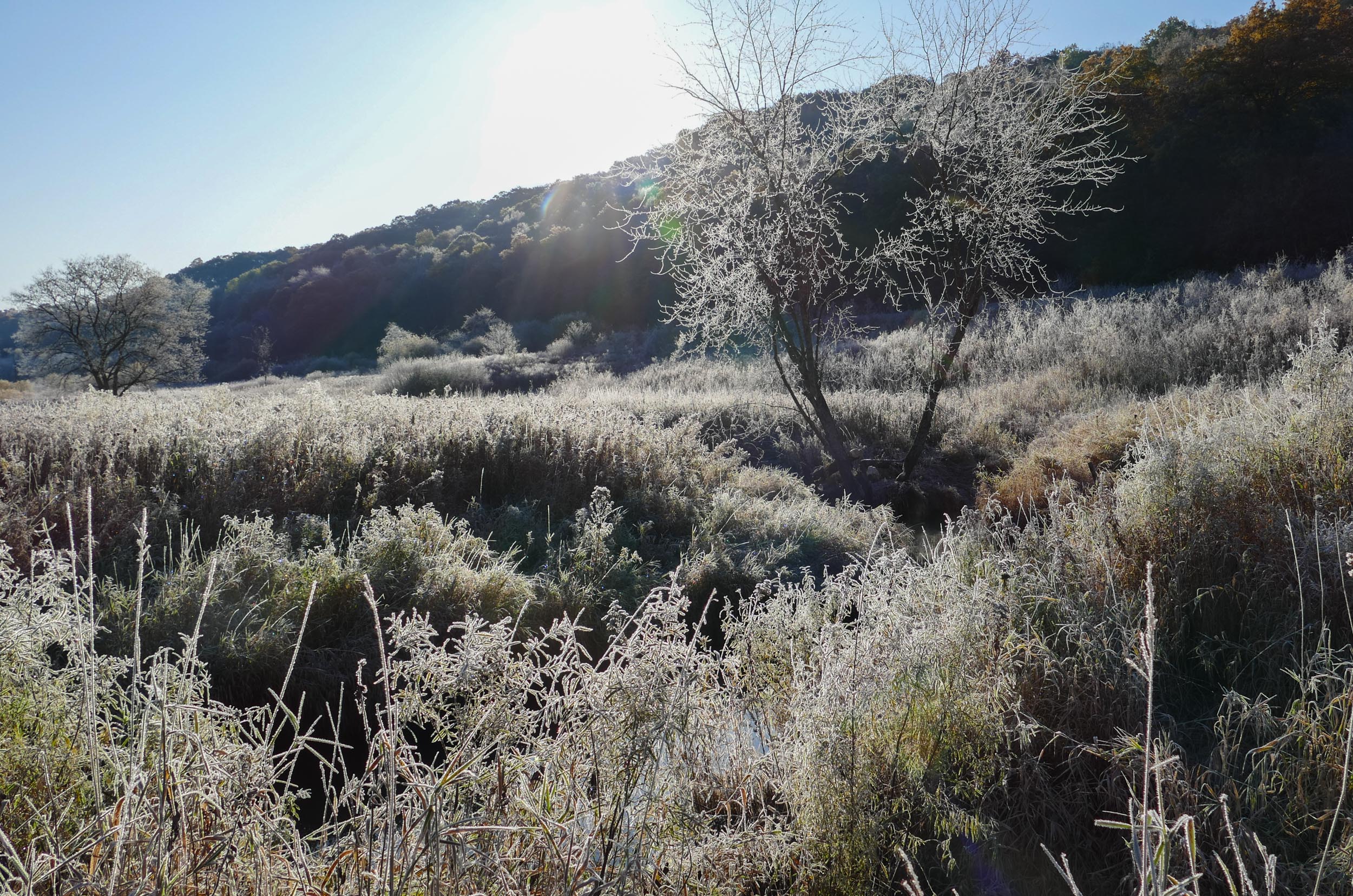 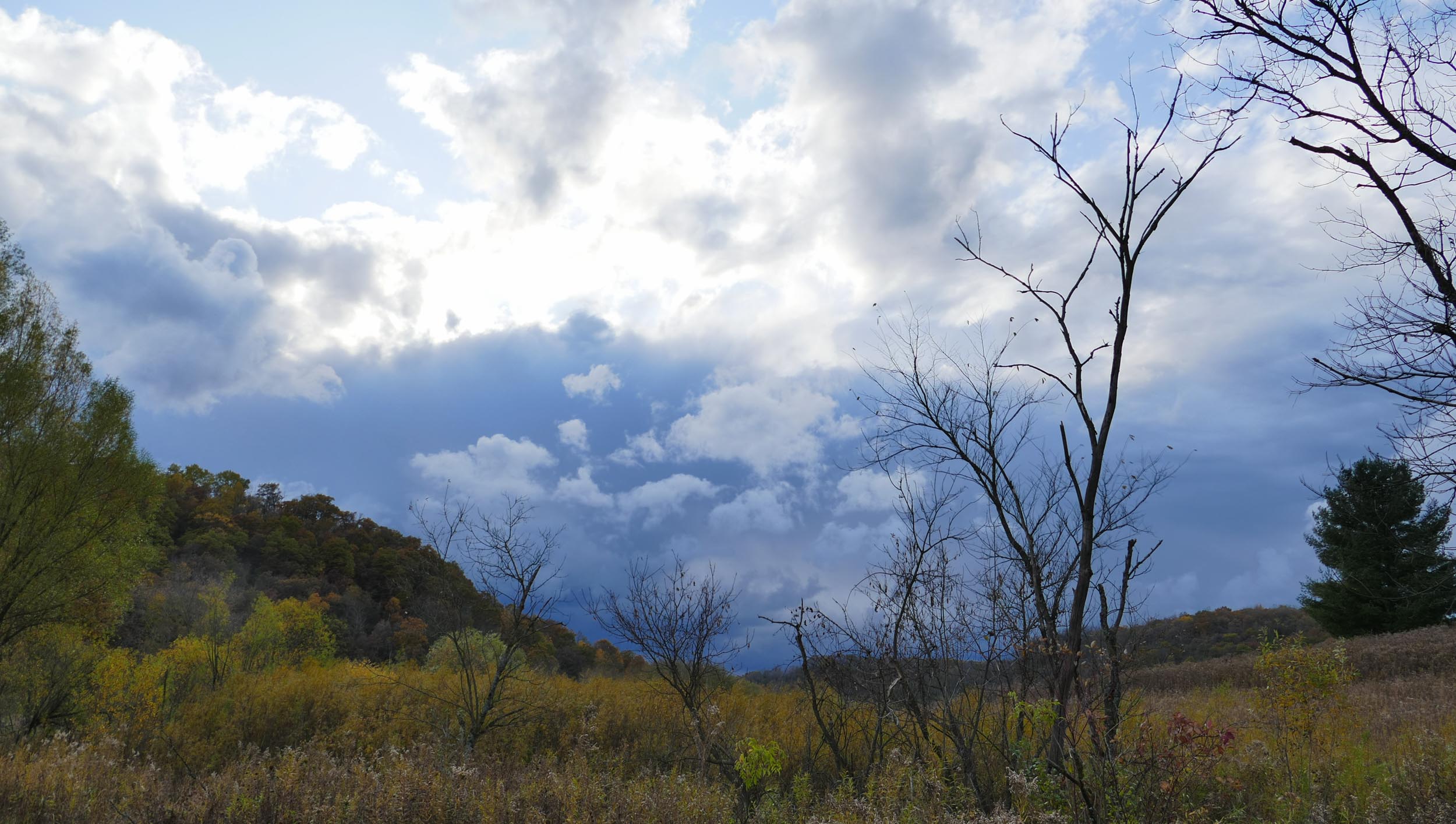 Knife Edge Prairie   This cloud had snow in it – it was snowing by the time we got back to the house. 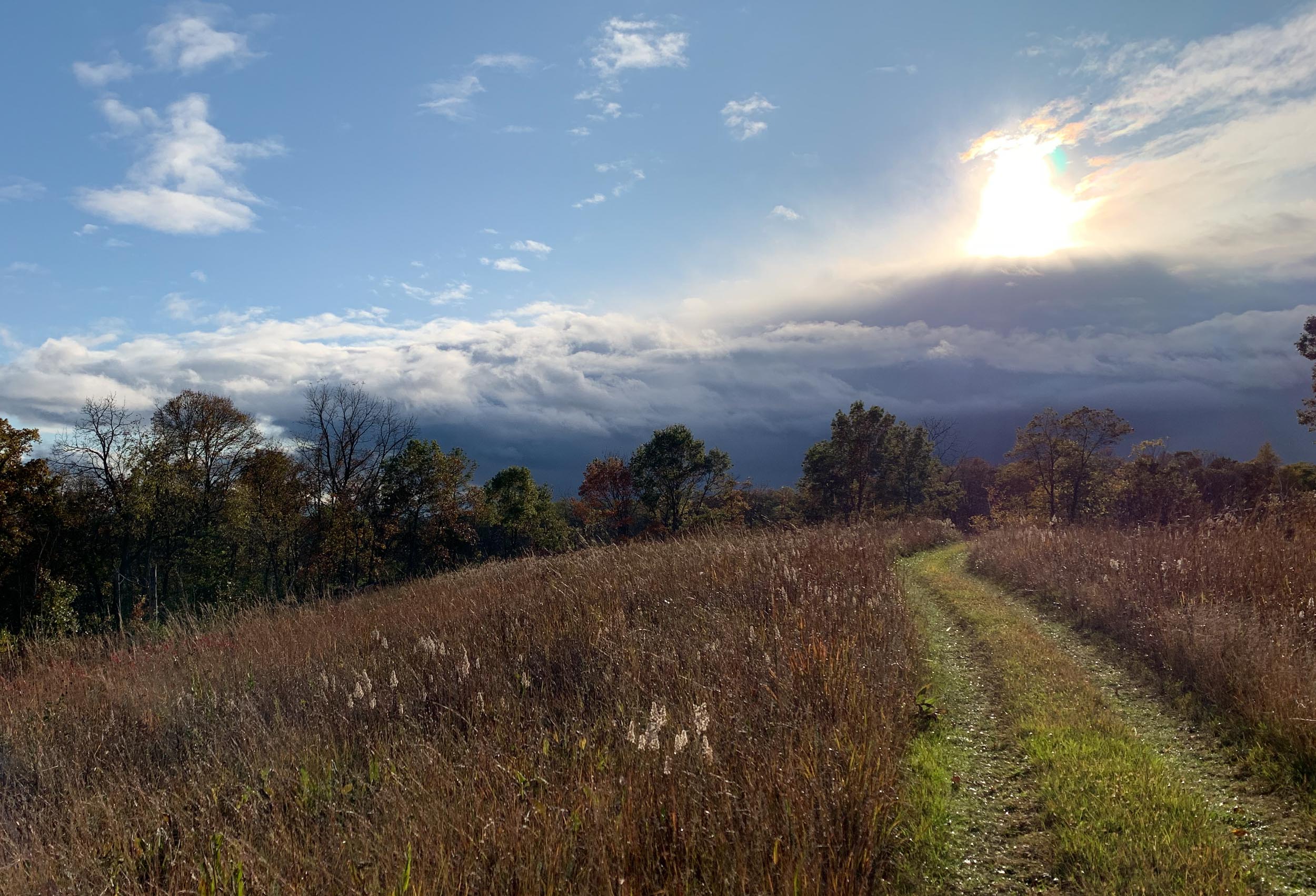