It was a stormy weekend at the farm – there wasn’t enough snow to plant until Monday, when it snowed hard most of the day. I did get a couple of the wetland areas planted before the snow.
So I finished cleaning and sorting all the rest of the seeds, and cleaned up the basement for the next project. I’m going to strip the table that I bought for the cabin – it might end up being the coffee table for the porch if it turns out well.

I took a walk up on top and found an interesting spot on the Buffalo Ridge field – it looks like the beginnings of a giant ant mound. An area about 2 feet across is disturbed, with a bumpy surface, and a texture that looks like ant tunnels. All the plants on top of it are gone so, with no snow, it was very obvious. This is a close-up of the texture of the dirt 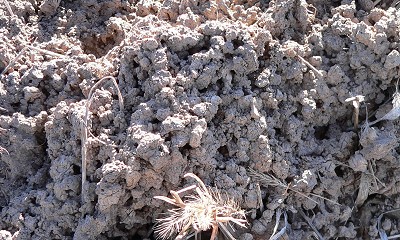 All around leading up to it are tunnels in the dirt – they have dirt bottoms and open tops, or the tops are open with some grass leaves stretched across. I think the tunnels must be made by voles – I’ve been reading about them, and it looks like the kinds of tunnels they make.

Here’s one along the ground 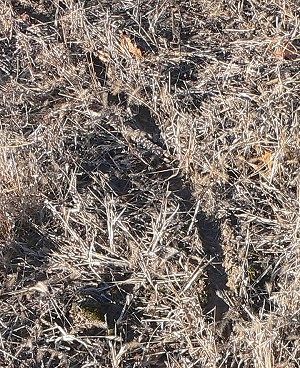 That ends up going into a hole in the dirt. 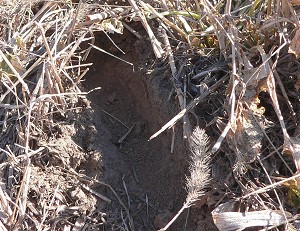 I found the cardinal nest from the scrubby woods on the edge of Indian Grass Prairie. It was in the fork of a honeysuckle – so honeysuckle has some uses – and has birch bark woven into it on one side, and oak leaves on the other. 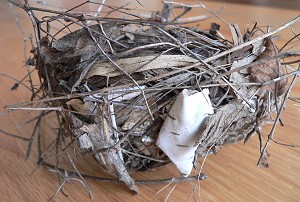 and here’s the inside of the nest 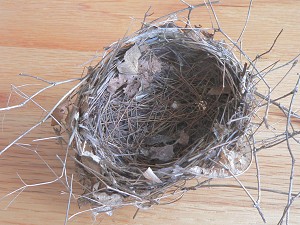 I also found a big new animal den in the woods near the top of the cabin road – very freshly dug with a big pile of sand in front of it, and several large rocks strewn around it and in the road.

It was so cold on Sunday that all the entrances to the woodchuck’s house were coated with frost. 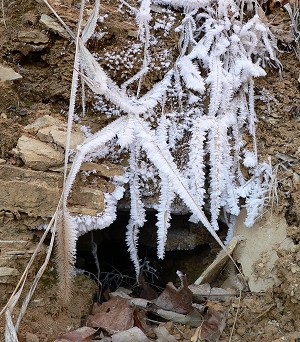