It was a relatively warm weekend, but there was still enough snow to plant, so I got a lot done. The field is now half planted – if I really have to, I can get the rest done in 2 weekends.
We had a lot of nice animal adventures this weekend. A Bald Eagle landed in East Center Valley Prairie, while another eagle soared overhead. I wonder if one of the deer was killed there, and the eagle was interested in the remains – but I didn’t go up to look.

There are two animals who share the spoils under the birdfeeder deck. One is a beautiful Fox Squirrel – this photo isn’t great – it was taken through the window – but at least you can see its gorgeous red-gold tail. 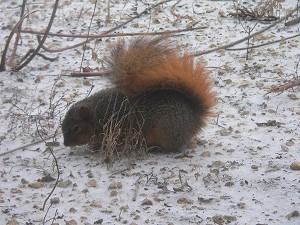 The other visitor is a young opossum. This is the first week we’ve noticed it, but I think it’s been coming frequently, because it has made a well worn trail coming from under the Box Elder tree. When I get close it freezes – it clearly thinks it’s invisible. And then after a bit it moves very slowly away – very funny to watch. I didn’t realize opossums have such bright pink feet. 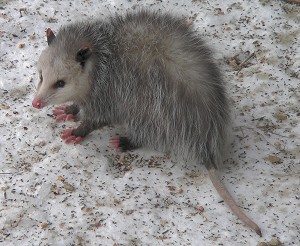 I took a couple long walks up to the top to scatter some of the special seeds – Showy Penstemon and Wood Betony. On the way down the cabin road I found myself suddenly in the middle of a chattering flock of Chickadees. The were interested in something on the side of the road. As I was inspecting – I think it was a pile of deer innards – one of the Chickadees zipped past my shoulder, almost touching me. It landed on the ground, about 4 inches from my feet. I stood, frozen still, and watched 4 Chickadees eating and chirping right at my feet.

The Knife Edge looks beautiful in the misty light that happens on warm winter mornings. 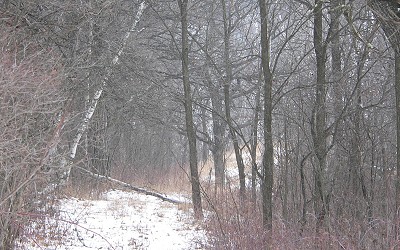 And I saw a Bald Eagle far away at the top of Big View Prairie.