We had our first snow of the season this weekend.
It snowed on Friday night and Saturday, so we drove down through it – the roads near the farm hadn’t been plowed, and it was slow going. There were only a few inches on the ground, so we didn’t have any trouble getting in the driveway. It was so beautiful – the trees on the bluffs were covered with white – I think some of it was frost, as well as snow – it was as though there were clouds sitting on the hillsides in some places, making all the trees white.

On Sunday Jackie and I took a long walk on her land. It was snowy and not too cold, and the trees were all snow covered. She was looking for her Christmas tree – they have a tradition of cutting a flowering tree, putting it in water inside, and decorating it. If they cut the tree just after Thanksgiving, it blooms at Christmas. Crab apple trees are her favorite kind, and they have dozens of them on their land. She picked a nice one, then Dan came with his tractor and cut it down, and carried it back in the bucket. I took the cuttings – the branches they cut off so it would fit into the living room. It will be fun to have flowering branches from the same tree.

Here’s Jackie on one of her hillsides 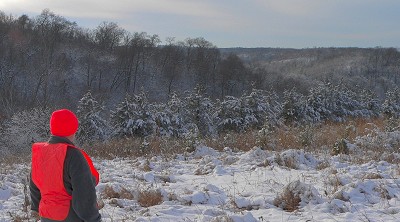 We saw a flock of Cedar Waxwings in the crab apple trees – they were very calm – sitting in the top of one of the trees and waiting for us to leave so they could continue their feast. 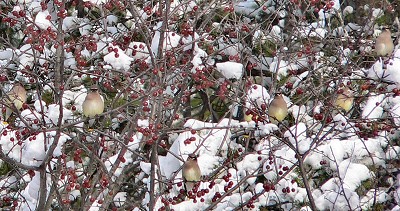 I worked hard dividing seeds all weekend, and they were all ready to go up on the hill by Monday morning. Jackie called and said that people had seen a bear on the land next to ours, so we wired the garbage cans tight shut – I don’t think the bear would be interested in the seeds, but it might knock the cans over, and I don’t want the mice to be able to get in.

On Monday we drove the cans up to the top of the hill in the gator. We were a little worried that the gator might not make it through the snow, but we made it all the way without even going into 4 wheel drive – what a useful machine. I stayed and planted for a while – it was a perfect day – 30 degrees and sun that kept coming out from behind the clouds. There were holes in the snow with weeds poking through and frost crystals all around them. 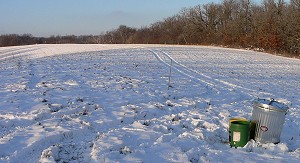 On the way down the hill I stopped to look at the snow and take pictures – the sky had completely cleared, and the winter sun made long shadows and lighted up the prairie grasses. 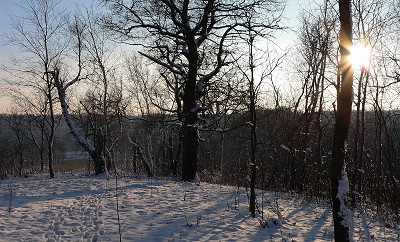 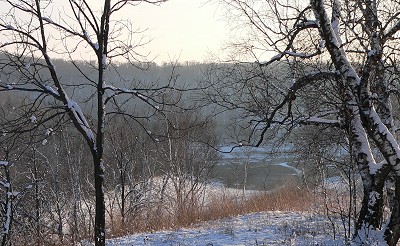