The hot weather has arrived, along with bright sun, fast moving storms, and misty mornings. 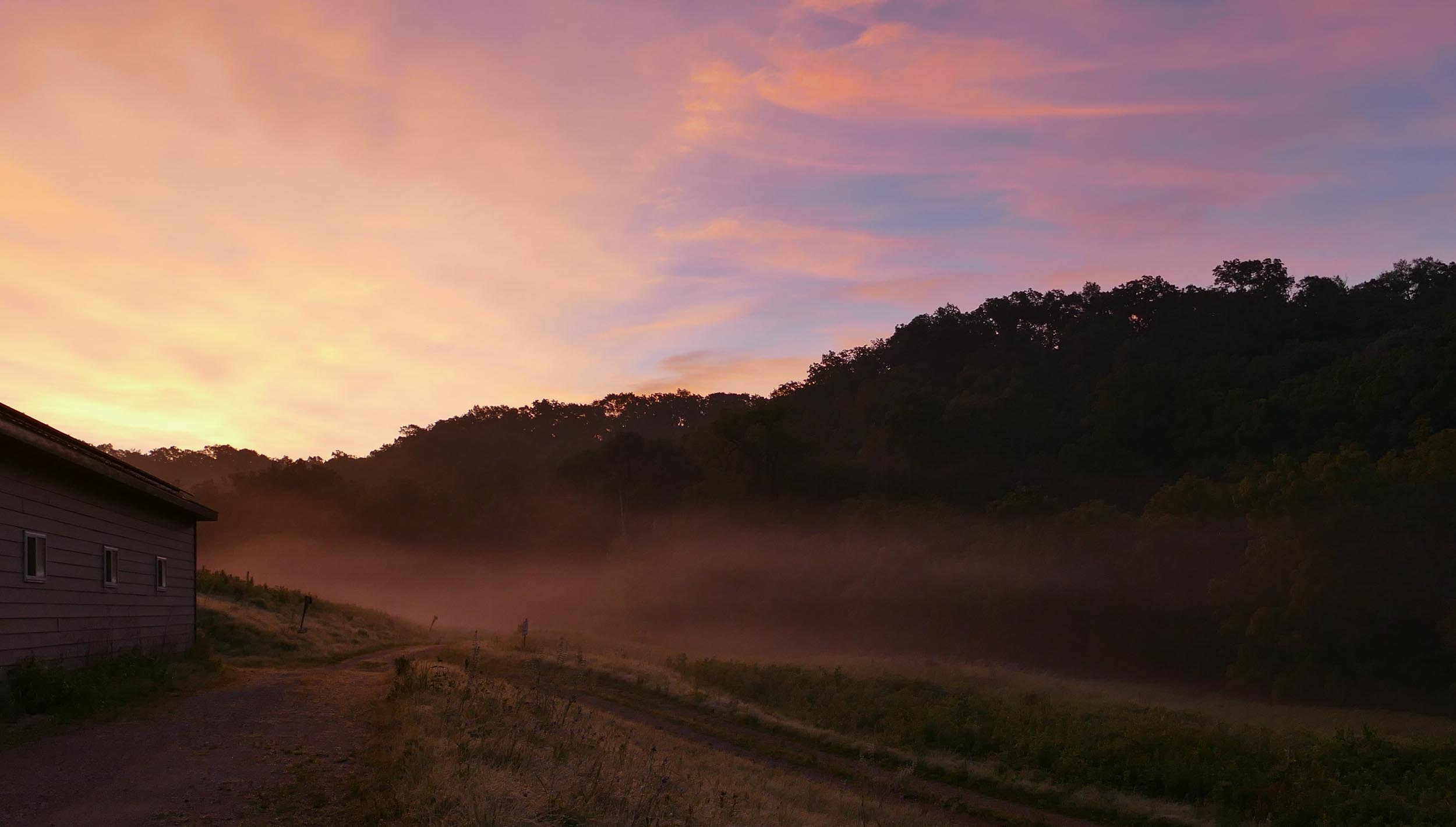 The butterflies are back on the driveway – a few weeks later than usual.  They usually appear about the middle of June, but the early summer was so cool that we didn’t see driveway butterflies until nearly the end of the month.  (Tiger Swallowtail, Baltimore Checkerspots, Silvery Checkerspots, and Northern Crescents) 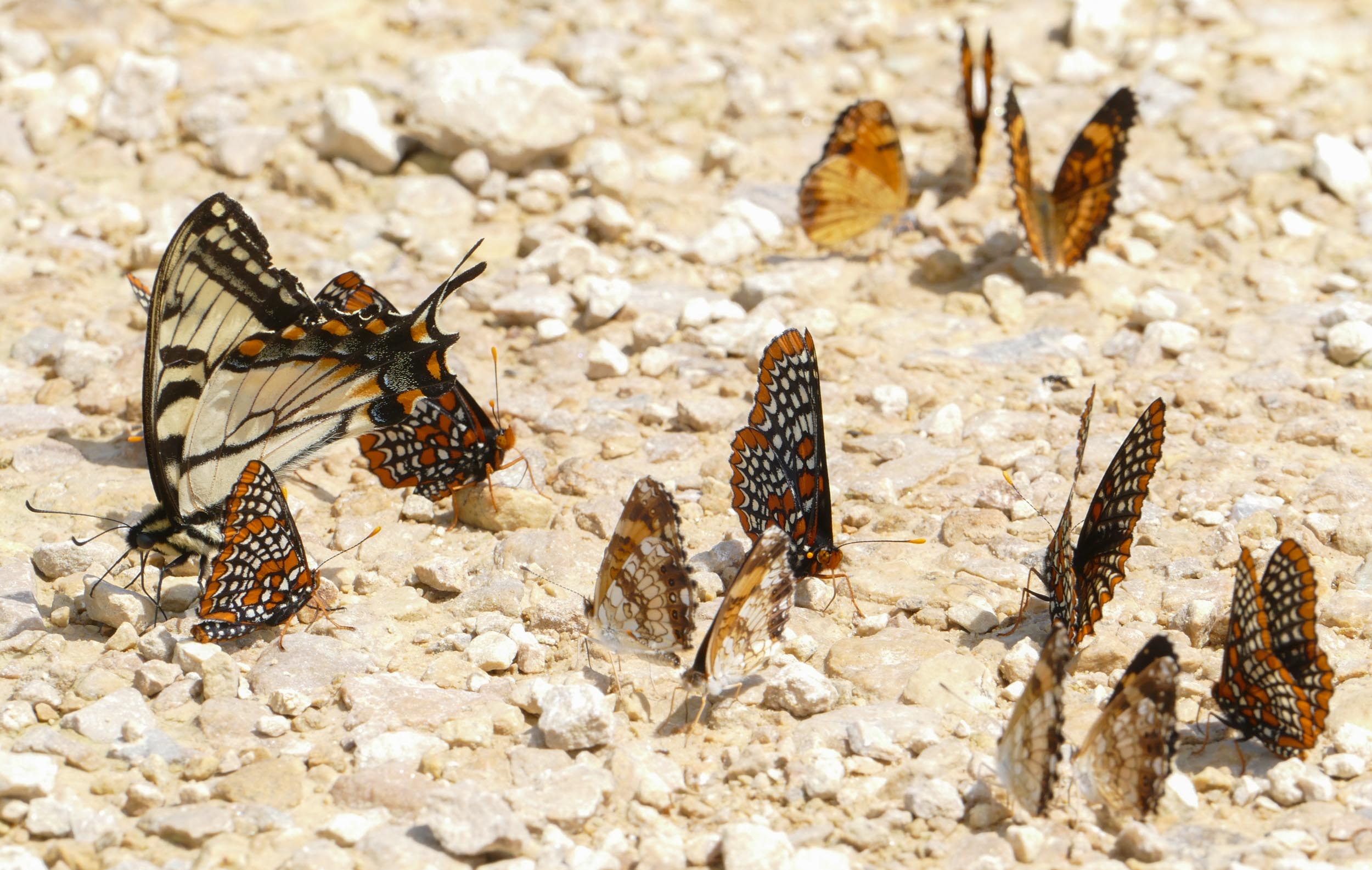 This group was on the gravel right in front of the garage door.  We have to be careful when we close the door, that we don’t trap any butterflies inside. (Northern Crescents, Silvery Checkerspots and Great Spangled Fritillaries)

Tawny Emperor – a species that we don’t see often. 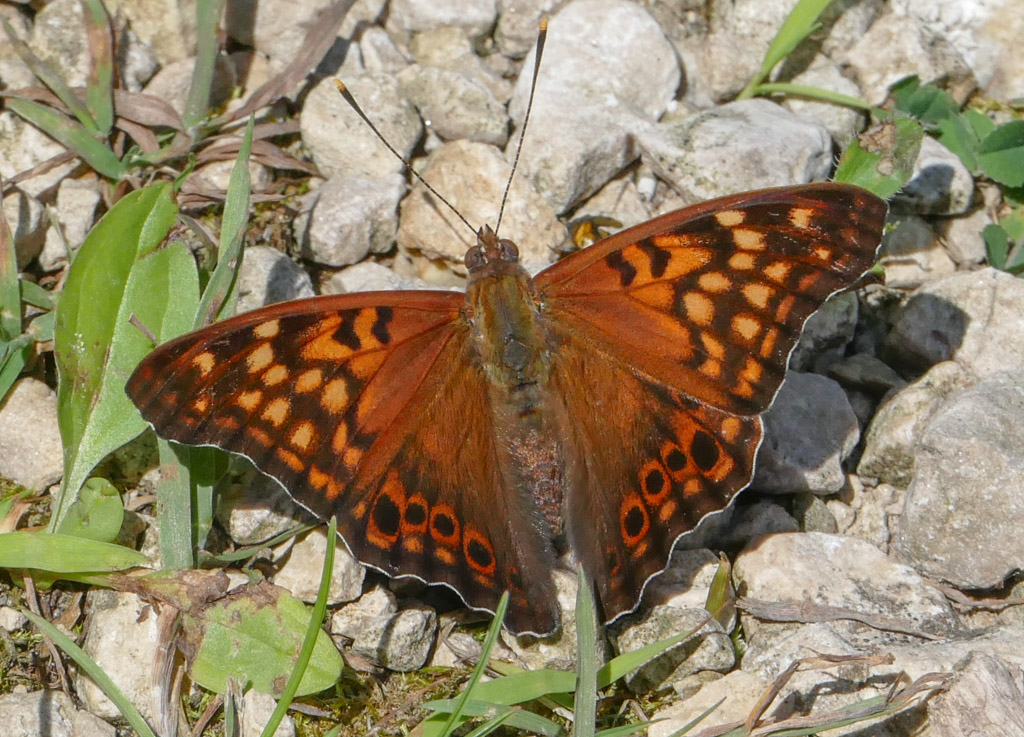 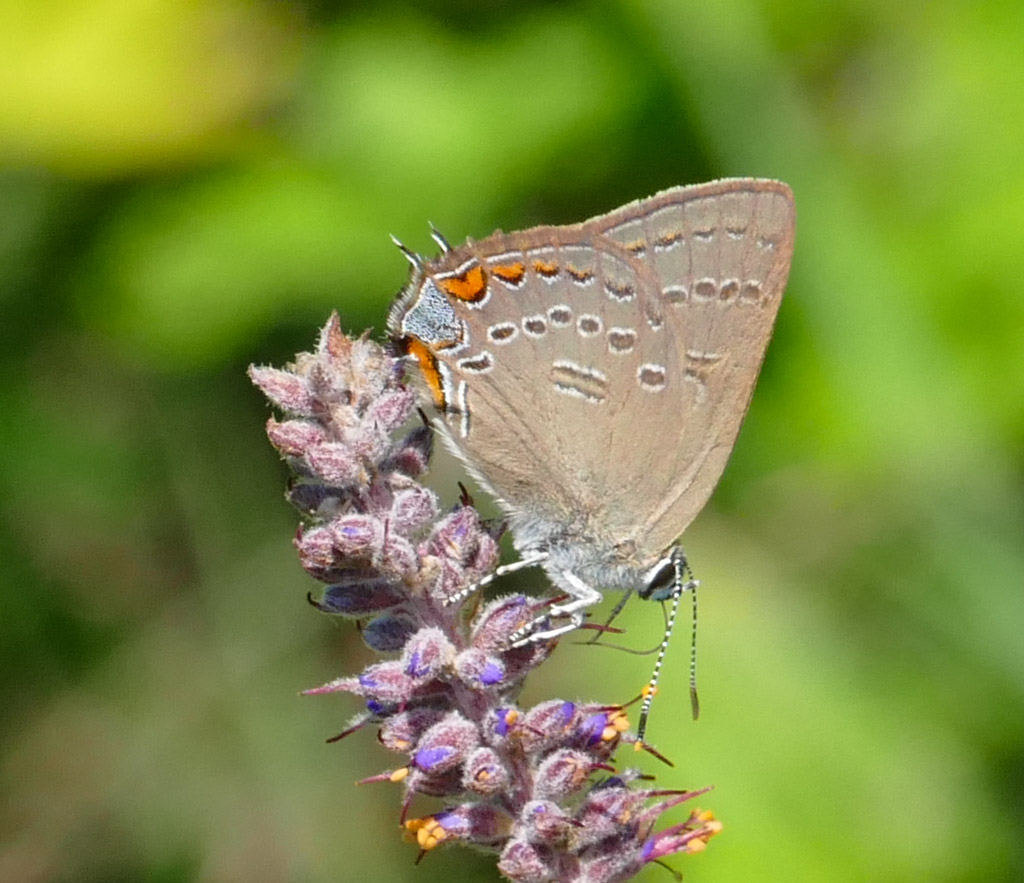 This has been a good summer for Painted Lady butterflies.  I’ve been finding their caterpillar nests on thistle plants, and a few days ago I found this chrysalis – well hidden among the thistle leaves. 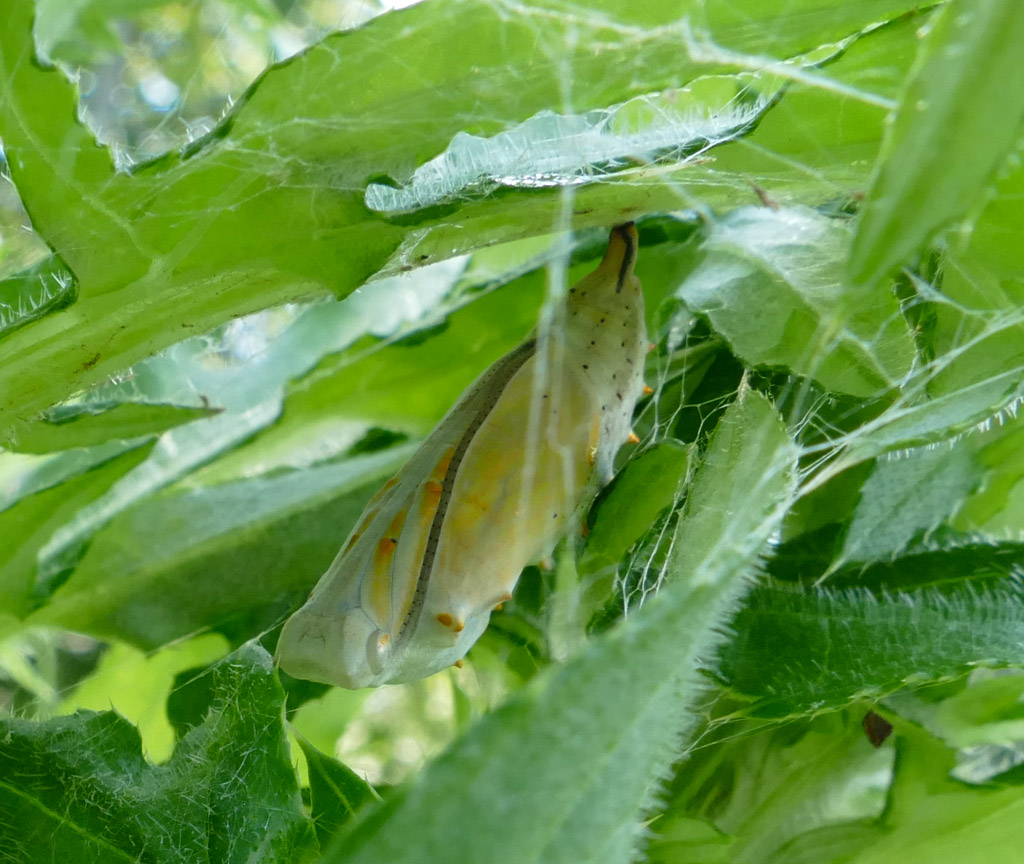 The summer flowers are all blooming. 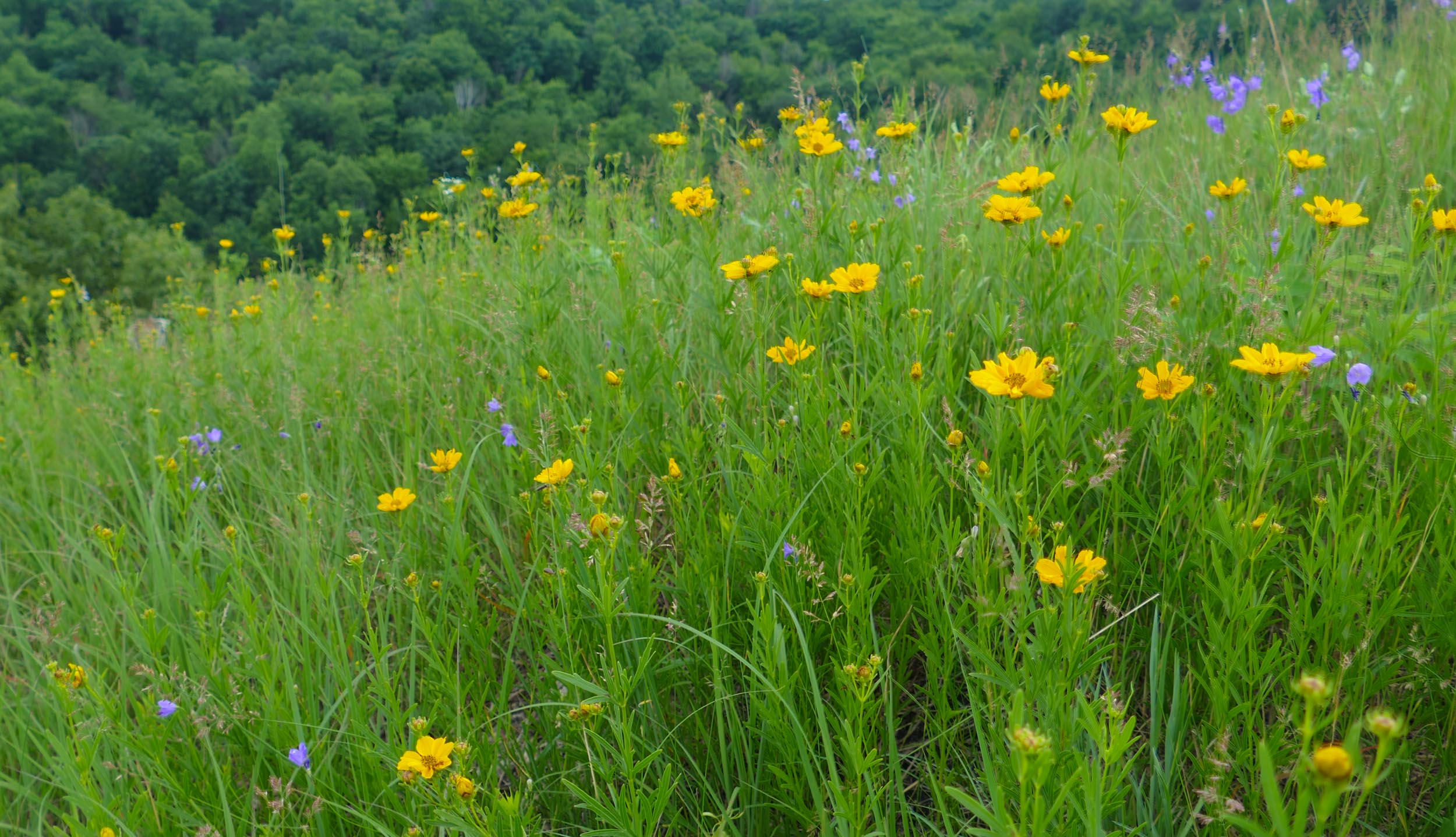 This is Pale Purple Coneflower – a species that’s only native as far north as southern Wisconsin.  I didn’t intentionally plant it, but I just found it growing in one of our planted prairies – probably from a stray seed that got mixed in by mistake. 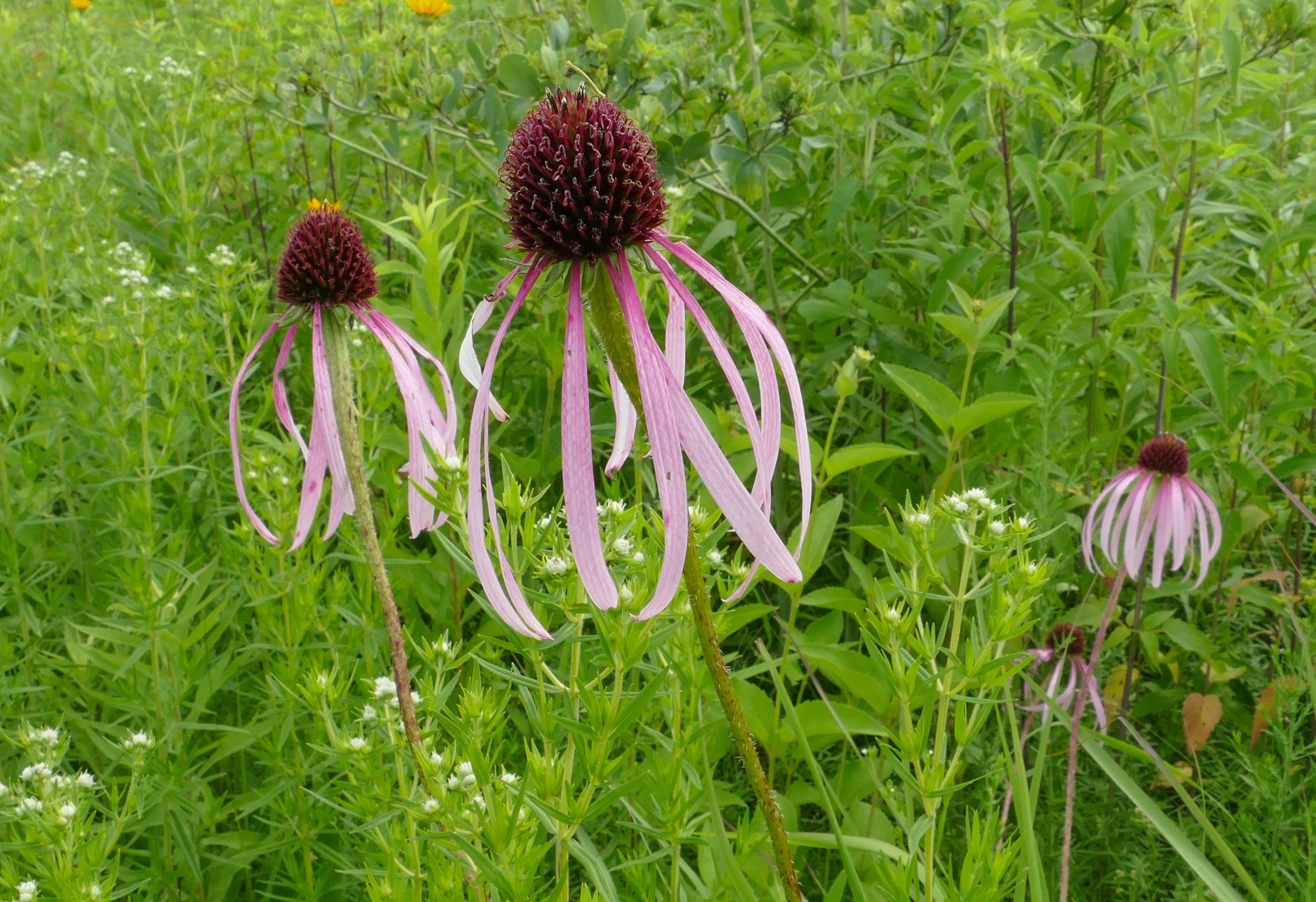 Hill’s Thistle – from a plant that a friend gave me several years ago.  It’s considered a threatened species in Wisconsin.  I have about 10 plants scattered around our restored remnants, and 3 of them bloomed this year. 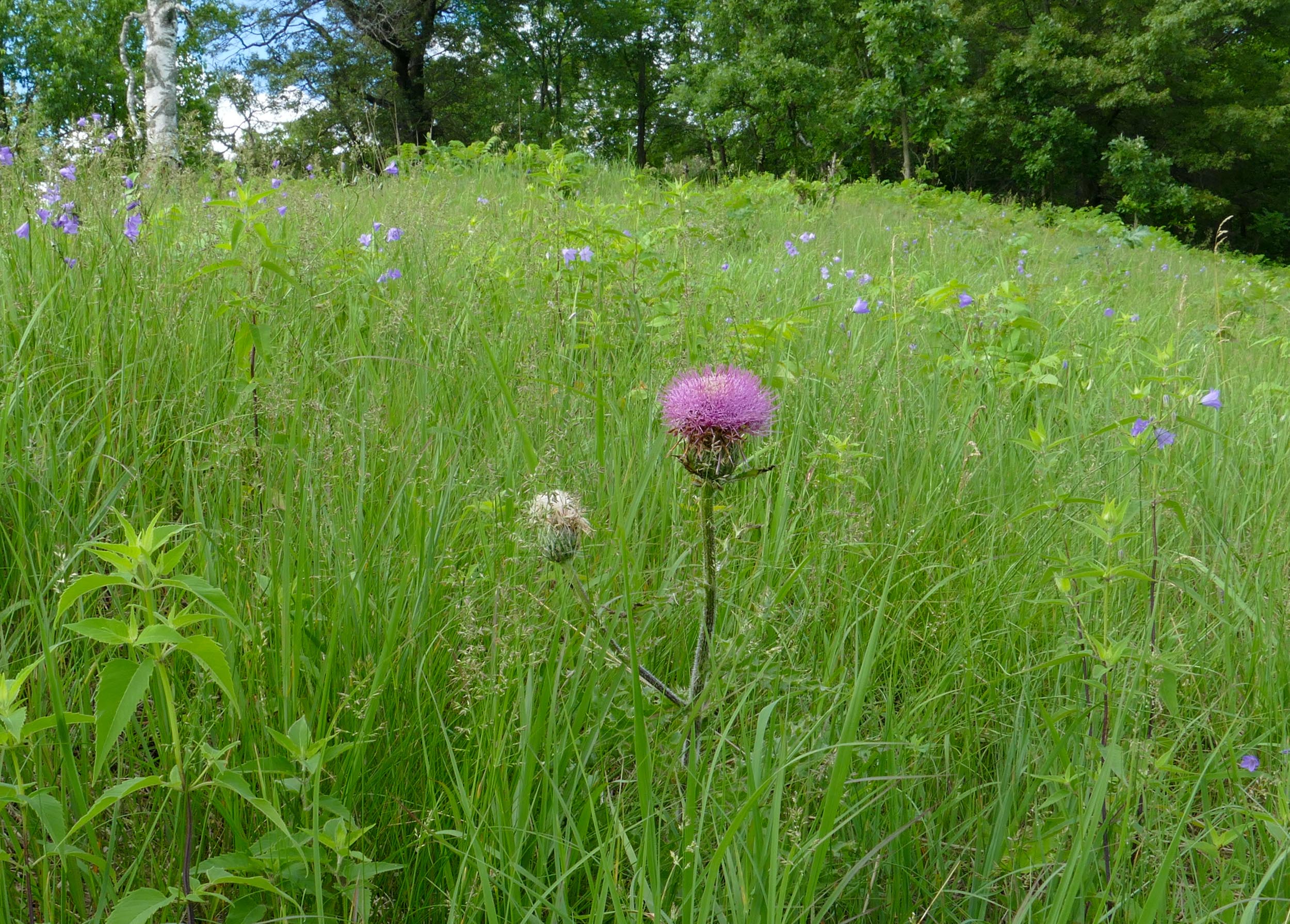 The flower heads are huge and showy – and soft – not as prickly as they look. 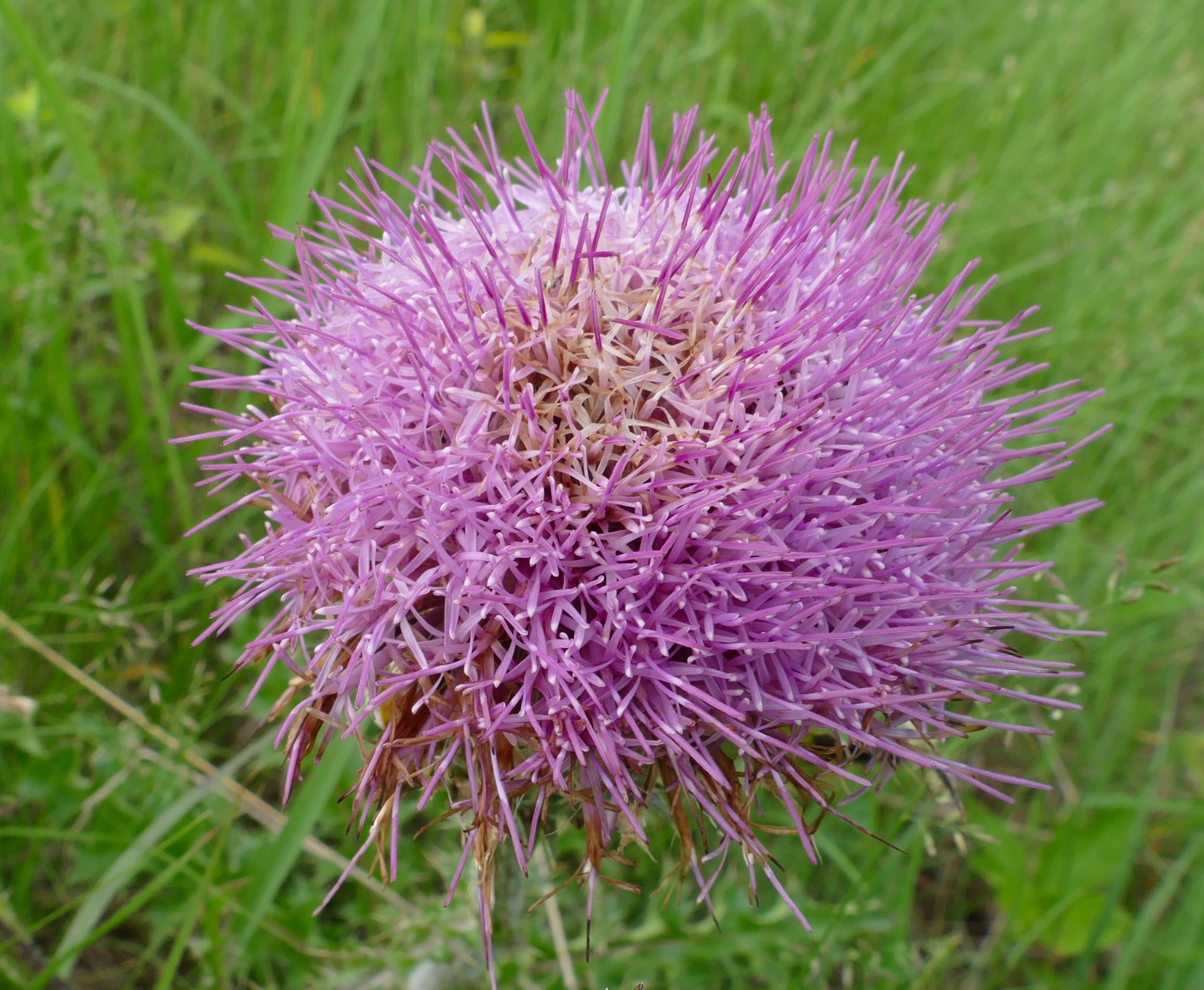 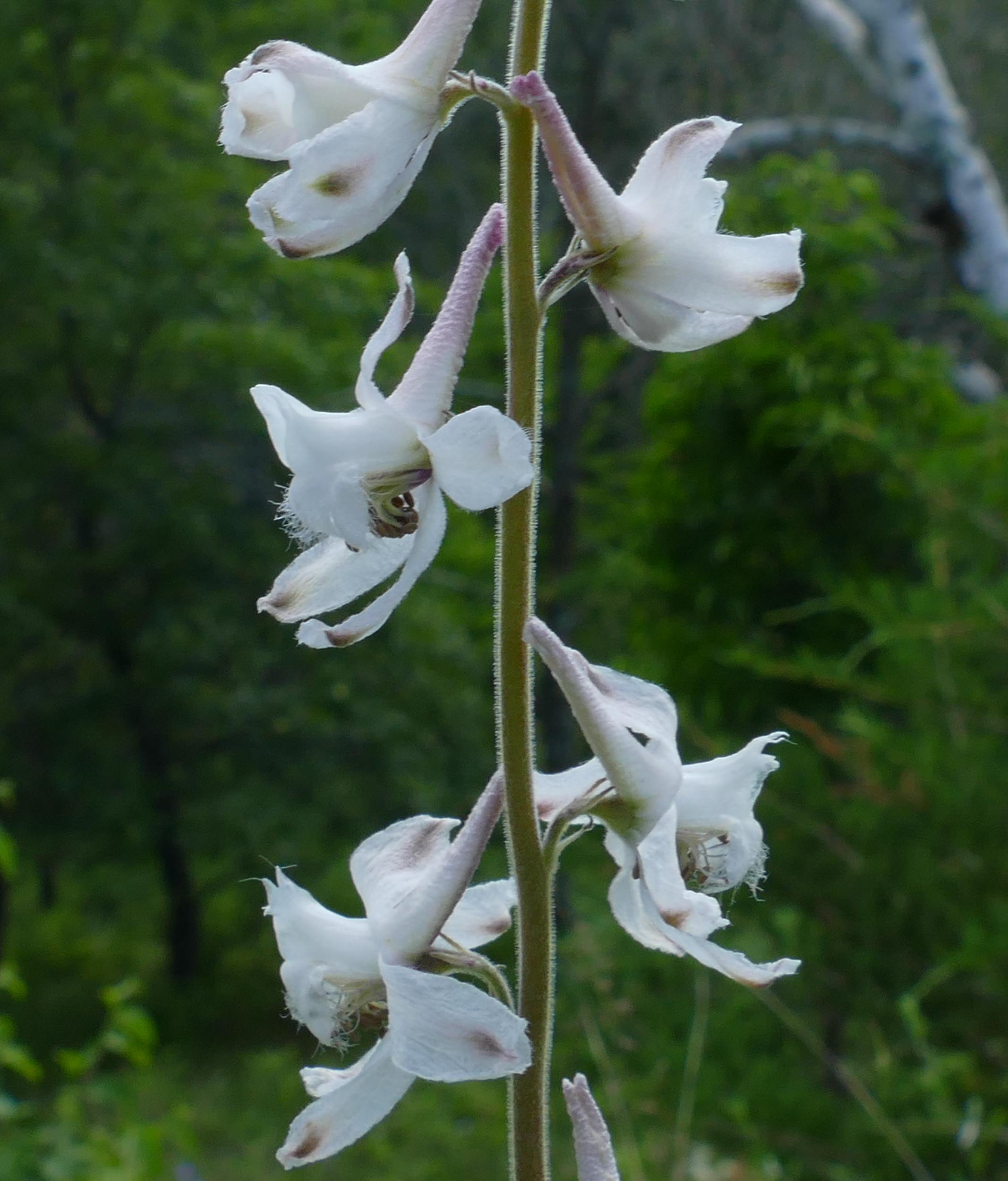 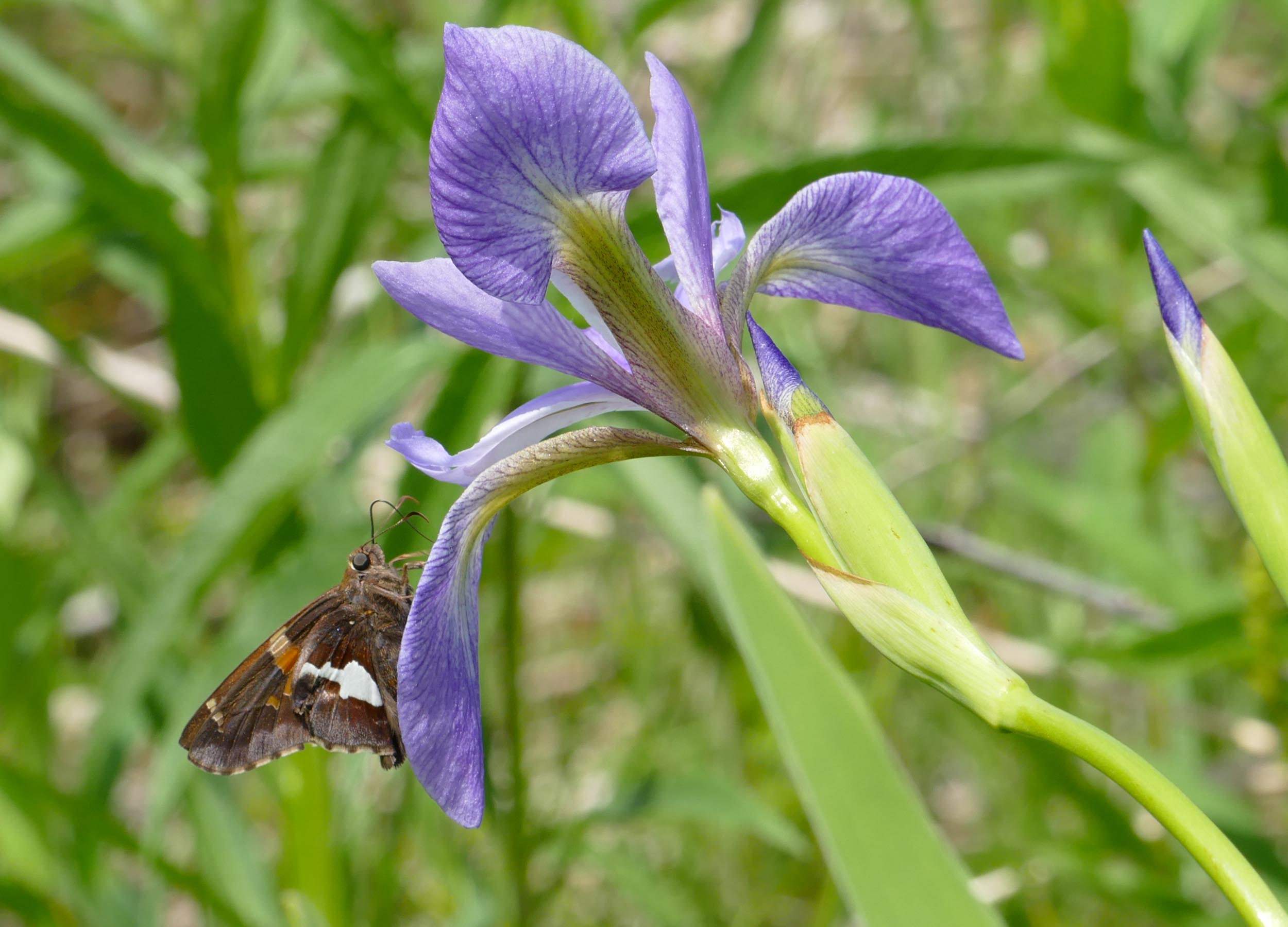 White Camas – the green patches on the flowers produce nectar and attract ants. 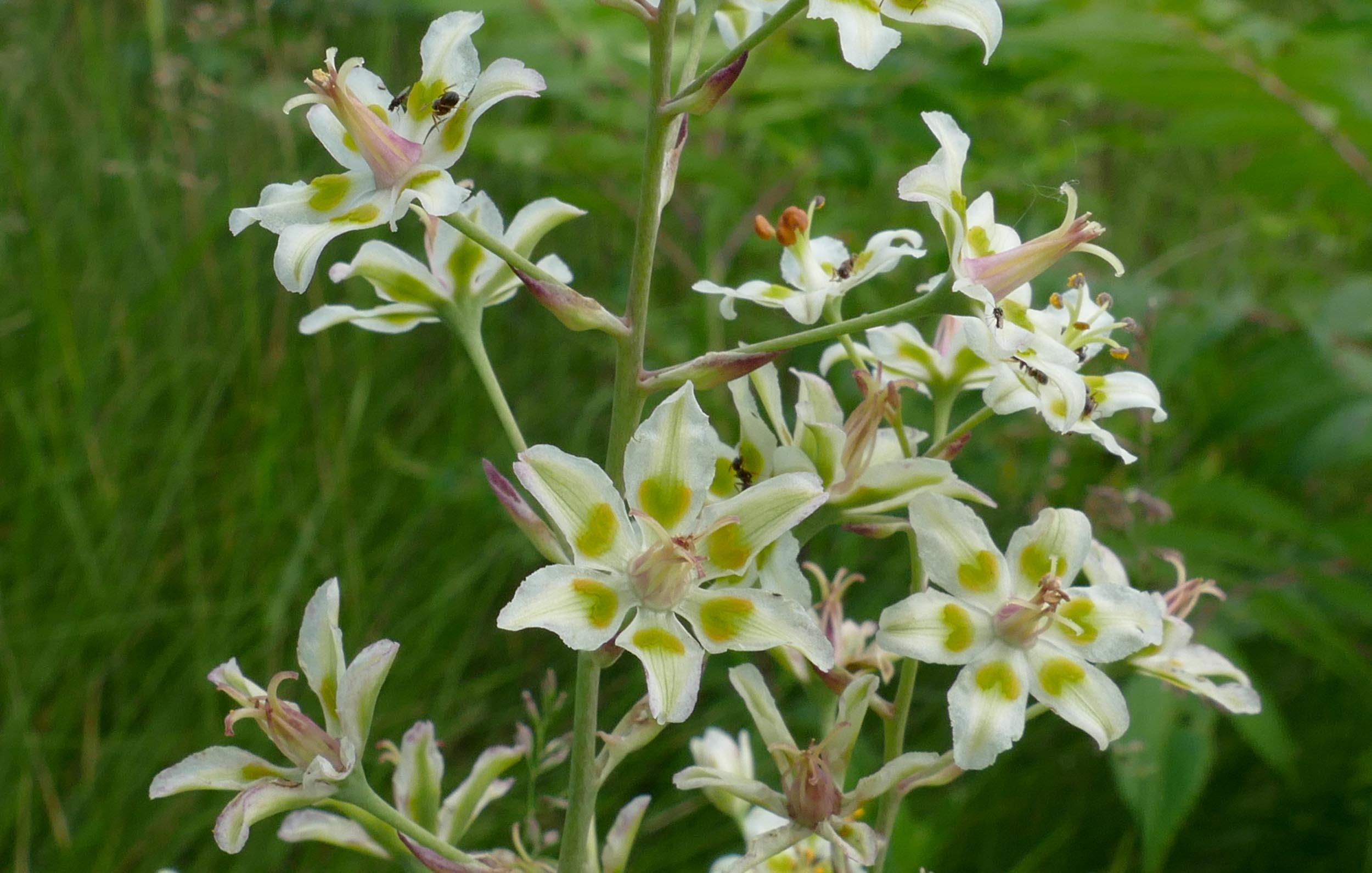 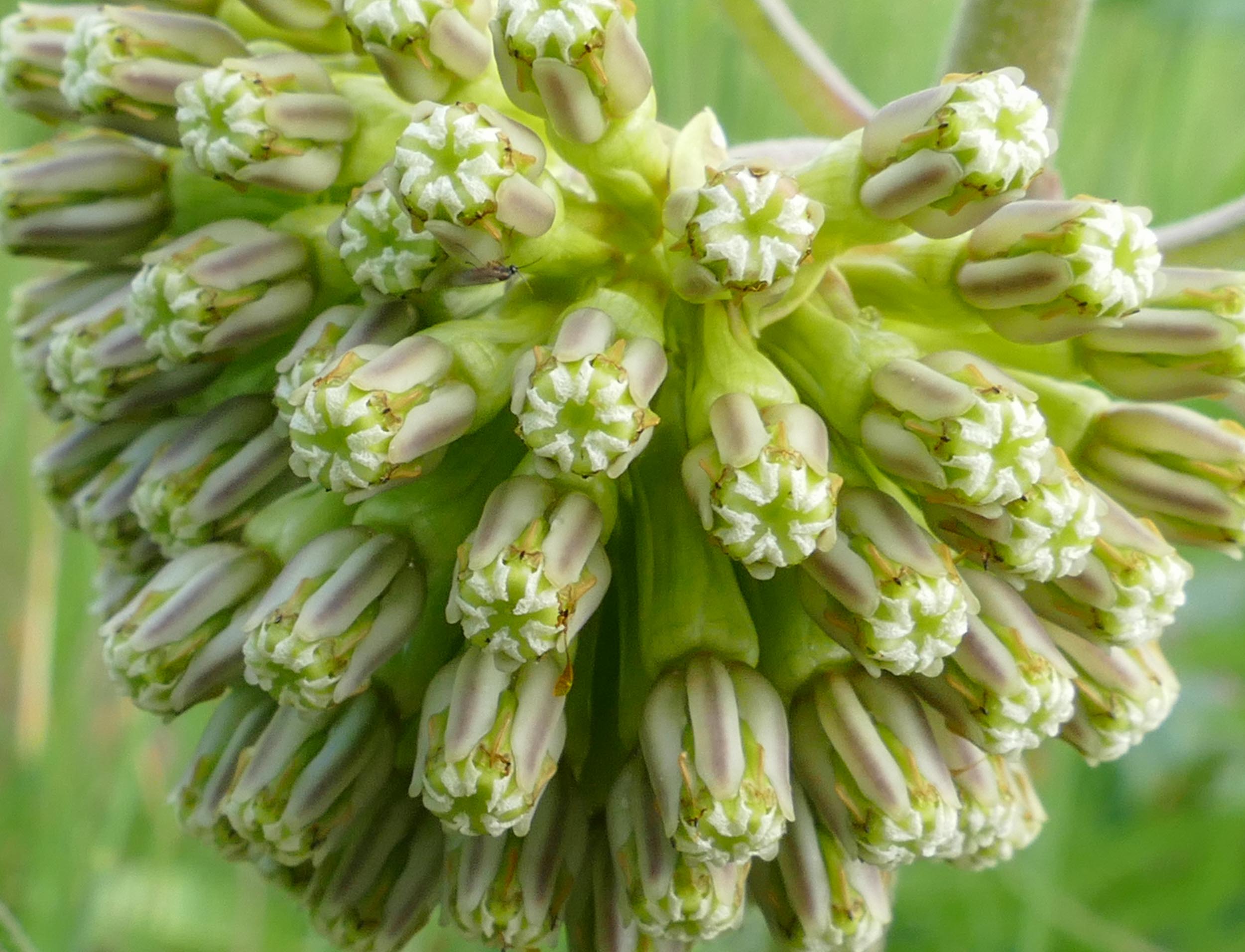 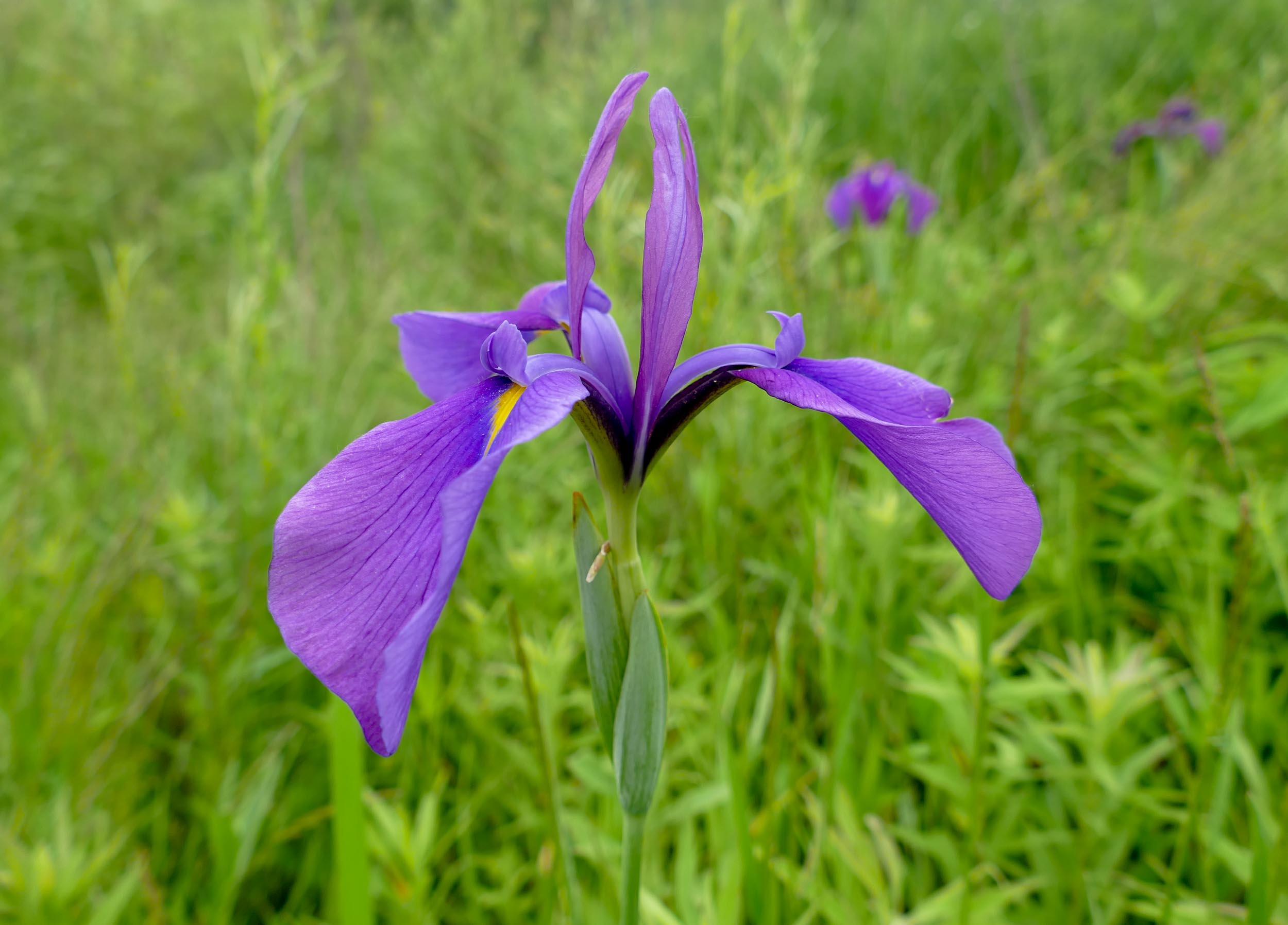 This is a good year for Spiderworts.  These are in Western Prairie.

Another view of summer in Western Prairie 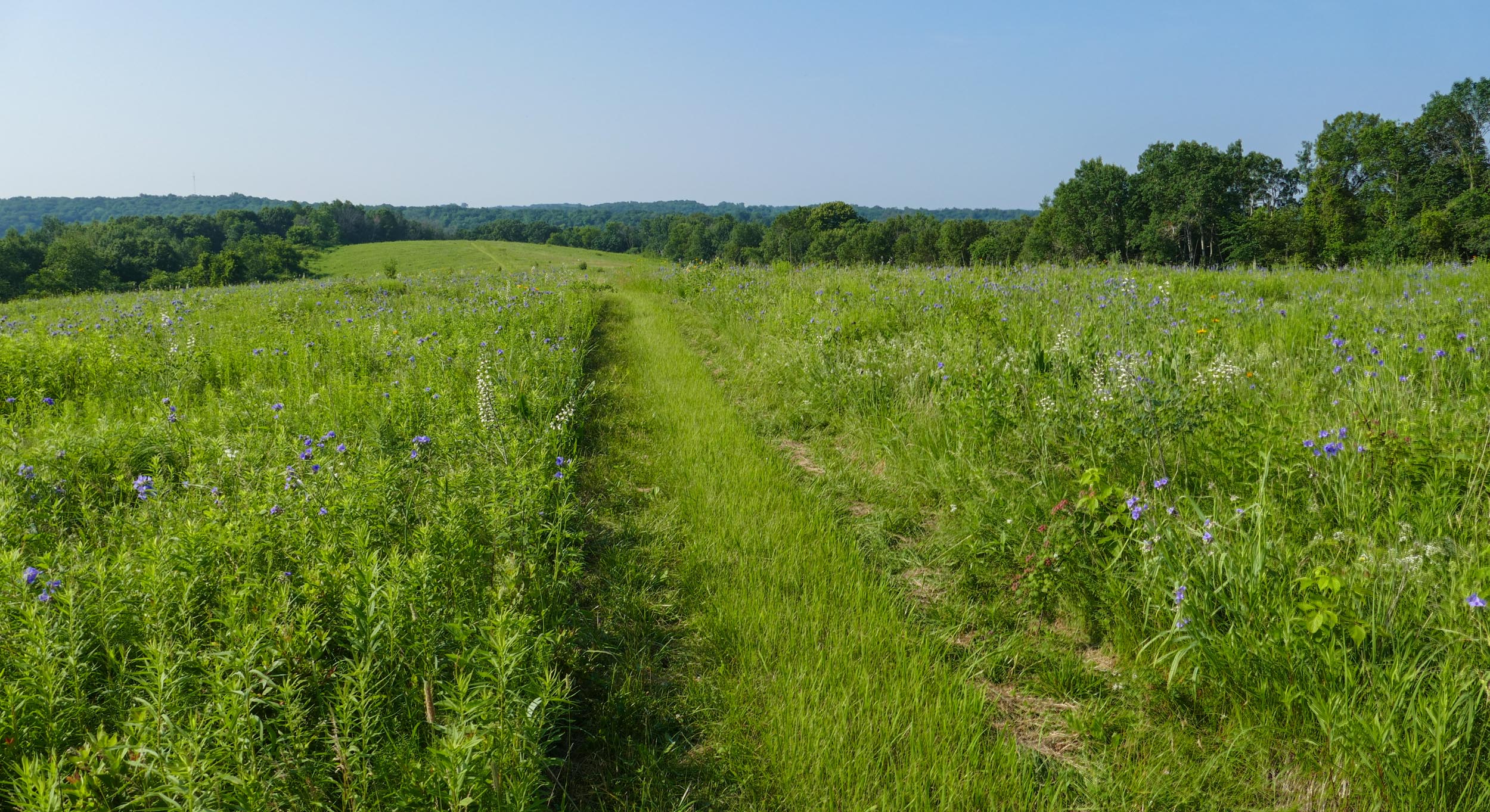 This is another unusual plant – a Wood Lily.  I planted some seeds a few years ago around the house and on the hillside behind it.  It’s hard to find the plants – they blend in with all the other vegetation, so I don’t know if they’ve come up.   But one day there was one blooming, right behind the house. 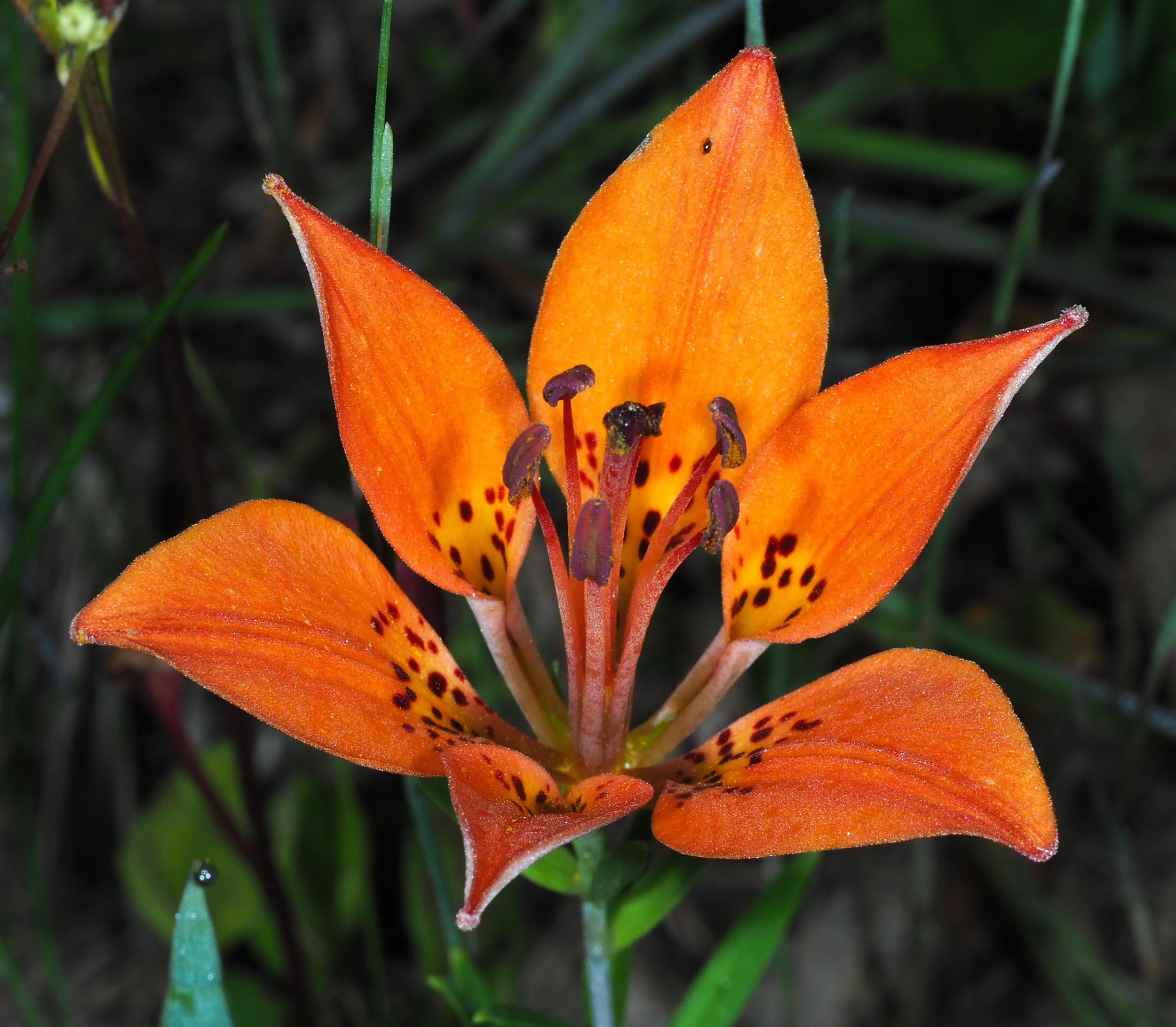 We’ve had some fun visitors, including Charley Eiseman and his wife Julia Blyth.  Charley has been working on an online book on leafminers, and was looking for more material.  They spent a lot of time wandering around – mostly in the rain – and then set up a lab (on one of my tables) to sort and photograph their specimens. 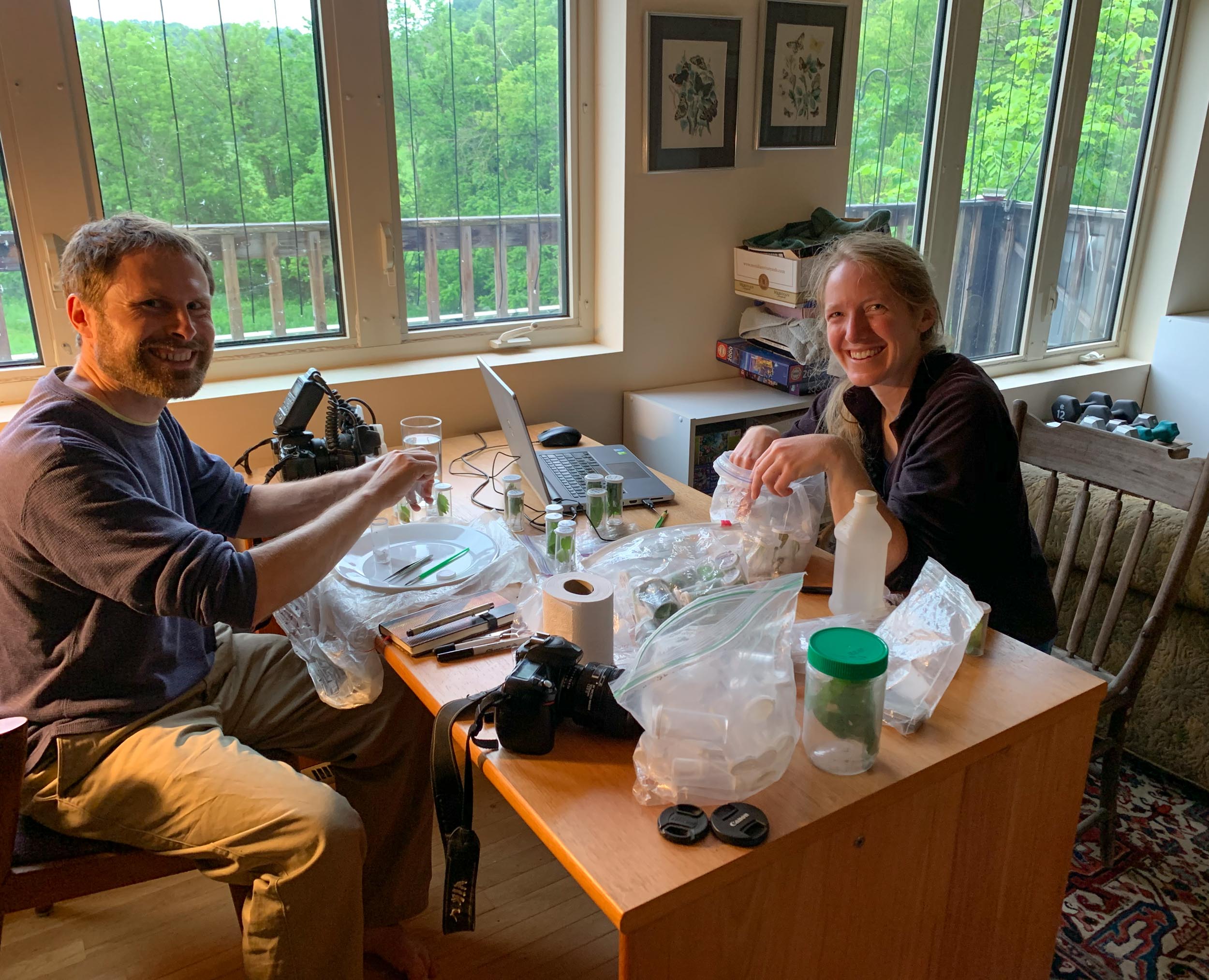 And on Saturday we did our annual butterfly count.  Here are the counters – still feeling cool and energetic just as we were starting out.  It was a very hot day so we didn’t look this good when we got back.

We saw many butterflies on the count – 38 species.  This is one – a Delaware Skipper in the wetland. 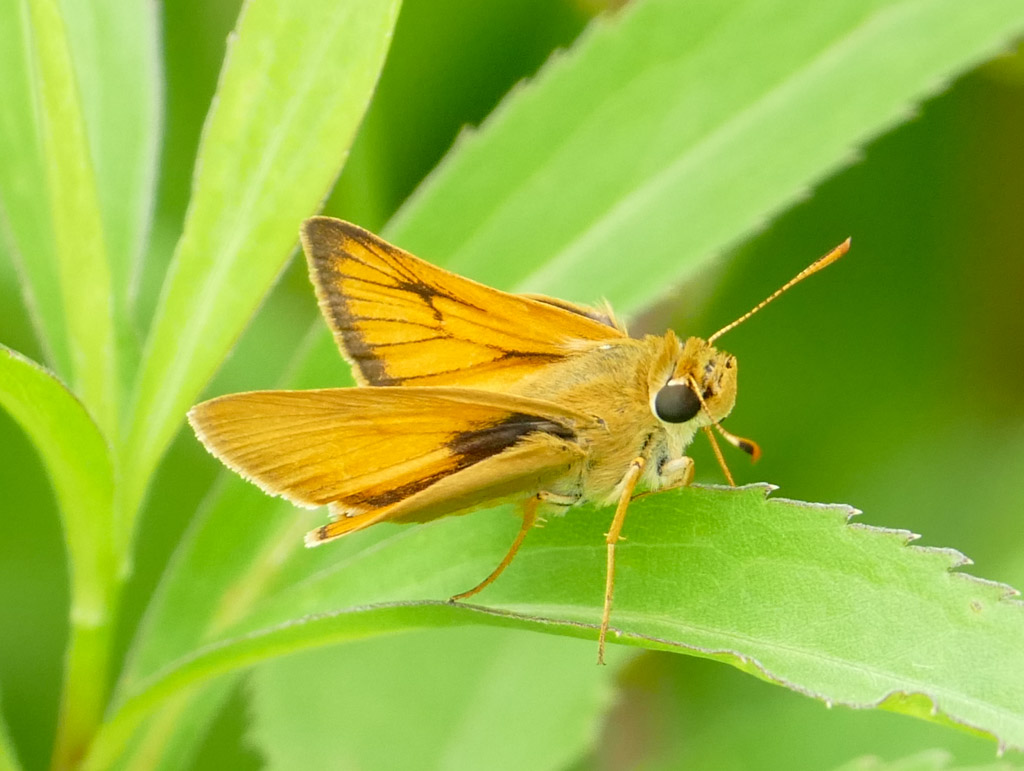 And a Least Skipper 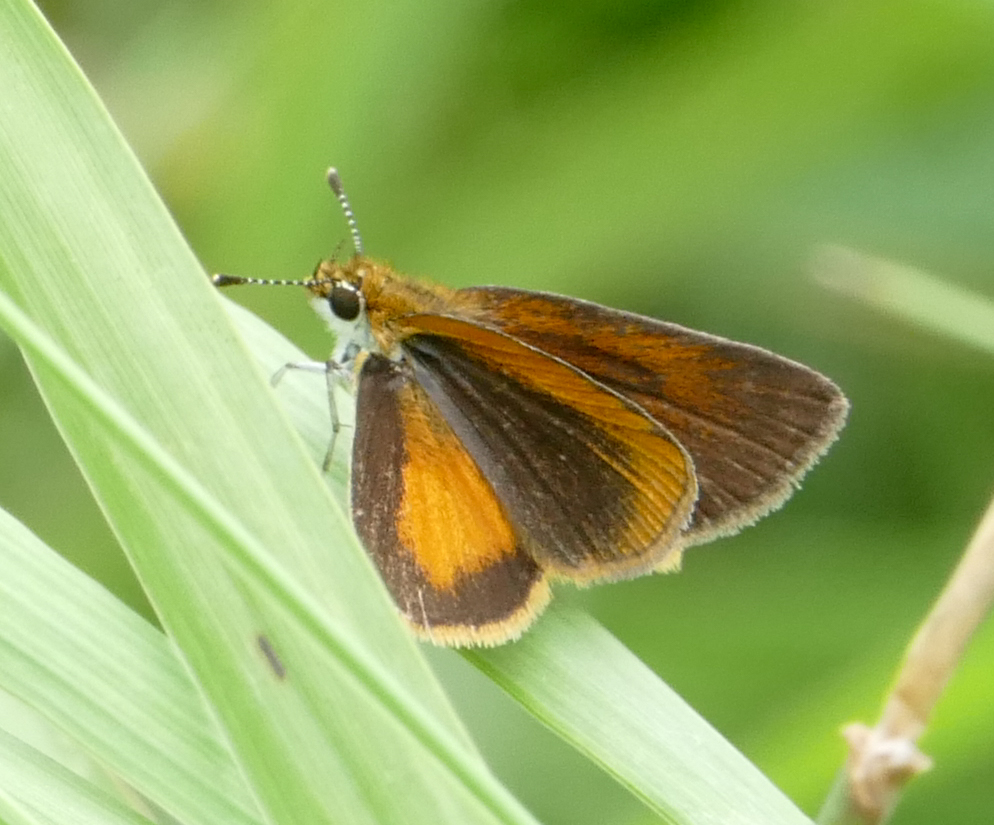 We saw other interesting creatures too.  This is a Round-necked Longhorn Beetle. 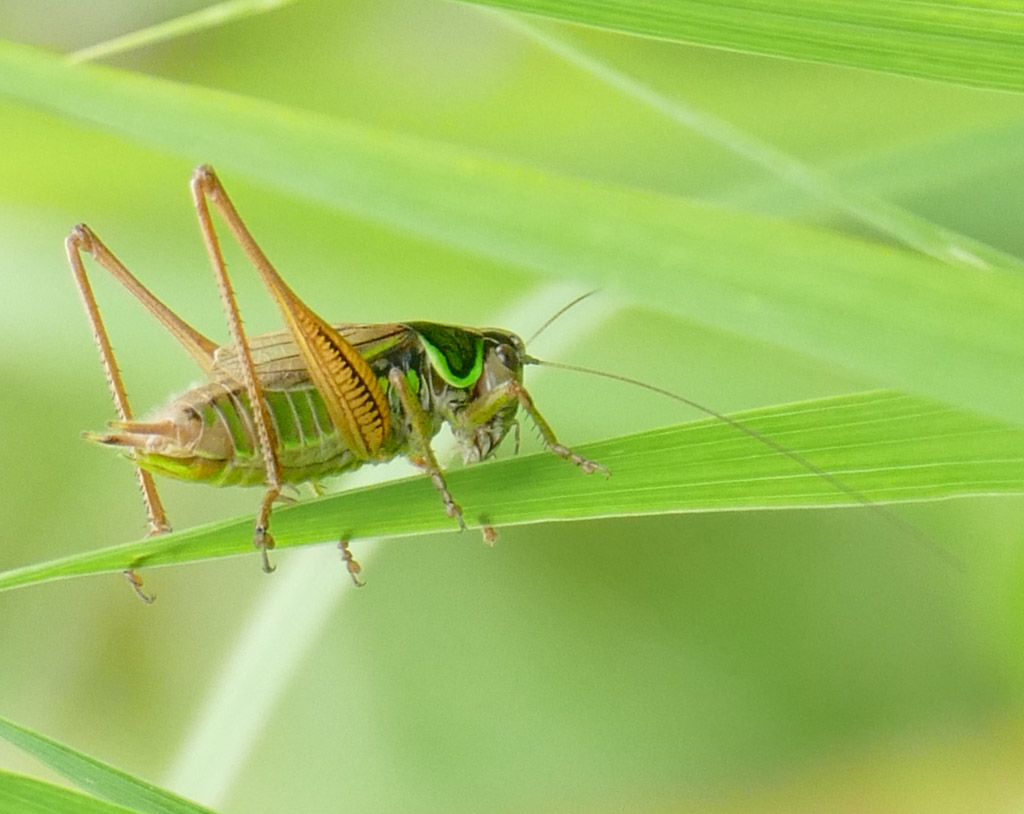 My project for the last few weeks has been pulling Wild Parsnip.  I’m feeling pretty good about it – there are many fewer plants than last year, and I’ve been able to work on some new areas.  Maybe one of these days we’ll be Parsnip-free.  Here’s a comparison….

This was taken of one of our wetland areas in 2007. 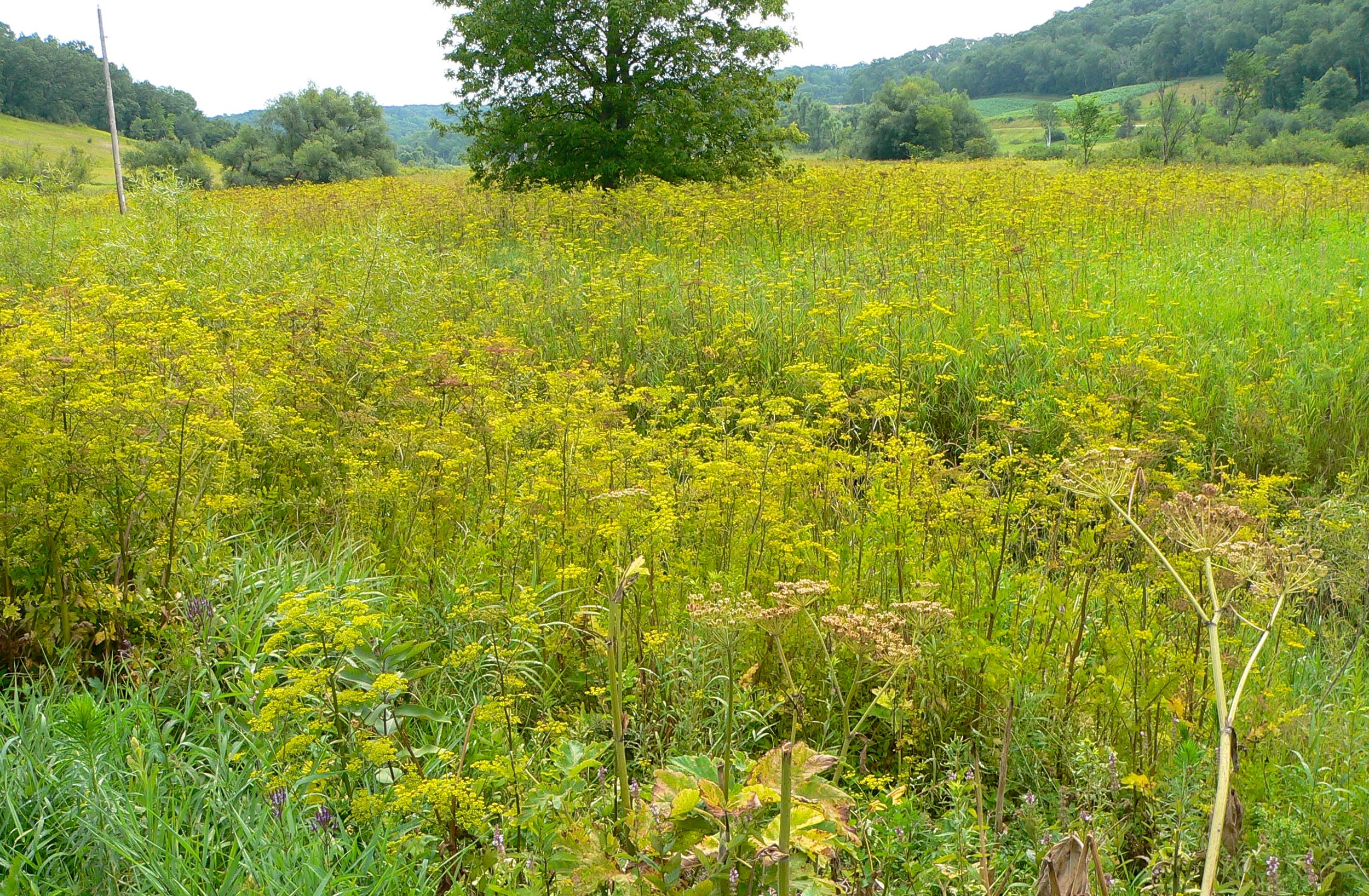 And this is the same area this year – before I’d pulled any parsnip.  Definitely better! 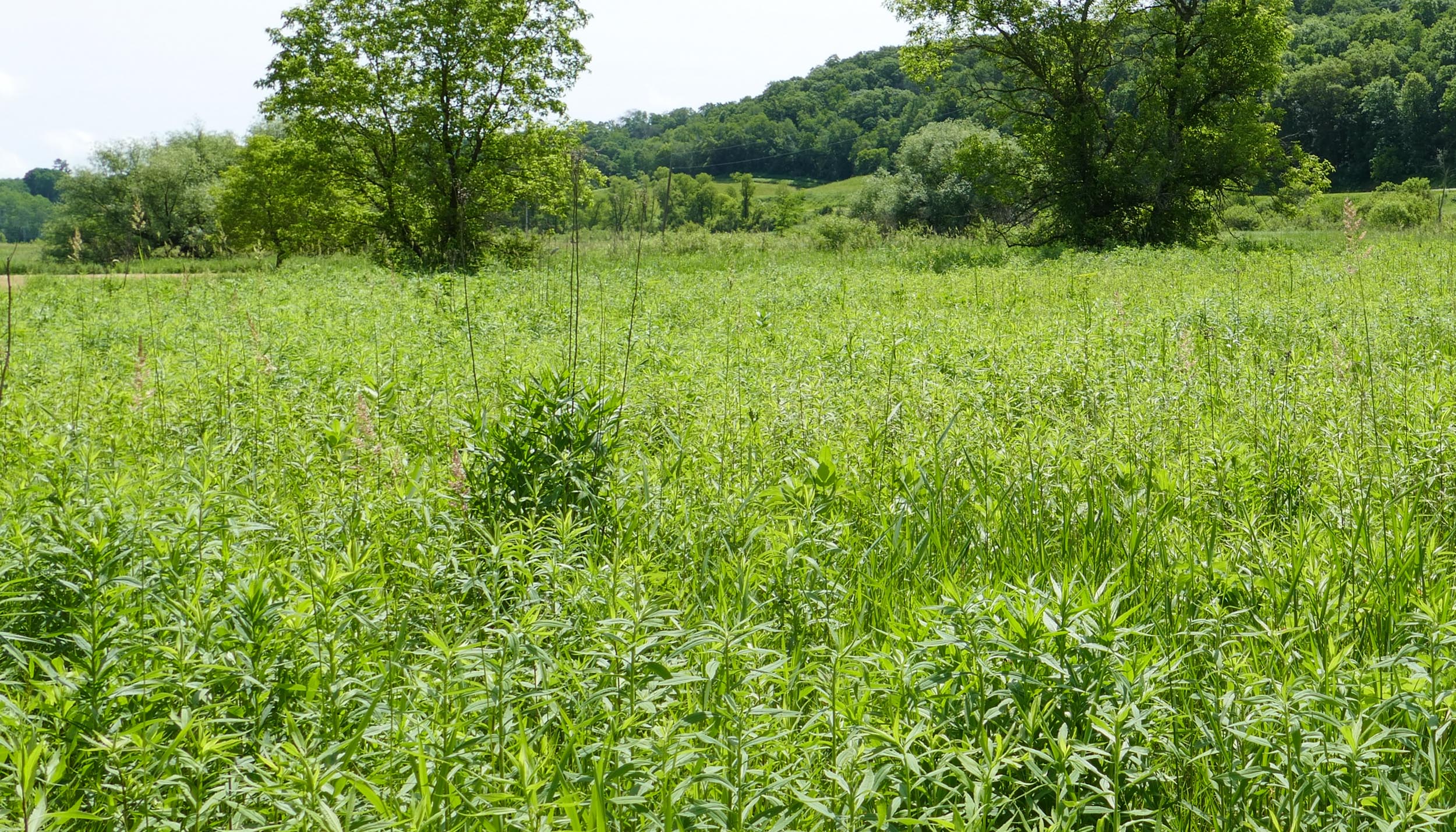 Mike has been taking out a beaver dam near our driveway for the last few days.  Here he is – looking like the troll under the bridge. 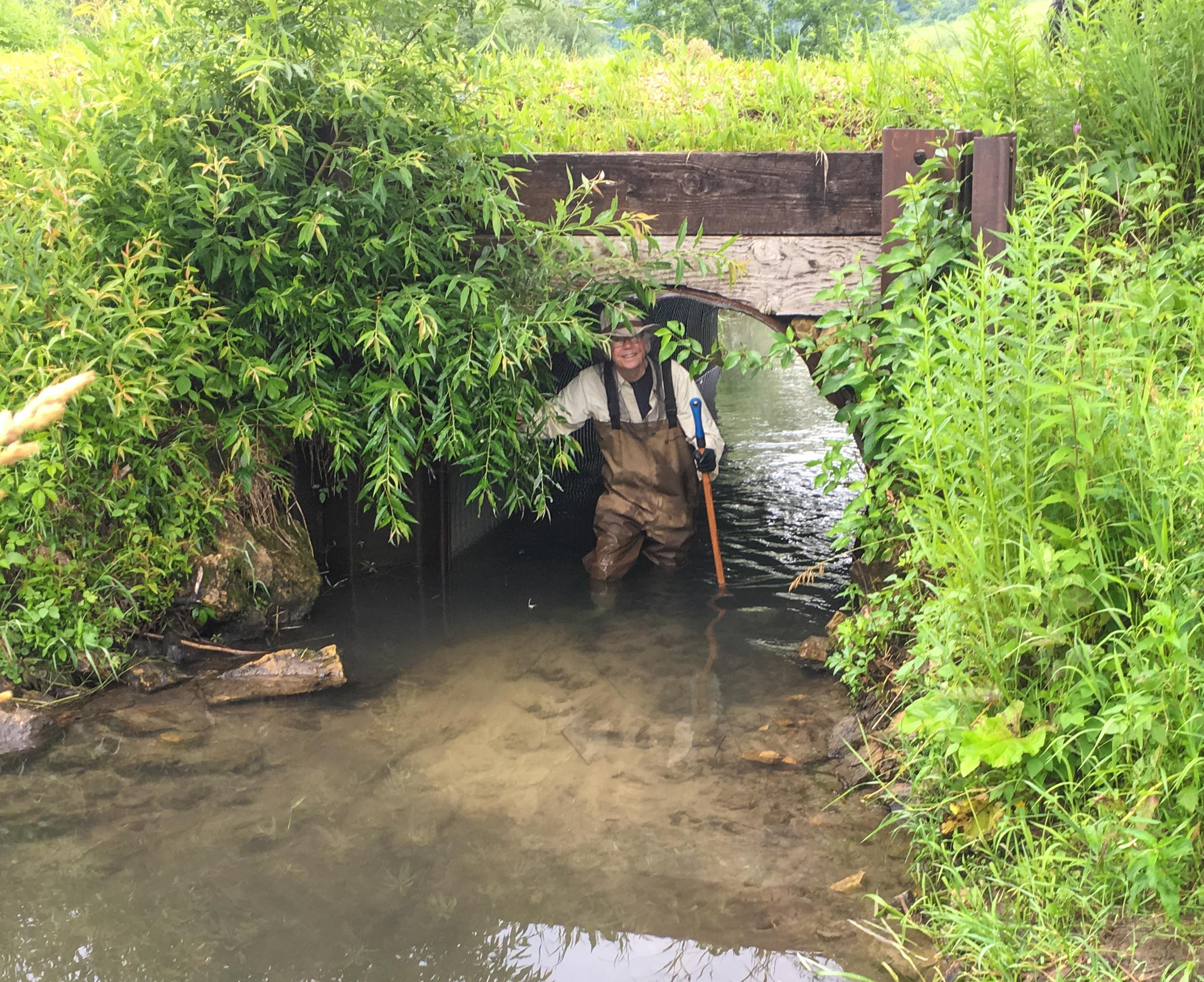 The bird babies are growing fast.  This is a baby Baltimore Oriole – looking almost grown up. 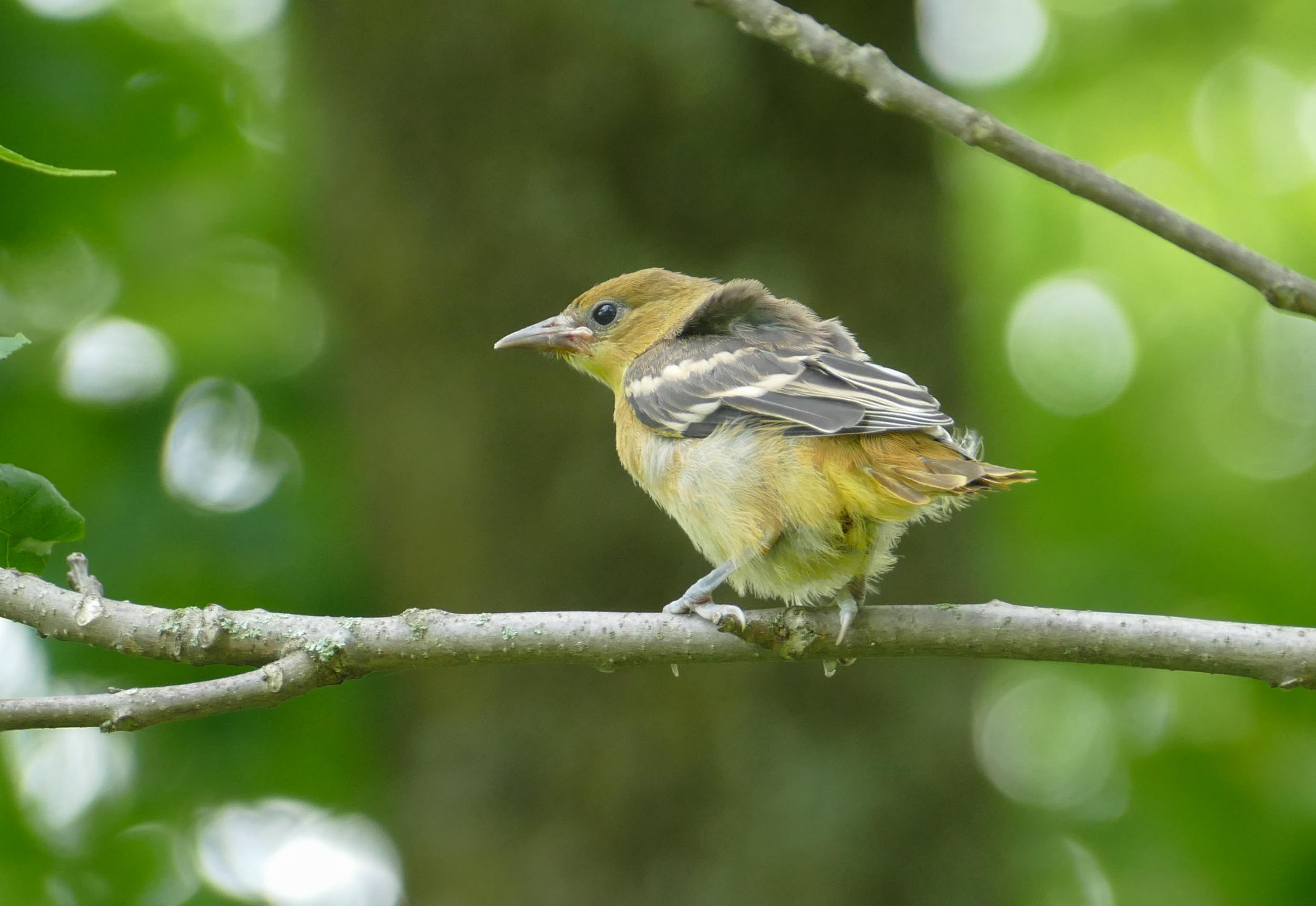 This year we have yarrow growing near the garage, so when I have the moth lights on, lots of creatures like to sit on the flowers. 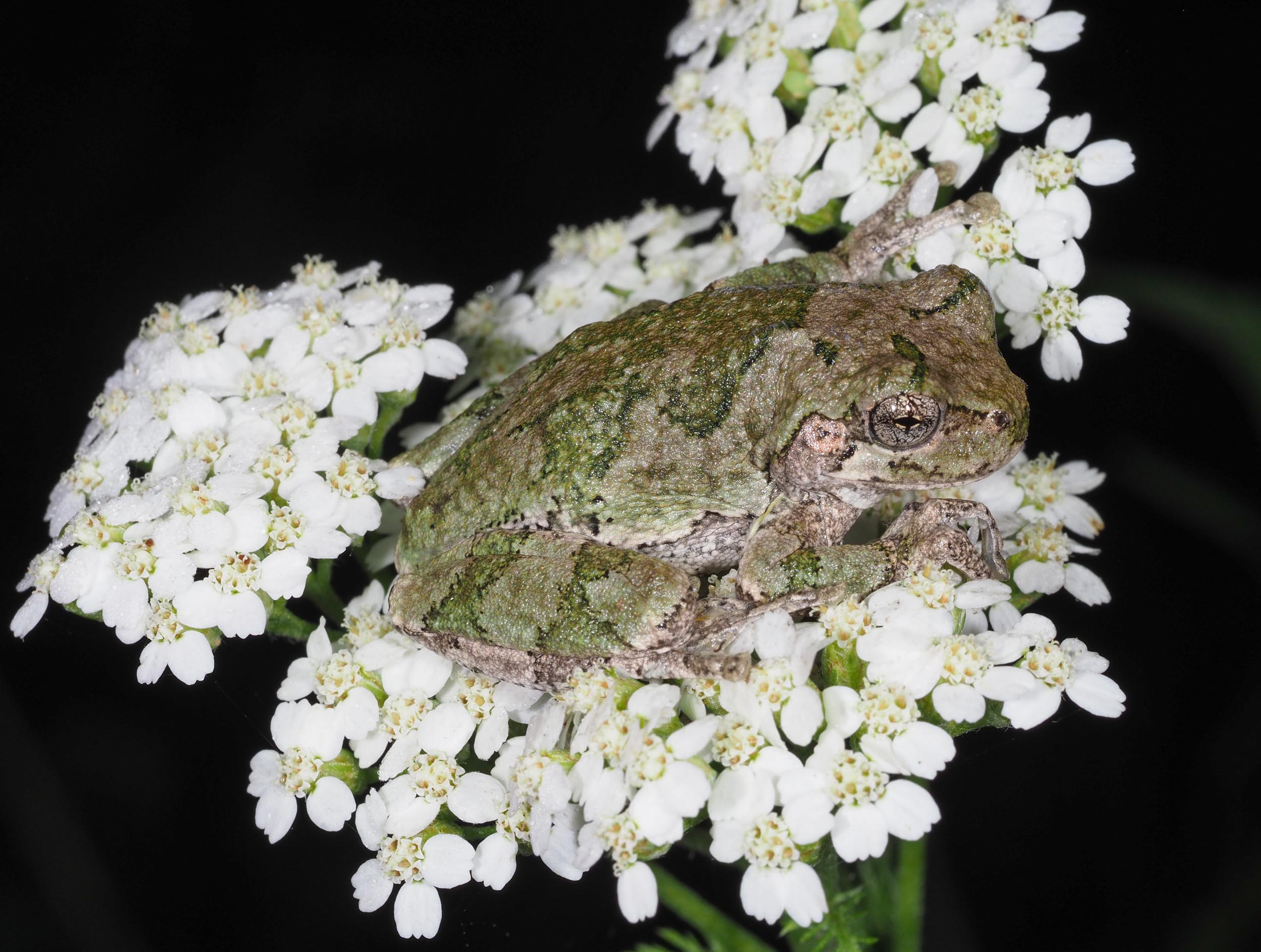 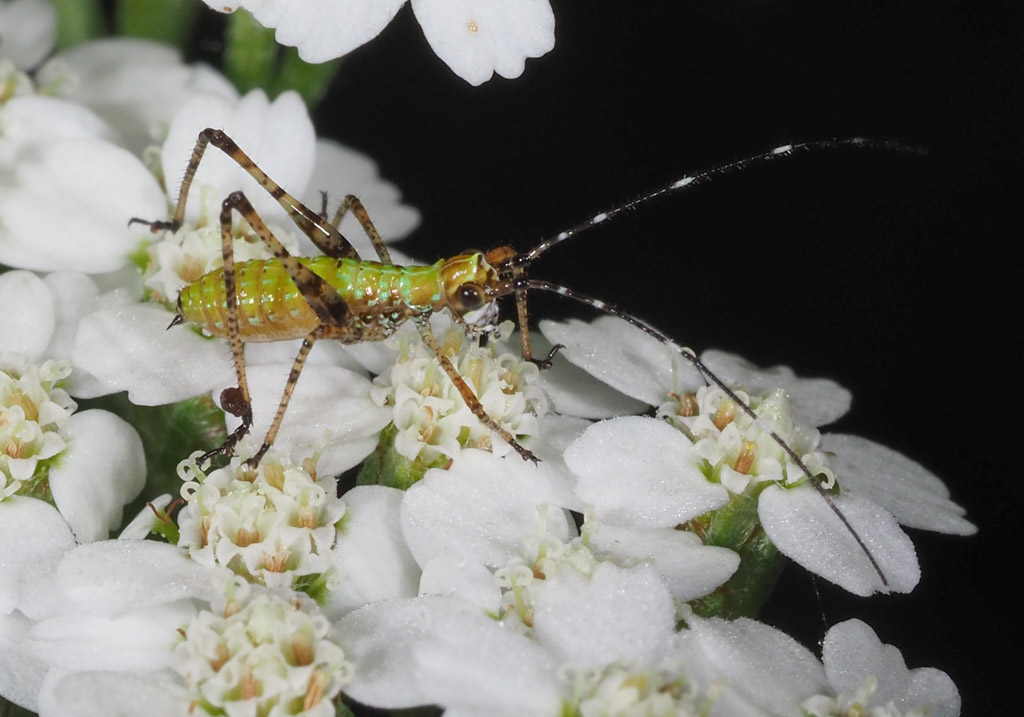 A raccoon found its way up onto our solar panels one evening.  It looked a bit surprised at where it had gotten to, and had trouble figuring out how to get down.  Eventually, after several tries, it went back down the way it came.  (The photo is fuzzy because it was nearly dark.) 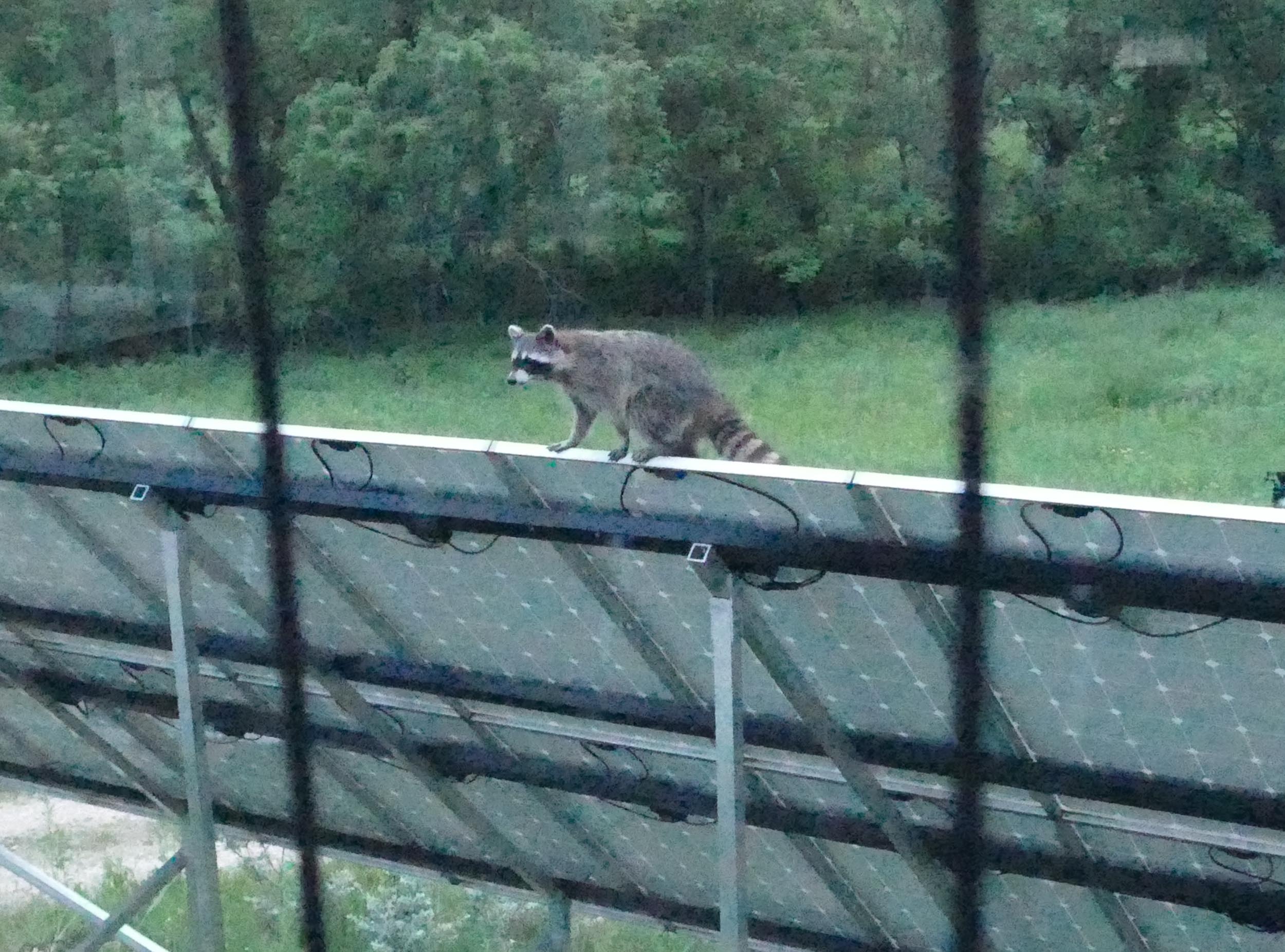 The woods are especially beautiful on these hot days.  This is a spot with Ostrich Fern and many Black Walnut trees. 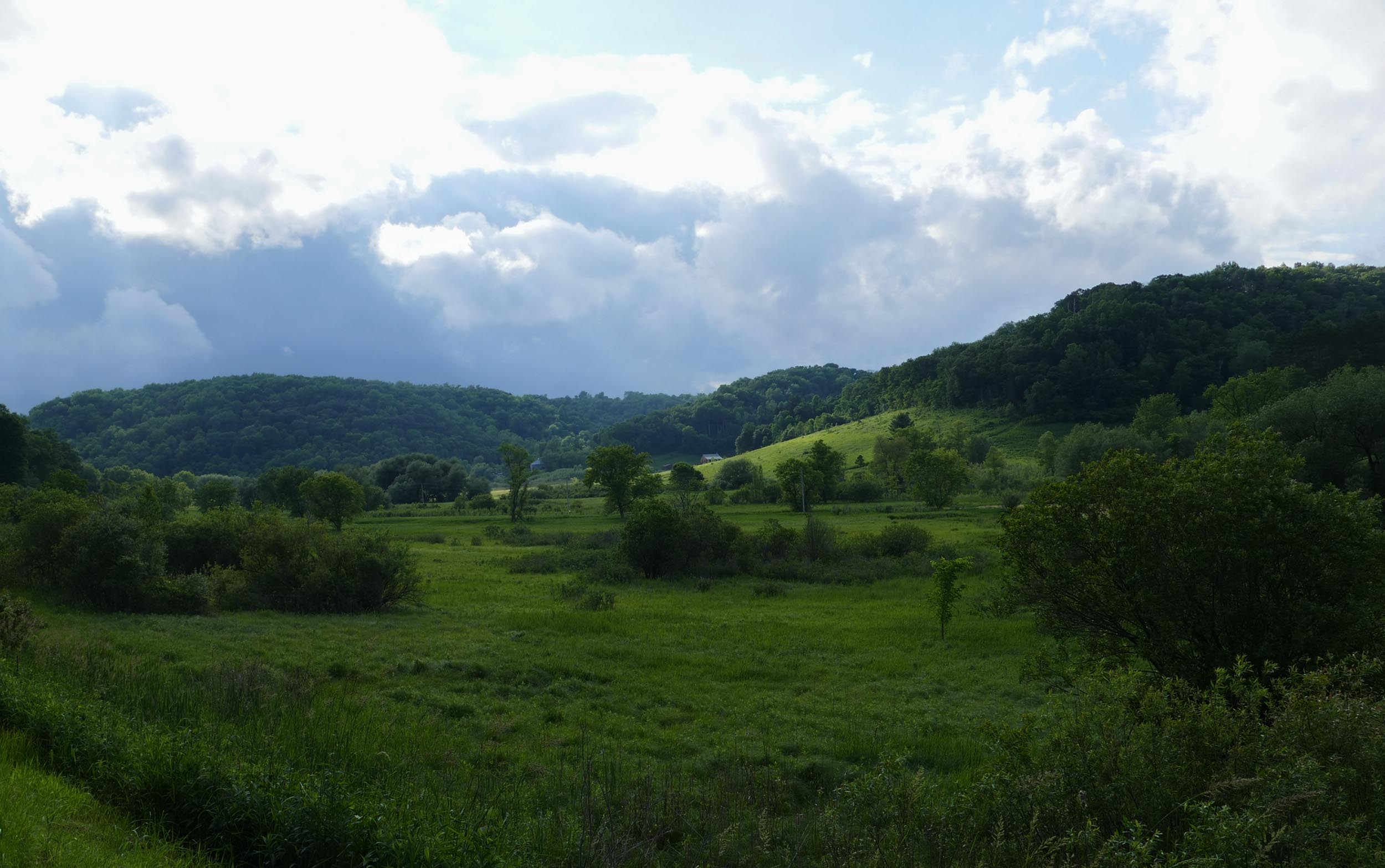 Mist over the valley – Mike took this photo as he was driving out early one morning. 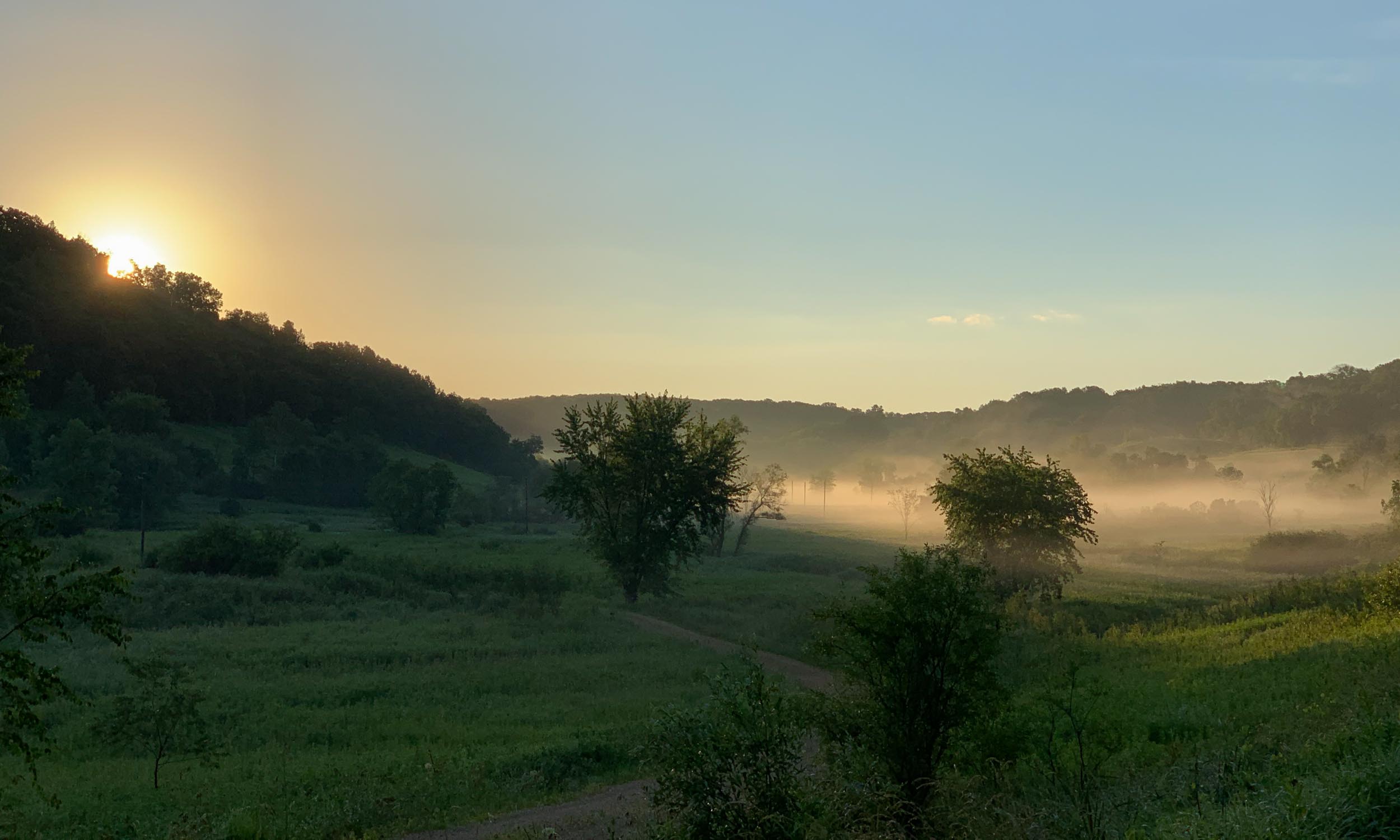