It’s hot – our thermometer reads 93.6 degrees right now.  I’ve been pulling out Wild Parsnip early every morning – by about 10:00 I’m dripping wet, and it’s too hot to do any more.  But there are lots of moths, and it’s nice to be outside at night, so I’m staying up late to watch them.

There’s less Wild Parsnip this year in all the places where I’ve pulled or mowed it for the last 3 or 4 years.  It’s encouraging to know that my work does make a difference!  Here’s a photo of one of the areas I’ve been working – to show how much better it’s gotten.  The area in the foreground and right side of the photo has been cleared of parsnip – I pulled it – for at least 4 years.  There’s still parsnip, but the plants are scattered.   At the back left is an area where I ran out of time one year, so I left all the plants and they set seed.  The stand of parsnip is much thicker there.

Mike has been gone this week, so I spent a few days seeing friends.  Several of us visited an outdoor pizza place near Alma – beautiful weather, and a great time. 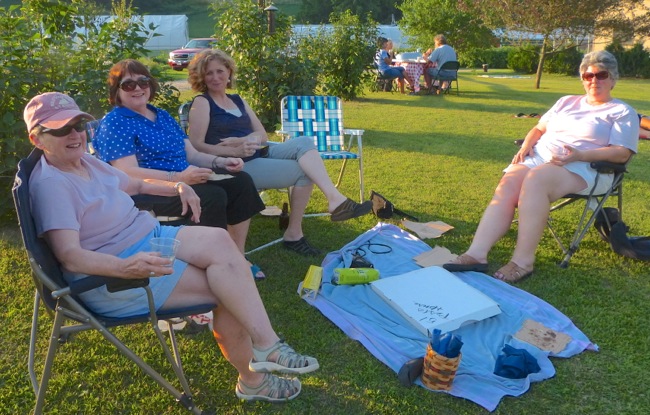 We met Gary and Ruth Ann there – they live just down the road. 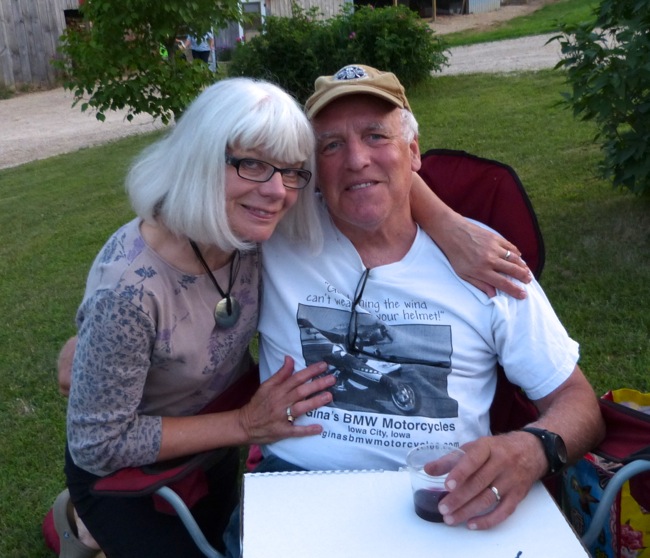 I visited MJ at her farm in Northeastern Iowa.  She has several big, planted prairies, and lots of woods that are being restored to savanna. Here I am, with Pale Purple Coneflowers, in the middle of one of her beautiful prairies. 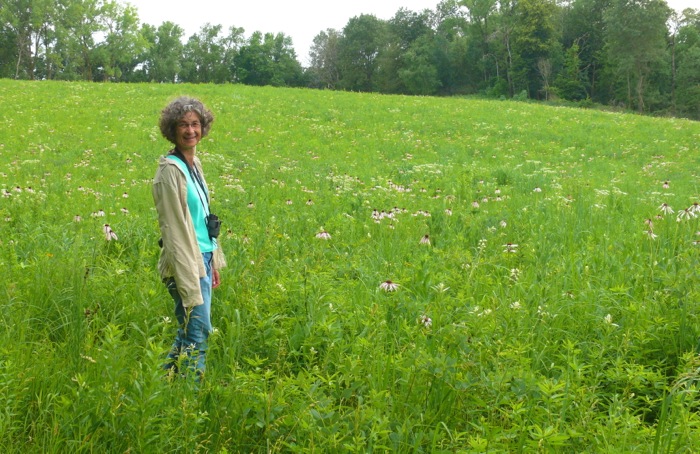 We set up lights that night, behind her house, and attracted lots of moths and other creatures.  The most spectacular creature of the night was an Imperial Moth – with a wingspan of about 5 inches.  (To see more photos I took at her place click here.) 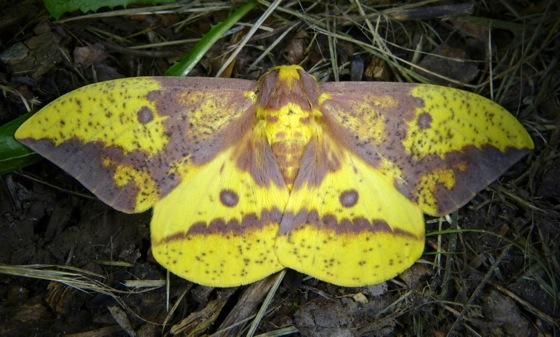 Here are some flowers and butterflies from our farm. 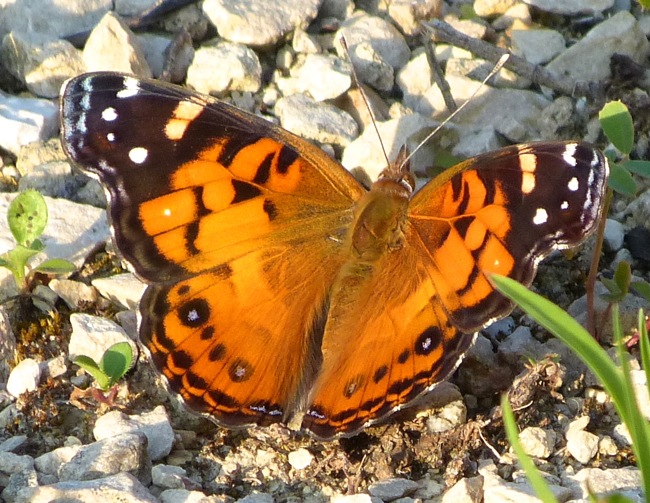 Black-eyed Susan – I like the extra red decorations on this one. 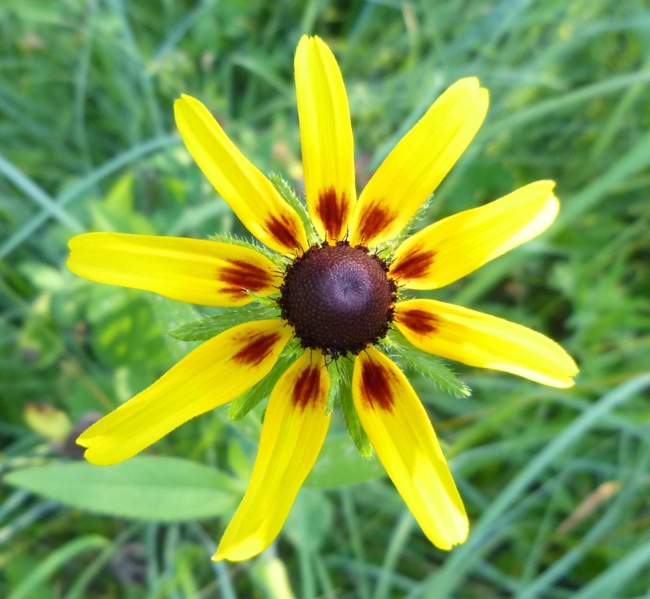 Butterfly weed really is a good butterfly flower.  It’s a milkweed, so Monarch caterpillars and many other creatures eat the leaves.  And the flowers are attractive to many different kinds of butterflies.  I usually find at least one butterfly on each plant.  This is a Banded Hairstreak. 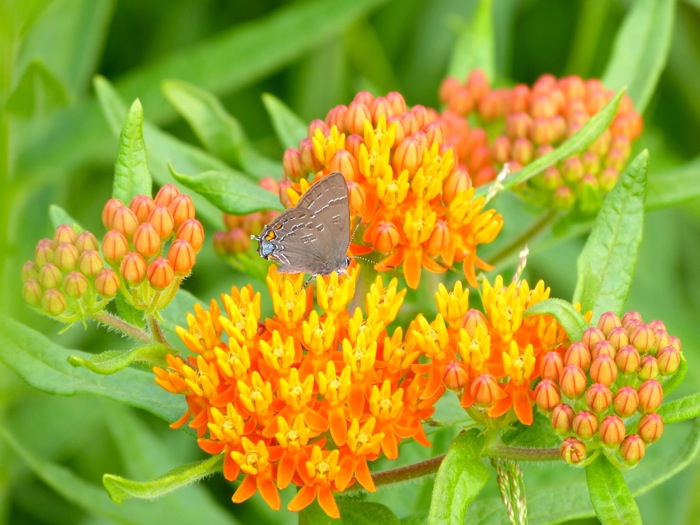 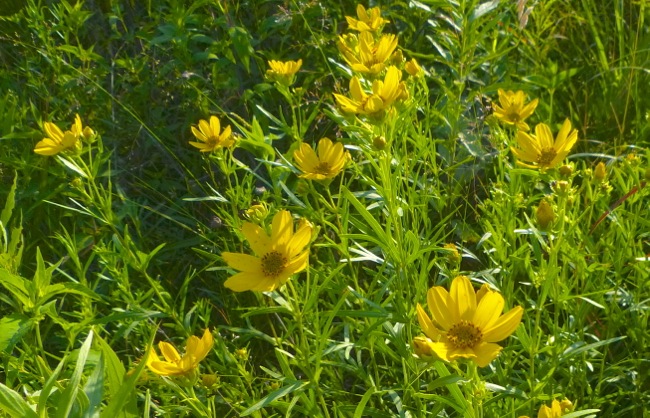 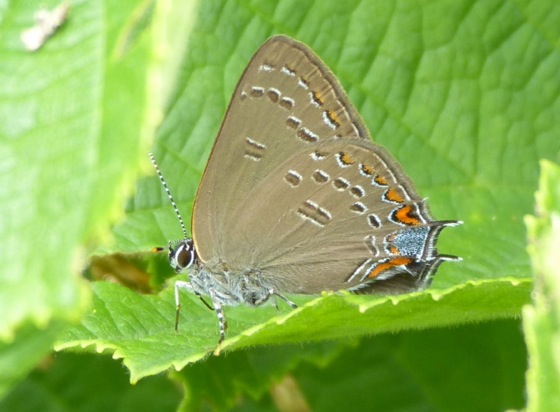 Bronze Copper – I don’t see these very often, and this is the first photo I’ve gotten. 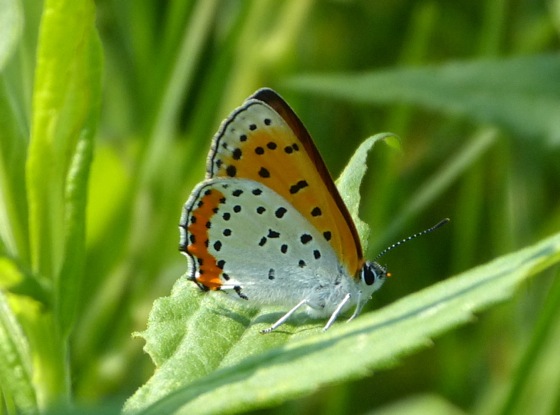 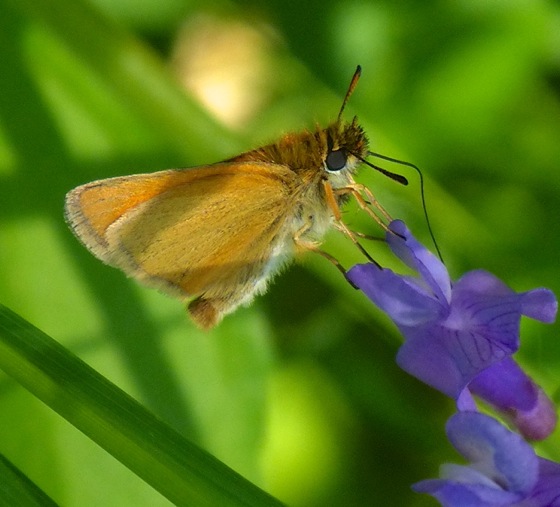 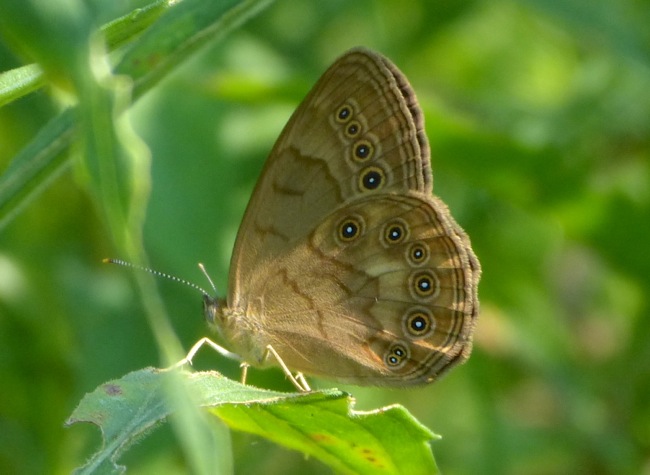 Several years ago I got some seeds of Prairie Larkspur from some friends down the road.  I tossed them into a few of our dry remnants, and this year, for the first time, I found some blooming. 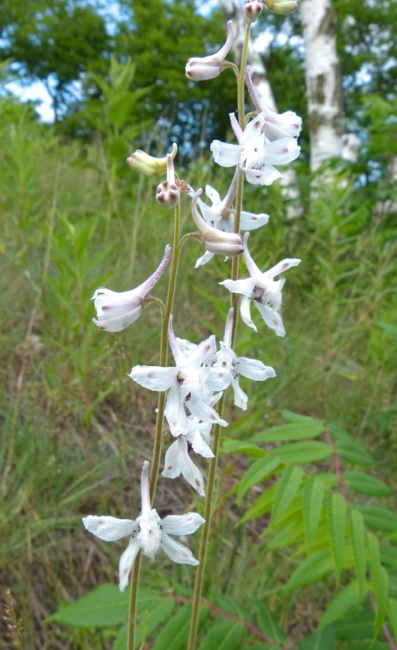 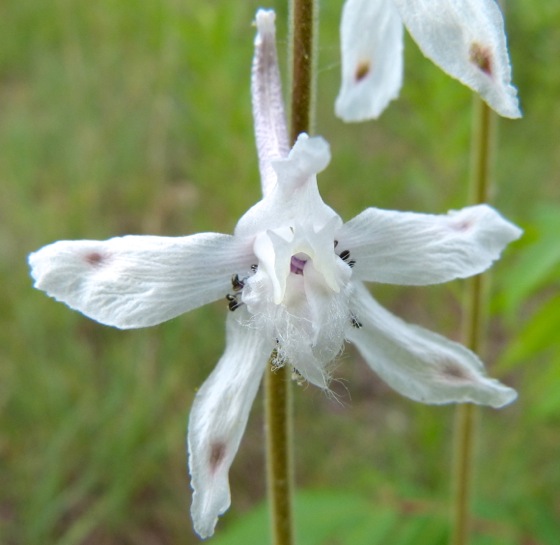 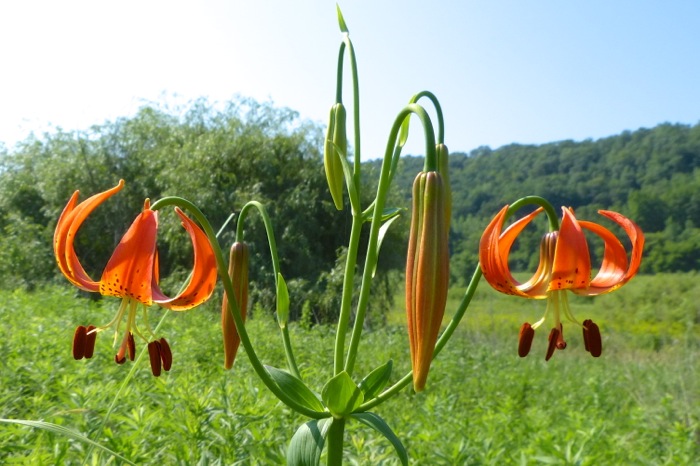 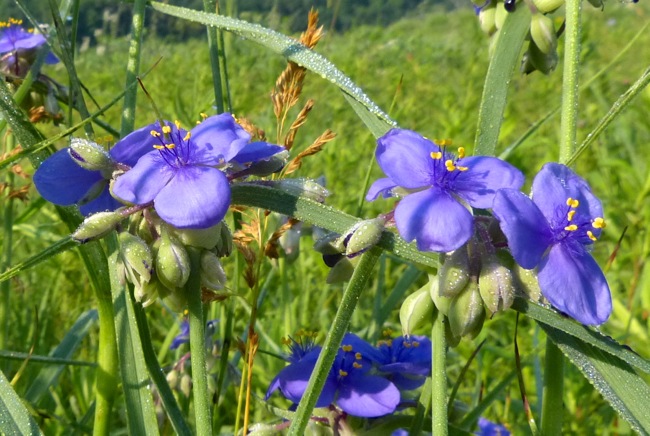 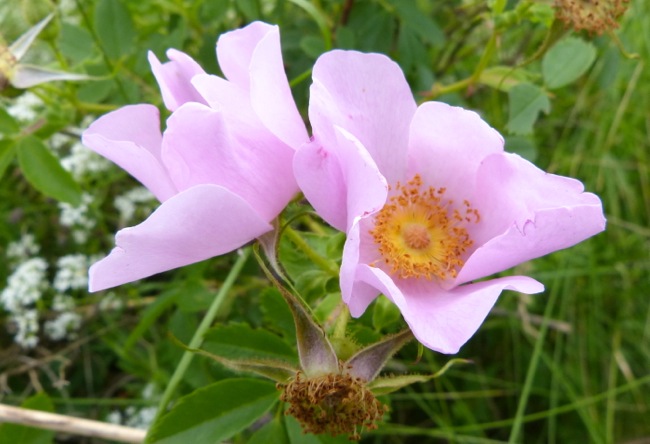 We’ve seen bears on the wildlife cameras a few times recently.  We can’t tell if it’s the same bear, or several different ones.  This one was up above the house one morning, just before we took our morning walk. 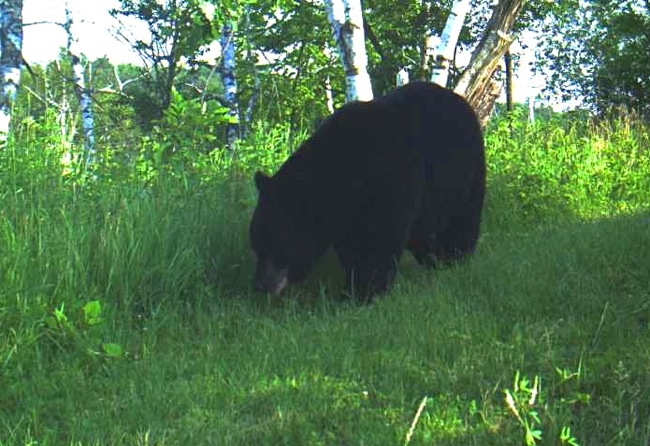 This is a young baby rabbit.  We don’t see rabbits often – I think there are so many predators that they don’t last long. 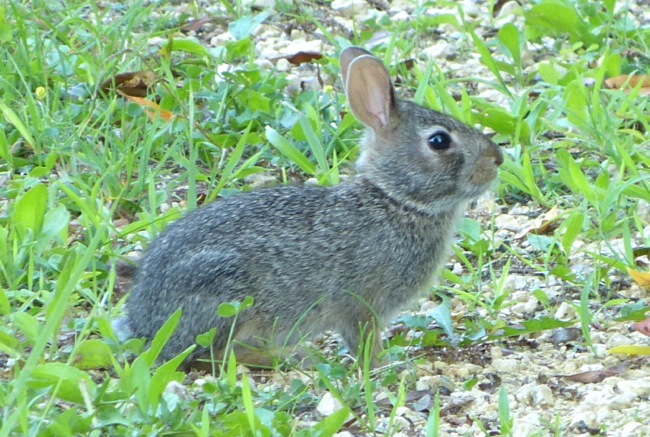 These raccoons have been hanging around for the last week or so.  They don’t seem to have a parent – they’re on their own.    They’re quite small – smaller than our cats – and they still have their fuzzy baby fur. 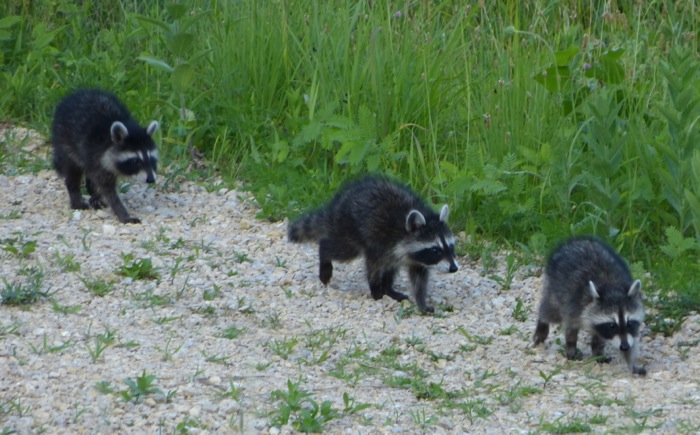 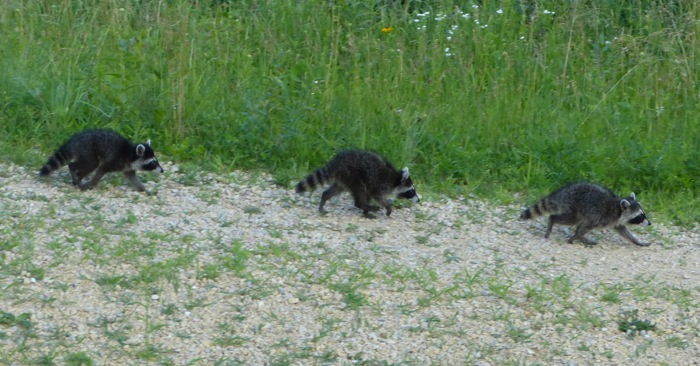 And now for the moths.  Mothing has been great – it’s nice and warm and humid.  Here’s what my sheet looked like a few nights ago.  Lots of moths, and other things too.  Most of the smaller insects are caddisflies, hoppers, and various kinds of flies.

Here are a few of my favorite moths from the last week. 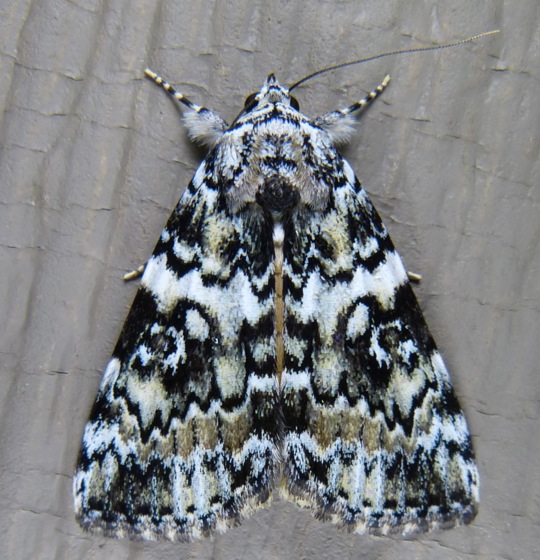 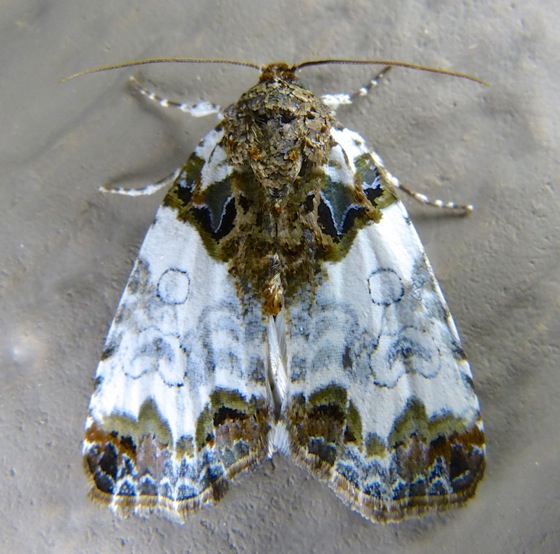 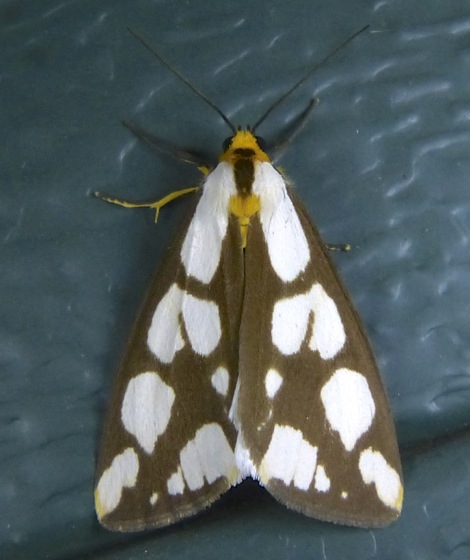 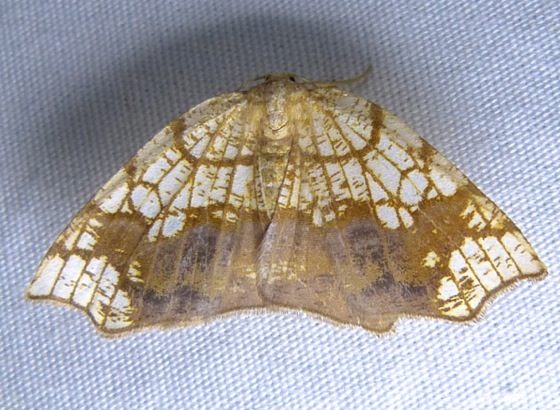 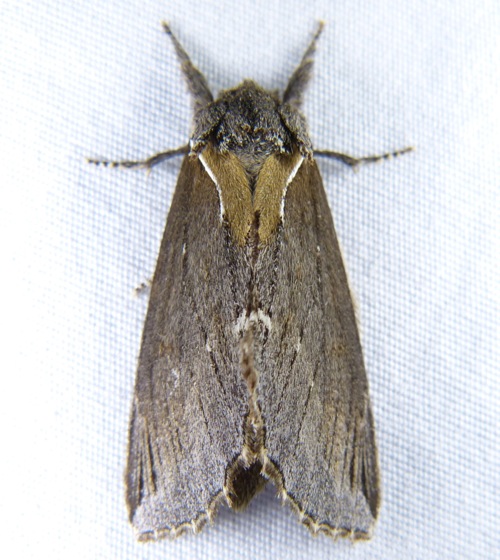 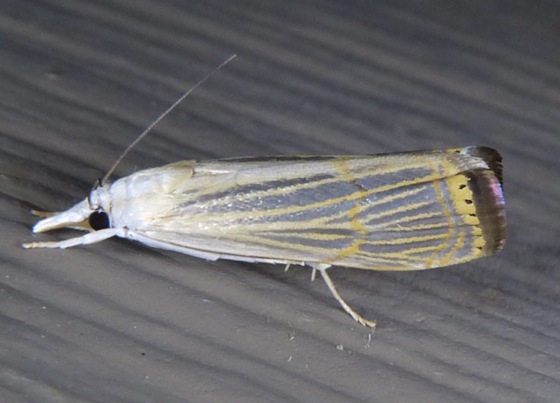 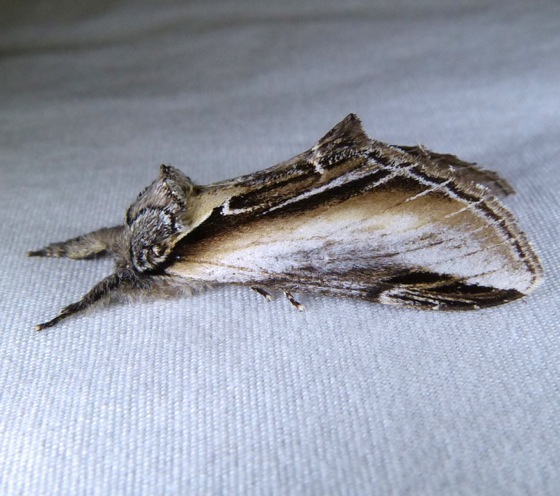 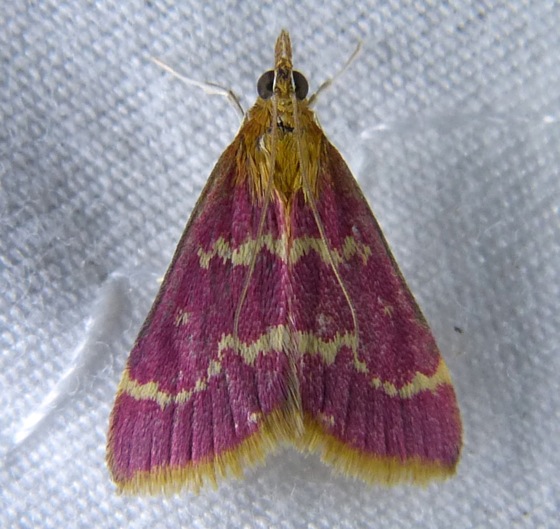 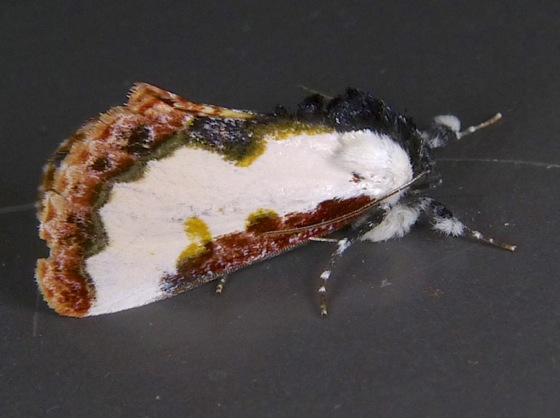