We’ve had almost a month of wonderful late summer weather – not too hot, cool at night, and just enough rain.  Now we’re getting ready for a few hot days.

I finished pulling Wild Parsnip – I was able to do a much larger area than last year, because the places I’ve been working on for several years didn’t have nearly as much to pull.  (Very encouraging!)  This is the part of the wetland where I’ve been pulling the parsnip since about 2006. 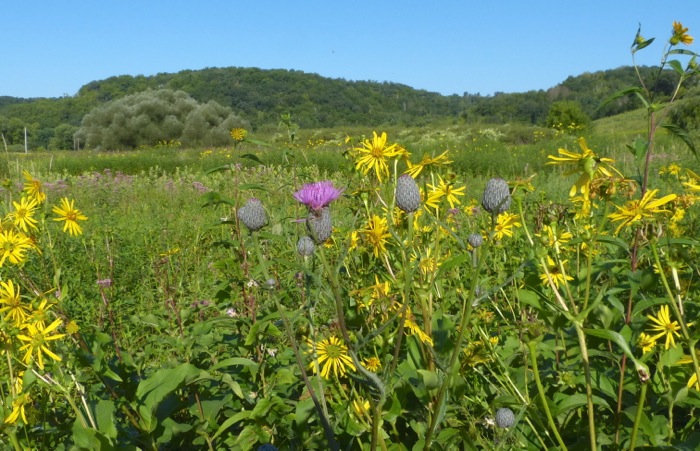 We’ve been seeing some interesting animals on the wildlife cameras in the last few weeks.  The biggest were the bears – at least 3 individuals.  This is the largest one. 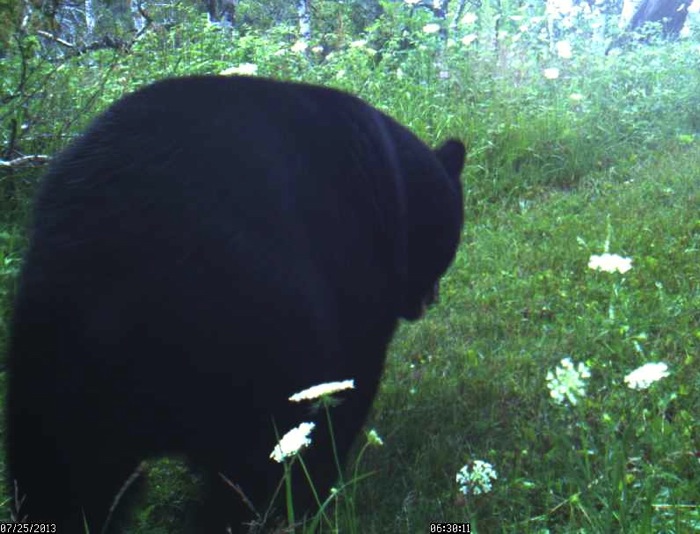 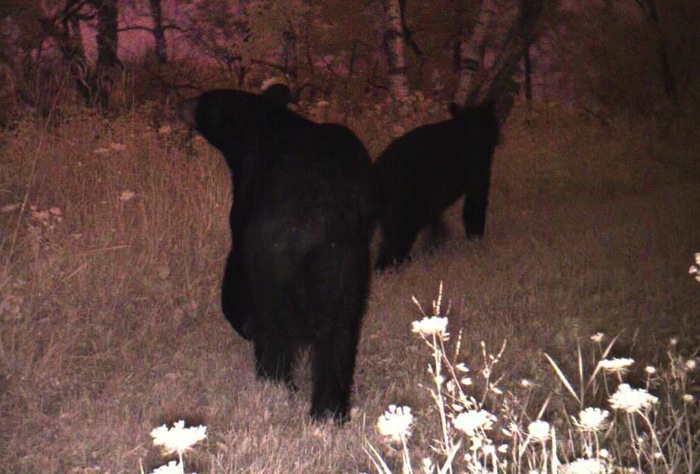 And one afternoon a bobcat wandered up the driveway.

We did celebrate National Moth Week with a moth party, but that night was cold and rainy and windy, so not many people came, and we only saw a few moths.    To see the moths that did show up, Click HERE.

Last week our  friends Catherine and Steve came to visit.  Here they are on the bench at Big View Prairie. 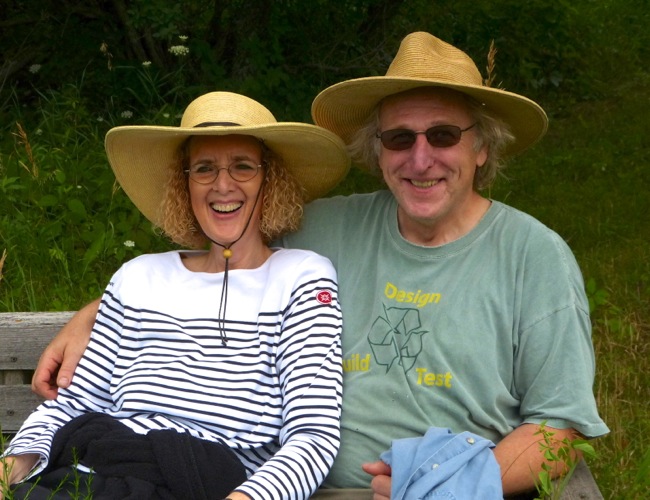 Catherine and Mike taking photos with their phones – of the Cat’s Paw Prairie.

To see more photos from their visit, and photos of all the moths we saw that night, click HERE.

This is a Rosy Maple Moth – one I reared from some caterpillars that Ian gave me.  Rosy Maple Moths are small – only about 1 1/2 inches long – but they’re related to Giant Silk Moths like Cecropias and Lunas. 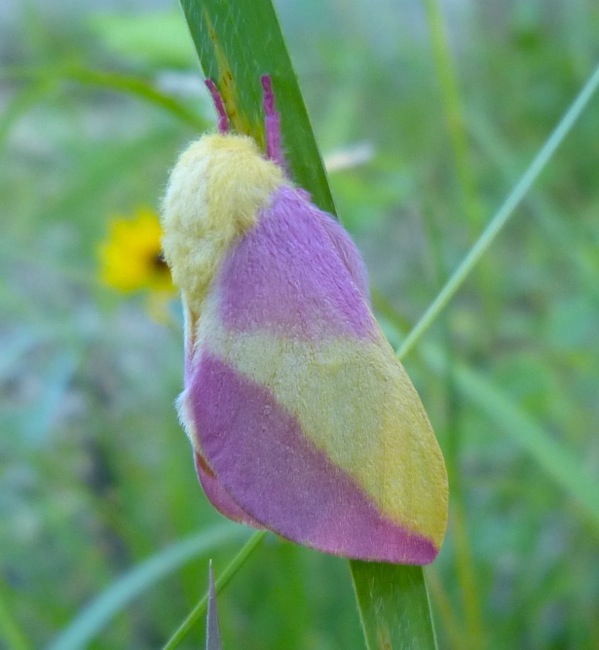 We’re starting to see Giant Swallowtails again – the second generation this summer.  The first ones fly up from the south, usually in May or June, and lay eggs on Prickly Ash.  This one probably came from one of those eggs.

A Monarch basking in the early morning sun in the wetland.   We haven’t seen many Monarchs this year – their population is lower than it’s ever been before.  ( Click here to see a report on the status of the Monarch population from MonarchWatch.org. )  I’ve been seeing more in the last few weeks – I hope that means that they’ve had a good breeding season, and their numbers will start to increase. 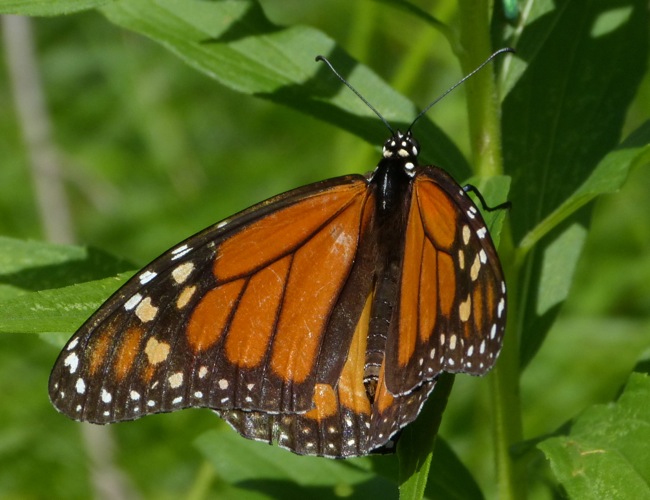 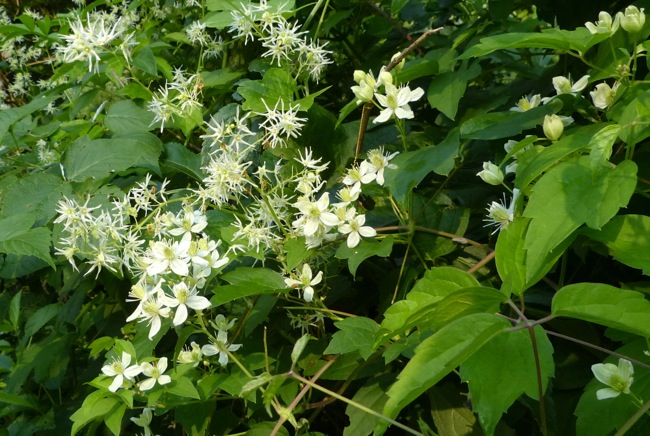 Prickly Ash is one of our most common shrubs.  It’s the host plant for Giant Swallowtails, and looks beautiful right now with it’s bright red and black berries.  And it has a very strong lemony smell.  But it tends to take over woods and prairie edges, so I spend a lot of time cutting it back.  I suspect we have so much of it because this land was heavily grazed for many years, and because of its sharp thorns, the cows probably didn’t like to eat it.

I’ve found several of these Blazing Star plants flowering in the Narrows Prairie.  It’s Prairie Blazing-star (Liatris pycnostachya) – not a species I intentionally planted.   I suspect the seeds were included by mistake with some of the other seeds I bought.  It’s a lovely plant, and native to this area – I’m delighted to have it. 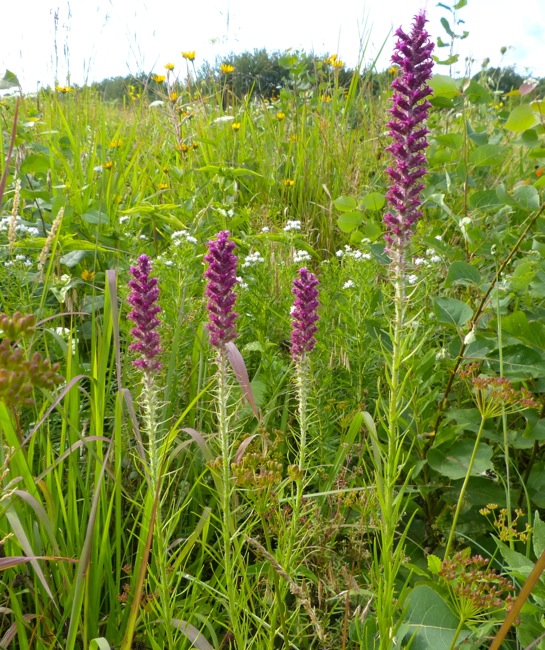 This is American Bellflower – one of the few really blue native flowers we have.  These were growing along the path above the cabin in the woods. 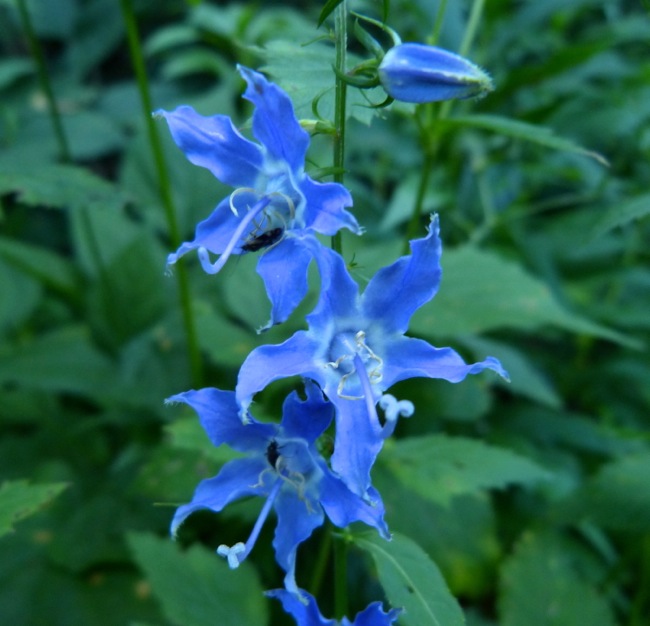 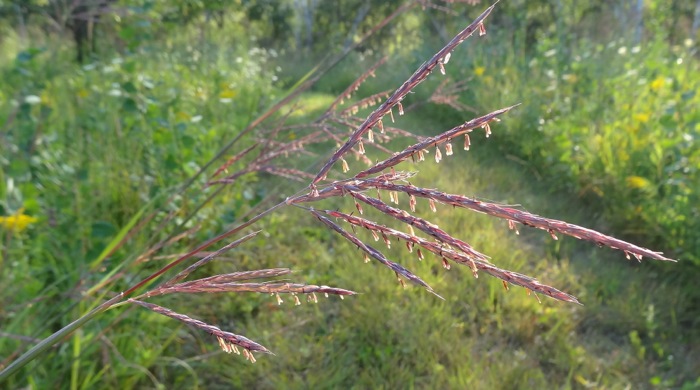 The sunflowers are doing very well this year.  I’m not sure of the species of this one – sunflowers hybridize easily, and are often difficult to identify to species. 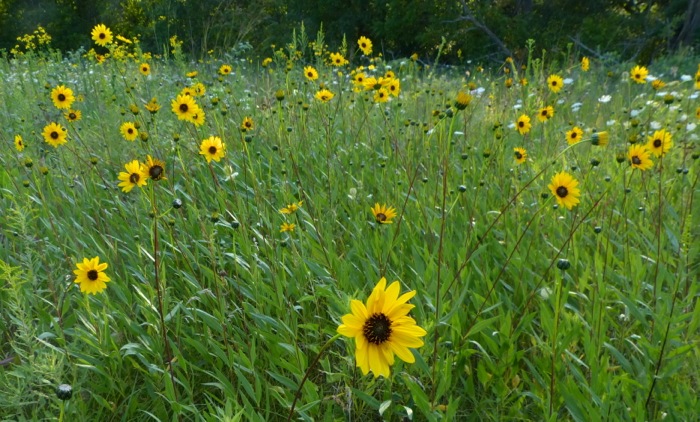 Our house in the middle of its prairies. 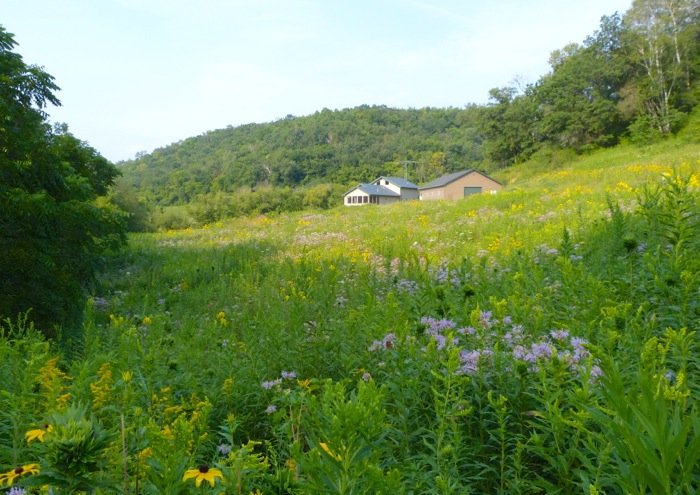 The Barn Swallows have finished nesting for this year.  They raised two families, one on one side of the porch, and one in a renovated Phoebe nest on the other side of the porch.  This was one of the last babies to leave – it was still there yesterday, but had finally fledged by the time we came back from our walk this morning.  We won’t be dive bombed any more when we walk out the door.

The cats look forward to mothing nights.  Tiger loves watching moths through the windows, but he’s even happier if a few of the moths follow me inside. 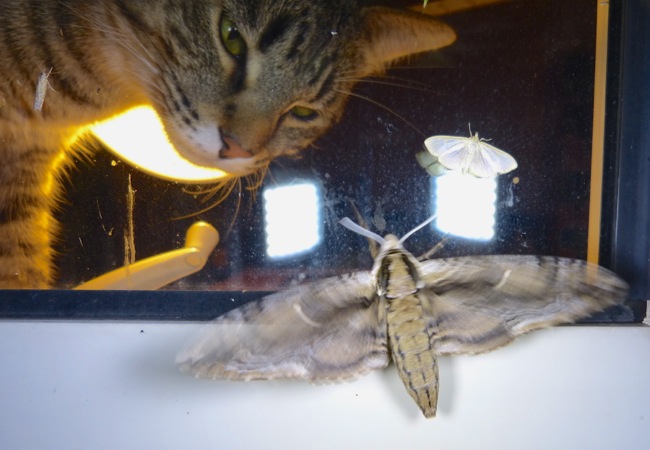 This is another of my companions on mothing nights.  A Gray Tree Frog. 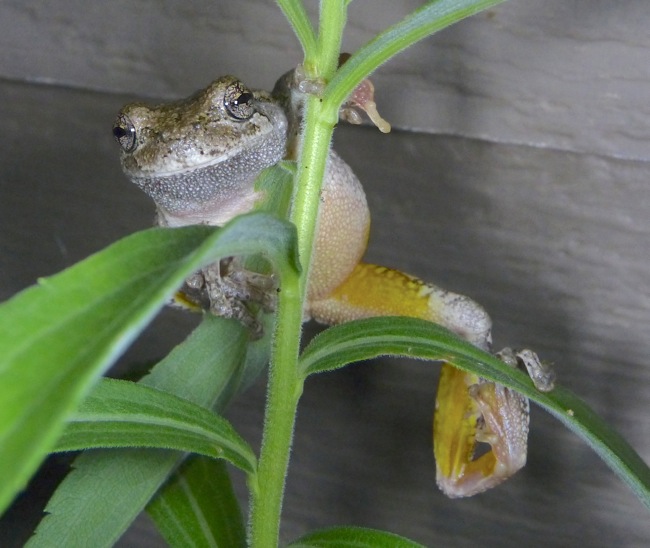 Here are of few of my favorite moths from the last few weeks. 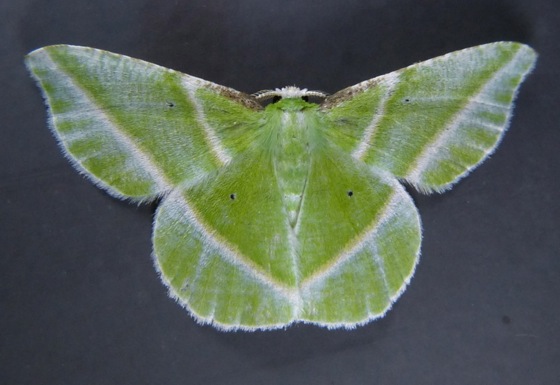 Variable Antepione – the color of this one varies by sex and by time of year.  This is a summer male.

This is the time of year to see Underwings – they have cryptic gray and brown upperwings, and often bright hindwings. 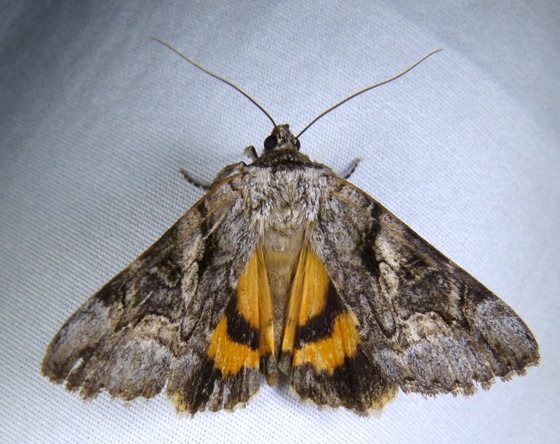 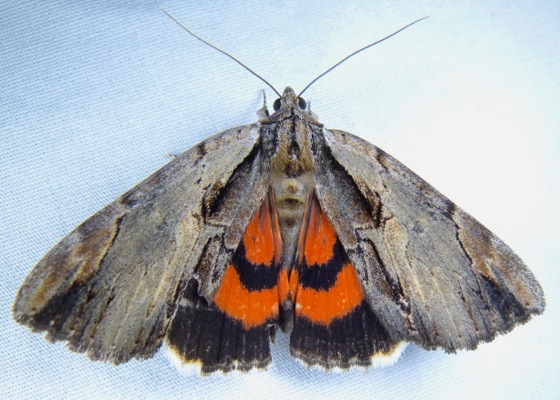 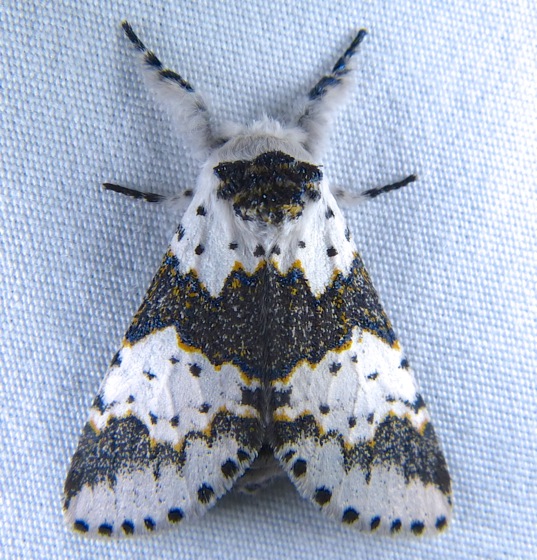 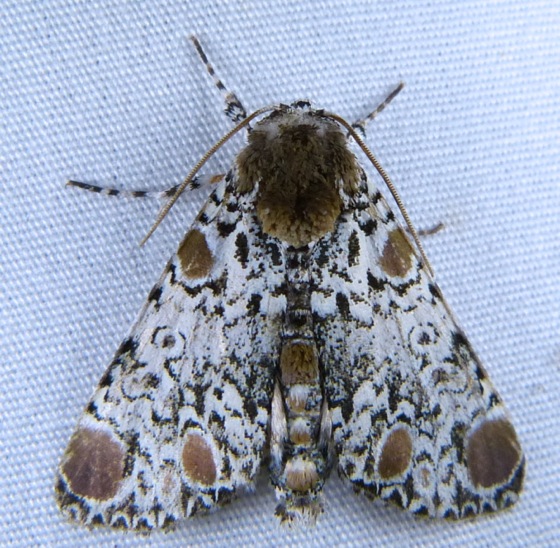 To see more of the moths I’m seeing now, Click Here.  I’ve been making a page of the current month’s moths.  It won’t be completely up to date, because I’m always adding to it.