I just realized that I haven’t done any regular blog posts – about the farm – for nearly 2 months!  I’ve been busy catching up on the South America photos, and doing holiday activities. Now I’m finally back into farm projects.

When we left for South America, at the beginning of December, we still had no snow.  This is Center Valley on November 28th – a few days before we left. 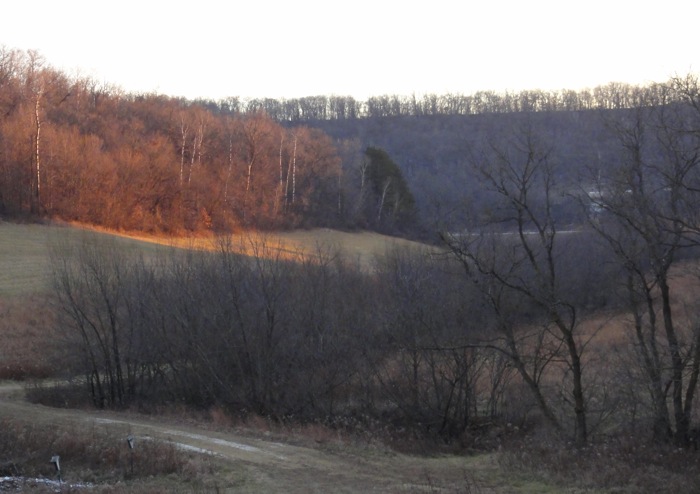 While we were gone we got 24 inches of snow – here’s Center Valley on December 26th. 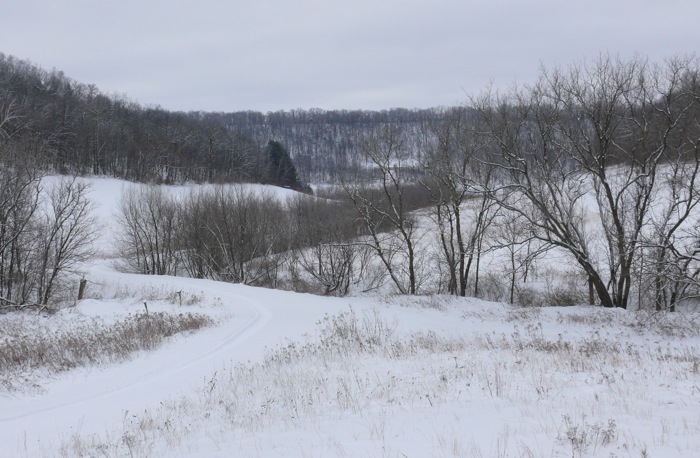 I had to shovel a lot of snow before I could fill the birdfeeders. 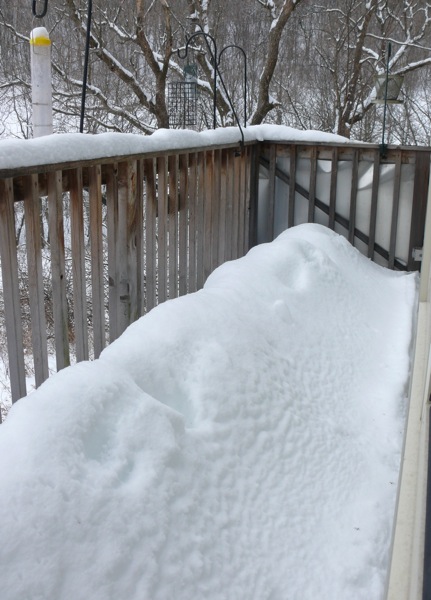 Mike came down by himself a few days before we came to stay, to plow the driveway so we could drive in.  He and a friend borrowed a snowmobile so they could get in to the snowblower – and the snowmoblile got stuck.  Mike finally did get it plowed – after many adventures, and finishing up in the dark because it took so long. 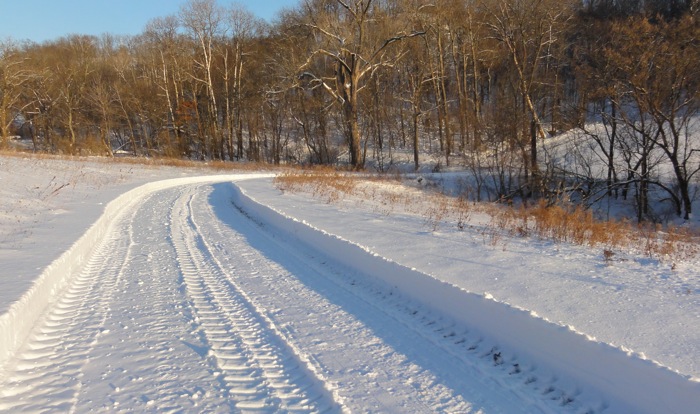 The powertrack was being fixed while we were gone.  It was returned just before the big snow, and parked outside next to the garage. 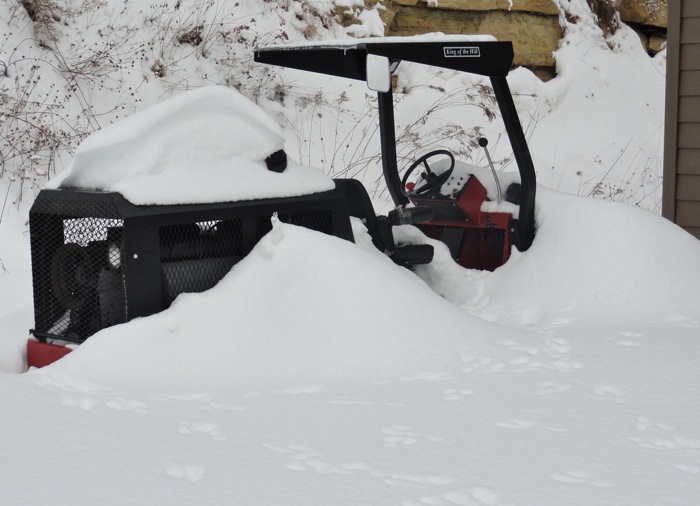 It was a big project to shovel it out.  Fortunately it started right up once Mike could get to it. 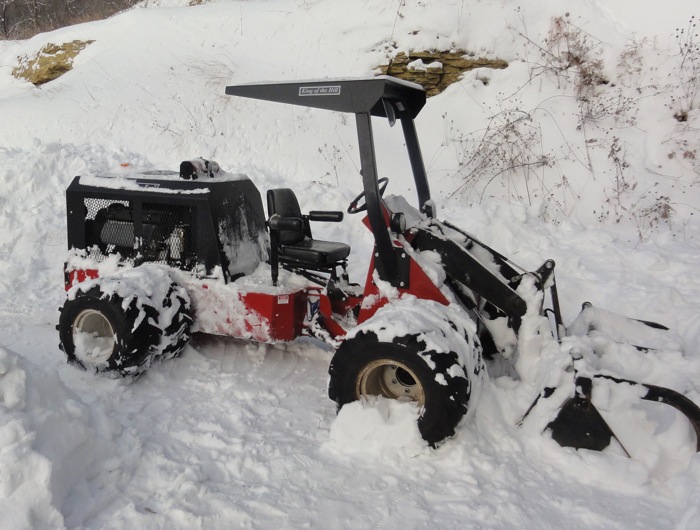 Since we got back we’ve been having small snowstorms every few days.  The snow has packed down a little now – better for snowshoeing – but it’s still at least a foot deep in most places.   I’ve been walking around – on snowshoes – seeing all the familiar places.  This is Buffalo Ridge Prairie. 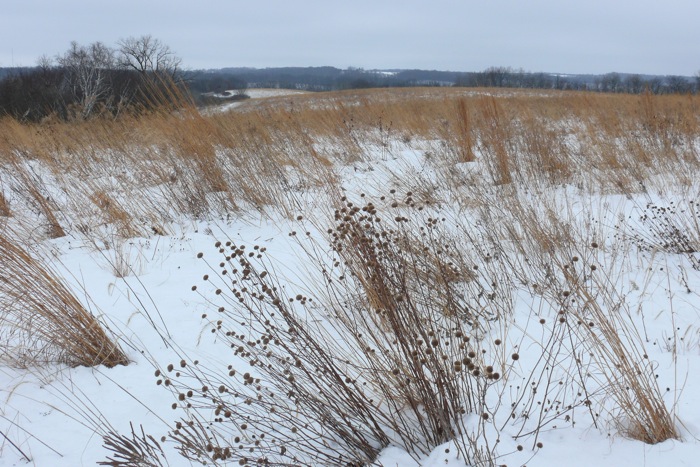 The spring near the cabin stays open all winter. 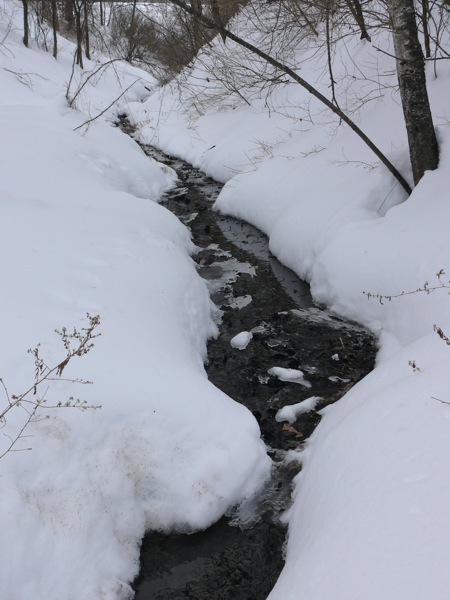 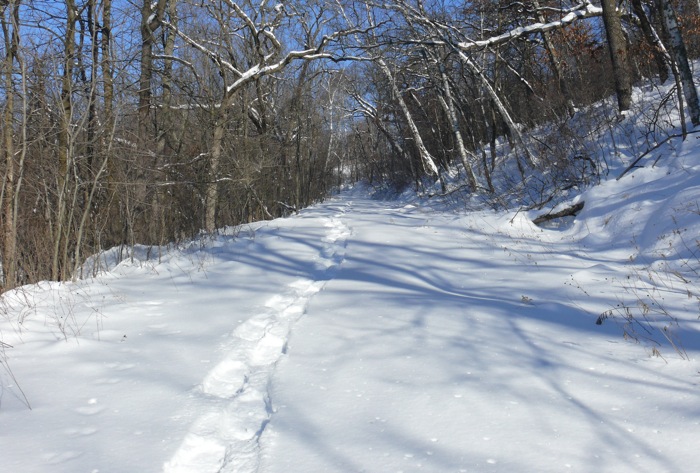 A deer that I disturbed – feeding under an oak on Indian Grass Point.  I think the deer are having a hard time – the snow is so deep that it’s difficult to walk, and it must be hard work to dig under all that snow to find plants to eat.  We see a lot of deer on south-facing hillsides – where the snow isn’t quite so deep. 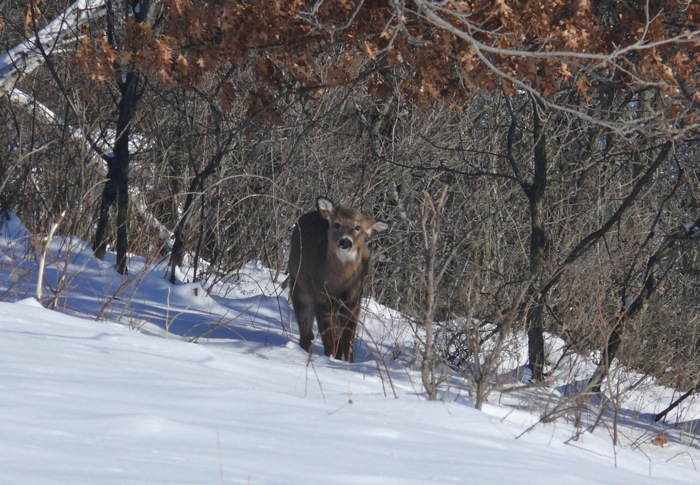 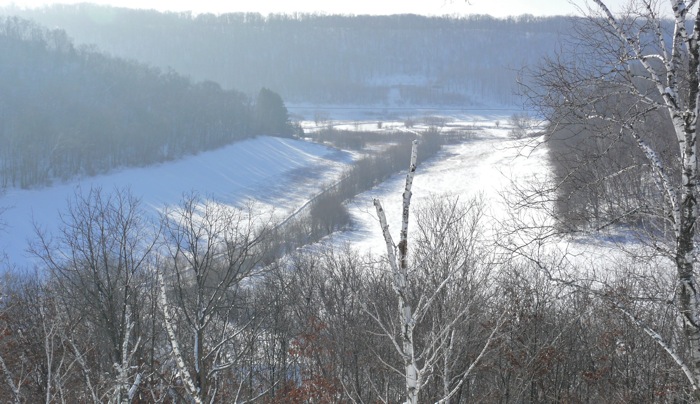 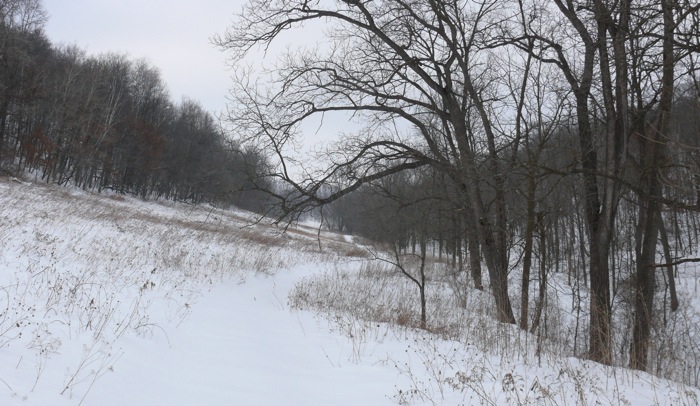 We have so many dead trees now that we have a huge population of woodpeckers.  A Pileated Woodpecker was making a hole in this tree, and left the ground covered with wood chips. 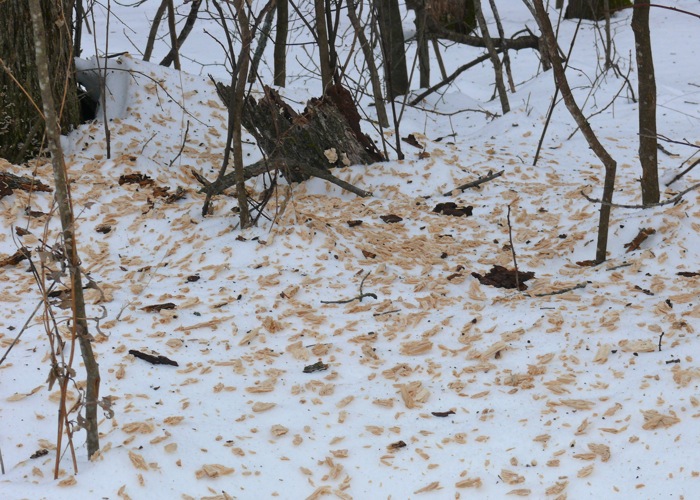 I think these are Turkey Tail fungi – on a dead birch. 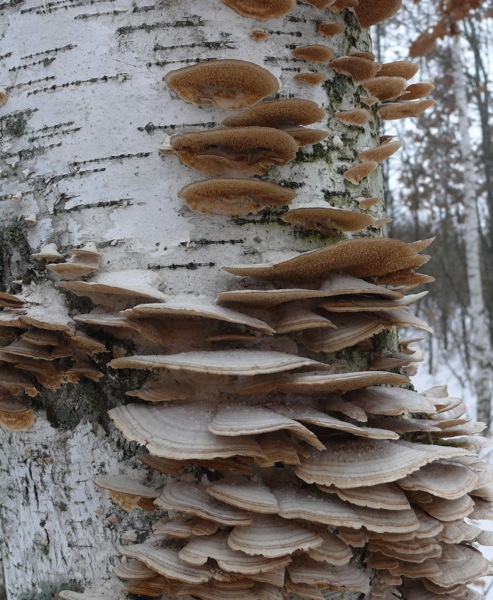 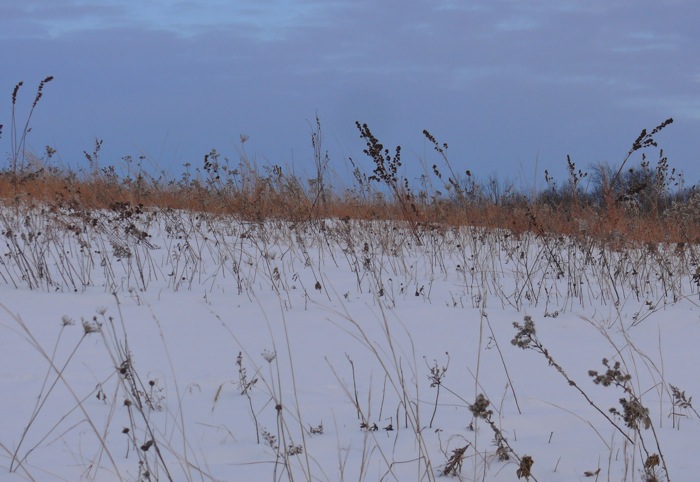 This is the time of year we can see over our hills to the north, towards Gilmanton.  The rest of the year this view is hidden by leaves. 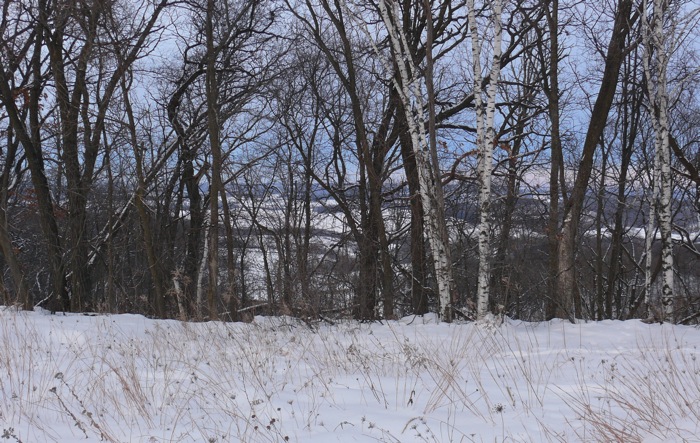 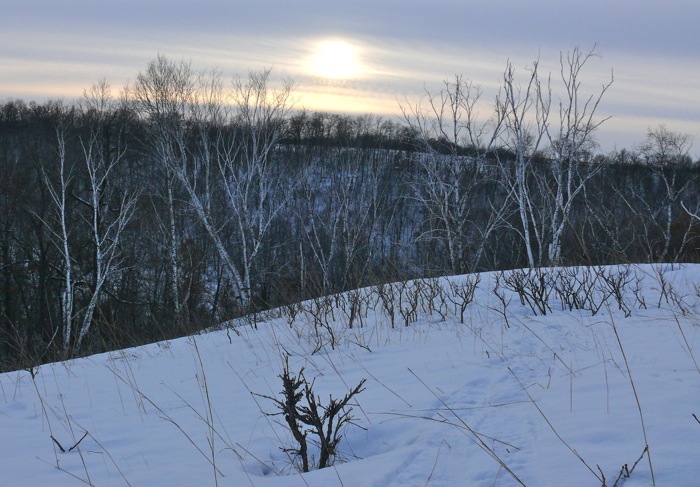 The Golden Eagle Count was last weekend.  Our friends Ann and Ellen came down to join our count group.  I was really hoping we could show them at least one Golden Eagle, but we didn’t see any!  We did see 15 Bald Eagles, 12 Red-tailed Hawks, a Northern Shrike, and an American Kestrel – and the drive was beautiful.  There was a gathering of count folks at our house afterwards – about 25 people came.  It was fun to compare notes and catch up with everyone.  Carol and Joe both saw Golden Eagles right down the road – ones that we missed – that we could have counted. Oh well – maybe next year.

Here’s Carol’s photo of the one she saw along Hwy 88 – taken with a long zoom out the car window. 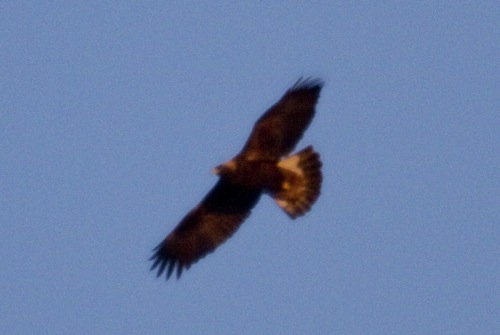 And a few goofy photos from the party 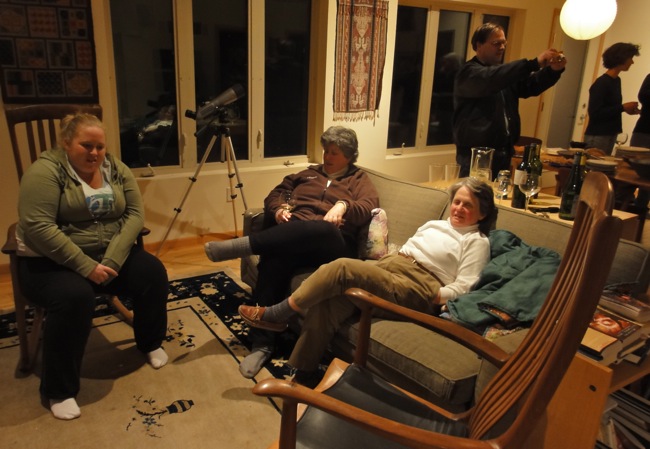 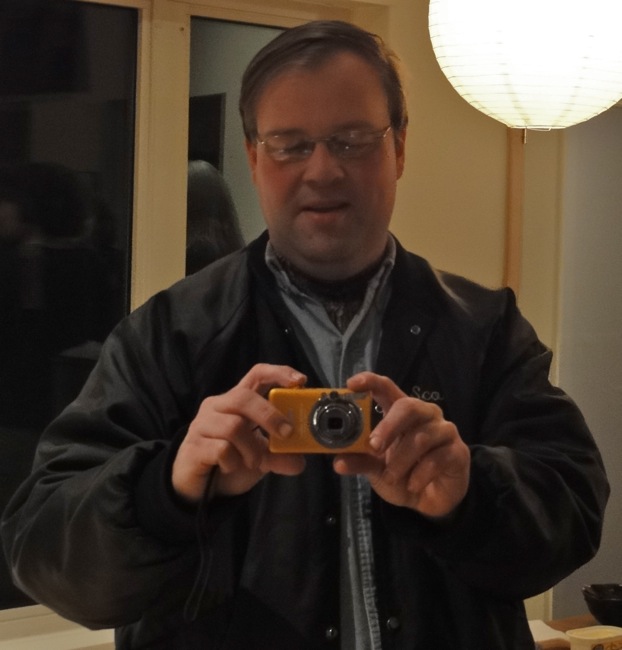 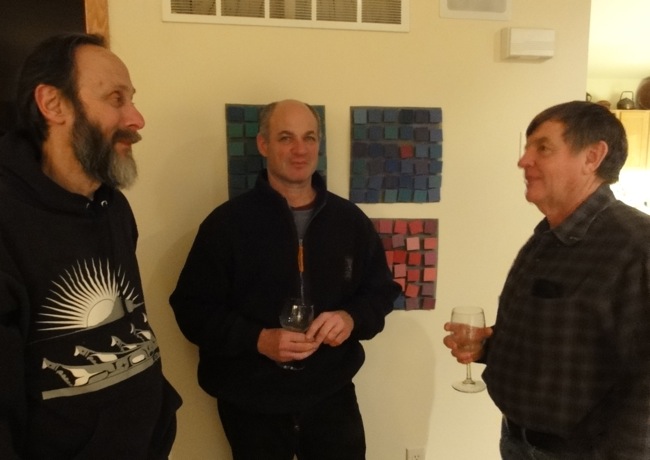 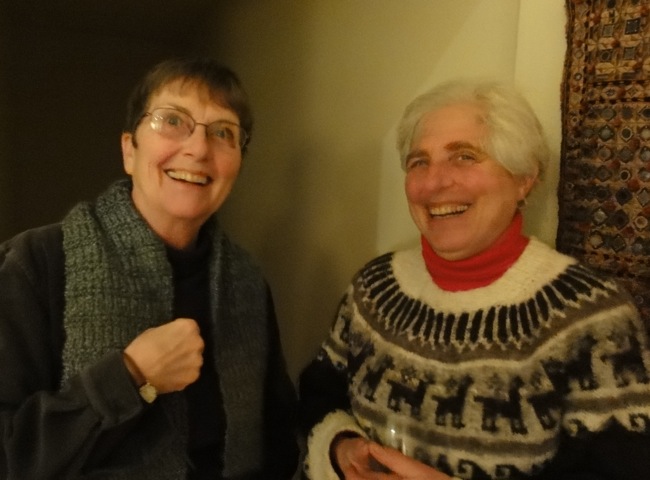 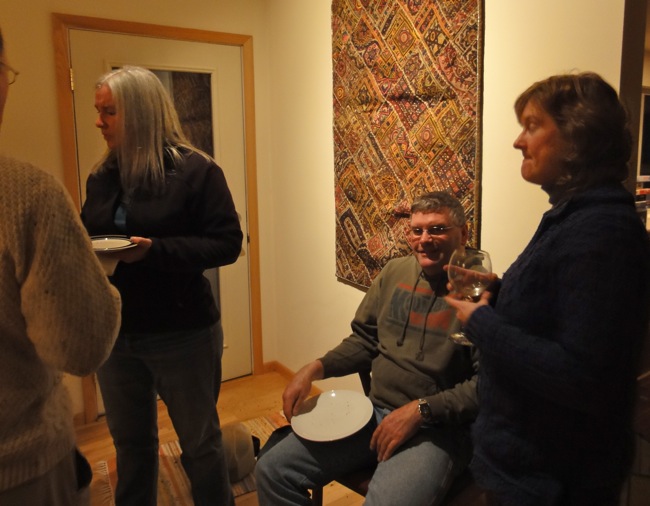 View of the wetland from Sumac Prairie 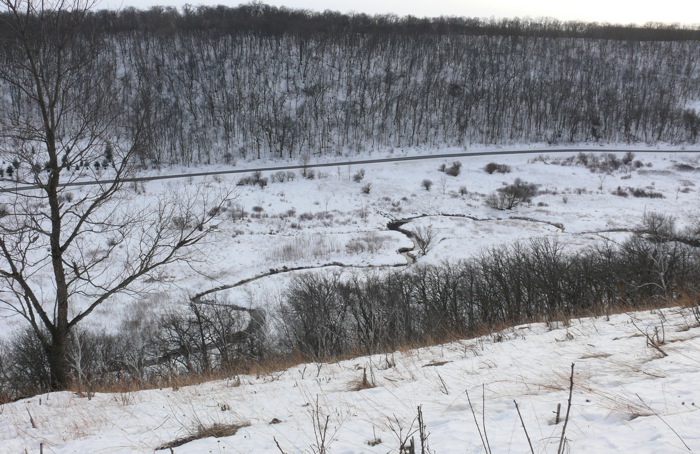 One of the parts of Sumac Prairie that we were working on last fall.  I love revisiting these areas – admiring our work, and dreaming about the prairie plants that might come up there this year. 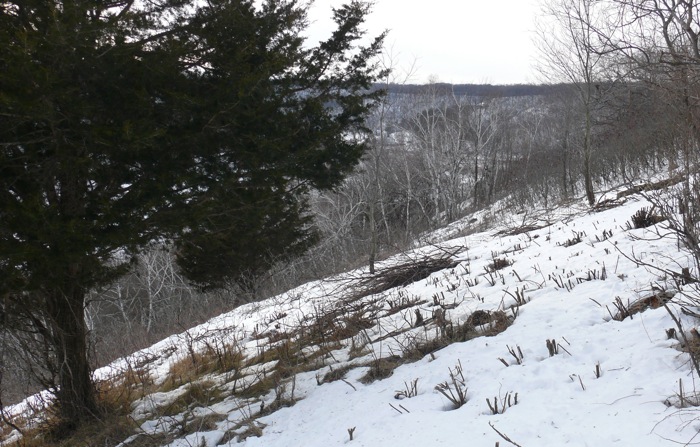 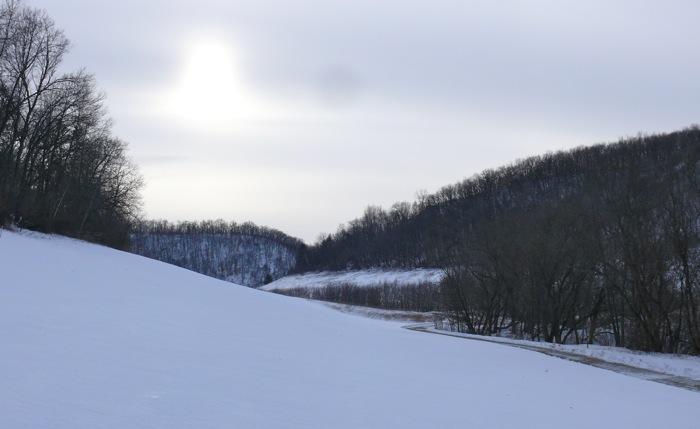 There are signs of spring – even this early in the year.  The days are definitely getting longer, and yesterday I found some willows blooming.  They were way up in the tree, and there weren’t many, but they were definitely blooming. 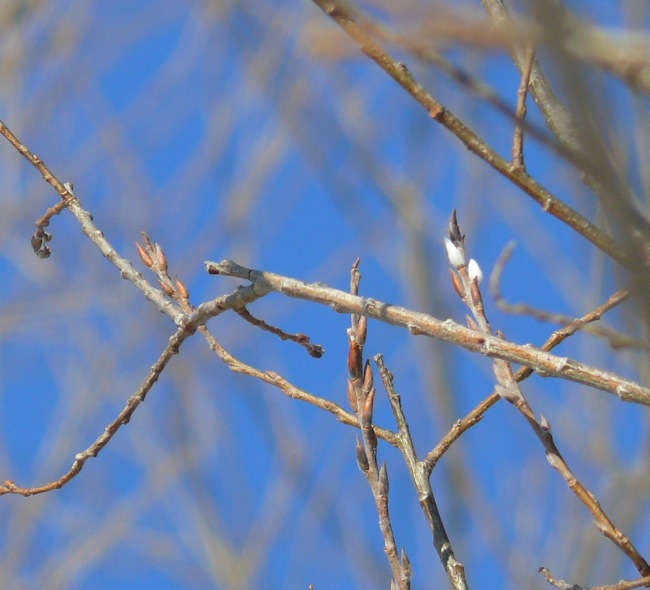 I pulled the branch down closer – just to be sure. 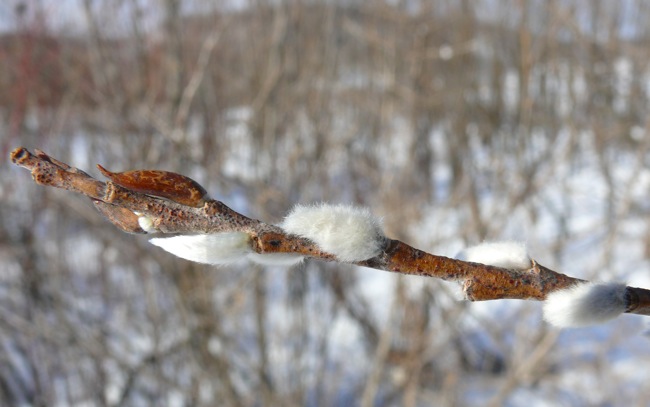 But the thermometer in our valley weather station stopped working at minus 20 (minus 29 C) last night.  The weather station on top only got down to minus 17, but it’s always warmer up there.   I guess it’s not spring yet.