Spring has come very slowly, but it’s finally here.  We had what we hope is our last snowstorm – about 15 inches. 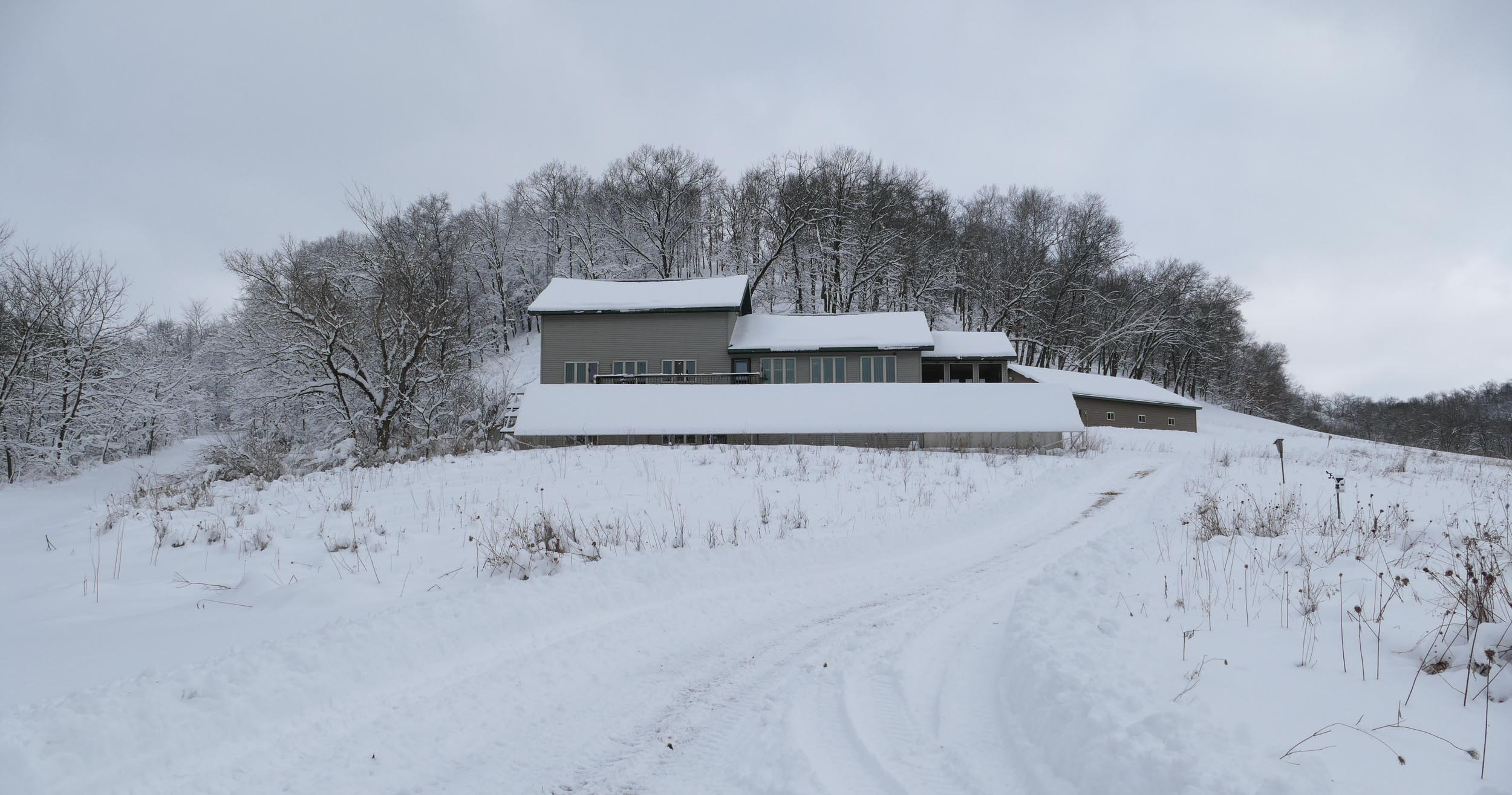 The wet snow stuck to the trees, especially in the path of the wind. 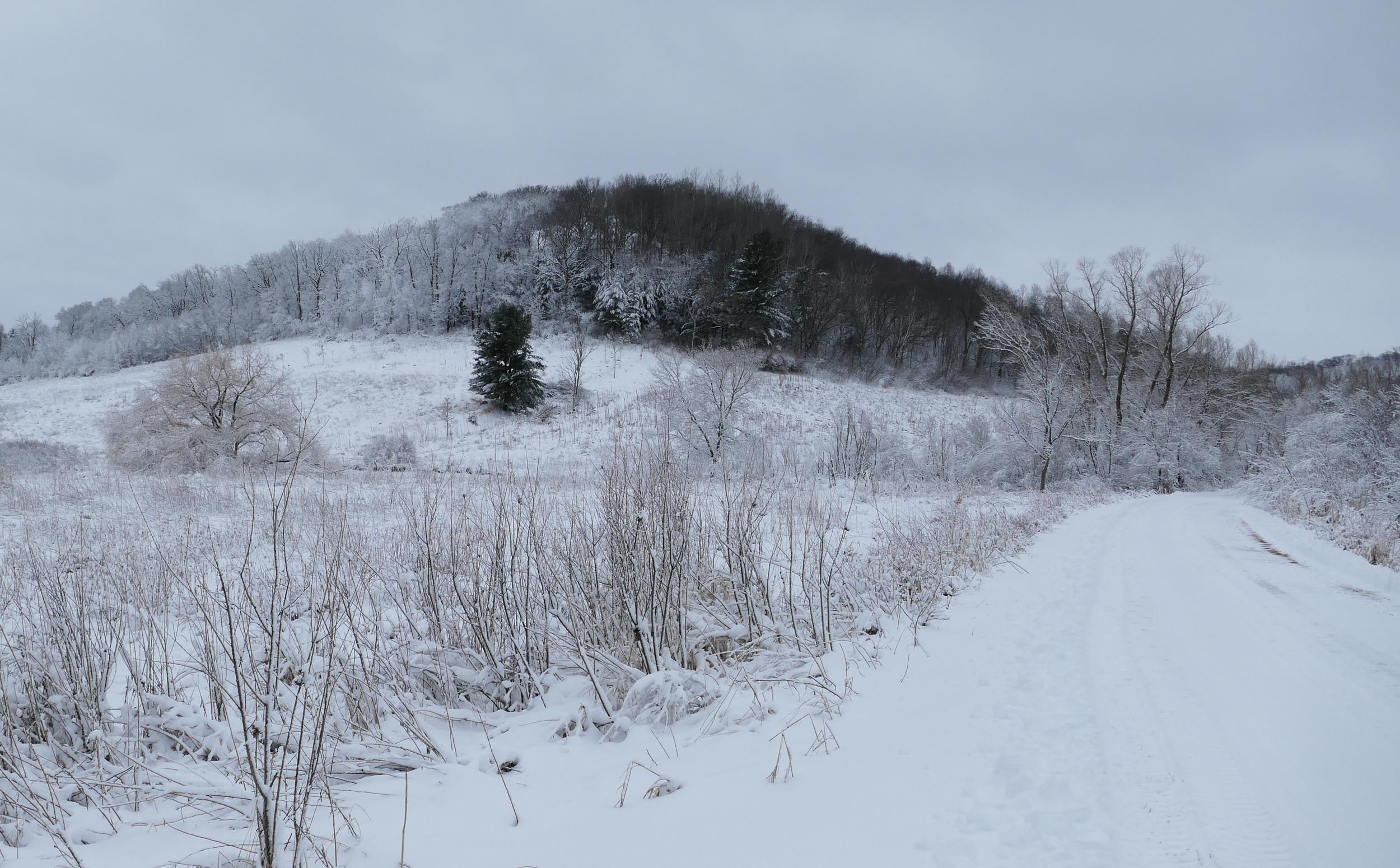 The birds were desperate for food – they lined up along the railing for sunflower seeds.

But the sun came out, and then everything started melting. 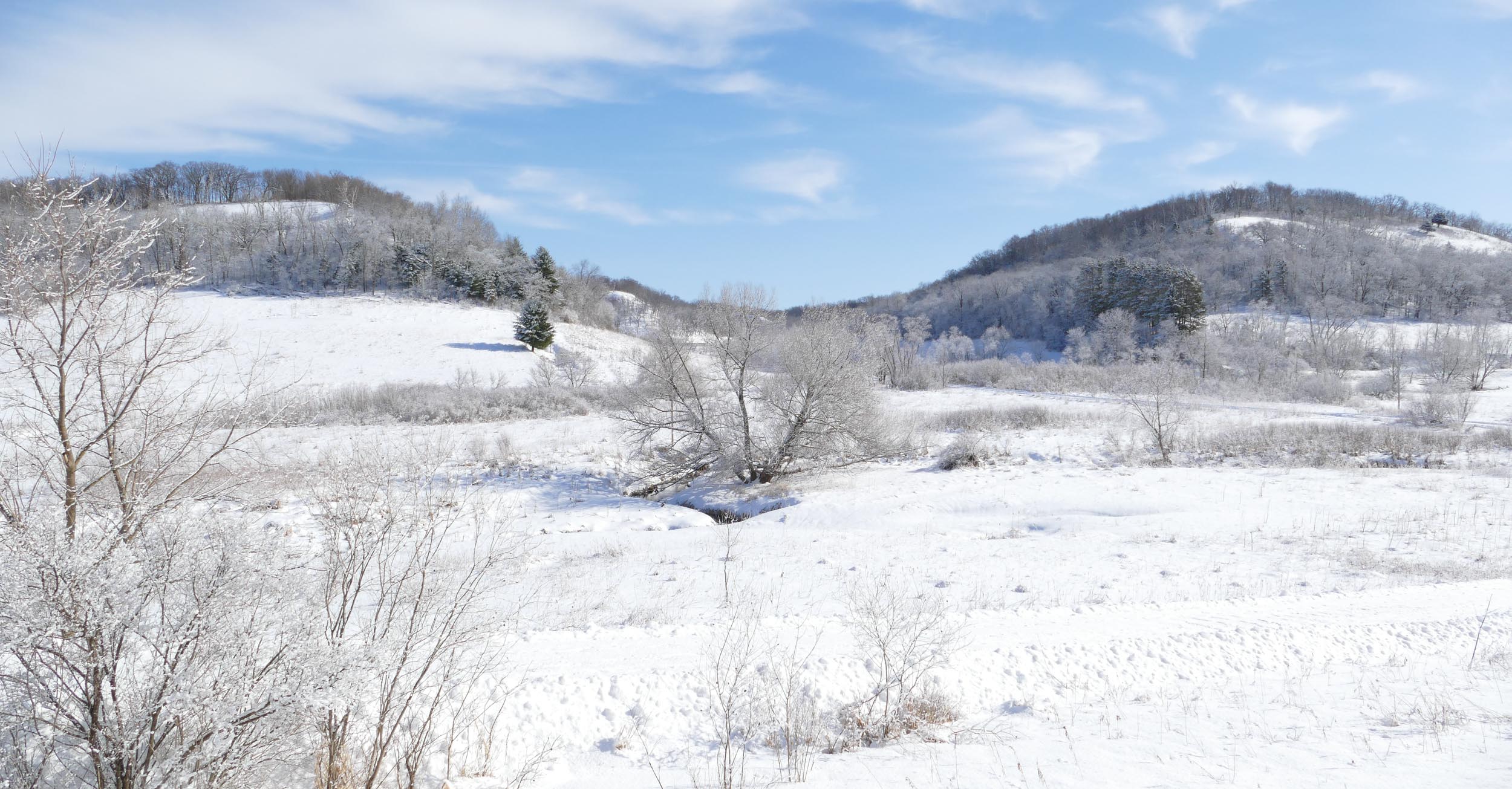 The ice melted in interesting ways.  This was a large puddle behind a frozen culvert.  When the culvert opened up, the water underneath ran out leaving a skim of ice across the top of the plants. 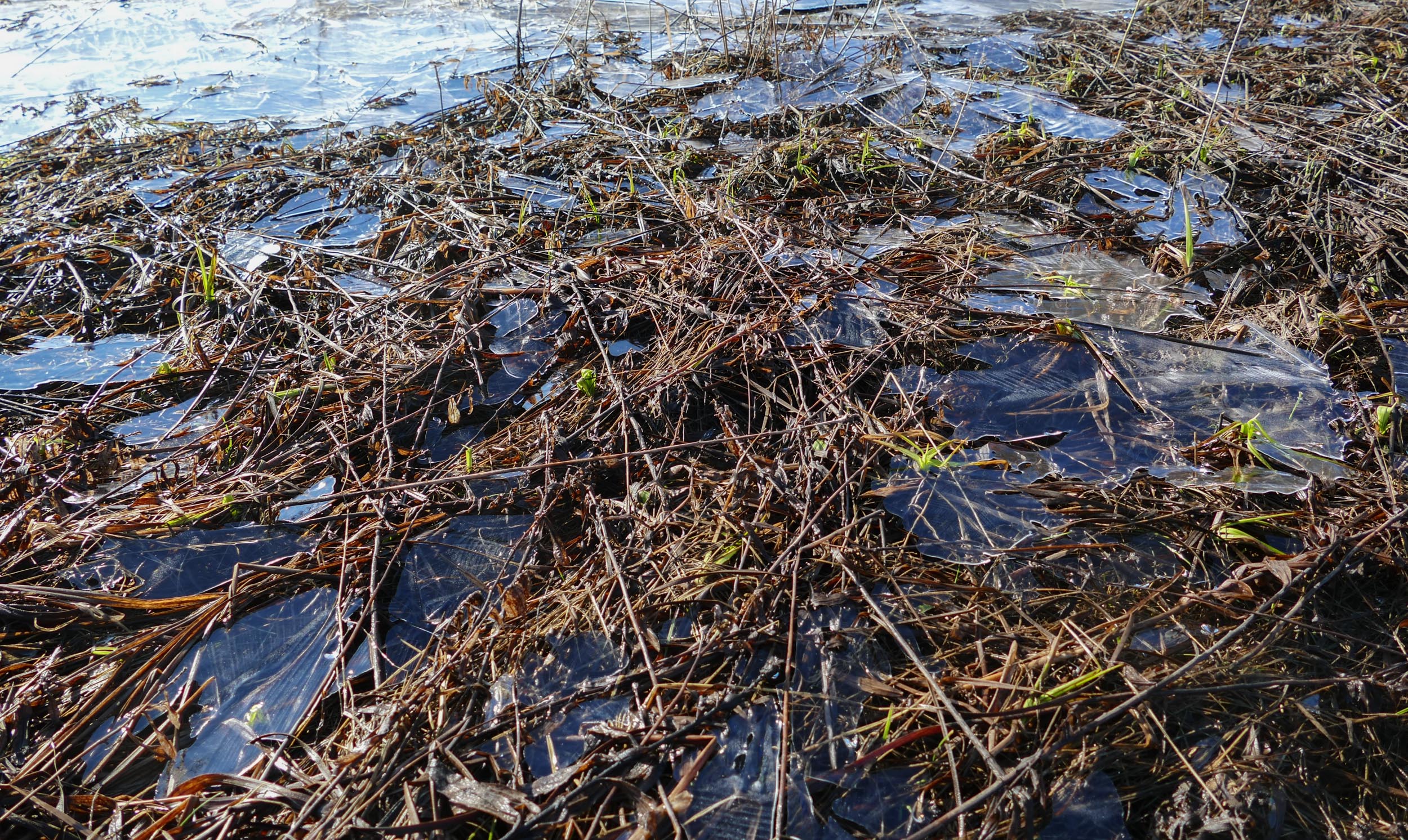 Cabin Creek had a thick layer of snow and ice over it all winter.  When the creek started melting, it melted from underneath, leaving a thin bridge of ice across the creek.  This photo was taken after the middle had melted through, but there are still shelves that stick out from both banks. 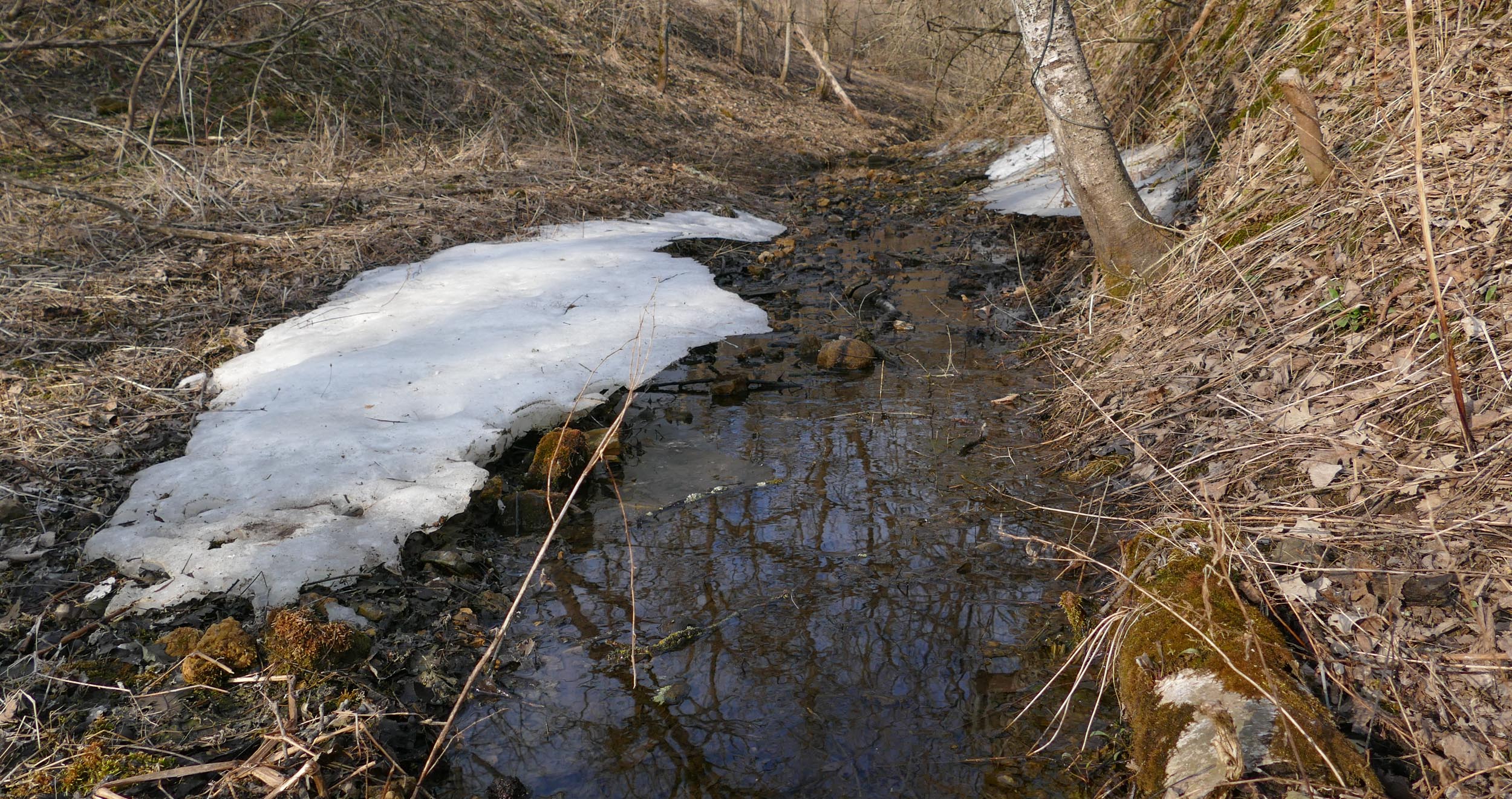 The view from the Knife Edge Point – still snow on the north-facing slopes. 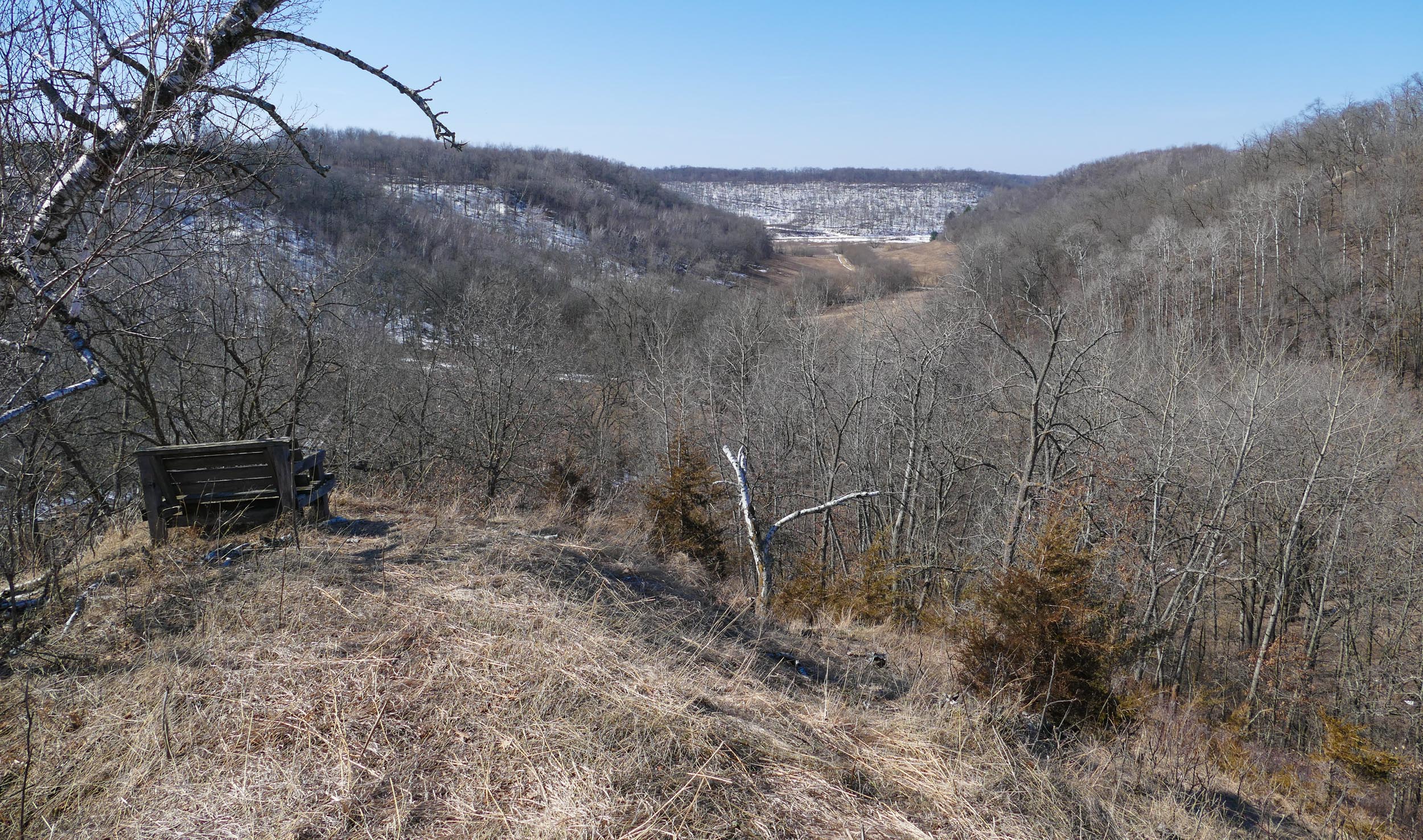 Spring cleaning – the garage, not the house – showing where our priorities are. 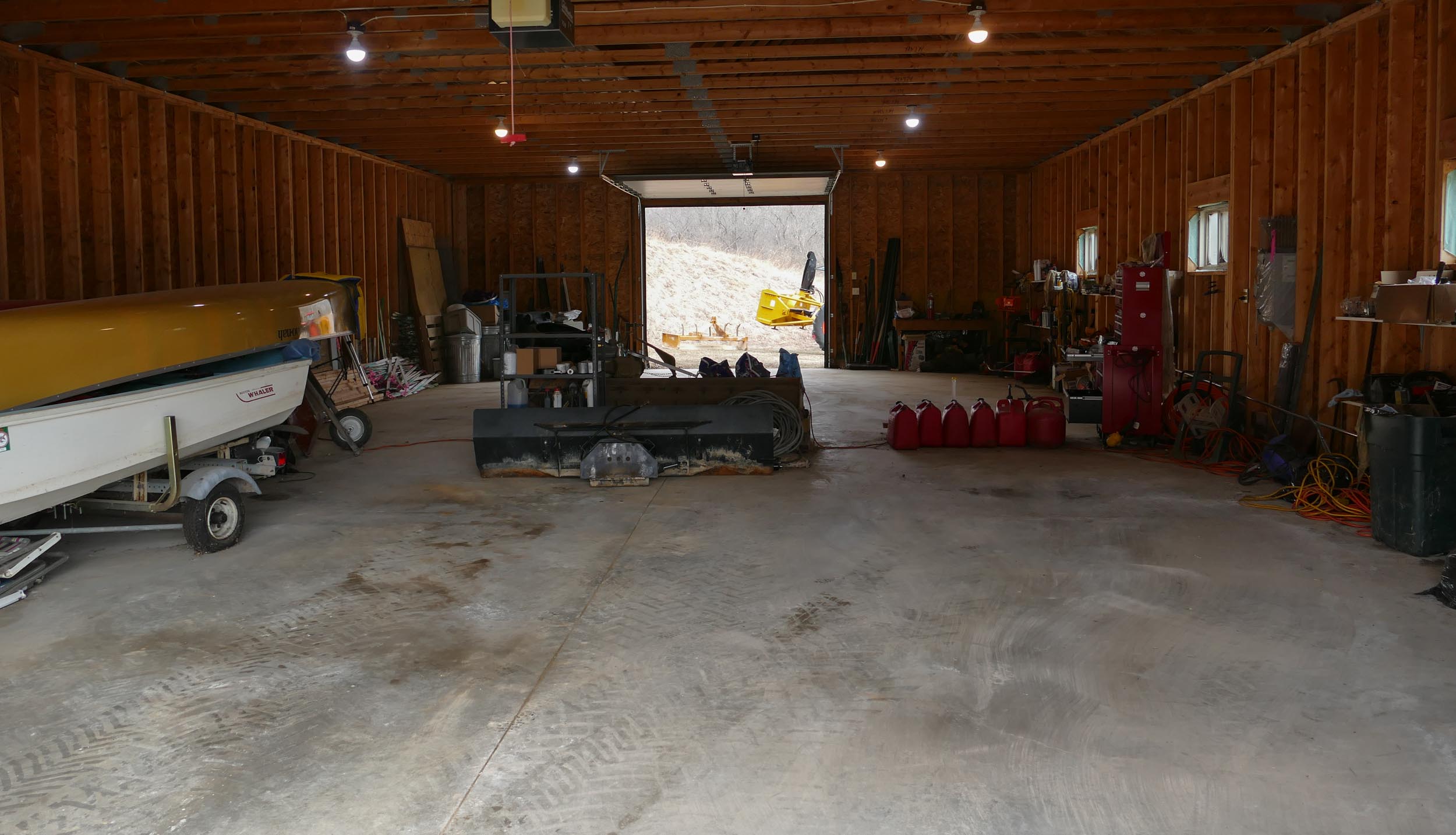 The vehicles waiting to go back inside 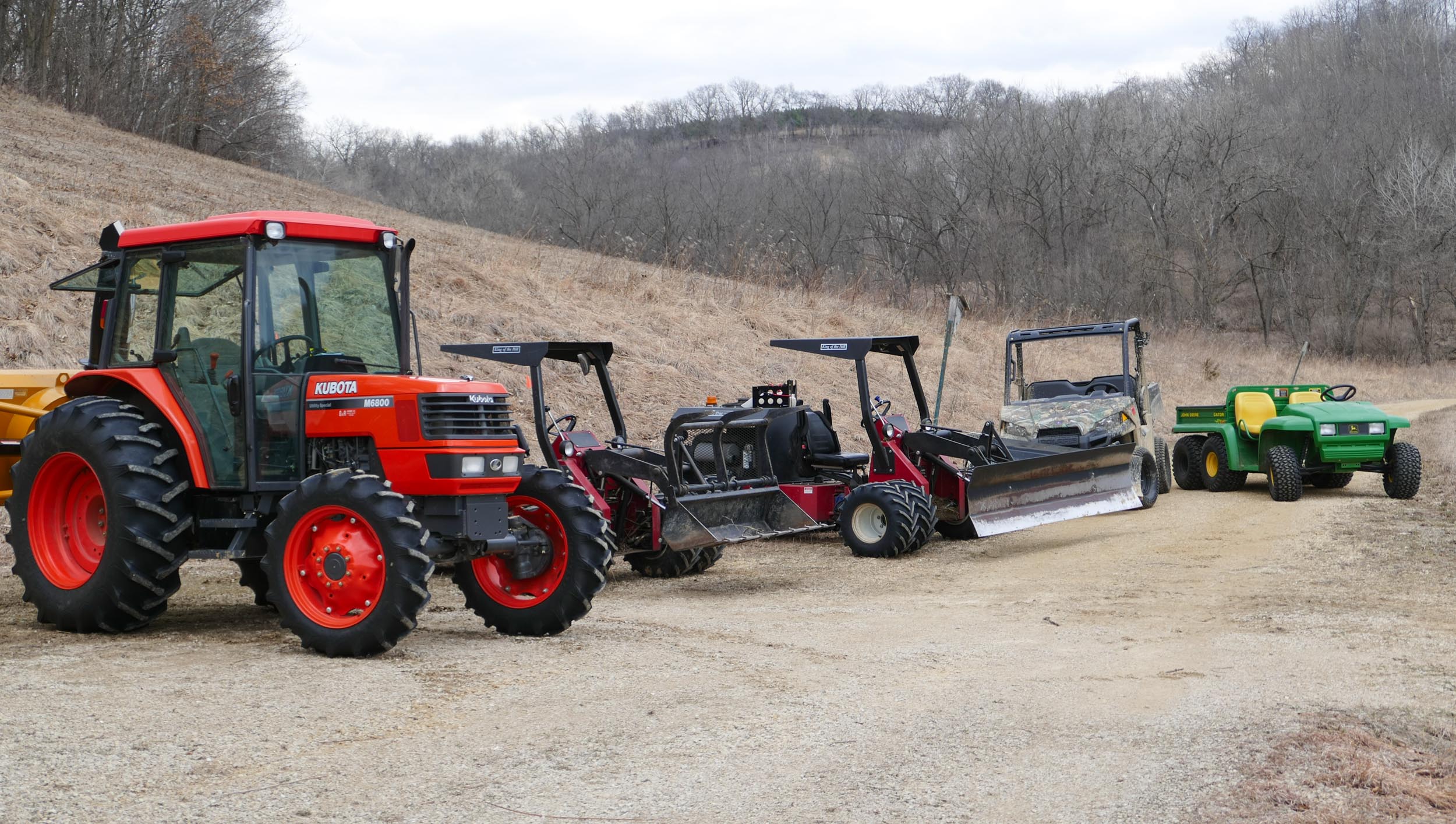 Another spring ritual – raking the driveway 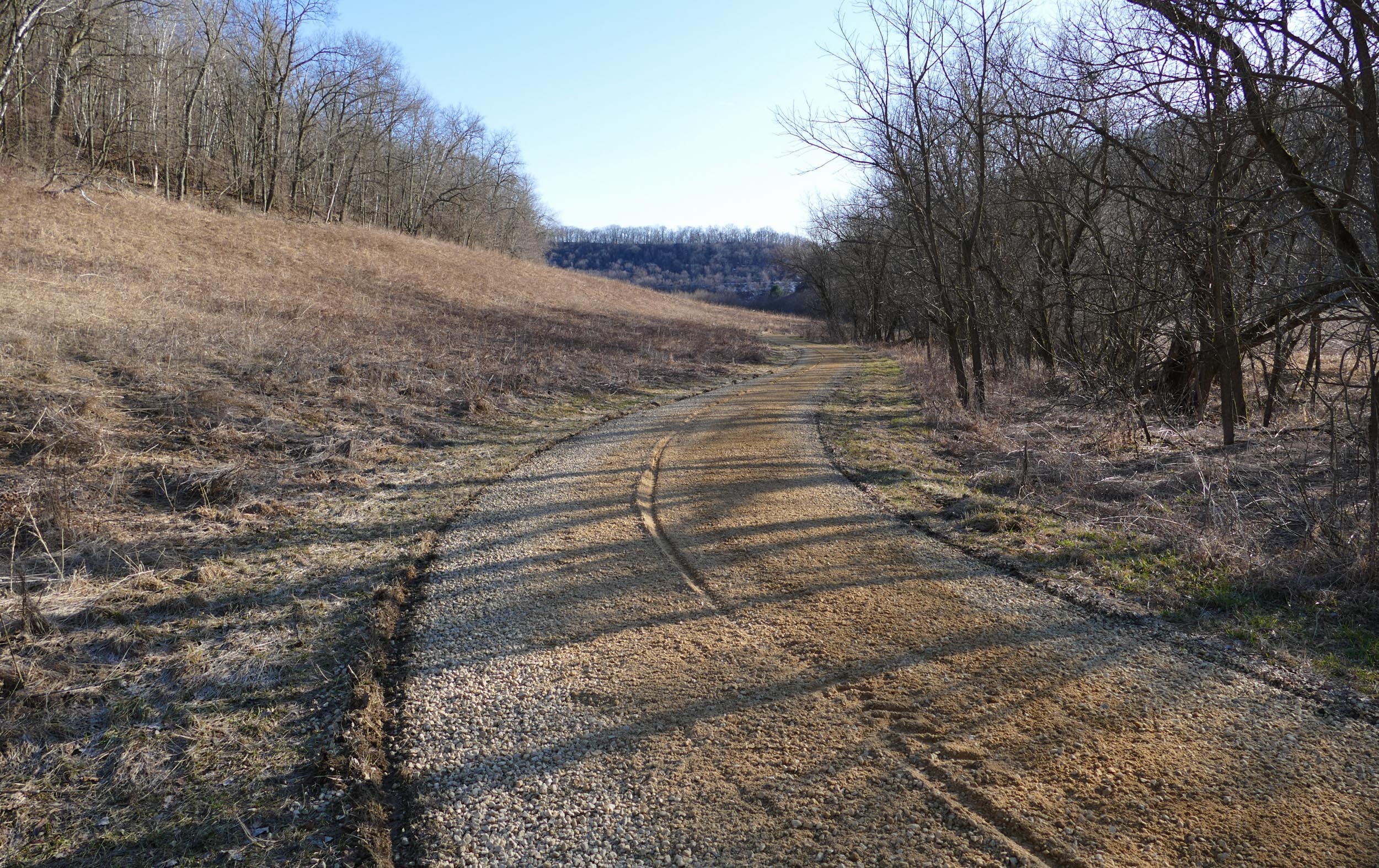 And taking out the spring beaver dam.  The beavers have lots of dams in our stretch of the creek, but when they build in this spot – right next to the driveway – the creek floods the driveway.  So we discourage them by removing the sticks as soon as they start building. 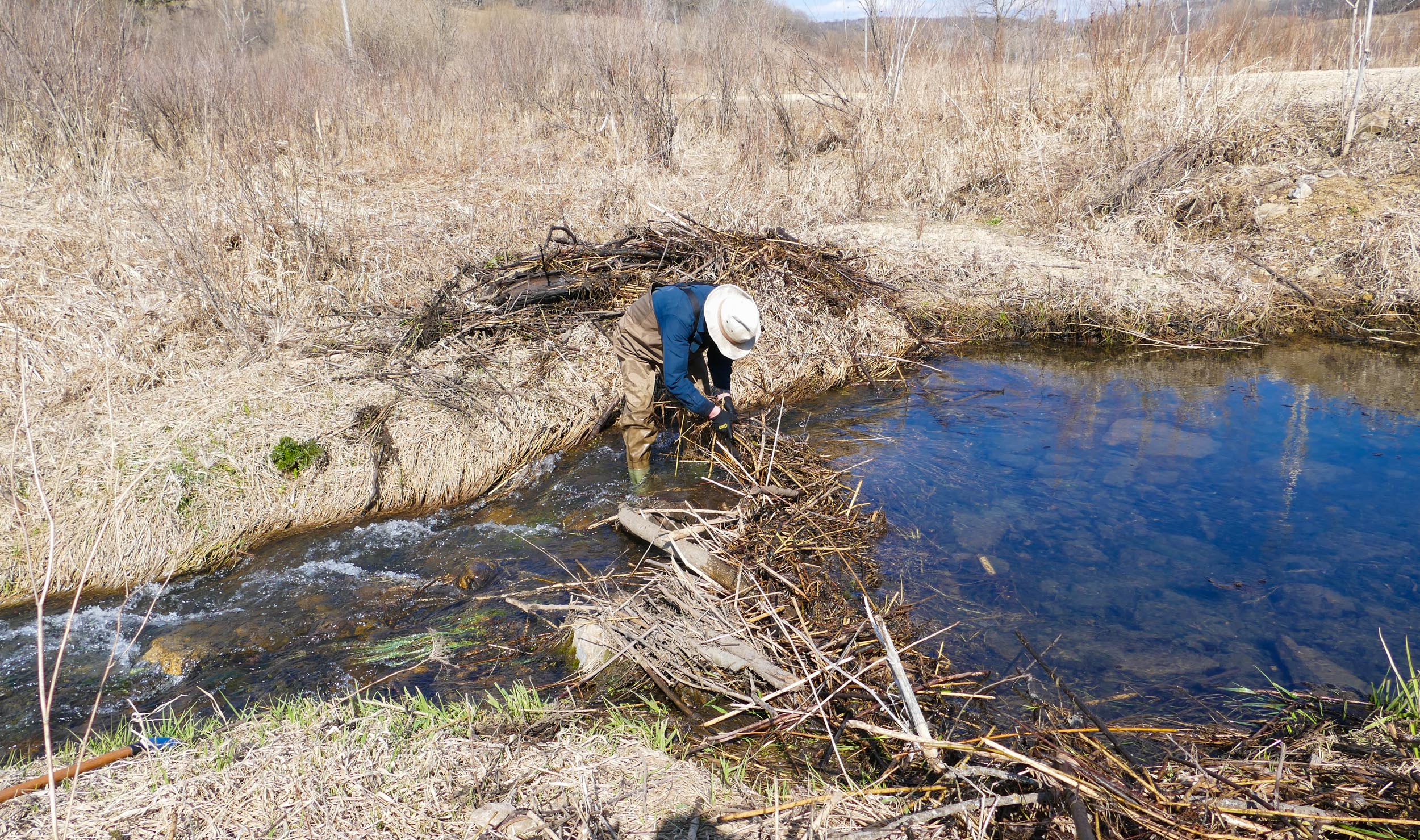 We don’t see as many Gray Squirrels here as in the city – I think because we have so many predators.   About half the ones we see are black, rather than gray.  In the last few weeks I’ve seen a few other interesting color variations.   Black with a red tail… 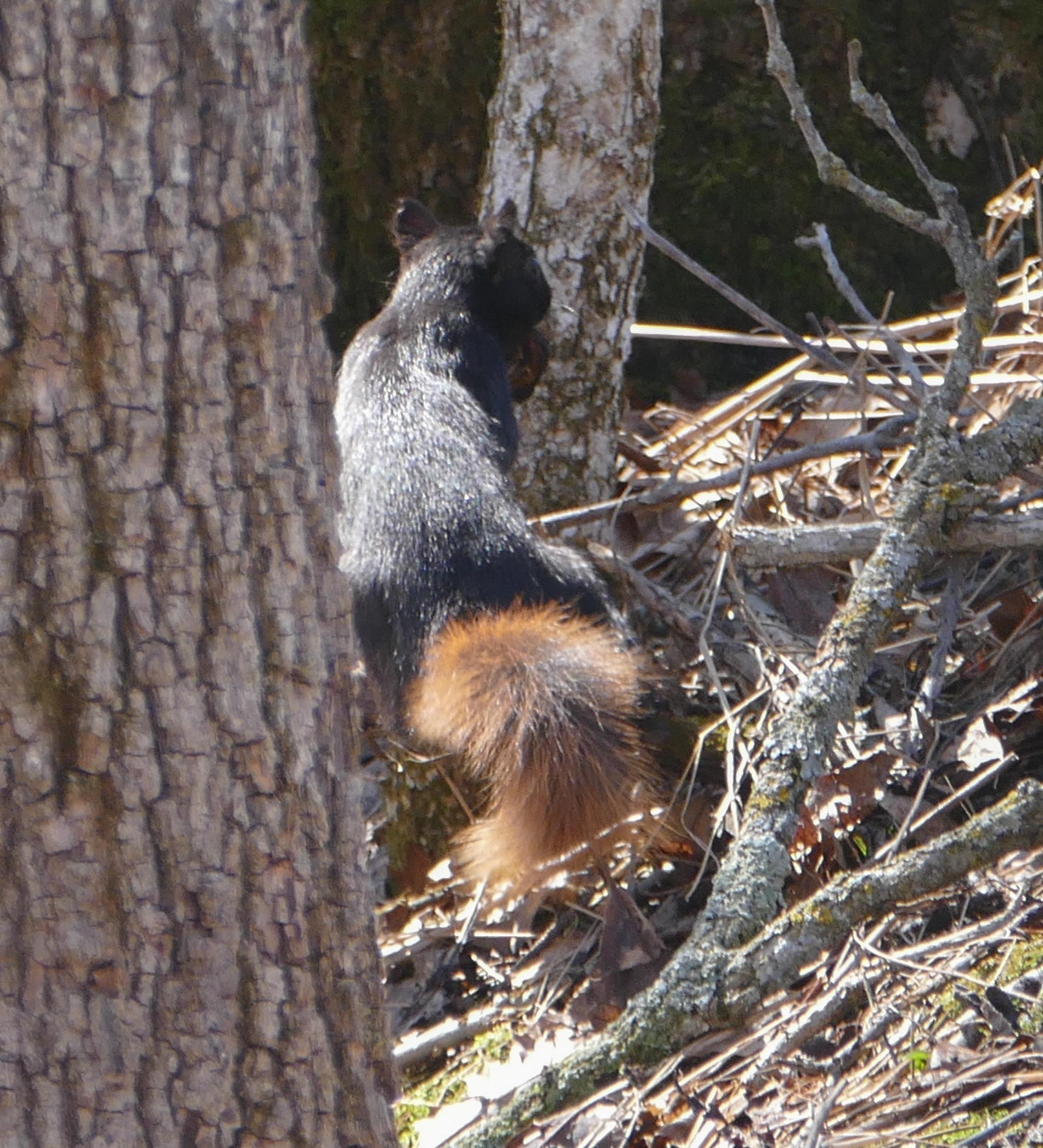 and black with white spots. 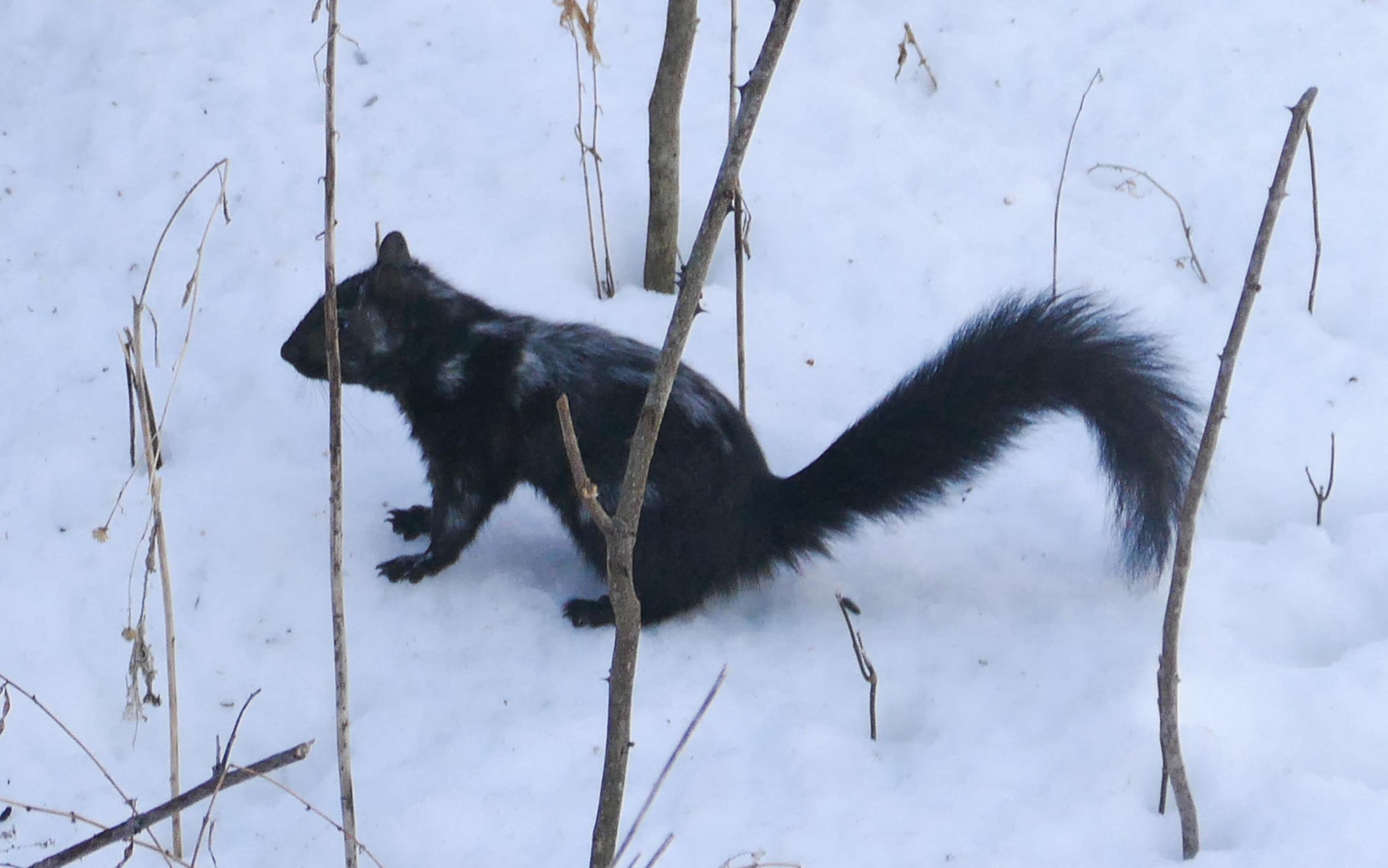 Now that the snow is finally gone, spring plants and animals are starting to appear. 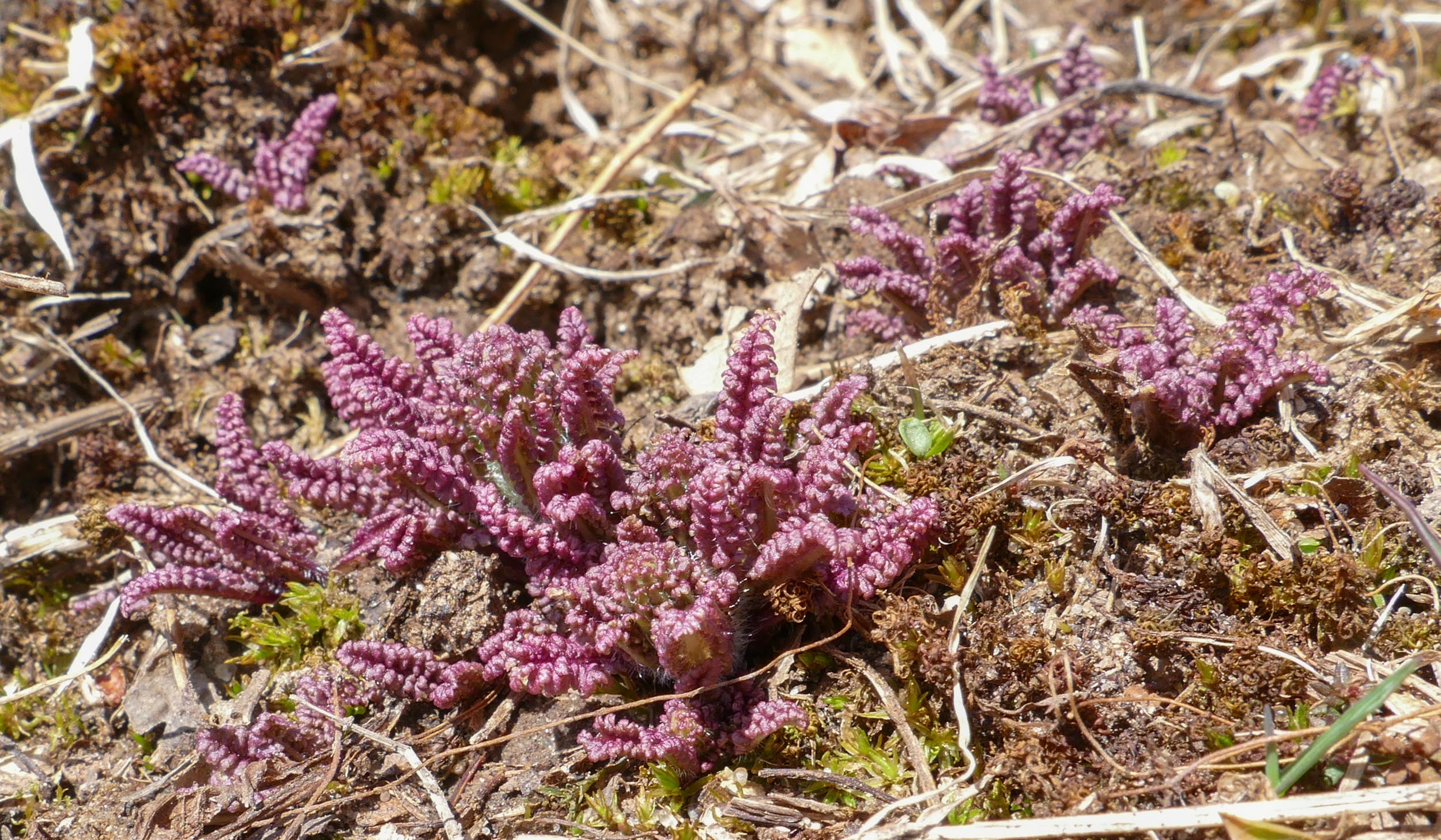 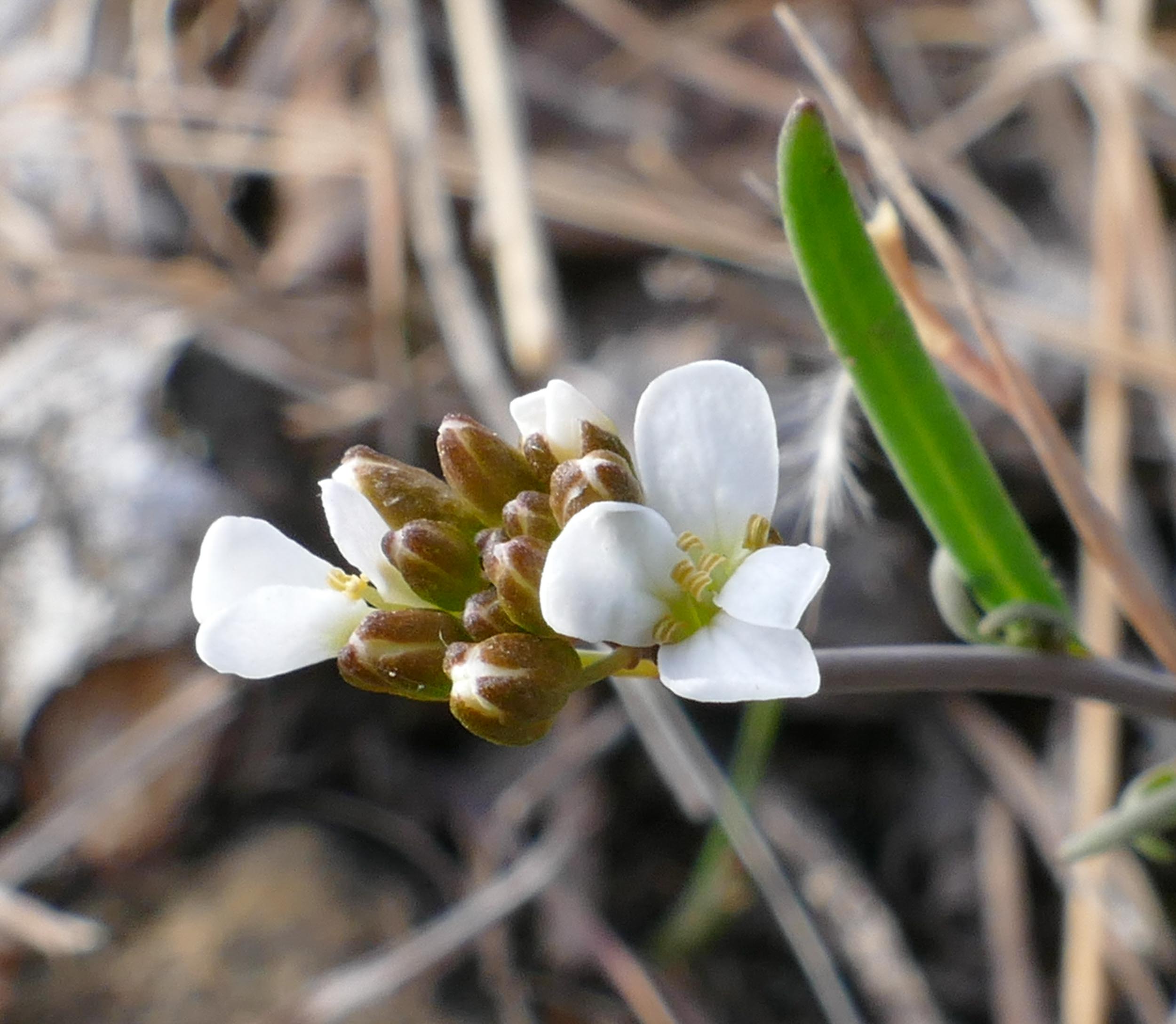 An Infant Moth – we usually see these in mid-March, but last week was the first weather we’ve had that was warm enough for them. 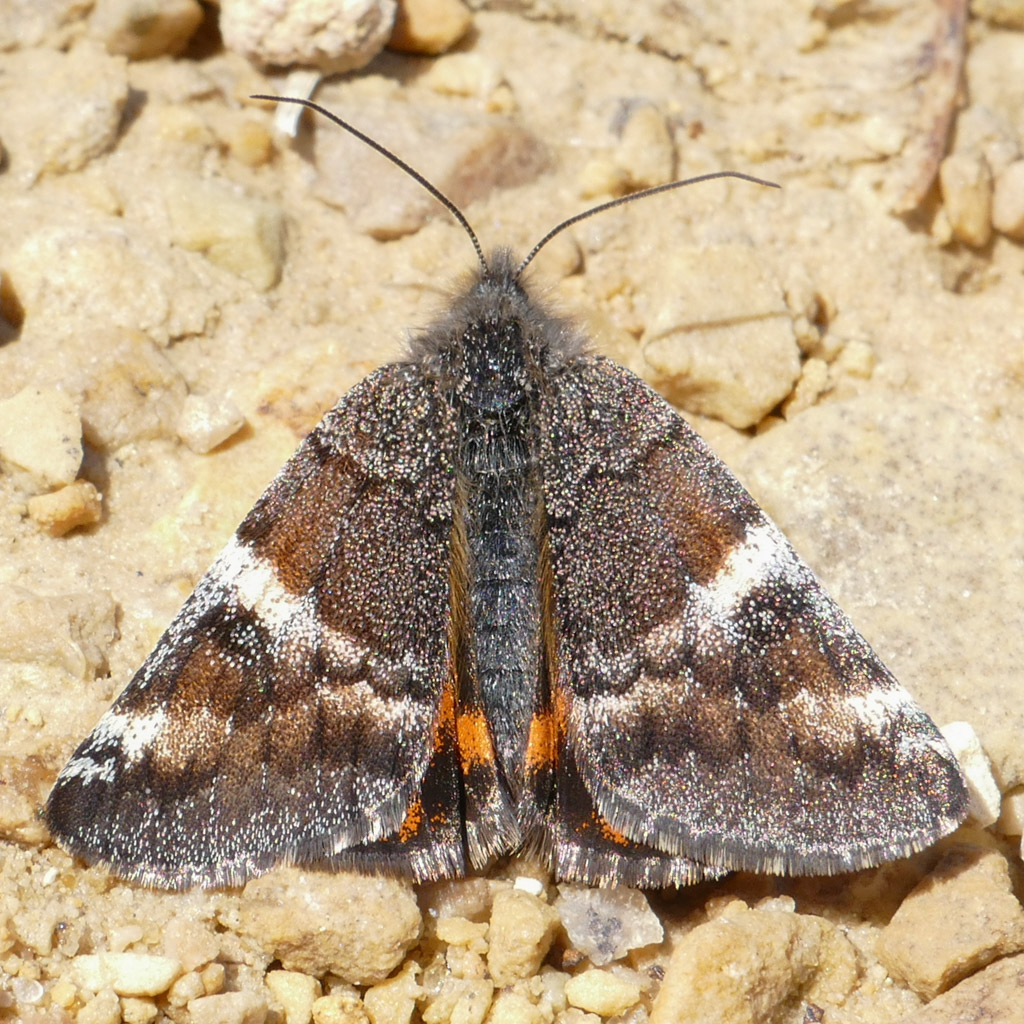 Compton Tortoiseshell butterflies overwinter as adults – this shows how worn they sometimes get after a hard winter. 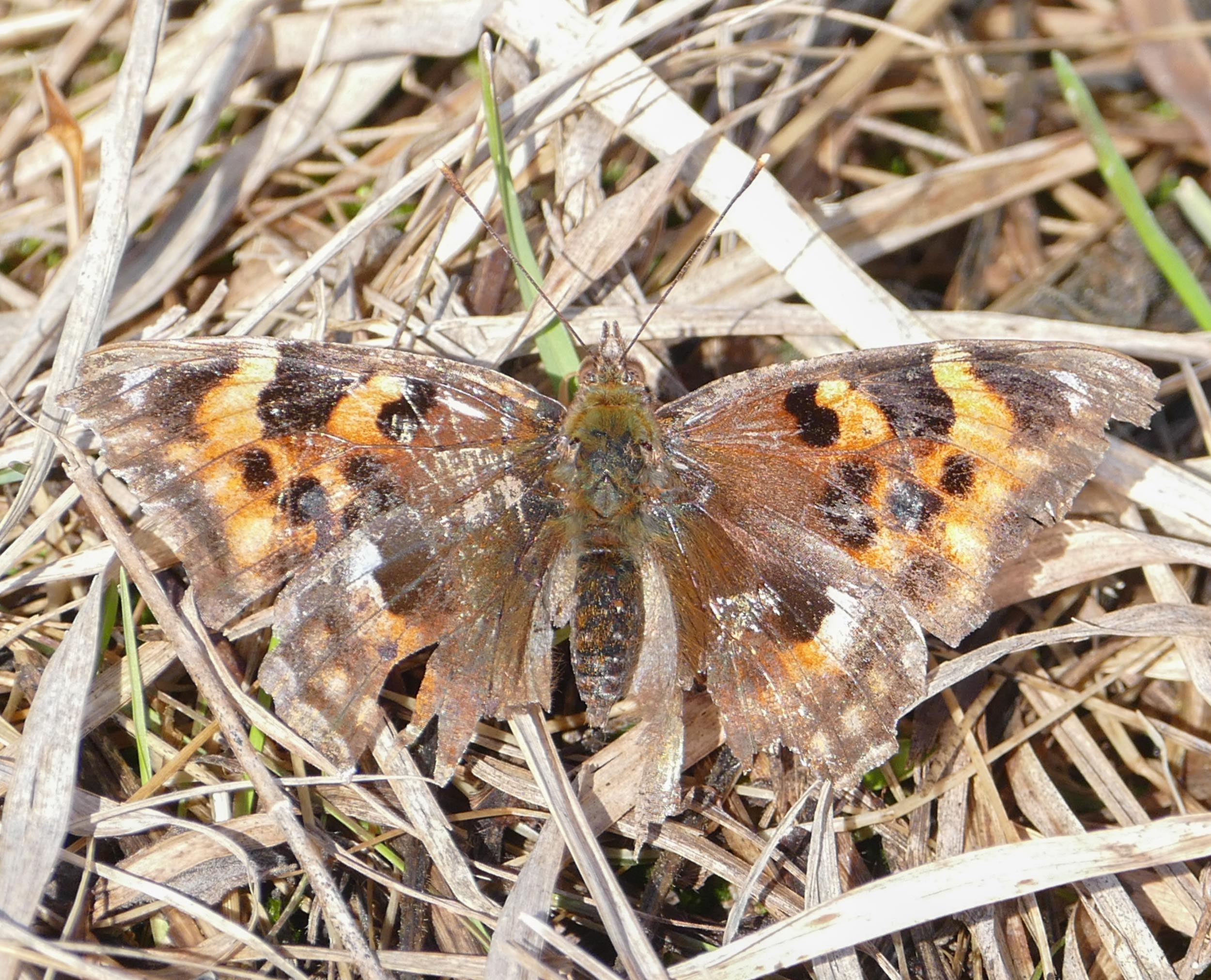 Another Comptons Tortoiseshell – in better shape 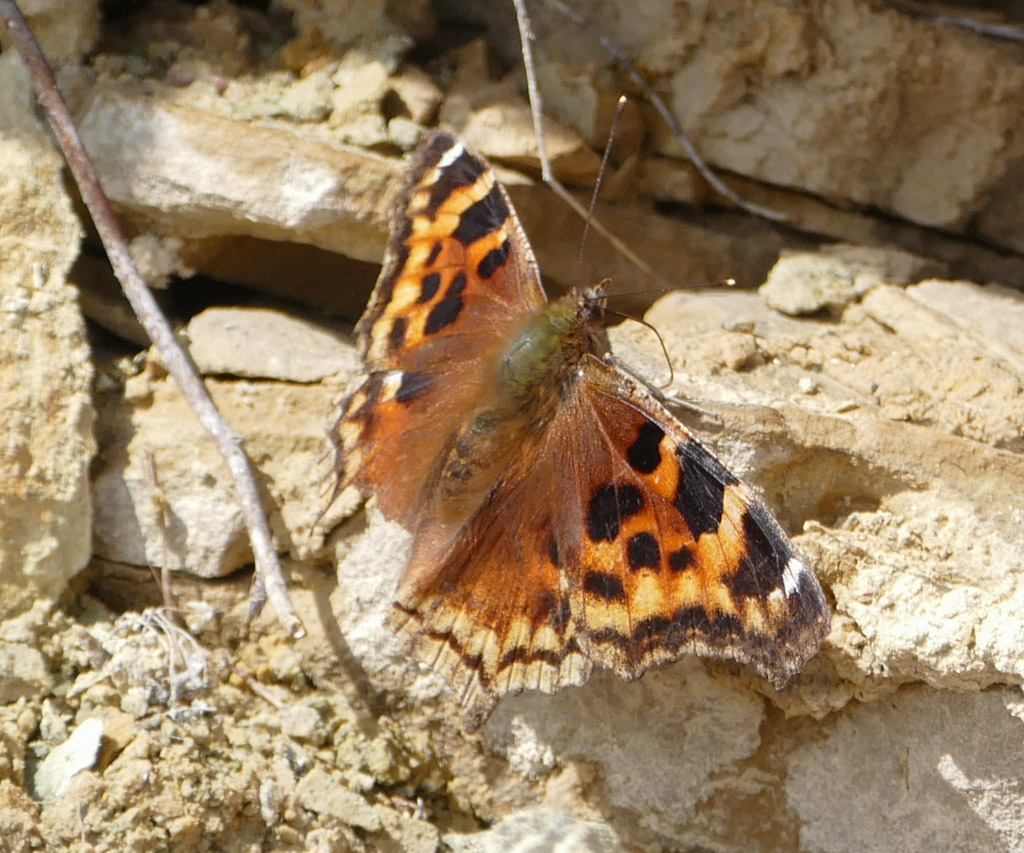 This raccoon spent an afternoon grooming and sleeping in the tree outside my window. 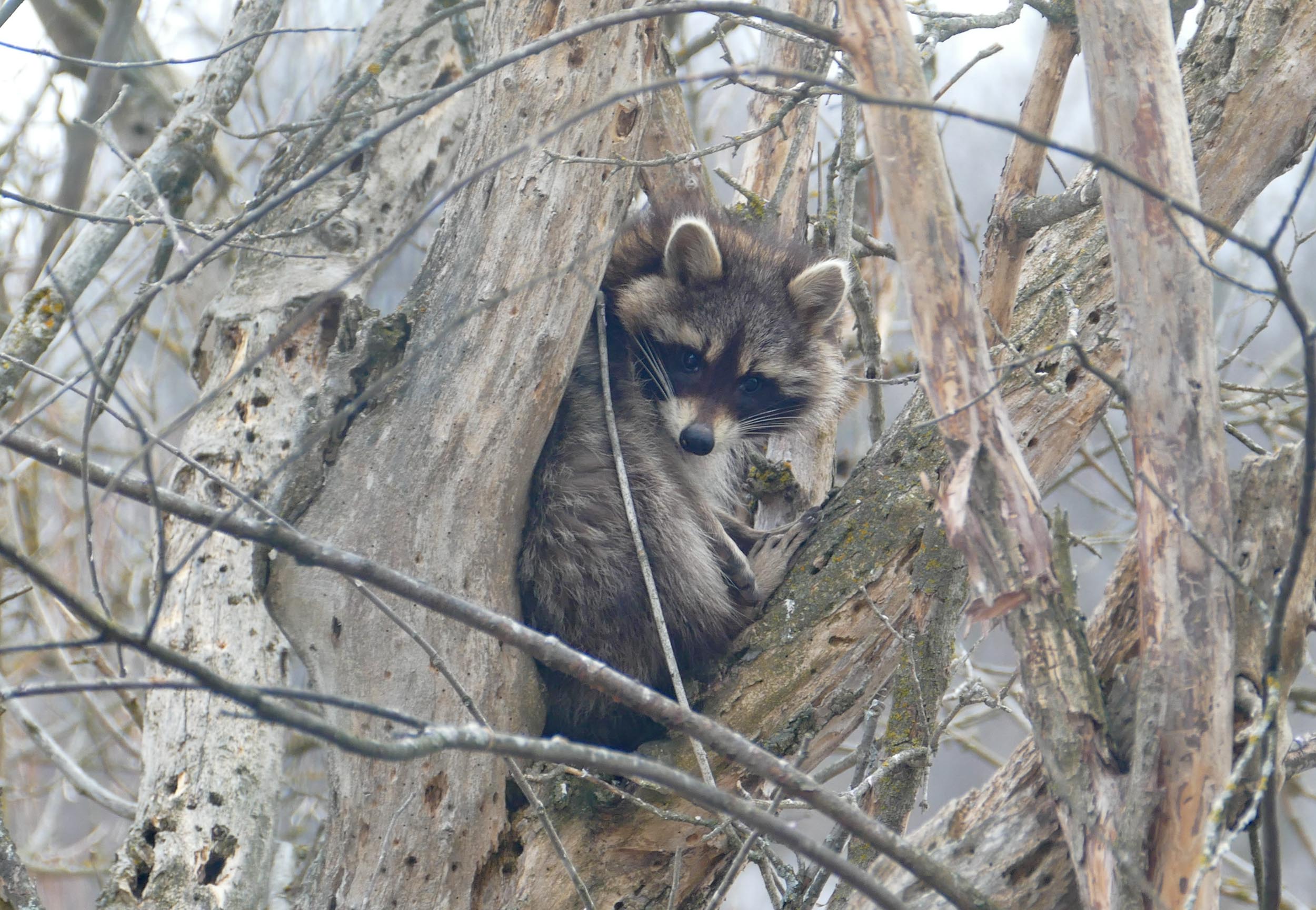 Crocuses still bloom in what remains of the old lawn of the farmhouse.  This one attracted an early native bee. 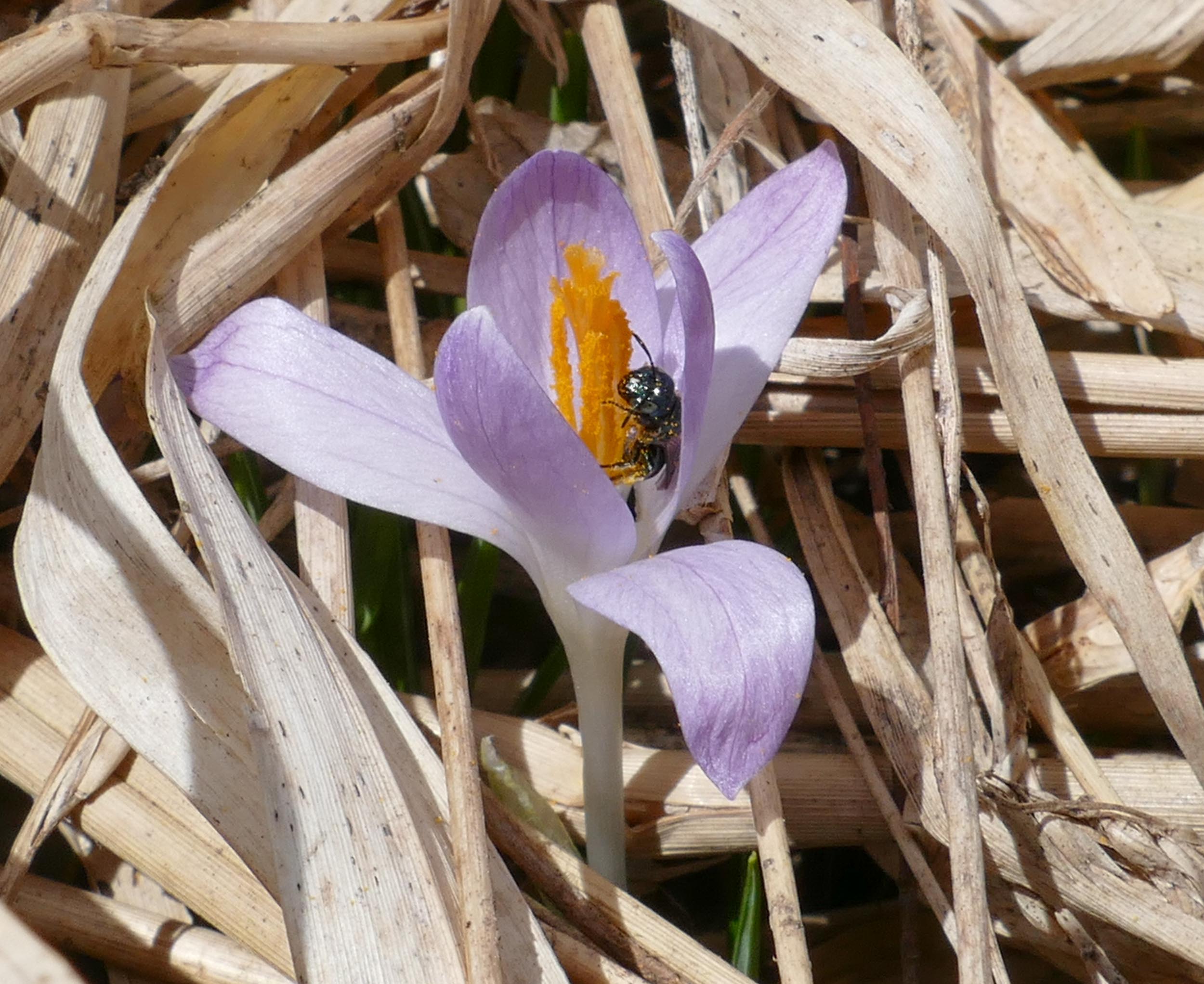 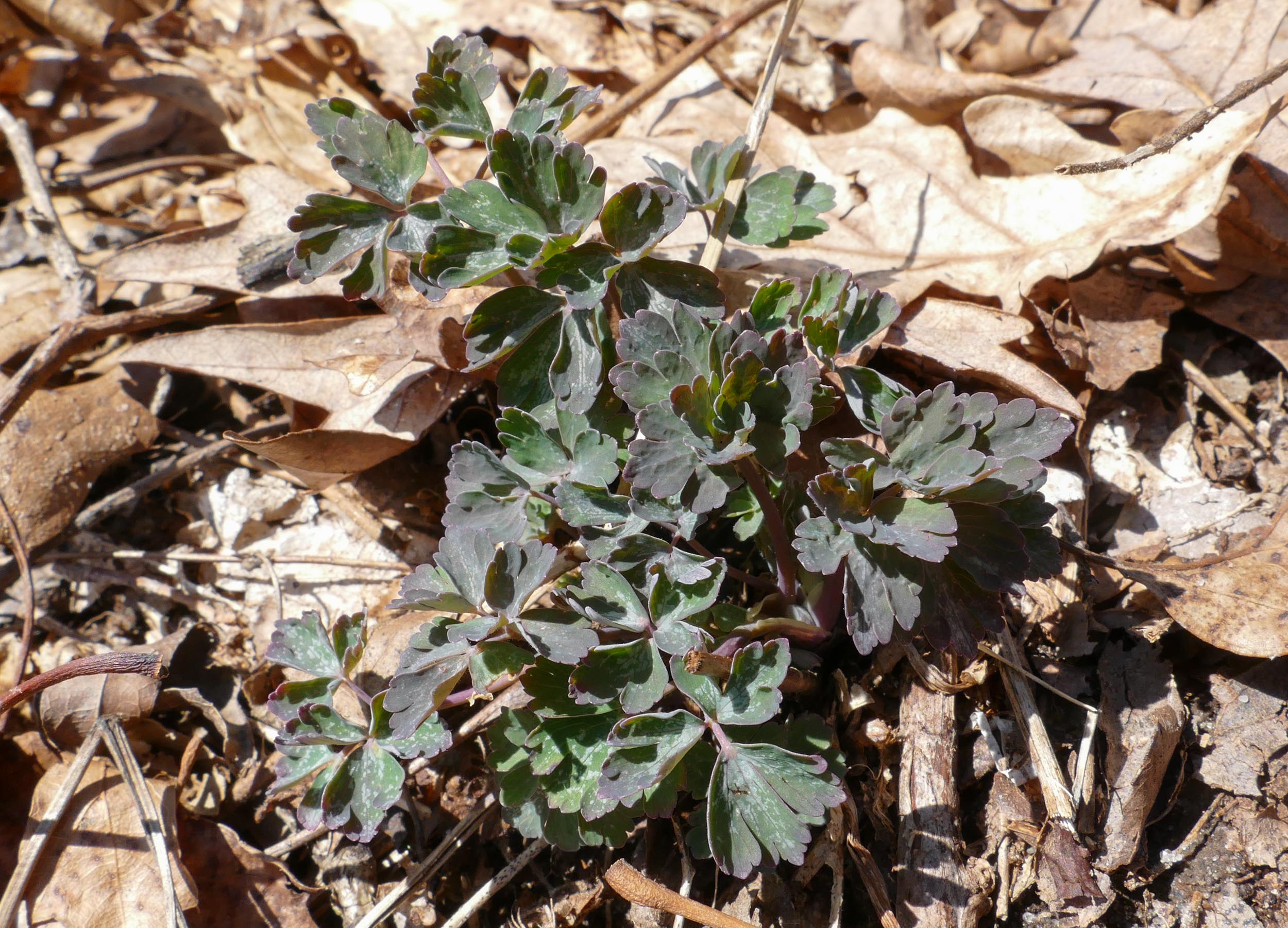 We’ve been experimenting with my new camera – an Olympus with a macro lens –  trying to get better macro photos.  I want to be able to take photos comparable to ones taken through a dissecting microscope.  We put the camera on a tripod, used focus stacking, and got some good results.  I really want it for insect photos, but since there weren’t any insects available, I tried it on lichens and dried plants. 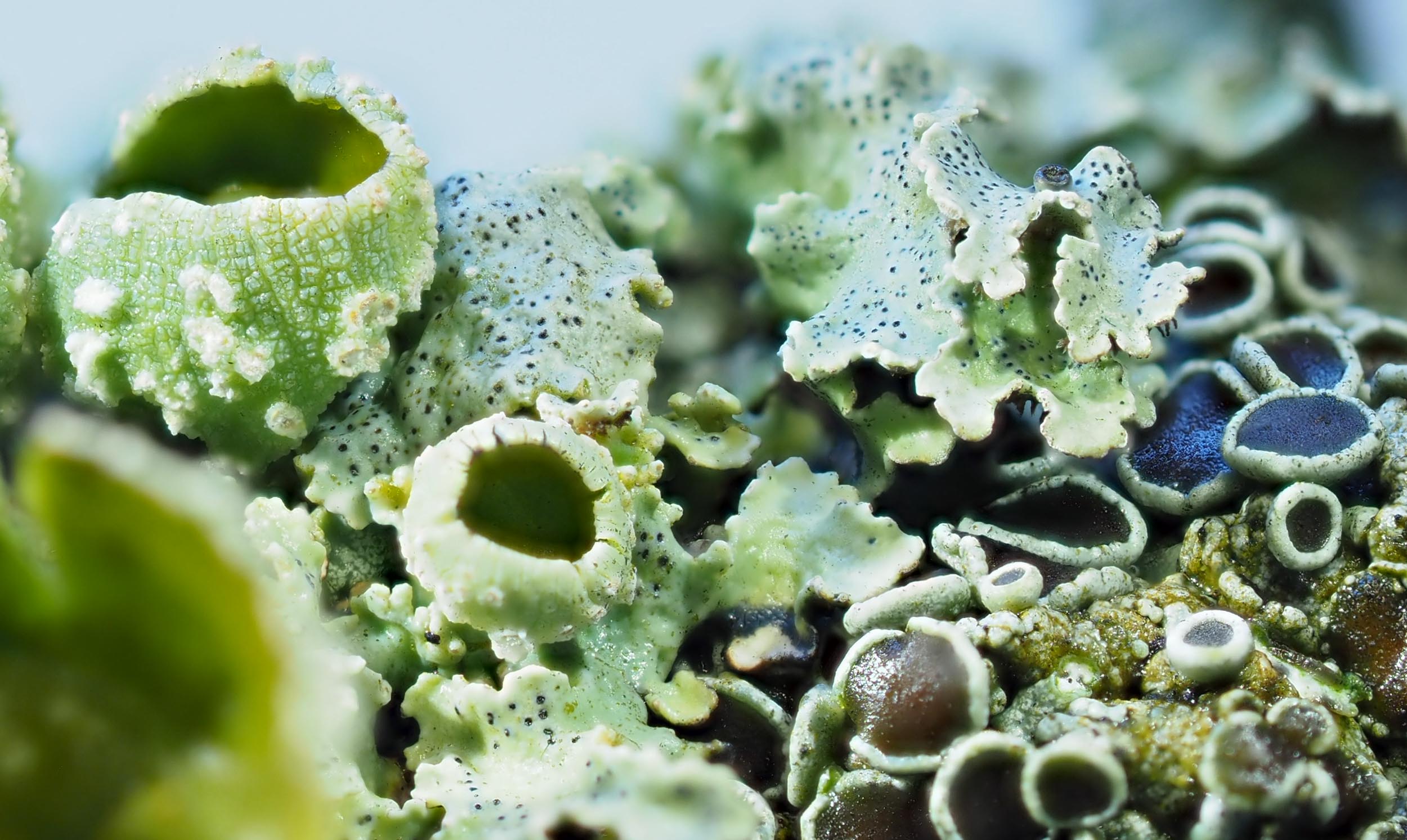 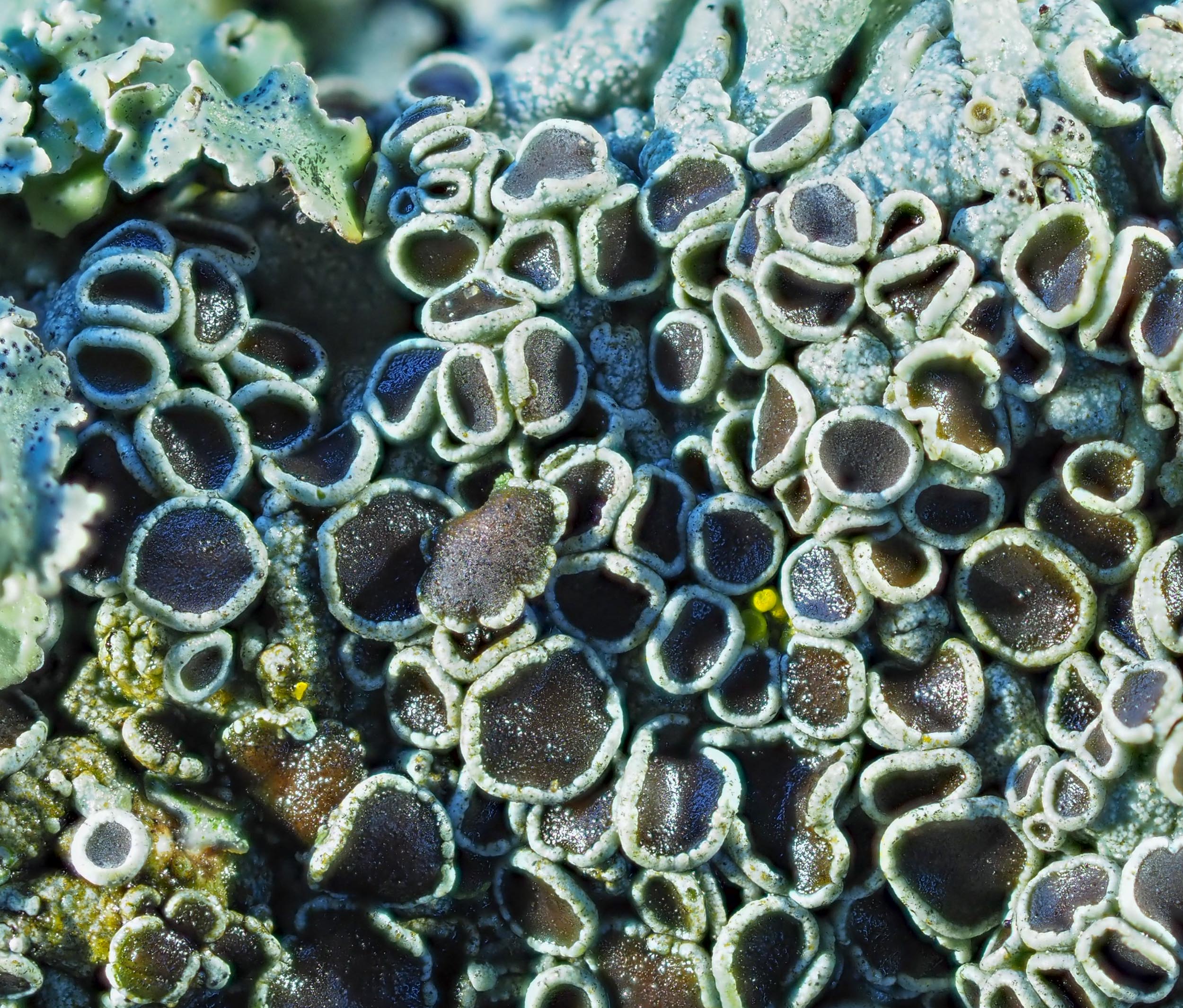 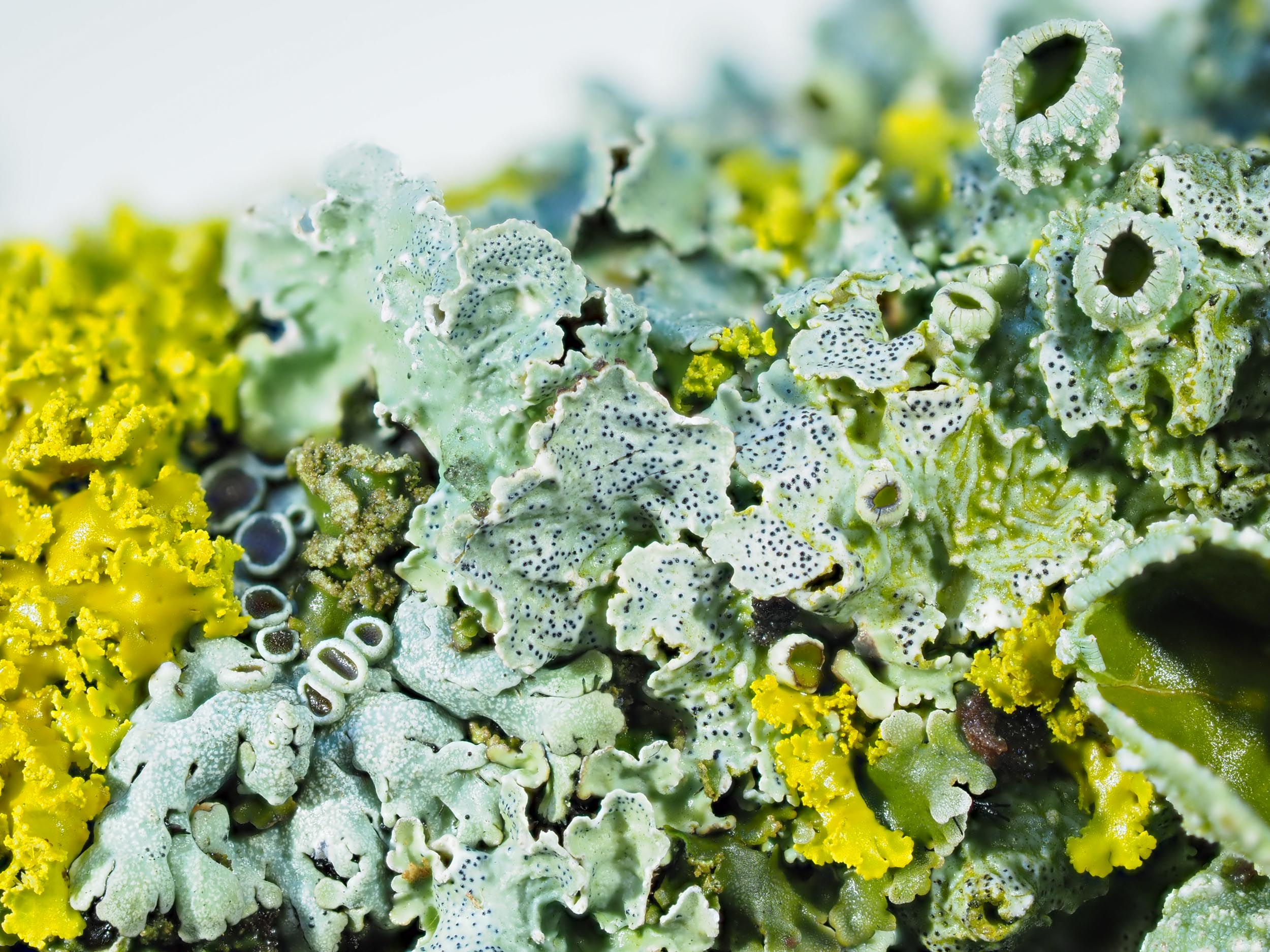 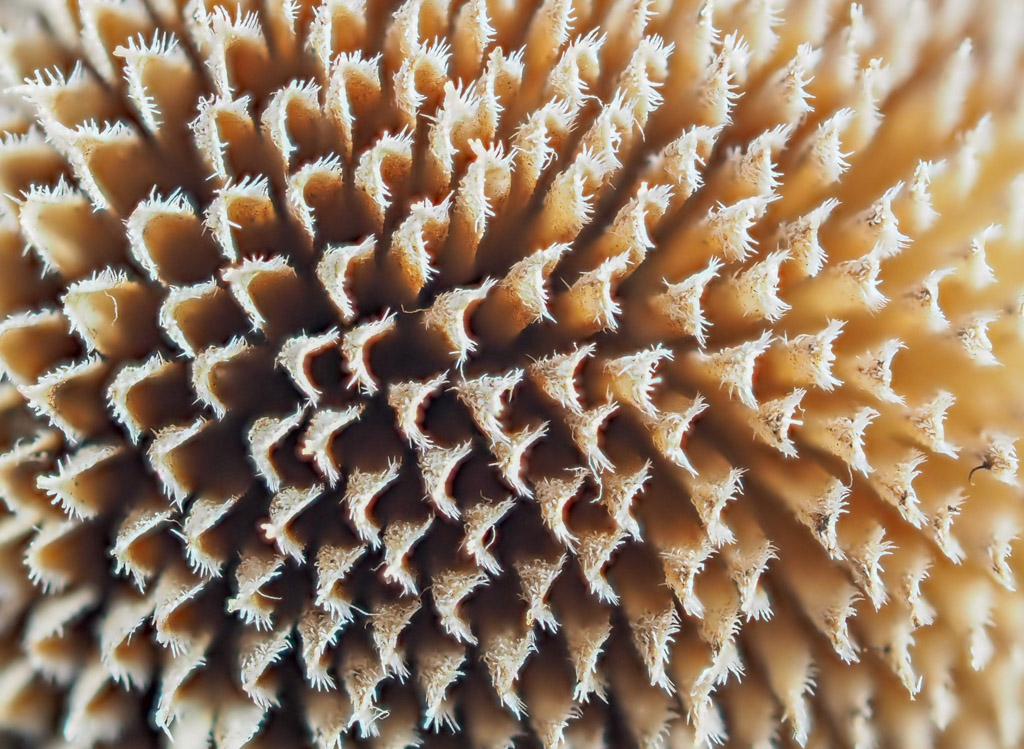