The days really feel like November now – rolling gray clouds, blustery wind, cold rain, and icy blue skies.  The high temperatures are in the 20s – pretty cold for working outside.

We finished our fall project just before the cold weather arrived.  This year we’ve been working to clear the brush and small trees from the south and south-east facing slope of Hidden Oaks Point.

Here are some old aerials of that area, showing the top of 3 Finger Valley, where the 3 fingers come together.  Hidden Oaks Point is the point between the center finger and the right finger.  In 1939 the hillside sloping down into the right finger was heavily grazed and very open, with only a few trees.  By 1995 it was overgrown with birch, aspen and brush including prickly ash, honeysuckle and buckthorn.

Over the years we’ve worked on the strip of land that goes up the tip of the point, and opened up some of the savanna areas on the top flat part of the point, but the south and south-east facing slope below the point was still thickly overgrown.

Here’s the way the point looked in 2001, the year after we bought the farm. 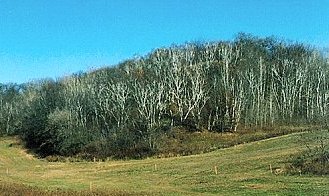 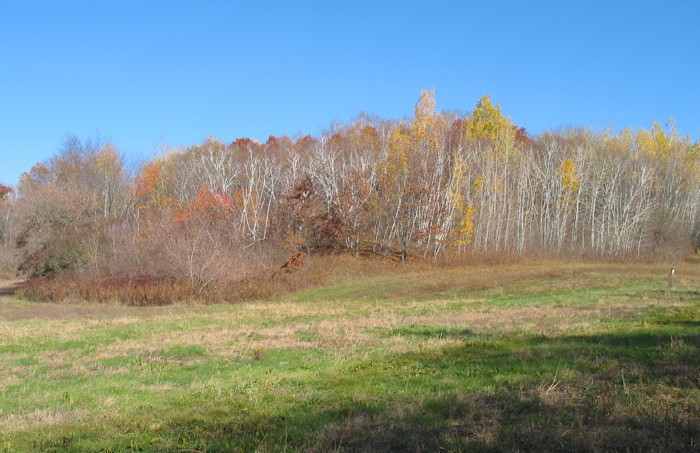 Over the next few years I girdled the aspens and birches.  As they died, they fell down, turning the hillside into an impenetrable jungle.

In 2010 Carlos came down and helped us clear one strip of the jungle.  It took the 3 of us the whole day.  Here’s Carlos at the beginning of the project, before we’d worn him out. 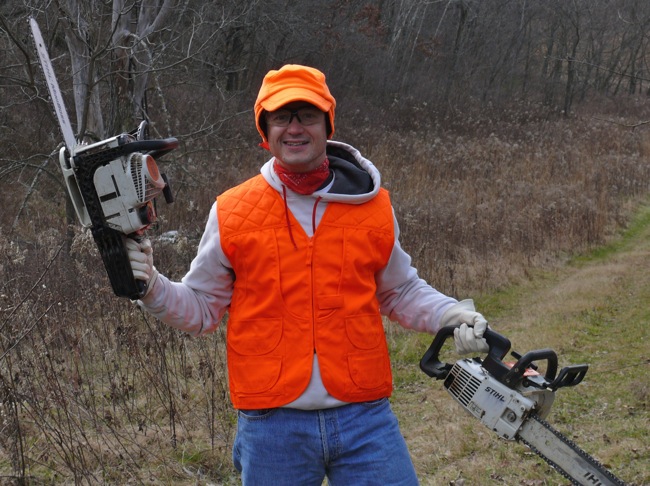 This year Mike and I decided to see if we could make some more progress on the south-facing hillside.

Here’s what it looked like a few weeks ago – just before we started work.

And this is what it looked like on November 15th – the day before winter arrived.  (Click on either of these photos to see a larger version of the pictures.) 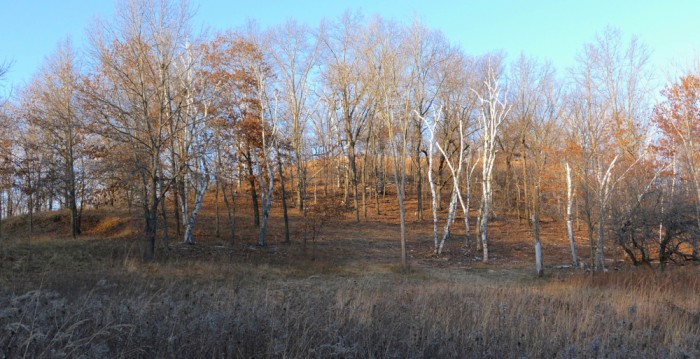 There’s still more to do – more brush to clear, more small trees to cut.  The big dead birches and elms will fall, and we’ll clear them.  But it’s much more open that it used to be.  I think parts of the hillside used to be prairie – very open with no big trees – and parts were savanna.

In one place on the hillside I found a thriving patch of Rattlesnake Plantain – a small native orchid. 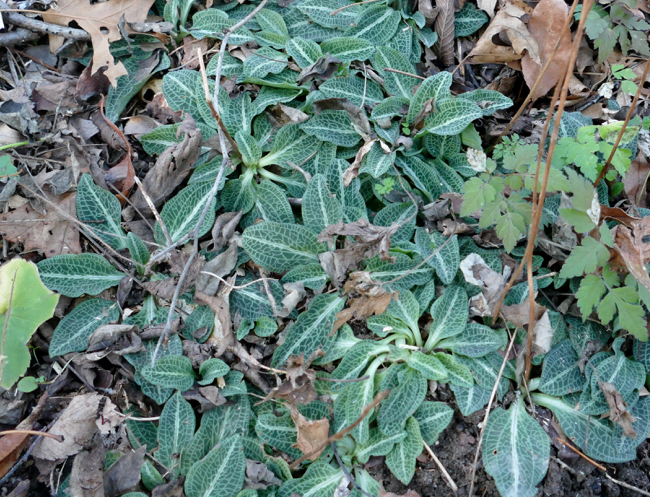 Another big project that we watched, but thankfully didn’t have to actually do, was putting in geothermal heat.  The folks who put in the pipes dug the hole – 8 feet deep, 125 feet long, 50 feet wide – put in the pipes, and filled it in again in two days.

Here’s the hole – hard to photograph because the piles of dirt are so high. 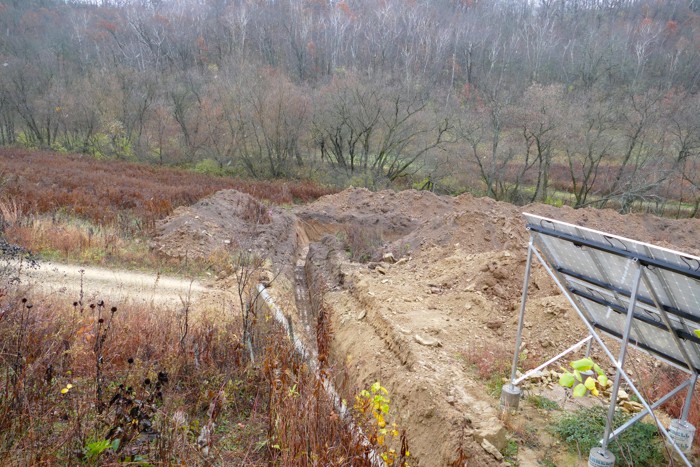 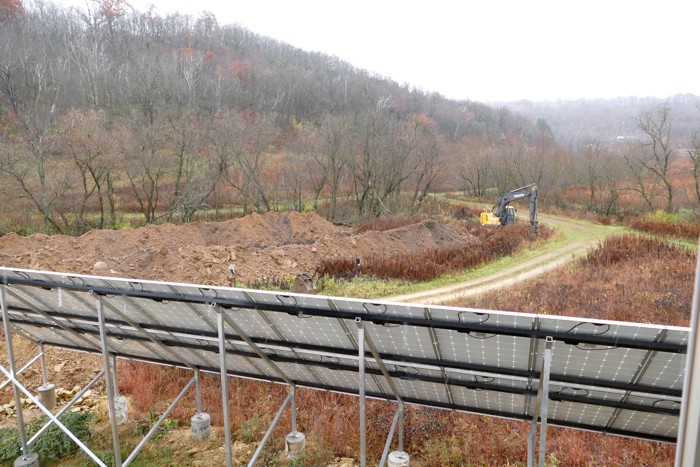 And here’s Mike smoothing the dirt after it was filled in.  I’ll plant prairie over it this winter. 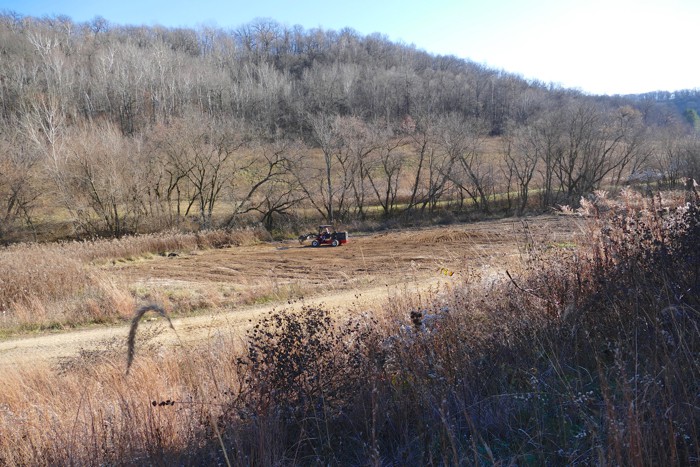 Mike and Tiger enjoying sunshine on the couch 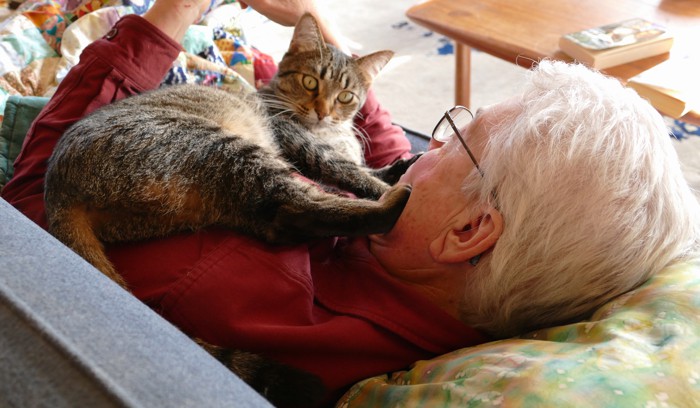 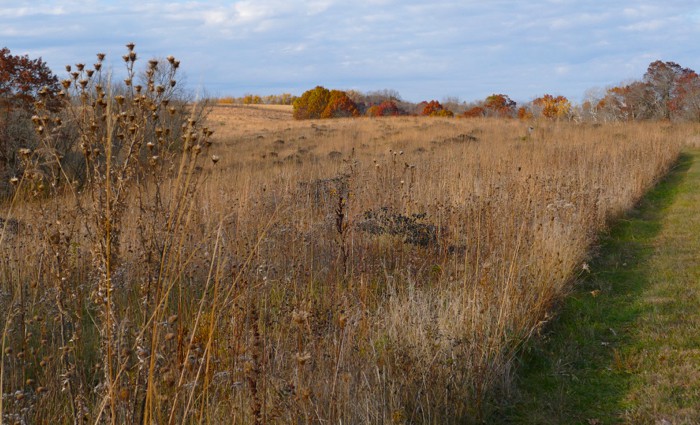 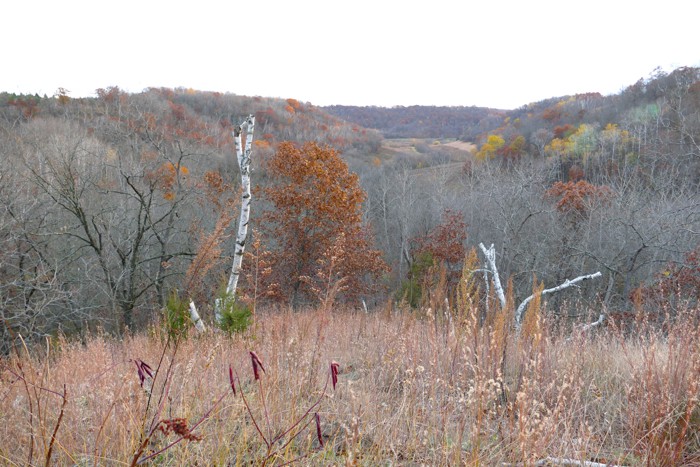 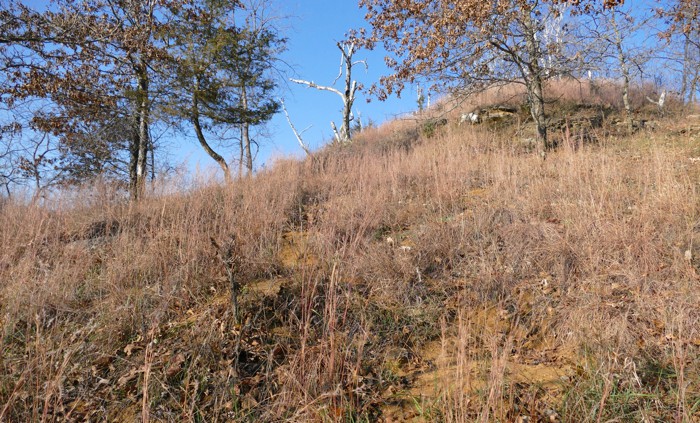 There were still a few flowers blooming until last week. 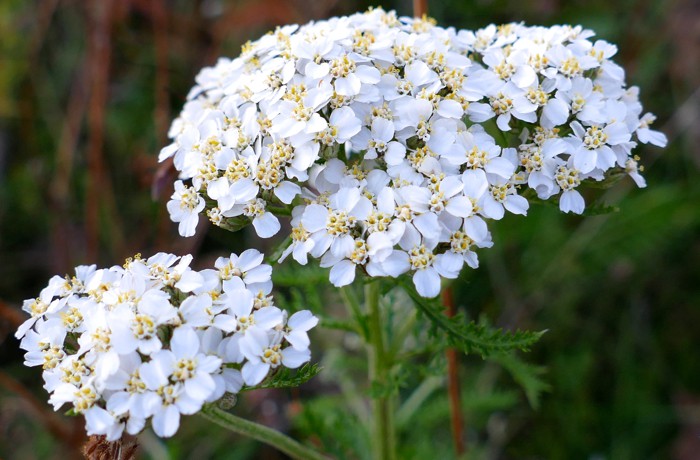 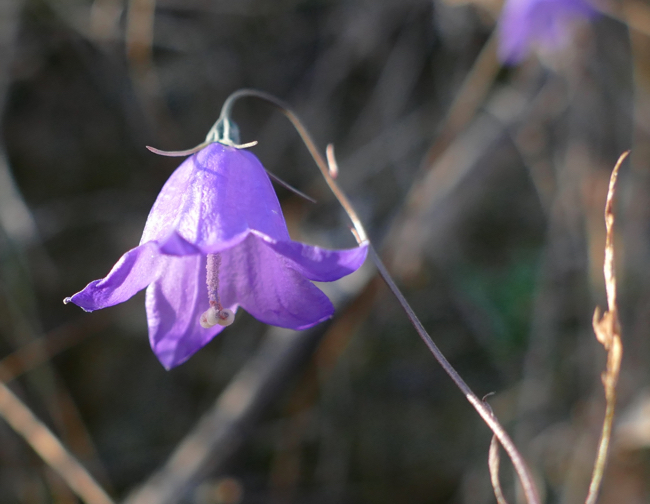 I was still putting out bait for moths until last week.  It attracted several creatures in addition to the moths.

These butterflies shared the bait with flies and ladybugs during the day – November 2nd.   All 3 are Eastern Commas. 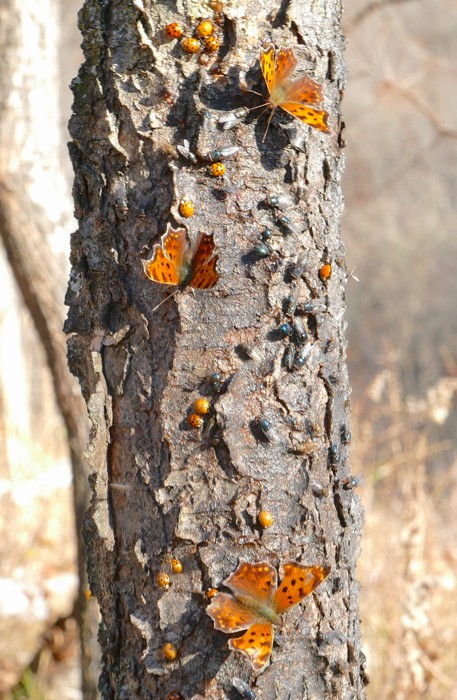 An Eastern Comma on November 9th 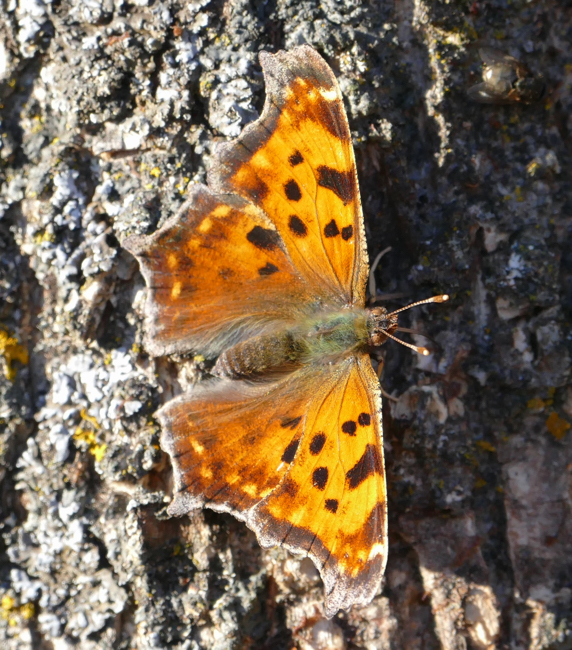 This mouse came to the bait one night. 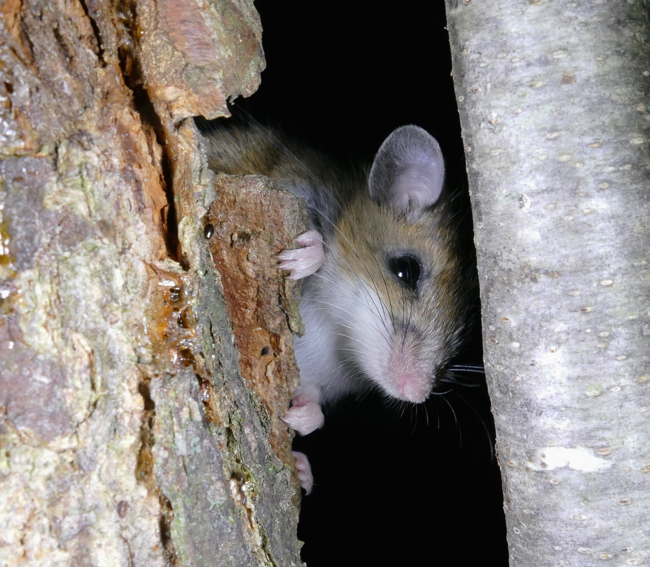 And I got a few moths too. 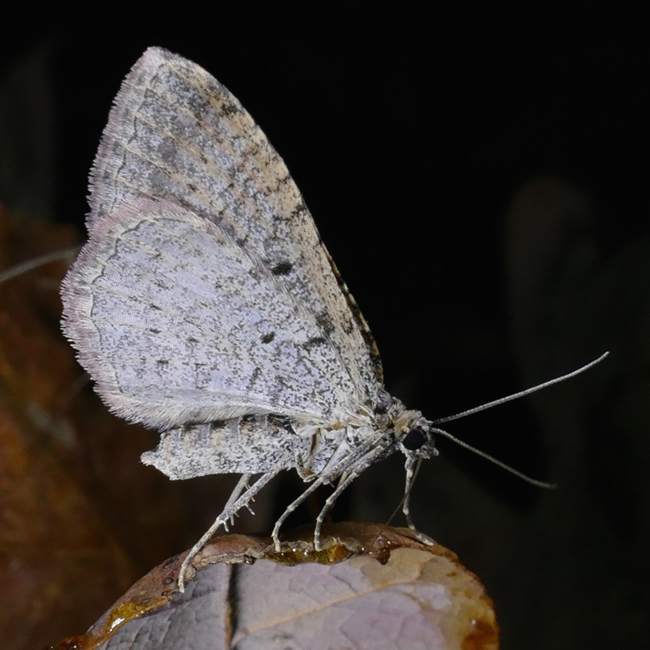 Pinion – I’m not sure which species 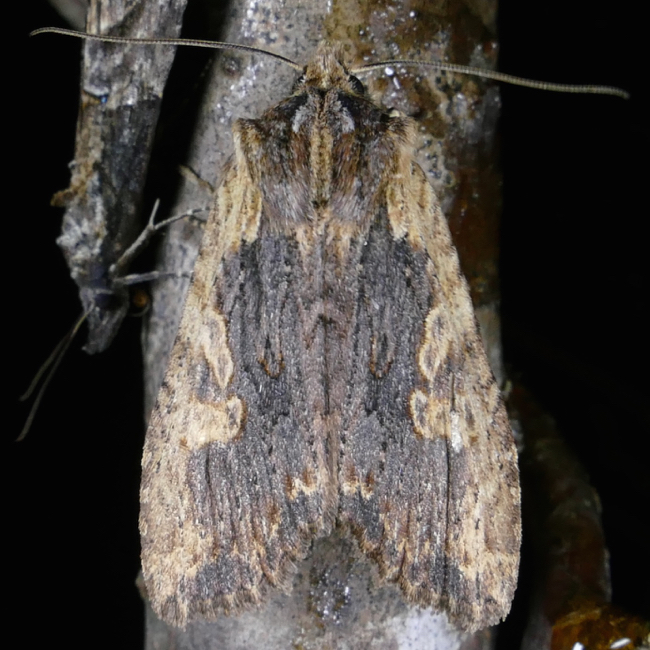 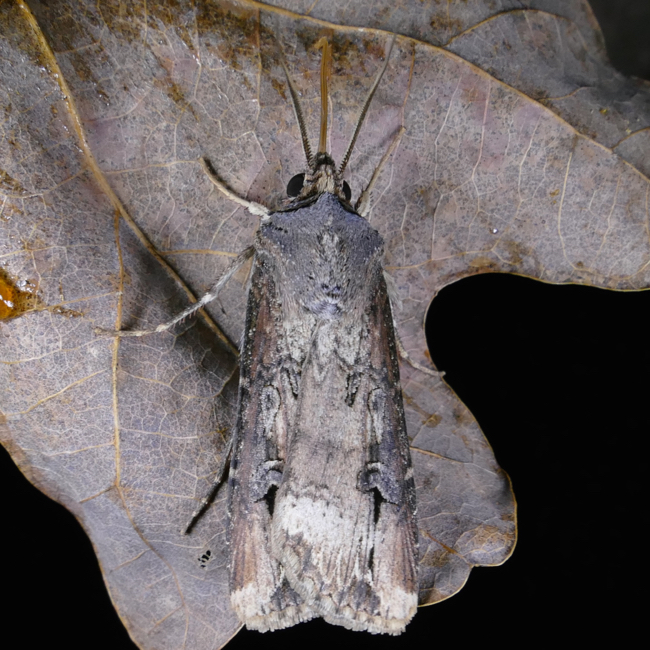 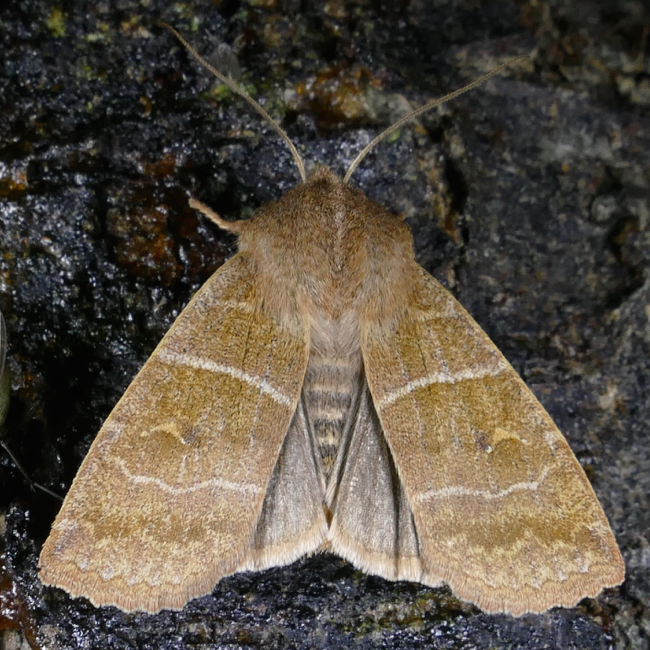 A few beautiful – and early – sunsets over the prairie 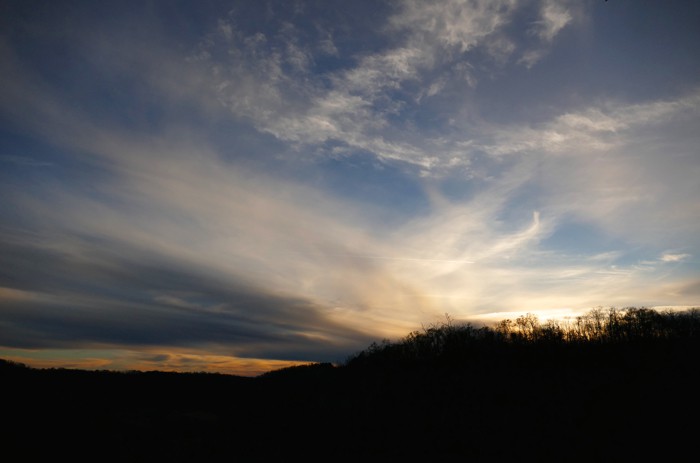 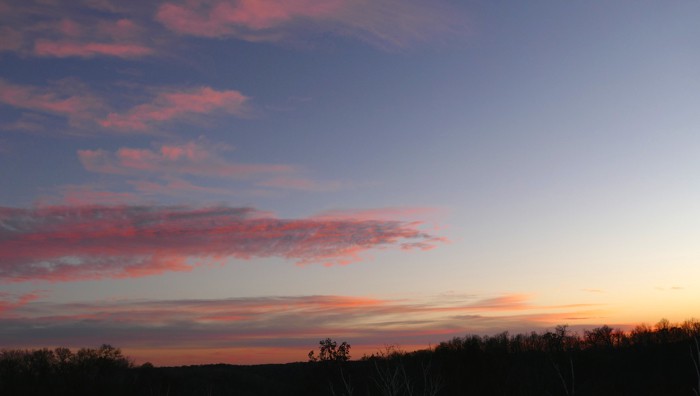