Aspen trees [Trembling Aspen (Populus tremuloides) and Big Toothed Aspen (Populus grandidentata)] grow in clones, with many trunks above ground but all coming from the same root system. This makes them more complicated to remove – if one of the trunks is cut, the roots send out suckers and make a forest of tiny new aspen trees.

An aspen clone at the edge of a planted prairie 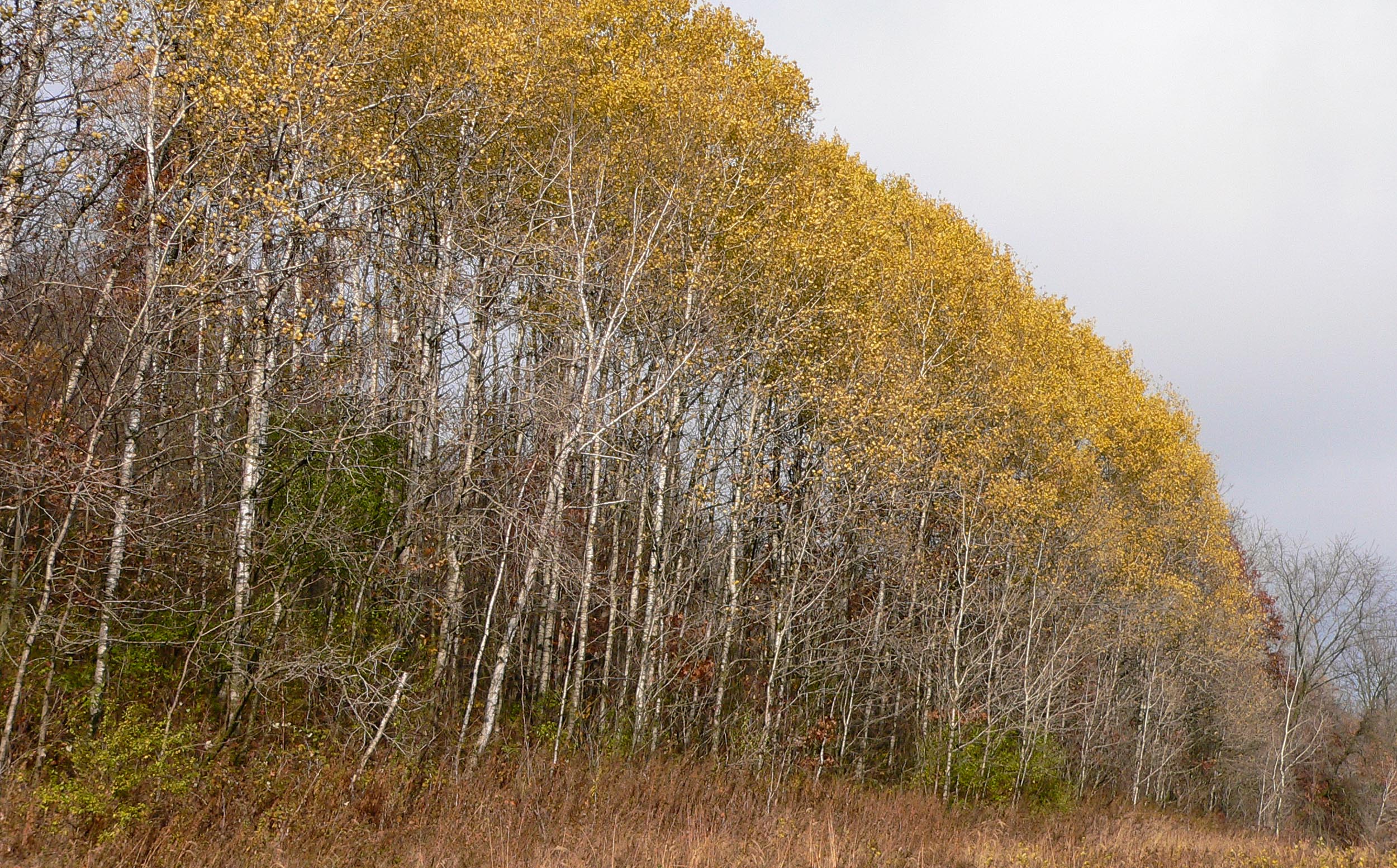 I don’t want to get rid of aspens – they’re native – but I’d like to keep them from taking over our prairies.

The best solution seems to be to cut off a strip of bark all around each trunk – this is called girdling.  If done correctly, it doesn’t trigger the plant to send up new shoots.  It allows the tree to bring up food from the roots, but not down from the leaves to the roots – so eventually the roots starve and the clone dies.   I’ve also girdled just some of the trunks in a clone, and that seems to work to contain the clone – the girdled trees die, the ungirdled ones continue to grow, but the clone doesn’t send up new shoots.

Aspen girdling should be done in May and June, when the bark splits apart easily.

To do the girdling, I use a draw knife 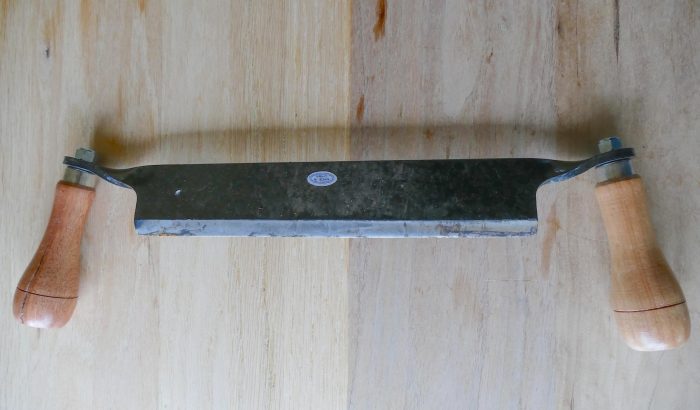 And a sturdy chisel.

The easiest trees to girdle are the small ones, with thin, smooth bark. First, I cut a vertical slice with the draw knife, deep enough to get to the part of the bark that wants to separate. I can tell when I’ve gotten to the right place because I can see a split between the bark and the smooth inner sapwood. 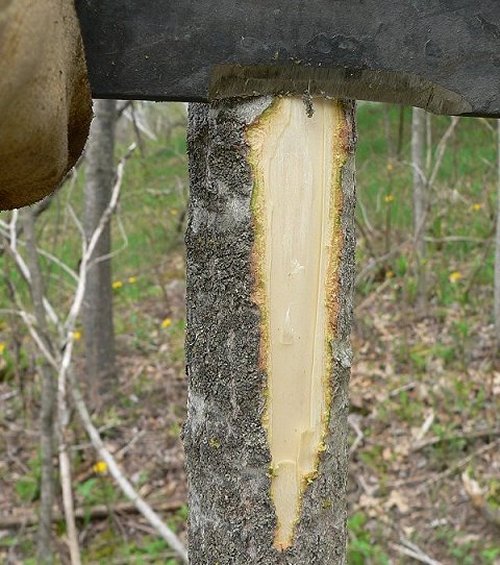 Then I stick the chisel into the split between the outer and inner layers. 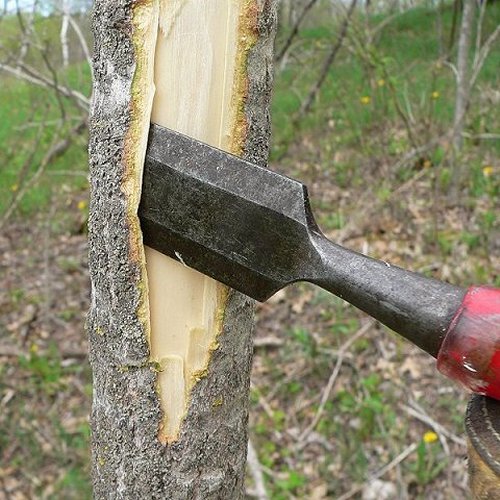 I push the chisel hard to split the bark and tear it away from the trunk. 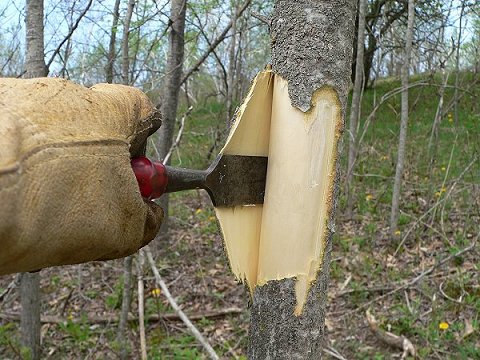 I move around the tree, tearing and pushing the bark as I go. The break in the bark only needs to be a few inches wide, but usually the bark tears farther than that, and makes a girdle at least 6 or 8 inches wide. 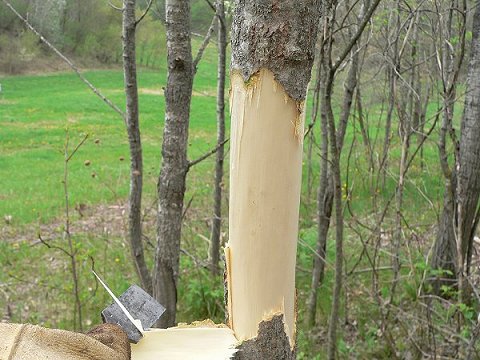 The most difficult trees are the largest ones, with thick furrowed bark.   I’m still working out how to best cut through that thick bark without cutting too deep.

Sometimes I use a small saw to cut a groove in the bark, starting from the opening made by the girdling tool and going all the rest of the way around the tree. 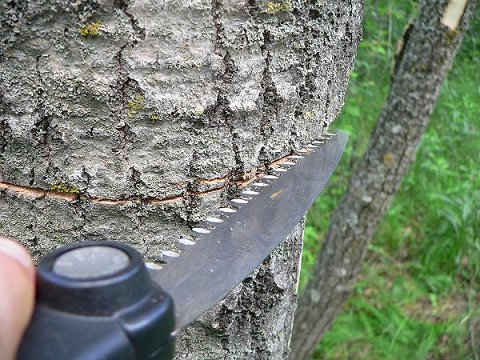 Then when I pry the bark, it splits along the sawed line. 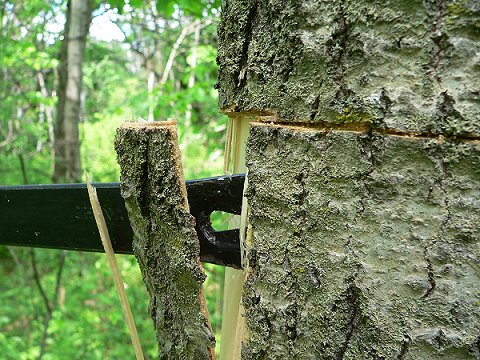 It takes the girdled trees a year or two to die, and another year or so to fall down. 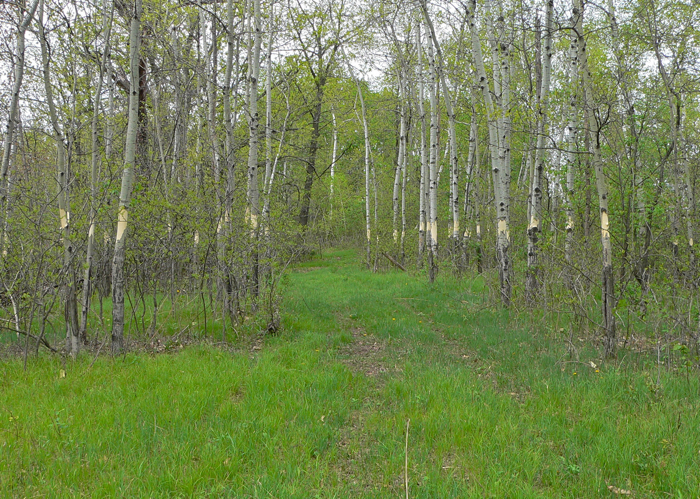 One year later – the aspens have died, but they haven’t fallen down yet.  The brush between the aspens is starting to get thicker because it’s getting more light. 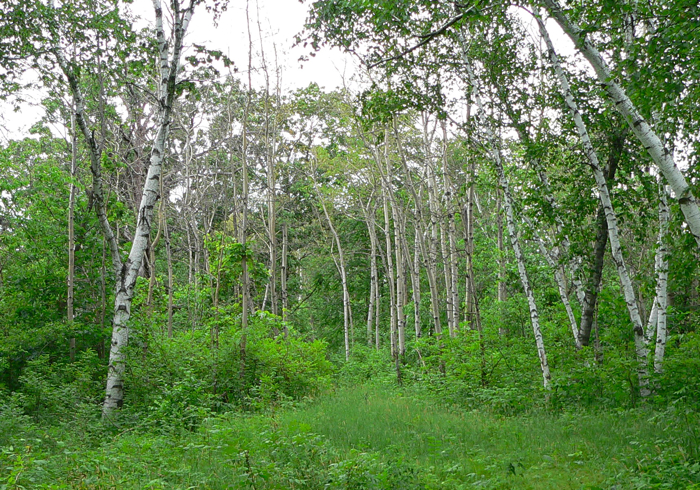 It takes a year or two for the trees to die, and during that time they’re extensively used by woodpeckers and other insect-eating birds. Eventually they fall down, we cut up the trunks, and pile them in brush piles. The piles are used by other small animals like rabbits and grouse, and then after a few years they melt away.

We’ve discovered that we can girdle other trees too, not just aspen.  Rather than cutting down large birches, Black Walnuts, and Basswood, now we girdle them and let them fall.  It’s much easier and safer to remove fallen trees than standing live trees.  Trees other than aspens will often sprout from below the girdle, or grow over the girdle, so I’ve learned to spray herbicide (20% Garlon 4 mixed with bark oil) into the fresh girdle.   That usually discourages re-sprouting.