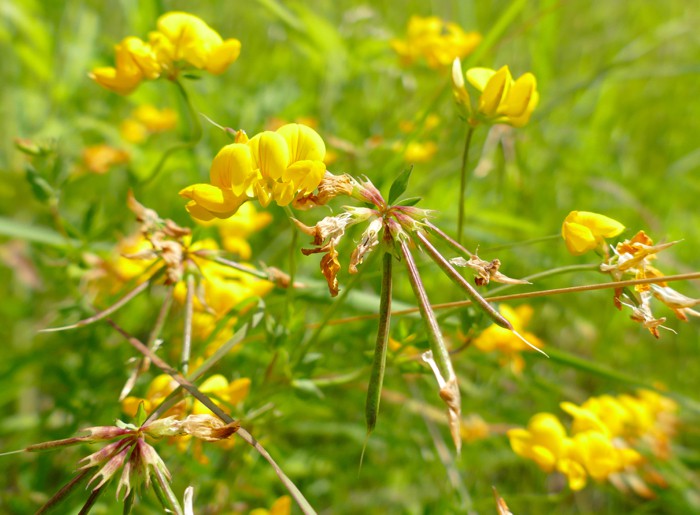 Birds Foot Trefoil is a legume which is native to Eurasia and North Africa, and is now an invasive weed in the Midwestern U.S.  It’s especially a problem in prairie restorations because it spreads quickly, and seed germination is increased by fire. It was introduced here as forage for cows and for erosion control along roadsides.  It is still possible to purchase seeds – please don’t! – and it’s often advertised as a ‘wildflower’.

Birds Foot Trefoil is especially a problem in the weedier parts of our wetland, but we also find it in some of the upper planted prairies.  I’ve been so busy with other invasives that I haven’t paid much attention to it until the last few years.   Many of the plants I find in the drier prairies are along the mowed paths, and I suspect the seeds were moved by the mower.  Now I’m trying to reduce the numbers of plants along the paths and the driveway so we won’t continue to spread it.

This is the way it looks growing in the wetland. 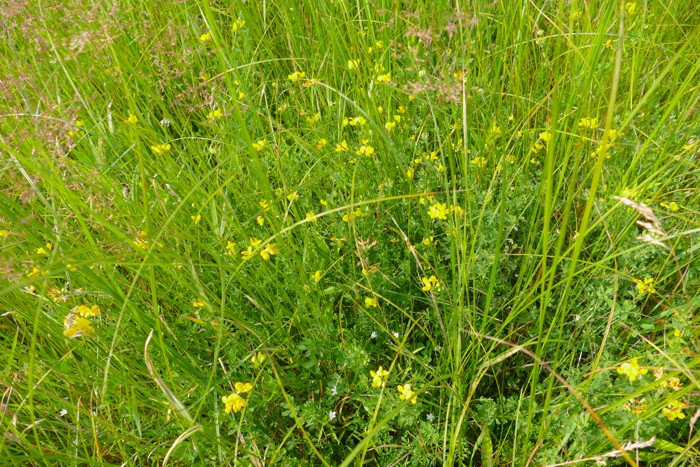 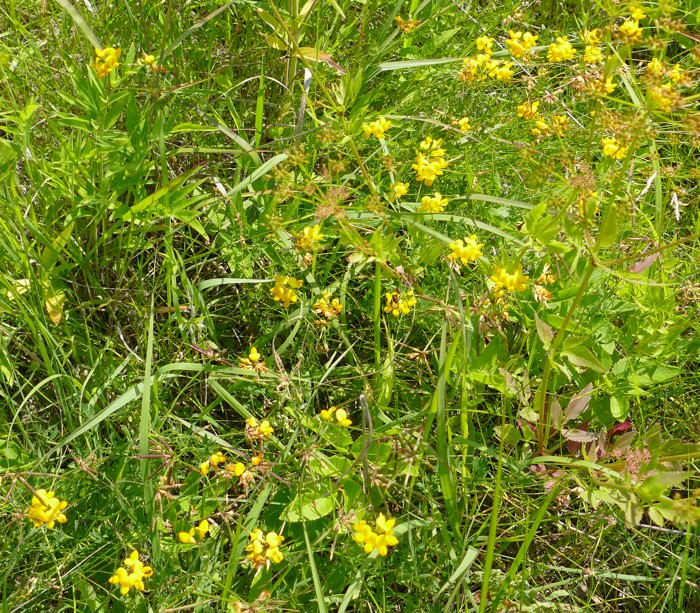 A closeup of the flowers 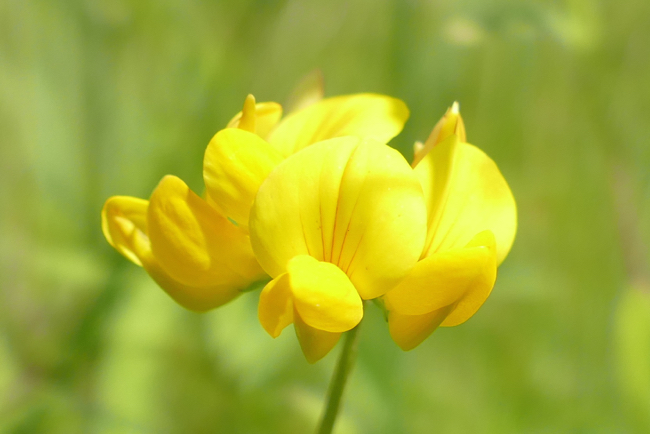 And the seed pods.  This is probably where the name comes from – the arrangement and shape of the pods look like a bird’s foot. 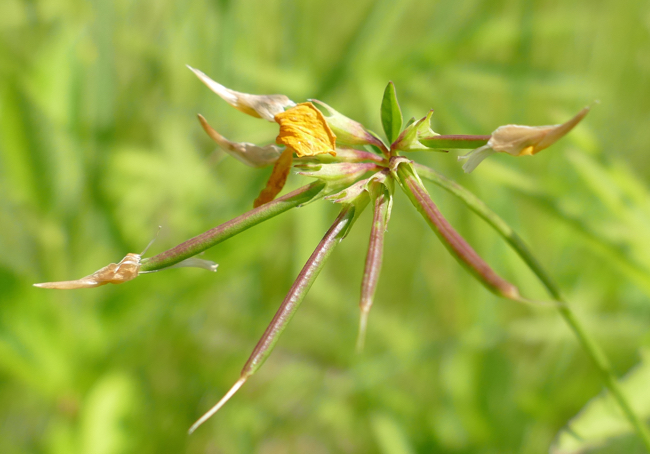 I’ve found two ways of treating it which seem to work pretty well.

This is a procedure that  was developed by Tom Brock, but I’ve slightly modified his technique.  Each plant grows from a central tap root.  Especially in older, larger plants there are many long stems, all coming from this one tap root – it’s sometimes amazing to find out that a whole huge clump is all one plant.  If I follow the stems back, I find that they all come from the same central spot in the ground. 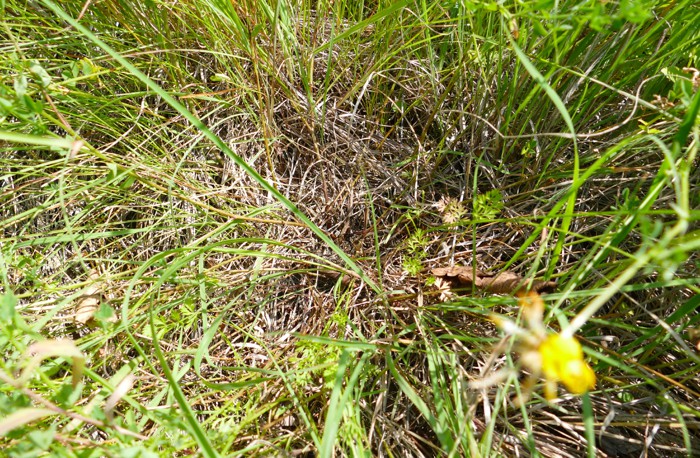 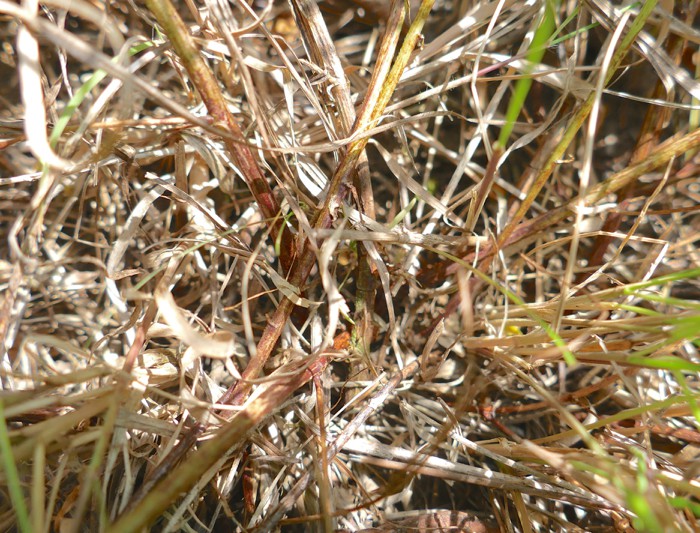 It’s easy, and fast, and there’s no damage to nearby plants.  But it takes the plant a week or so to die.  During that time I may not remember that I’ve already sprayed it, and the flowers still have the ability to make seeds.

So after I spray the center, I cut off and remove all the stems that come from that center.  It makes the project take longer, but it keeps any flowers and seeds from being a problem, and I know that that plant has been sprayed.  It also uncovers other nearby plants that may have been covered by the foliage from the bigger plant, and I can treat them too.

Sometimes the plants are so mixed together, or have been mowed so often, that it’s difficult to find their centers.  Or there are so many small plants that it’s hard to find them all.  In that case I use a foliar spray method.

Milestone is an herbicide that’s effective on plants in the Legume and Sunflower families.  It doesn’t affect grasses, and doesn’t seem to bother many plants in other families.  I use a mix of 1/4 oz Milestone + 1 oz non-ionic surfactant in 1 gallon of water.

This mixture works very quickly – I usually see the plants wilting after one day, although it takes them longer to die completely.

I’m still in the first few years of trying to get rid of this plant, but I’m hopeful that these methods will eventually allow me to eliminate it from the farm.

Here are some related references: