This is the very end of the blooming season, so most of the flowers blooming now are purple and white asters. END_OF_DOCUMENT_TOKEN_TO_BE_REPLACED

The fall ladybugs have arrived. Asian Lady Beetles (Harmonia axyridis) spend most of the year eating aphids on plants and shrubs. Sometime around the first week in October they leave the plants and start looking for protected places to spend the winter. END_OF_DOCUMENT_TOKEN_TO_BE_REPLACED

I’ve been collecting and processing seeds as fast as I can. There are piles of drying seeds in nearly every room in the house and I’m running out of space to put them. END_OF_DOCUMENT_TOKEN_TO_BE_REPLACED

This was another week when it seemed to change from summer into fall overnight. It was very warm for a few days with a strong south wind, then we had 2.5 inches of rain one night, and the next day the temperature started falling. We had to wear jackets and headbands for the first time this fall. END_OF_DOCUMENT_TOKEN_TO_BE_REPLACED

The weather has finally turned colder – this week we had the early September cold snap that always brings rain and cold winds at the end of summer.

We managed to get some sumac cut before the rain came. We widened the area on Sumac Prairie so now we can see it pretty well from the road.

Here’s the place that we’ve cleared of sumac. 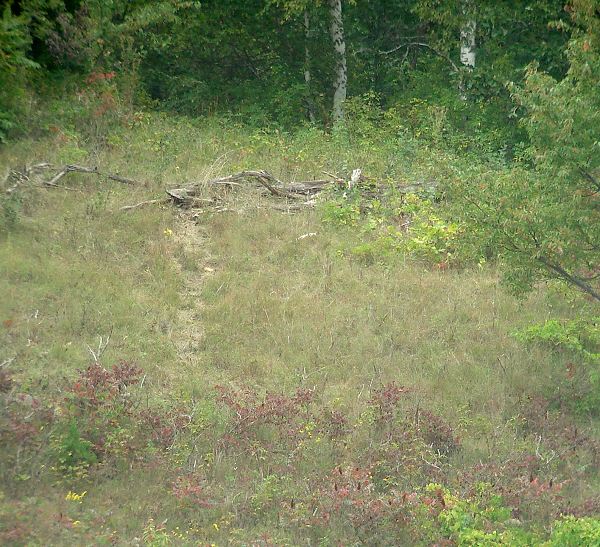 And here’s the same area from farther away – it’s the tiny lighter green area near the top. It looks pretty small from this far away! 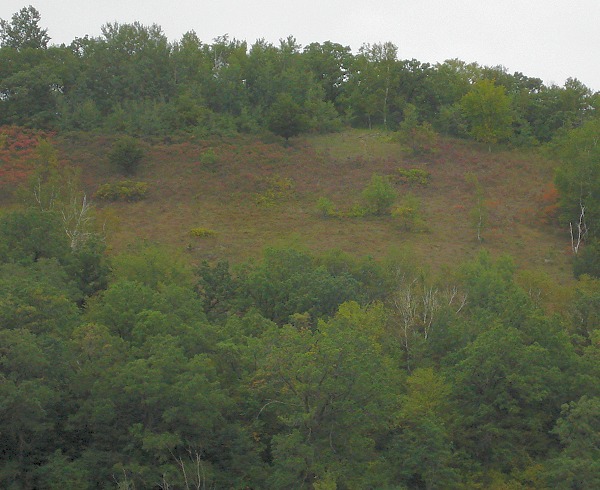 I do like sumac – I just wish there wasn’t so much of it. It turns beautiful colors in the fall. Here are some of the plants on Sumac Prairie that we haven’t gotten to yet. 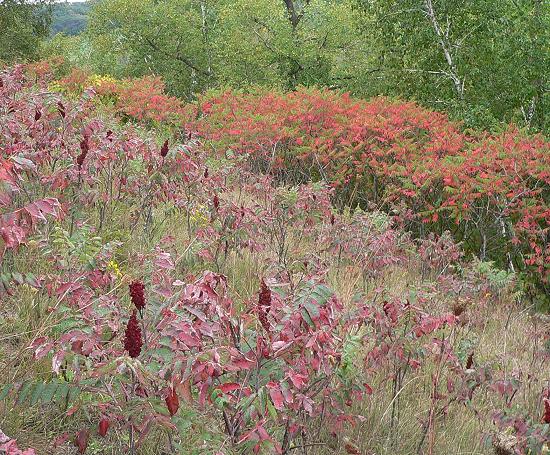 The lower part of Sumac Prairie doesn’t have much sumac, so it’s easier to see the flowers. Gray Goldenrod (Solidago nemoralis) is blooming now. 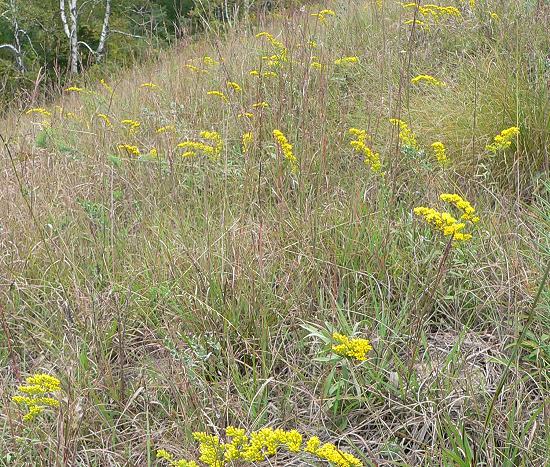 And I found one plant of Great Plains Ladies Tresses (Spiranthes magnicamporum) blooming. I’ve found it on some of the other remnants, but never on Sumac Prairie before.

The edges of the flowers are crinkled and almost clear. 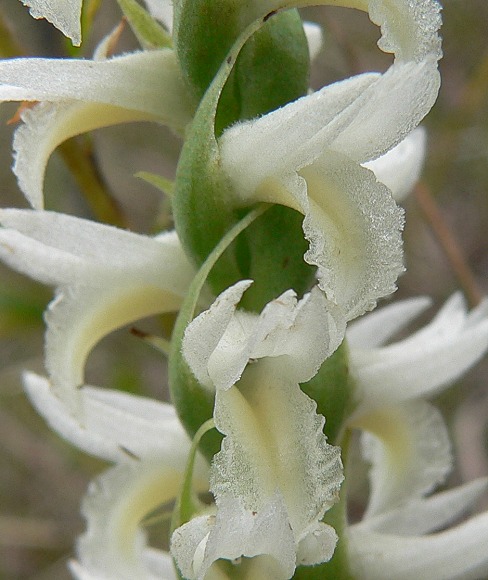 We found another Catocala Moth on the edge of the road – blending in with the road colors. 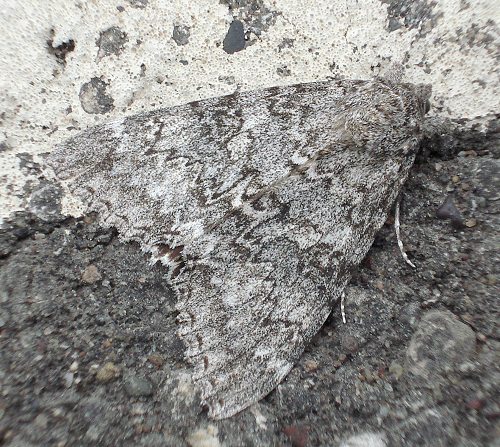 I tried Margot’s idea of lifting the outer wings to see the bright wings underneath. We got a few pictures, but the moth was disturbed enough that it eventually flew away into the wetland. 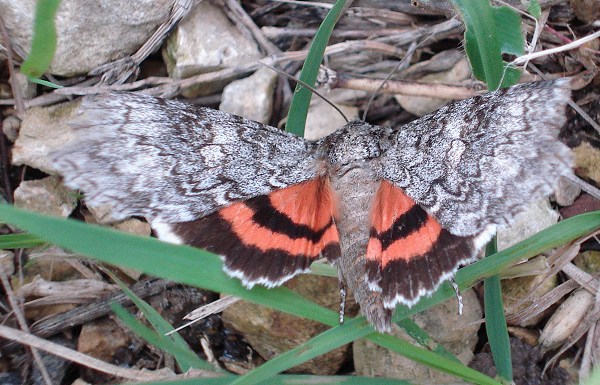 I think it’s Catocala unijuga, or the Once-married Underwing. (Apparently Linnaeus named a few Catocala species using a marriage theme, and later scientists followed his lead, so now many of the Underwings have names related to marriage.)

One morning we woke up to see two fawns outside our windows. The house is like a large blind, so we see all kinds of wildlife – but they’re not often this close. 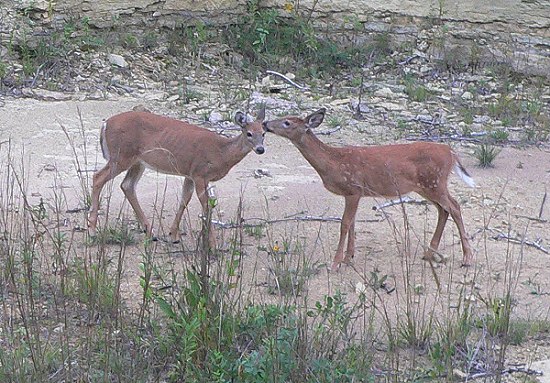 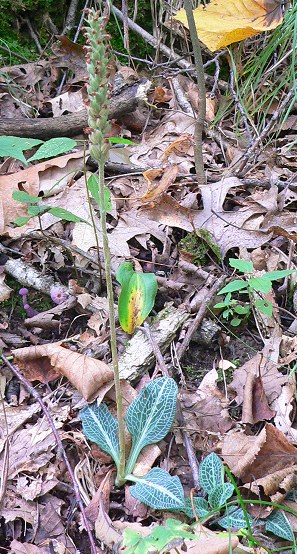 All the late flowers are blooming now. The Fringed Gentians (Gentianopsis crinita) are just starting to bloom – they were a little slowed down by the cold wet weather, so the buds are still closed. 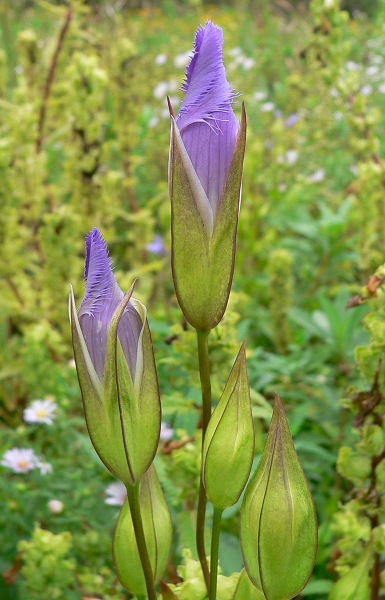 I like the way the petals curl around each other. 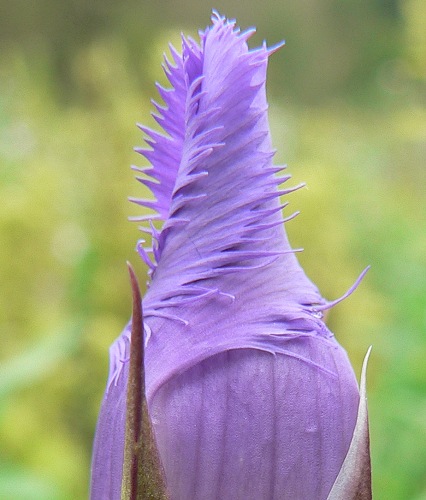 The Bottle Gentians are blooming – with lots of color variation between different plants. Some are very blue and some are shades of purple. They look especially bright in dark, wet weather. 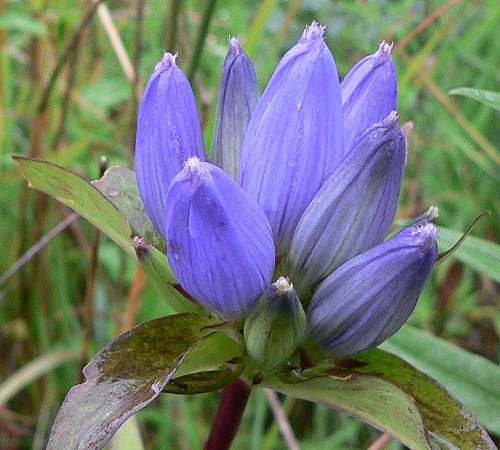 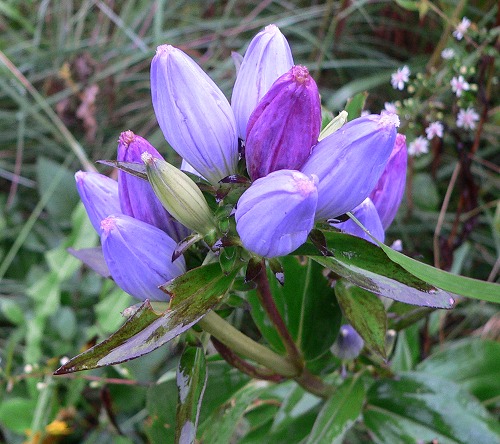 I walked up Hidden Oaks Point in the rain and noticed lots of prairie plants coming up where we cleared trees and brush last year. There’s lots of Old Field Balsam (Gnaphalium obtusifolium). It’s also called Cat’s Foot, Rabbit’s Tobacco, and Cudweed. My favorite name is “Sweet Everlasting” because the plants leave a sweet spicy smell on my hands when I’m collecting the seeds. 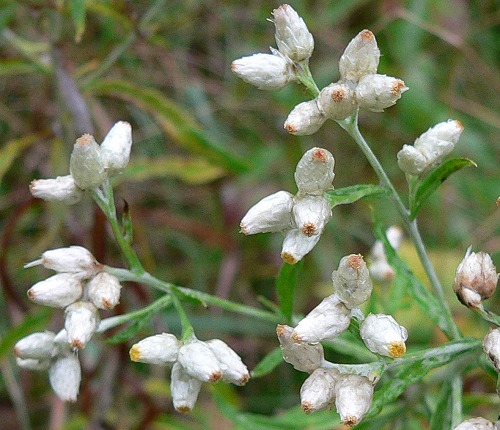 Here’s a collection of photos of the asters that are blooming now. 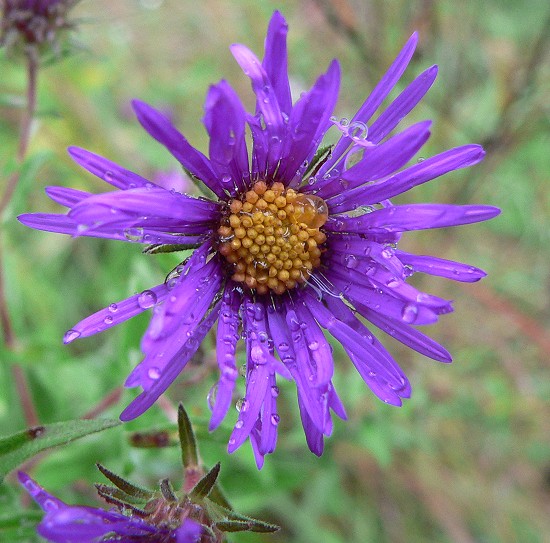 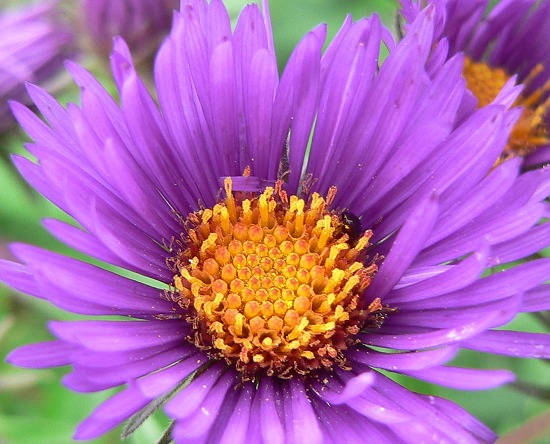 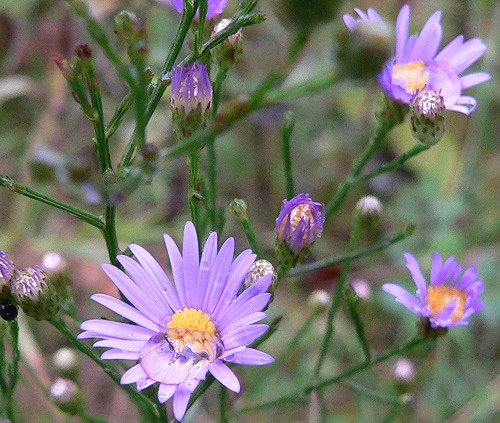 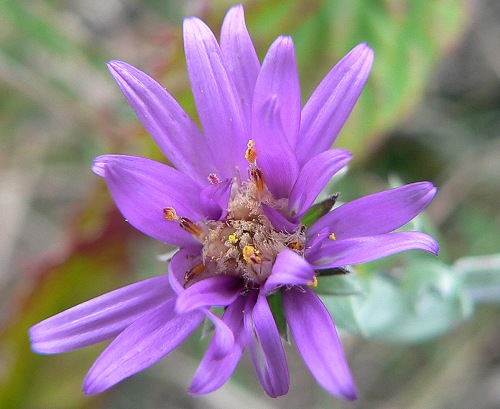 And here’s a new plant for the inventory: Elm-leaved Goldenrod (Solidago ulmifolia). It’s a slender goldenrod that grows in woods. 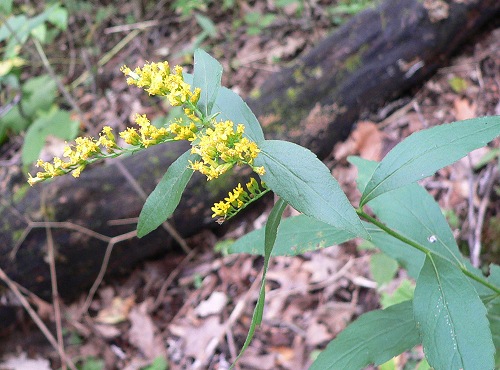 I took a long walk in the rain up to the Narrows Prairie. We call it the Narrows because it’s on a very narrow part of the ridge with steep slopes on both the north and south sides. When the weather is wet, and the clouds are low, clouds slide right across the narrow top of the ridge. 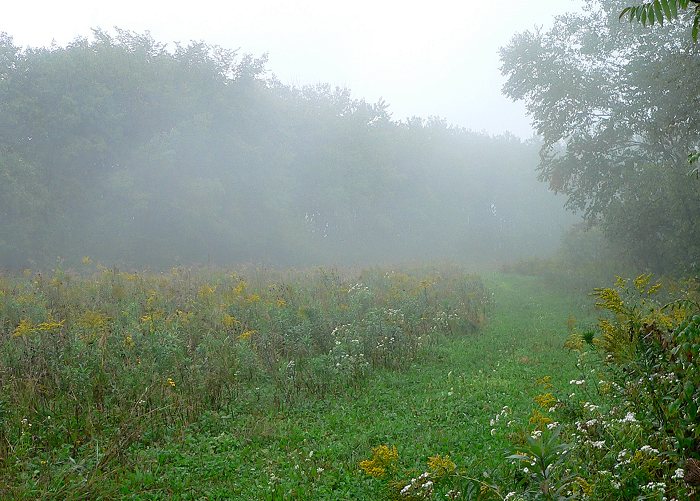 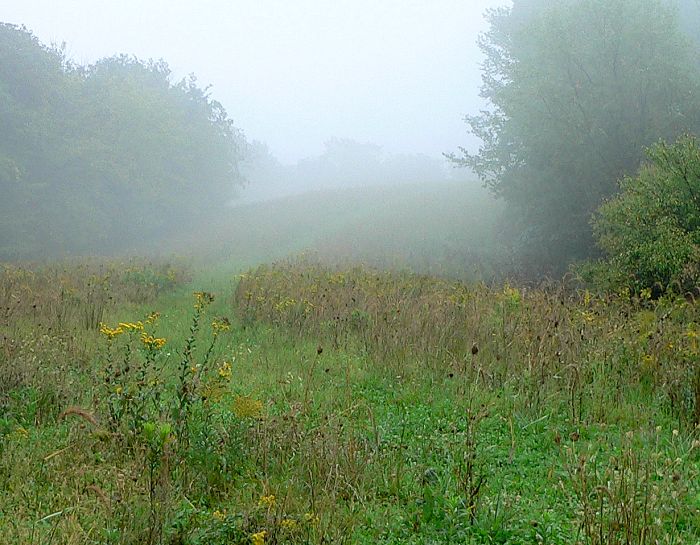 This is the time of year when I collect the seeds for our winter plantings. This year I’m collecting for the 19 acre prairie planting – the middle third of Western Prairie – and also for a large wetland area that we’ve been clearing and spraying. On one of my collecting trips last week I stopped at a dry sand prairie north of the farm and found several hundred Monarchs nectaring in some large patches of Whorled Milkweed. END_OF_DOCUMENT_TOKEN_TO_BE_REPLACED

We finally got enough rain to fill up the frog pond – I’ve been waiting since last fall for it to fill with enough water that it would cover the plastic liner. We had 4 ½ inches of rain last week – 4 inches of it in one night – and the pond finally looks like a pond instead of a puddle.

END_OF_DOCUMENT_TOKEN_TO_BE_REPLACED

Fishers are large weasels that normally live in more northern areas, including northern Wisconsin. I haven’t found any literature saying that they are found in western Wisconsin, but I’ve heard several stories of Fishers in this area. Our friend Dan, down the road, has seen a Fisher on his land, and a biologist friend once saw one on our land. Now that Mike has seen one we’ll add it to our inventory. END_OF_DOCUMENT_TOKEN_TO_BE_REPLACED

This was another good butterfly week. The weather was a little cooler so it was easier to be outside and there were more butterflies out in the open. When it gets very hot the butterflies hide in shady places and it’s difficult to find them. END_OF_DOCUMENT_TOKEN_TO_BE_REPLACED

This has been a good week for moths and butterflies in St. Paul. END_OF_DOCUMENT_TOKEN_TO_BE_REPLACED