Queen Anne’s Lace, or Wild Carrot, is a biennial in the Umbelliferae – the carrot family.   It’s native to temperate Europe and Asia, and was bred for a larger and more edible root, which became the domestic carrot.

Queen Anne’s Lace has been in America for such a long time that many people think of it as a weedy native.  It grows along roadsides, the edges of fields, and other disturbed places.  The flower is white and lacy, often with one small dark red blossom in the center. 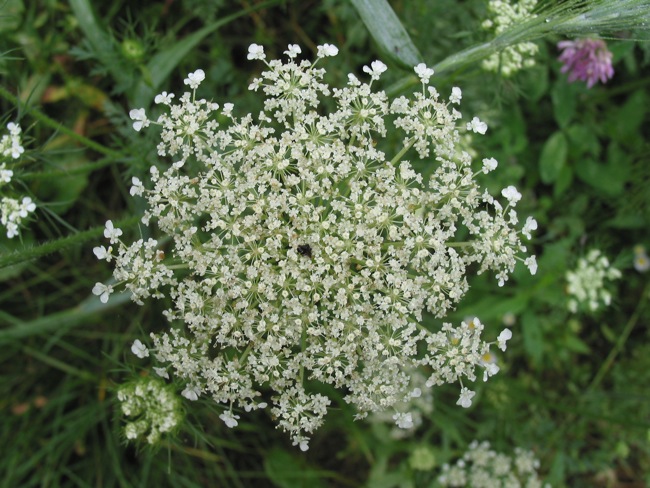 Queen Anne’s Lace is a weed in all our planted prairies.  It was kept under control when the fields were cultivated, but after we planted the prairies, and stopped spraying with herbicides, the seeds in the soil sprouted.  This is the Narrows Prairie, five years after we planted it. 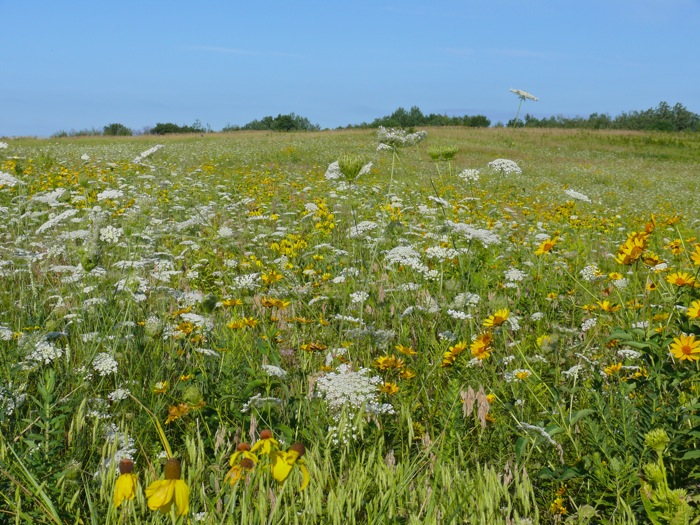 The flowers are very attractive to all kinds of insects. 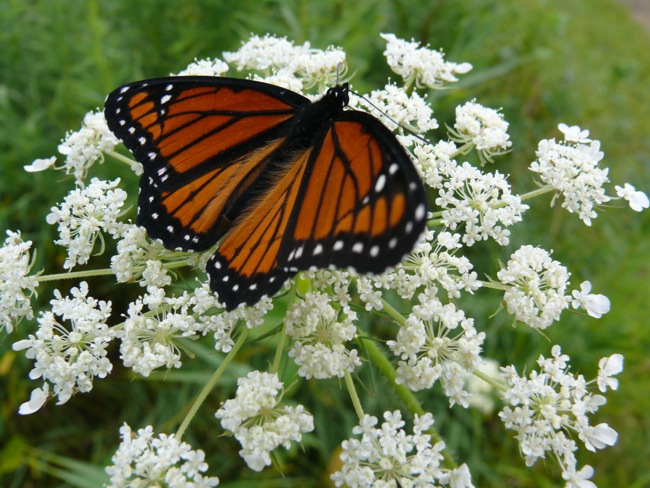 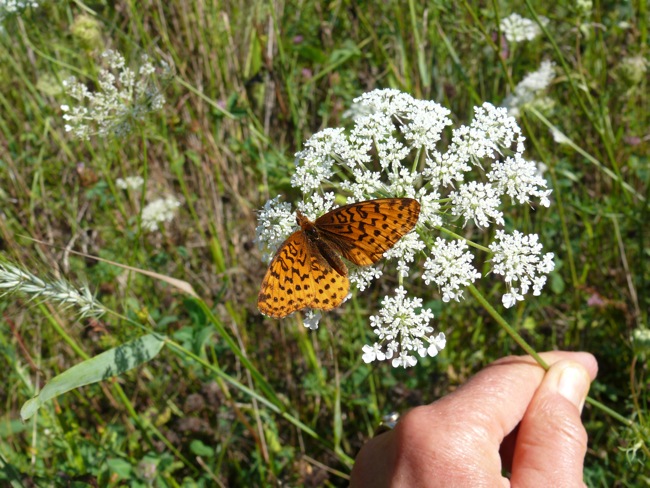 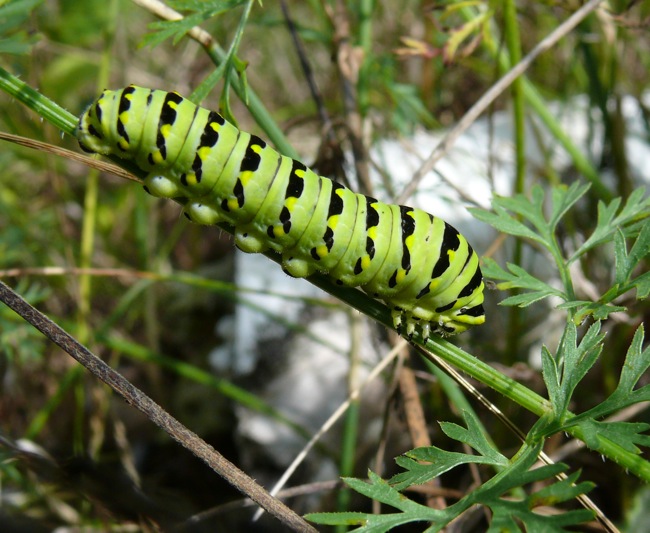 I wish I could get rid of all the Queen Anne’s Lace, but it just isn’t possible – there’s too much of it.  I do try to get it out of our remnants.  I usually do that by pulling the plants when they’re flowering, and removing them to the compost pile. This sounds crazy – it’s a lot of work – but if the area isn’t too big, and has lots of natives, it’s worth it.  And it’s fun to spend time really looking at the prairie plants.

This is Hidden Oaks Meadow – a small remnant that had a flourishing population of Queen Anne’s Lace. 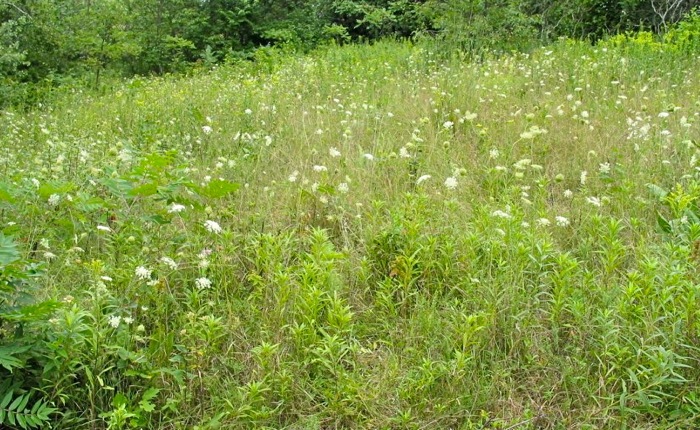 I spent a few days weeding it – and this was the result. 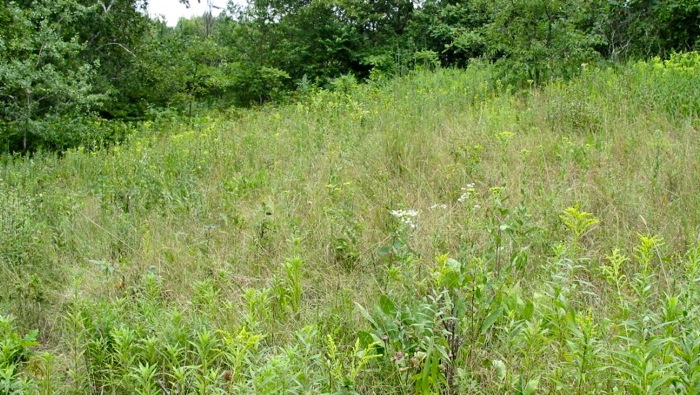 Since I removed the source of seeds, the number of Queen Anne’s Lace plants the following year was much lower, and it took much less time to weed them.

This is a larger remnant that I weeded – the Knife Edge Prairie.  (I continue to keep both these areas weeded for Queen Anne’s Lace, and it takes less time every year.) 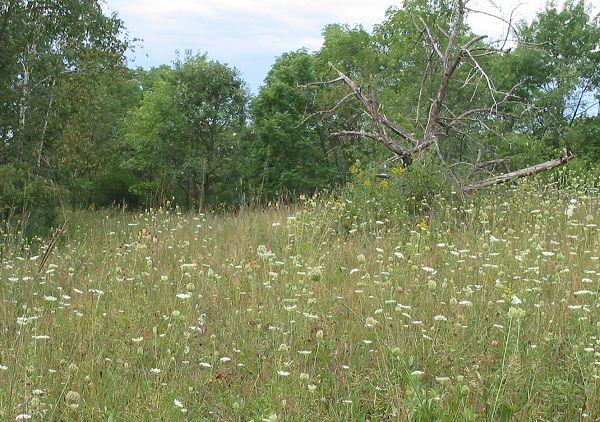 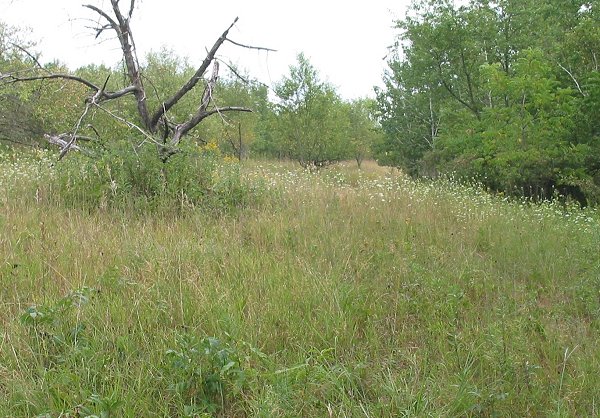 And finished….all the Queen Anne’s Lace is gone. 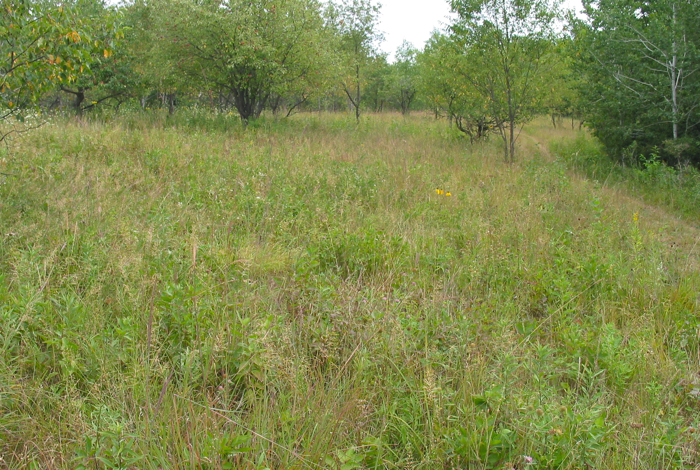 Queen Anne’s Lace is mostly a problem for the first two years after mowing a prairie.  It seems to thrive on disturbance.  It may be that the seeds don’t germinate as well when they’re shaded by prairie plants.

The only other control solution I’ve found is frequent mowing, targeted to their flowering cycle.  We mow two or three times – once just after flowering, and again a few weeks later – for two seasons in a row.  This doesn’t completely get rid of the them, but it does cut down on the number of plants.  I’ve used this method in planted prairies, where mowing for the first few years is a good idea anyway.