This year we tried burning part of the prairie.  The only burns we’d done before were very small patches with snow all around them.  So we didn’t plan this one very well.   It wasn’t a ‘controlled burn’ – it wasn’t at all under control!  It was in mid-February, when there was still snow in the woods, so it seemed like it would be fairly safe. But we were wearing the wrong clothes (polar fleece jackets and gloves – very flammable), the wrong shoes (cheap plastic boots), and we didn’t have any way to put it out.

Also, it was a day with gusty winds that kept changing direction.

We started the fire at the top of the slope – our only good decision.  (Fire burns down much more slowly than it burns up.)  It took off!  When the wind died down it would slow down, but when a gust came it would flare up and burn harder and move in all directions.  Mike was loving it, but I was worried that the flames would catch the tree branches.

The wooden bench that Mike had built was above the fire, and we suddenly realized that the fire was burning toward it.  We tried to move the bench, but it was frozen into the ground.  So we started stamping the fire out with our feet.  That worked pretty well, except that our feet got very hot.  And just at the end, when the rest of the fire was out, the last bit of the fire found a juniper bush, and flamed up again.  That was something we couldn’t put out, so we stood around it and waited until it had finished burning.

So all was well, but we learned a lesson – we have to be a little better prepared if we’re going to burn.

The area that got burned was most of the south-east facing slope of the prairie. 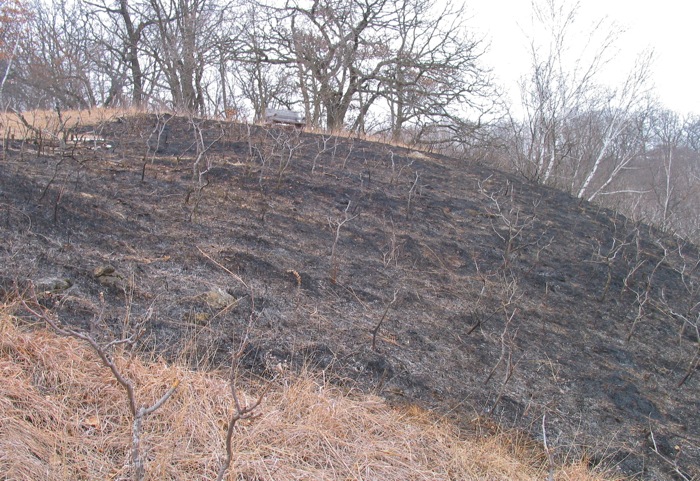 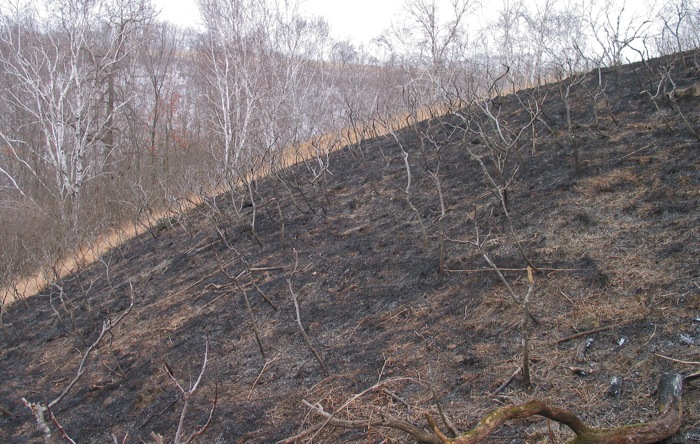 Here’s a series of photos of the burn area over the spring and summer. 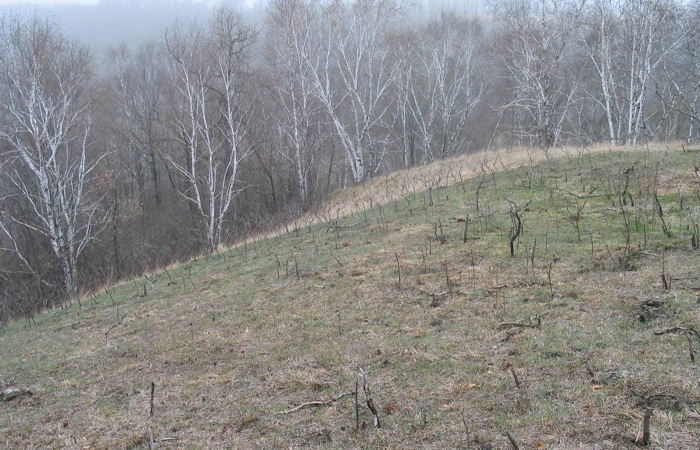 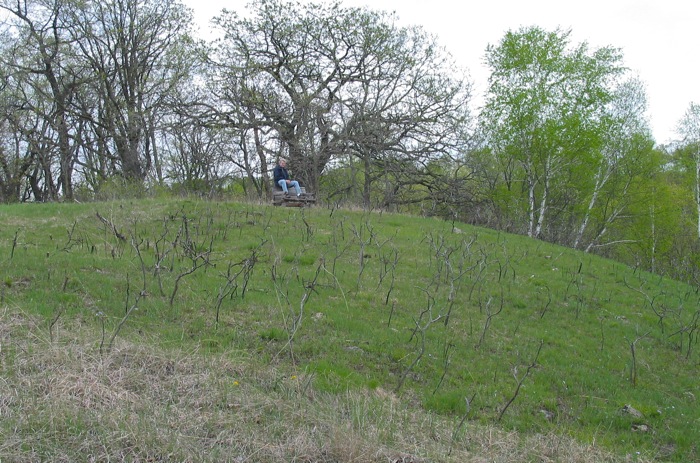 6/15/2003   Still plenty of sumac, although the fire seems to have top killed the larger plants 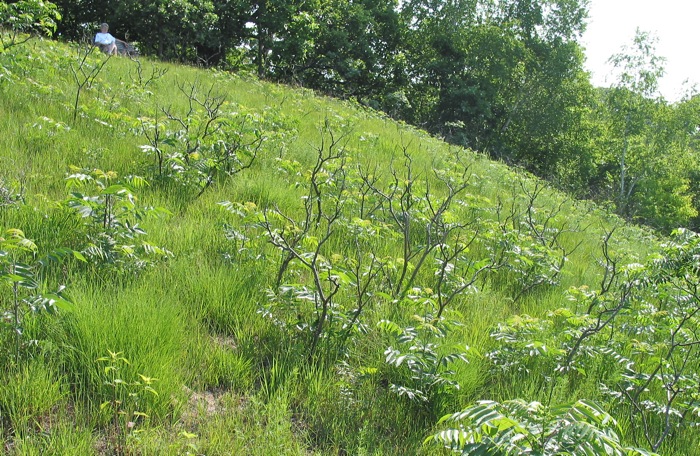 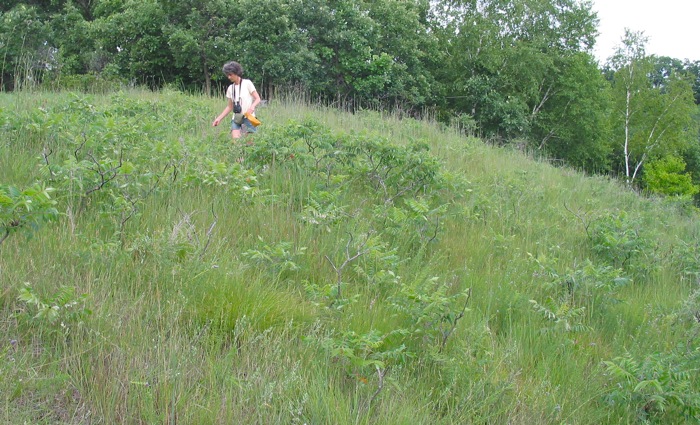 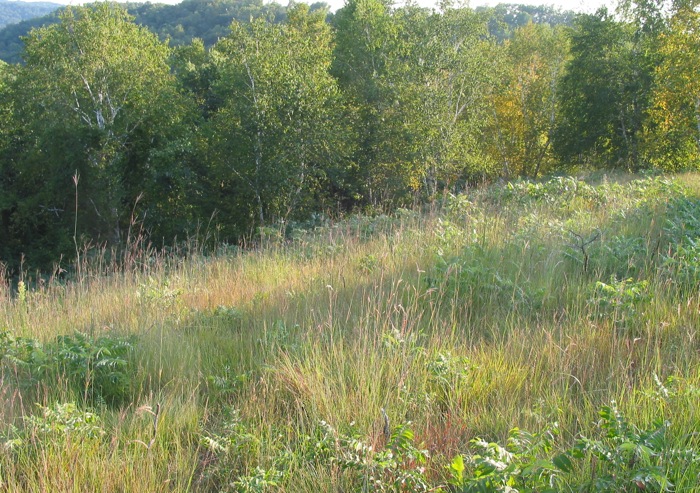 Overall, this summer, the burned area grew taller – mostly because of the Big Bluestem – than the unburned area.  Purple Prairie Clover bloomed more than usual.  The sumac was top killed, but sprouted again, and at the end of the summer covered about the same area as before the burn.

10/10/2003  The point, not including the burned area – showing the wonderful view we have from up there. 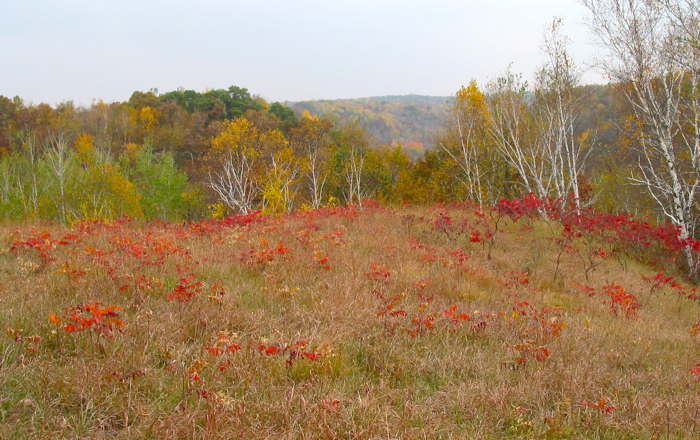 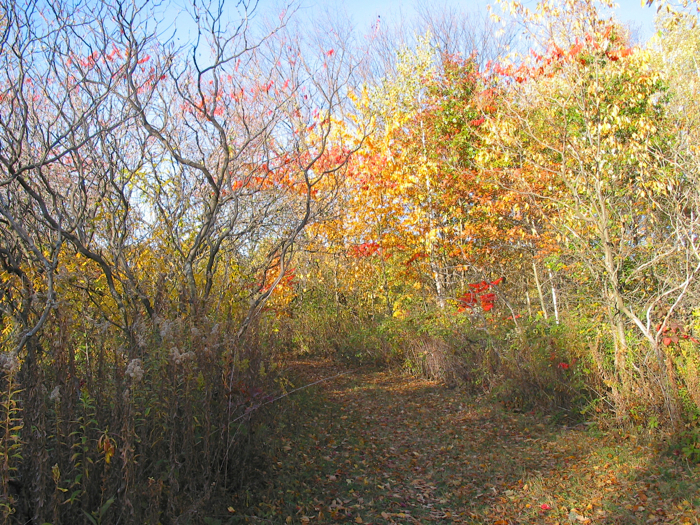 In the fall we started clearing the point that leads down to 3 Finger Valley.  The point has lots of prairie/savanna plants, but it’s covered with brush and trees that are so thick that it’s difficult to walk through.

11/1/2003  We cut some birches and mowed raspberries and prickly ash at the base of the point. 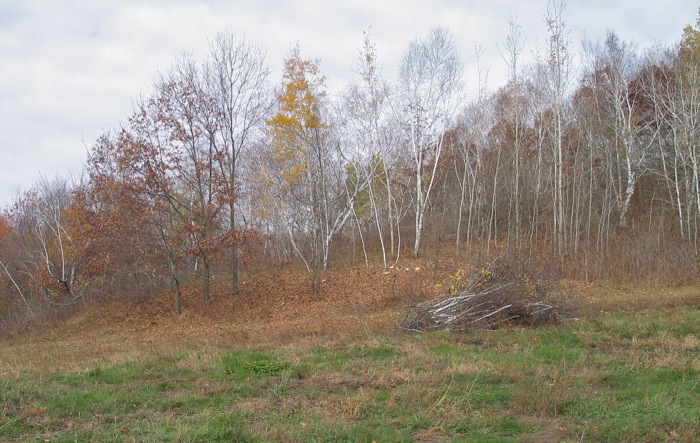 11/1/2003   This is the view of the point from 3 Finger Valley.  There’s a large grove of aspen and many birches that has grown up into the savanna area.  We’re hoping to eventually to clear it all. 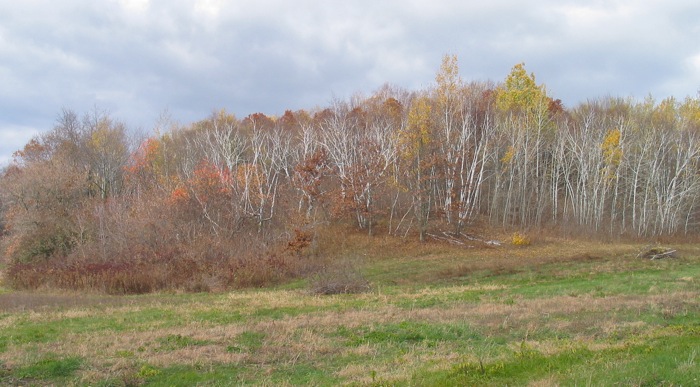 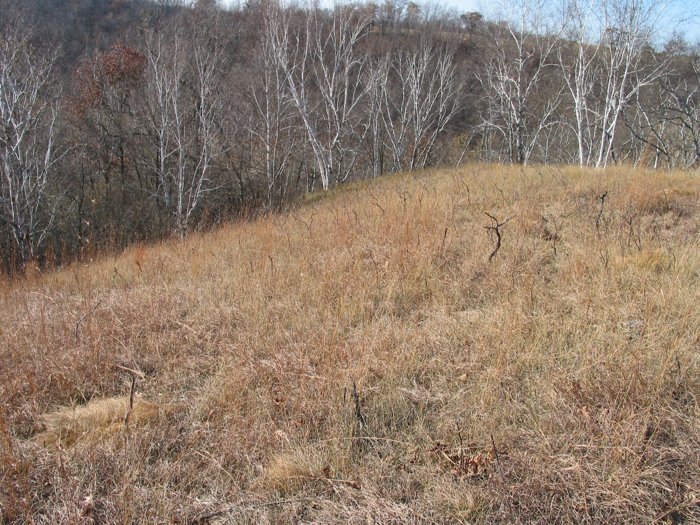