We have one larger (2-3 acres) mesic prairie, one smaller one, and many small sunny prairie openings, most surrounded by overgrown savanna.  None of these places was ever plowed, but they were probably all grazed by cows for many years.  This is the story of the largest of these prairies – The Knife Edge Prairie –  what we’ve done there, and how it’s changed.

We first discovered that this area was prairie in one of the first years we were there – I think in 2000. We mowed a path through it, and realized that except for numerous small trees – mostly apple and black cherry – and lots of brushy undergrowth, it had lots of prairie vegetation.   This is the way it looked after mowing that first path. 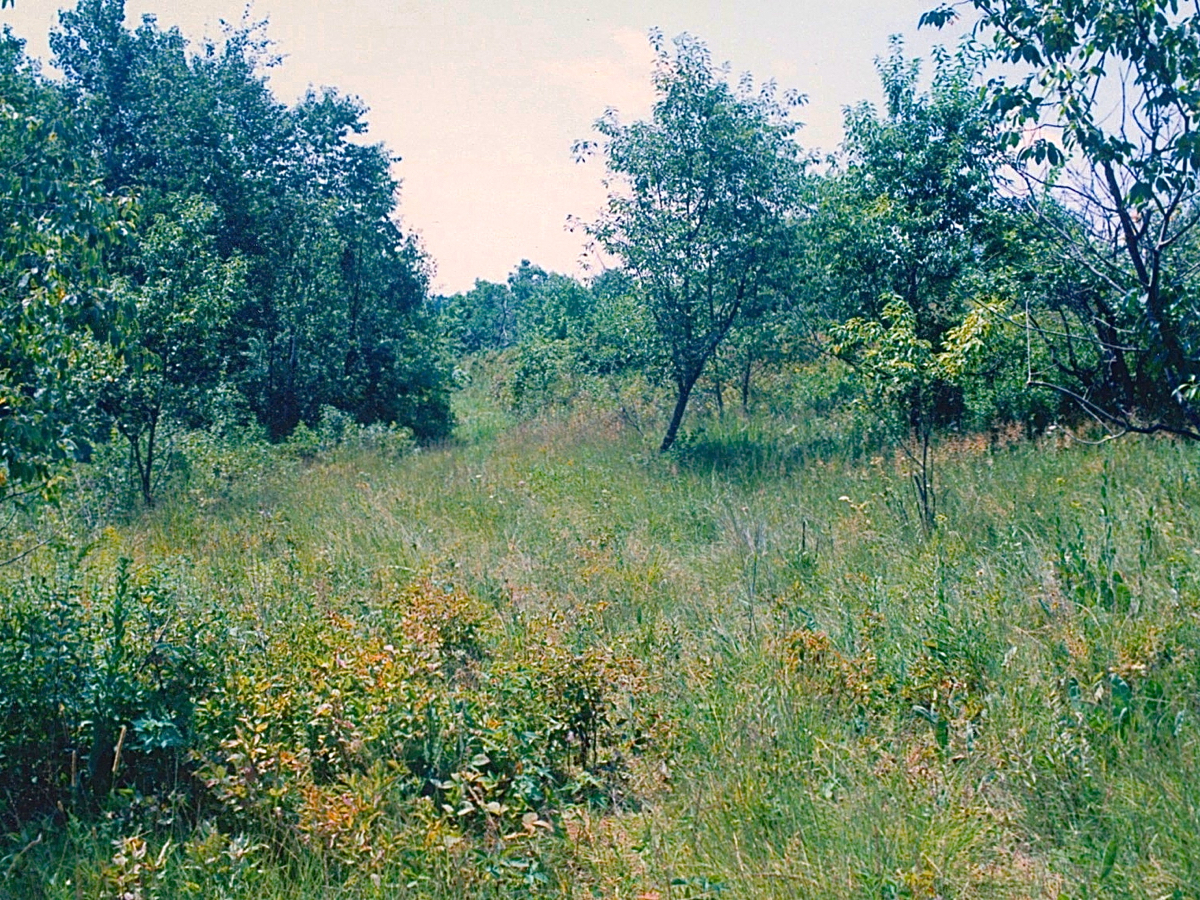 For many years we just mowed it every spring. 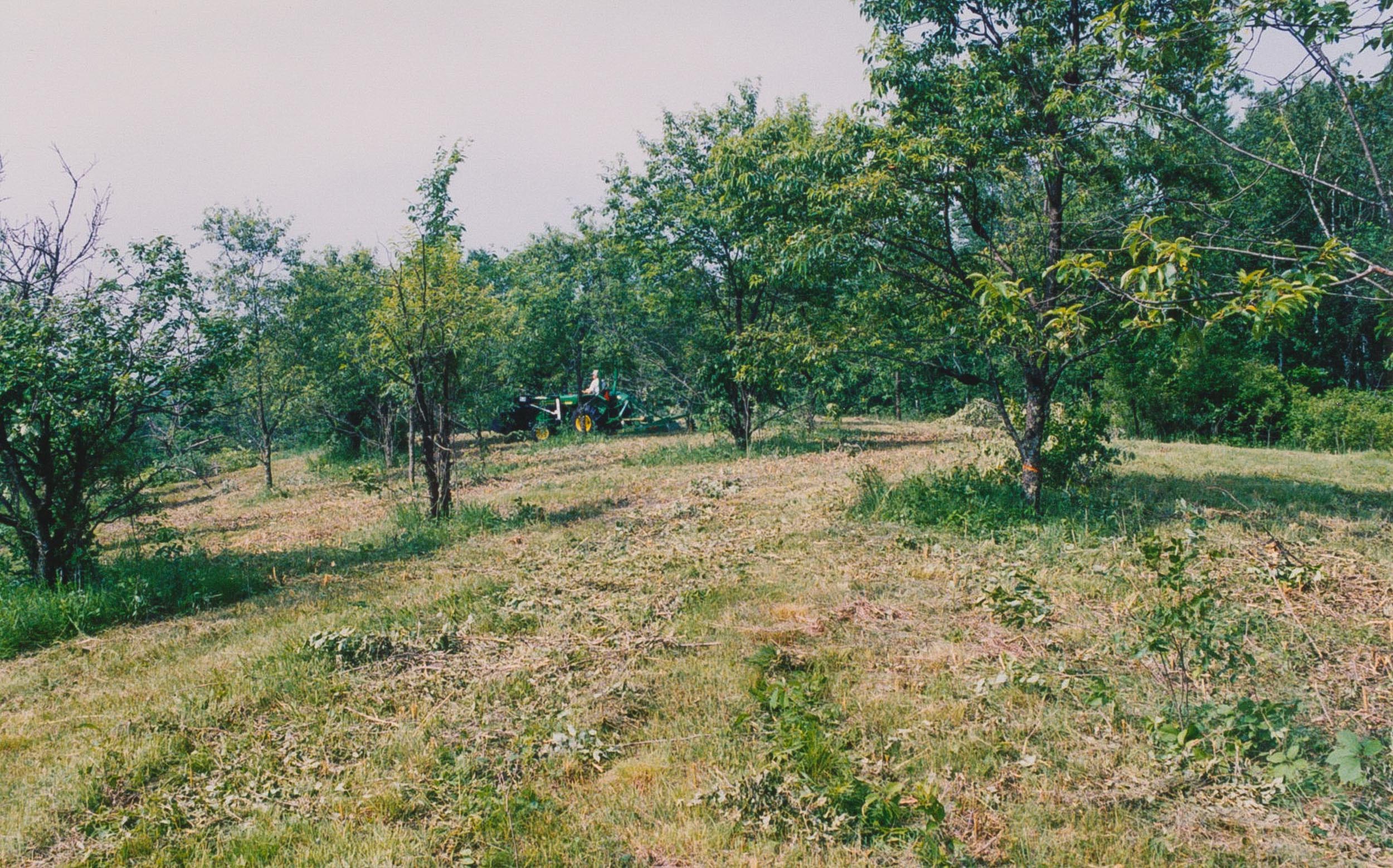 Every year we would mow the brush a little farther back into the woods, so the open area slowly expanded. 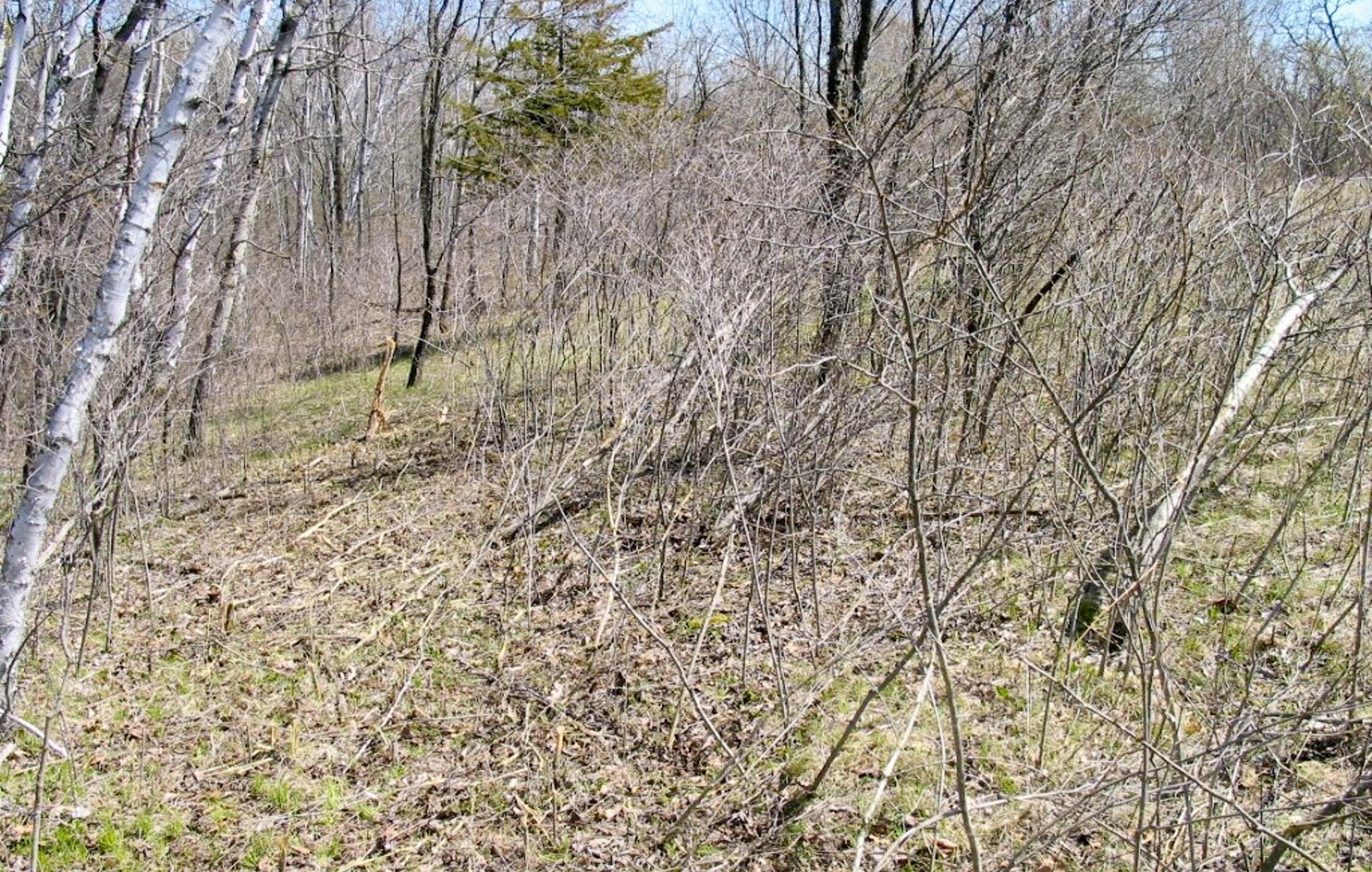 With just this once a year mowing, prairie flowers came back and bloomed in the open areas. 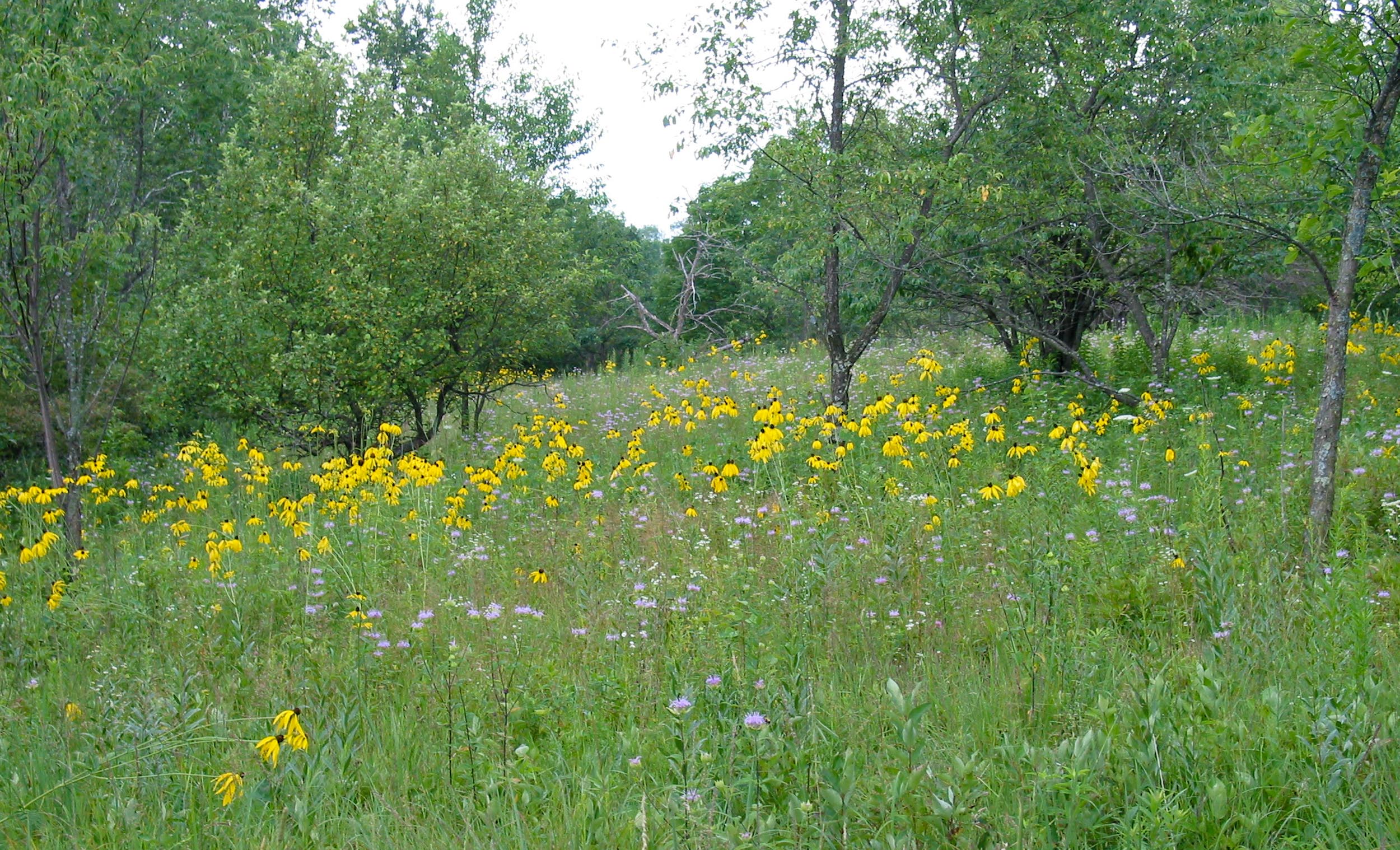 Eventually we decided we’d like to get rid of the small trees that were scattered through the prairie area.  We spent the fall of  2017  cutting the trees, treating the stumps, and we hired a friend to cut and treat more small trees from around the edges – further expanding the prairie.   That winter, and the next spring we removed all the slash to some piles back in the woods.  Here’s the prairie in the summer of 2019. 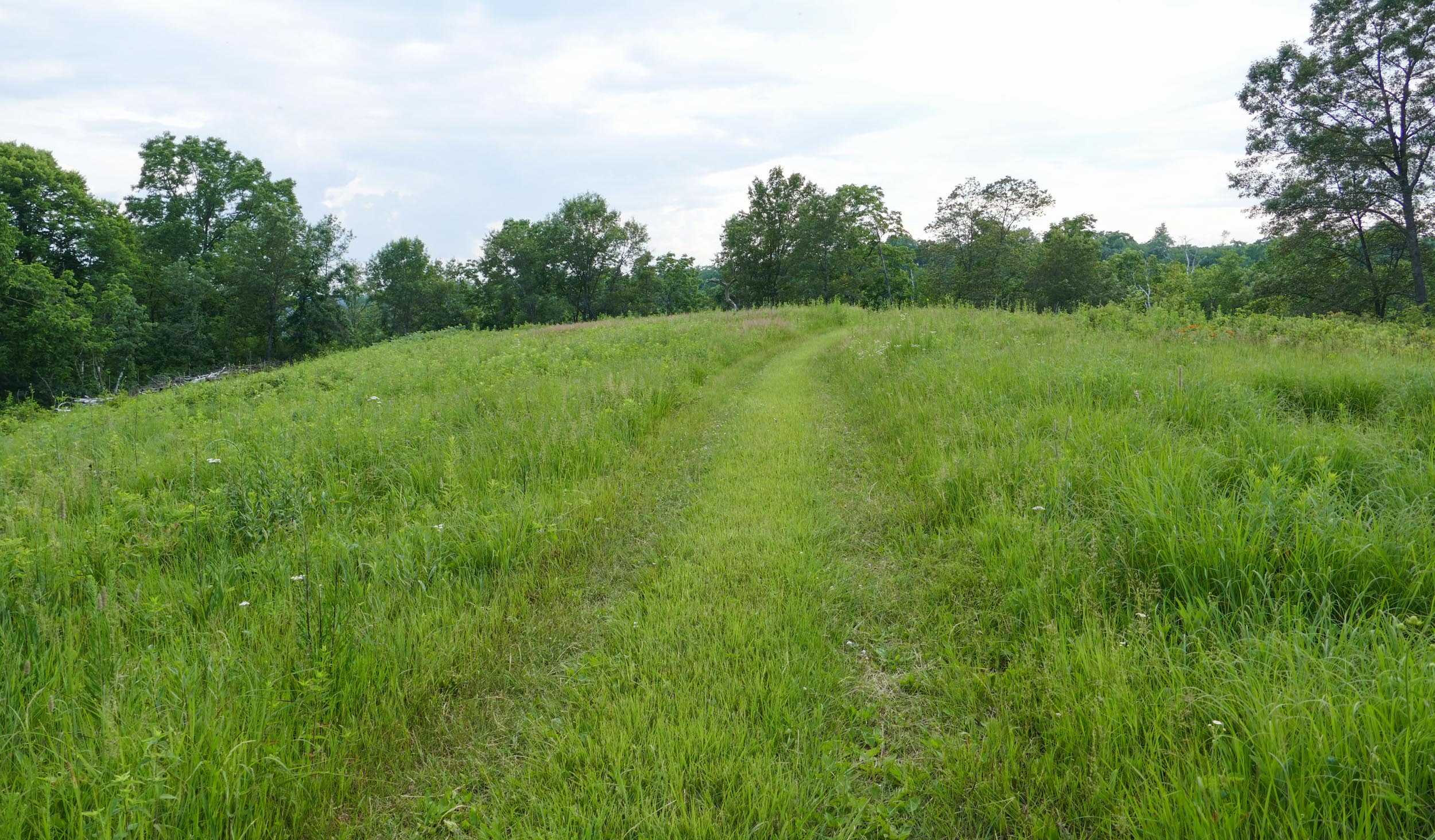 Queen Anne’s Lace has been a persistent weed in this prairie, and in the other mesic remnants.  I spend some time nearly every summer pulling and removing these invasive plants.  Since I remove the source of seeds, the number of Queen Anne’s Lace plants gets smaller every year, and pulling them takes less time.  Unfortunately I never completely get rid of them.

Here’s a 2003 photo of part of the prairie with Queen Anne’s Lace flowering. 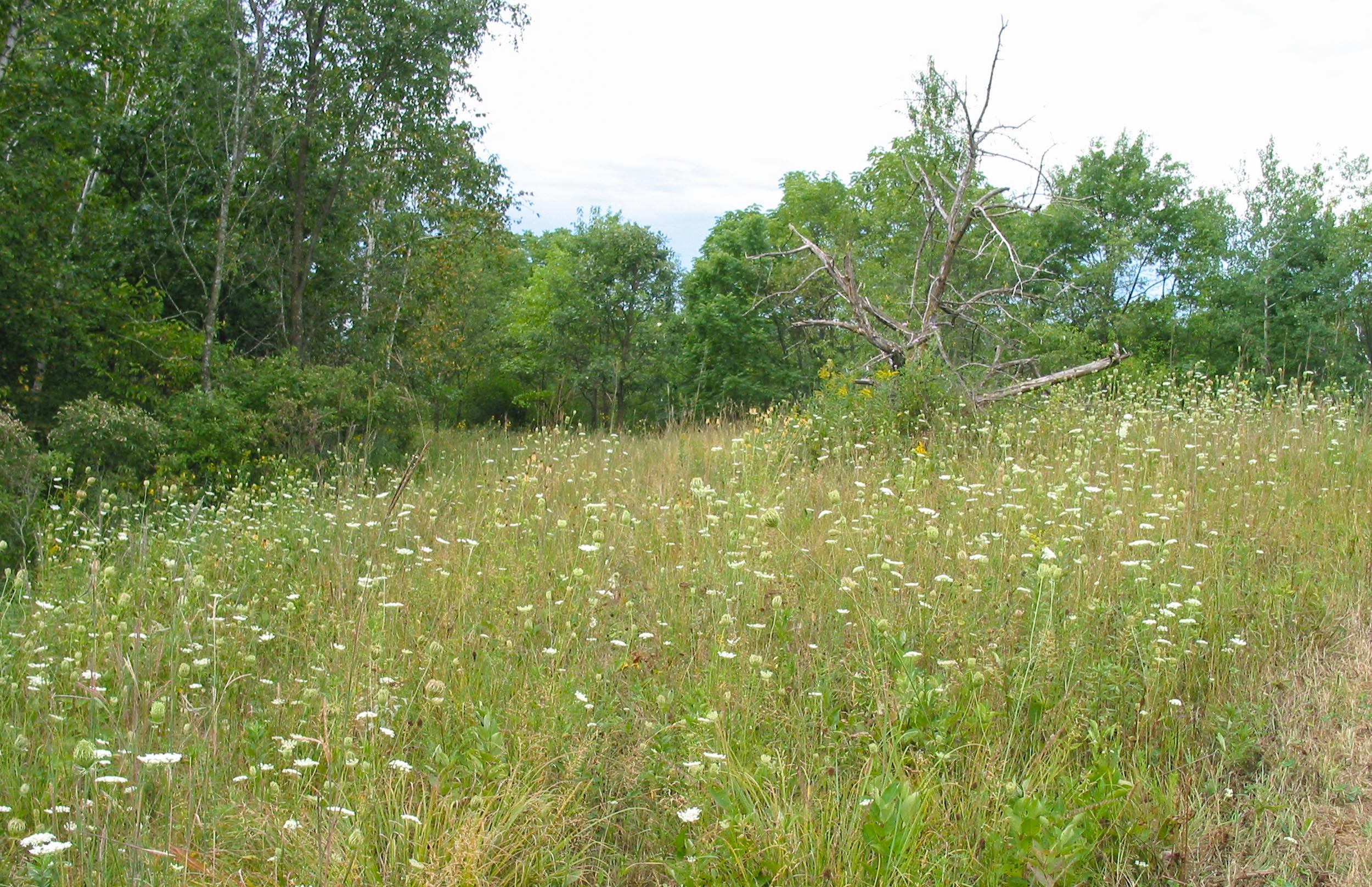 Another view, after I’d pulled and removed Queen Anne’s Lace plants from one section of the prairie. 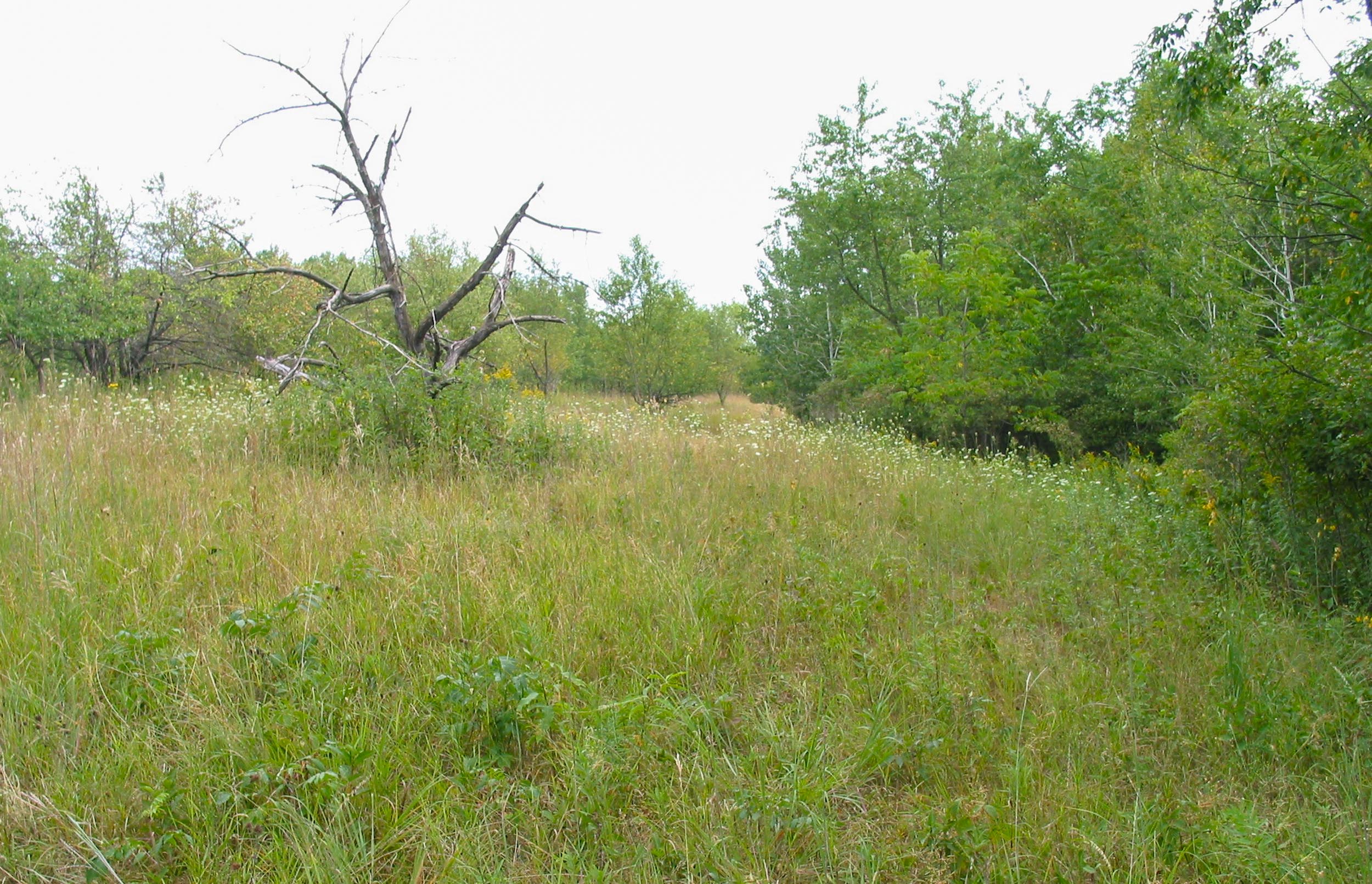 Another problem we’ve had with these mesic remnants is that some shrubs and trees are clones, so when they’re mowed, they send up more shoots from their extensive root systems.   This happens especially with aspen, and Gray Dogwood.  So as we’ve been mowing this prairie, we’ve been seeing more shoots from these plants every year.

These are small aspen and Gray Dogwood shoots in September that have grown up since the prairie was mowed in the spring. 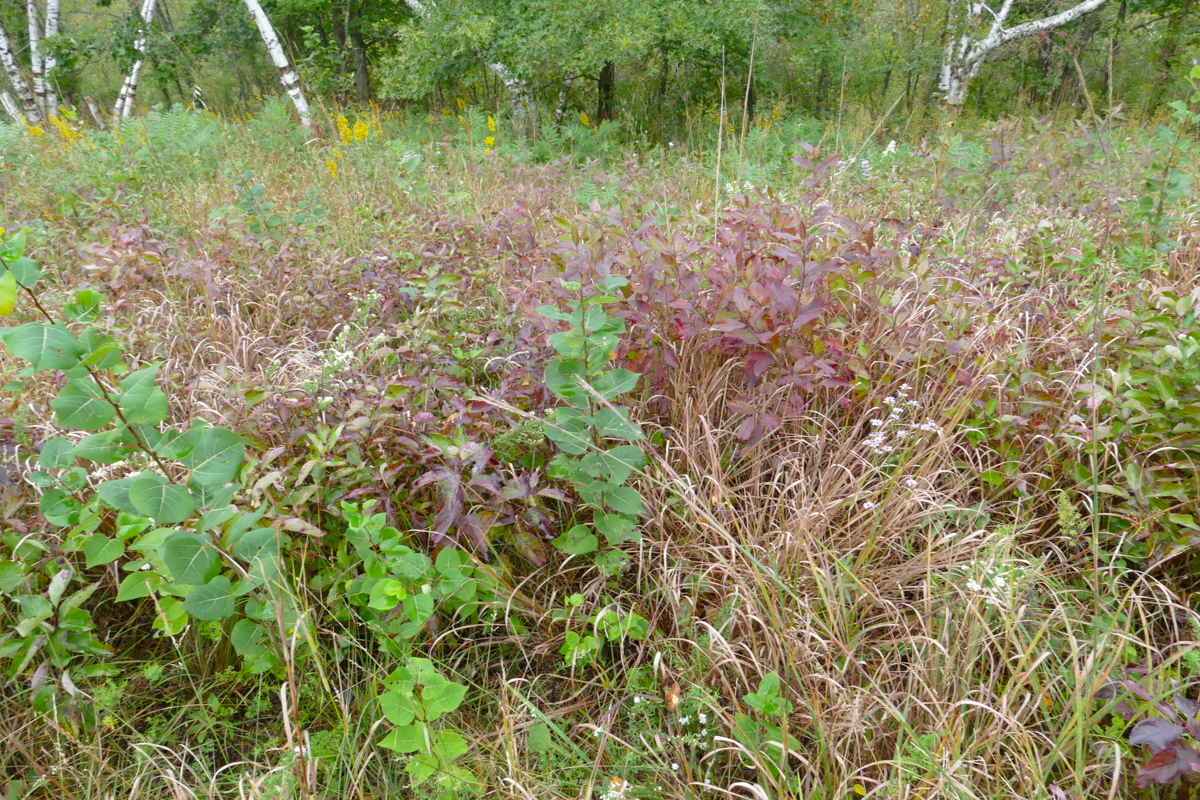 I’ve been experimenting with ways to get rid of these clonal plants.  I’ve discovered that if I cut and treat each stem in a large part of the clone, it does discourage sprouting.  At first I treated the cut sprouts with 25% glyphosate, but I think using Garlon 4 with bark oil is more effective.  It’s a slow project, but over the last 4 years I’ve cut and treated a large proportion of the prairie area, and there are many fewer sprouts from these clones.  Both the aspen and the Gray Dogwood resprout, but with less vigor, and if I cut and treat the second year sprouts, that is even more effective.  I’m continuing to experiment – so I may have better solutions in the future.

This is the very first area I tackled.  I wanted a spot with lots of large sprouts so I would be sure to know if I was making a difference.  I cut and treated these in September 2015.

And here is the treated area in 2018 – looking from the other direction.  Much more diverse, and many fewer sprouts.

We treat the mesic prairie openings in much the same way as these larger mesic remnants.  We try to open up the wood surrounding them – which is usually overgrown savanna.  More open woods lets in more light, so the plants in the openings bloom more, and the prairie plants gradually spread out under the trees in the savanna.

This is Ragwort Opening – a small prairie opening surrounded by Twisted Oak Savanna.   Here it is in 2004.

And in 2019.  Over the years I’ve pulled Queen Anne’s Lace, and cut and treated shrubs that were starting to grow out into the middle of the opening.  In the last few years we’ve opened up the woods on three sides of it, so now it gets much more sun.