We have 5 large bluff prairie areas that we’re working to restore:

The bluff prairies are all on steep south, south-east or south-west facing slopes, and they have rocky, sandy soil.  These prairie points were never plowed, but they were heavily grazed by cows for many years.  When we bought our land in 2000, they had all become overgrown with birch and aspen trees, non-native shrubs like japanese honeysuckle, and native shrubs like prickly ash and sumac.   This is the south-facing point above the house – thickly covered in a birch/aspen forest – from 2005.  We call it Indian Grass Point. 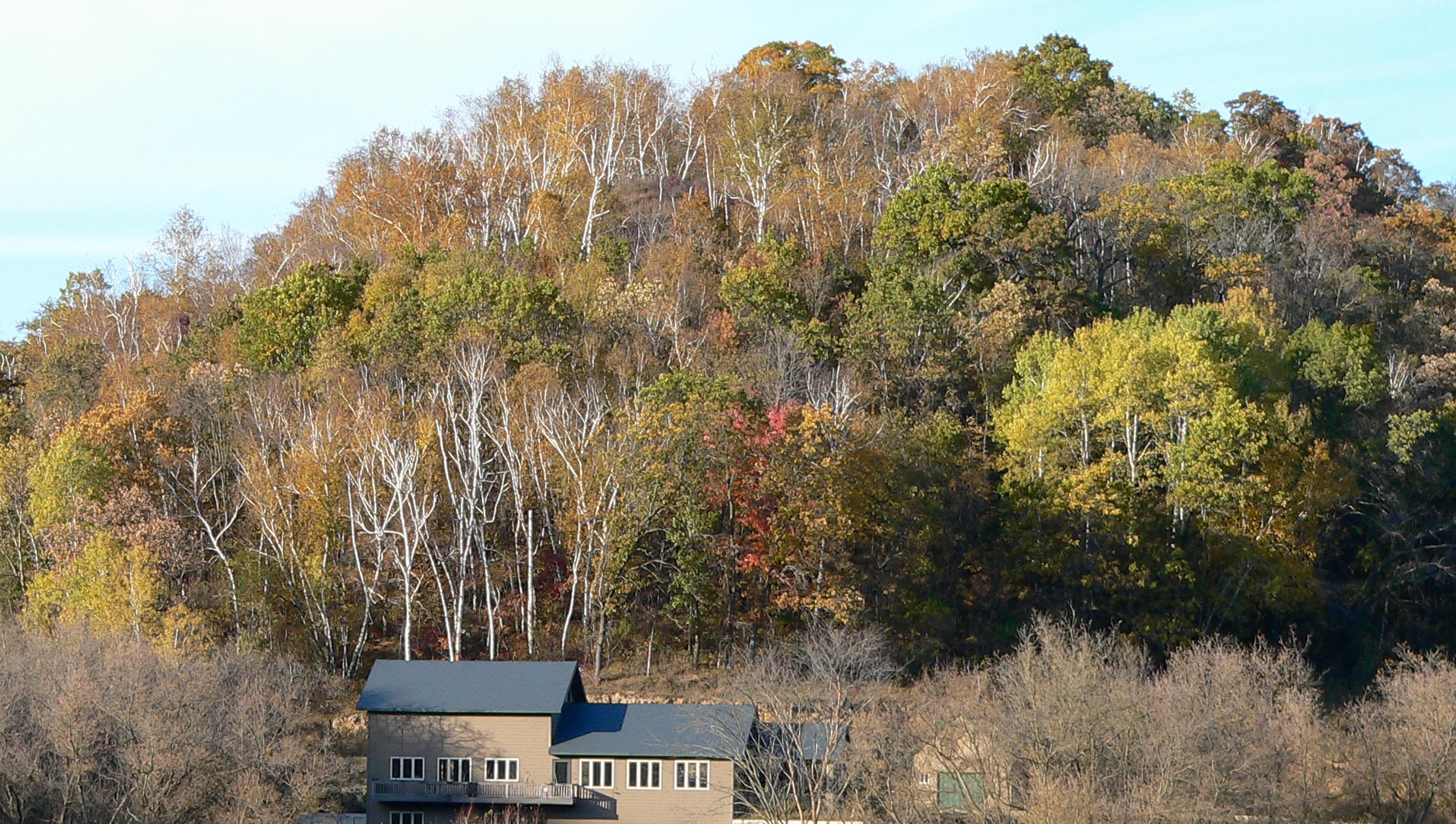 Here’s a view of Indian Grass Point from the top, looking south from the dry prairie remnant, from 2008. 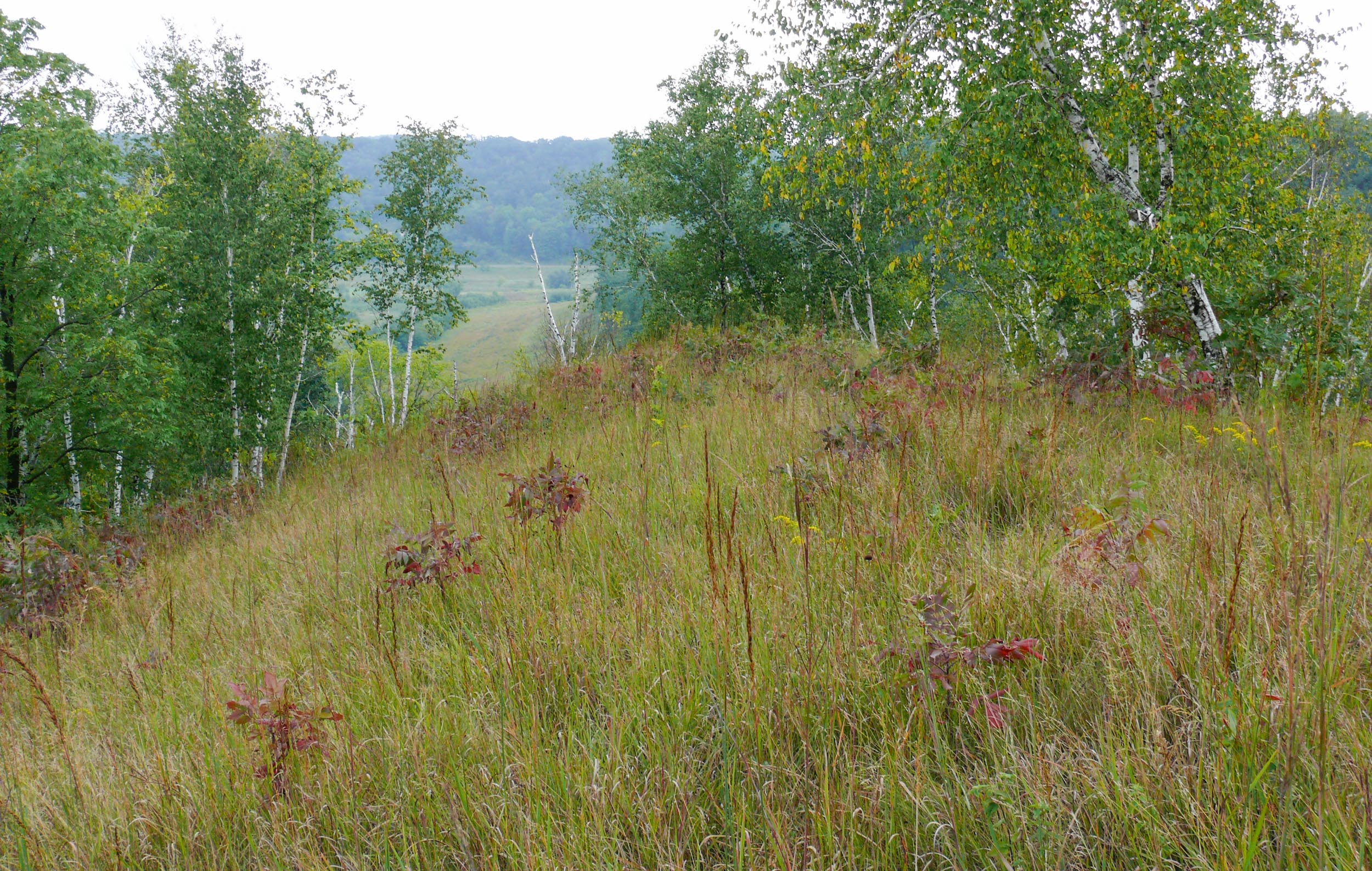 Our goal on all these prairie points is to return them to dry prairie.  The south-facing hills are so steep that water runs off them quickly, and they get so much sun that they’re always much hotter than the surrounding woods.  So the prairie plants that grow here are adapted to poor, dry soil, and need heat and sun.

Our biggest project is to get rid of most of the trees.  If there are Burr Oaks or White Oaks, or Hill’s Oaks, we save them, but we cut or girdle most of the rest.   Many prairie plants can survive years of shade and grazing, so as soon as they get more light, they start to recover.

This is the west-facing hillside on Indian Grass Point.  When we first saw it, birch trees and some small Black Walnuts had grown up over the whole hillside, and bushes were starting to fill in underneath.  This is a photo looking down from the top in 2007, before we’d done any work on it. 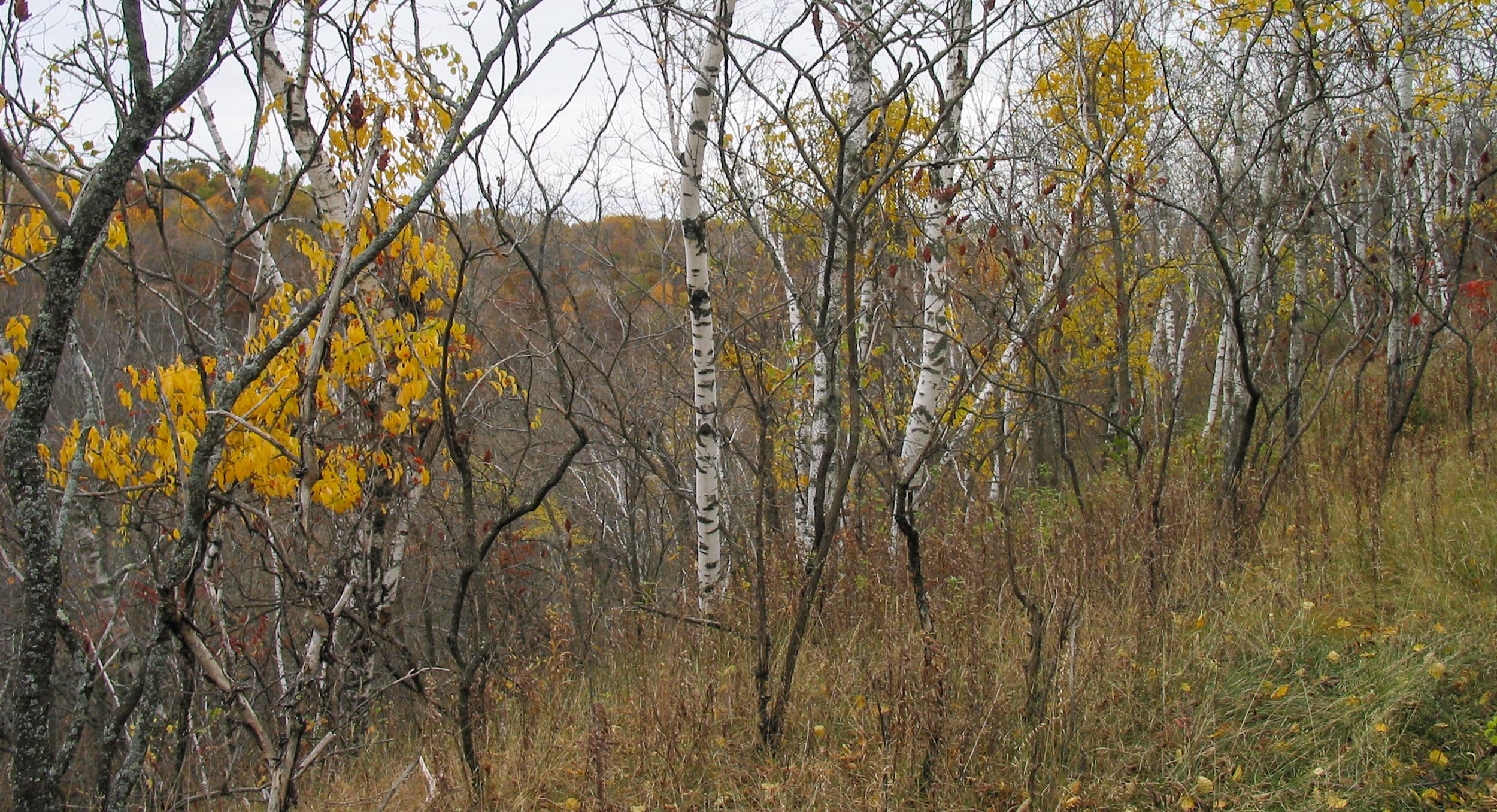 The hillside was so steep that it was difficult to use a chainsaw, so we girdled the birches and walnuts to kill them.  It took them several years to die, and we let them fall and decay naturally, rather than trying to carry them away.

This is the way the hill looked in 2008.  This view is from lower down on the hill – looking up into what was the birch forest.   The trees are dying, so more light is getting to the ground, but it’s still full of brush – mostly honeysuckle, prickly ash, gray dogwood, sumac, and raspberries. 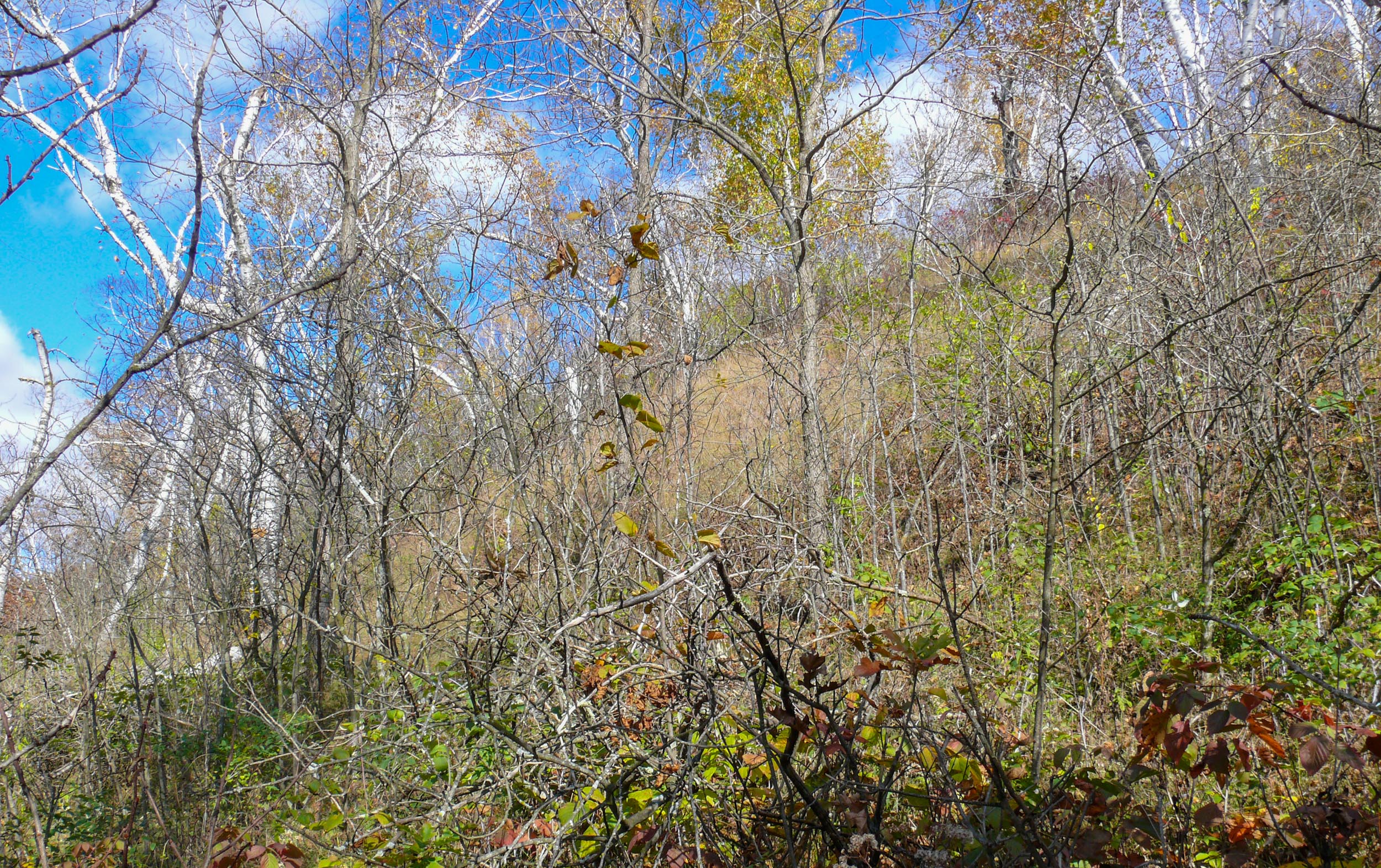 This is from a month later, after I’d cut and treated a large area of the brush.  The most effective way we’ve found to get rid of brush is to cut and treat each woody stem with herbicide.  It’s a slow process, but it works well.  It often has to be done again a few years later to catch the ones I missed, or bushes that come up from seeds.  In this case, there were so many cut branches that I didn’t want to leave them on the ground, so I threw or dragged them down to a pile at the base of the hill. 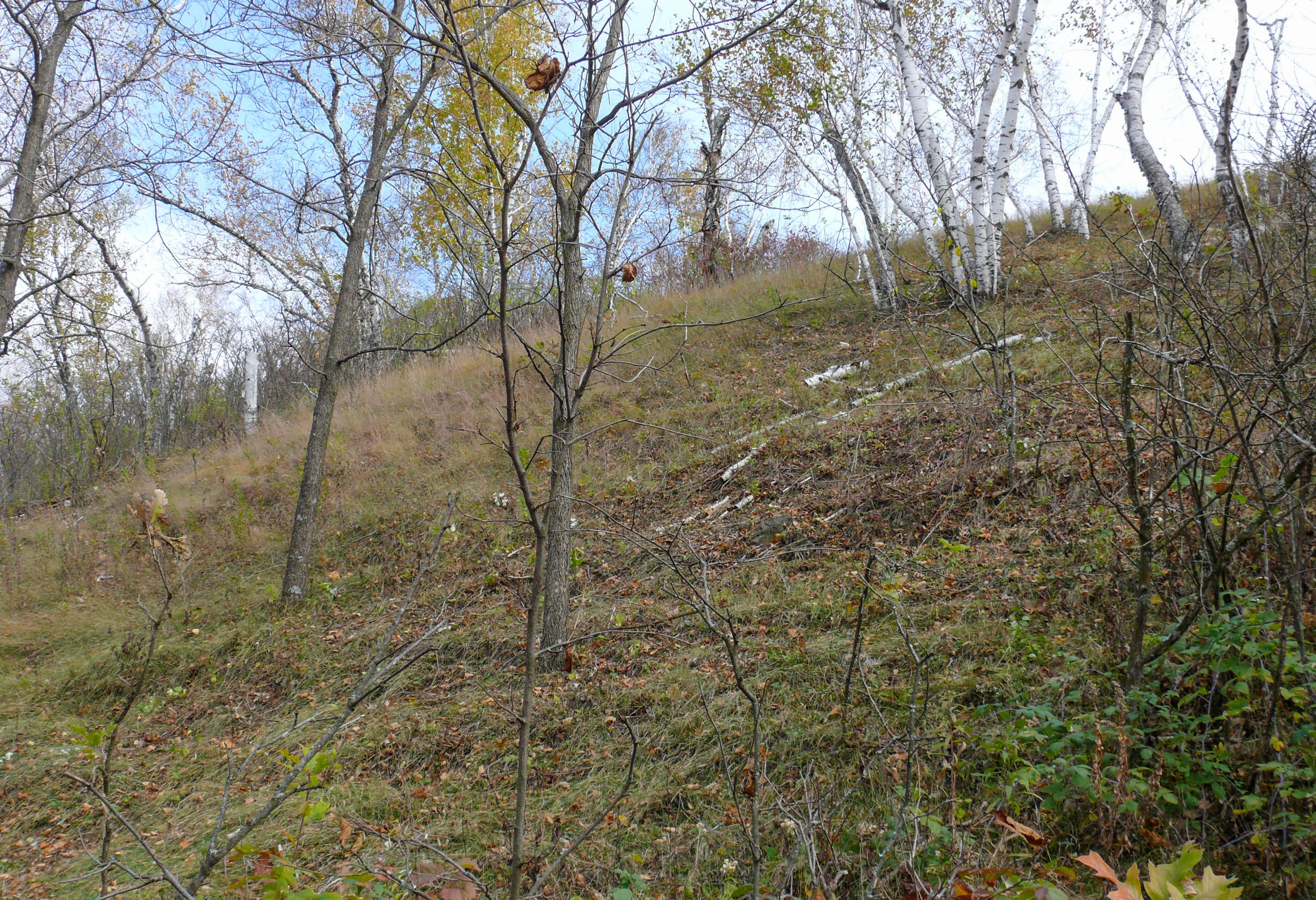 This is the same hillside from spring of 2010.  Some of the birches are still alive, but many have died, much of the brush is gone, and spring prairie flowers are blooming: Hoary Puccoon, Wild Columbine, Sand Cress and Blue-eyed Grass. 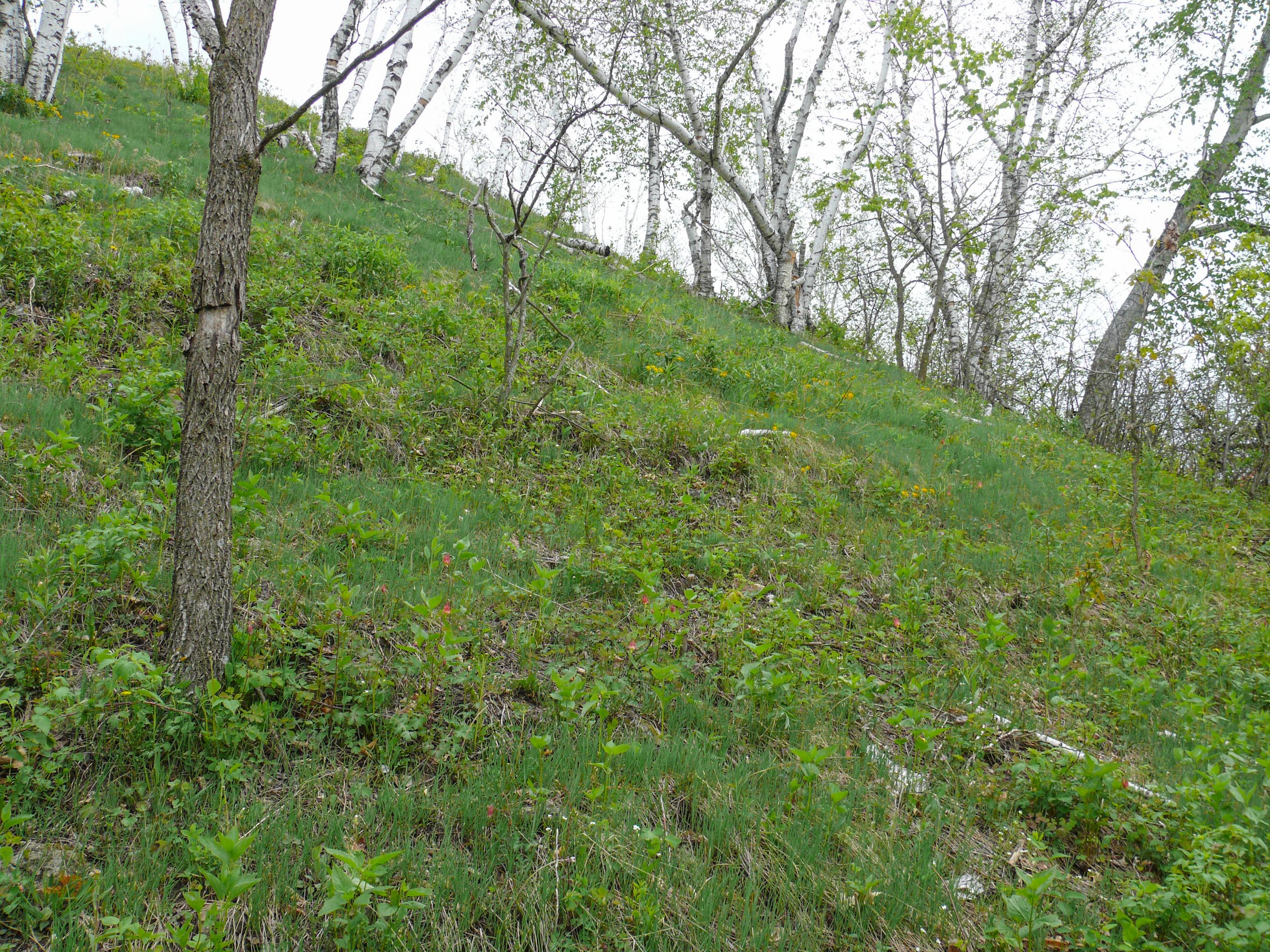 The same hillside from fall of 2014.  The bright yellow is the fall color of Spreading Dogbane, and also blooming are Gray Goldenrod and several asters.  I’ve had to do a little more cutting and treating of brush – it’s still a problem in some places. 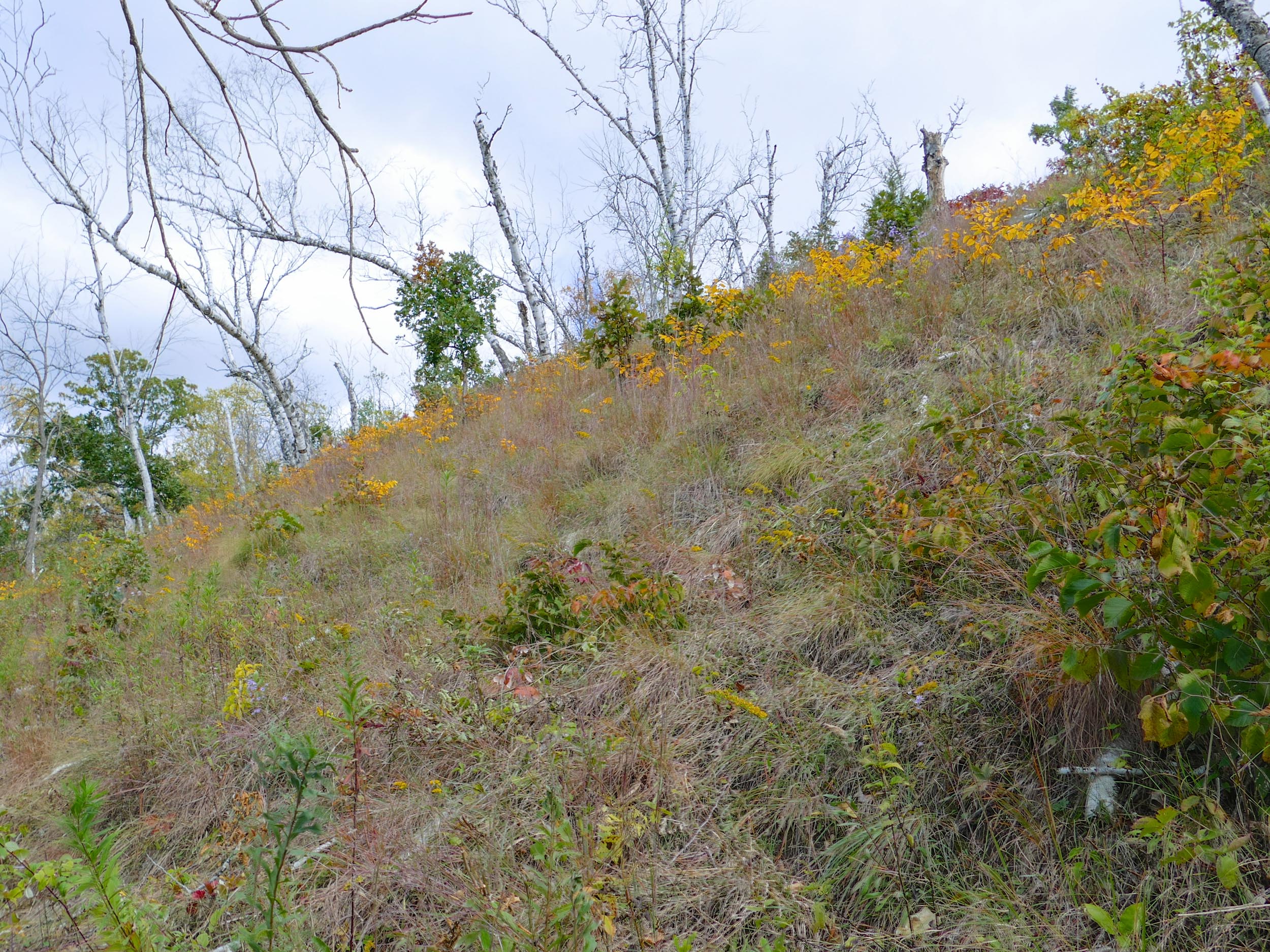 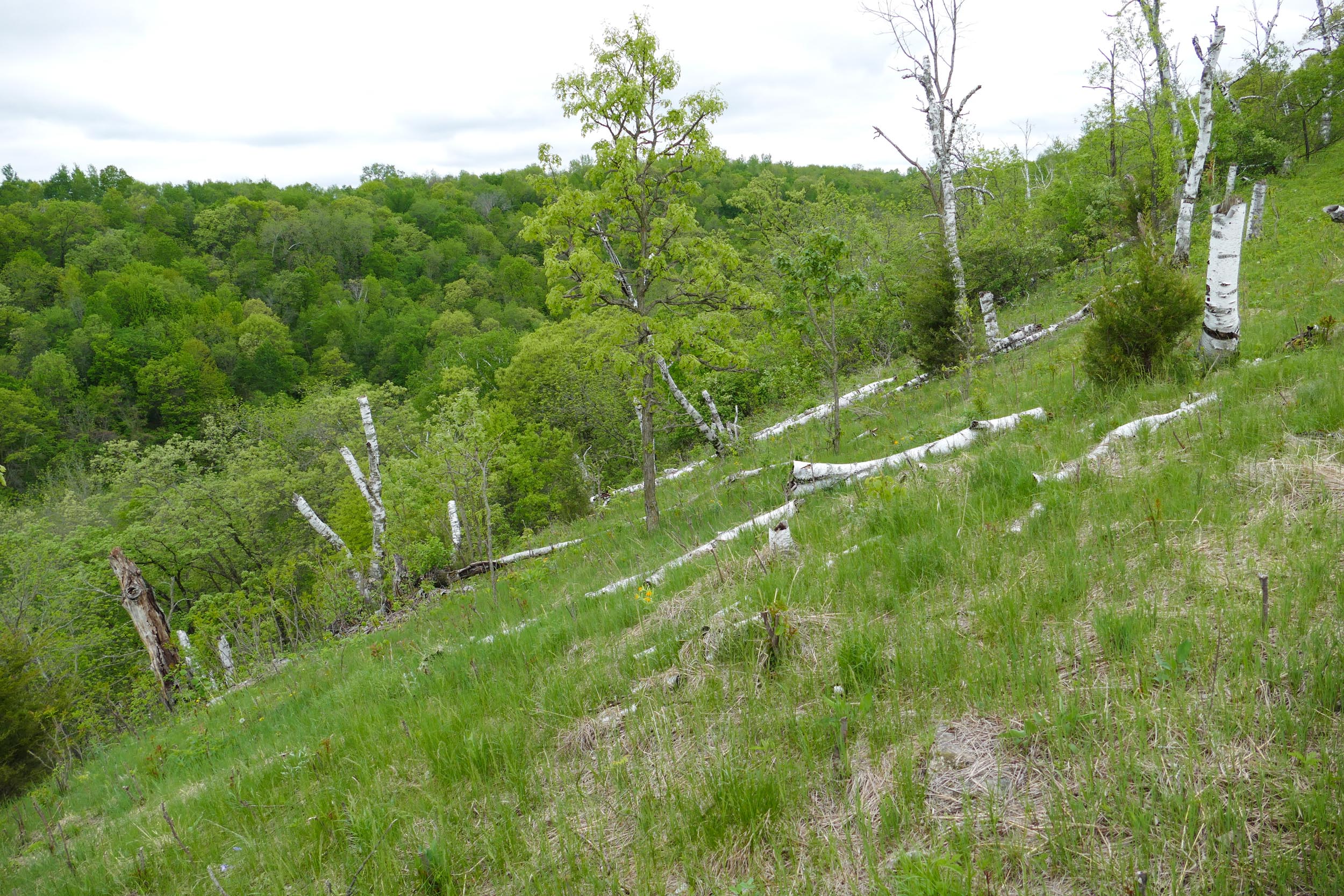 I don’t usually plant new seeds in remnants.  I like to see if there are enough plants and seeds already there to heal the hillside without adding anything new.  Sometimes if there are plants that really should be there (judging from similar prairies nearby), I plant seeds.  And I’ve been given seedlings of rare plants that I sometimes add.  But mostly I make sure the woody shrubs aren’t coming back, and just let it grow.

On this prairie I did plant a few rare plant seedlings that were given to us by a friend.  I planted Hill’s Thistles and Wood Lilies on the steepest part of the slope – hoping it would discourage deer from browsing the plants.  This is one of the Wood Lilies, about to bloom.

On other parts of the dry prairies, we’ve used chainsaws to cut the larger invading trees.  The south-facing slope of Indian Grass Point was one of those places.  Our main walking path to the top of the hill goes up this hillside.  Here’s the path in 2008 – going up through thick woods. 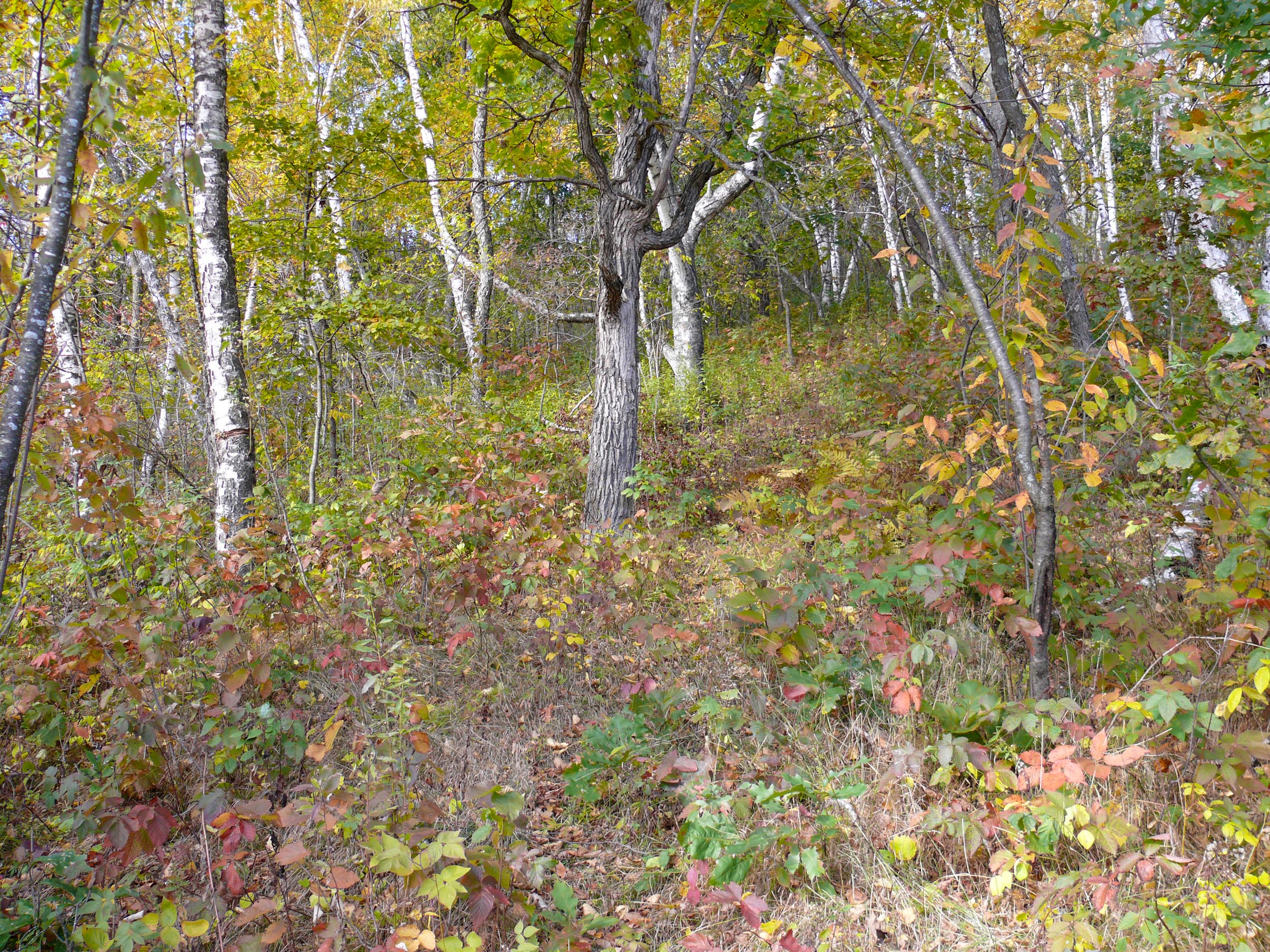 I girdled the birch trees, and the few aspens.  A few years later the birches and aspens were dead, but there were still many small oaks, and many shrubs.  This photo is from 2015 – the birches are dead and many have fallen, but there are still lots of small trees – cherry and oak – and much brush. 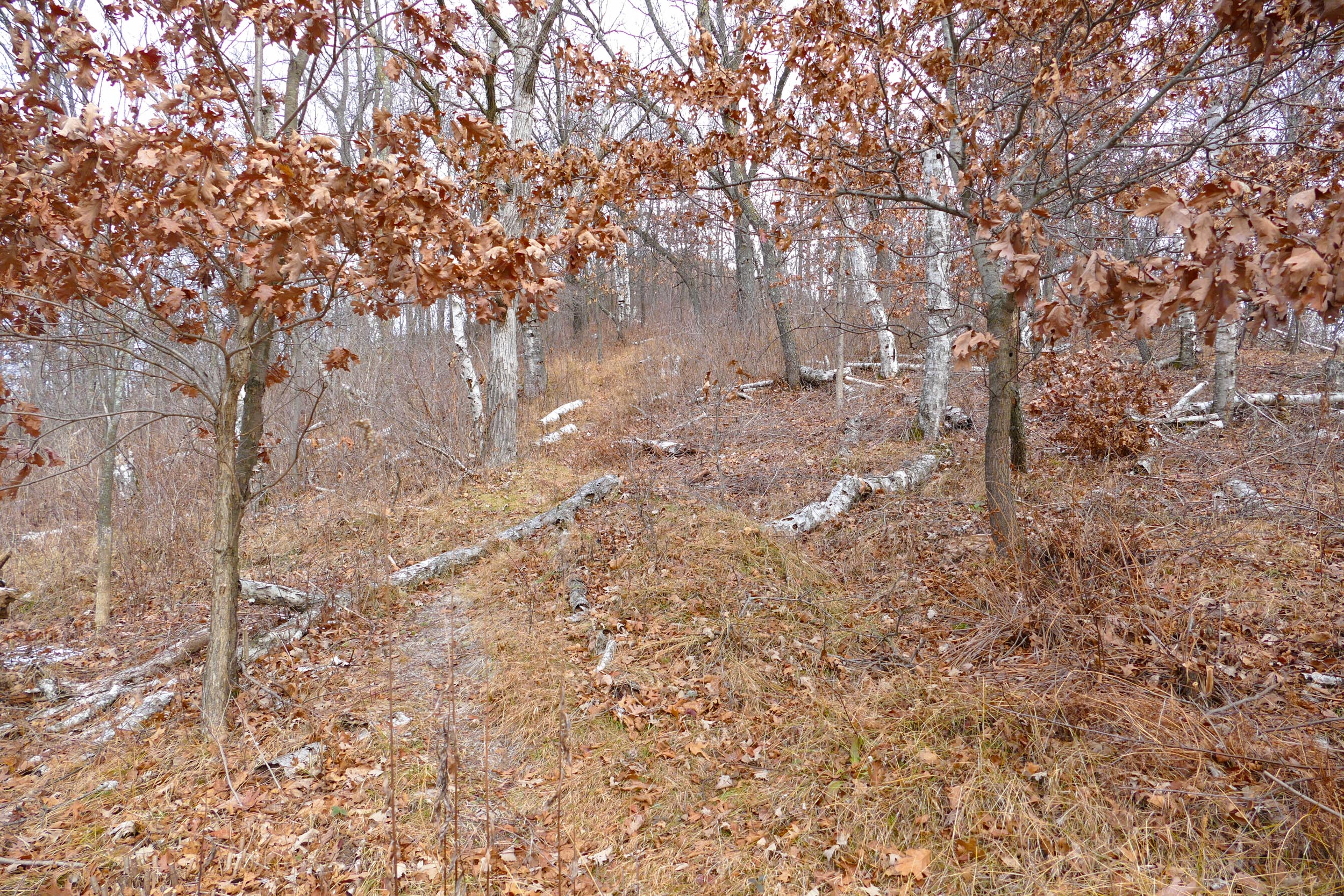 That fall – 2015 – we started cutting.  We left the dead trees as habitat for woodpeckers and other creatures, but cut and treated smaller trees and shrubs.  We left trees that were too large for us to cut – mostly black cherry, black oak, and elm – and some of the smaller white and burr oaks.   There was too much slash to leave on the hillside, so we dragged it down into piles behind the house, and Mike drove in with the tractor, picked it up and piled it in the woods in 3 Finger Valley. 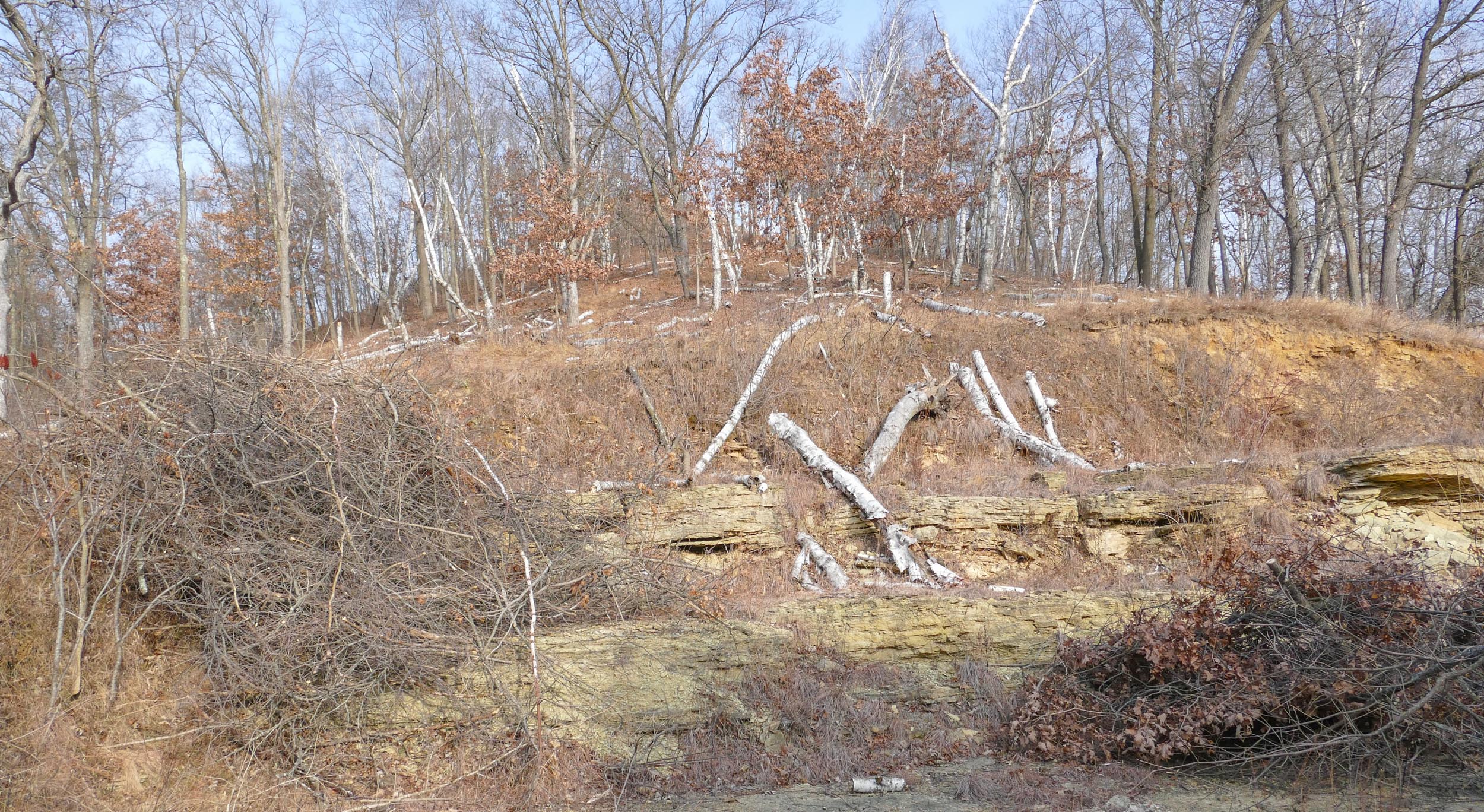 This is the following year – 2016.  There are still birches that are dead but haven’t fallen, and many still decaying on the ground.  And we haven’t worked up to the top of the hill yet.  But the lower part of the hill is very open, with just a few oaks. 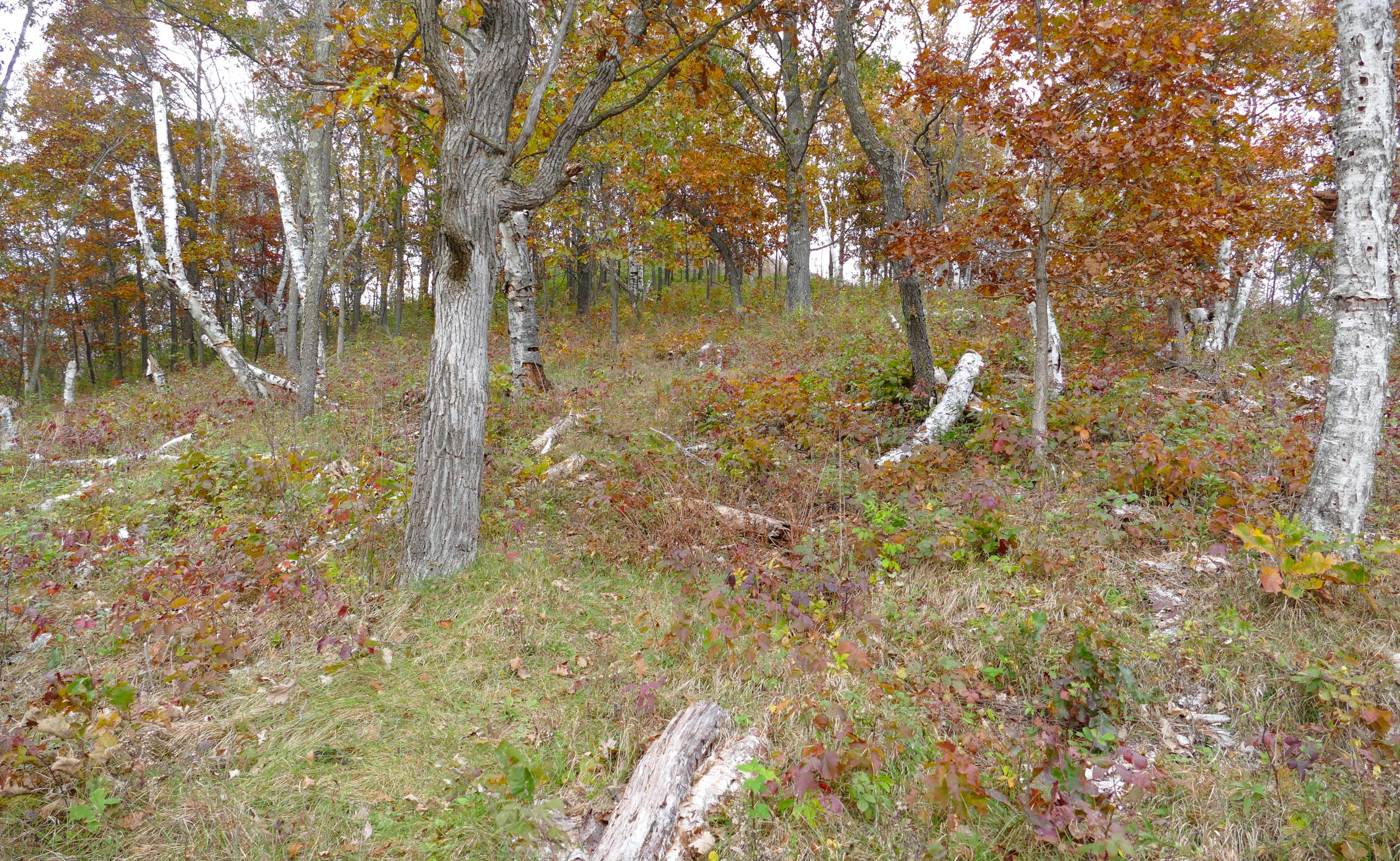 This is the lower part of the hill in the spring of 2017.  The flowers blooming are Wild Geranium, Wood Betony, Wild Columbine, and Blue-eyed Grass – none of these were planted. 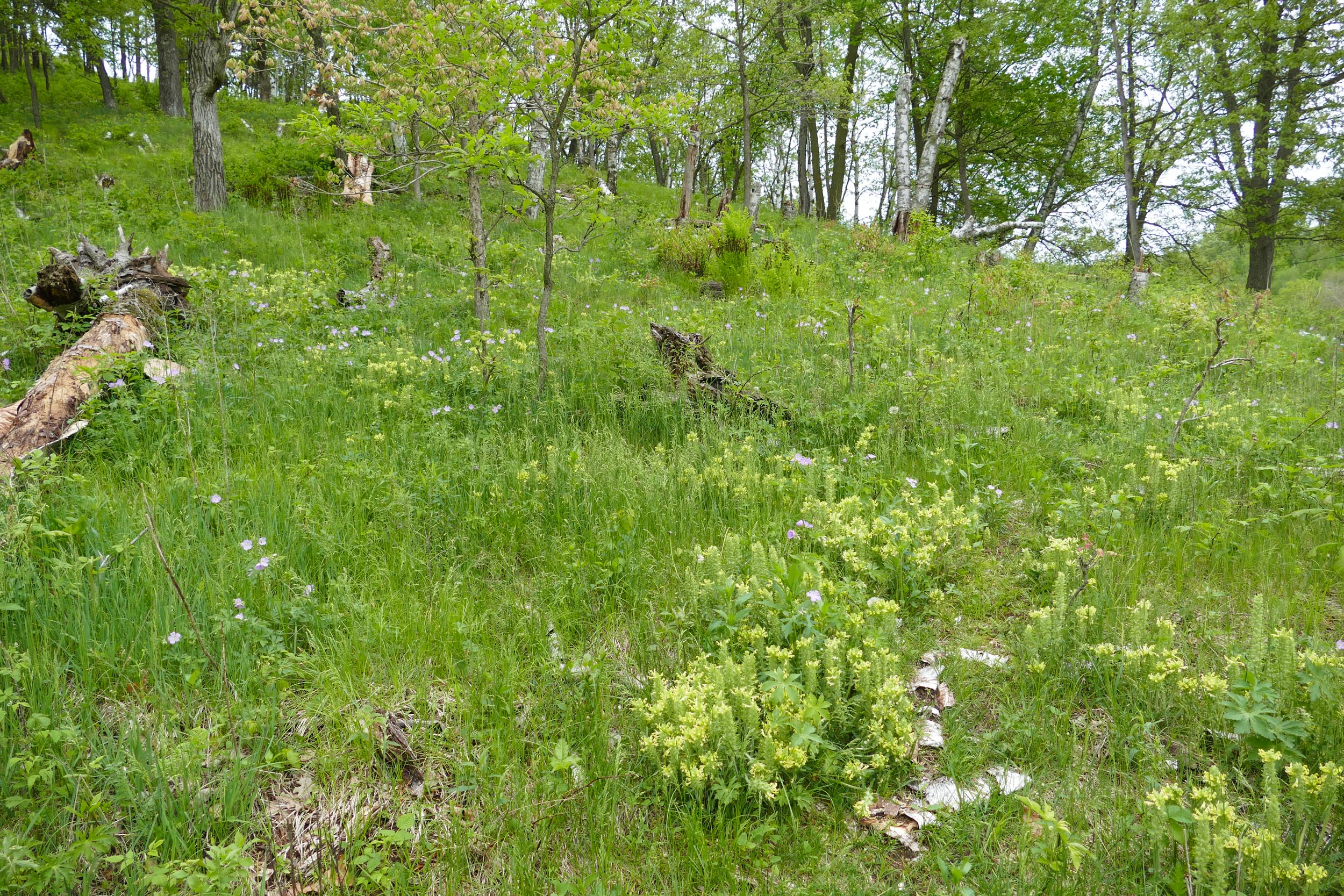 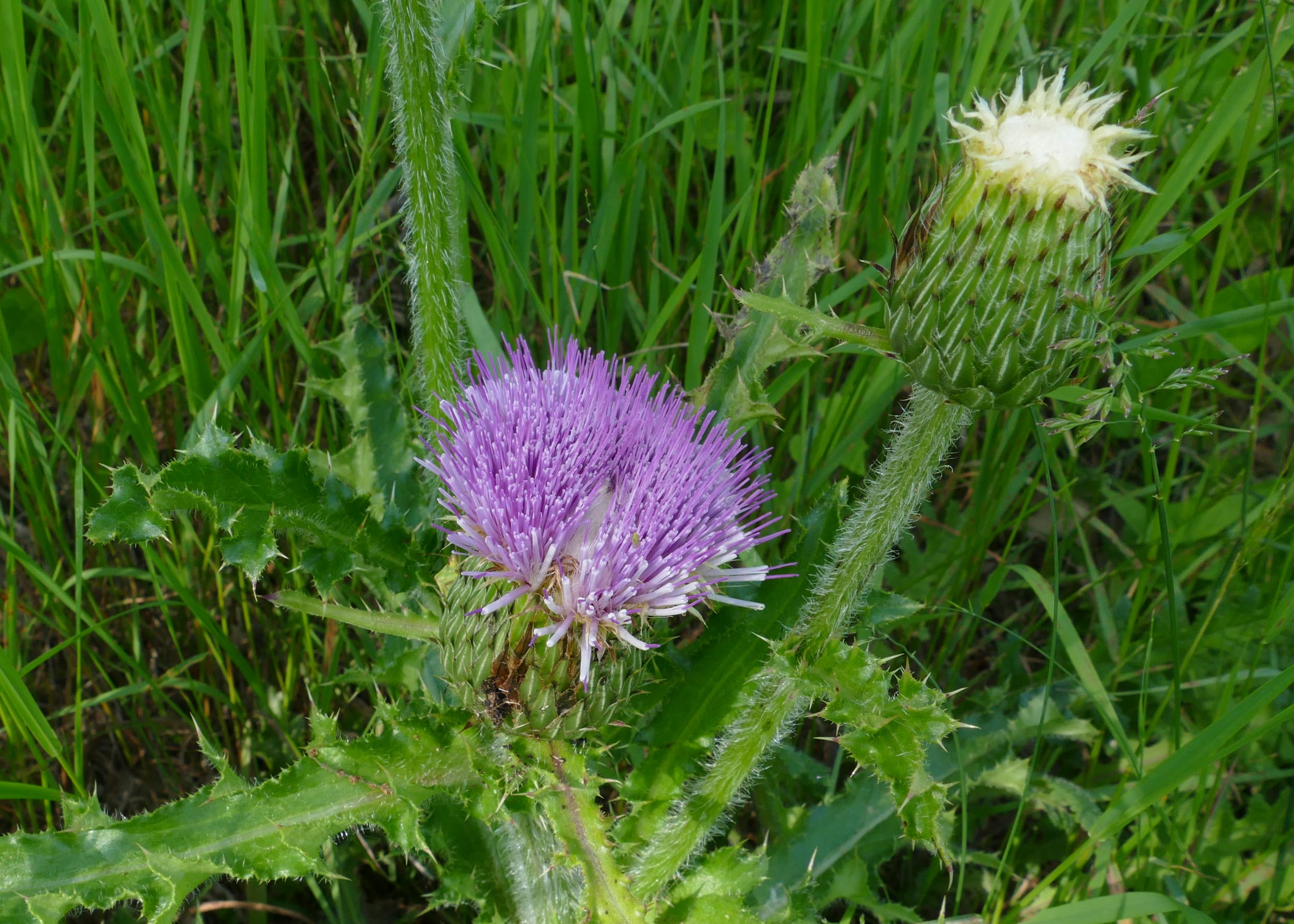