by David and Shelley Hamel

Since 1988, we’ve been enthusiastic burners, cutters, herbiciders, pullers, weeders, planters, seeders on our 120-acre prairie and savanna restoration. It’s been mostly a do-it-yourself (DYI) operation, but we read, listen, ask, go to conferences, join groups, seek advice from government agencies, and we try to be responsible stewards to this island of Karner blue butterfly habitat. If you measure success by the numbers of Karners here after 30 years, we’re successful. We’re awash in lupine, and Karners are abundant. 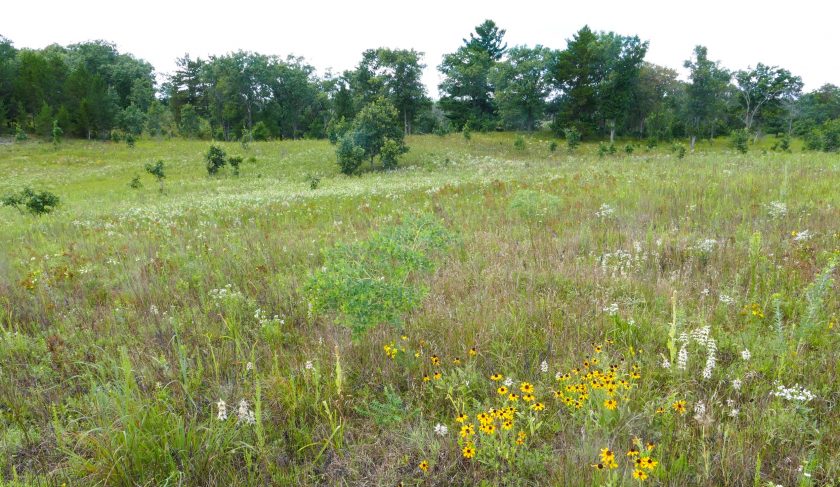 So what’s the problem?

It’s what we still don’t know. For example:

What could go wrong? We’d chosen 20 of our 120 acres to establish an oak opening by thinning the vegetation or in management terms “setting it back.” This was a historically grazed oak/cherry woodland with no sign of ever having been burned: many small, grubby 3’-6’ red and black oaks; well-spaced 100-150 year old red, black and white oaks; oak wilt scattered throughout with many standing dead snags; a few pines and red cedars; many 20’ black cherries and a Pennsylvania sedge understory where we could find scatterings of lead-plant, little blue stem, Birdfoot violets, puccoon. 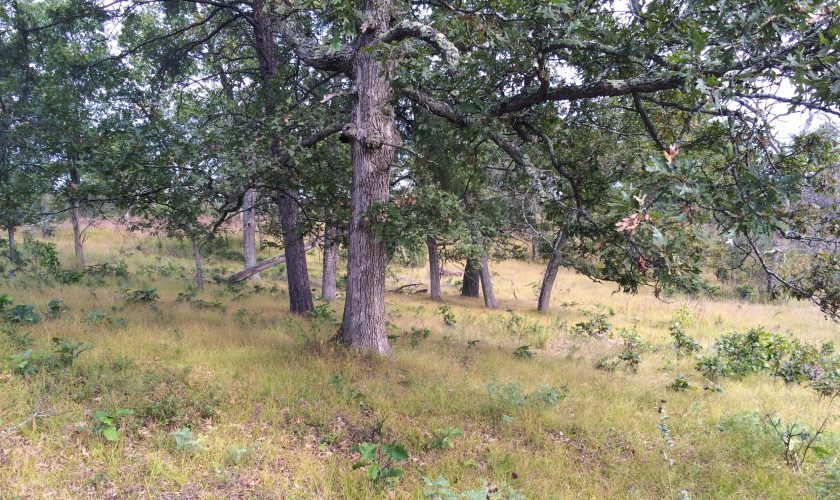 We burned with a professional crew using a typical burn plan that prescribed black-lining a downwind perimeter followed by a final upwind head-fire. The head-fire was intense, requiring cutting down standing dead woodpecker trees that caught fire. The fire burned through thick Penn sedge, duff, and hollow (habitat) logs dead from oak wilt, and created burn damage on some of the big oak trunks. It top-killed the shrubby understory and killed pines and cedars outright. The tired crew left, and we monitored smokes throughout the night.

Before the fire, the cherries were 20’ tall. Two years later, an exponential “fountain” of 4’ cherry stems emerged from all the top-killed cherries while fountains of 2’ stems sprouted around top-killed oak stumps. White oaks as big as 6” in trunk diameter were top-killed. Not unexpectedly there came brambles and with all the new, leafy shrubby vegetation came more shade.

We burned again in three years with another professional crew. Less duff meant a cooler fire, but the goal wasn’t clear, just that it was “time” to burn again and that it “needed” to be burned; three to five year intervals were considered normal.

So, even here on our Plainfield outwash plain – a sandy soil susceptible to drought – our skepticism was yet to be triggered. But eventually, the big burn scars doomed the previously healthy old oaks that were the foundation of the oak opening and savanna attempt. Wounds from a hot fire became entries for rot and eventual weakness at the base. The extent of the damage wasn’t noticeable at first, but eight years later the big, scarred oaks are breaking off at the base and toppling, and not from oak wilt.

Had we expected an exponential explosion of cherry and oak grubs and a large percentage of big fire-scarred oaks dead on the ground, we would not have burned those 20 acres. Even raking and wet-lining around the base of the oaks (an impossible task) was unlikely to protect them from head-fire damage. Had we used other management methods like cutting/dabbing with herbicides to create/maintain openings in this small unit, the outcome would have been different.

Now we have some evidence about what happens to an oak woods in northwestern Marquette County when you do an October burn followed by another October burn three years later. Your work has just begun because you end up battling all the top-killed re-sprouts, and you lose your “not-so-fire-adapted” big oaks. Meanwhile, you have no idea what fire has done to the rest of the landscape – invertebrates in particular. 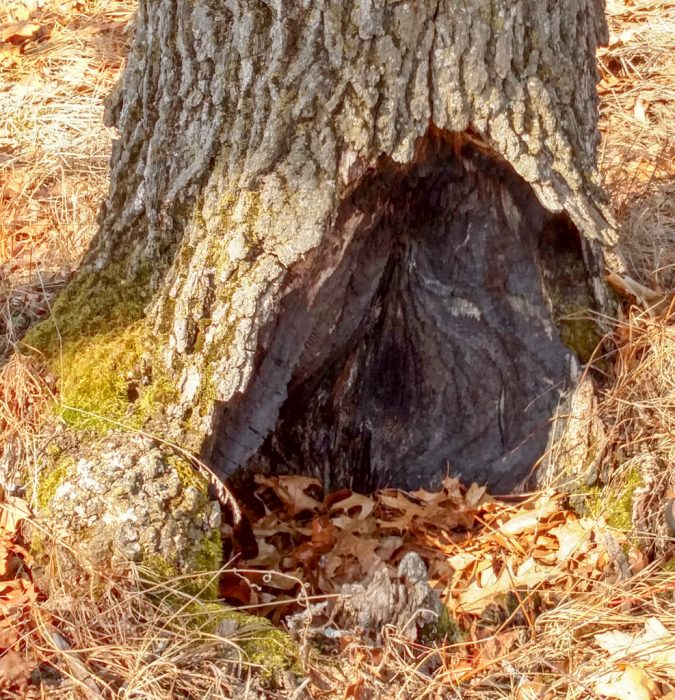 The unintended consequences of working with only the most cursory information about restoration keeps us awake. Many of us come to restoration as laypersons, volunteers, plant enthusiasts, native idealists all basically blank slates when it comes to evidence-based management of our particular, unique plot of habitat. Reflecting further, using as a management model a pre-agricultural landscape with hundreds upon hundreds of contiguous square miles of wild habitat is not today’s reality. Today our 120 acre plot is a tiny oasis that has itself become an island refugia among the potato/soybean/cranberry/corn fields that stretch for miles in every direction.

We are exaggerating the amount of knowledge you need before creating a site-specific management plan – you can’t know everything — but absent long-term monitoring of habitats like ours, we enter an arena of variables with many unknown outcomes.   We must manage; benign neglect is not an option. But we’re more conservative now, questioning broad-brush definitions like “fire-adapted,” applying herbicides more selectively, using an indiscriminate tool like fire carefully when hard evidence about outcomes is thin, and like Hippocrates, we’re trying like mad to “first do no harm”.

David and Shelley Hamel are working to protect and restore prairie and oak savanna and Karner Blue butterfly habitat on their land in Marquette County, Wisconsin.