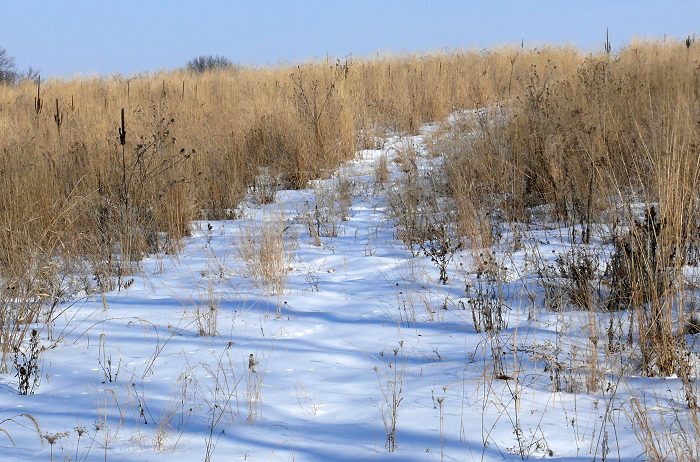 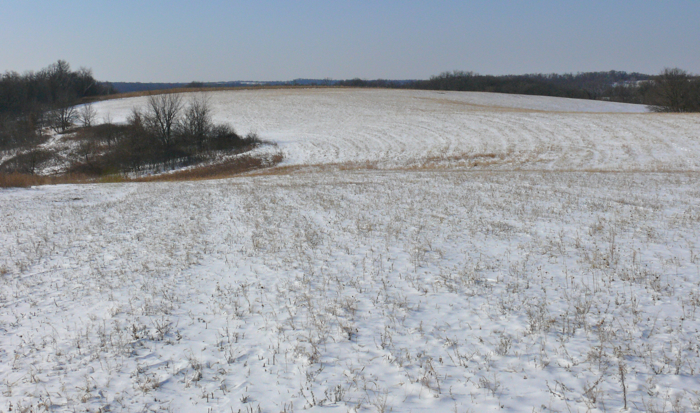 Since the north end was planted with a seed drill, the seeds were planted in rows.  The rows are especially visible in a few places along the edge of the field. 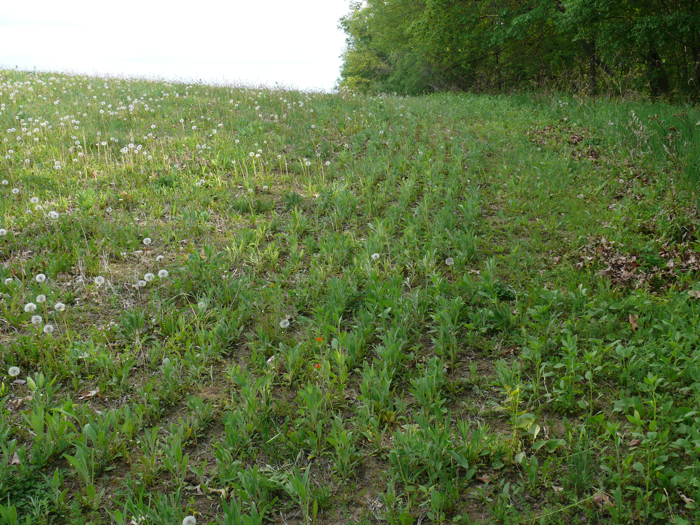 But there’s Indian Paintbrush blooming, in spite of the rows and the dandelions. 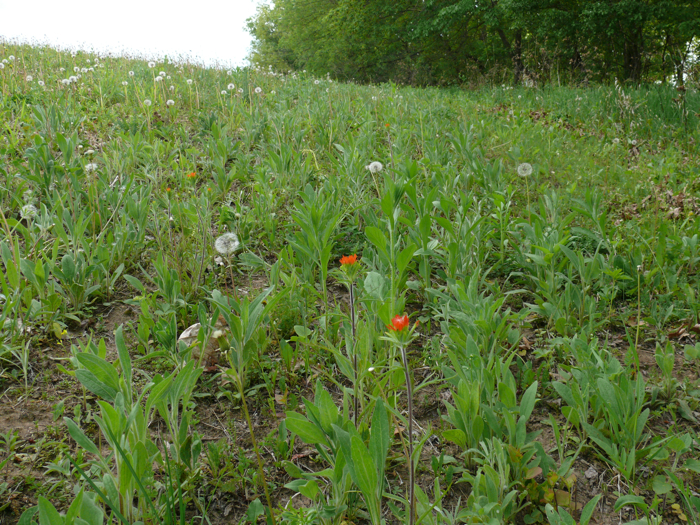 In the center of the prairie, the rows are less obvious. 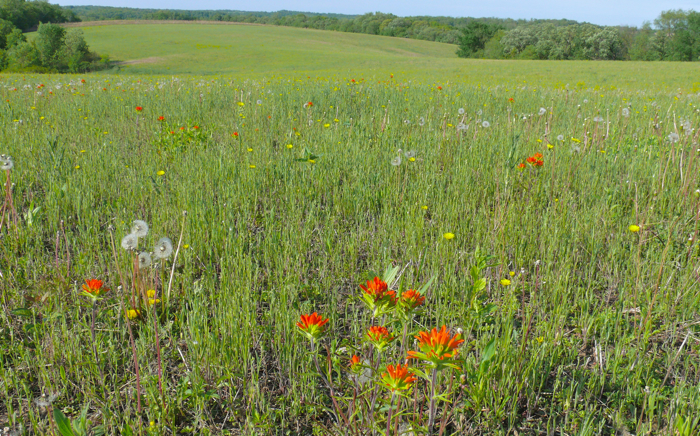 The yellow flowers are Crepis tectorum, Hawk’s-Beard, an introduced weed that grows in disturbed places.  It’s common in our newly planted prairies, but seems to disappear as they mature. 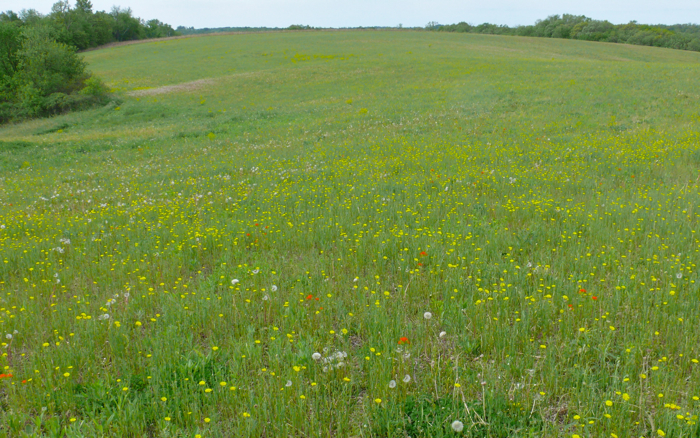 We did mow this northern section again this summer.  It had lots of Queen Anne’s Lace, Mullein, and Bull Thistle, and and I decided it might help to mow.

There’s a small area on the way down into Volvo Meadow that had lots of weeds, but some Large Penstemon plants bloomed there this year – the first time I’ve seen them in any of my prairie plantings.  It’s a gorgeous plant – I hope it continues to do well there.  That area is slightly wetter than most of the prairie – it’s actually the top of what becomes a stream for meltwater in the spring.  I thought Large Penstemon liked dry, sandy soil, so I’m a little surprised to find it growing there. 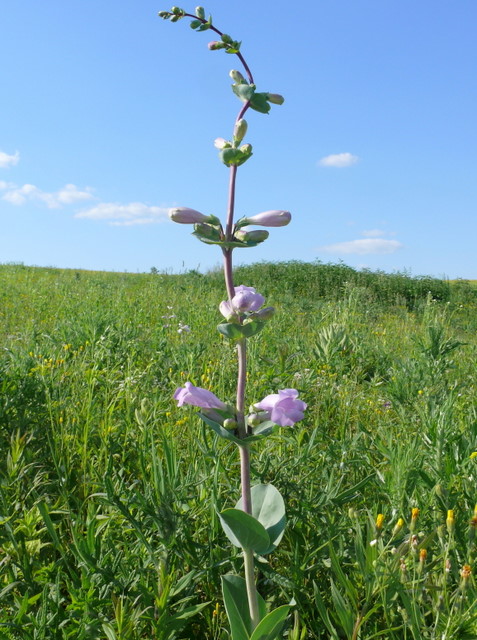 A closeup of the flower 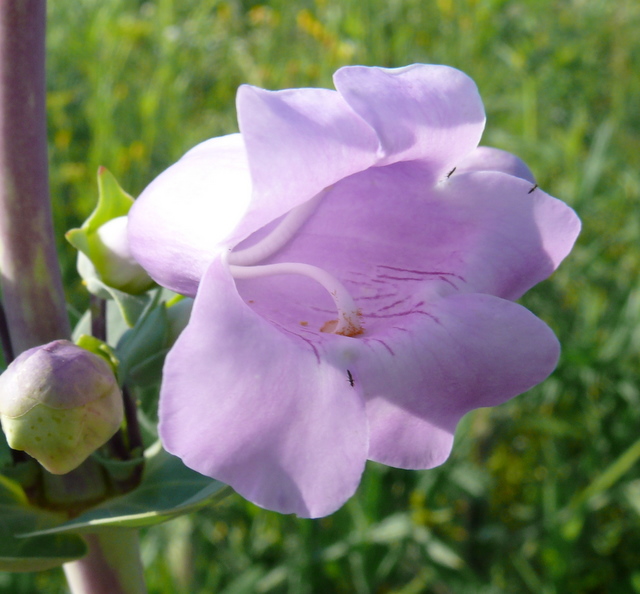 The middle section of the prairie – 3 years old now – is looking much better this year.  Lots of prairie flowers bloomed.  I don’t remember planting Blue Vervain (Verbena hastata) – it usually likes wetter soil.  But I had lots of seeds – it’s easy to collect in the wetland – so I must have decided that it would make a good “cover crop” until the prairie matures.  I think it will disappear as the dry-prairie plants mature.  In the meantime, it looks beautiful. 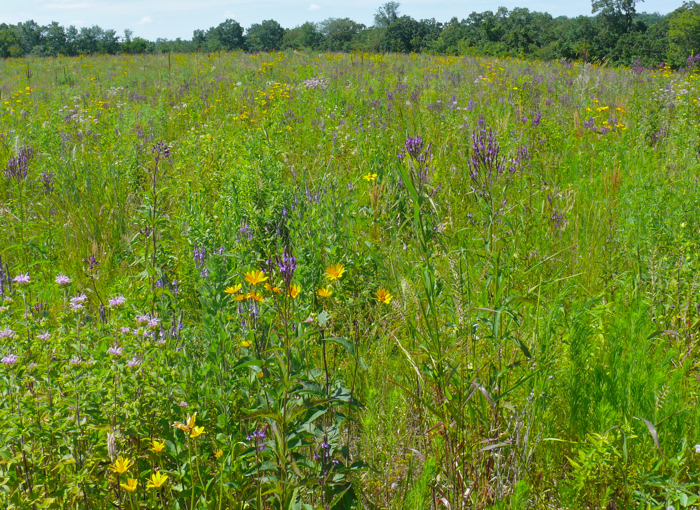 Another view of the middle section at the end of July.  Lots of prairie grasses and flowers.  It’s getting more difficult to see the line between the middle and the southern sections.  So it seems that after 3 years, the prairies get more stable. 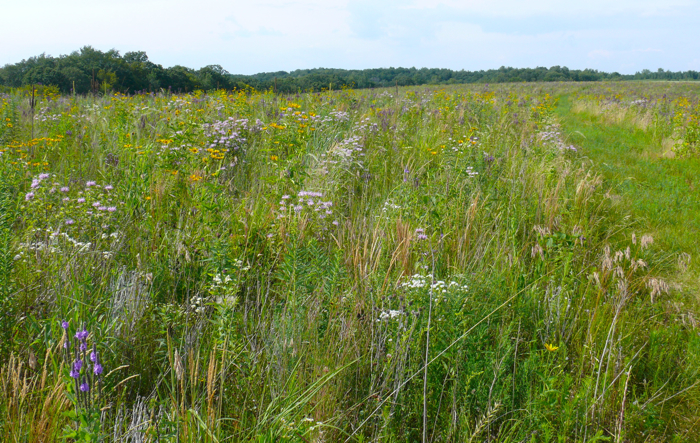 I replanted one part of the southern section – actually several times.  It’s at the very southern edge of the field, near the edge of Big View Prairie.  Mike’s theory is that it’s the place where the tractors always turned, so the soil is especially hard and compacted.  Nothing much seemed to grow there for several years.  Now there are grasses and Black-eyed Susans. 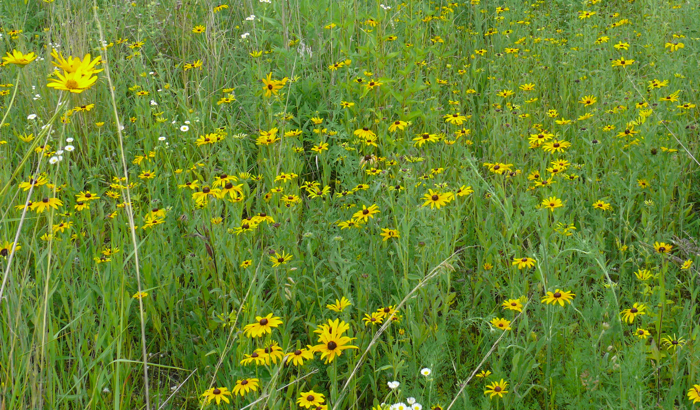 This is right at the top of the Dugway Road.  There’s a wonderful view of what feels like endless prairie. 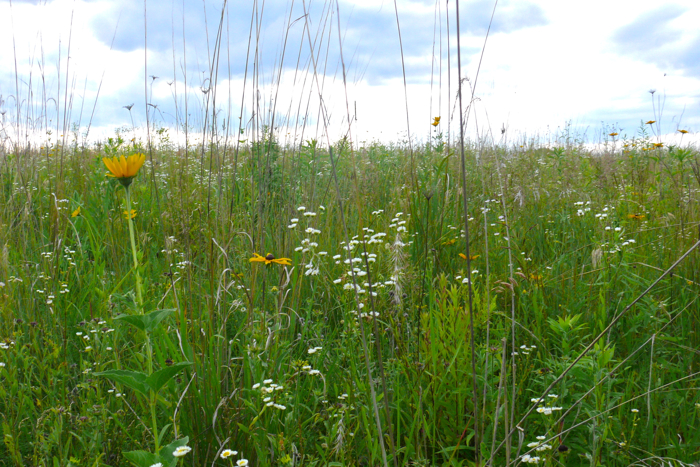 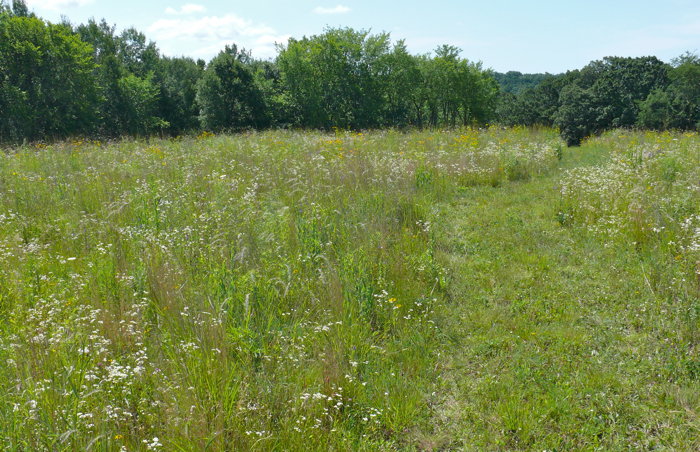 This is looking north, across the southern section.  There’s still a lot of Queen Anne’s Lace – I’m hoping it will disappear on its own as the prairie matures.  There’s certainly too much to weed by hand. 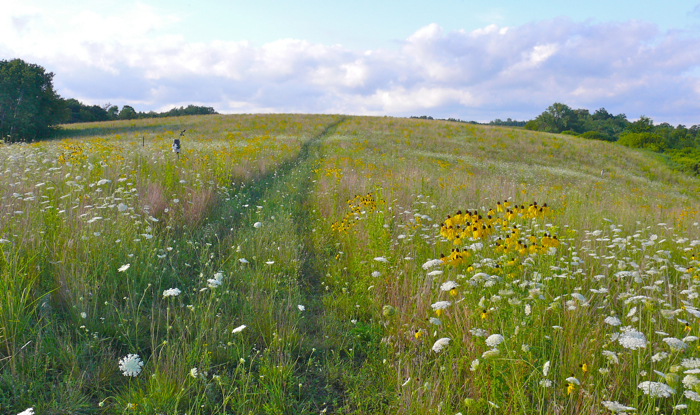 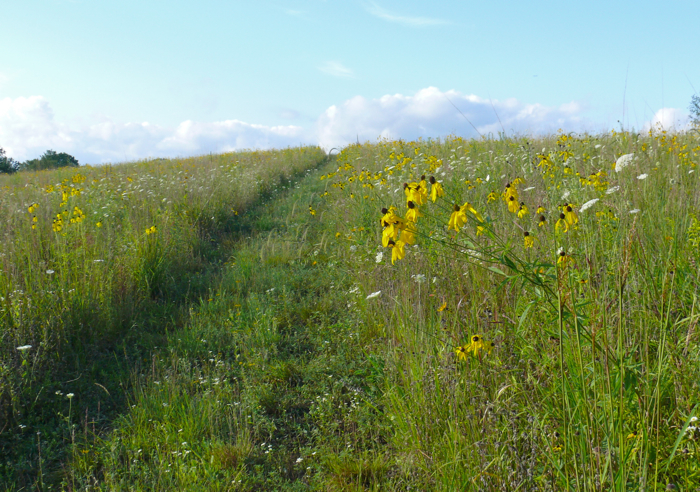 Some September asters, in the southern section 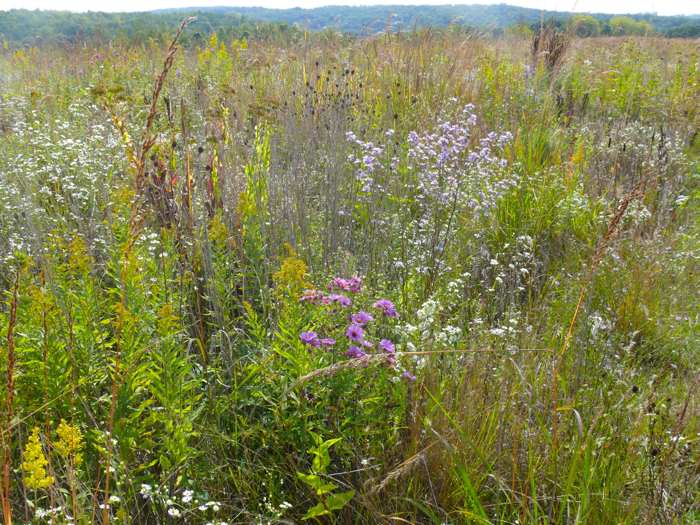 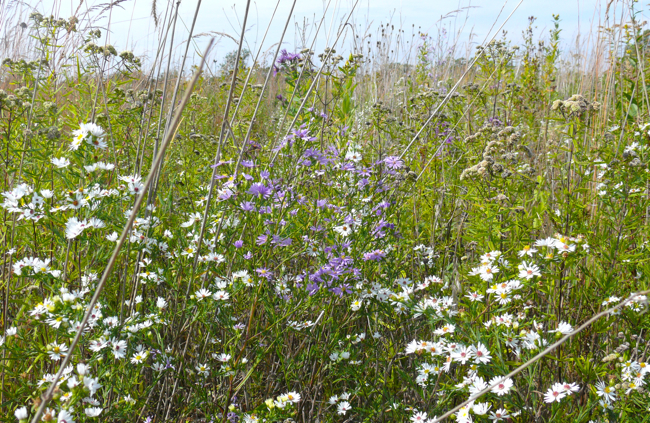 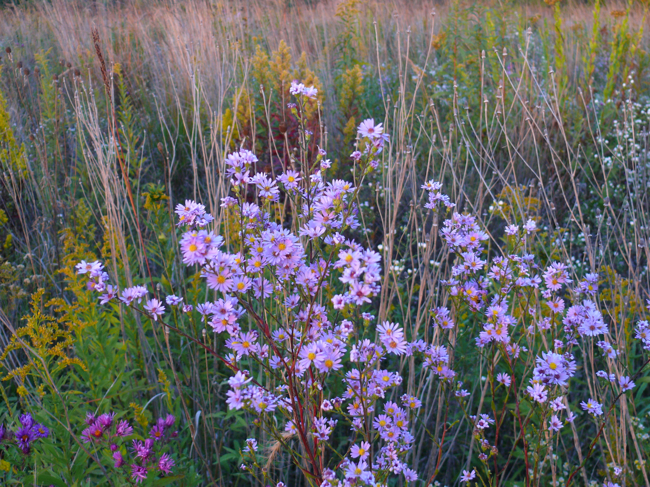 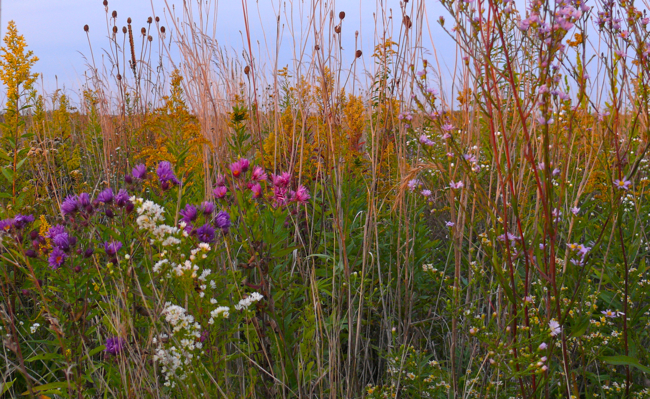 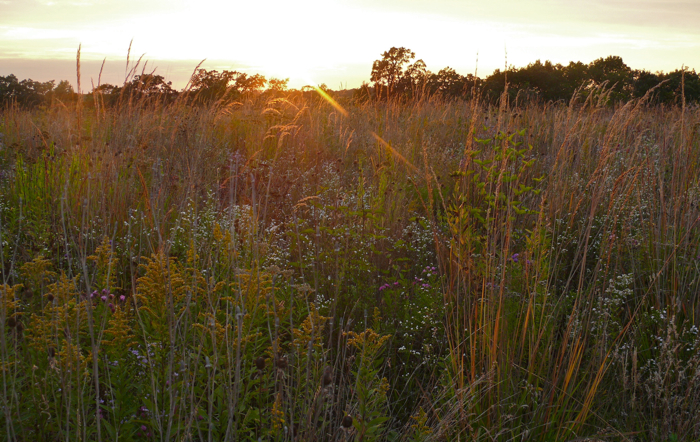 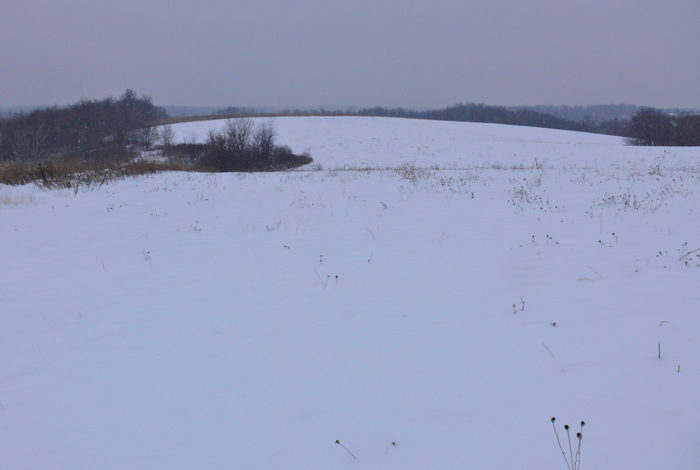