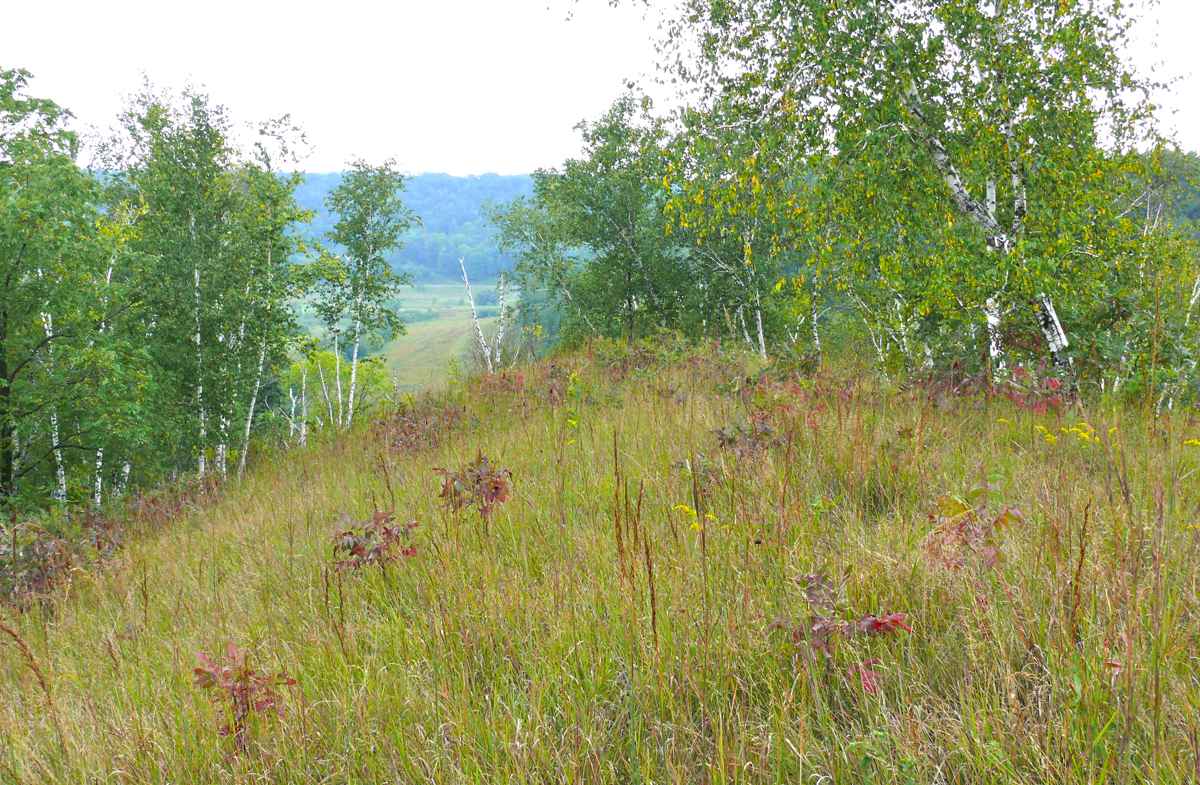 Indian Grass Point is the south facing point right above the house.  It’s a large remnant, with a bluff prairie on top.  The prairie reaches part way down the sides which face south east and west.  North of the prairie point is a large savanna area that we call Twisted Oak Savanna.  For a long time we included the stories about Twisted Oak Savanna in with Indian Grass Point.  But in 2017 we did a big restoration project there, and nearly doubled the size of the restored savanna – so we decided it deserved its own name and its own page.

This is an aerial view of the farm, showing Indian Grass Point and Twisted Oak Savanna. 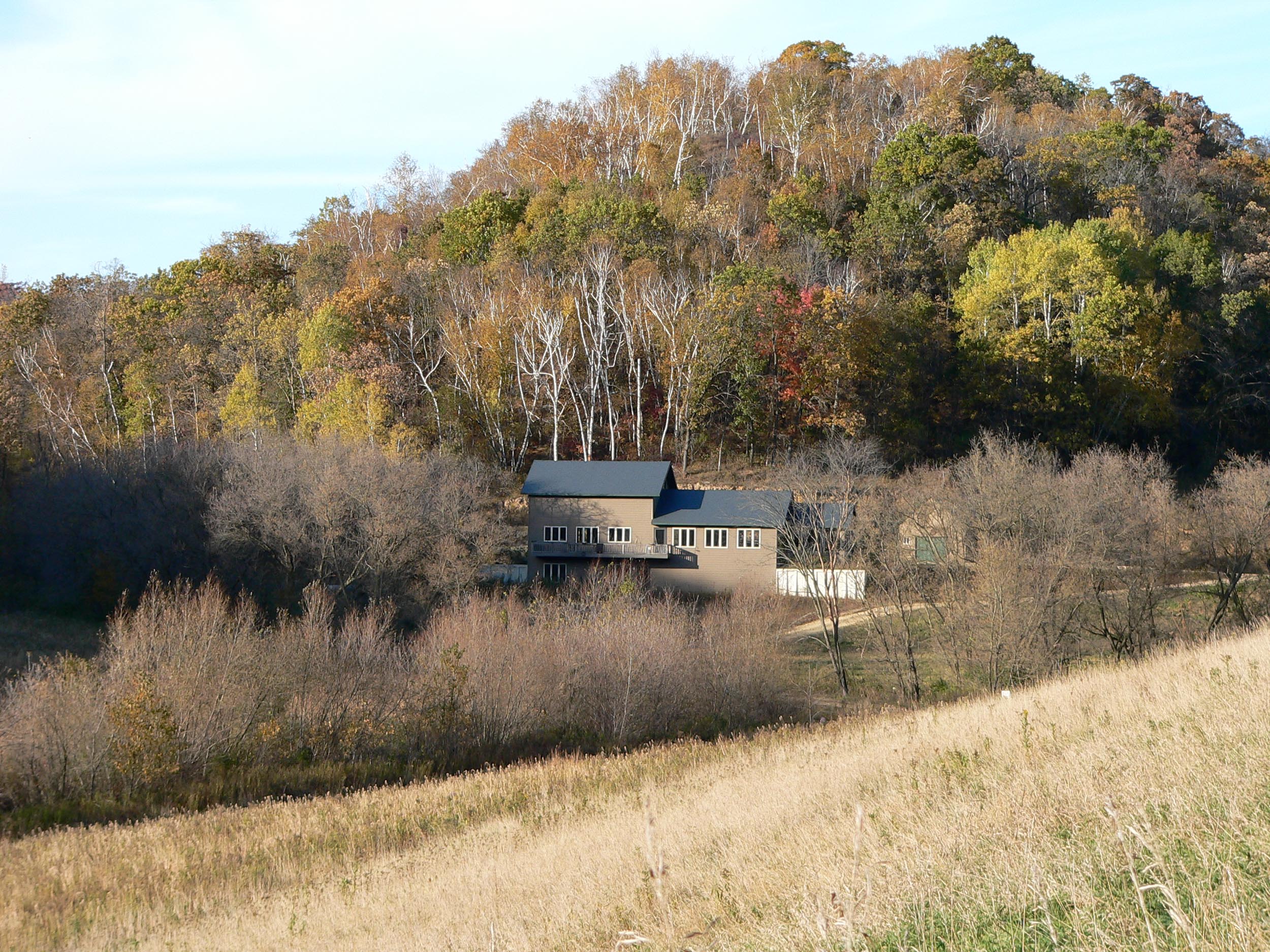 This is a drone photo of the point from May 2017.   The top of the point and sloping down to the east and west are dry prairie.  Below the prairie on those sides is woods, most of which is overgrown savanna.  The front of the point is an even more open savanna which we’ve been slowly clearing of brush and small trees. 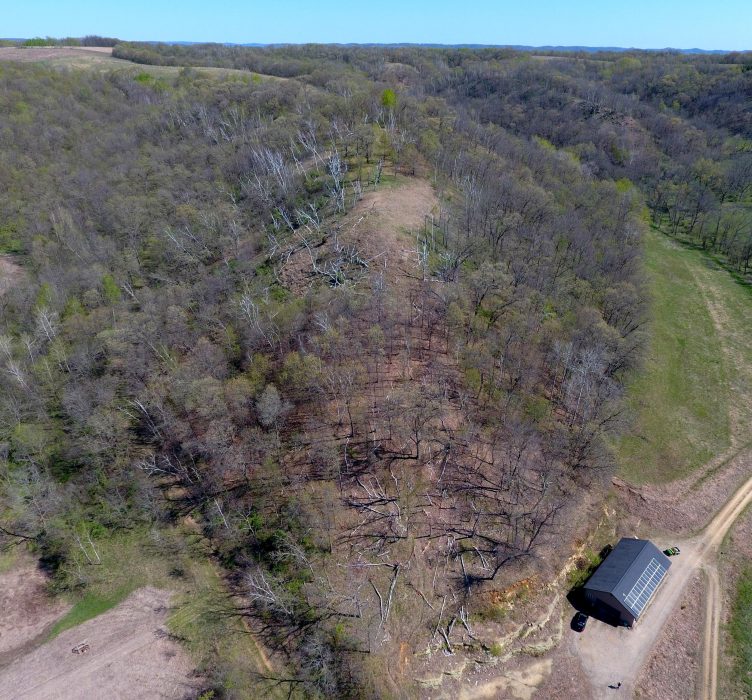 The top ridge of the east facing slope is the most prairie-like, with no trees, scattered sumacs, and dry prairie flowers and grasses.  We burned this area once, in spring of 2004. 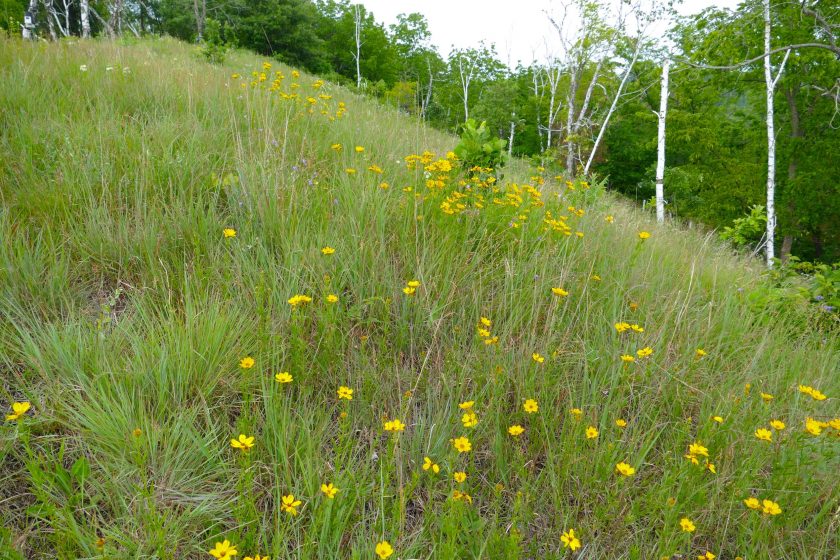 Below this east facing slope is savanna that we cleared of brush and small trees in the fall of 2016.  There are more trees – either aspens or ones that were too big for us to cut – that have been girdled, so this area will become even more open.  This photo is from June 2017. 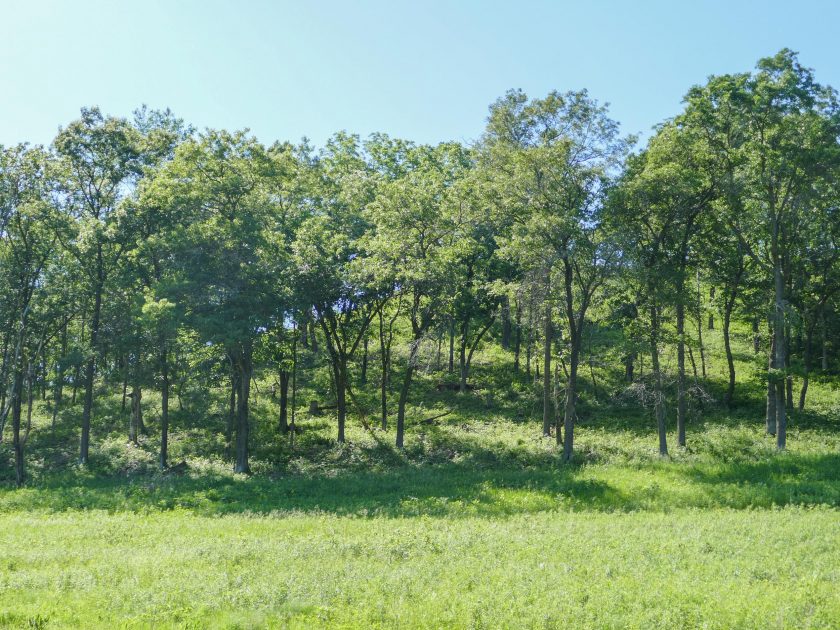 The west-facing slope is very steep.  Before we started work it had a grove of birches with prairie plants growing under them. 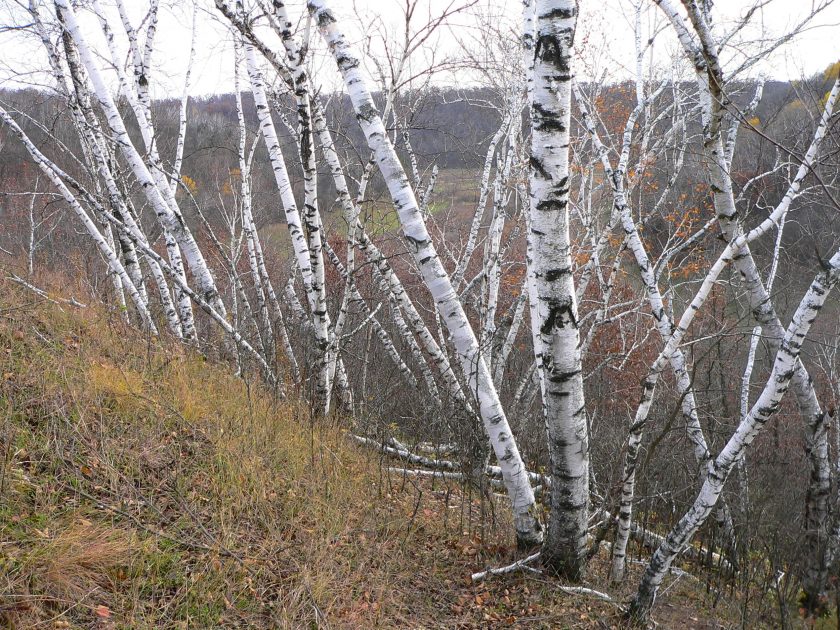 I girdled the birches, and I’ve been working to clear the brush growing underneath them.  This is that slope in May 2010. 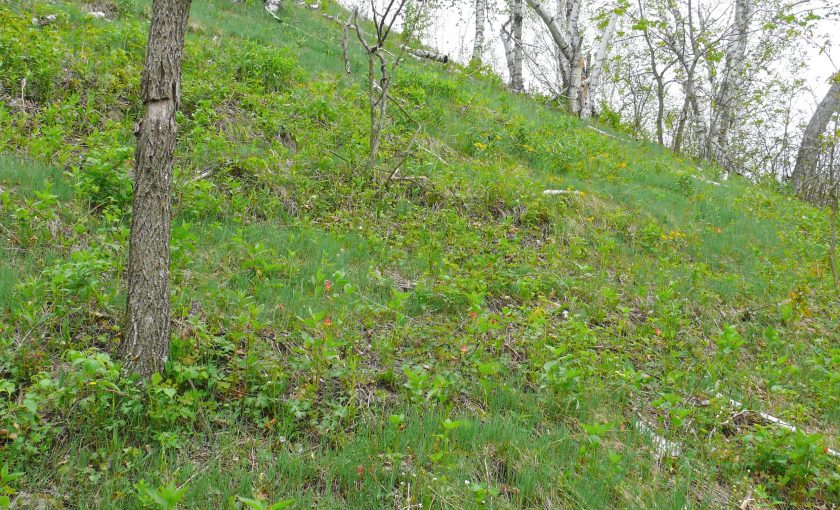 In the fall of 2015 we started clearing work on the front (south facing) side of the point.  We’re gradually cutting down and removing the brush and smaller trees.  This shows it in May 2020 with blooming Wood Betony. 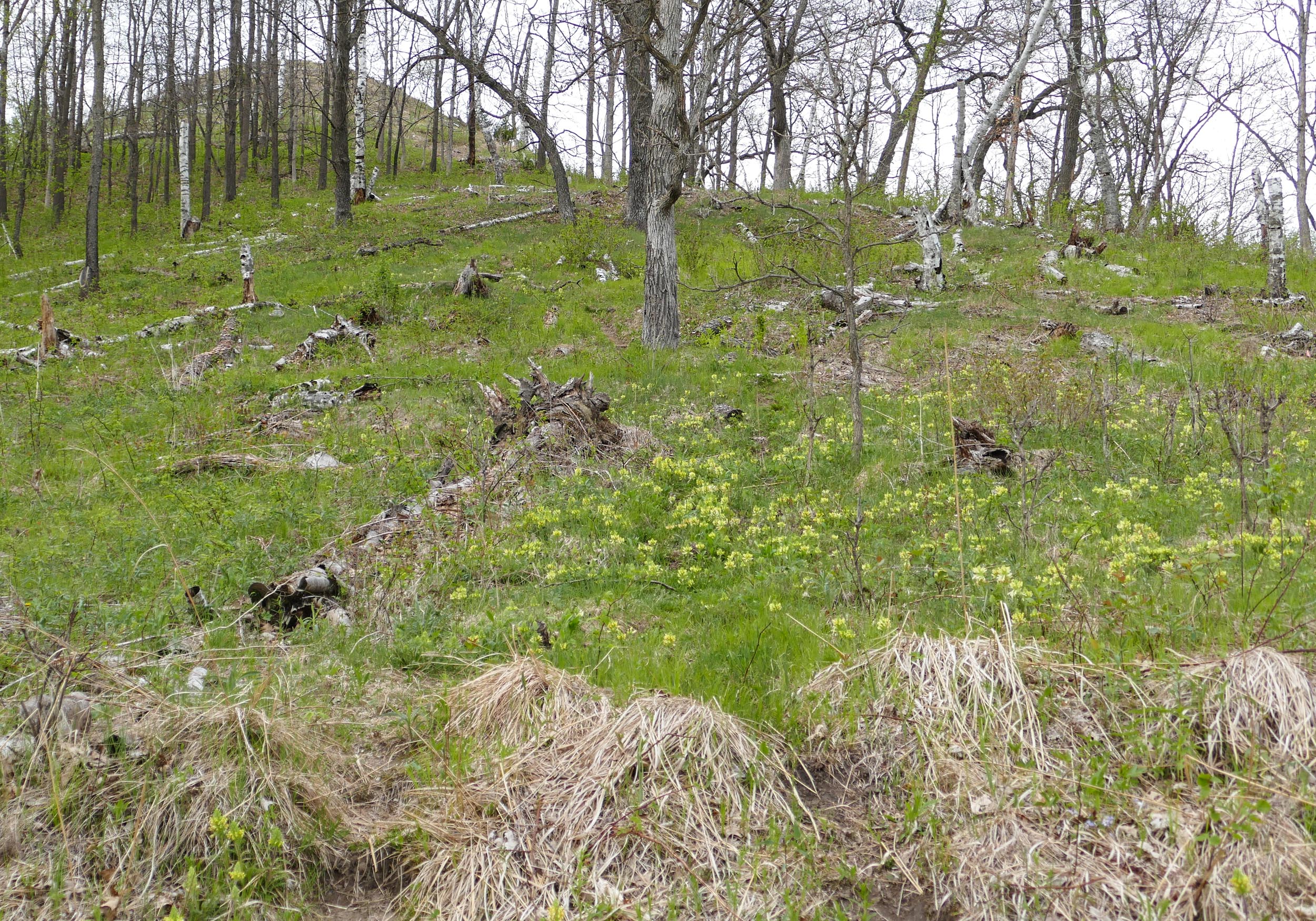 8/1/2004   North of the prairie, on the wider, flatter part of the point, is Twisted Oak Savanna.  This is looking along the path, through the woods, into the savanna – still very overgrown 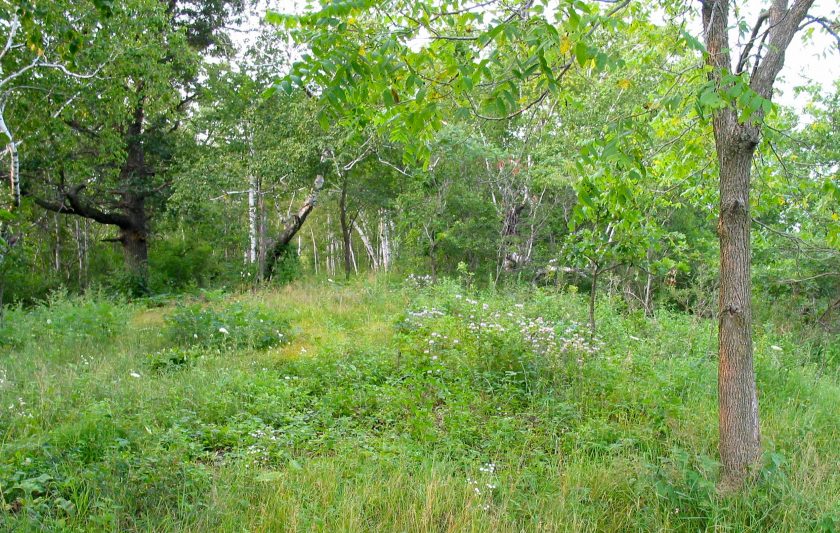 Here’s a view of the same spot in September 2020 after much clearing work. 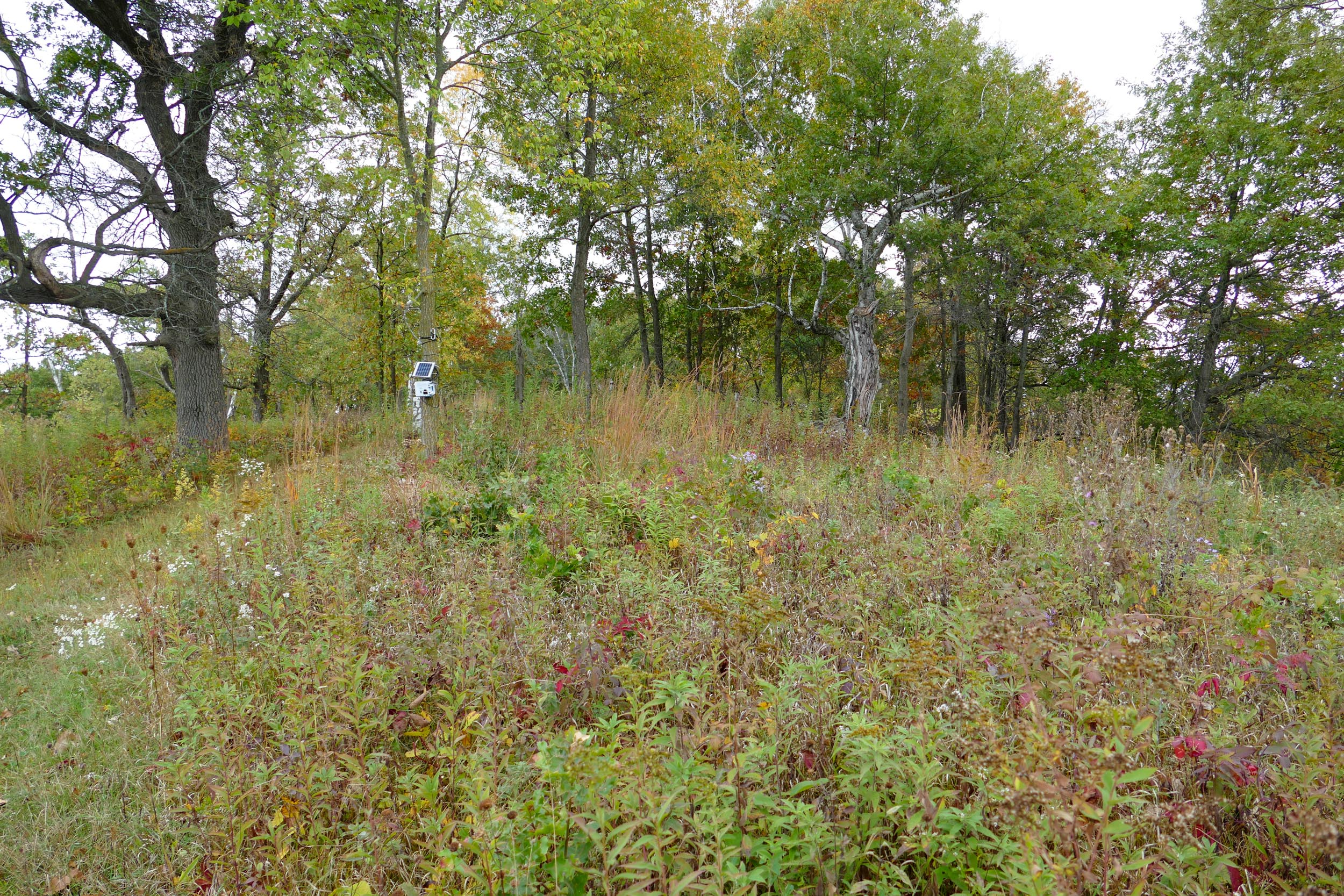 Click Here to see ‘before and after’ comparison photos of some places on Indian Grass Point.

Click Here for a list of plants I’ve found growing on the prairie point and the surrounding remnant savannas.