The Knife Edge is a long narrow ridge that runs north and south along the eastern edge of our property.

This is a drone photo of the northern, flatter part of the ridge, with the narrow point leading off (south) to the right.

Another drone photo showing the south facing point at the end of the narrow part of the ridge.  The ridges on the west-facing slope are the paths made by grazing cows.  The land north of this was all grazing land when it was a dairy farm, so this may have been the cows’ route home to the barn. 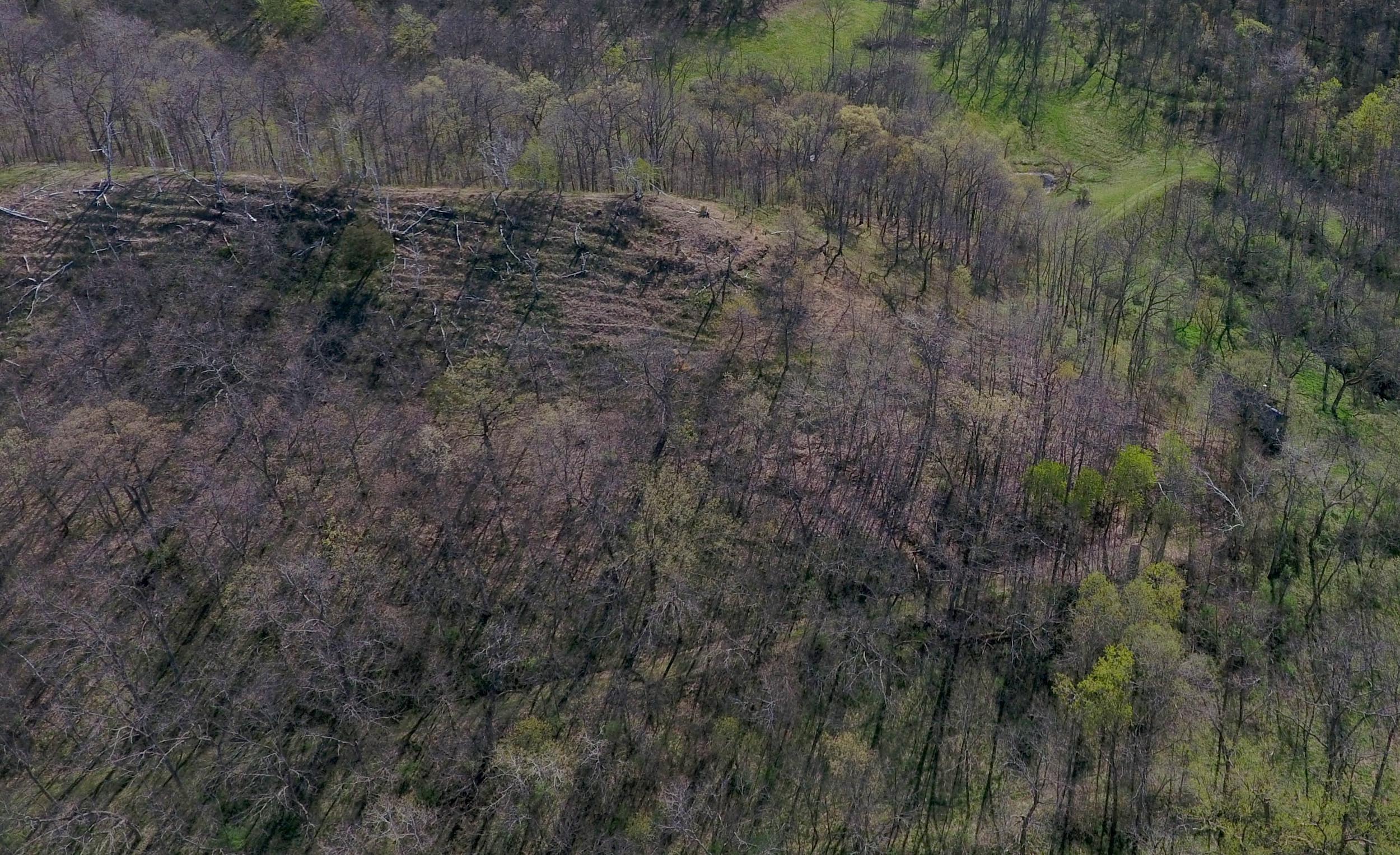 Here’s an aerial photo of our land with the Knife Edge marked. 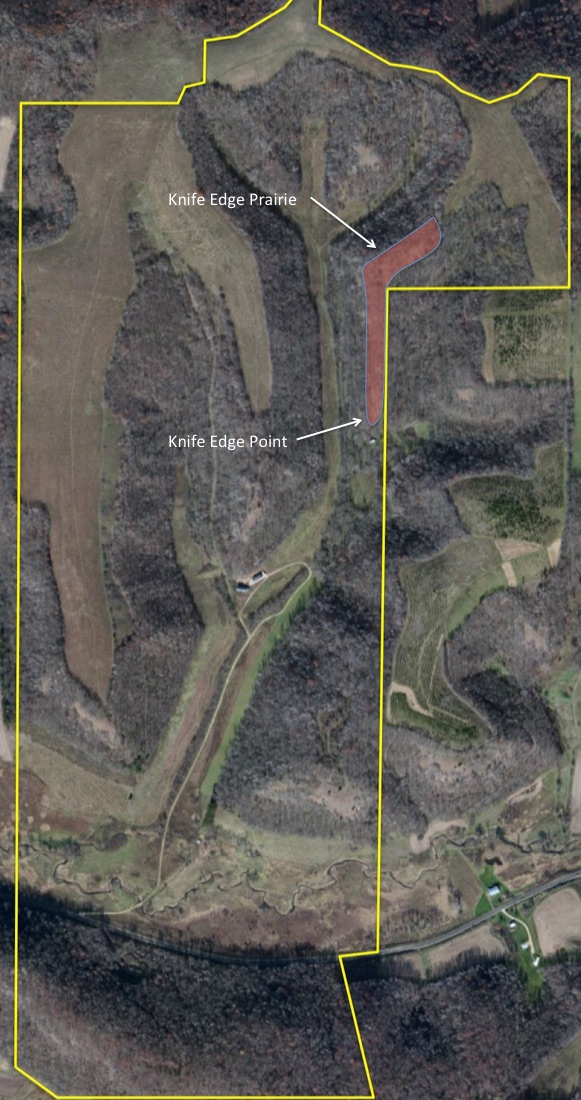 The northern edge of the ridge is broad and flat, and was never plowed.   When we first saw it, in 2000, there was a small open area with dry prairie plants, and the rest was a tangle of brush and small trees.  This was taken before we had done any restoration – probably in the summer of 2000. 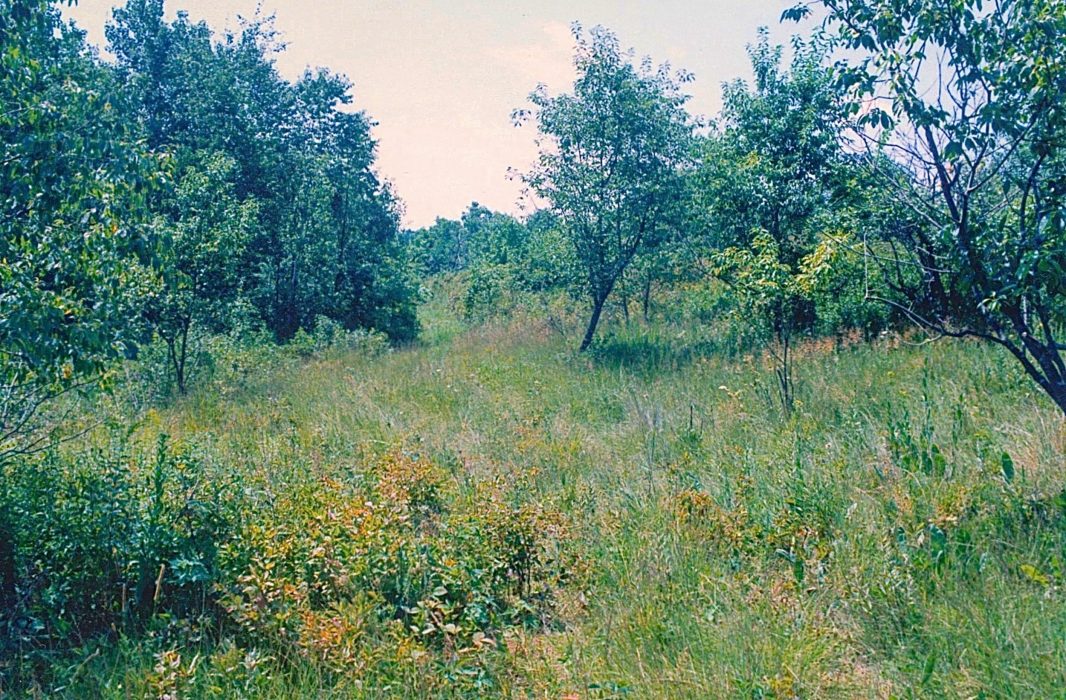 Since then we’ve mowed it every spring, and used the mowing to push the edges out farther every year.  Here’s this same area in August 2015.  We call it the Knife Edge Prairie. 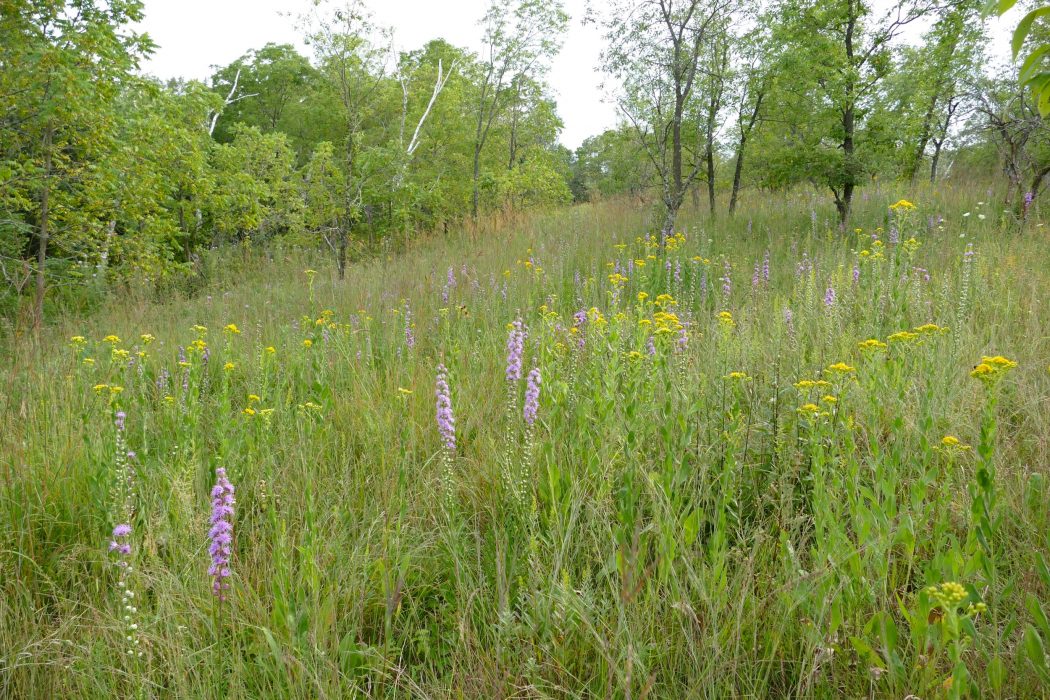 I saw Leonard’s Skippers here, nectaring on Blazing Star, for many years, but in the last few years I haven’t seen any. 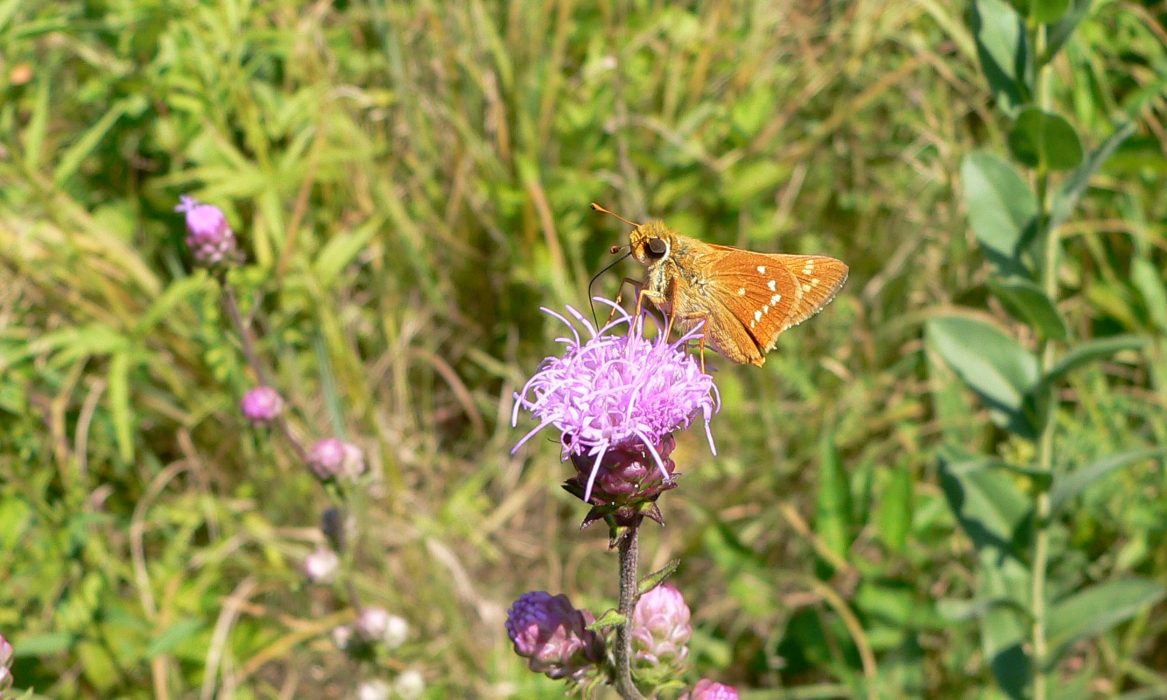 In the fall of 2017 we finally got around to cutting down some of the small trees that were sprinkled through the prairie.  Most were Black Cherry and Apple.  That winter, a friend did more cutting for us, taking down most of the trees that were invading from the edges.  Now the prairie is open all the way out to a circle of old, open-grown oaks.

This was taken in December 2017, after Mike and I had finished cutting and removing the trees in the middle. 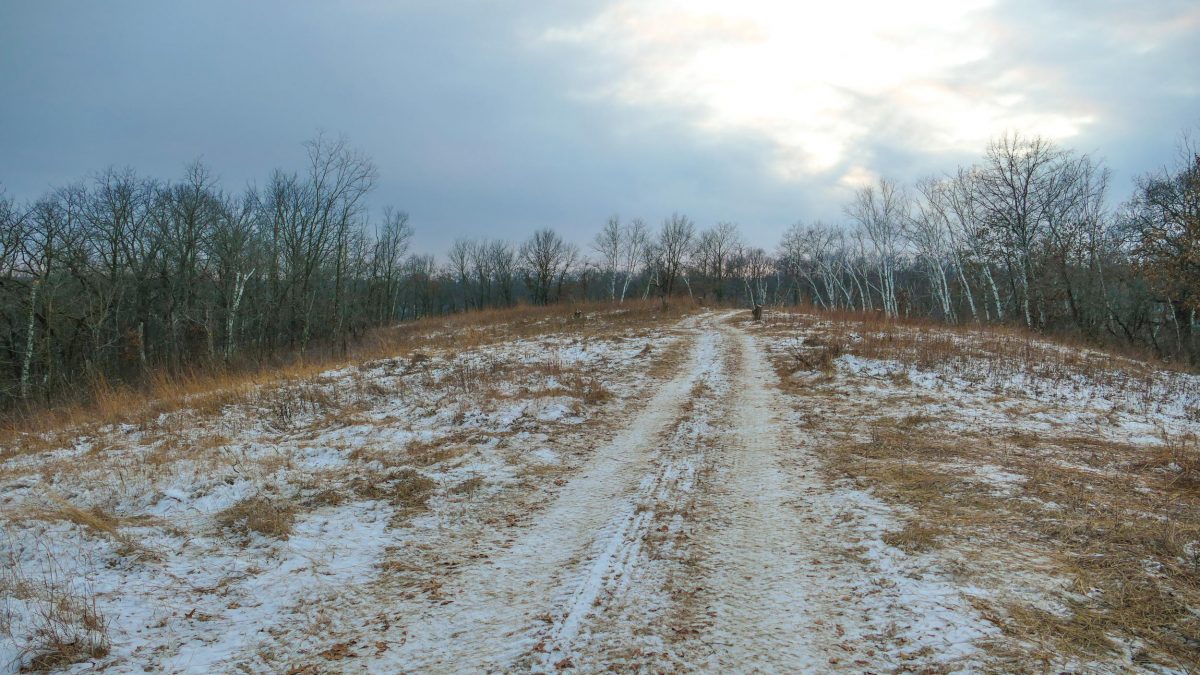 This is from September 2020.  The prairie has recovered from removal of the trees, and it now looks much more like a prairie. 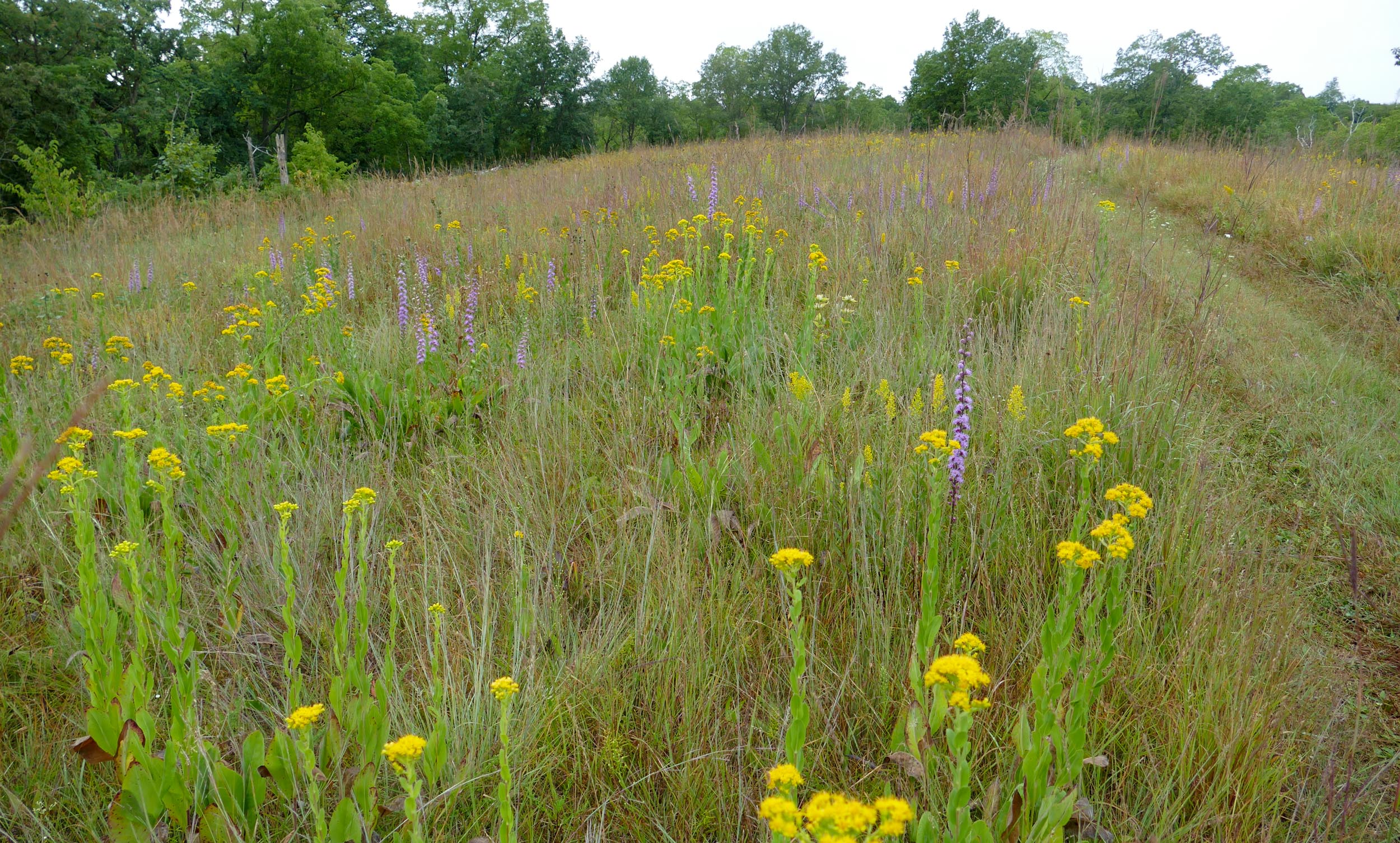 South of the prairie area the ridge gets very narrow and the path runs along the top, with steep slopes on both sides.  The east-facing slope belongs to our neighbor and is thick woods with Burr Oak, Elm, Black Walnut, Aspen, and Hackberry.  The top path and the west-facing slope are ours, and have prairie plants growing under birches and other invading trees. 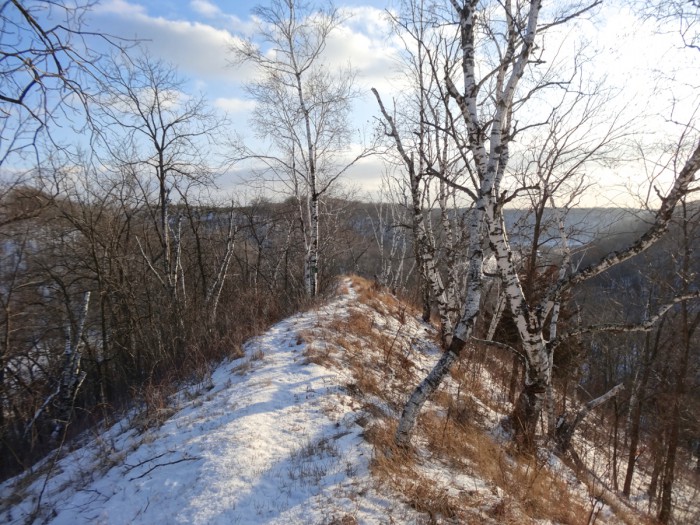 There’s a large clump of Butterflyweed along the path. 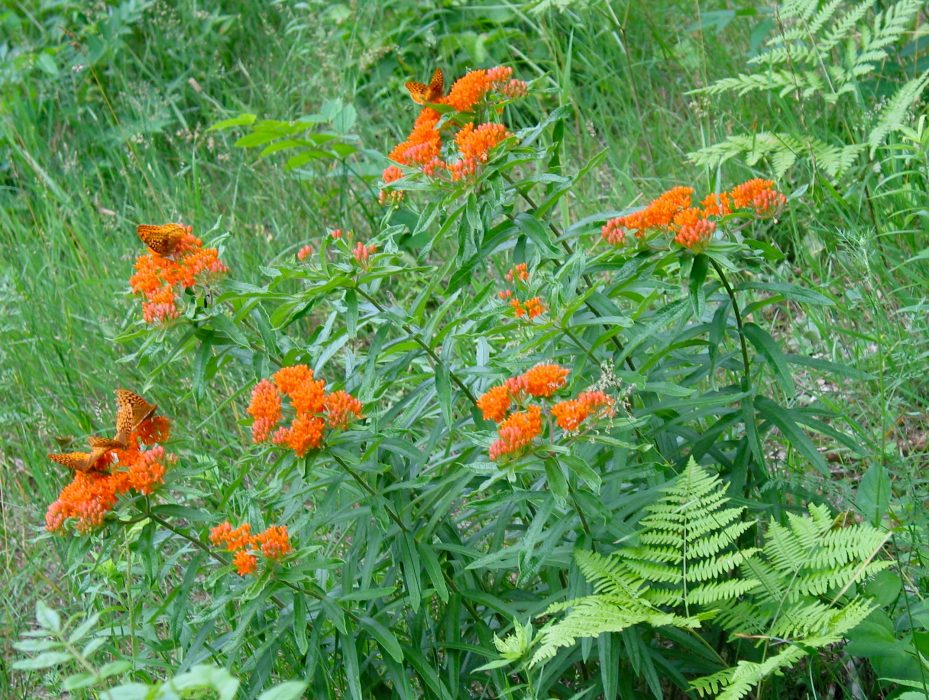 The west-facing slope is dry prairie overgrown with birch, sumac, black walnut, honeysuckle, prickly ash and wild grape.  This shows one of the places where I’ve been clearing out the thicket of invaders.  There are still prairie plants growing under the brush – in this case, Gray Goldenrod was still blooming even in the thick shade. 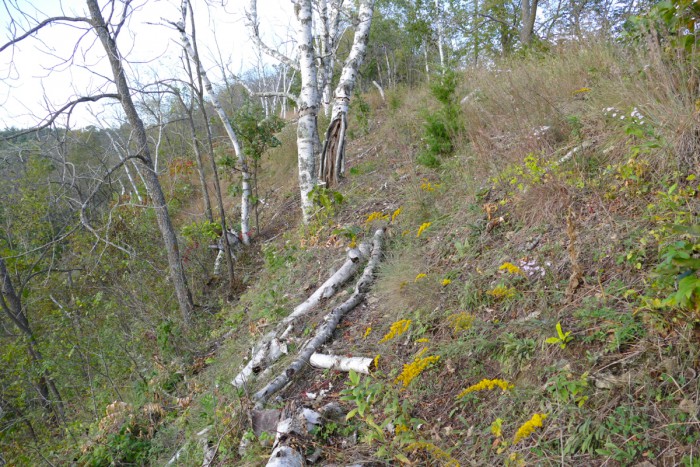 To the south the ridge ends in a steep, rocky point with big patches of bare sand.  We call this the Knife Edge Point.   At first the point had a thick growth of birches and aspen. 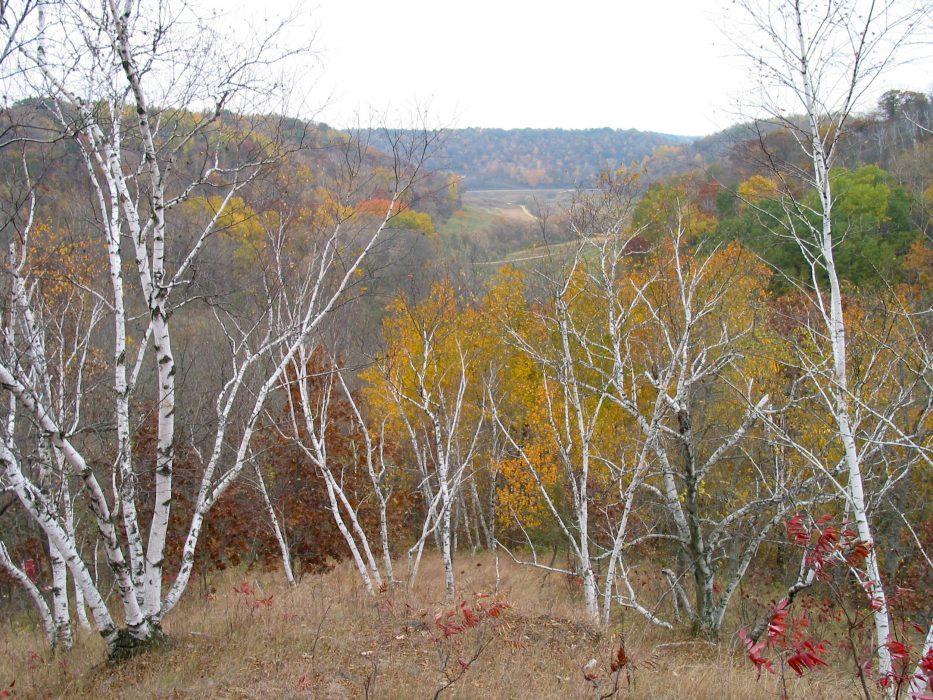 We’ve been slowly girdling and clearing away the trees, leaving just the oaks. 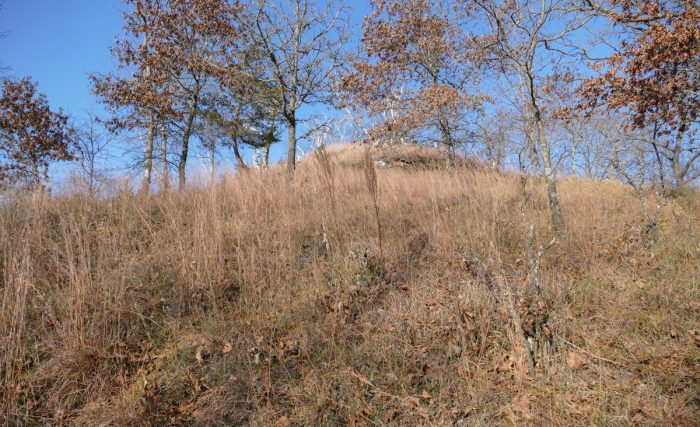 The point slopes down into an open woods of birch , aspen, walnut and oak.  I’m trying to get rid of the non-oaks and bring back the savanna.  Prairie/savanna plants grow under the trees. 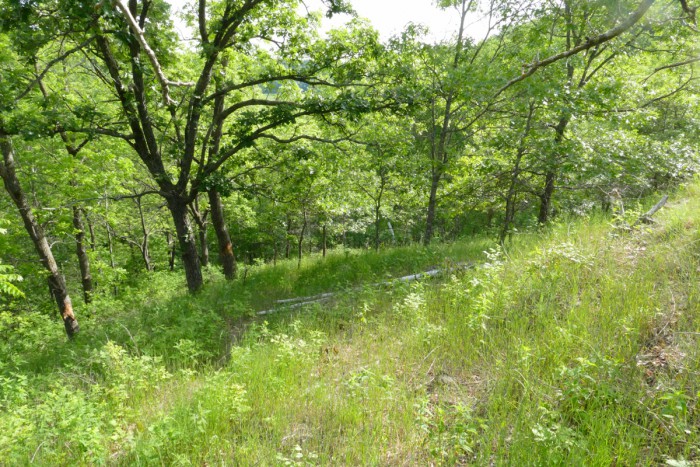 Click Here for a list of all the native plants I’ve found growing on the Knife Edge prairie and savanna.