These moths make bags out of found materials.  I’ve found these tiny bags mostly on tree trunks.  The head of the larvae sticks out the top of the bag, as they slowly inch their way along.

“The caterpillars of the bagworm moths feed on lichens. Although they are most common on trees, they are found on the sides of buildings, especially any building that might support a growth of lichens. The larvae pupate inside the bag in mid-April and the adult moths come out of the bag, and remain on the bag to lay their eggs, depositing them into the bag through the sides. The adults don’t feed and probably only live three or four days. Once the eggs hatch, the larvae vacate the parent’s bag and create their own bag. The population in North America is parthenogenic, that is there are no males in the population, and the females produce viable eggs without ever mating. In Europe there are both parthenogenic populations and populations that reproduce sexually. The males in the latter populations have functional wings.” — from the Royal Alberta Museum web page on Bug Facts

They are originally from Europe, and were found first in Canada in 1941. 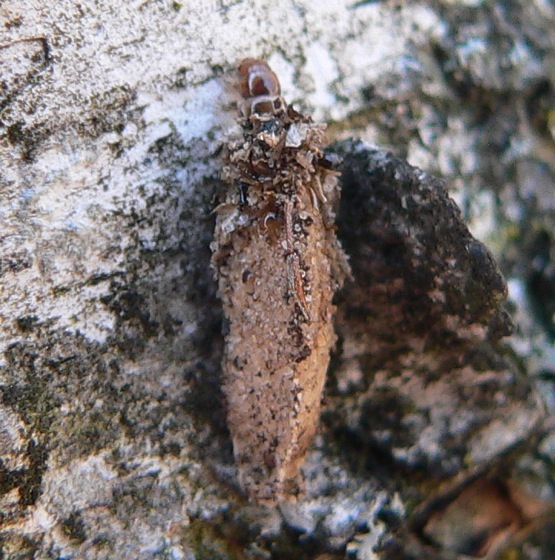