Mowing has been a useful technique for us – it doesn’t kill many weeds, but it discourages them, so they have a harder time competing with prairie plants.  It’s fast – Mike can mow large areas in a few hours.  It can be done at different times of the year to get different results, and in combination with other restoration techniques.

Planted Prairies:
We mow our planted prairies frequently for the first year or two – every 3 or 4 weeks for the first year, and once or twice the second year.  This keeps the annual weeds from making so many seeds, and lets in more sun to the prairie seedlings.

This is a second year mowing of a planted prairie.  In this case we were mowing mostly to control Canadian Horseweed (Conyza canadensis). 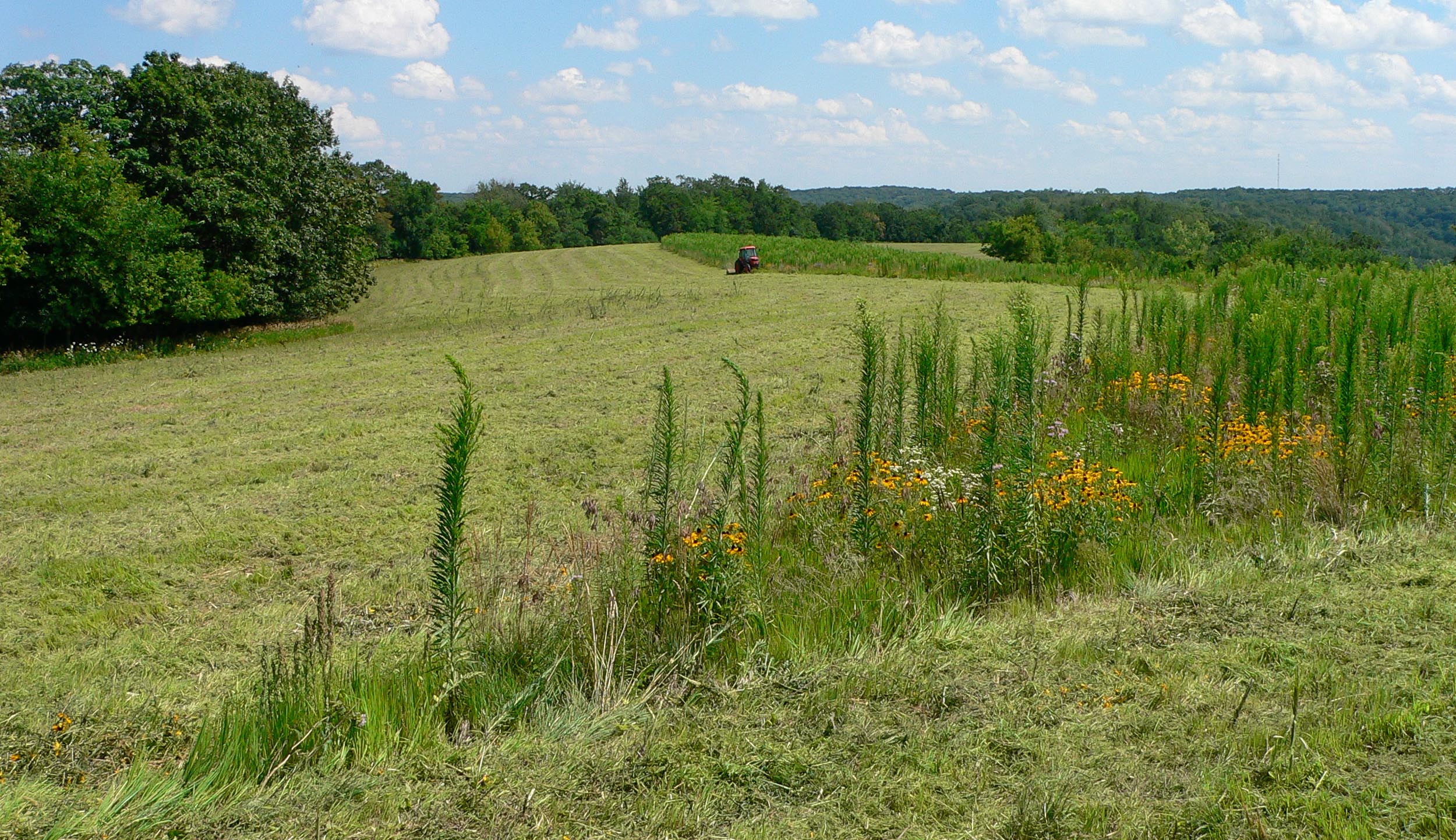 After the second year, we mow to control woody invaders or persistent weeds.

This is a planted prairie with an aspen problem.  There are mature aspens along both edges which send up shoots throughout the prairie.   I’ve killed the mature aspens along the south edge, but the ones along the north edge are on our neighbor’s property, so we can’t do anything about them.  So we mow the sprouts in the late summer every year.  Each year the sprouts get smaller, but they never go away.  Mike tries to mow only the areas with aspen sprouts – leaving unmowed places as refuges for insects and food for birds. 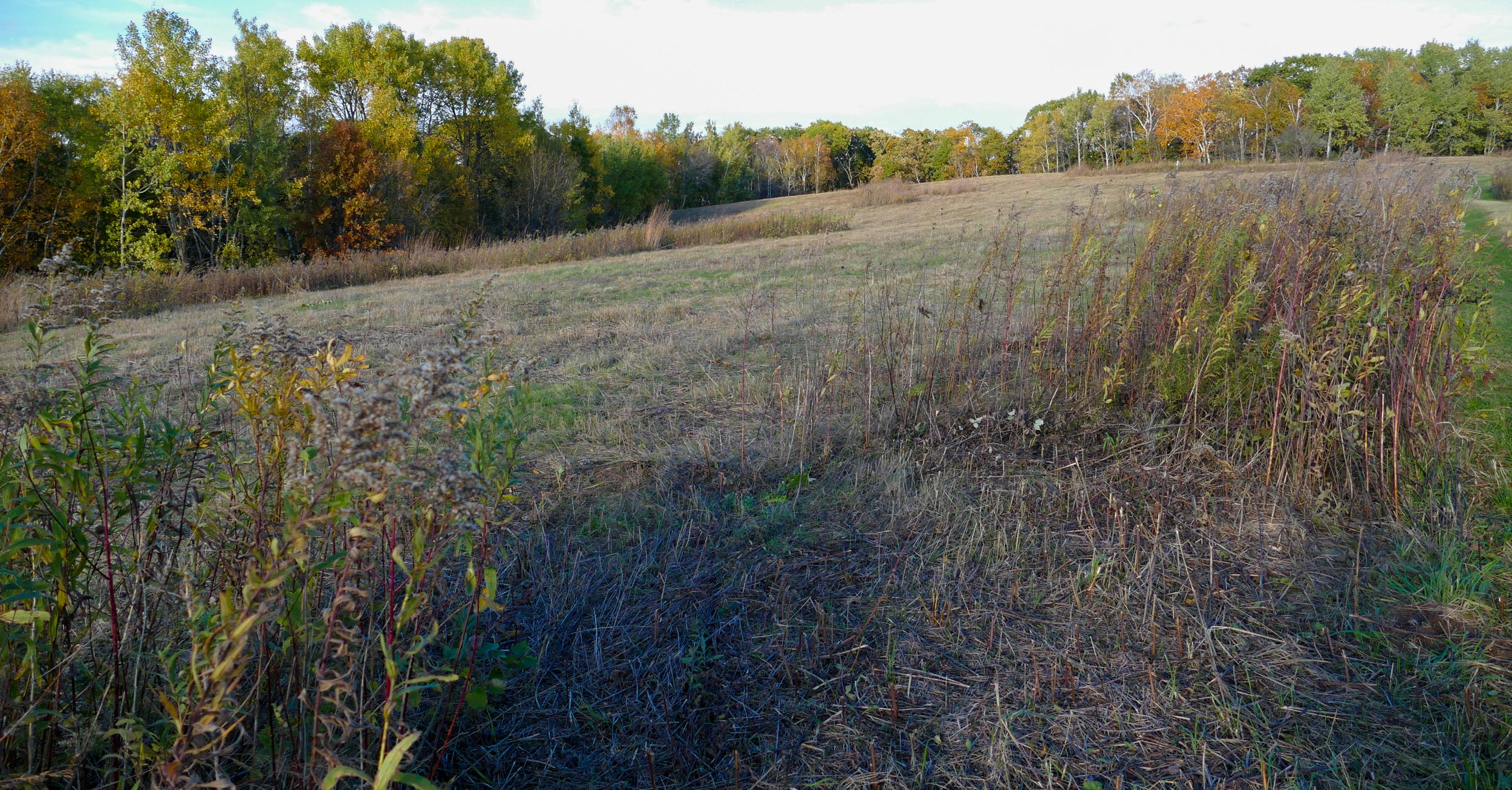 Remnant Prairies:
Most of our remnant prairies are steep points and hillsides,  (too steep to mow), but we have two flat prairie areas that were never plowed.  We used mowing to help clear them of brush and small trees, and we have continued to mow them once a year, in the early spring, to keep the brush from coming back.

This is one of the flat prairie remnants in the summer of 2000 – before we’d done any restoration.

Mike mowed through thickets of Prickly Ash, Dogwood, and Trembling Aspen to enlarge the open area. 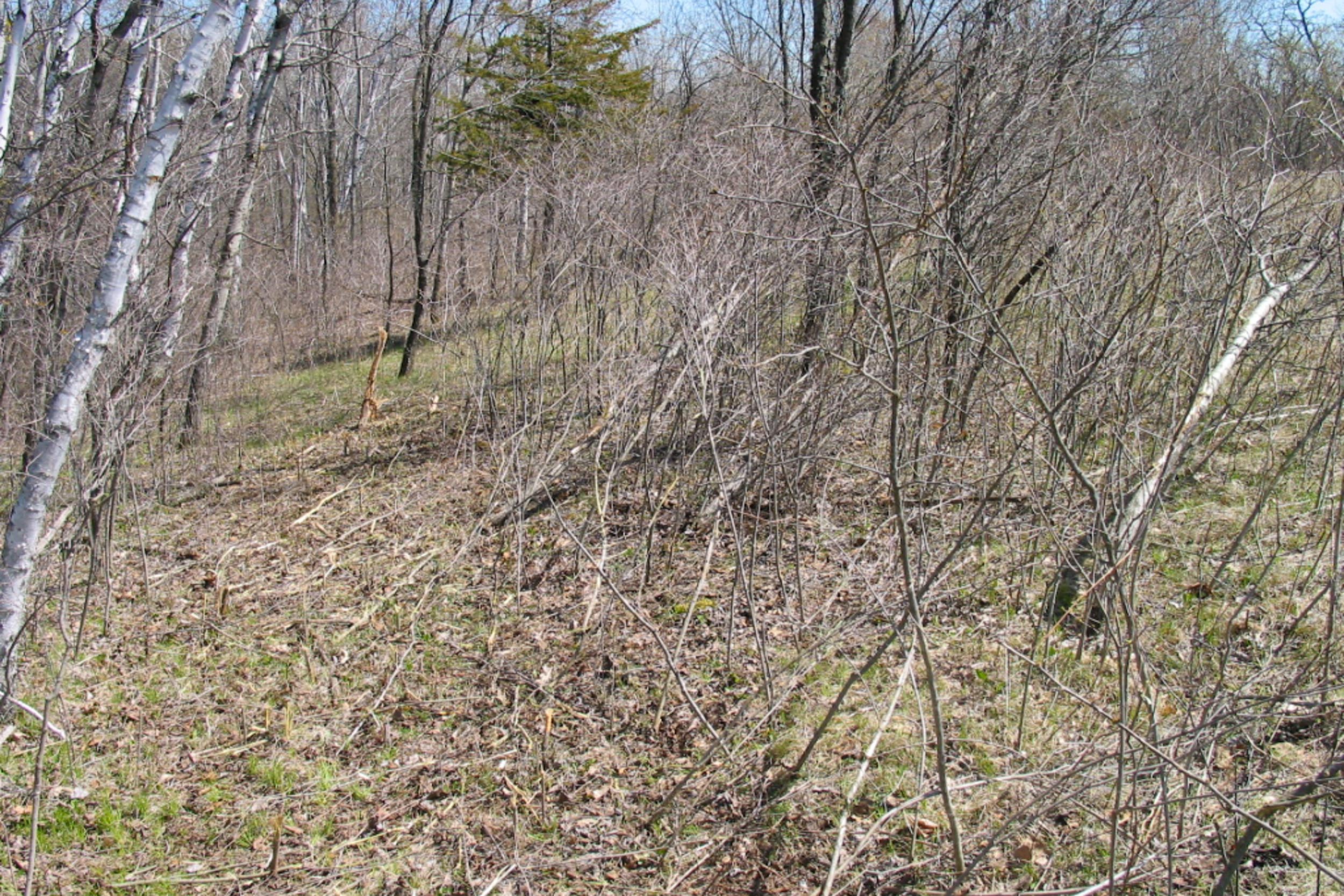 The yearly mowing helps keep the brush down, and the prairie plants have recovered. 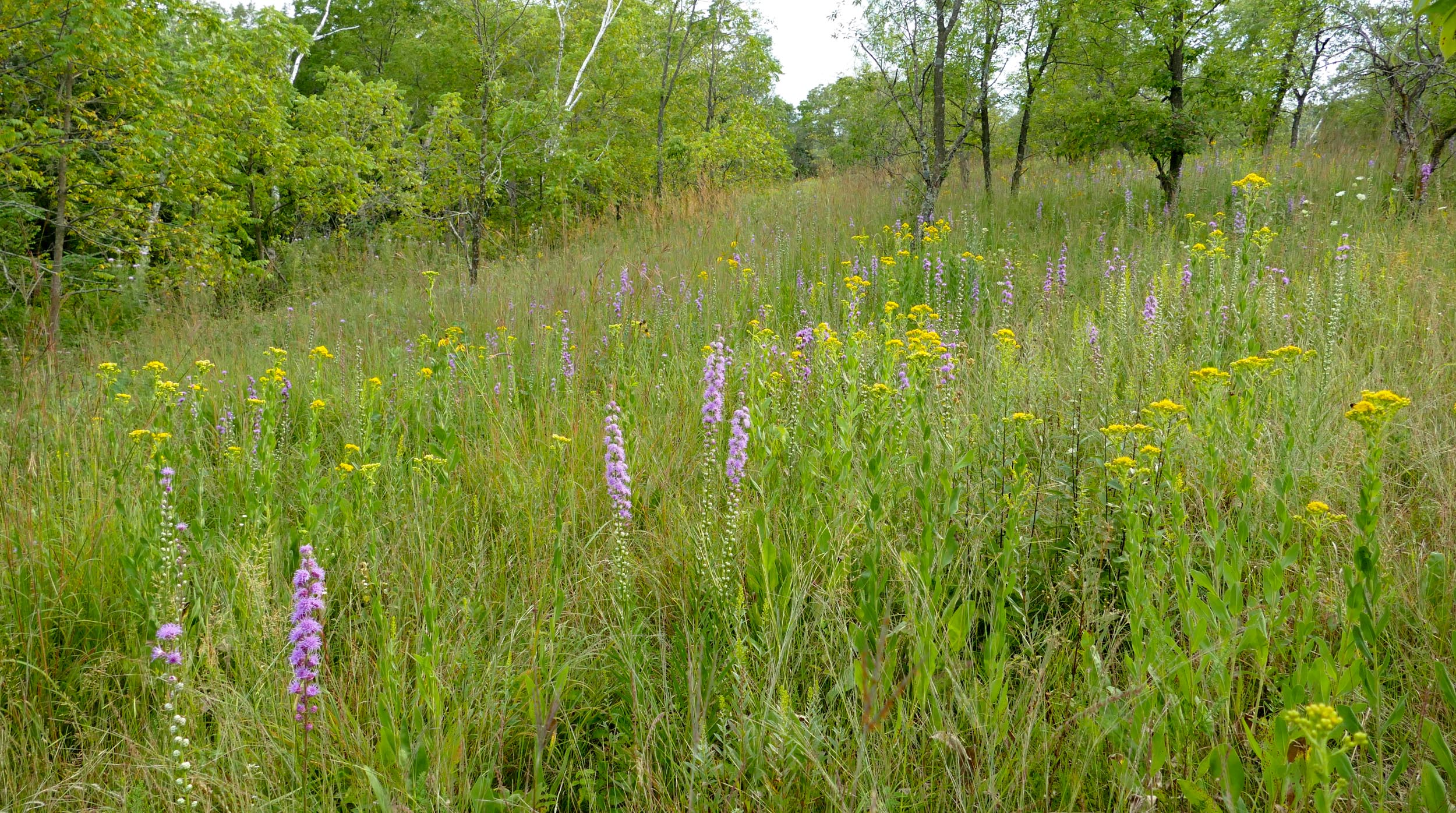 Remnant Savannas:
When we started doing savanna clearing projects, and the area was fairly flat, we would mow to remove the brush.  It was fast, and easy, and chopped up most of the plant material.  Here’s a hillside where we’re mowing out a thicket of prickly ash, honeysuckle and raspberries. 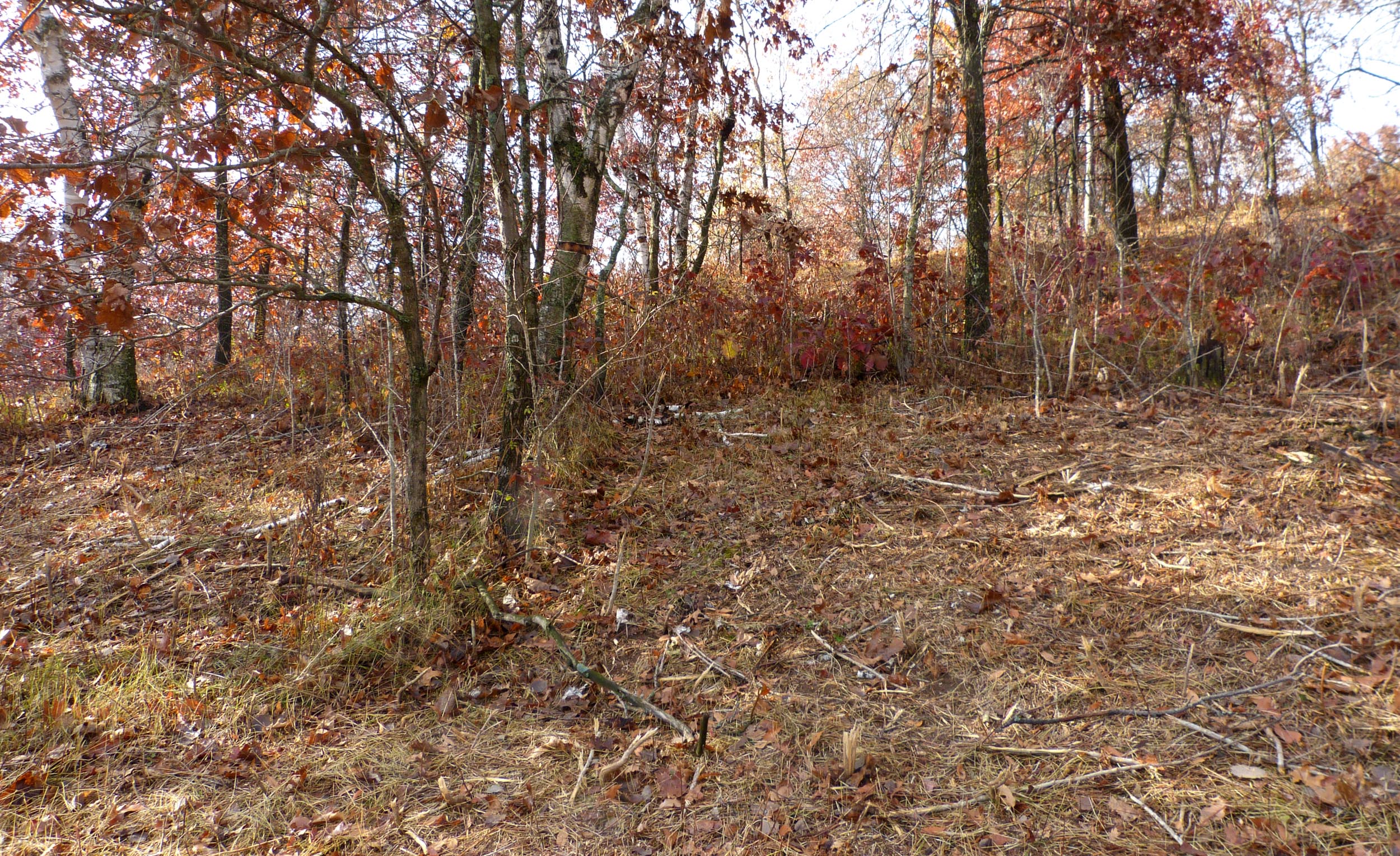 But because we didn’t treat the brush with herbicide, it came back in subsequent years, and the resprouts had more stems than the original plants.  Raspberries and Blackberries (Rubus sp.) are also not controlled by mowing, they actually come back stronger after mowing – maybe because there’s more light and less competition.  So over the next few years, I had a lot of hand work to do – cutting and treating the plants that came back.

In our more recent clearing projects, we do most of the initial removal by hand – with chainsaws and hand clippers – so we can treat the cut stumps.  Mike does most of the trees, with a chainsaw.  I do the small trees, brush, and as many raspberries as I have patience for.   There are still some plants that come back, either from stems we missed, or from seeds that were in the soil, but there aren’t nearly as many.

We mow these areas once a year, to further discourage returning brush.  We mow as early in the spring as we can – as soon as the snow is gone and the ground is dry.

This is a cleared savanna just after spring mowing.

A summer view of the same area. 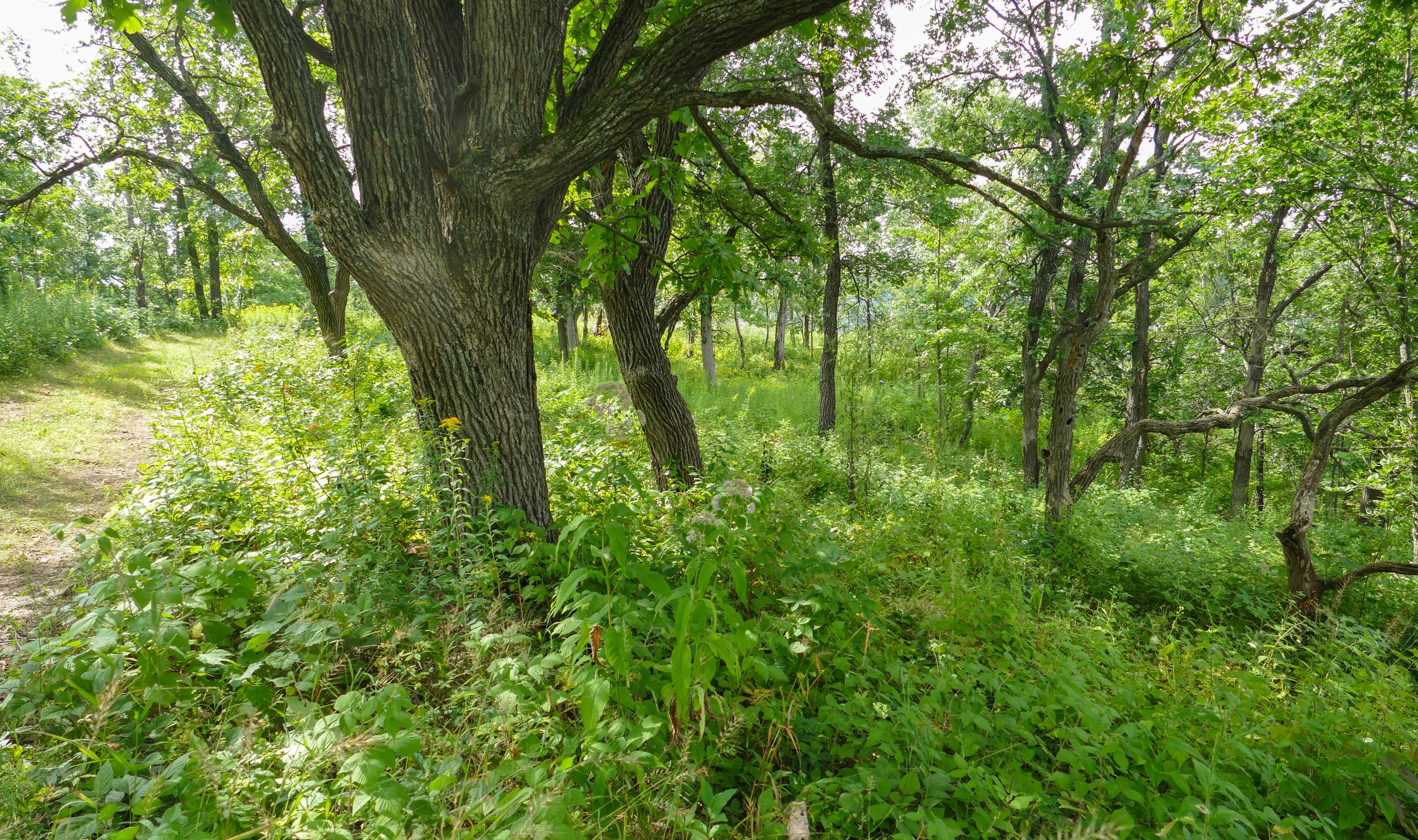 Mowing for Canada Goldenrod control:
Scott Weber, of Bluestem Farm has suggested that a good way to control Canada Goldenrod is to mow it just before it flowers for a year or two.  We’ve been trying it for a few years, in a few places, and so far those places are looking better.

A few years ago this area had only Canada Goldenrod blooming.  Last year we mowed it, just before the goldenrod flowered.  It’s much improved this year, so we mowed some other nearby goldenrod spots. 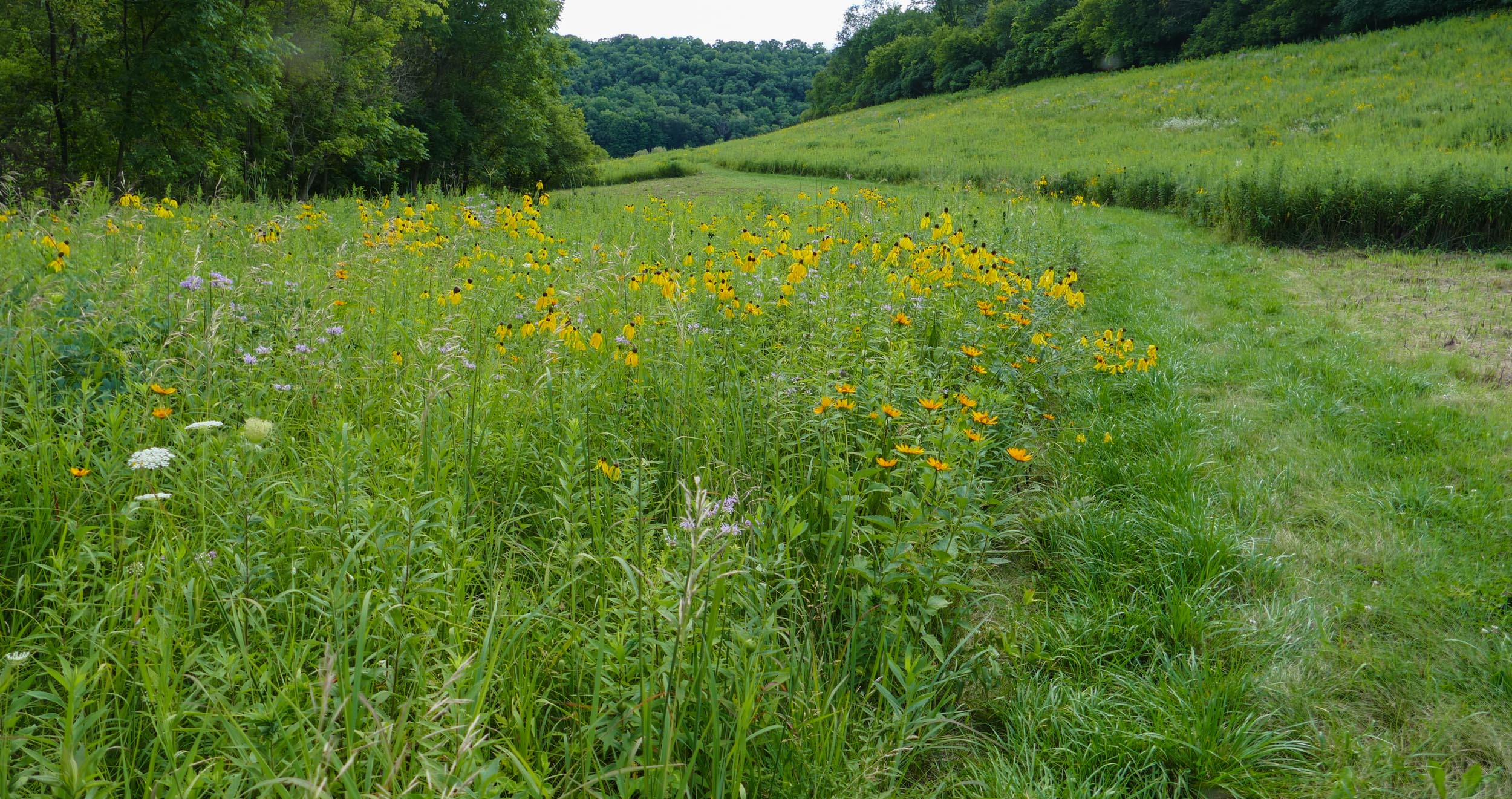