There are so many things going on right now that I’m having trouble keeping up with the blog.

Martha came down again to help with the aspen girdling. We worked on the hillside below Hidden Oaks Prairie. It’s fun to work in areas where I don’t walk very often – I always find interesting plants. One of the plants growing there, under the dense shade of aspens and prickly ash, is Violet Wood Sorrel – which is really a prairie/savanna plant. It should be much happier when the trees are gone.

There are lots of savanna plants growing on Hidden Oaks Point this year, in the area that we’ve been working to clear. At the top there’s Hoary Puccoon and Blue Eyed Grass, and farther down there’s a huge patch of Robin’s Plantain. The Robin’s Plantain was being visited by very small bright colored bees. 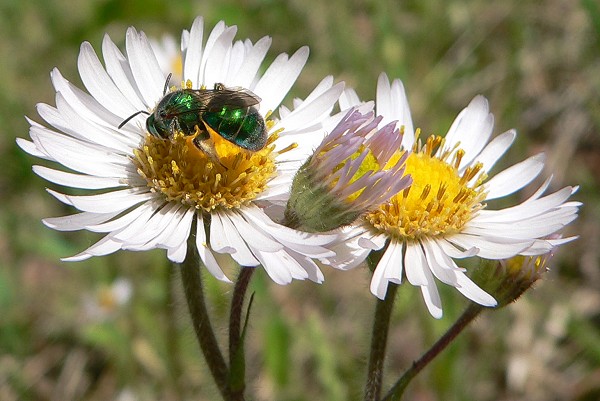 I saw several Gorgone Checkerspots on the way up Hidden Oaks Point. This one was guarding a territory in the middle of the point. He was chasing all the other butterflies away – even a monarch that was at least double his size. 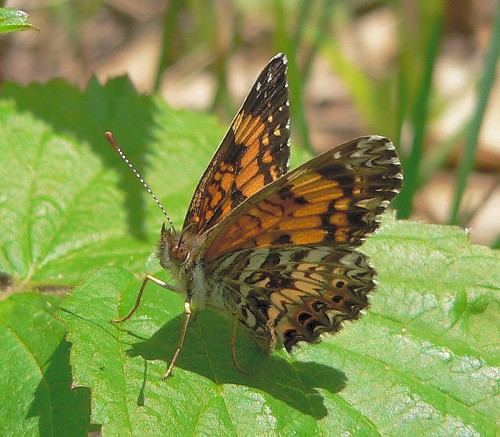 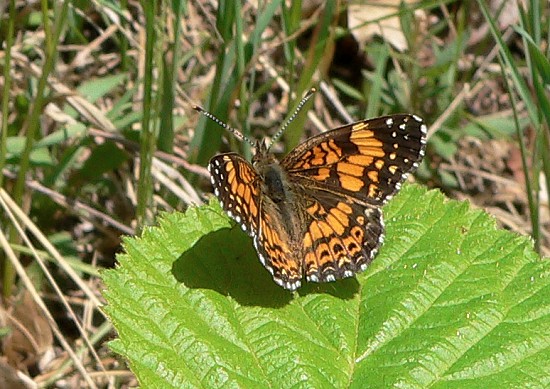 I also found Gorgone Checkerspots in the Narrows Prairie – it’s encouraging to see that they can live in reconstructed prairies as well as remnants.

I saw lots of American Painted Ladies searching for Pussytoes (Antennaria sp.) to lay their eggs on. I watched one lay some eggs, and then brought the plant home so I can watch the caterpillars develop. The eggs are pale green and very tiny – they blend in well with the furry leaves of the Pussytoes. 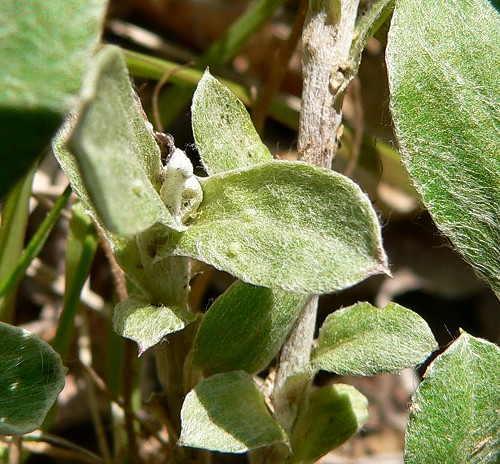 We found several fawns – some well hidden like this one on Hidden Oaks Prairie. 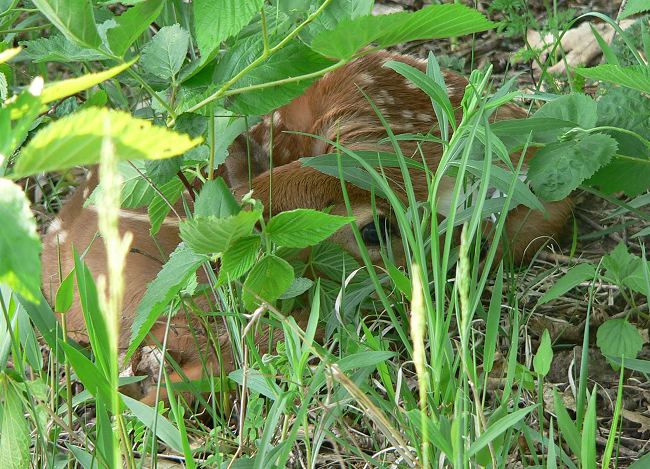 And others curled up right in the open. 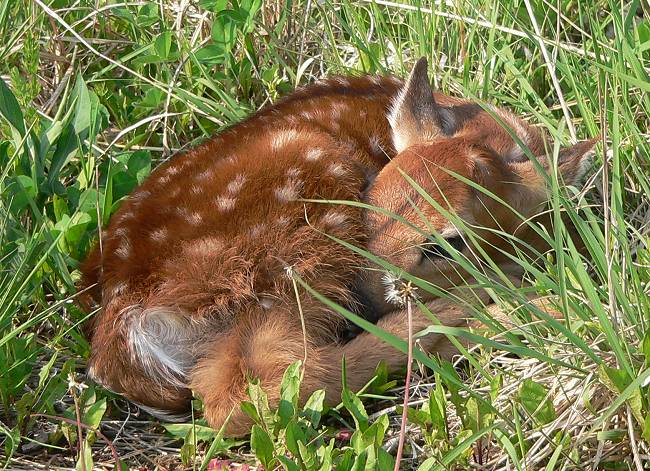 We found a Vesper Sparrow nest in one of the newly planted parts of Western Prairie. It was on the ground, partially hidden under some bent grass stalks.

Here’s a Tree Swallow staring at us from one of the nest boxes. 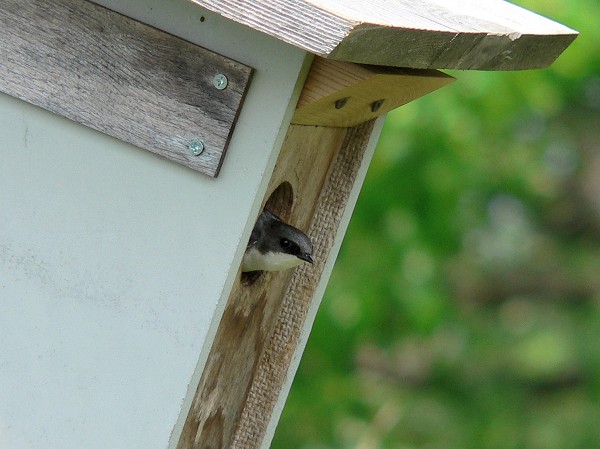 This is a Dusted Skipper 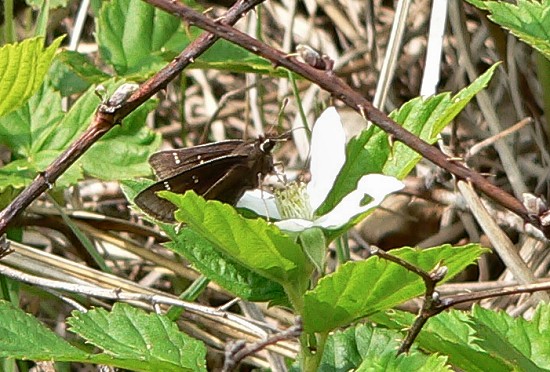 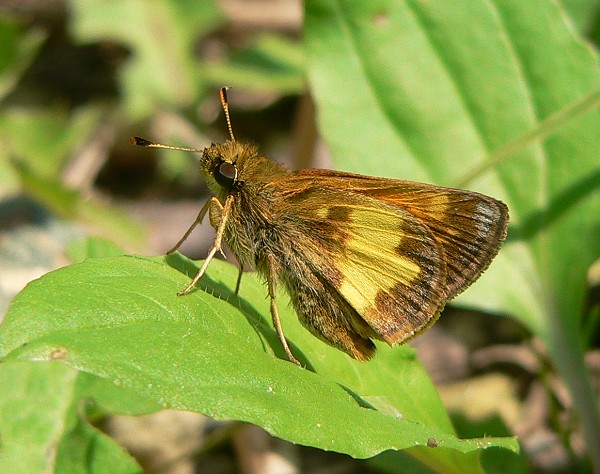 And here are some of the flowers that are in bloom right now. 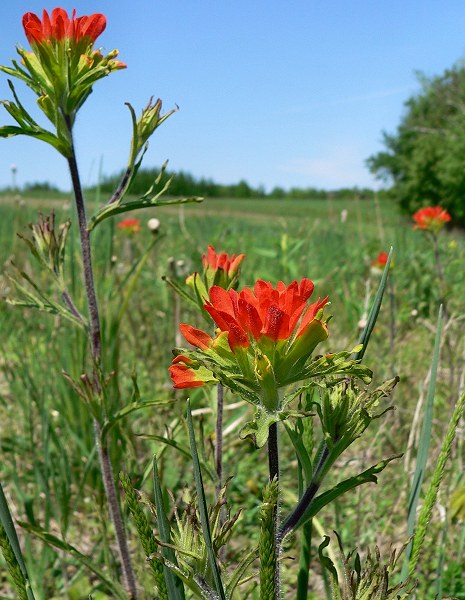 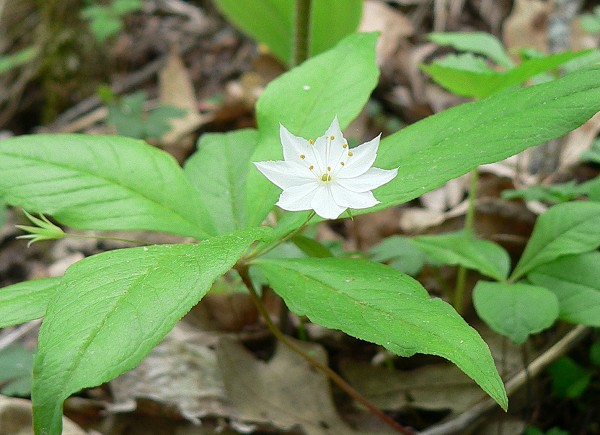 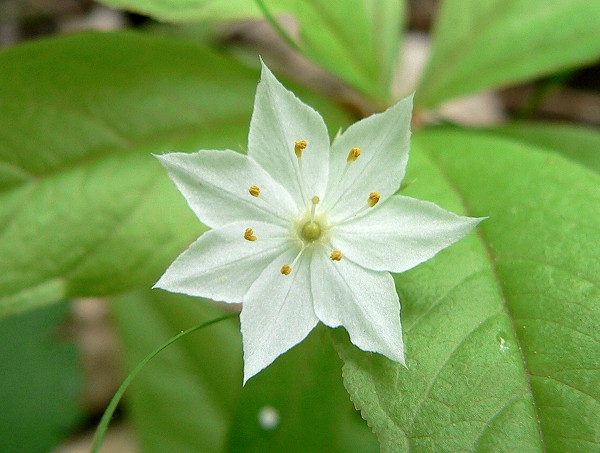 Golden Alexander (Zizia aurea) is blooming in all our planted prairies, but especially in the Narrows Prairie. 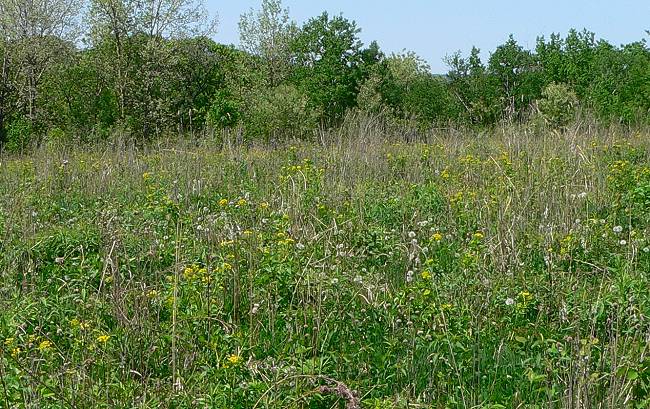 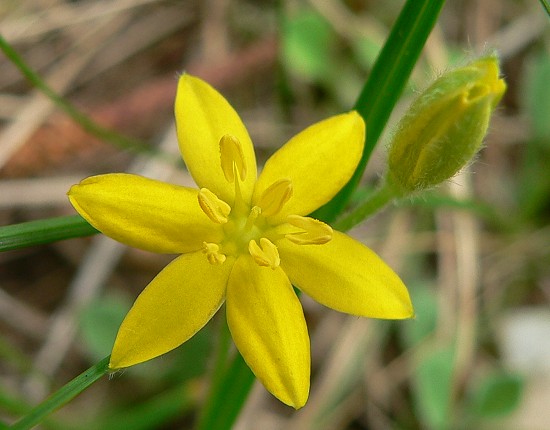 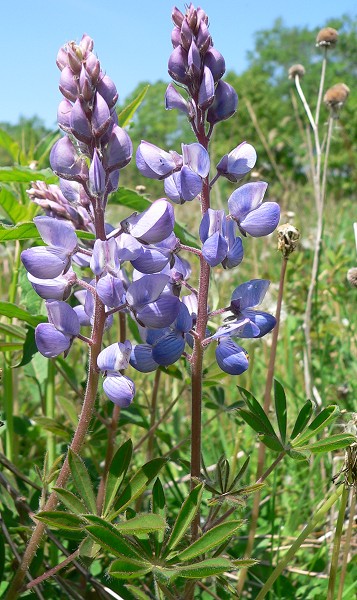 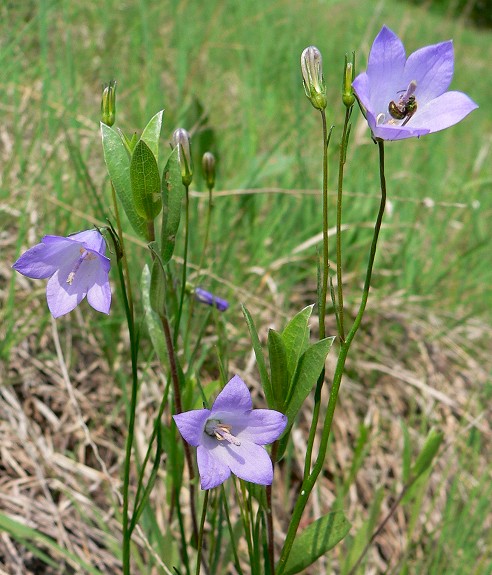 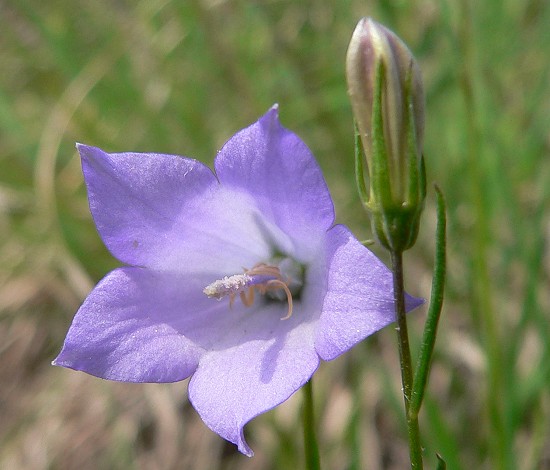 Balsam Ragwort (Senecio paupercula) is coming up in many of the areas where we’ve been clearing out brush. 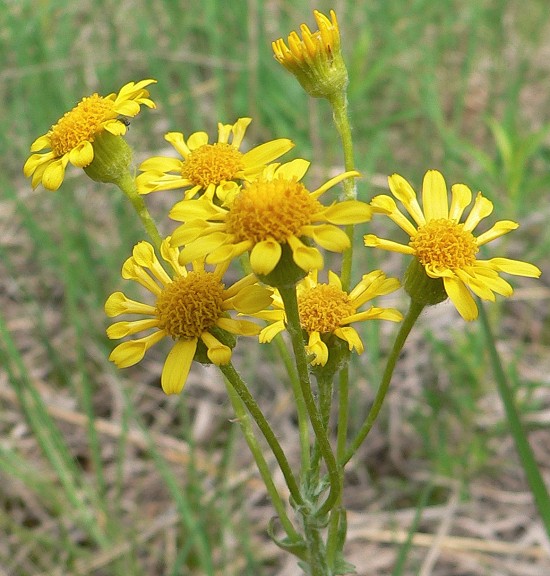 The area on Sumac Prairie where we cut Sumac last year is looking very good. We cut and treated the stumps of the sumac just as it was starting to change color in the fall. This year there’s very little sumac coming back in that area. Here’s a photo of the area – just beyond it is an area where we didn’t cut the sumac. 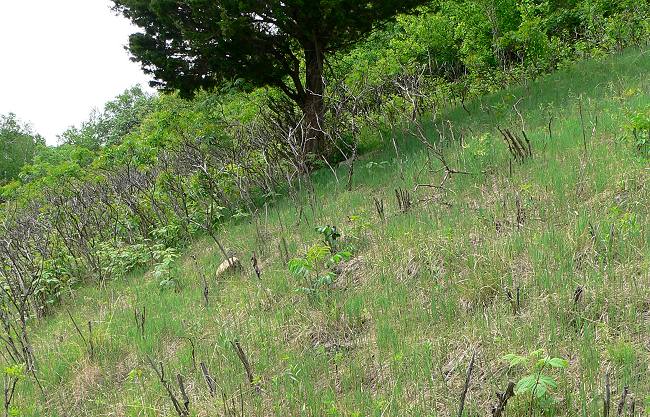 My Polyphemus moths have all hatched but the weather has been bad for mating. They like warm calm nights, and most of our nights have been cold or windy. So I still have several moths left unmated. Margot also brought over all of her moths – she’s been having the same problem.

This is a male just emerging from the tangle of leaves surrounding its cocoon. I was standing next to the cage and heard a scratching sound. When I looked in, the moth was just starting to push his way out of the cocoon. 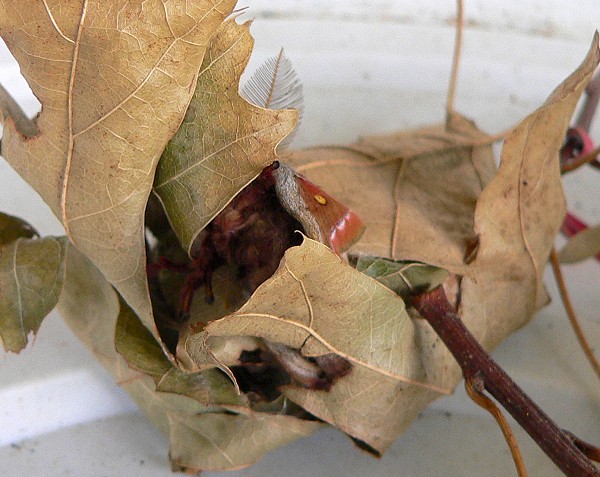 Here’s a female still hanging on to the leaves around it’s cocoon. 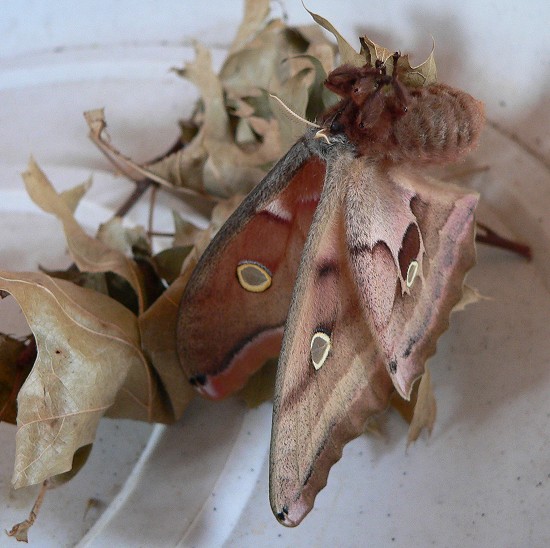 This one is ready to go – sitting on the side of the cage.

The Cecropia Moths have started hatching in the last few days – the first one hatched on May 23rd – that’s almost a moth earlier than last year. It’s been too cold to mate them too, and the males don’t want to fly away when it’s this cold. So I have a large collection of moths waiting for good weather. 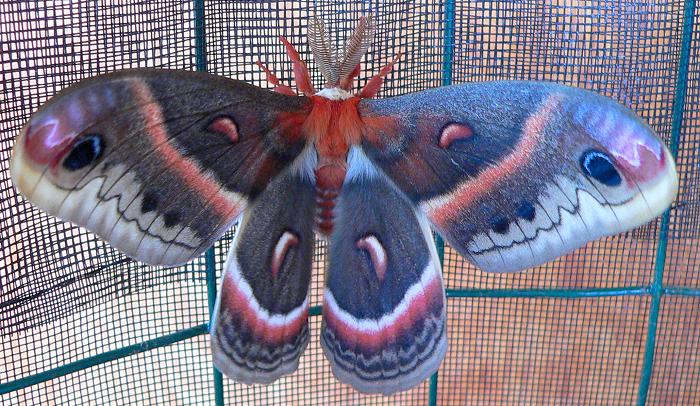