This week turned out to be very snowy. We got 10 inches one morning – about 2 inches an hour for a few hours. It was amazing to watch it come down so fast. 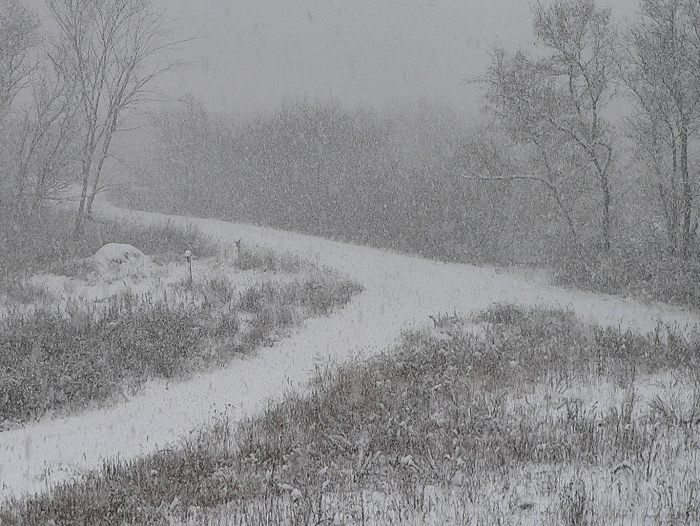 We were worried about walking on the road because the visibility was so bad, so we took our morning walk up the hill and back to Hidden Oaks Point and the Knife Edge. It was beautiful and very good exercise. 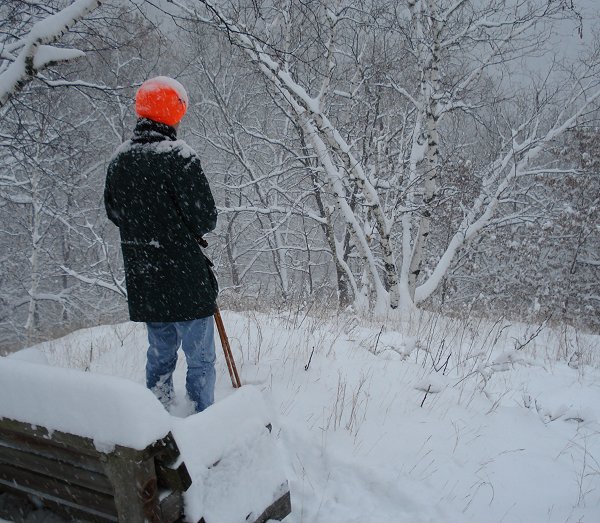 The tractor wouldn’t start, so Mike used the bucket on the powertrac to plow out the driveway. It worked so well that he got carried away, and after he finished the driveway, he plowed out a walking path up the hill. 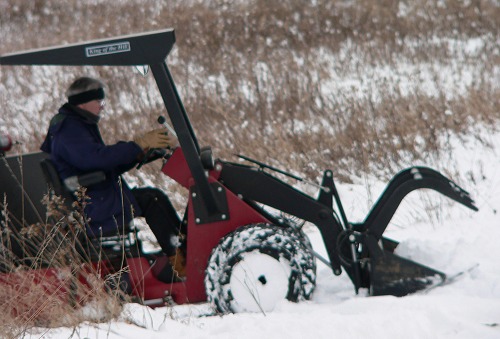 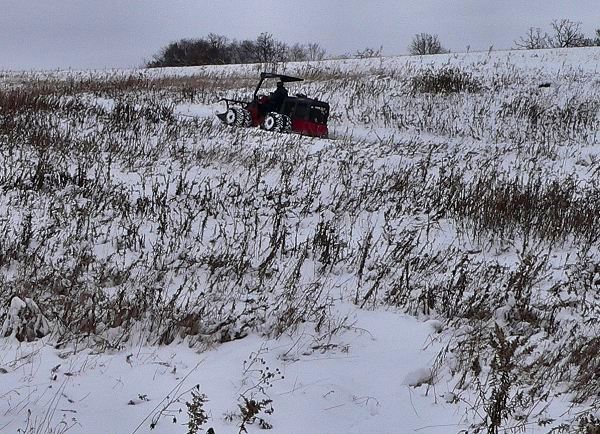 The only trouble he ran into was that the Cabin Road has places where it slants sideways. When he drove by one of those spots, the powertrac decided it would rather go down the hill than follow the road. So he ended up sliding down the steep path into Goldenrod Valley. It was a little more exciting than he planned – I think from now on we’ll just plow Western Road and leave the Cabin Road for drier days. 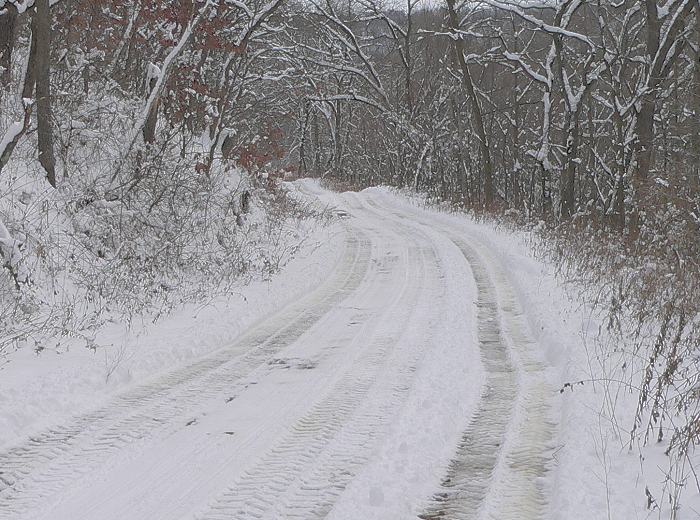 Mike brought up the rest of my stakes to Western Field in the bucket of the powertrac, and I pounded them in through the snow. Western Prairie looks even more like a moonscape now. 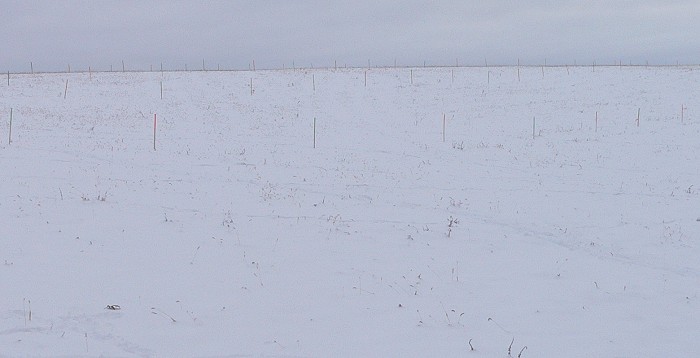 I had a great owl adventure this week. Last week we thought we heard a Barred Owl one night – just a short call so we weren’t absolutely sure. We’ve heard Barred Owls on our land once before – several years ago when we were staying in the cabin. Barred Owls are the only owls, in my experience, that come to investigate if I call them.

So one evening just after it got dark, I sat on the deck with my tape player and started playing the Barred Owl call. After about 10 minutes a big bird flew over me into the trees in front of the house – I could see its silhouette in the branches. I kept playing the tape, hoping it would call back so I could be sure it was a Barred Owl, but it kept quiet. Finally I decided to stop and just sit and listen to the night noises. I sat quietly for a few minutes – and couldn’t see the owl silhouette in the tree any more. Then I heard a Barred Owl calling from the tree right next to the deck – about 10 feet from me. It called, and I played the tape back to it, and it called – we kept that up for about 10 minutes until I started feeling guilty for not being another owl.

The weather is still fairly warm – it gets up above freezing during the day – so the snow is slowly melting away. We got another few inches one night, but unless it gets colder soon, we won’t have snow for much longer.

Here’s a view of Center Valley from the road – the red-gold colors in the middle of the valley are the dried prairie grasses. 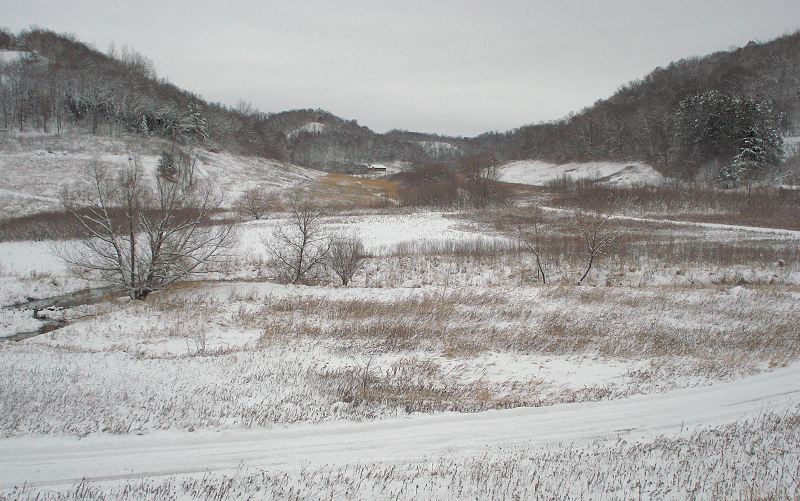 This is Center Valley looking the other way – from next to the house looking toward the road. 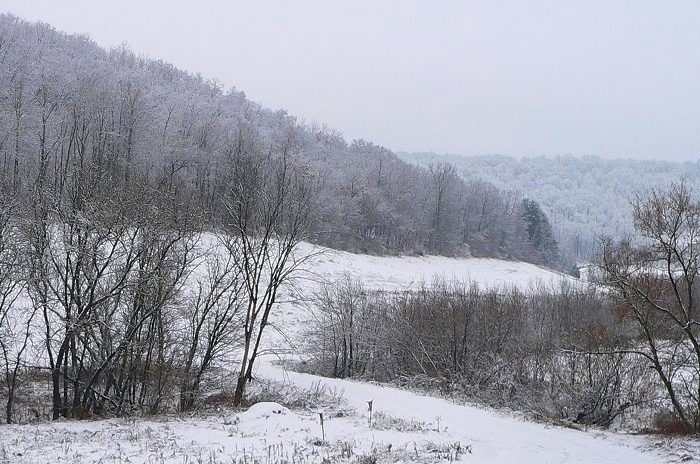