We got our first taste of winter this week – snow showers that left tiny pellets of snow sprinkled over the ground and piled in sheltered corners. The next day the temperature went back up to the 50s and it all melted.

The biggest adventure we had this week was going to a farm auction. It was a sale of farm equipment – everything from shovels and hay forks to tractors and combines. We were interested in an antique fanning mill that we thought might be useful for cleaning prairie seeds. The weather was cold so the auction wasn’t very well attended, and we were the only ones bidding on the fanning mill – we got it for $2. It has probably been in a barn for the last 50 years so it was full of mouse droppings and dust and seeds, but after cleaning all that out, it looks pretty good. 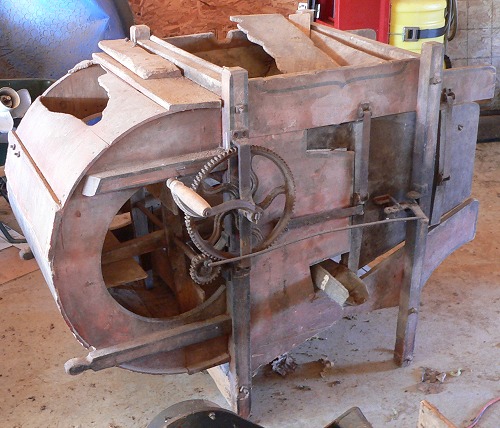 The earliest fanning mills were built in the 1840s, many of them in southeastern Wisconsin. They were used to separate the grain from chaff before planting.

Mike put penetrating oil on all the moving parts, so now the wheels turn and the shaker shakes. We’ll repair the wooden pieces and then try it out on some seeds. The idea is that the seeds and chaff are poured into the hopper at the top. Turning the handle rotates a fan at one end and shakes a box with two metal screens at the other end. The seeds fall through the screens into a trough at the bottom, and the fan blows the chaff out the end of the mill. With some screens of different sizes, and turning the fan at different speeds, we’re hoping it will work to clean our prairie seeds.

We did one big tree removal project this week – on Indian Grass Prairie – to try to open up the area on top to the prairie opening on the west side of the point. We’re not very good at taking “before” photos – we’re usually so excited to get started on a project that we forget to stop and take a picture.

Here’s a photo we took in April of 2003, looking south, right after we had mowed a lot of the brush out of the middle of the top of the point. 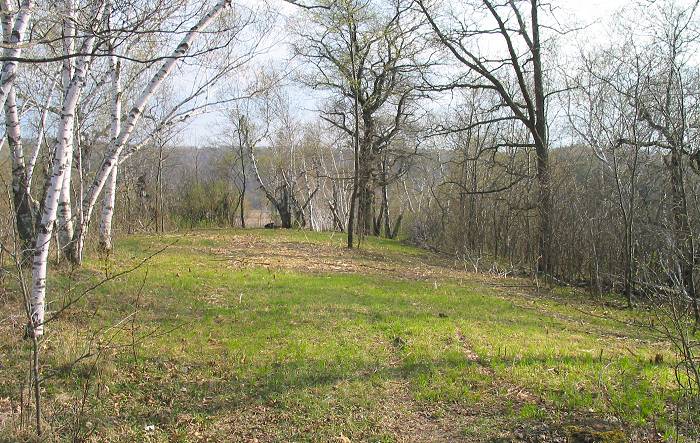 In the spring of 2005 I started girdling some of the aspens around the opening, and last week we decided to start cutting down the dead ones. Here’s a photo from last week’s blog – showing the same area after we’d removed some of the trees. 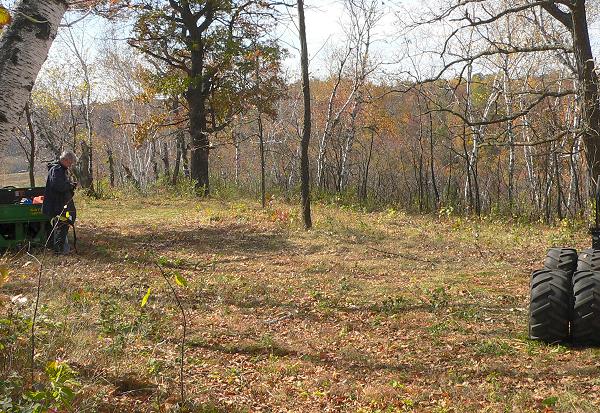 This is also from last week – looking toward the prairie opening on the west-facing side of the point. 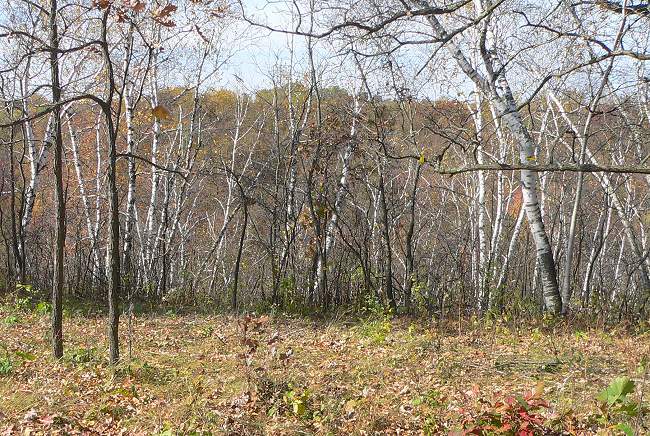 This week we spent two mornings cutting mostly prickly ash and birches. This is our first try – we didn’t quite make it through to the opening. 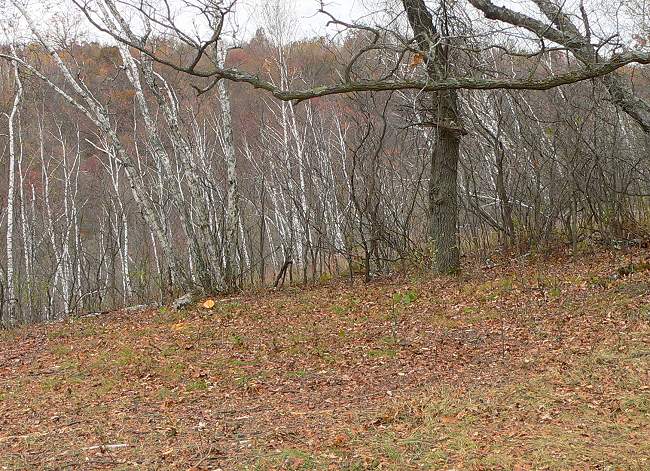 Now here’s the wide path where we finally got through to the prairie opening. 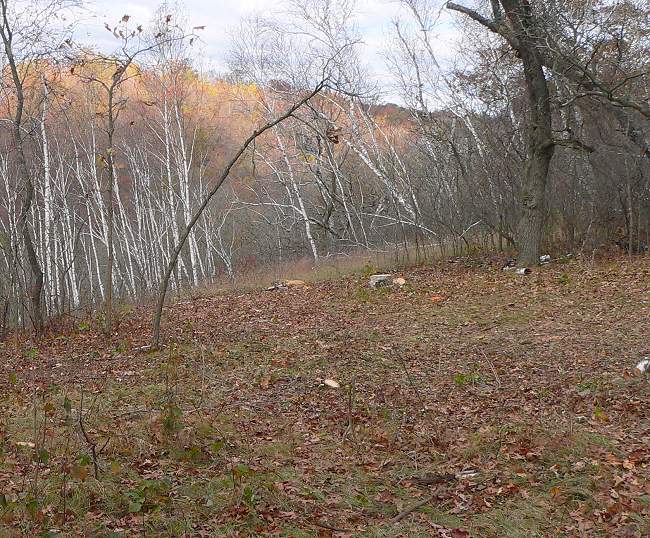 And a better picture of the opening – with the sun coming out. 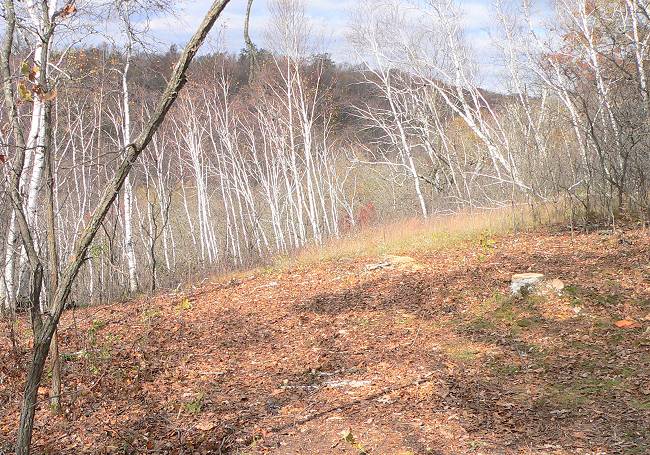 I also started staking the middle of Western Prairie field for planting this winter – about 19 acres. Last year it was planted in soybeans. This year we’ve been mowing it all summer, and a few weeks ago we had it sprayed with 24D to try to kill the clover and other broad-leaved weeds. The plants that are left are mostly annual Foxtail grass, which should disappear as the prairie matures. 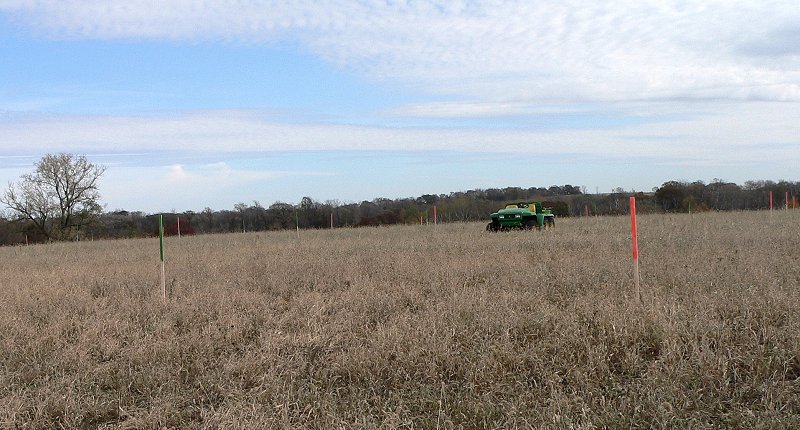 The woods have been full of migrating flocks of birds this week – mostly Robins and White-throated Sparrows. When we take our walk to Hidden Oaks Prairie in the evenings, we sit on the end of the point and hear the birds below in the valley chattering and rustling in the trees.

Here’s a big flock of Wild Turkeys on Buffalo Ridge Prairie. It’s much easier to see Wild Turkeys on the mowed prairies. They like the older prairies too, but it’s difficult to get a picture because they’re so well hidden in the tall prairie plants.