Fishers are large weasels that normally live in more northern areas, including northern Wisconsin. I haven’t found any literature saying that they are found in western Wisconsin, but I’ve heard several stories of Fishers in this area. Our friend Dan, down the road, has seen a Fisher on his land, and a biologist friend once saw one on our land. Now that Mike has seen one we’ll add it to our inventory.

The Partridge Pea is starting to bloom in the prairie areas around the house. Partridge Pea (Chamaecrista fasciculata) is an annual prairie flower that grows in sandy places. It really likes the sandy soil around our house. In this picture it looks like it’s the only thing growing there. 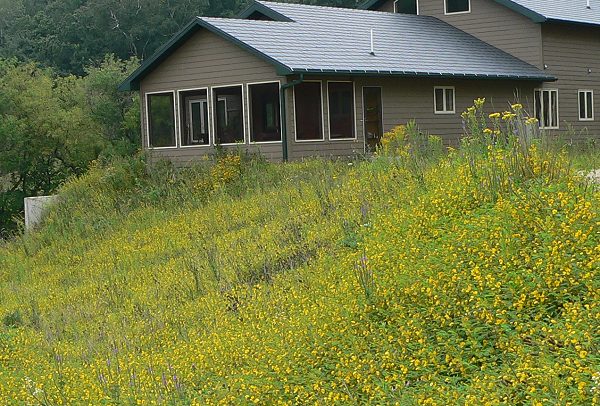 I’m a little worried that it will take over – I’m hoping that once the grasses and some of the other plants get older, it will back off a little. In the meantime it’s beautiful and I can get plenty of seed to plant in the other prairies. It doesn’t seem to be aggressive in taller, less sandy prairies. 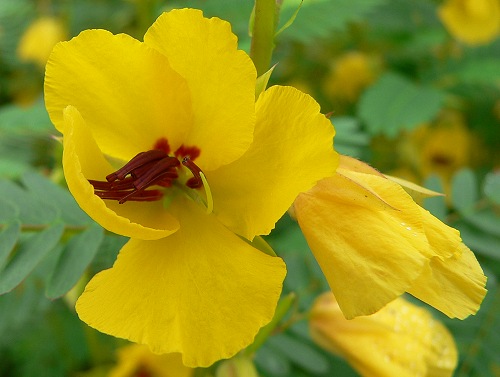 During the day we hear the constant noise of bees in the Partridge Pea. Bees love the flowers, and they’re also interested in the small nectaries that are on each leaf petiole. 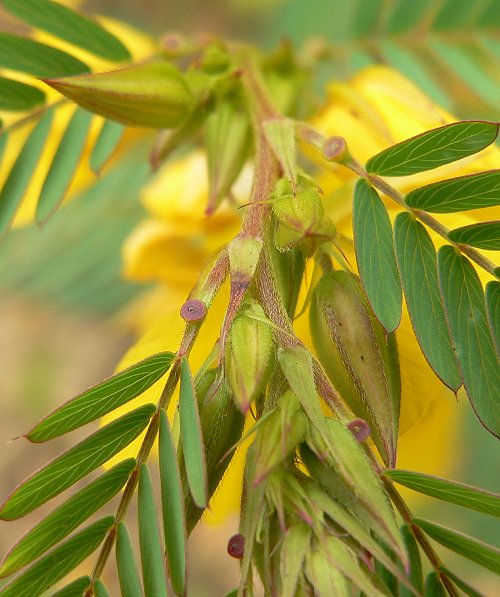 Some of the bees walk up and down the stalks and only visit the nectaries – never the flowers. Other bees visit the flowers. It’s difficult to get pictures of them because the flowers are on such flexible stalks that when the bee lands, the flower droops with the weight of the bee and hangs so it faces the ground. I finally did get a photo. 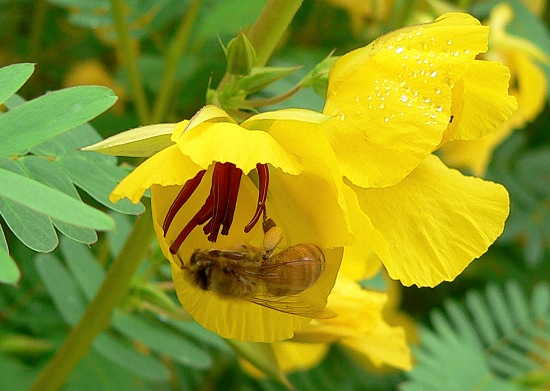 Our biggest project this week was to fix two potholes in one of our trails. They’ve been there for years, but they’ve been getting larger and filling with water so that it’s harder to get past them. We decided to try digging a ditch to drain the puddles into the ravine, and then filling the holes with rocks.

Here I am digging the ditch. It wasn’t difficult – there was already a ditch there, but it had gotten plugged up. I widened it and dug out the obstructions and the water drained out. 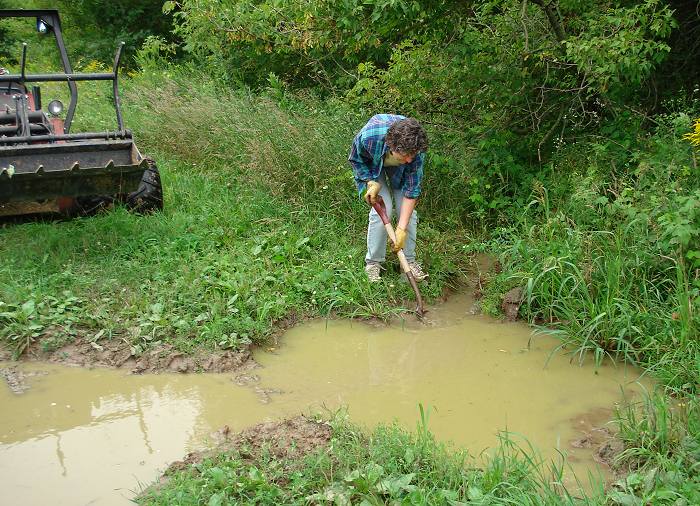 Then we made some trips between the potholes and a rock pile where the farmers have been throwing rocks that show up in the fields. We were wondering how old the rock pile is – it’s pretty large, and full of rocks with crystals in them. 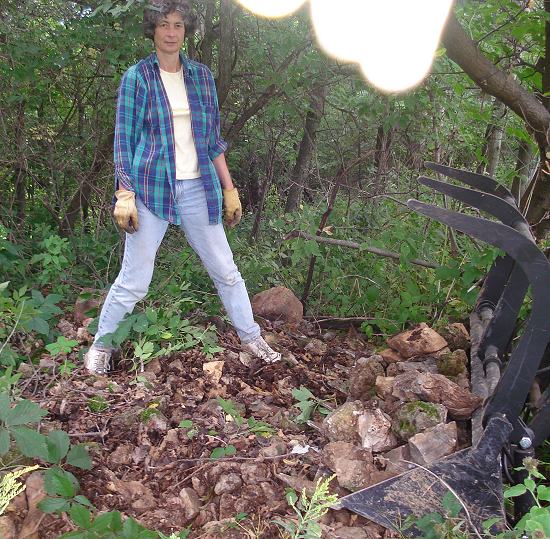 The rocks worked pretty well to fill up the holes. Here’s Mike after dumping some into the holes with the Powertrac. 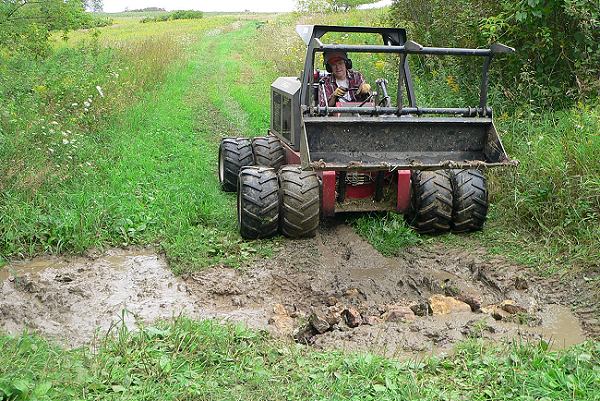 This is what the holes looked like when we were finished. Hopefully they’ll dry out now and be easier to drive over. 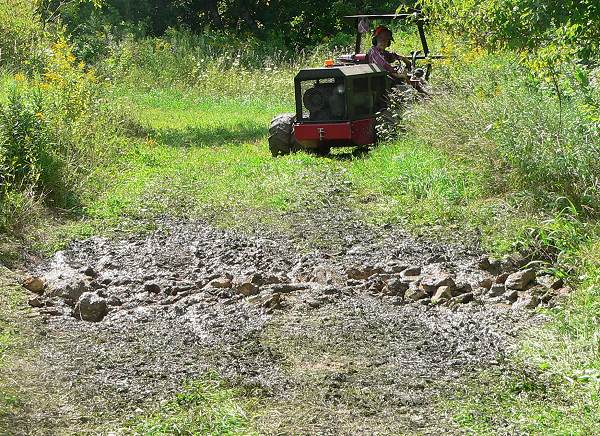 I spent some time working in Hidden Oaks Savanna – the area where we mowed brush two winters ago – pulling Queen Anne’s Lace. I enjoy that job because I can look carefully and see what’s coming up and which kinds of weeds I have to worry about. 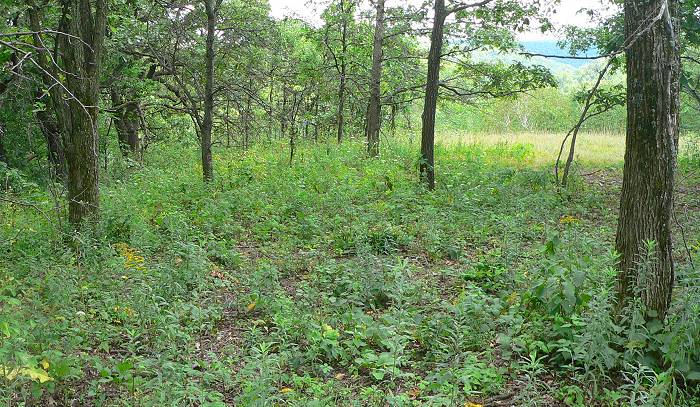 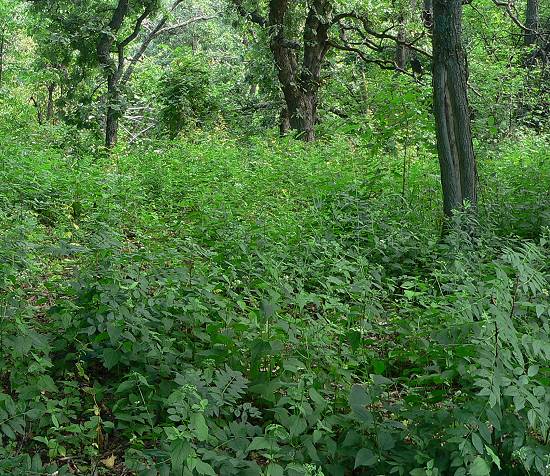 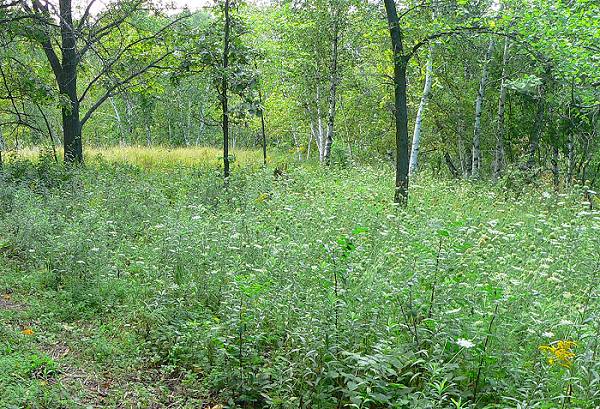 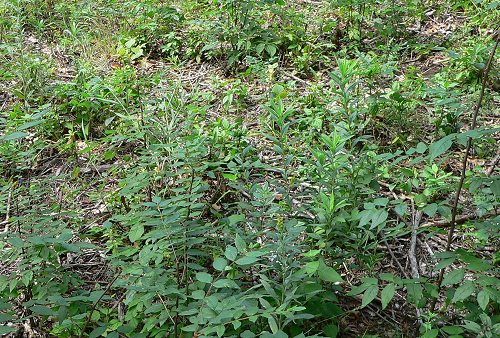 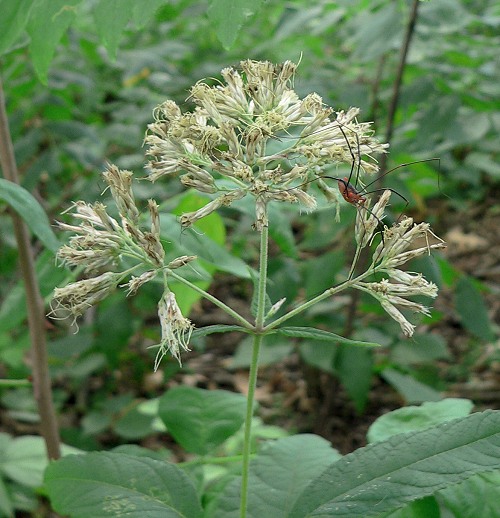 and one plant of Canada Hawkweed (Hieracium kalmii). 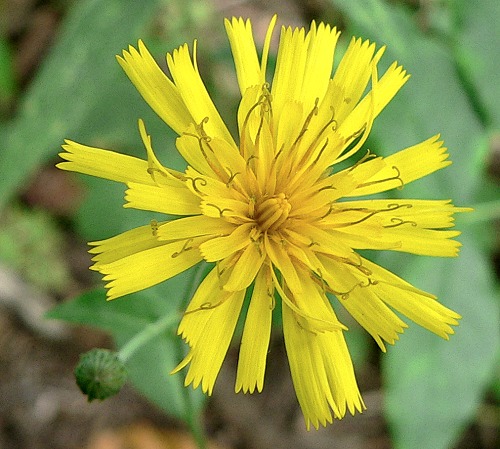 I planted some savanna seeds there last winter, and I found a few of them coming up. The best was Wild Lupine (Lupinus perennis). 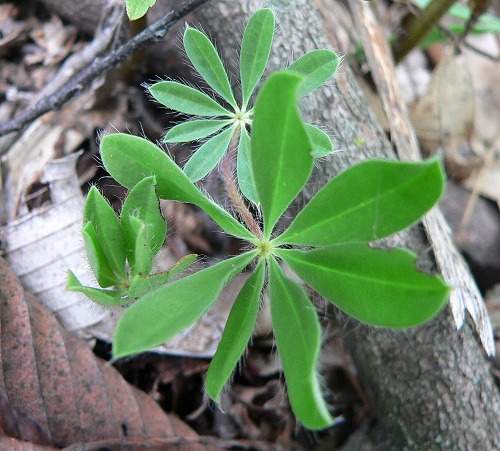 One was a very small mouse-like animal that looked like a Kangaroo Mouse or a Kangaroo Rat – neither of which are found in Wisconsin. It was about 1 ½ inches long, with a tail about twice that long. It had huge feet, a large head for its body, and small round ears. 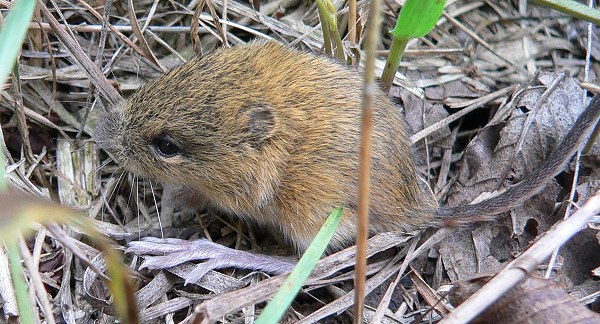 I asked the DNR, and they concluded that it was probably a juvenile Meadow Jumping Mouse (Zapus hudsonius).

The other was some small insects that I think are Treehoppers (Family Membracidae). They were on the stalk of a Field Thistle and partly inside a dead leaf that was curled around the stalk. They had odd, humped backs and were attended by ants. Treehoppers often have that odd, hump-backed thorax and they exude honeydew, which attracts ants. The ants collect the honeydew and also provide protection for the Treehoppers. 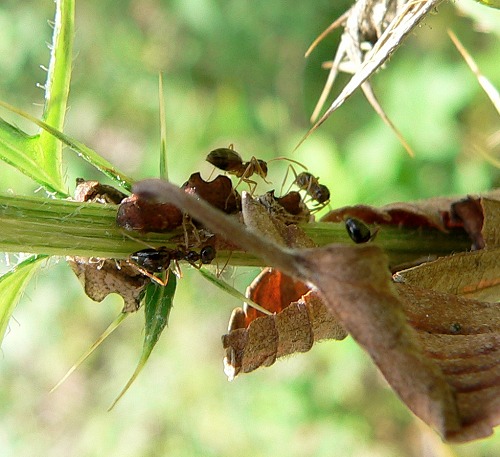 The deer are very brave right now – it’s been a long time since hunting season so maybe they’ve forgotten that people are dangerous. This one stood at the edge of the trail while I drove the gator right up to it. 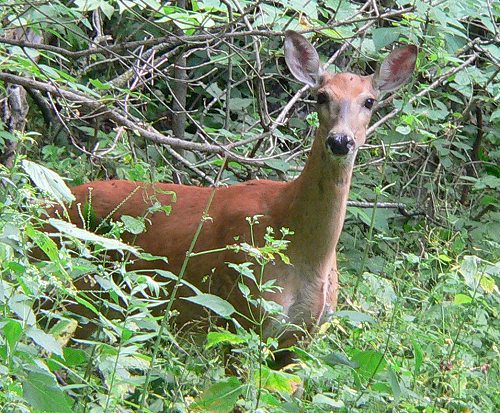 Here’s a cicada that we found on one of the porch screens. What odd looking creatures they are! 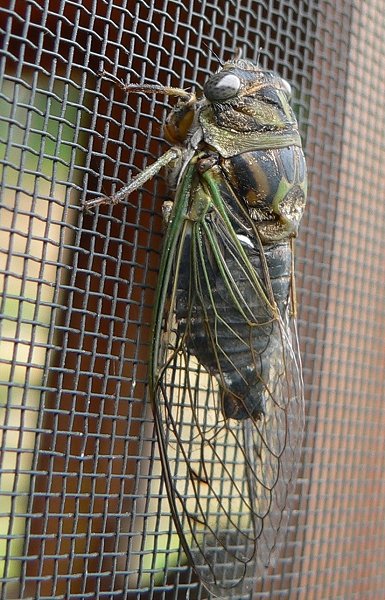 I had an odd bird experience this week. I walked out of the door, heading out for a walk, when a Coopers Hawk swooped over my head and landed in a tree above the cliff behind the house. It kept swooping over my head, starting to land on the roof, then veering away and landing in one of the trees instead. It looked like it was trying to chase me away, so I went back inside and it flew away. Here’s a picture of it glaring at me from the tree. 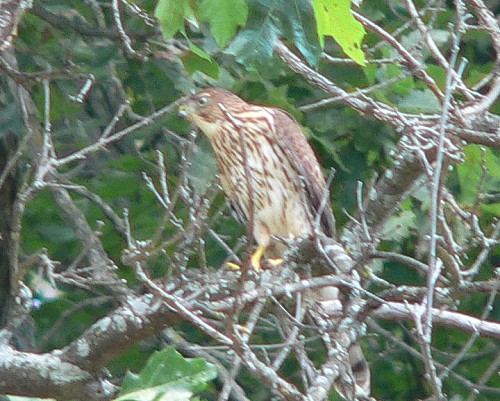 The Prickly Ash bushes are fruiting right now. Prickly Ash (Zanthoxylum americanum) is one of the problem plants in our woods. It’s a small tree that’s native to most of the north-central US. It has sharp thorns on the stems, and bright red and black fruits. 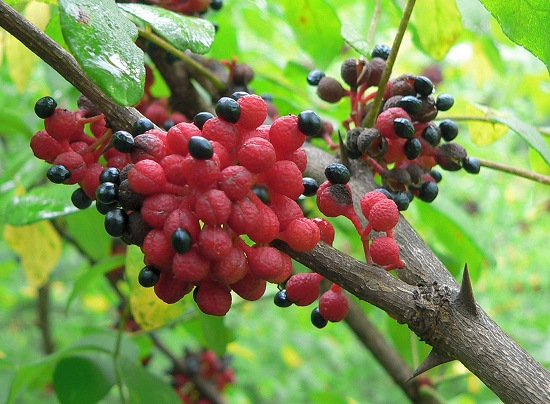 When the Indians were burning this area regularly the woods were less dense and there probably wasn’t as much Prickly Ash. Now shrubs like Prickly Ash, Dogwood, and Hazel make dense thickets under the trees which are difficult to walk through.

This is a path through Prickly Ash and Dogwood, with a Wild Grapevine growing over it. 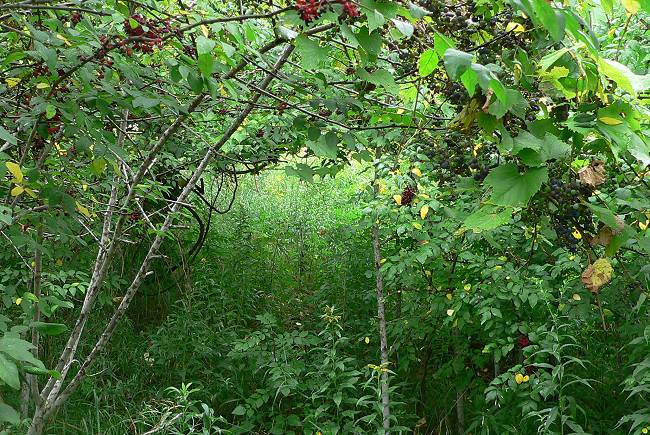 The deer and I use the path to get to Western Field. There are some nice things about Prickly Ash – it has a very citrus-like smell, especially when the fruit is ripe. And it’s the host plant for the caterpillars of Giant Swallowtail Butterflies.

Here’s one last picture of the wetland area that we reclaimed from Reed-Canary Grass. It’s looking especially beautiful right now. 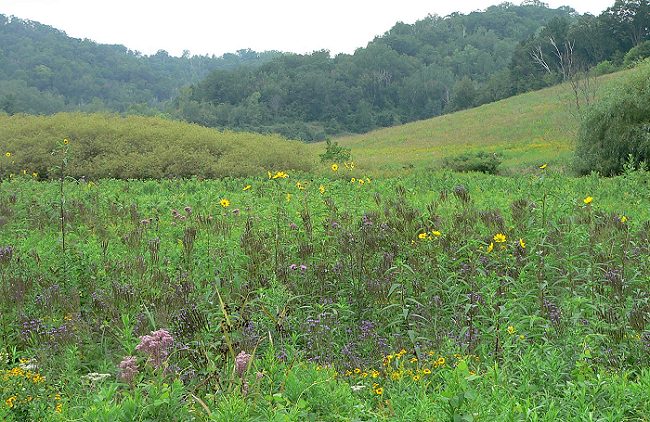