It’s pretty wintry now – we got just a little snow last week and it didn’t stay around.  But the flowers are gone, and the scenery is all shades of brown. 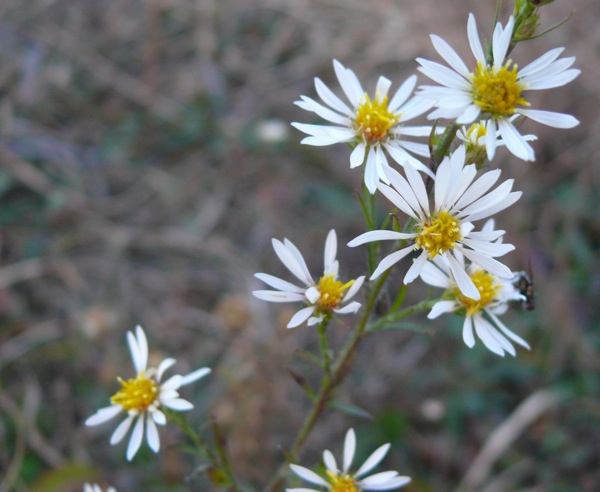 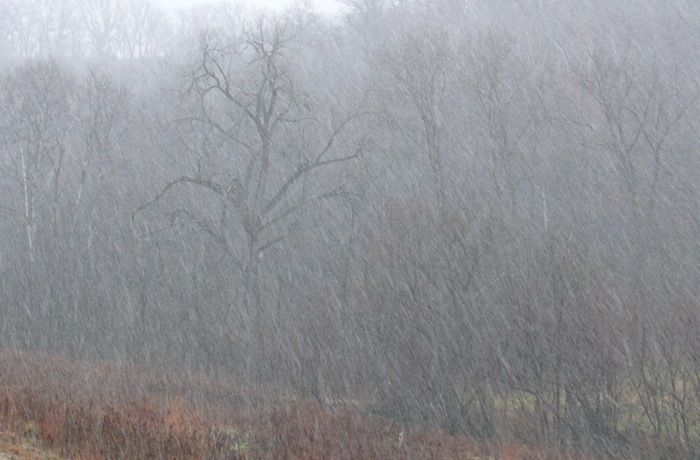 But the next day there was only a trace of snow left, and it melted by the end of the day. 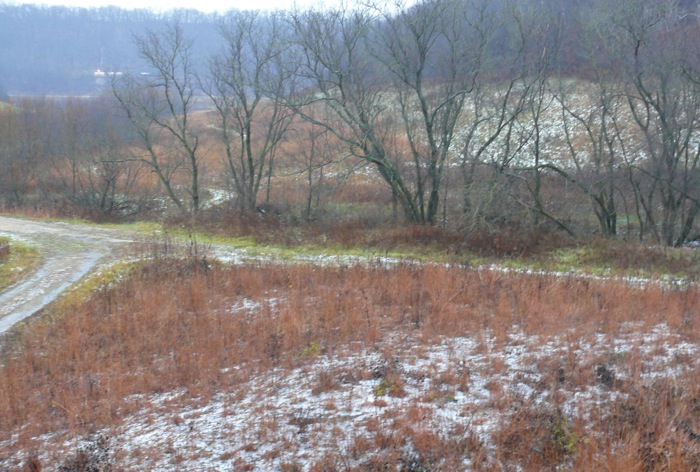 We’re glad about the snowless landscape – it makes it much easier to do outside projects.  Once the snow stays on the ground, most of our clearing work will have to stop.

Carlos came to visit this weekend and helped us get started clearing the south-east facing hillside below Hidden Oaks Point.

Here’s the before picture.   Mike cut Prickly Ash with the weedwacker, and the fallen logs with the chainsaw.

Carlos and I piled up the brush so we can come back later and move it with the powertrack.

Carlos and Mike – it’s gun hunting week, so we’re wearing orange and hiding down in our valley. 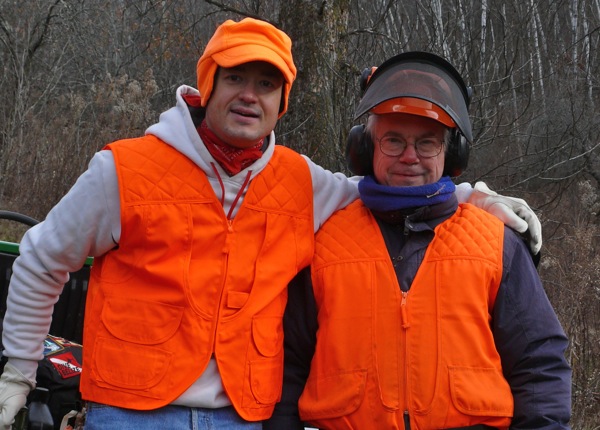 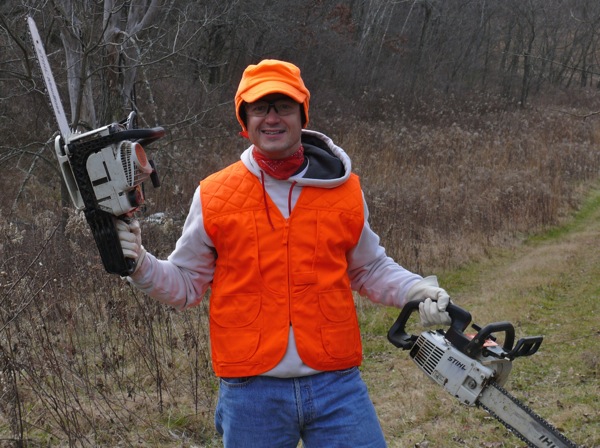 The end of the day – giant piles of brush and a path almost all the way up to the remnant prairie on top. 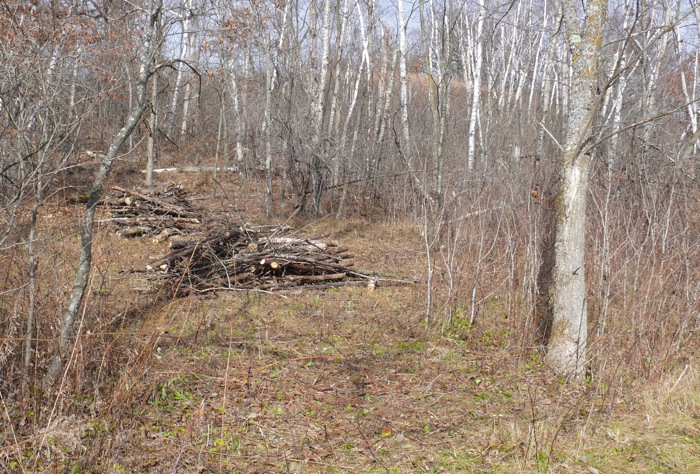 The other project is to finish off the work that the Prairie Enthusiasts did on Sumac Prairie.  We’re not there yet – there’s still a lot of clearing left to be done, but we enlarged the cleared area, and moved some of the brush piles – and made new ones.  And we only got the tractor stuck once!

Here are some deer munching away on the area the Prairie Enthusiasts cleared.  I hope they’re eating all those sumac branches we left behind! 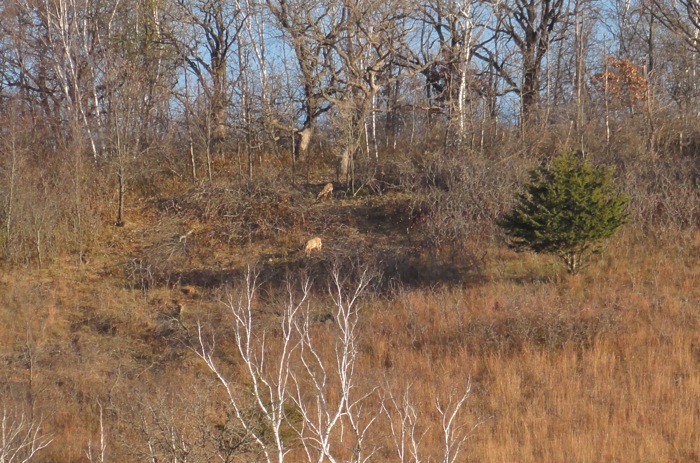 These are the biggest brush piles left from the TPE work day.  We had to clear the hill behind them so we could get the powertrack down to pick them up. 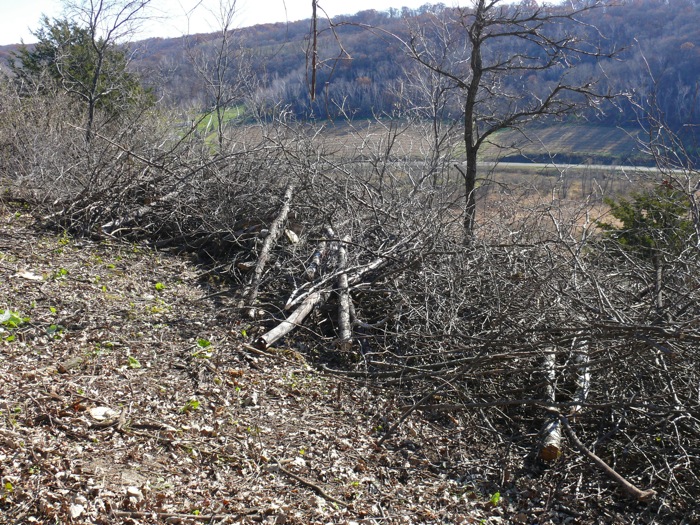 It’s easier to drive the powertrack – and better for the tires – when the stumps are shorter – so Mike cuts them with the weedwacker. 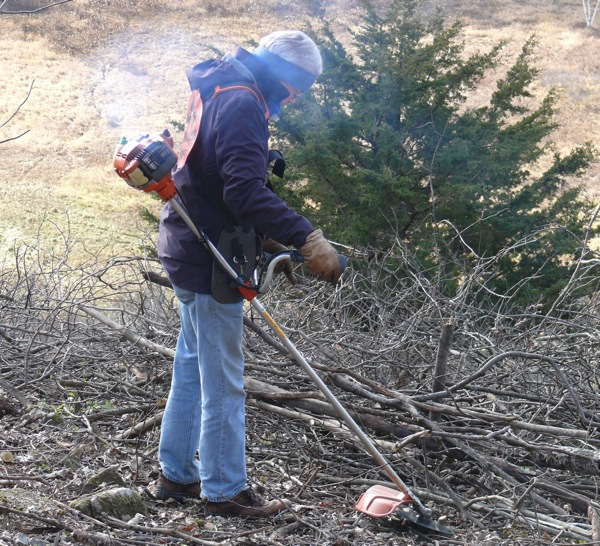 Here’s Mike, picking up and hauling away brush piles 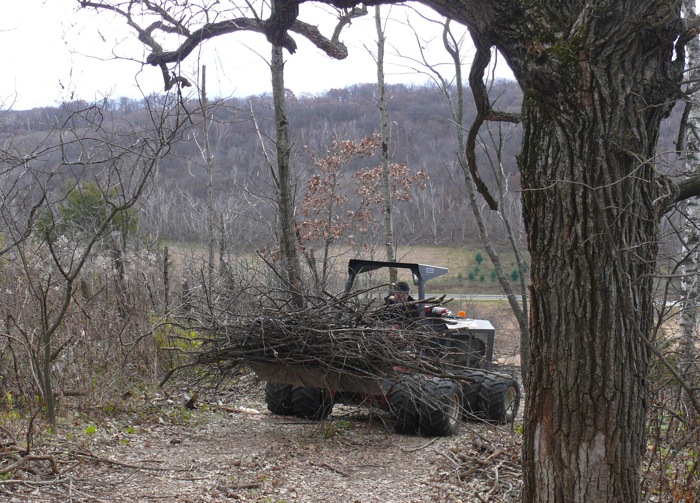 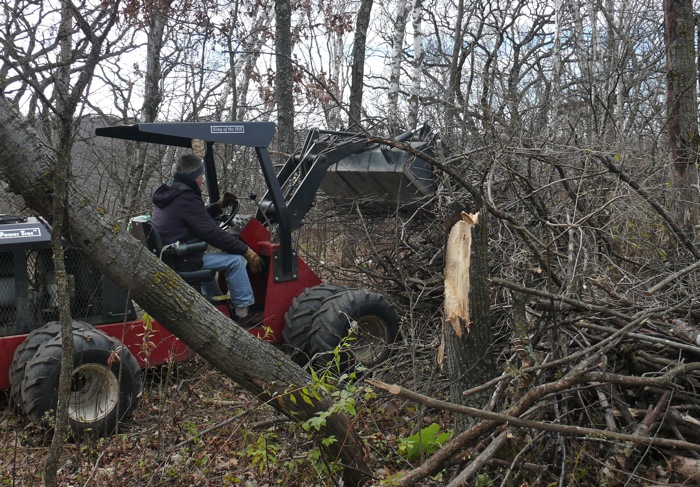 The piles are nearly gone. 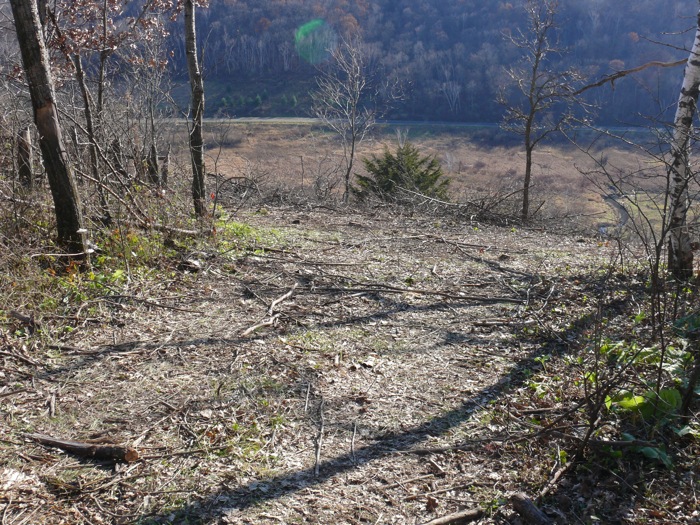 Mike tried to get one pile that was just a little too far down the hill, and got stuck on a rock. 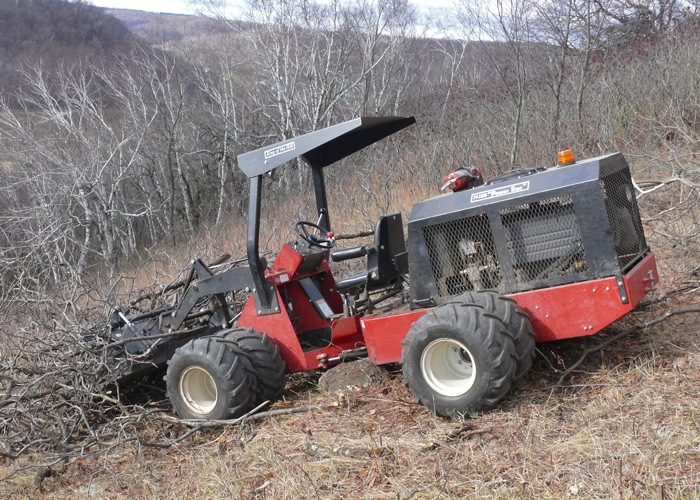 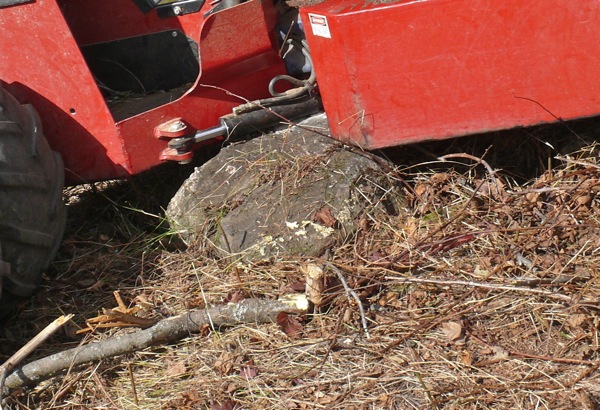 It took us an hour or so of digging and pushing to get the rock moved enough that the powertrack could drive out.


We also did some more clearing on the hillside – below the brush piles.  To the left is the stuff we were cutting – mostly sumac and raspberries.   To the right is a strip we cut and treated. 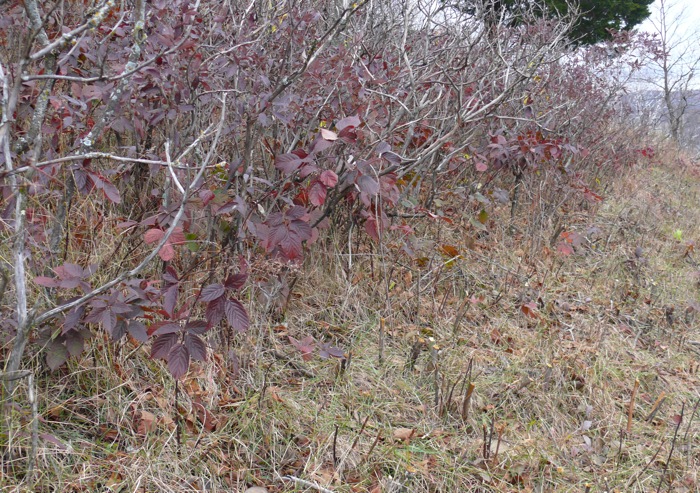 This is the cut area – it looks much better!  The prairie plants should grow better with so much more sun. 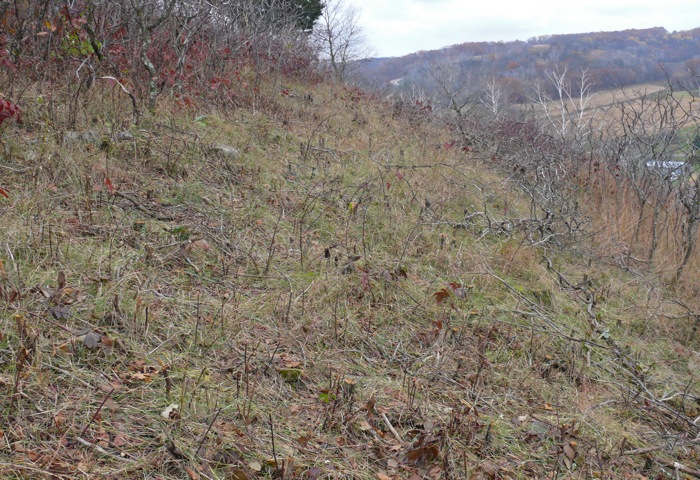 We also cleared more of the top, above the prairie.  This area is an overgrown savanna, with big, open-grown Burr Oaks.  This is the way it looks before we did any clearing. 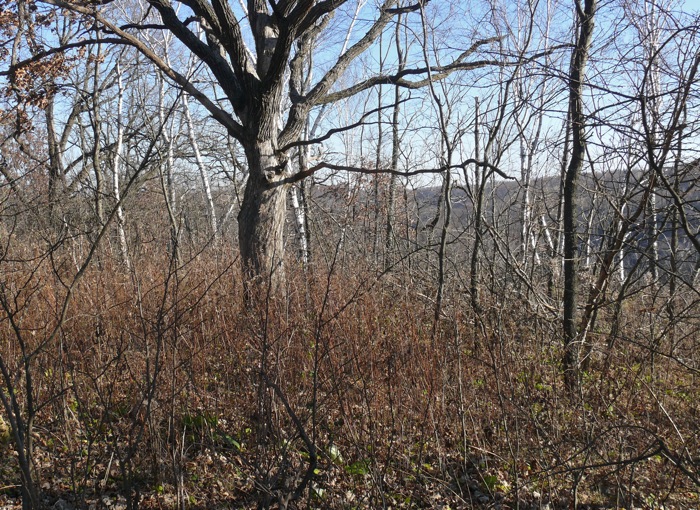 And this is after some clearing work.  It’s nice to ‘liberate’ these beautiful old oaks. 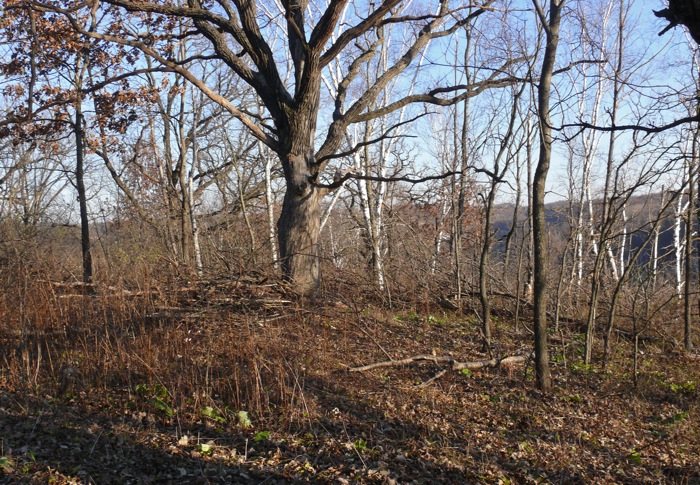 We’re trying to get the whole savanna area cleared of brush, fallen logs (from the aspen I girdled a few years ago), and stumps.  Then Mike can drive the powertrack in and clear the rest of the brush piles. 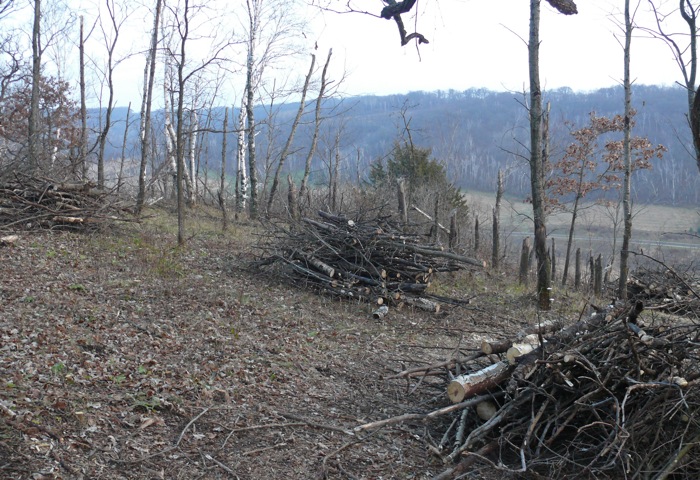 I’ve also been clearing some of the steepest parts of the Sumac Prairie – farther down the hill – by hand. The sumac isn’t as thick there, so it’s fun and rewarding to work on.  The hardest part is that I have to do it on my knees, because it’s so steep.  And it’s so rocky that I wear out the knees of my jeans.  The foreground has been cleared of sumac – unless it’s very thick I just leave the cut brush on the ground.  The prairie plants should be able to grow around it.

Most of the sumac has been cleared from this area.  The standing stalks in the foreground are dead sumacs. 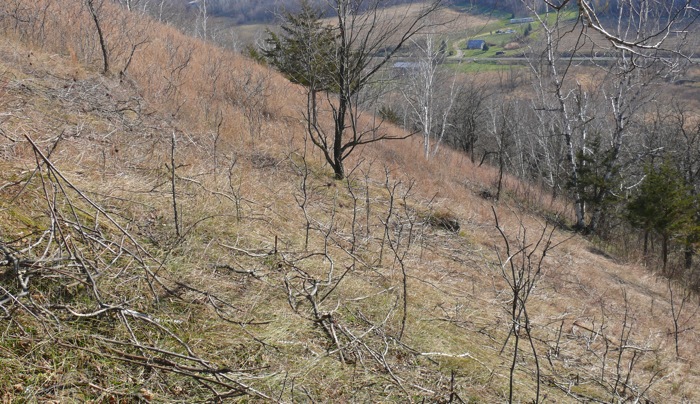 A Sharp-shinned Hawk hit one of our windows pretty hard.  She (I’m pretty sure it’s a female because she’s so large) was stunned and we were worried about her, but she recovered quickly and spent the rest of the afternoon keeping an eye on our birdfeeders. 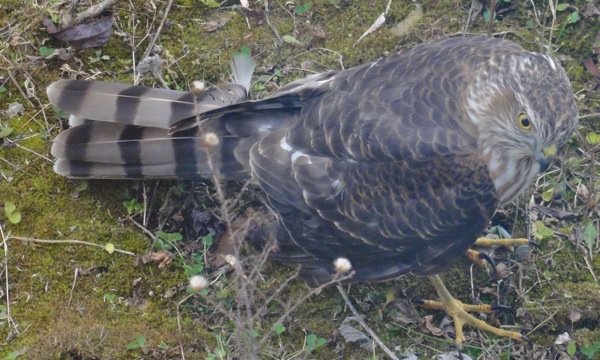 I looked out the window last night, after dark, and noticed that the roof of the garage looked odd.  The point of the roof looked too tall.  Then, as I watched, it flew away!  It was a large bird – I’m guessing either a Barred or a Great Horned Owl. 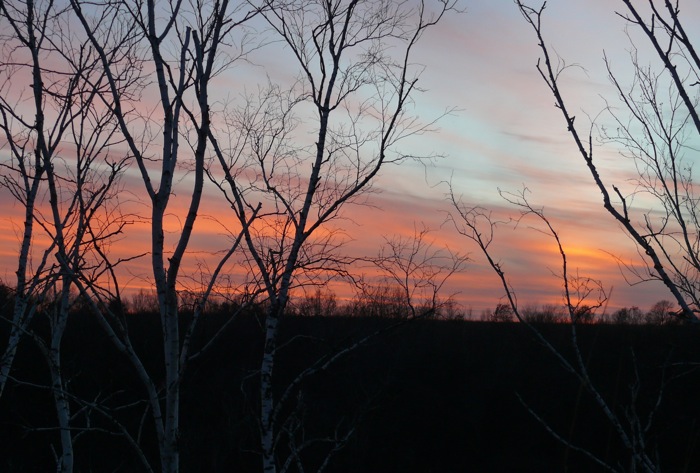