September is our transition from summer to fall, bringing cooler temperatures, shorter days, and the sun lower in the sky.  This week we had our first frosty nights. 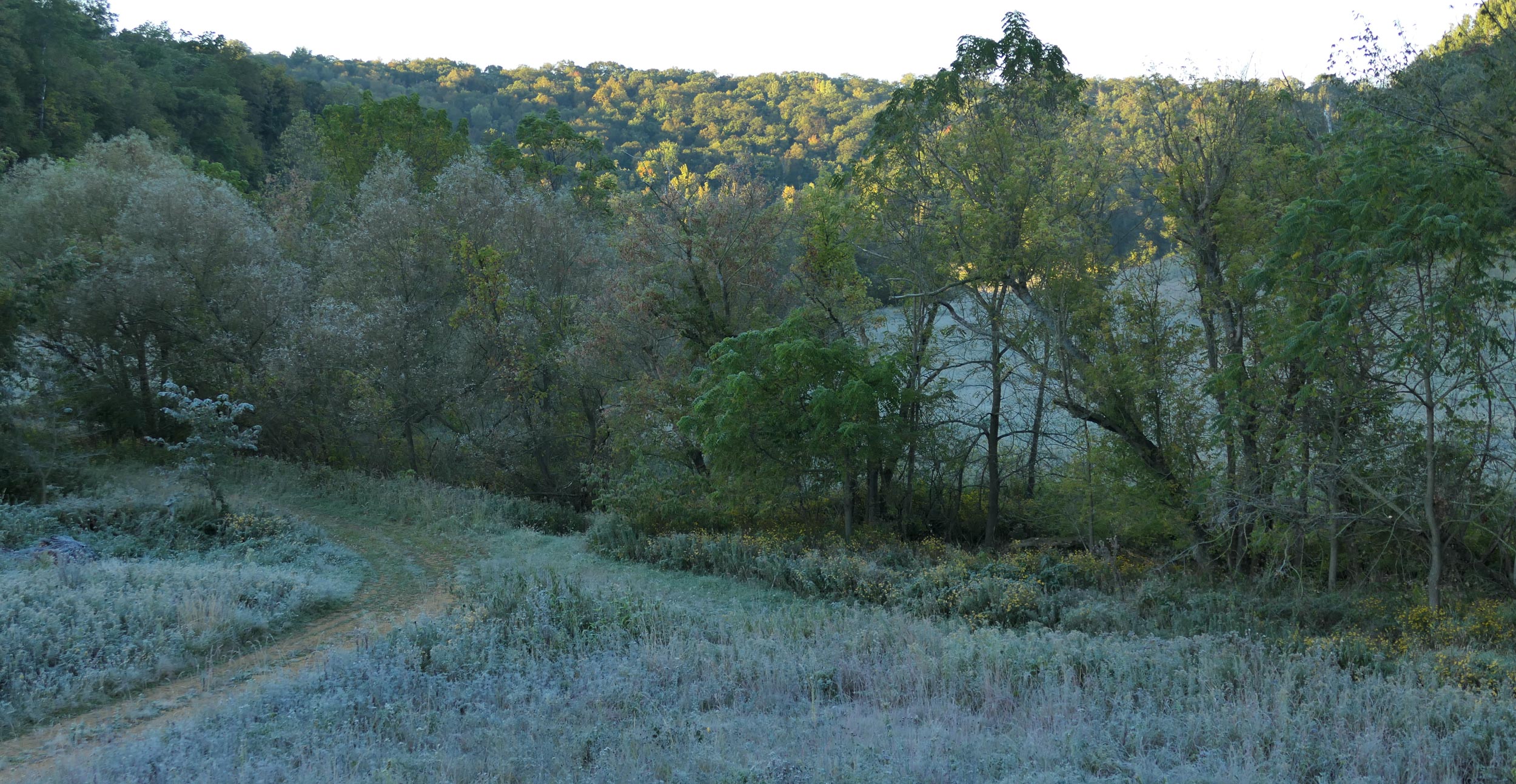 It’s slow to warm up in the mornings – there’s still frost on the grasses and in the shady spots when I drive up to work on top of the hill. 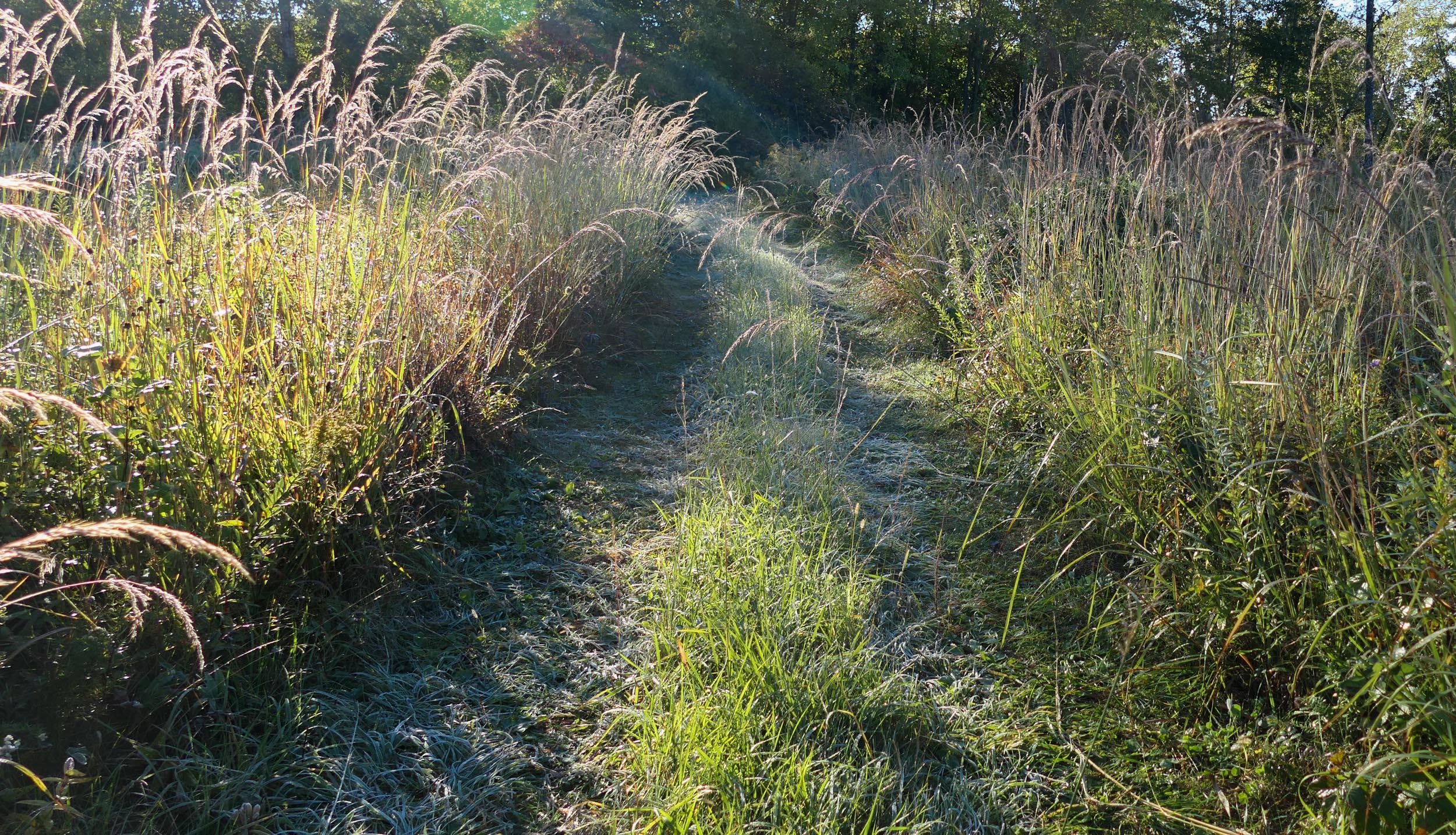 Until a few weeks ago the wetland was full of flowers – Tall Sunflowers, Swamp Thistle, and Joe Pye Weed. 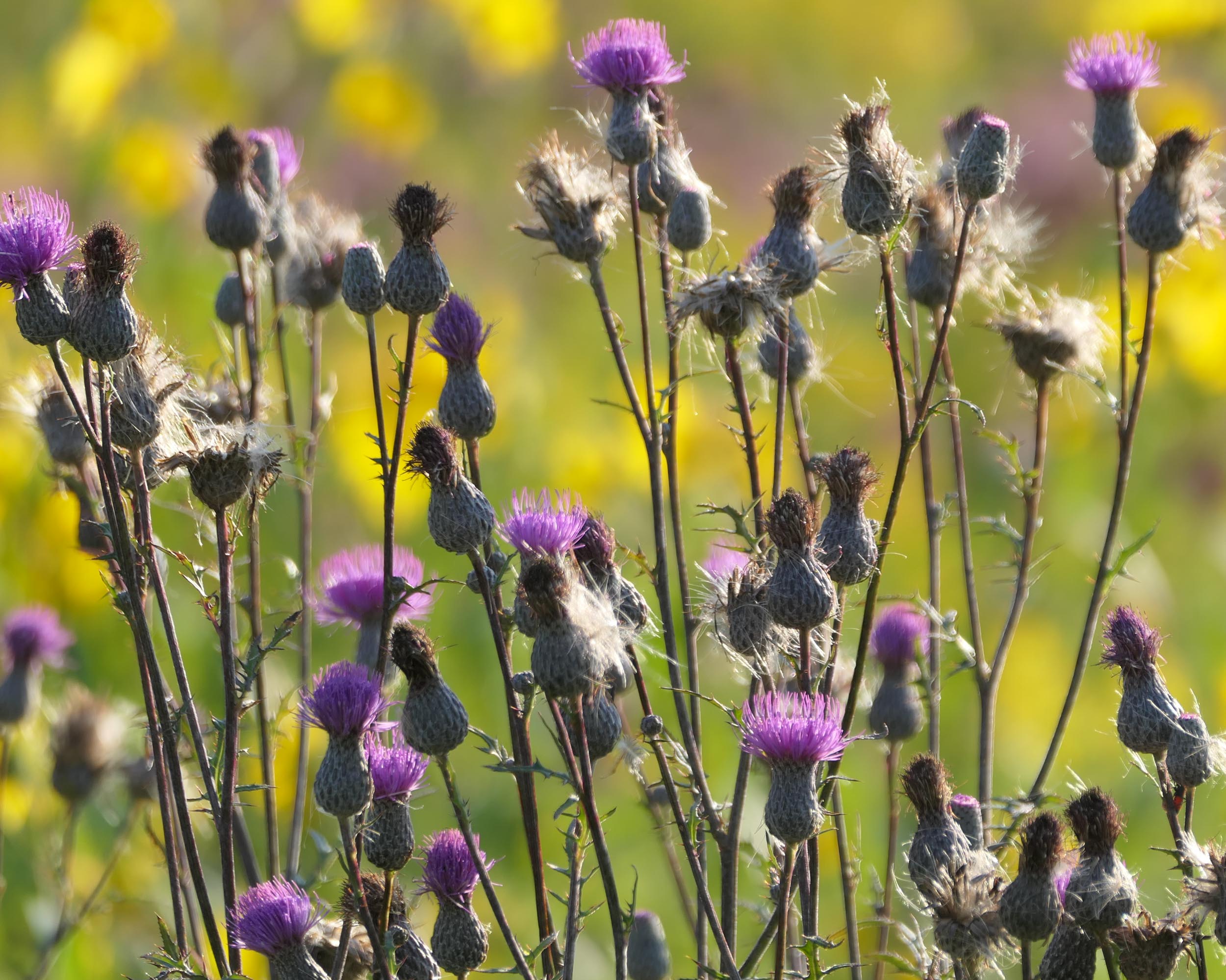 And now Sneezeweed – one of the last to bloom.  (It’s called ‘Sneezeweed’ because its dried leaves used to be used in making snuff.)

Now most of the wetland flowers have gone to seed and the wetland is full of birds – mostly goldfinches and migrating sparrows – eating the seeds. 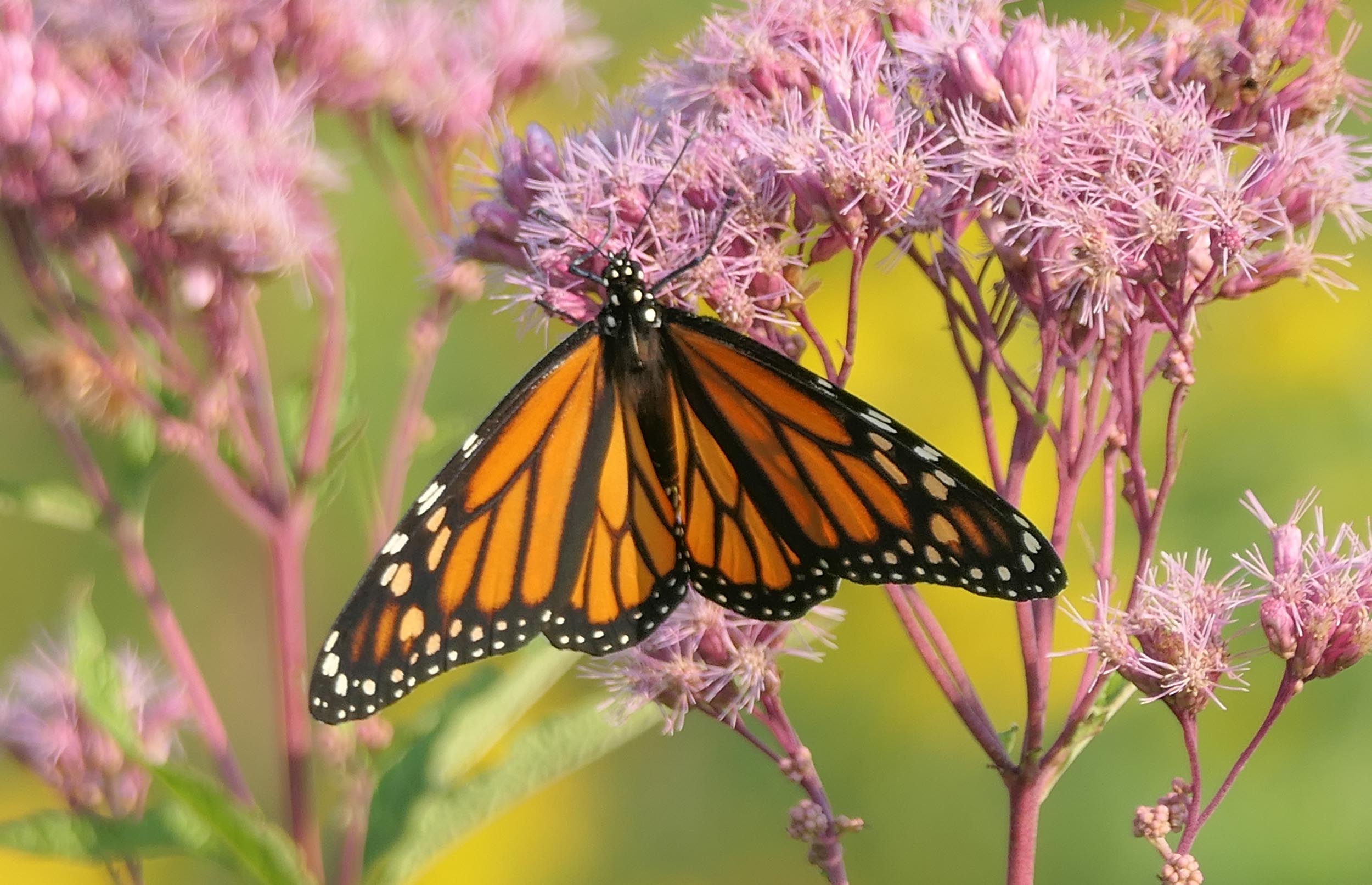 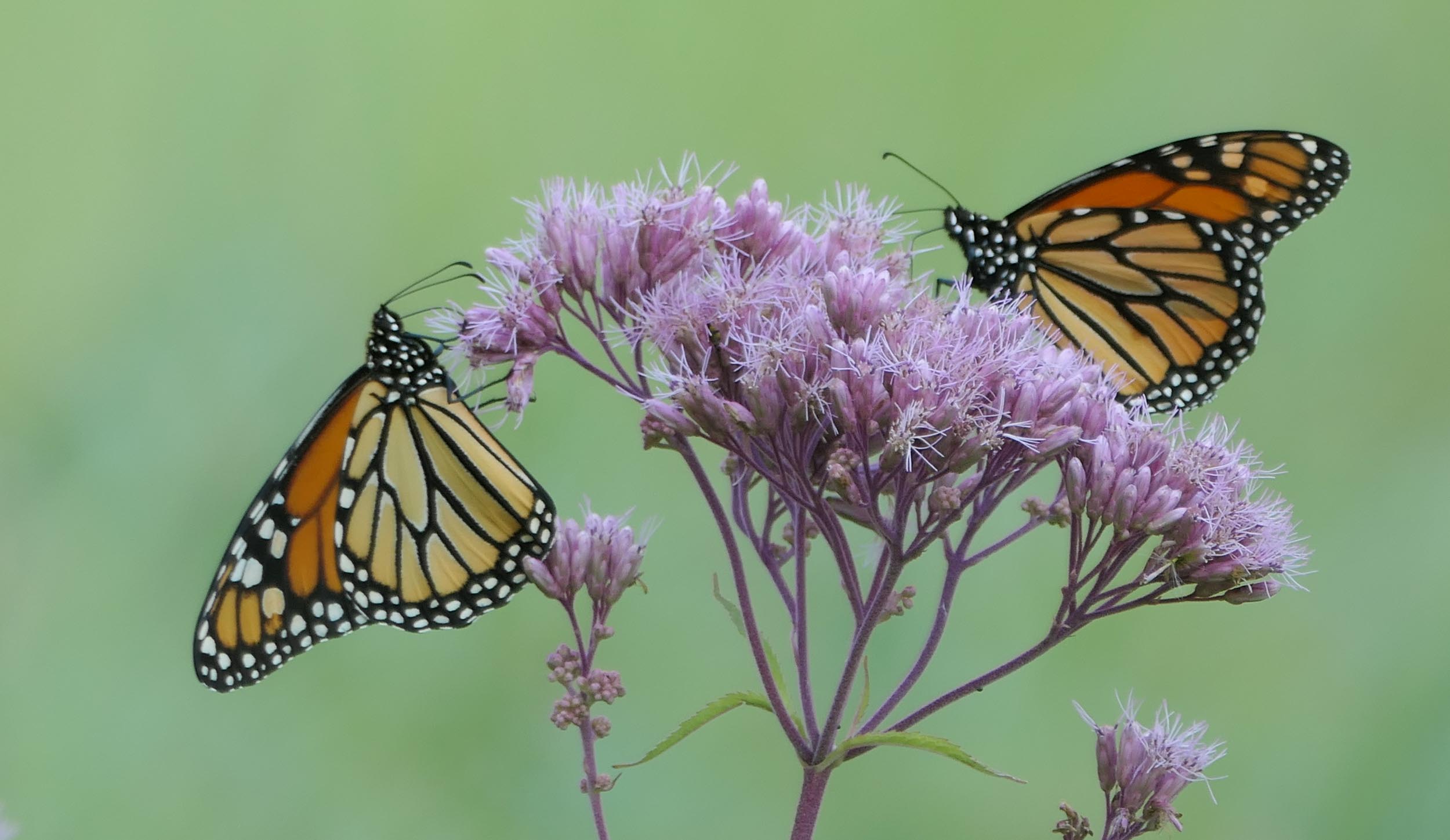 A Monarch and a worn Viceroy on Joe Pye Weed

The Monarch migration is over here for this year – we saw our last one on September 24.  We had a few good days with lots of Monarchs, but not nearly as many as in prior years. 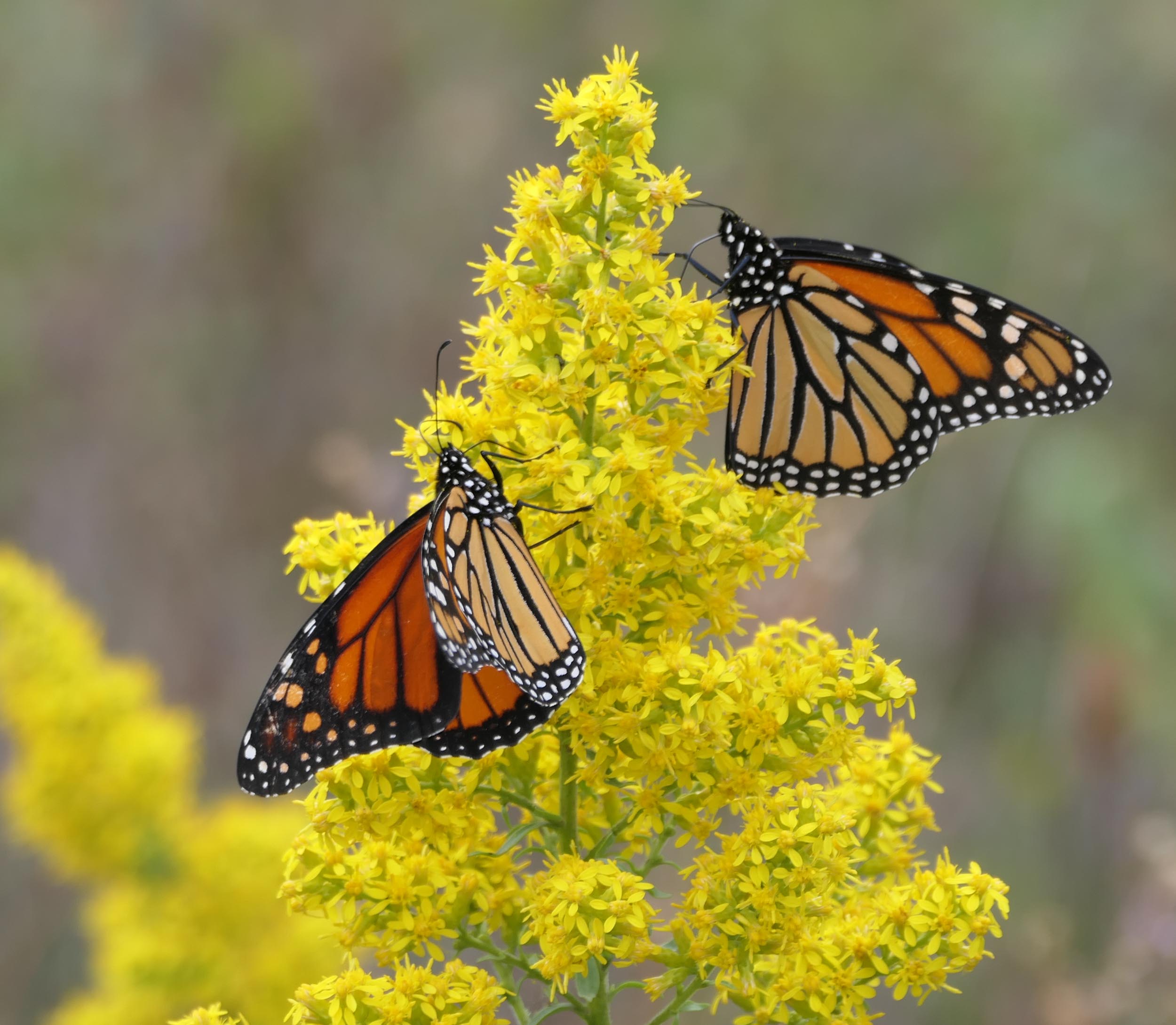 Here’s the chart Mike made – comparing the cumulative numbers in the years we’ve been counting.  (We count all the monarchs we see on our afternoon walk from mid-August until they’re gone.)  Click HERE to see a chart of the daily counts for each year. 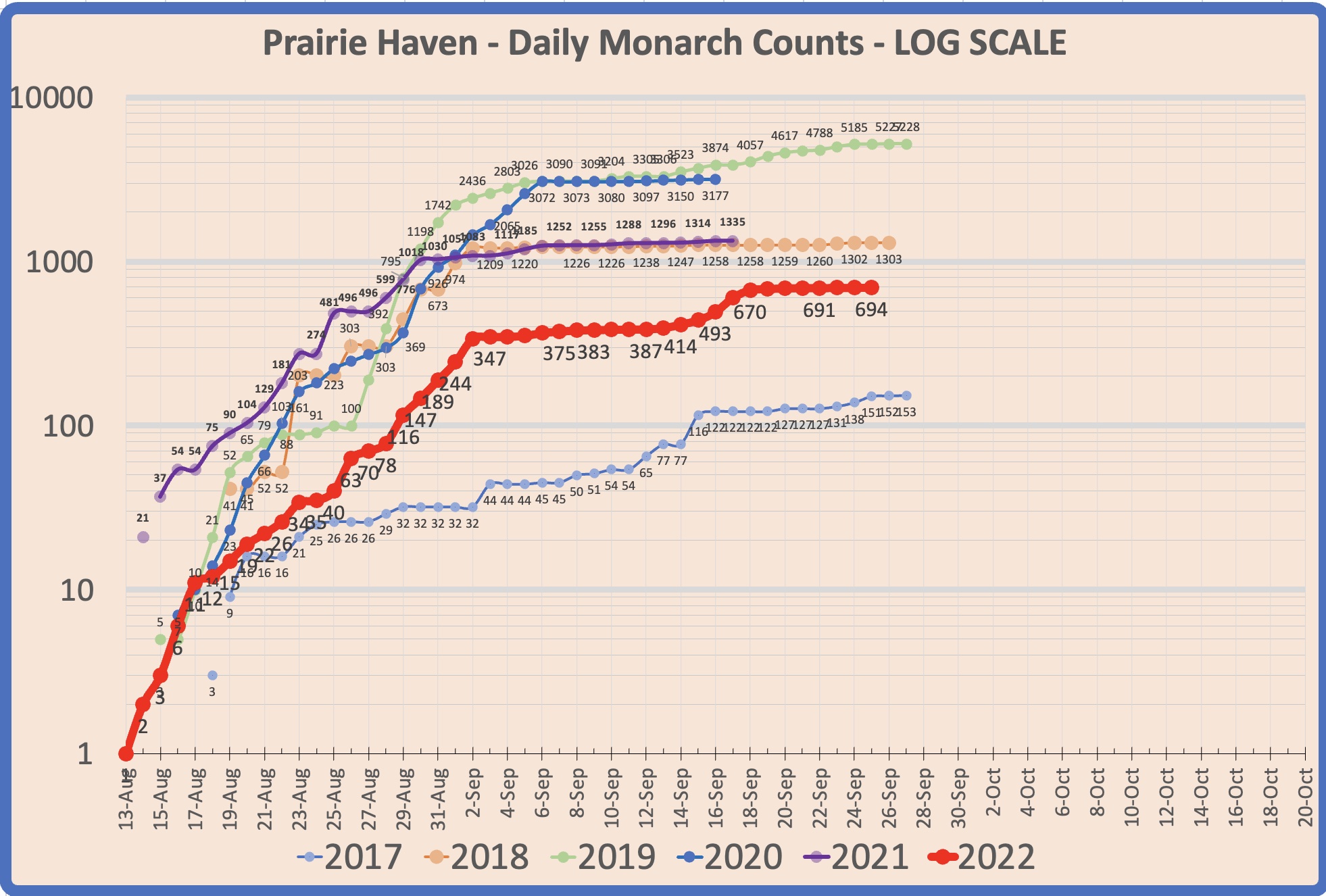 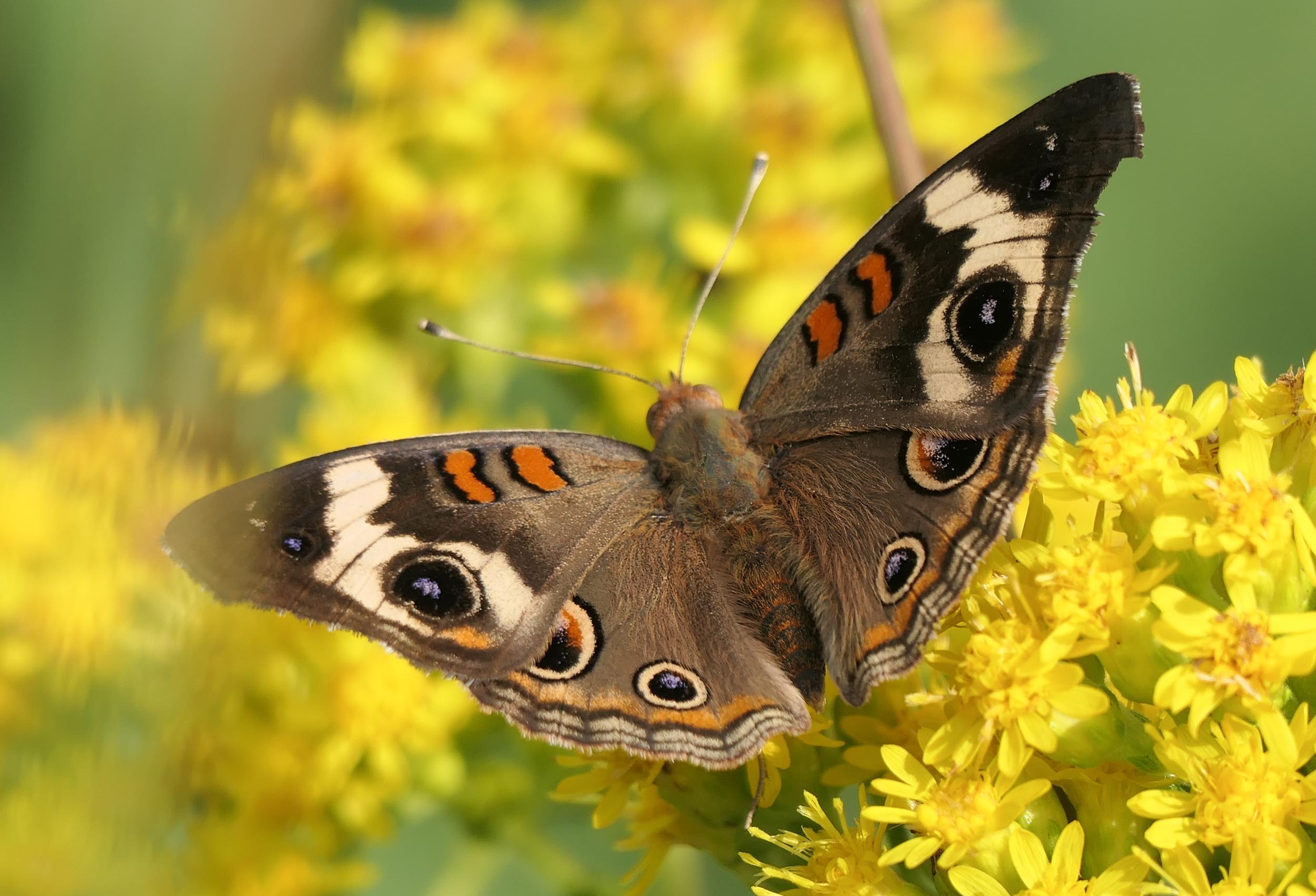 I found this unusual skipper called a Sachem – (many of the common names of skippers come from Native American words).  Sachems sometimes fly up from farther south at the end of the summer.  They can’t survive our winters. 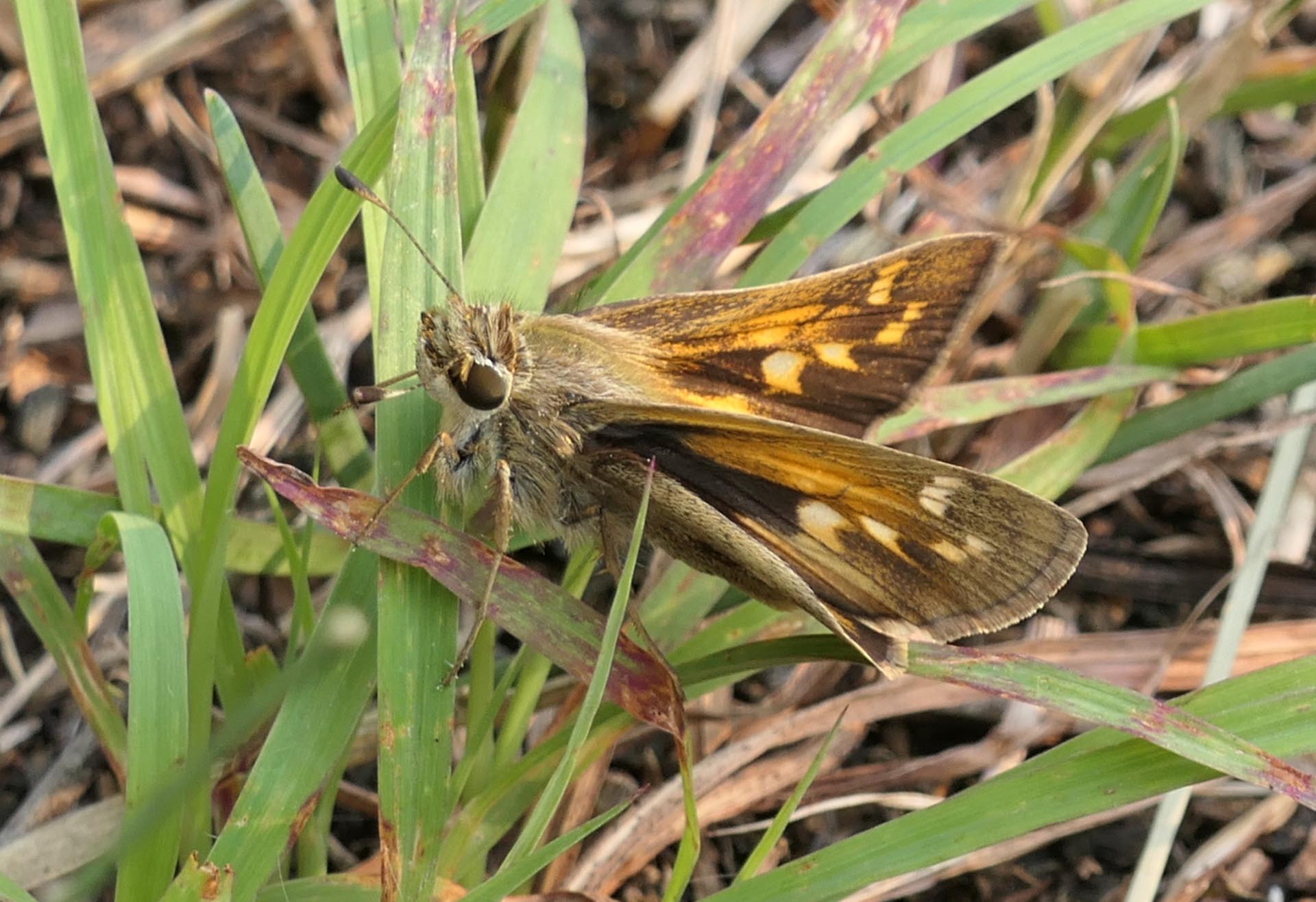 We’re starting to see more butterflies that will spend the winter as adults hiding in cracks in logs or in brush piles – this one is an Eastern Comma. 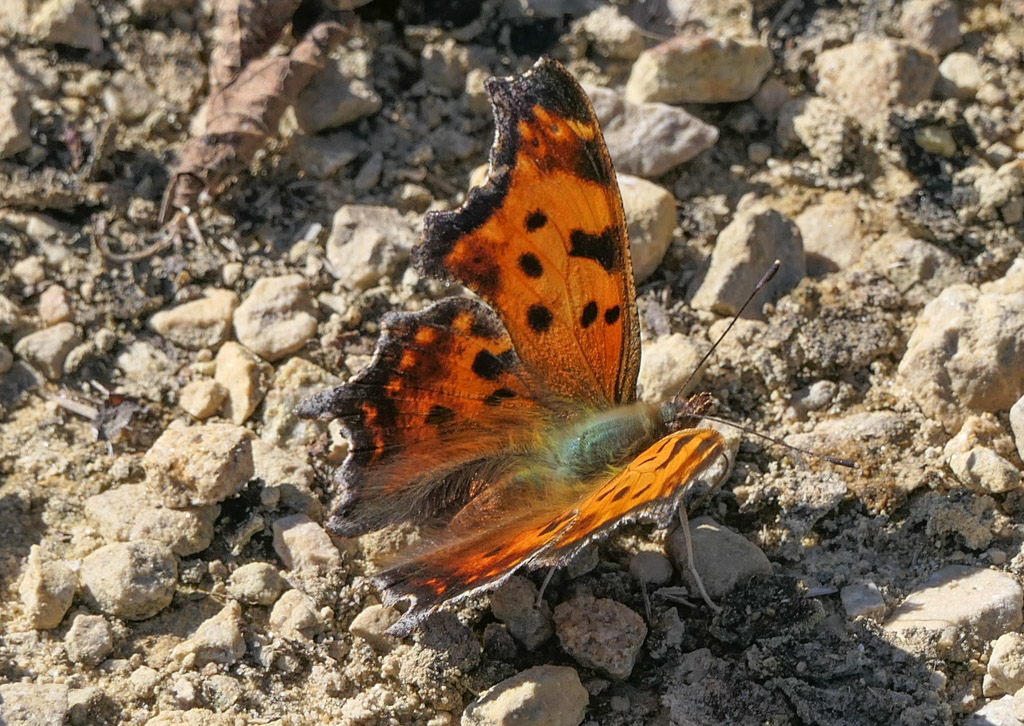 We’ve been finishing off a few summer projects, and starting on new ones for the fall.

Mike did one last mowing of our newest planted prairie on Sheep Hill Bluff.  Here’s the way it looked before this mowing – with Foxtail going to seed and Queen Anne’s Lace blooming. 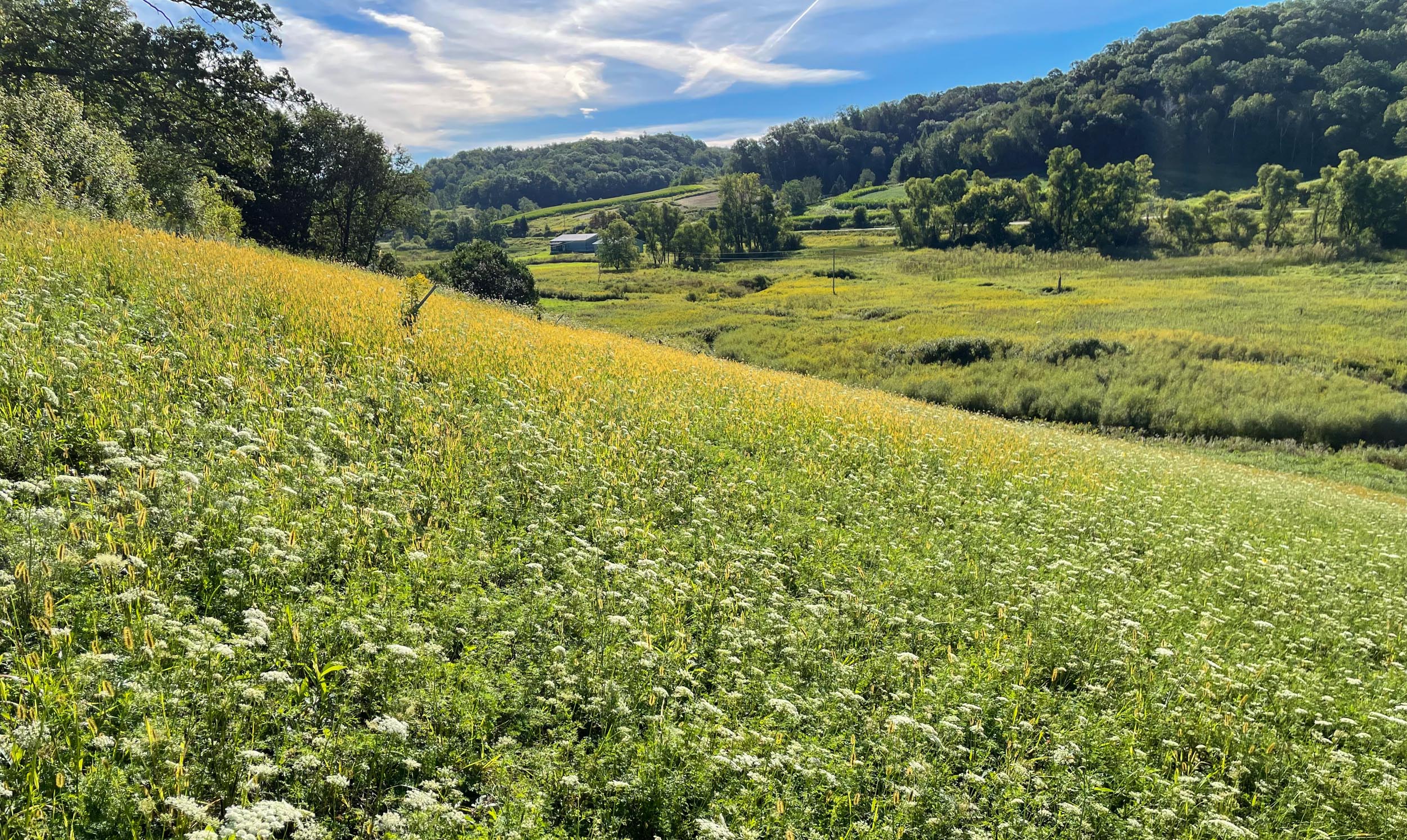 Sheep Hill Bluff Prairie has a good view of the wetland including a big curve in the creek and several beaver dams and ponds. 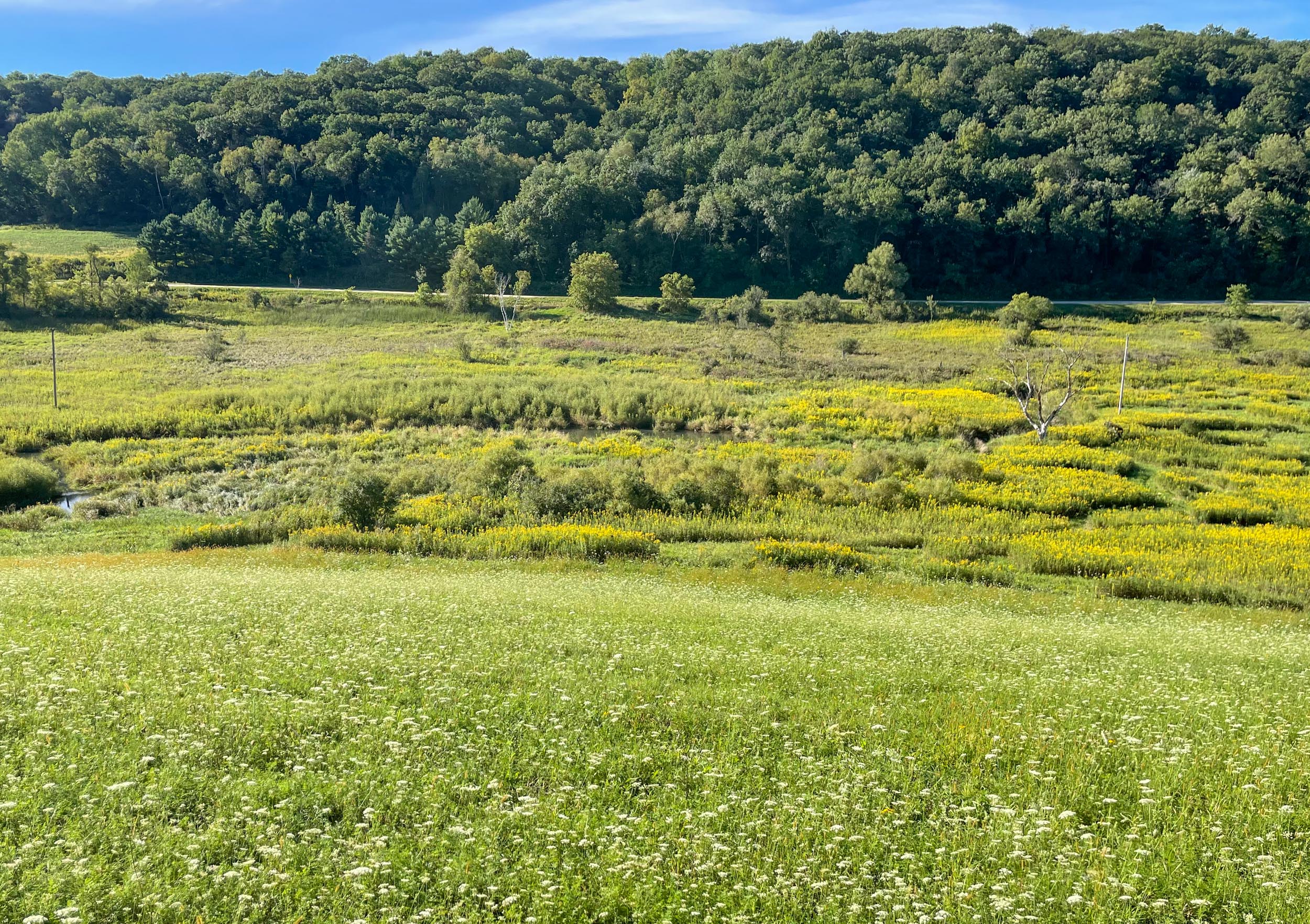 Mike mowed the field, and then took a panorama photo of that same view.

Corner View Prairie is a tiny bluff prairie just west of Big View Prairie.  I’d never done much clearing work there, so it has become very overgrown with brush and small trees.  I did a little work on it a few weeks ago, and hope to do more this fall.  Here’s a before and after of what I’ve done so far. 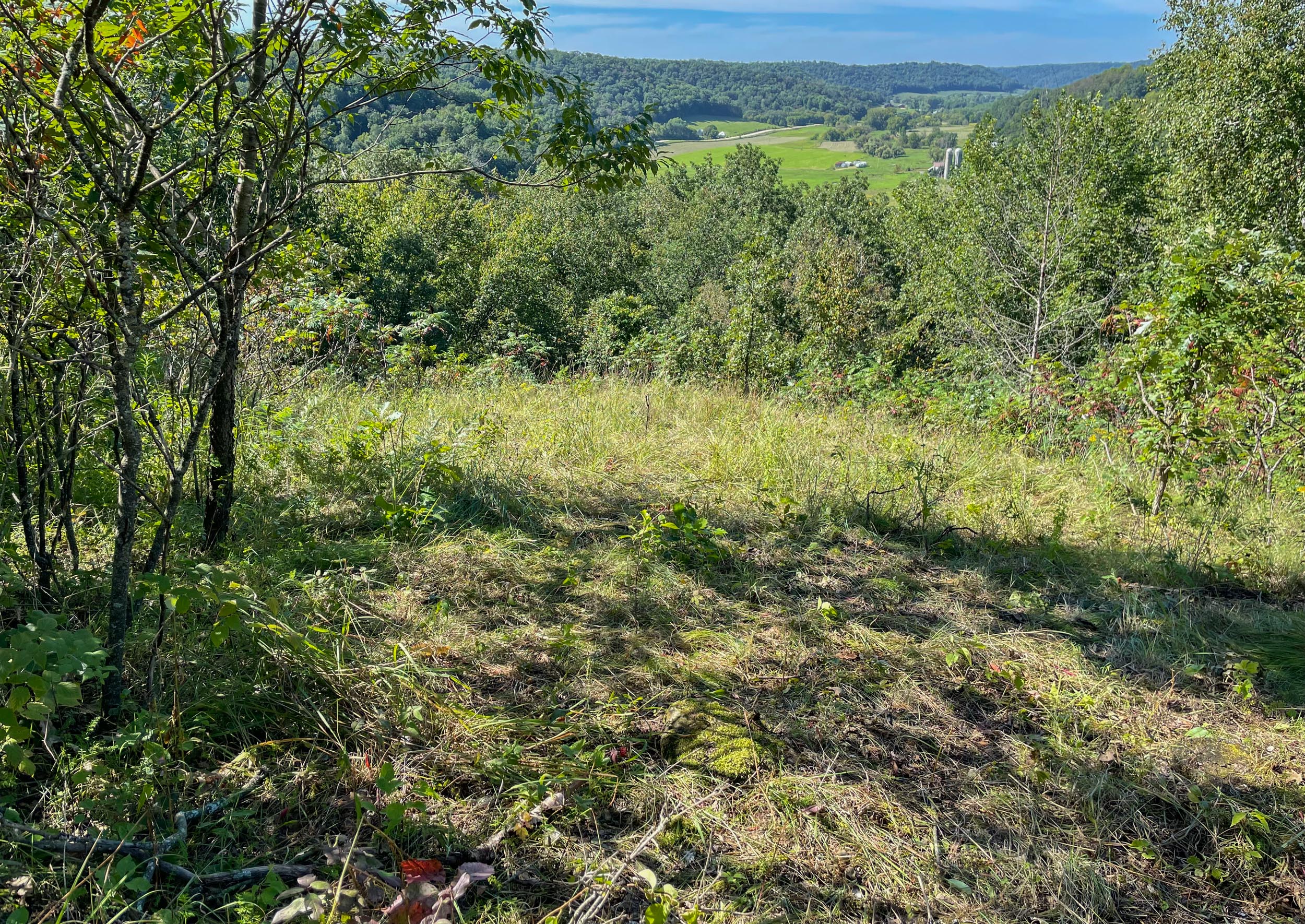 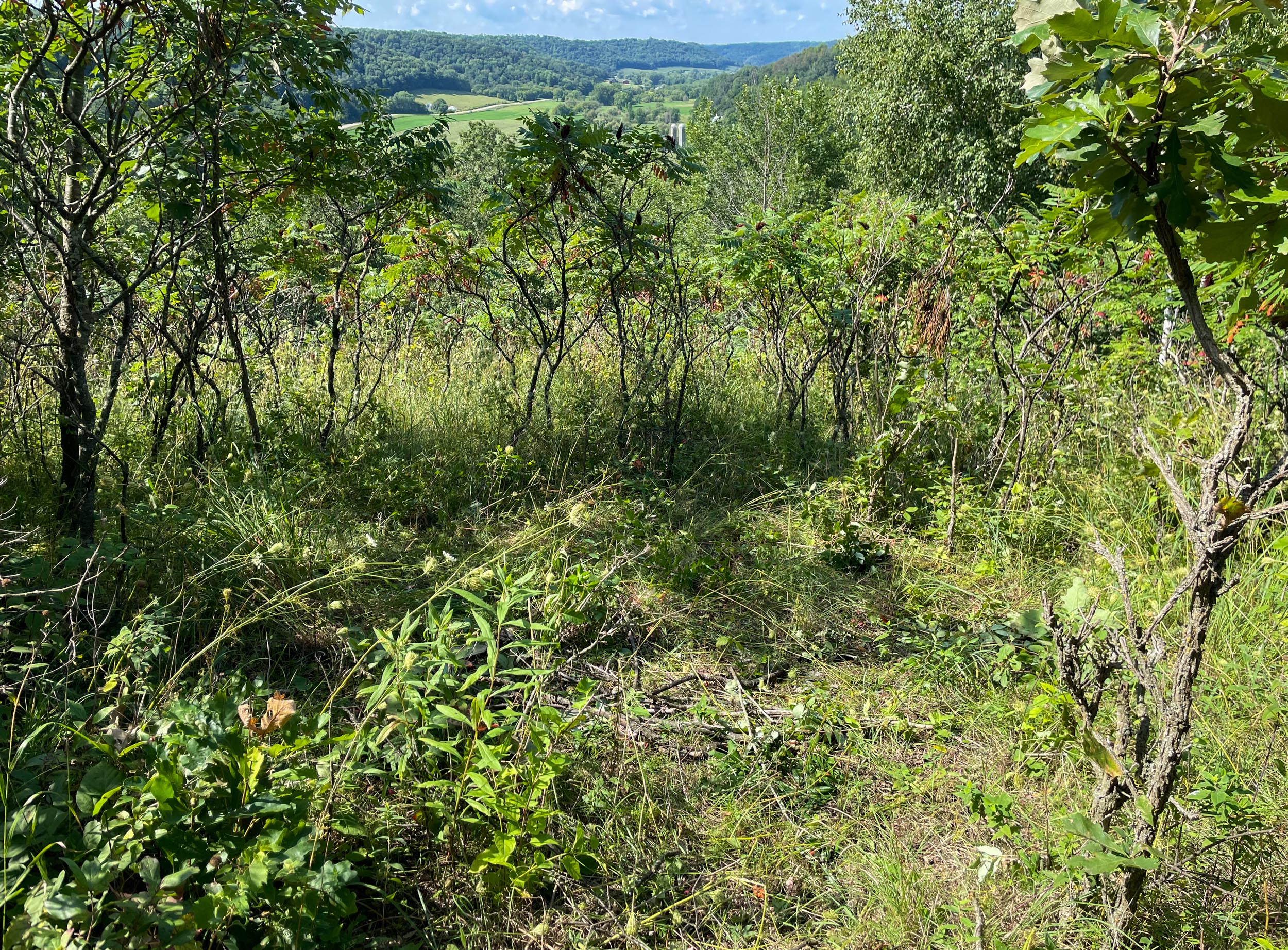 I’ve been working in the Knife Edge Prairie – cutting and treating some of the brush that keeps creeping into the open prairie.  This remnant has some of the most beautiful fall flowers – Blazing Star, Showy and Stiff Goldenrod, and now Asters. 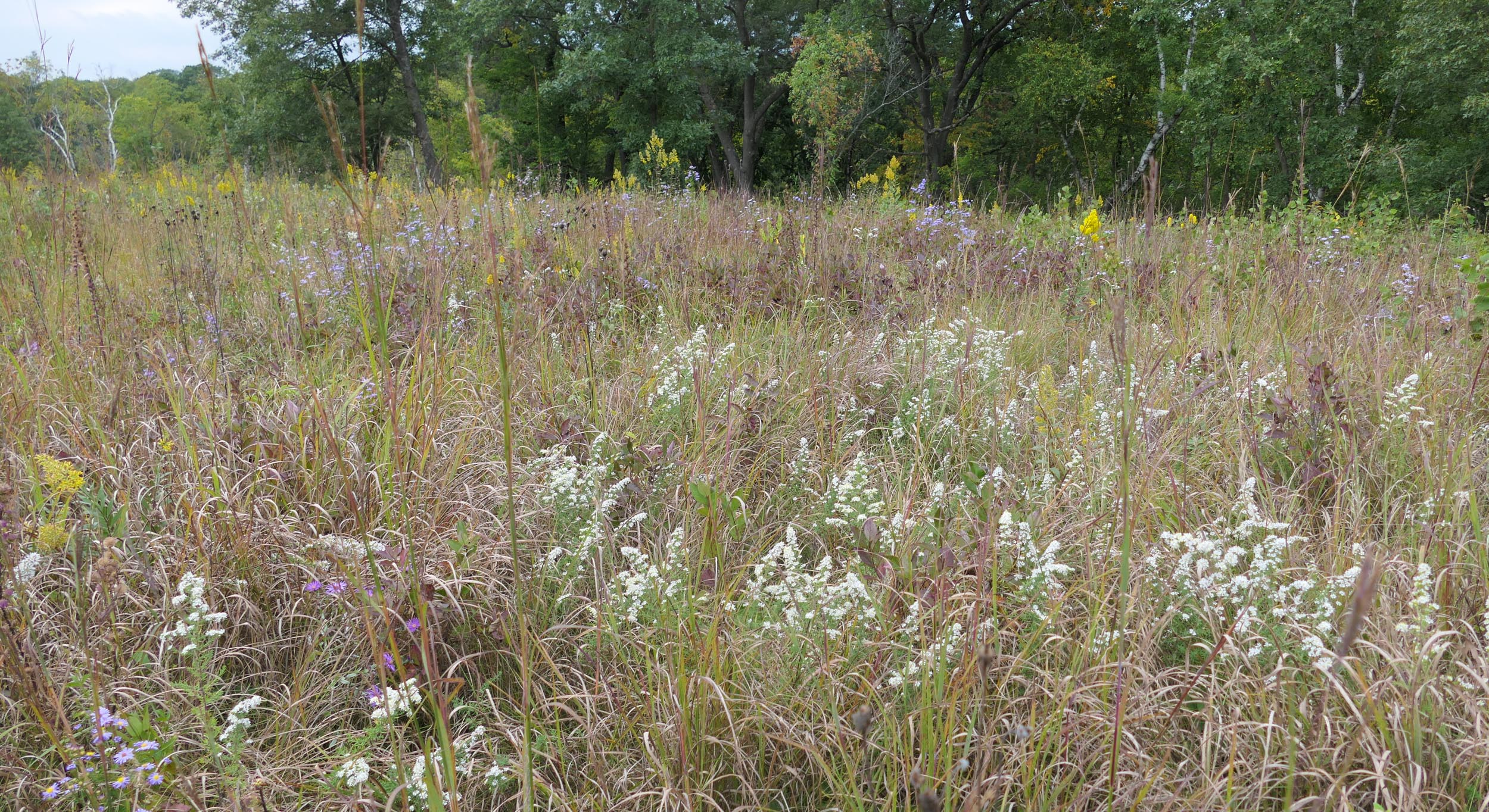 One of my favorite fall asters….Silky Aster 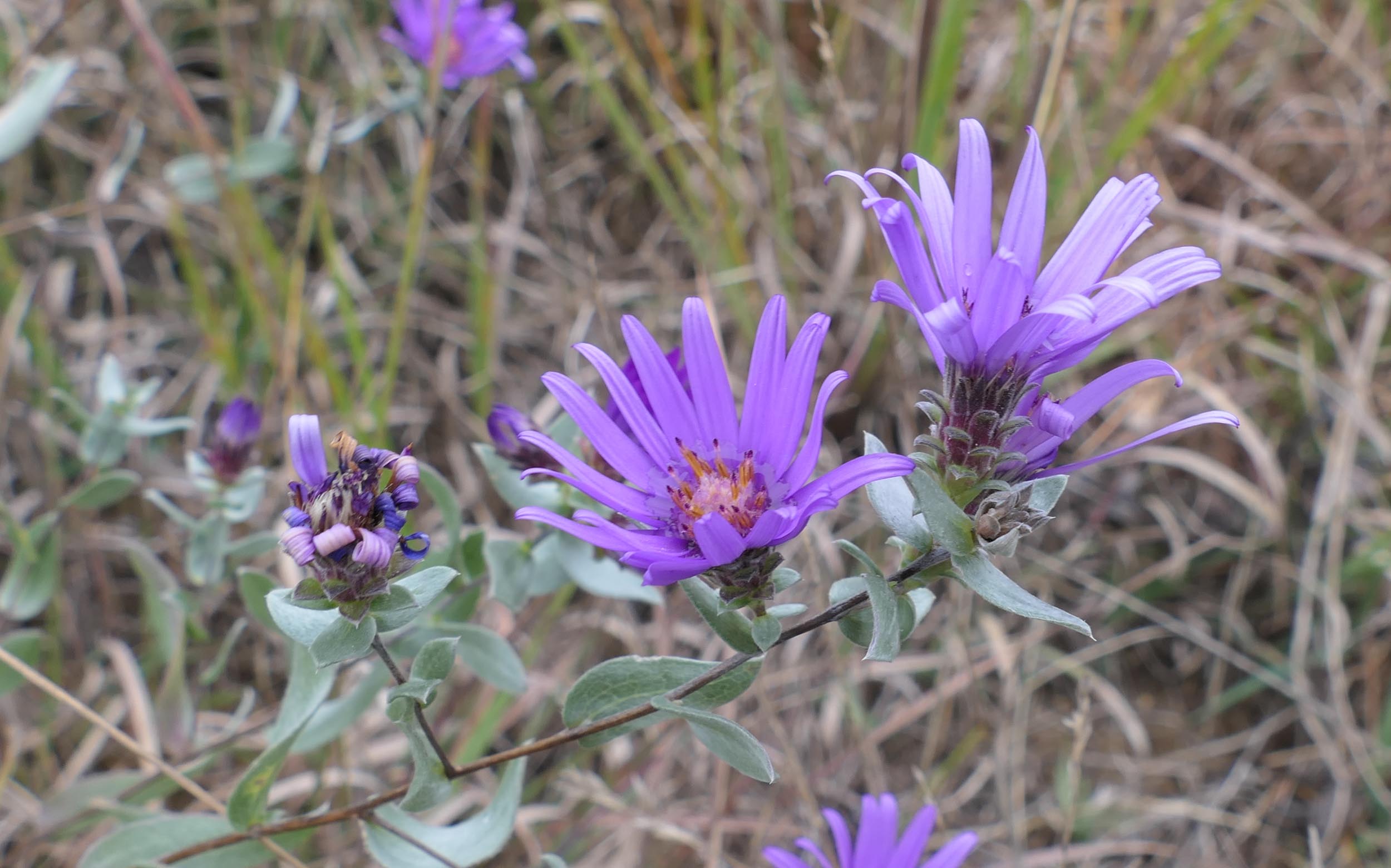 I’m also working on the Knife Edge Point – on the steep west-facing slope.  There are parallel paths that run horizontally along the slope that were made by the cows in the days when this was a dairy farm.   They’re very helpful now – they keep me from sliding down the hill as I work. 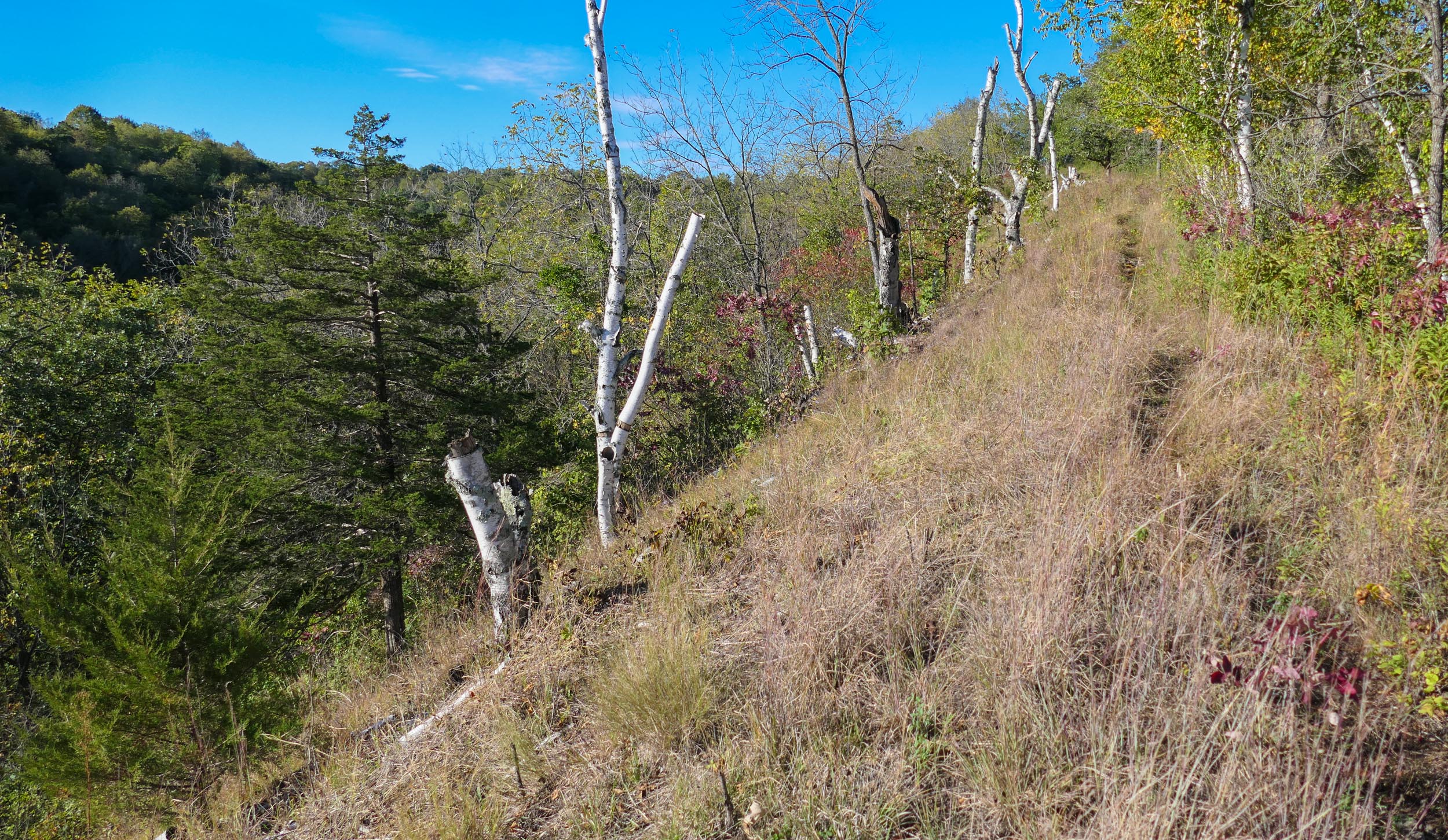 Here’s a before and after series of my work on this hill.  The left photo is from 2005, when the slope was covered by a grove of birches.   The other two are from last week – before and after I did some clearing of brush and small cedars. 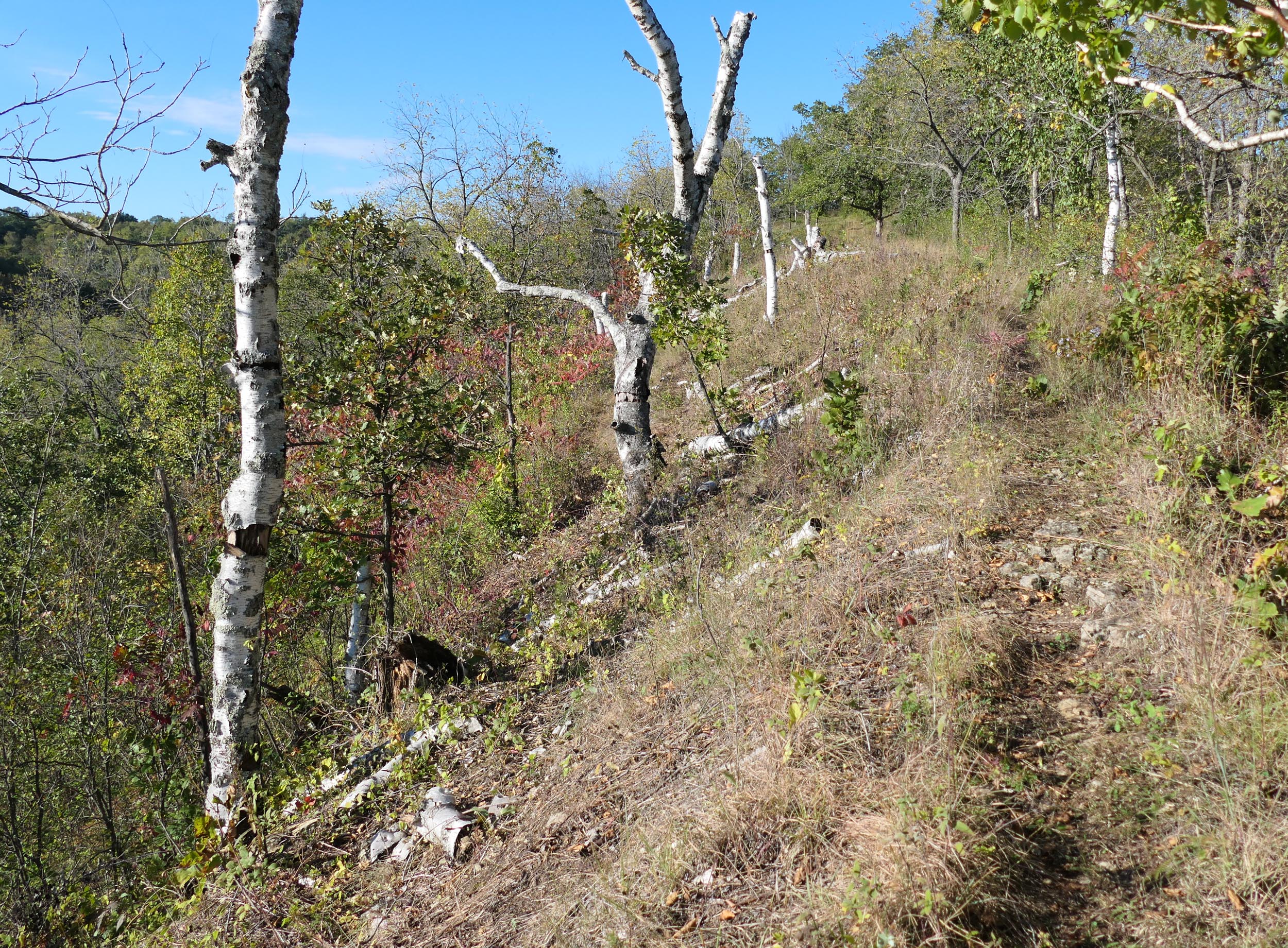 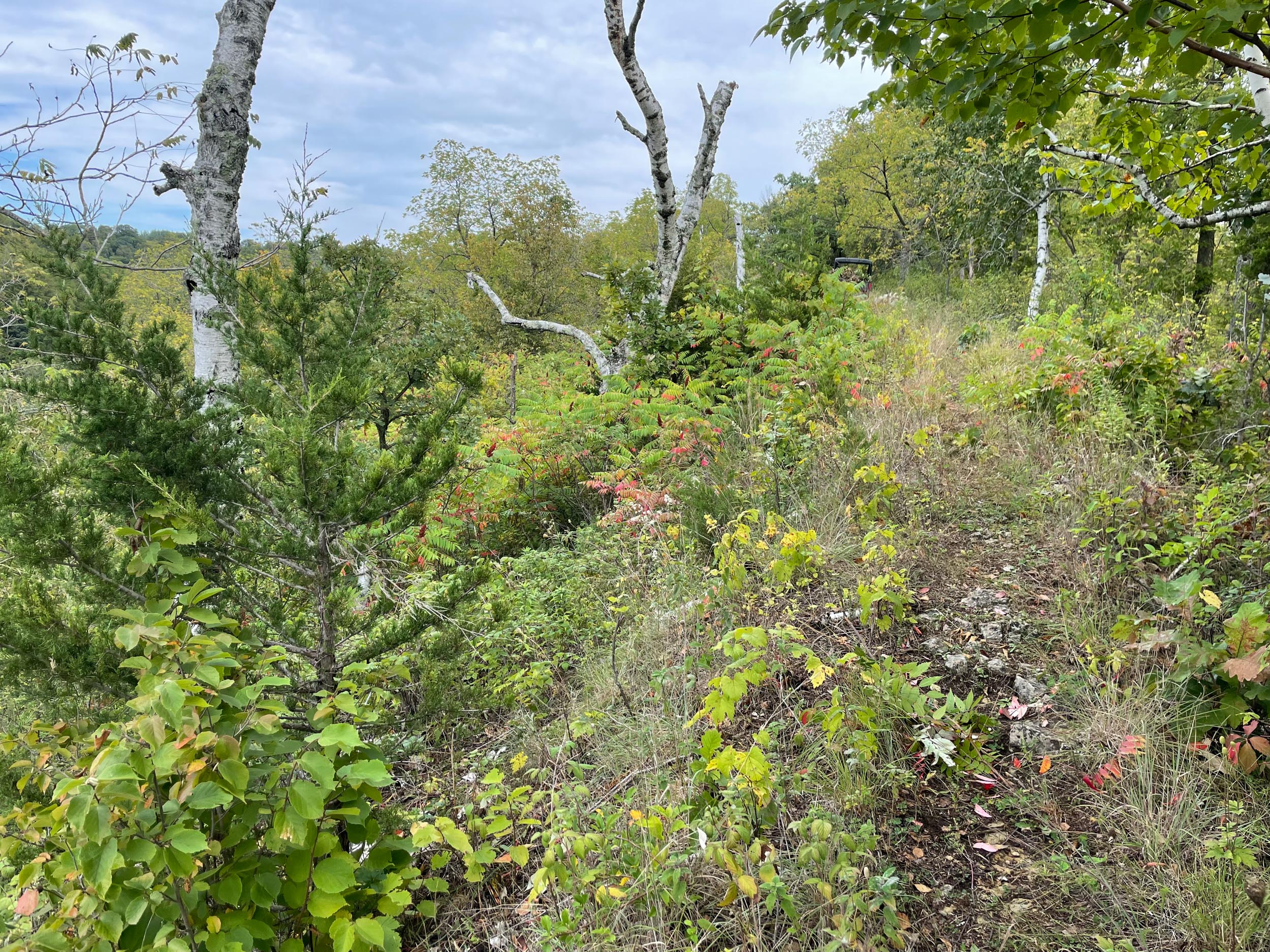 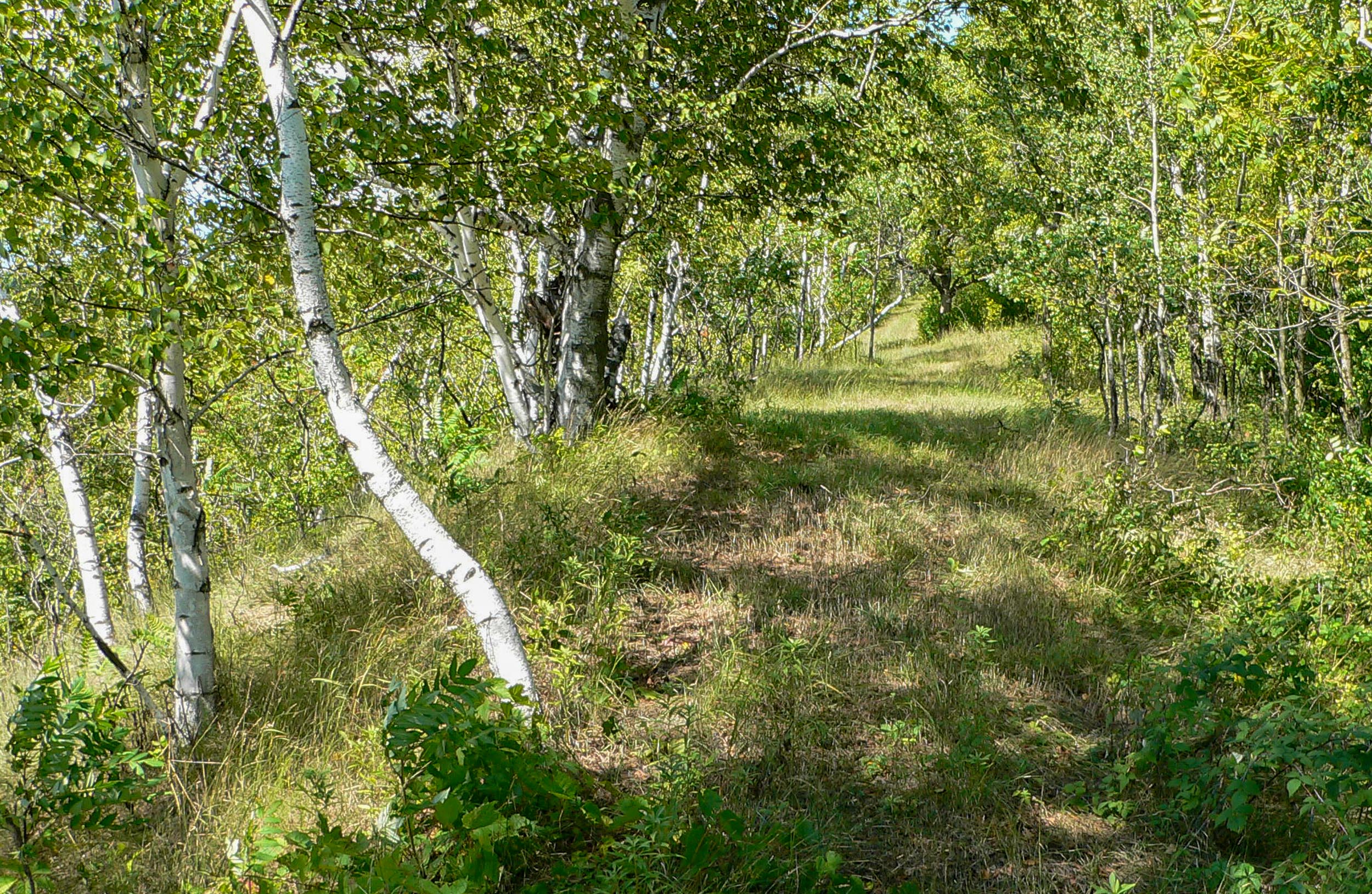 A few weeks ago I spent a little time on Sumac Prairie, our largest and steepest remnant prairie.  I was looking for Northern Flower Moths – small day-flying moths that only fly for about a week in early September.  We have a small colony of them, and every year I check to be sure they’re still there.   They’re easiest to find early in the morning when they’re resting on aster flowers.

As long as I was there, I decided to cut and treat some of the sumac.  There’s more sumac on Sumac Prairie than on any of our other remnants, and I don’t work on it often because the hillside is steep and hard to get to.  Here’s a before and after of one spot I worked on.  There’s plenty more to do! 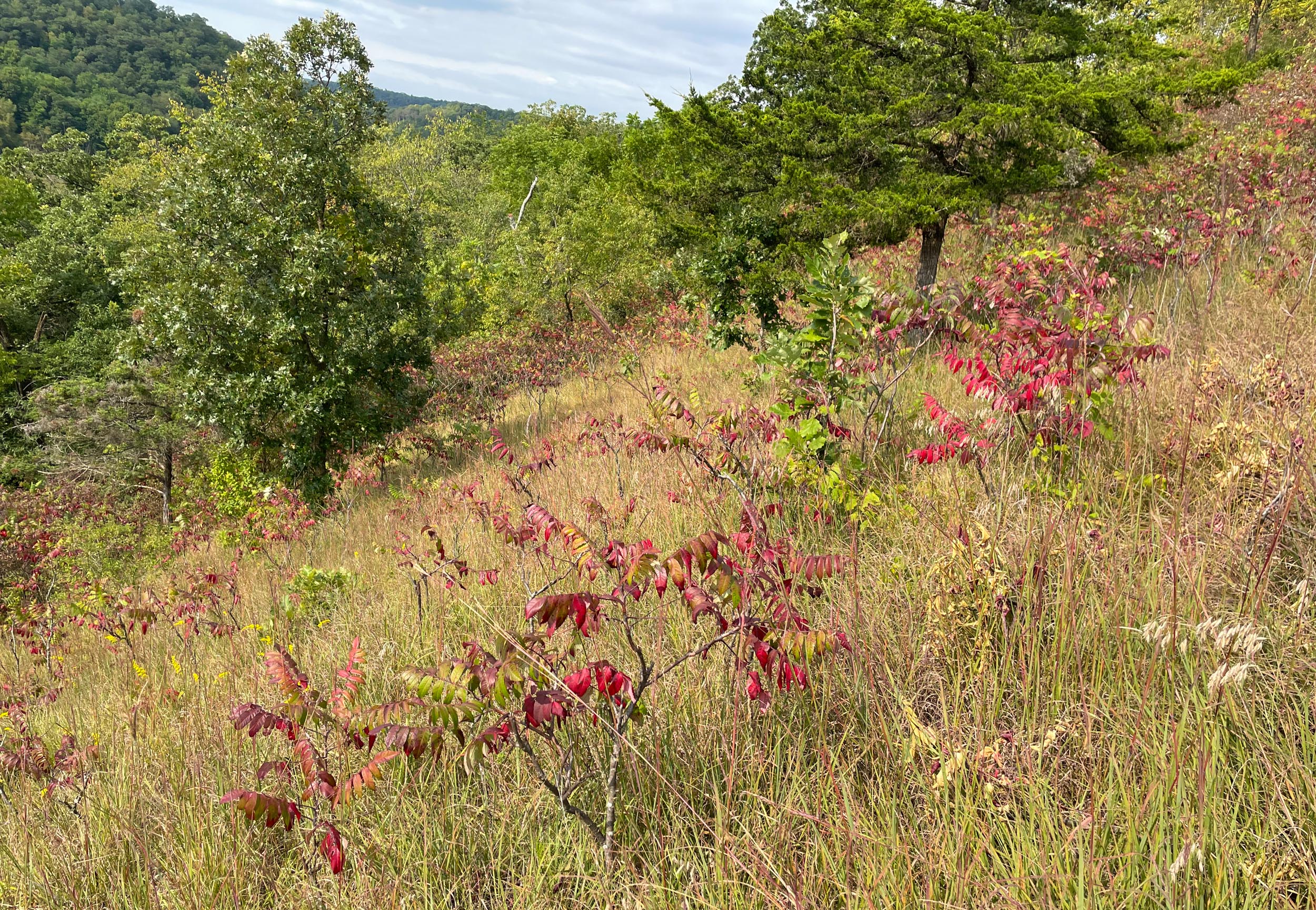 We had an exciting encounter with a snake on one of our walks.  A large Eastern Hognose Snake was sitting in the middle of the path.  As we tried to figure out how to get around it and to get a better look, it raised and flattened its head, curled its tail and started to hiss.  It was a very convincing scary display – I’m glad we knew it wasn’t dangerous.

This is when we first saw it – before it got upset.

Here it has flattened its head, and it’s flicking its tongue and hissing. 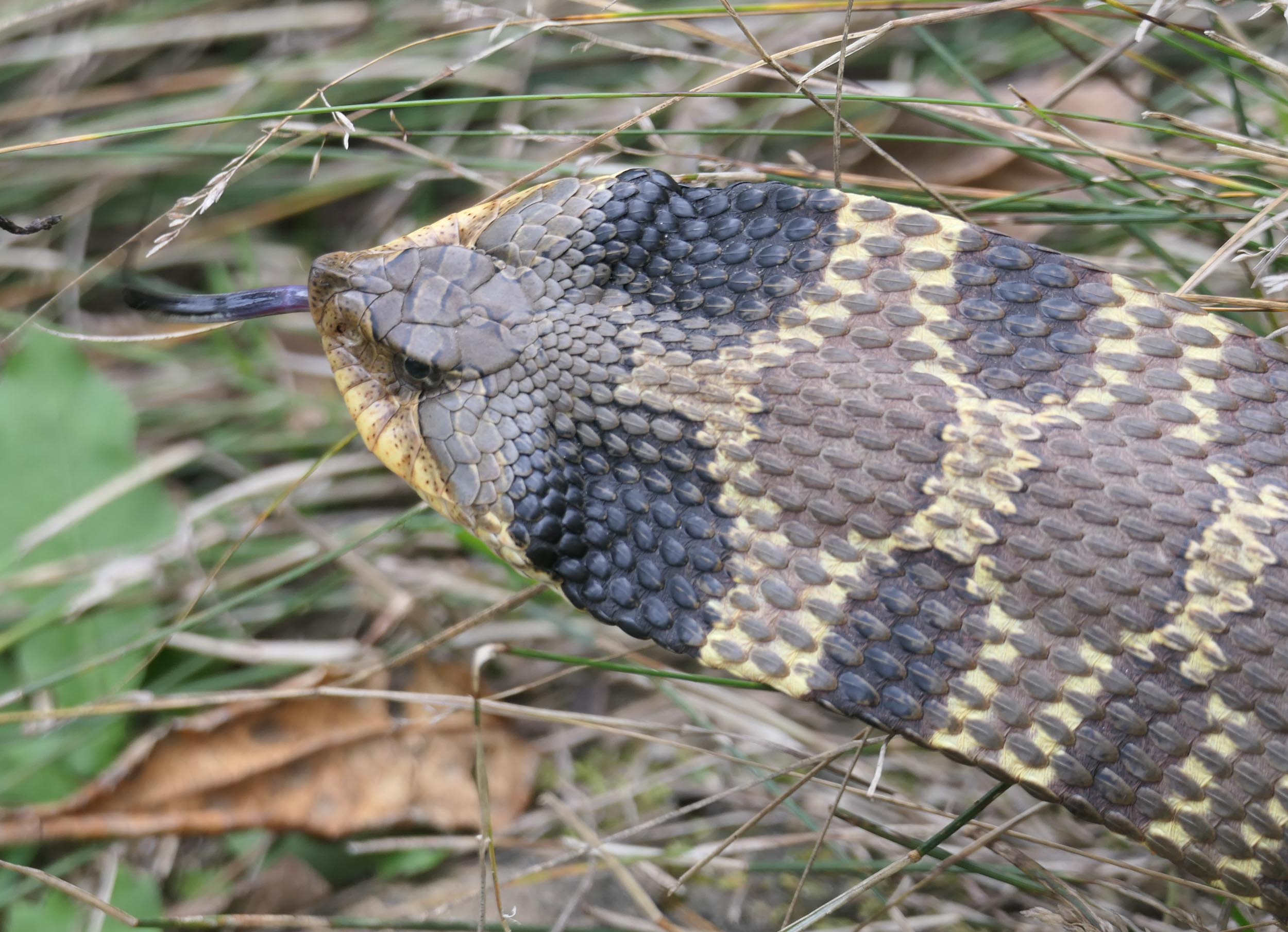 Here’s the whole snake while it was trying to scare us.  Its whole body was spread out so it looked wider, and its head was raised.

Another – less exciting – encounter.  A Ruffed Grouse marching across a trail. 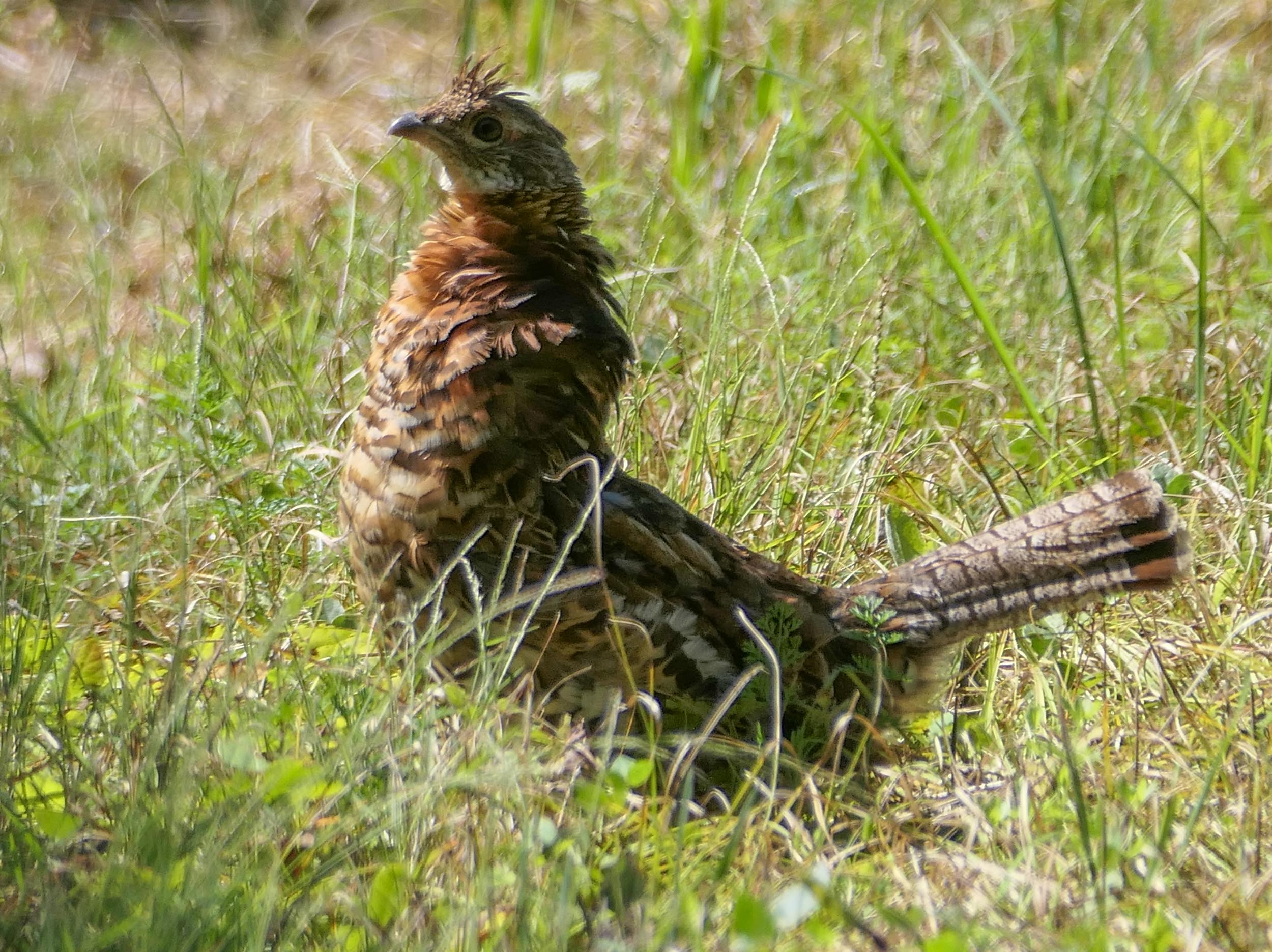 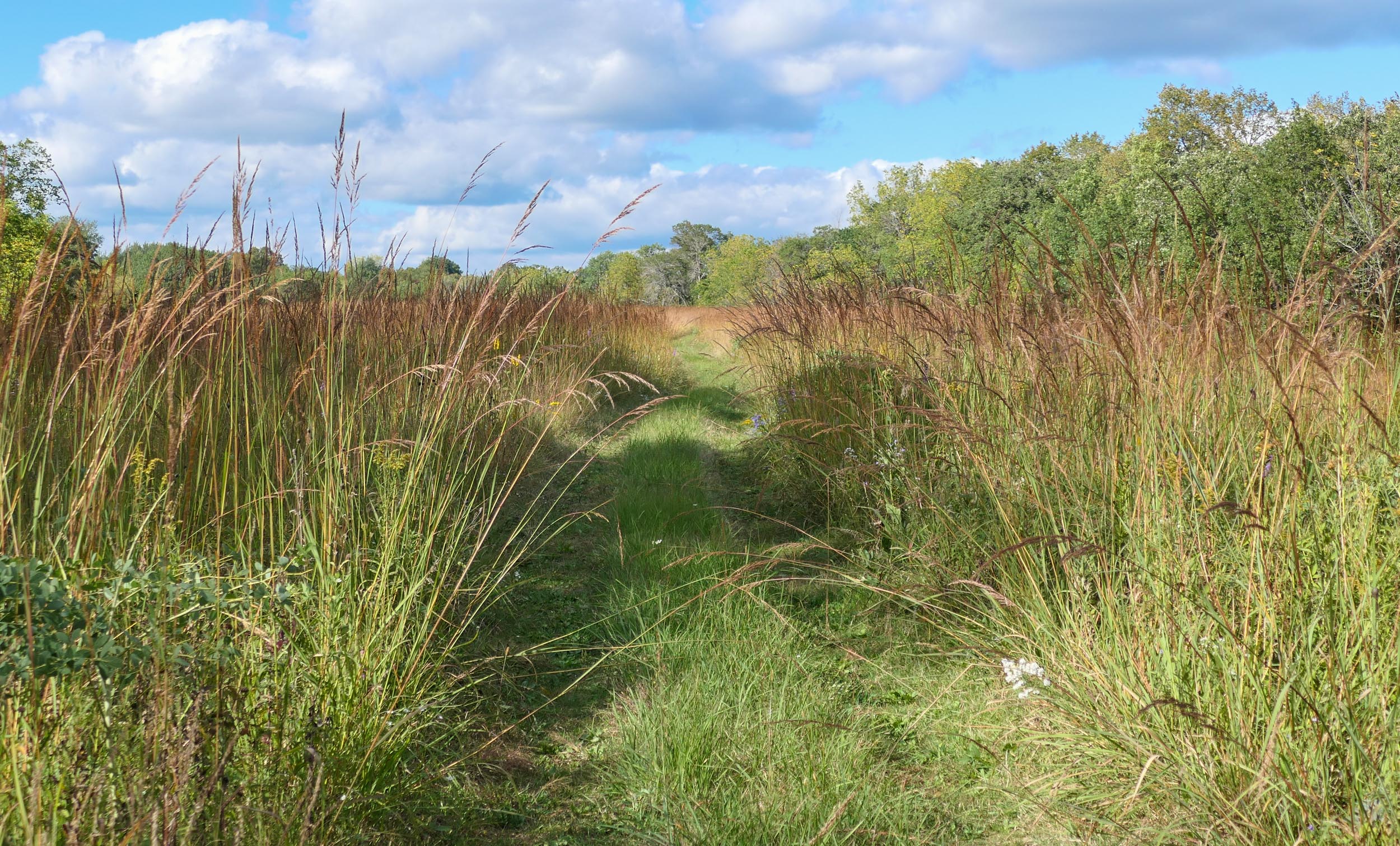 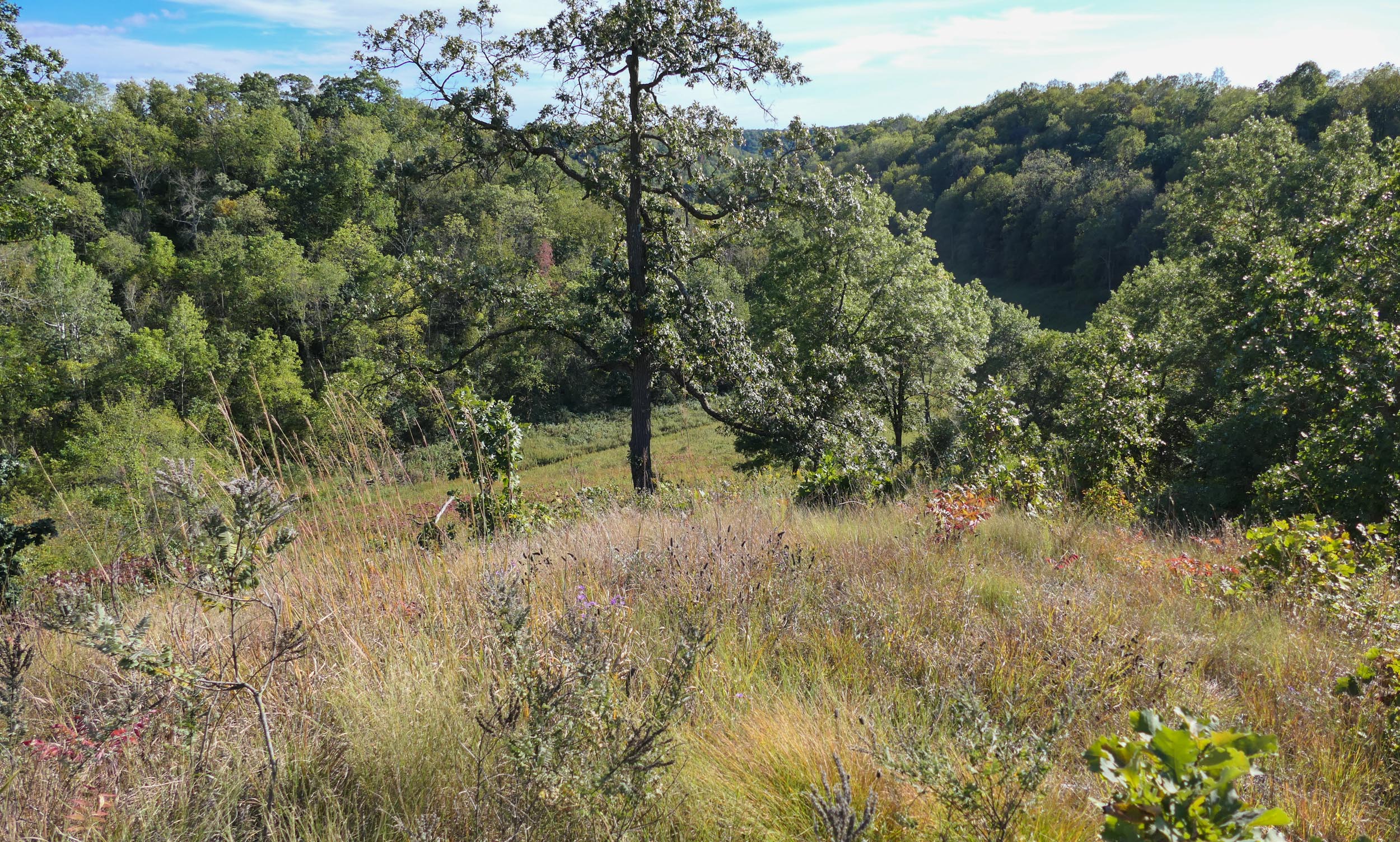 The ravine that runs beside the driveway – I love the way the setting sun shines through the trees. 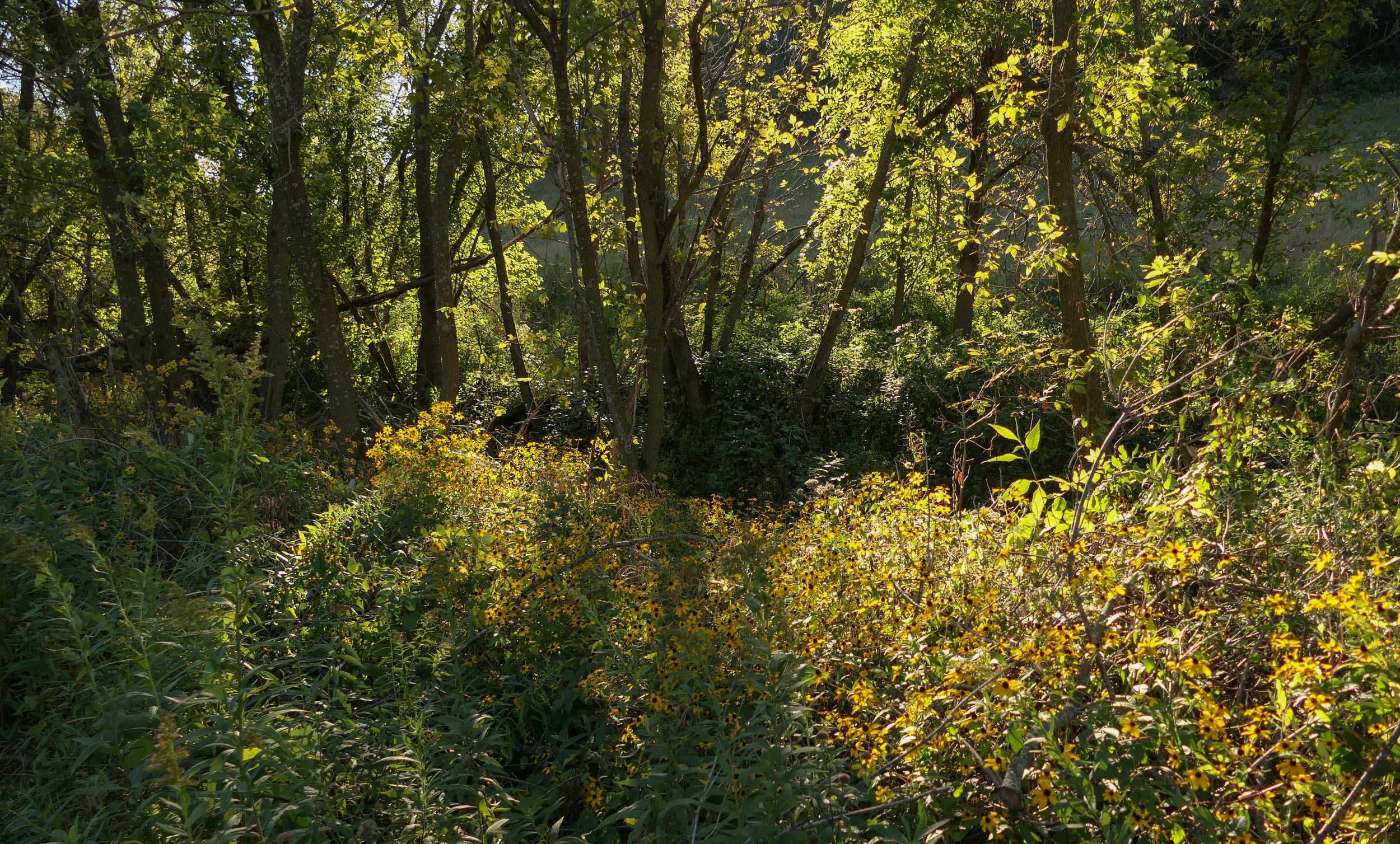 Hill above the house

I got up to the Knife Edge one morning before the mist had disappeared from the valley. 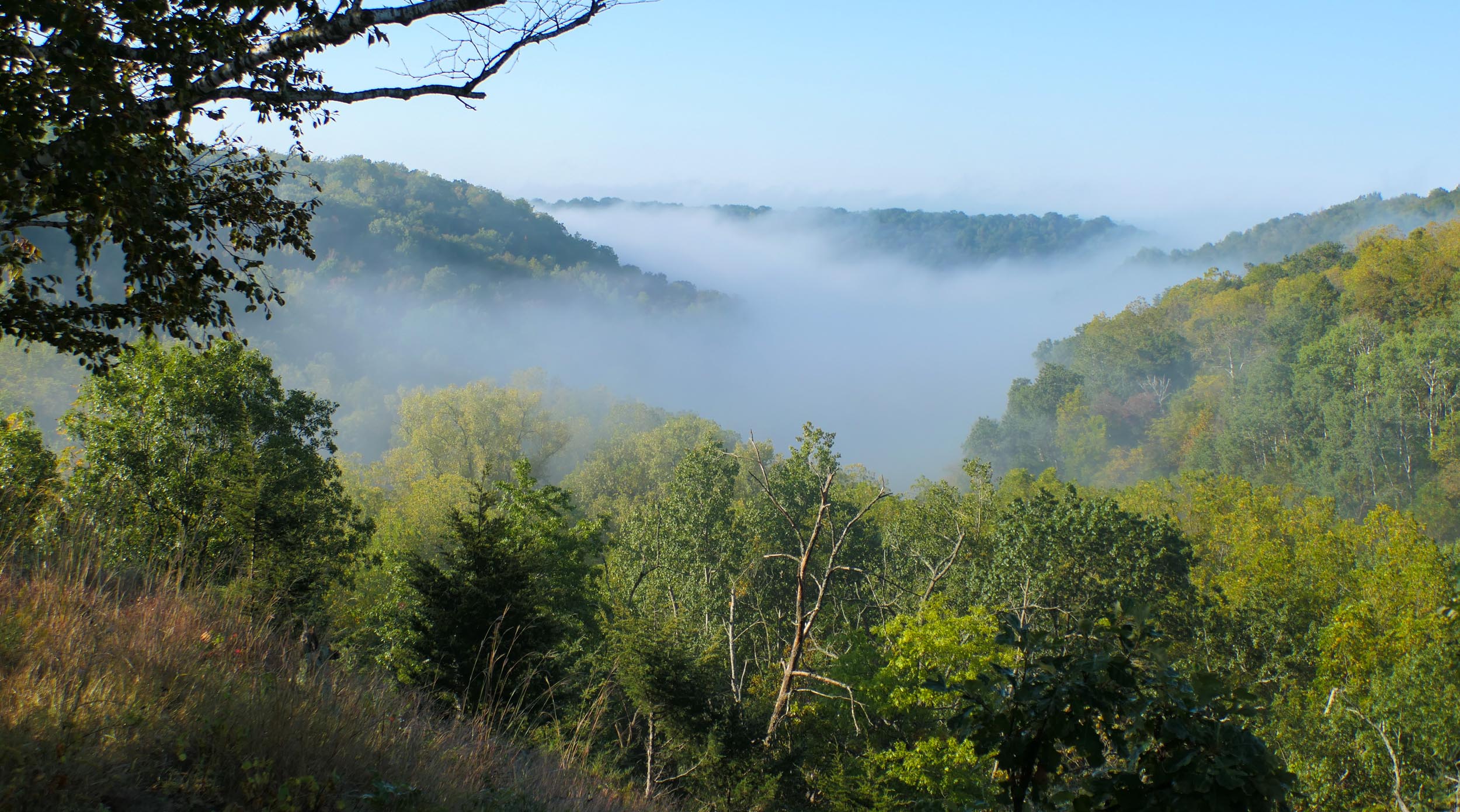