This is the season when winter and spring take turns.  Some days it looks and feels like winter, and other days have the feel and smell of spring.

We’ve finally started taking our long afternoon walks on top of the hills again.  Deep snow means difficult walking on those paths, so in the winter we stick to our plowed driveway.   It’s fun to see the rest of our landscape again.

The prairies on top still had snow when we started walking, but now it’s mostly gone. 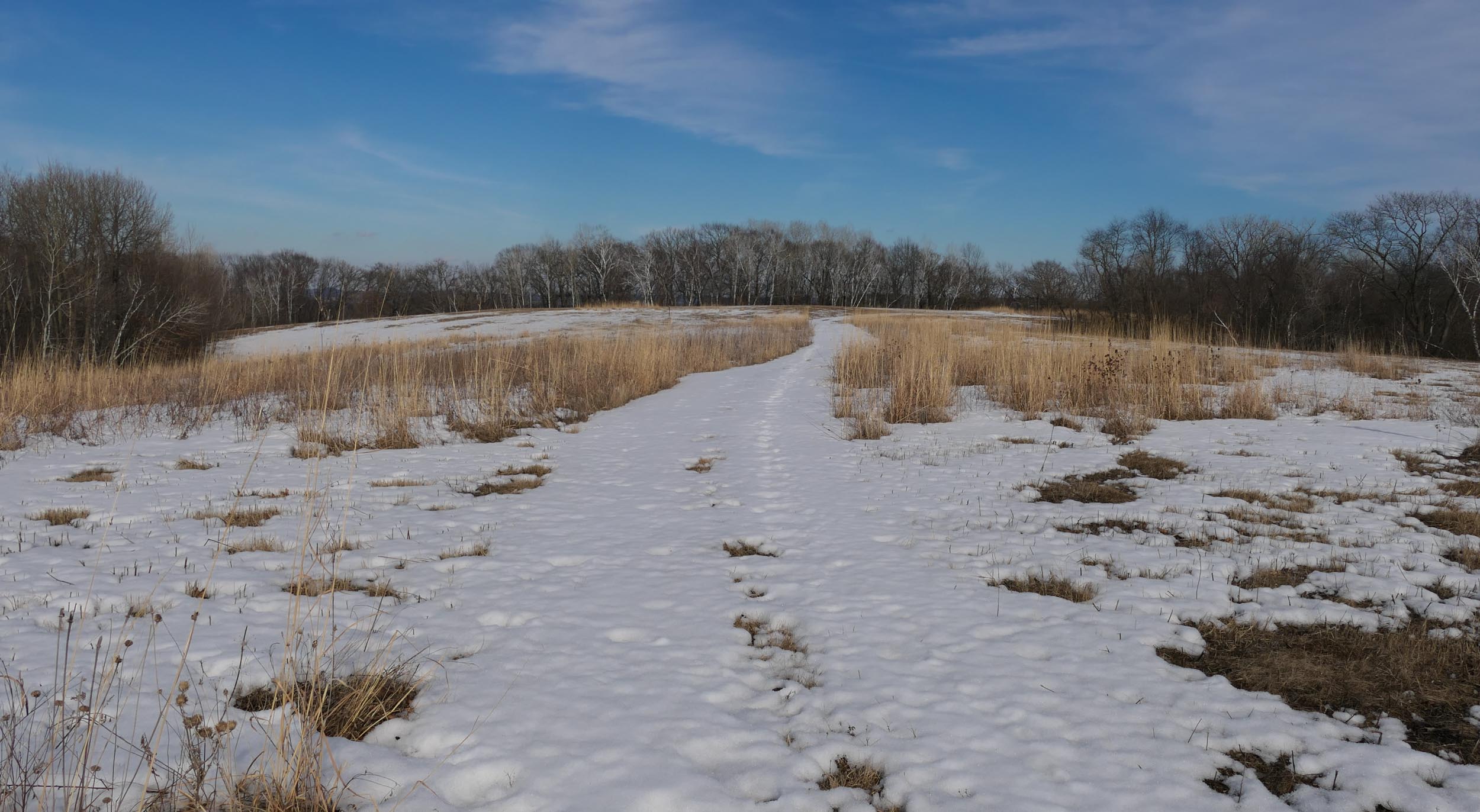 Sitting on the bench at Hidden Oaks – the first time this year. 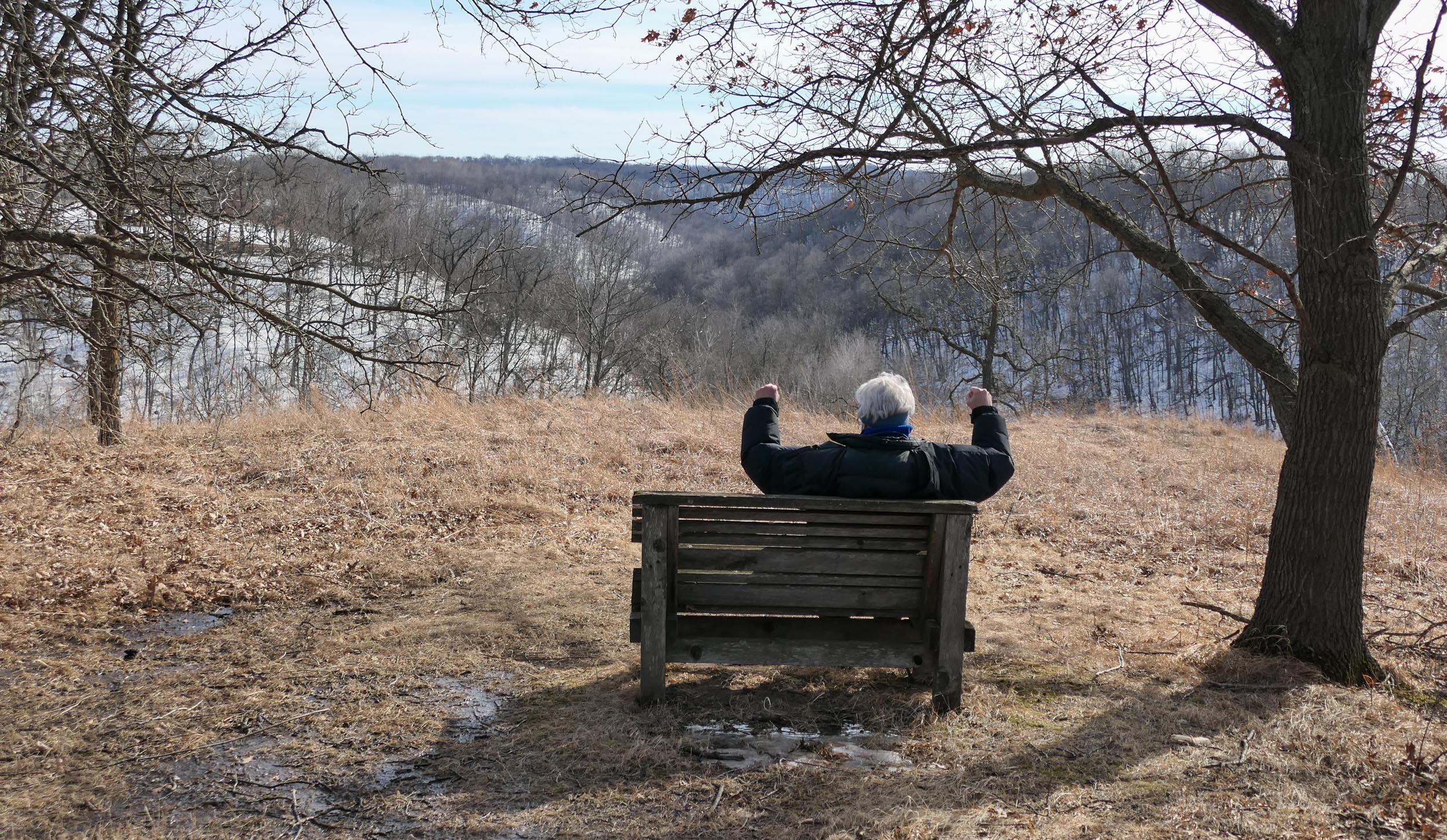 Pine Point – the morning after a snowstorm… 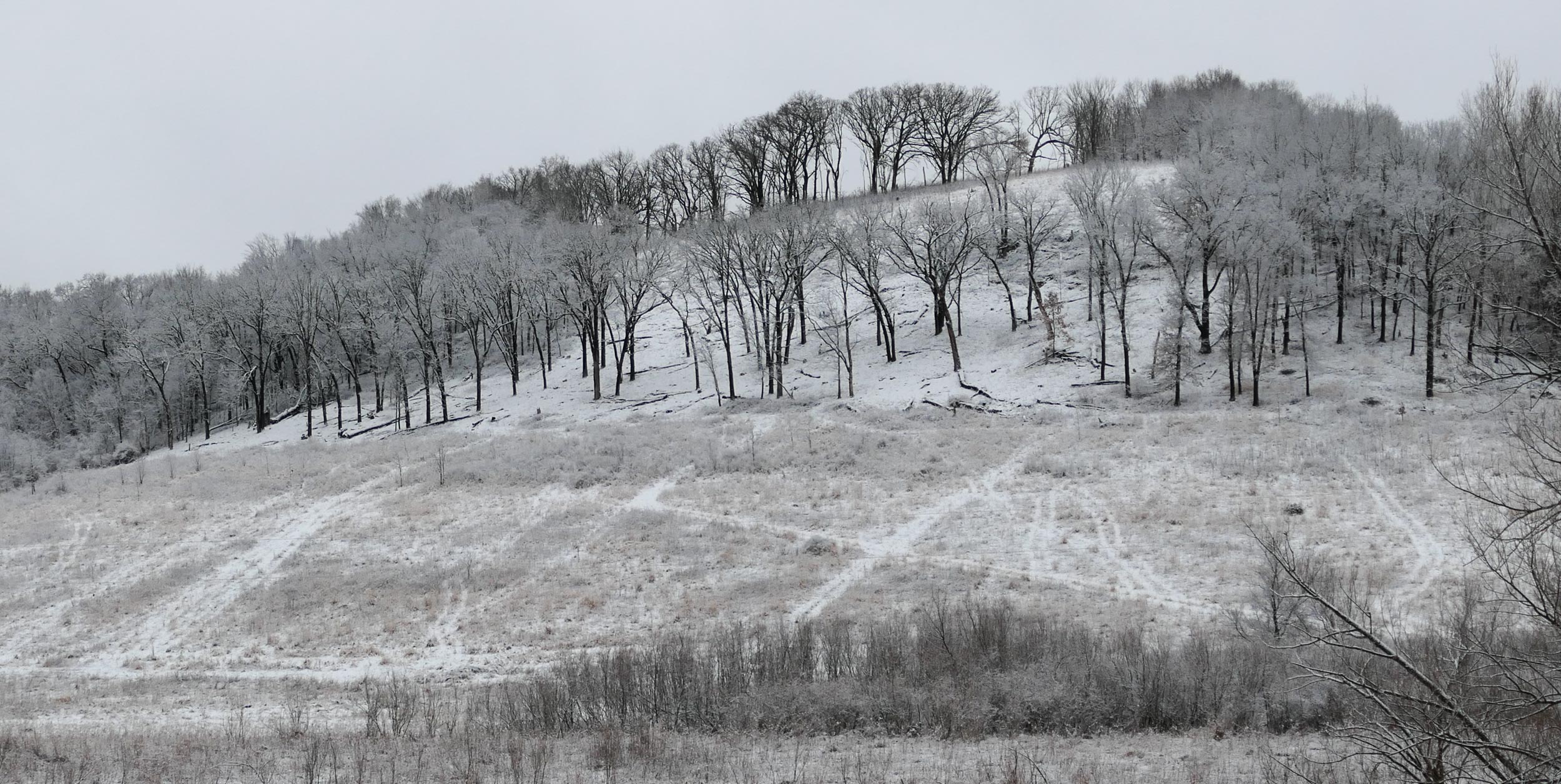 …the same view later that day.

Pine Point is where Erik and Beth from ‘Kule Region Forestry worked this winter.  They cleared a lot of the smaller trees and brush from a big part of the point.  Now it really looks like a savanna. 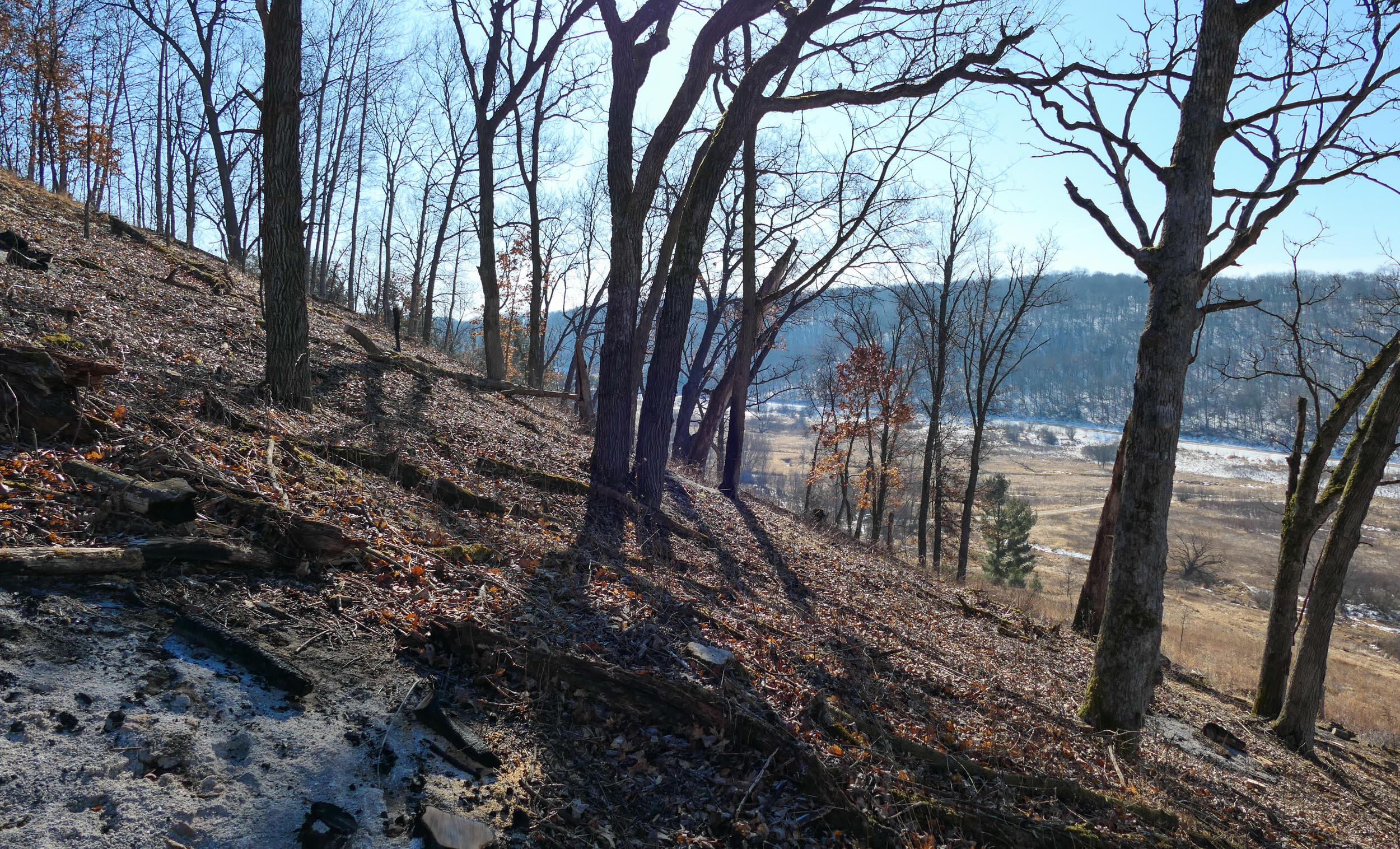 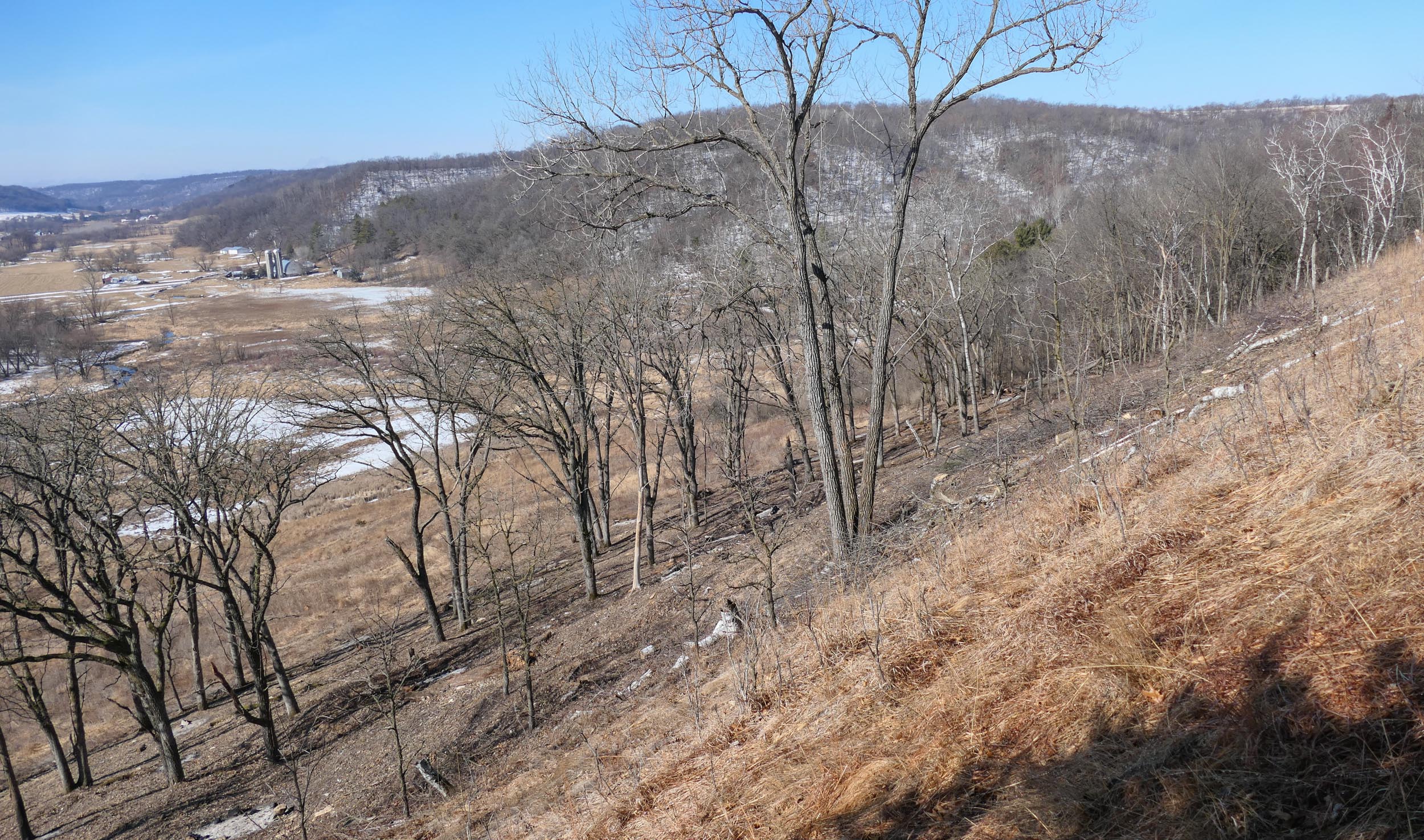 View down the valley from the bottom edge of the savanna 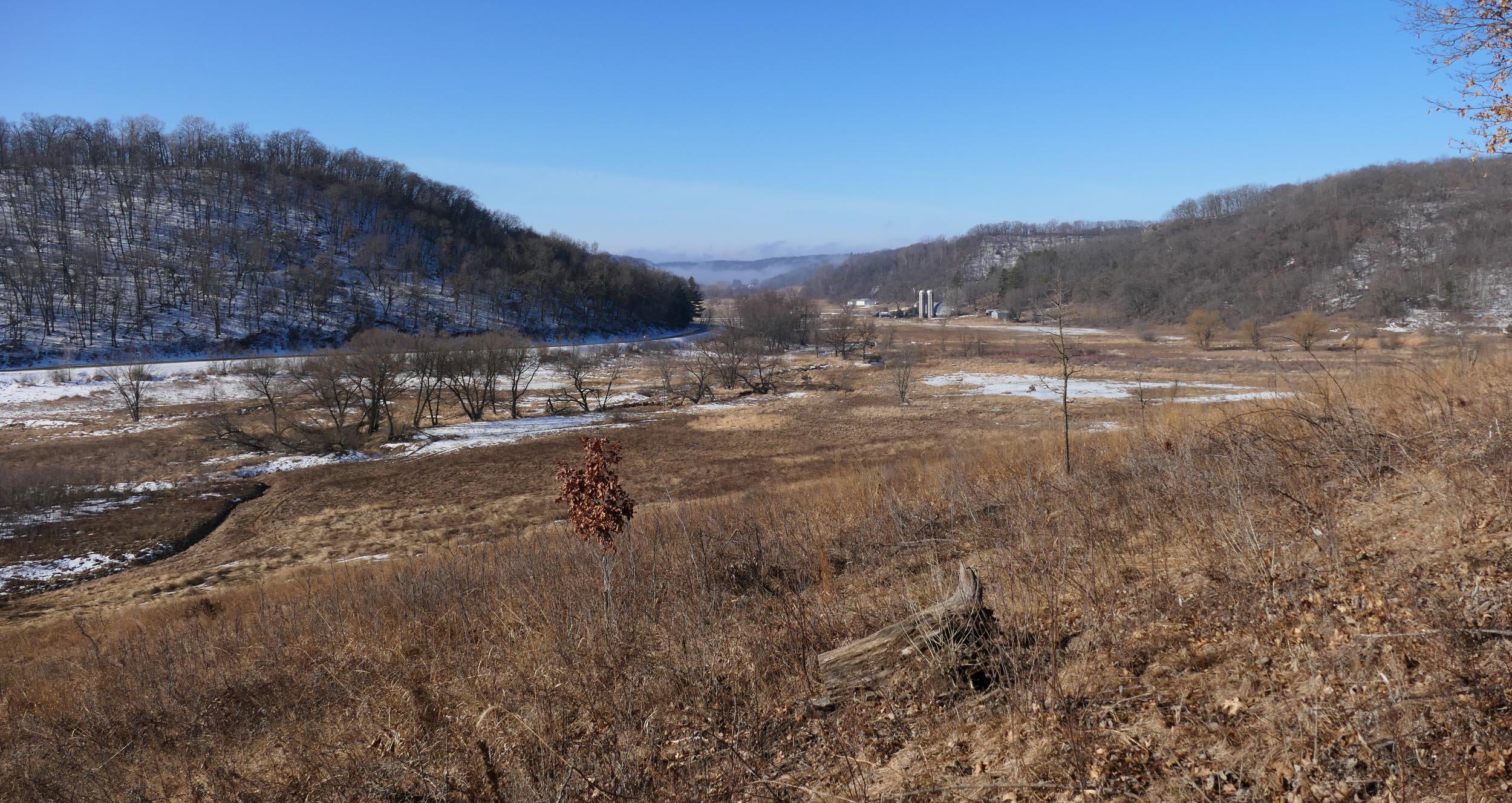 We’ve been seeing some large flocks of Wild Turkeys – these guys were strolling up our driveway.  (Photo taken through a screen and some misty rain.) 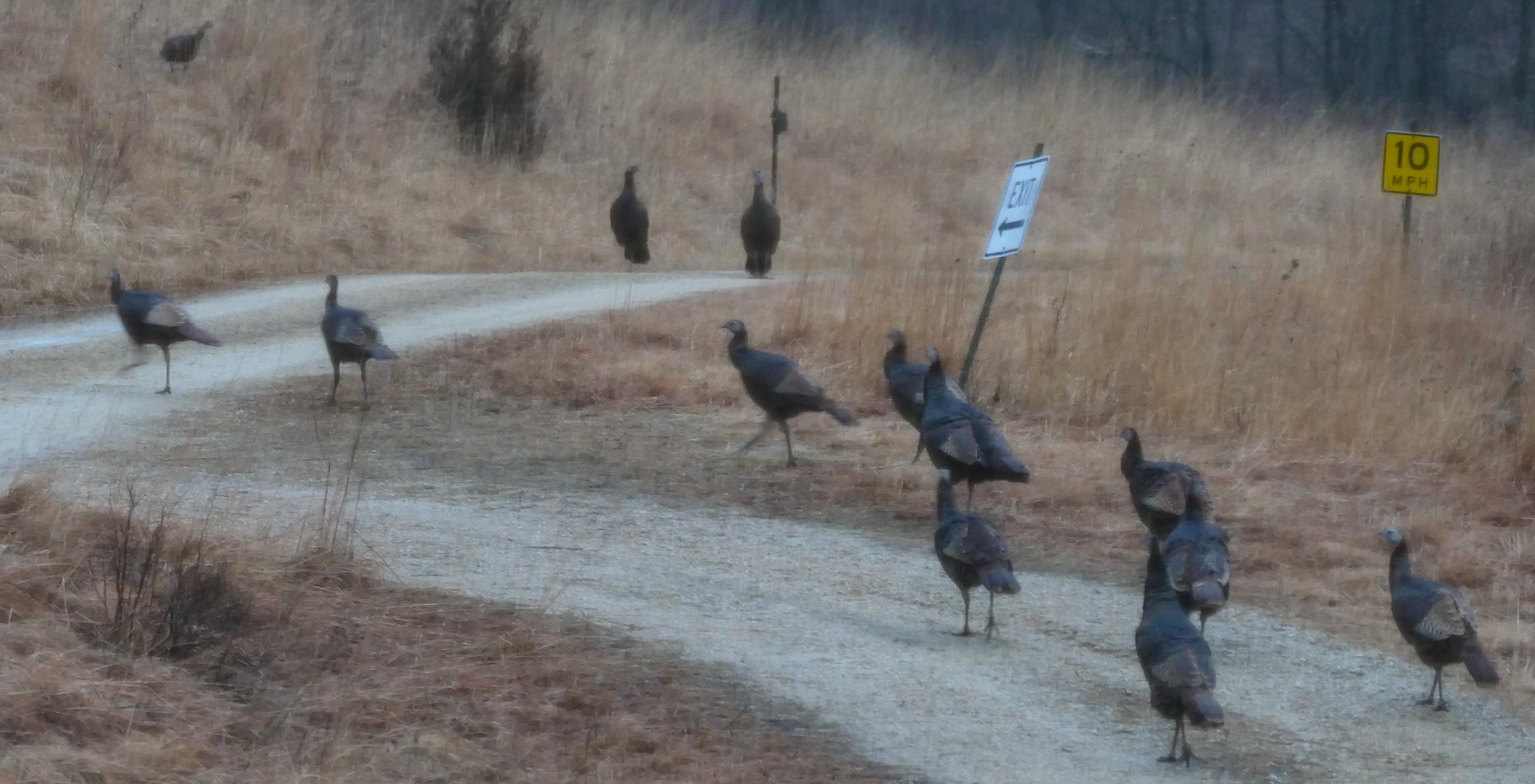 We’ve had a pheasant wandering in the wetland for the last few weeks.  We hear him more often than we see him – he has a loud croak that we can hear for at least 1/4 mile. 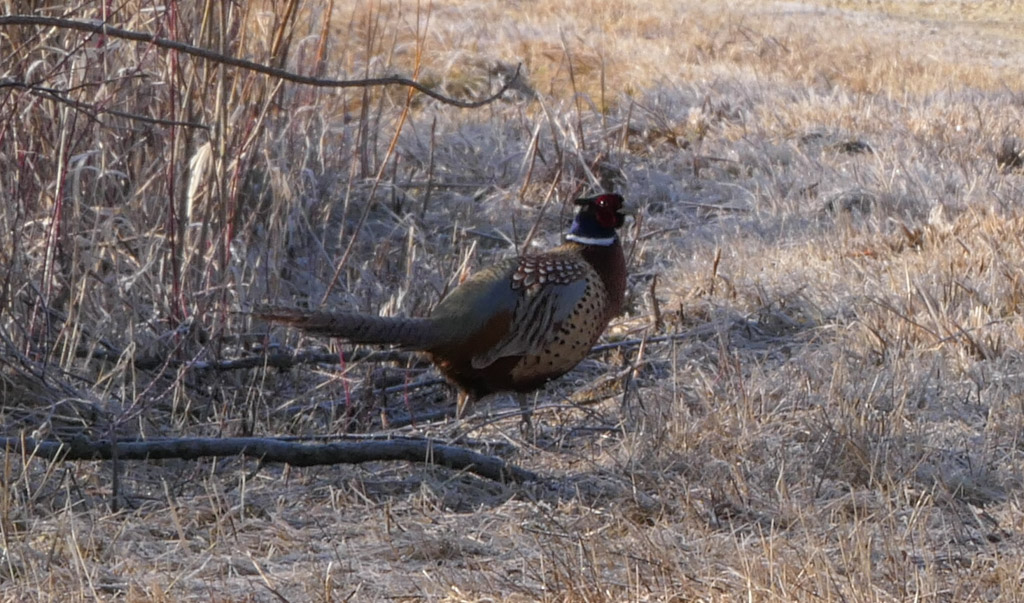 The early migrating birds all arrived in the last few weeks – Eastern Bluebirds, Red-winged Blackbirds and Sandhill Cranes came a few weeks ago.  We’ve seen flocks of Trumpeter Swans flying overhead, and watched one pair flying low up our valley.  They circled a few times over some of the beaver ponds in Willow Bend, but finally left and continued on up the valley.    Song Sparrows arrived a few days ago and are now filling the wetland and Center Valley with their songs.  American Woodcocks fly up from the edges of the woods when we walk through the savannas, and we’ve seen a few Turkey Vultures tipping by overhead.

Moths and butterflies are coming out on the warmest, sunniest days.  This is the first Infant Moth of the year – March 19th.  Its caterpillars eat birch leaves, spend the winter as pupae, and the adults emerge early in the spring.  It’s almost always the first moth species I see. 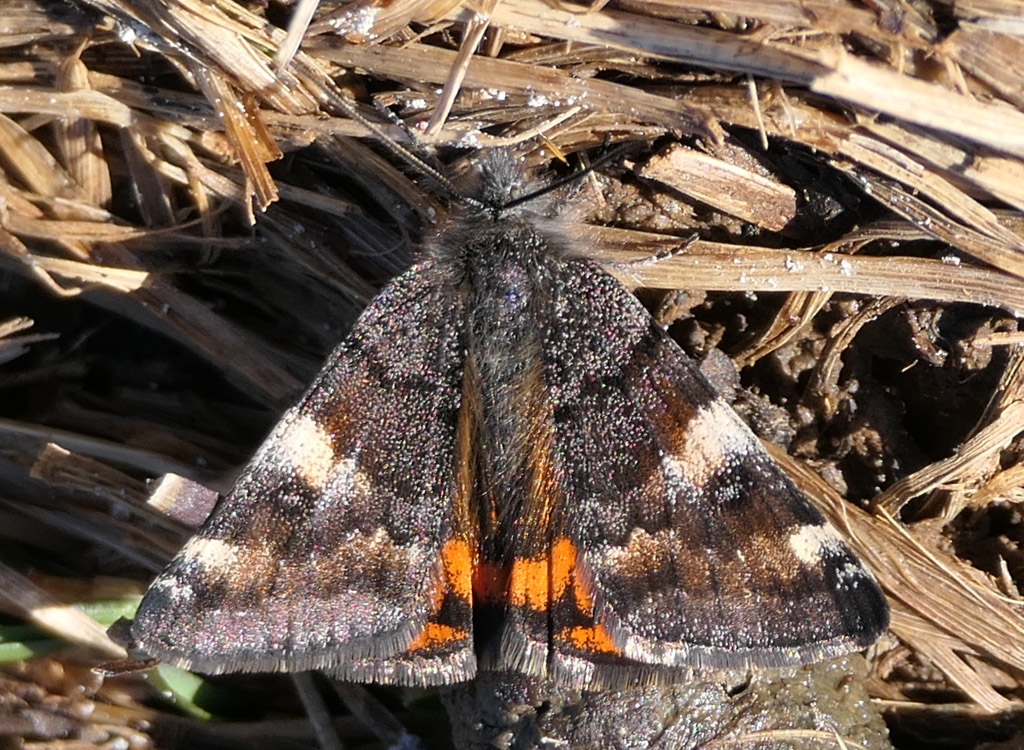 Eastern Comma – March 20th – first butterfly sighting of the year.  Commas spend the winter as adults hiding behind bark or in brush piles so they’re quick to come out once the temperatures warm.  (I saw a Mourning Cloak butterfly that day too, but didn’t get a photo.) 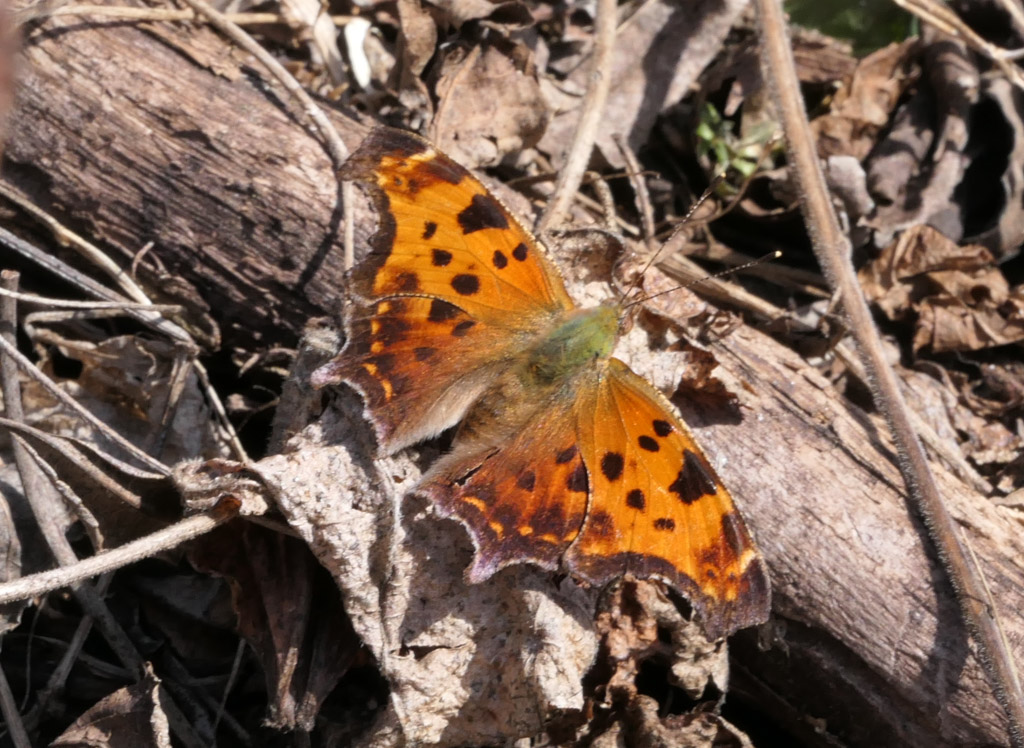 We’ve started seeing skunks on our trail cameras, but this is the first one we’ve seen in person.  The photo isn’t very good, but I didn’t want to get too close. 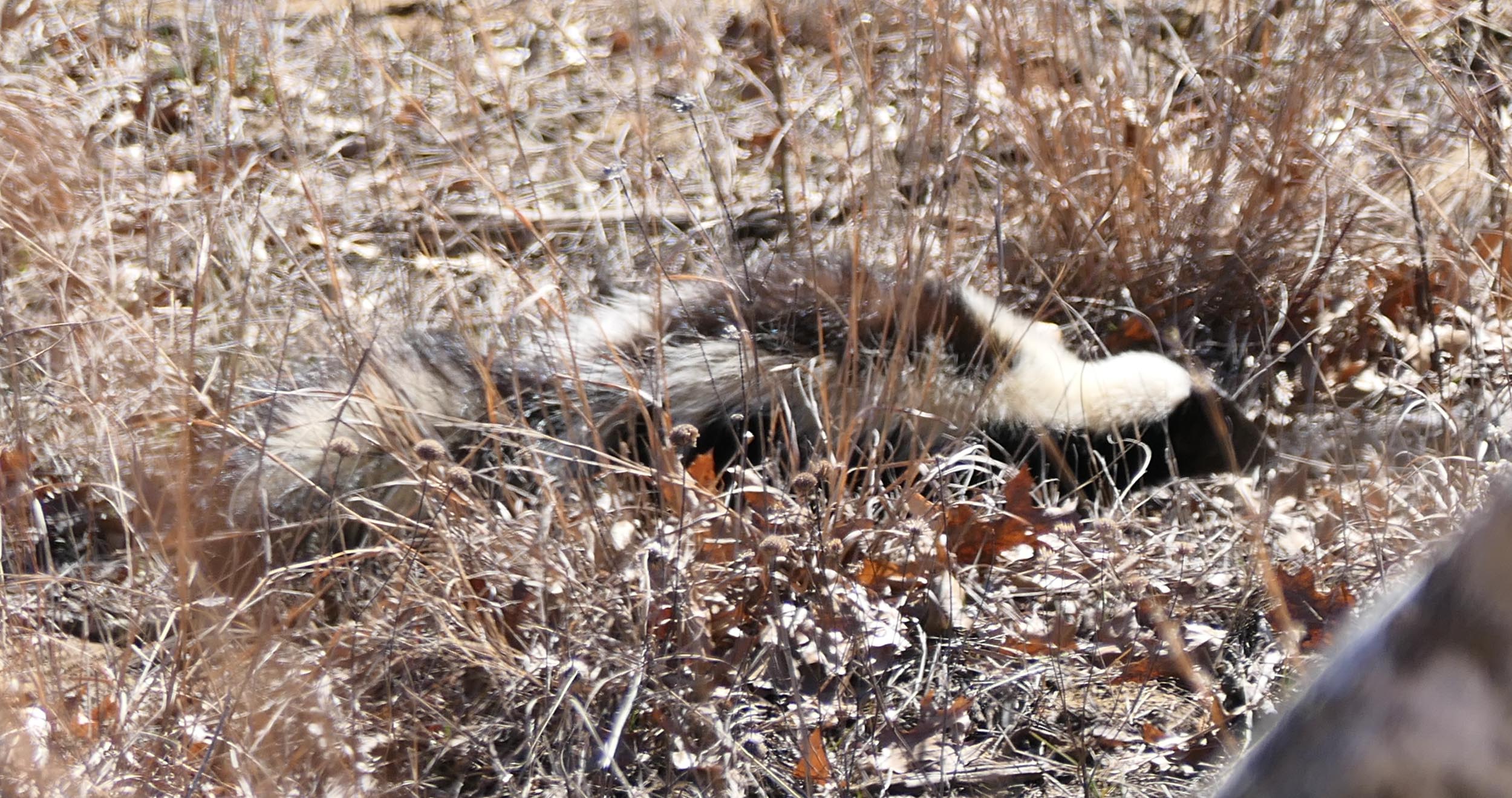 The end of our walk is through the Glen – our favorite bird-watching spot.   In mid-March the stream was still frozen and covered with snow.

Looking the other direction – behind the bench.  The stream is a tiny trickling one, but when it freezes it spreads out across the whole floor of the ravine. 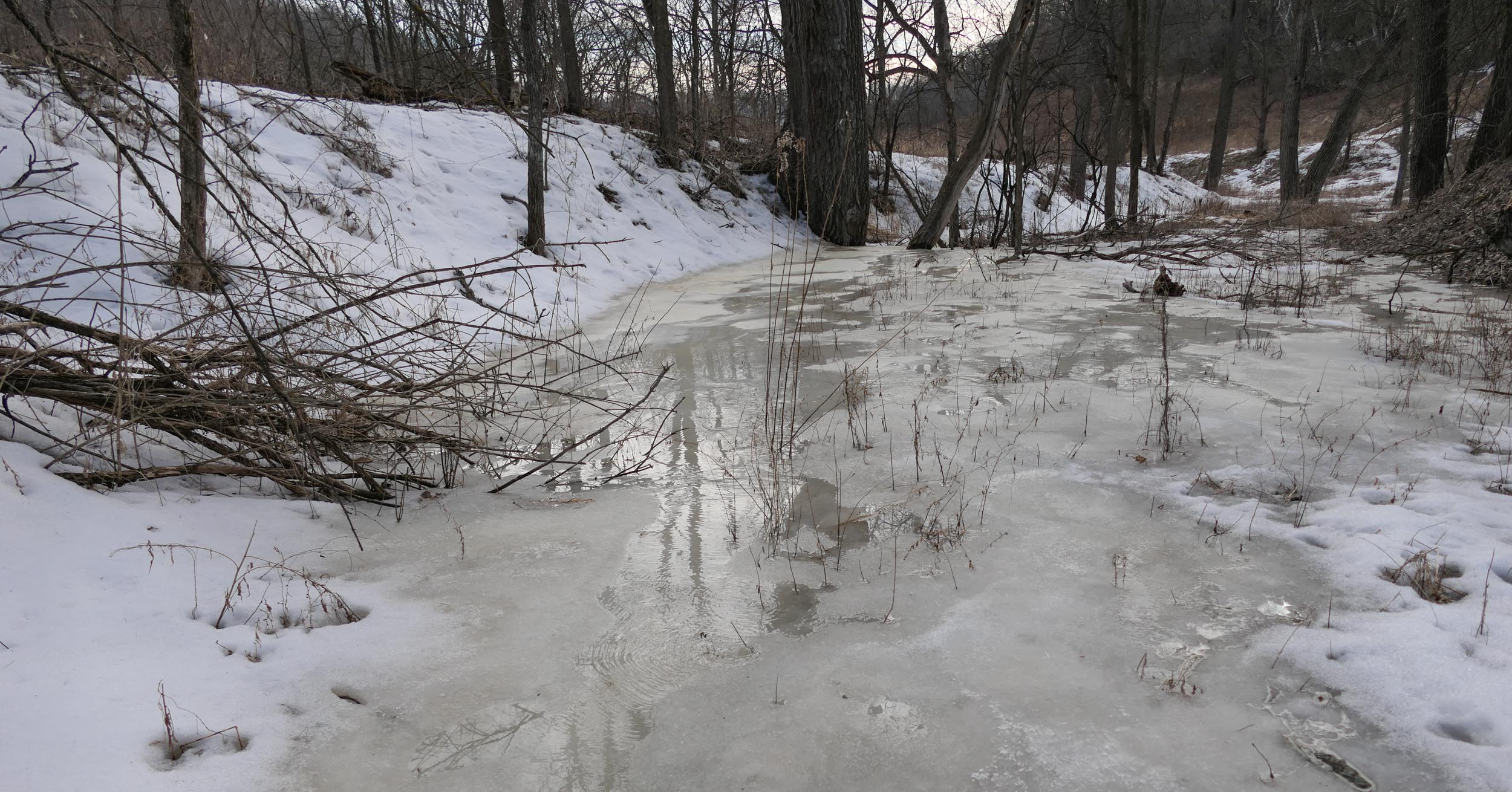 Every day we come it’s less snowy – this is from March 27. 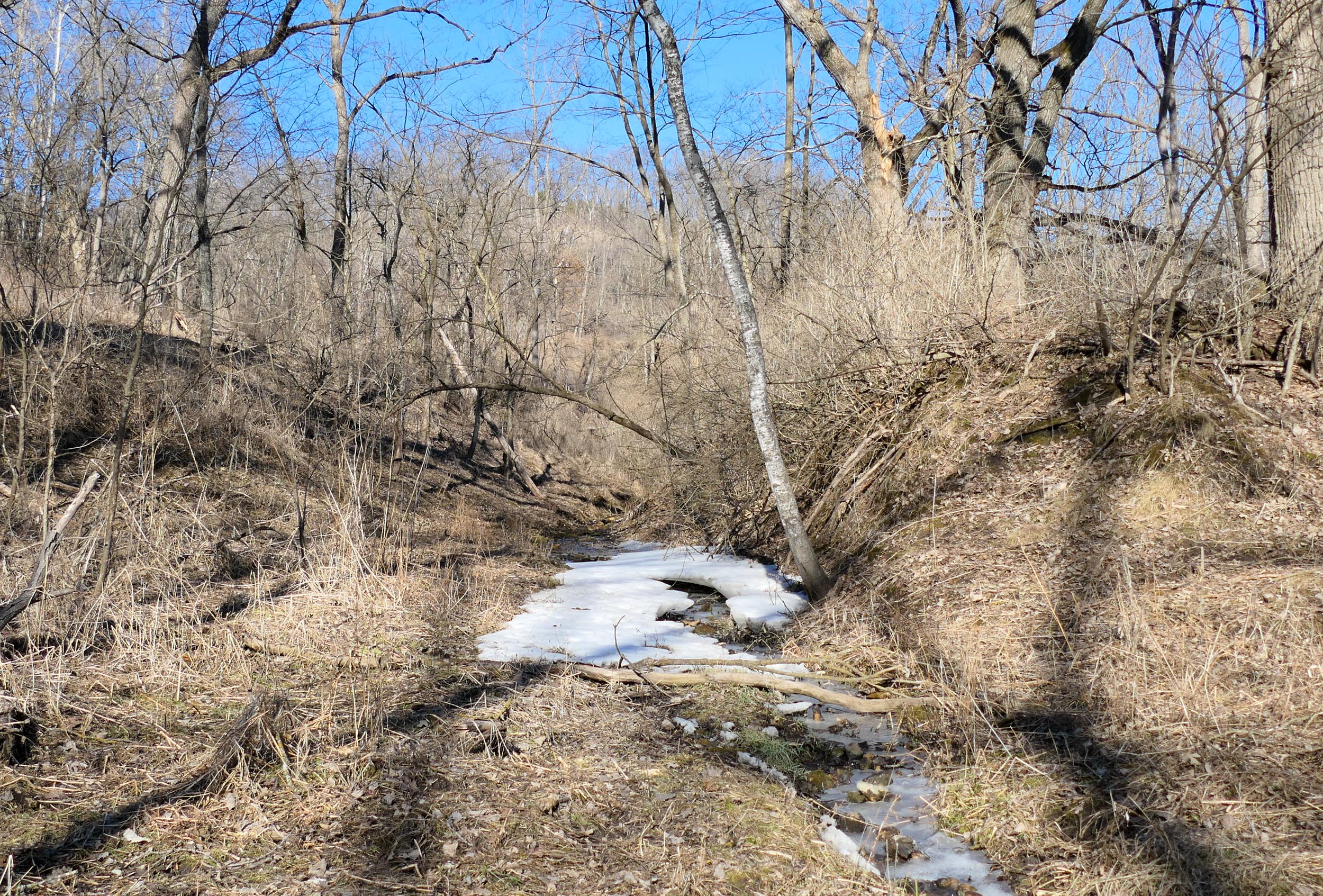 When we sit on our bird-watching bench in the Glen there’s a friendly Red Squirrel who nibbles on walnuts while she keeps an eye on us.  She’s almost always on one of the oaks that overlooks the bench. 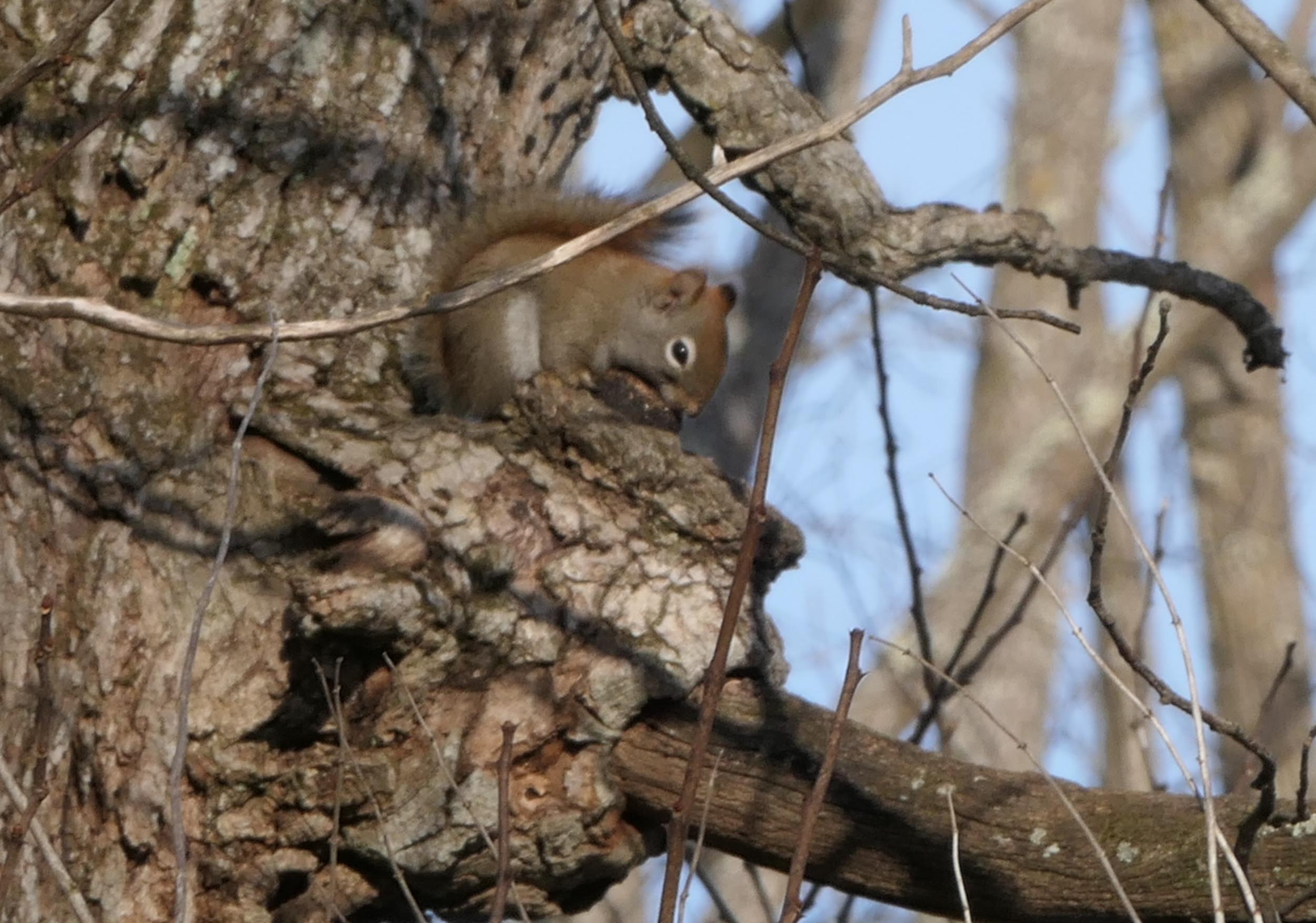 I’ve been doing a few projects on warm days, between snow storms.    For a few days I walked up to Sumac Prairie and cut some invading brush. 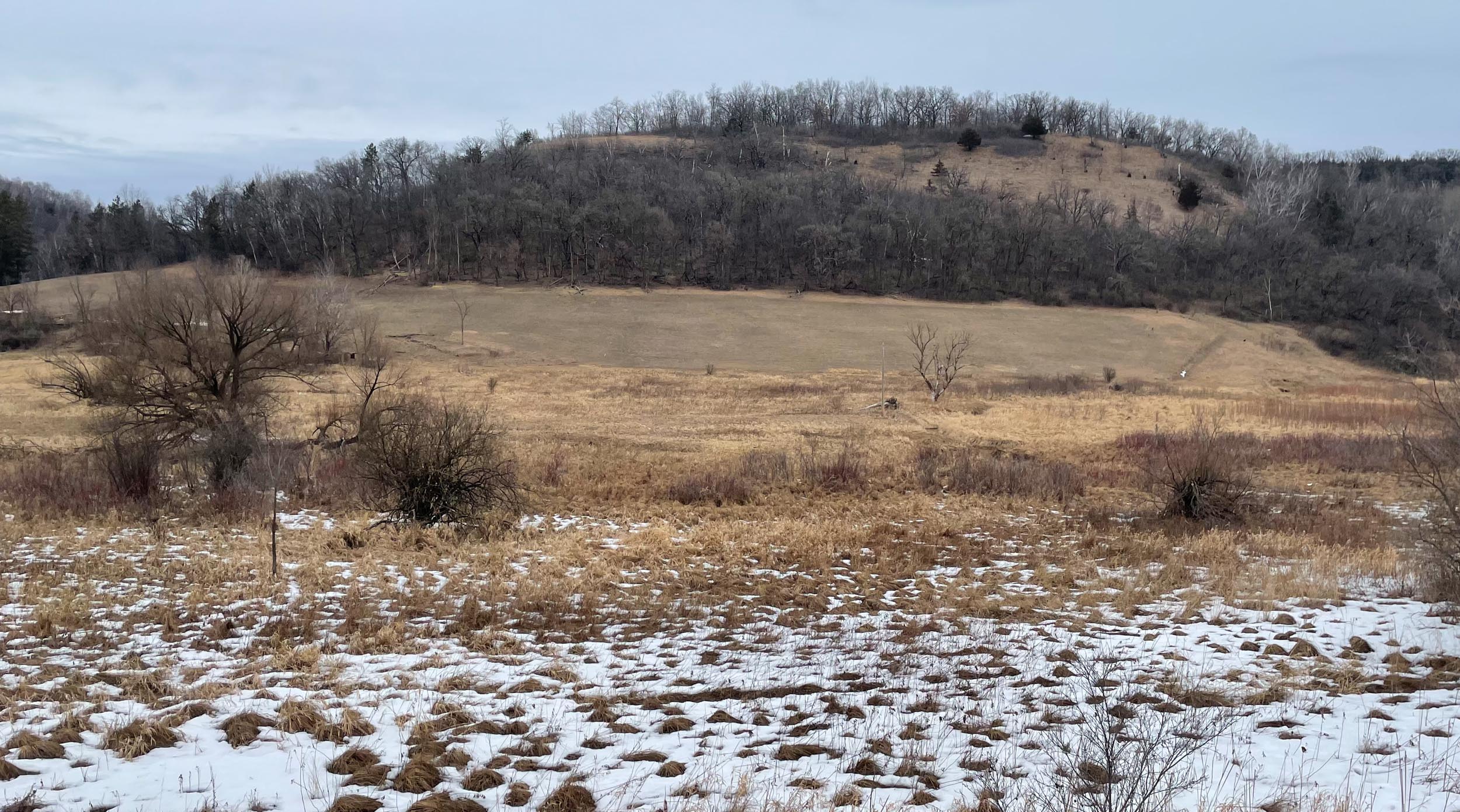 This is what Sumac Prairie looks like close up.  Very brown right now, but the flowers will be coming soon.  This is always the place where I find the earliest flowers – they like the hot sun on the steep south-facing slope. 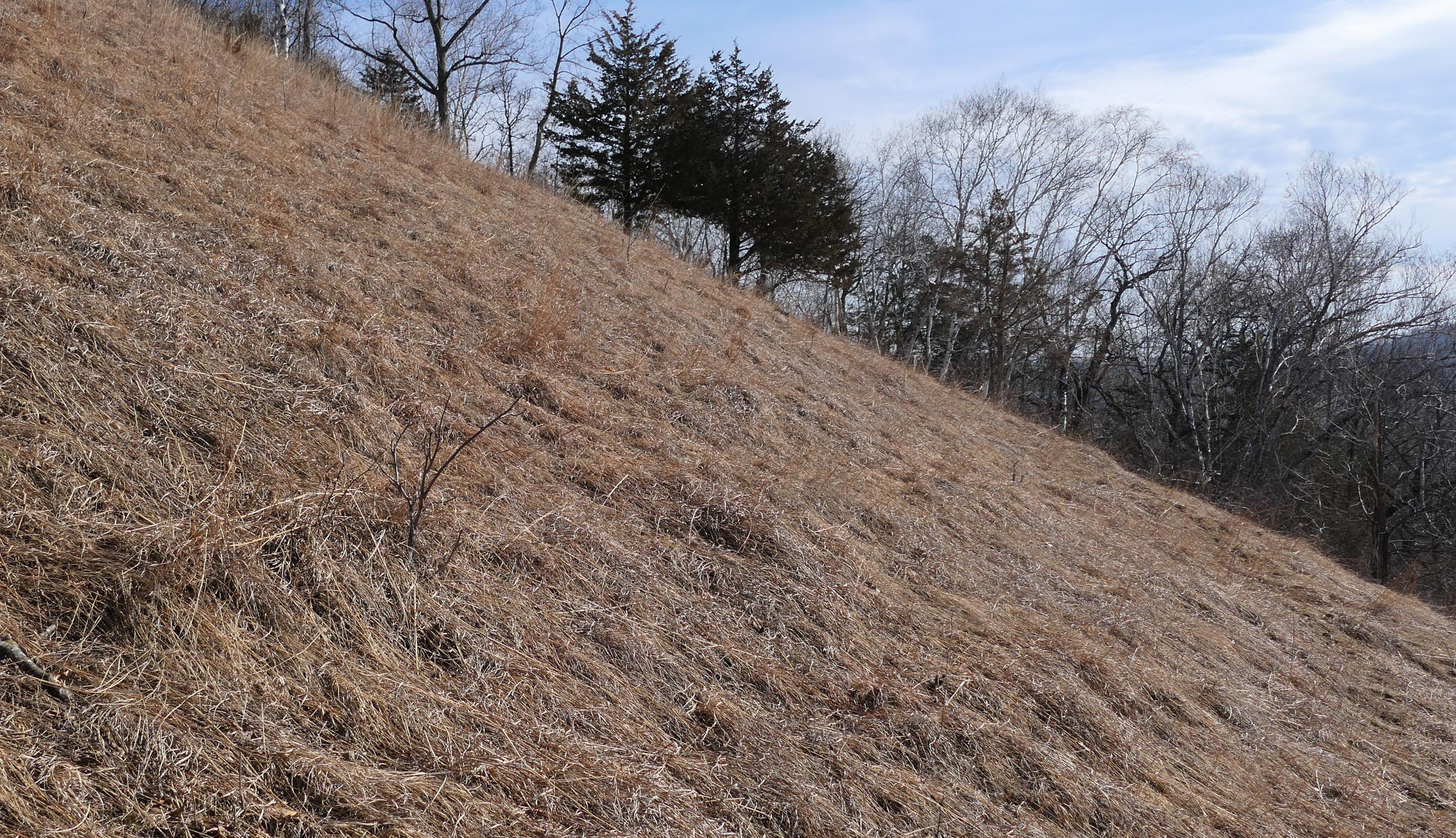 These are some of the earliest leaves I see poking up into the spring sun.  It’s a dry prairie species called Wormwood, and grows on our steep, sandy, south-facing points. 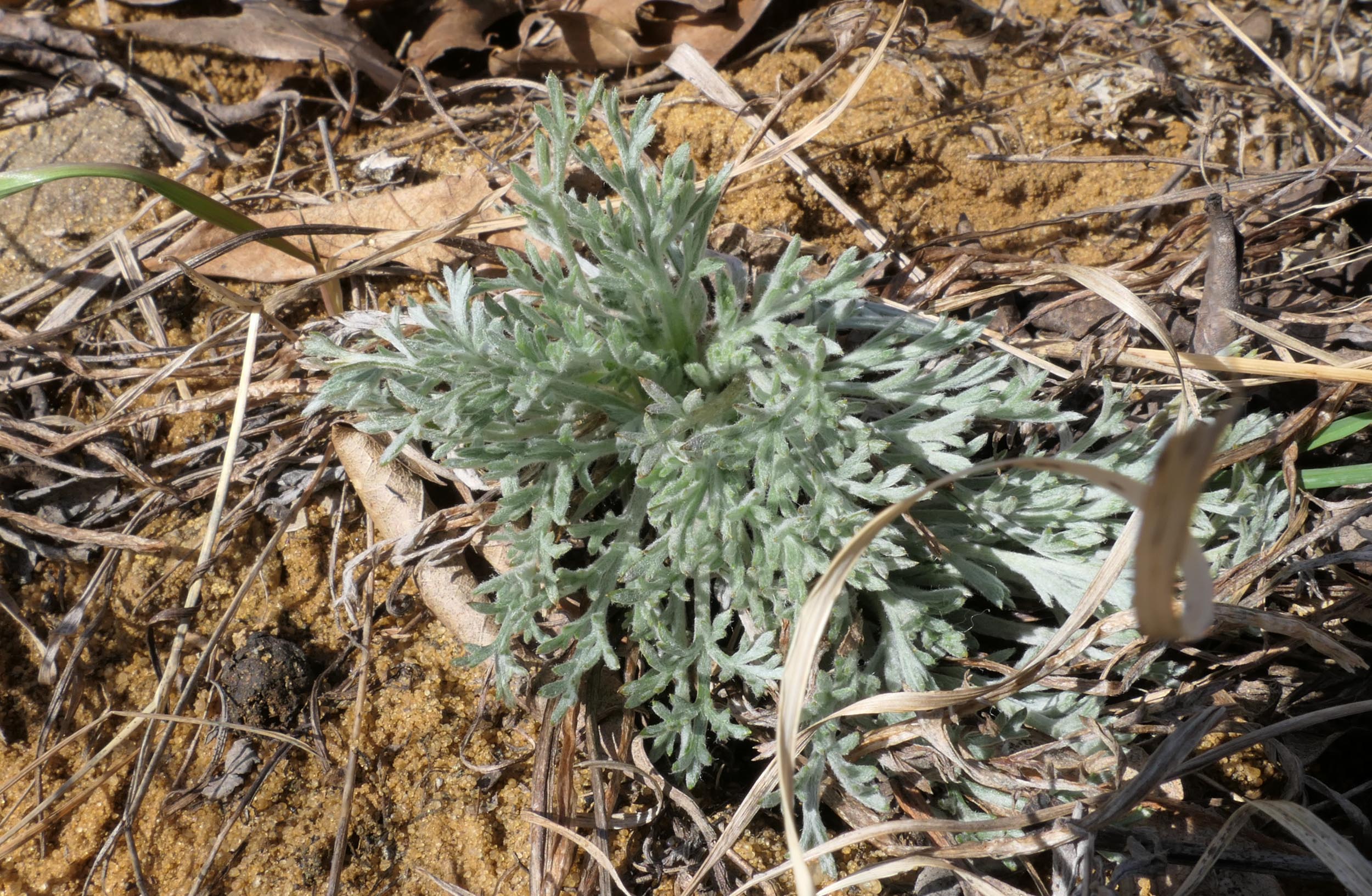 Mike and I are clearing some of the small trees on Indian Grass Point – above the house.  It’s the hillside that we see from our windows, so it’s been fun to watch the changes as it becomes a more open savanna, and we can see the prairie point above it more easily.  This is a view of the whole hillside taken last fall. 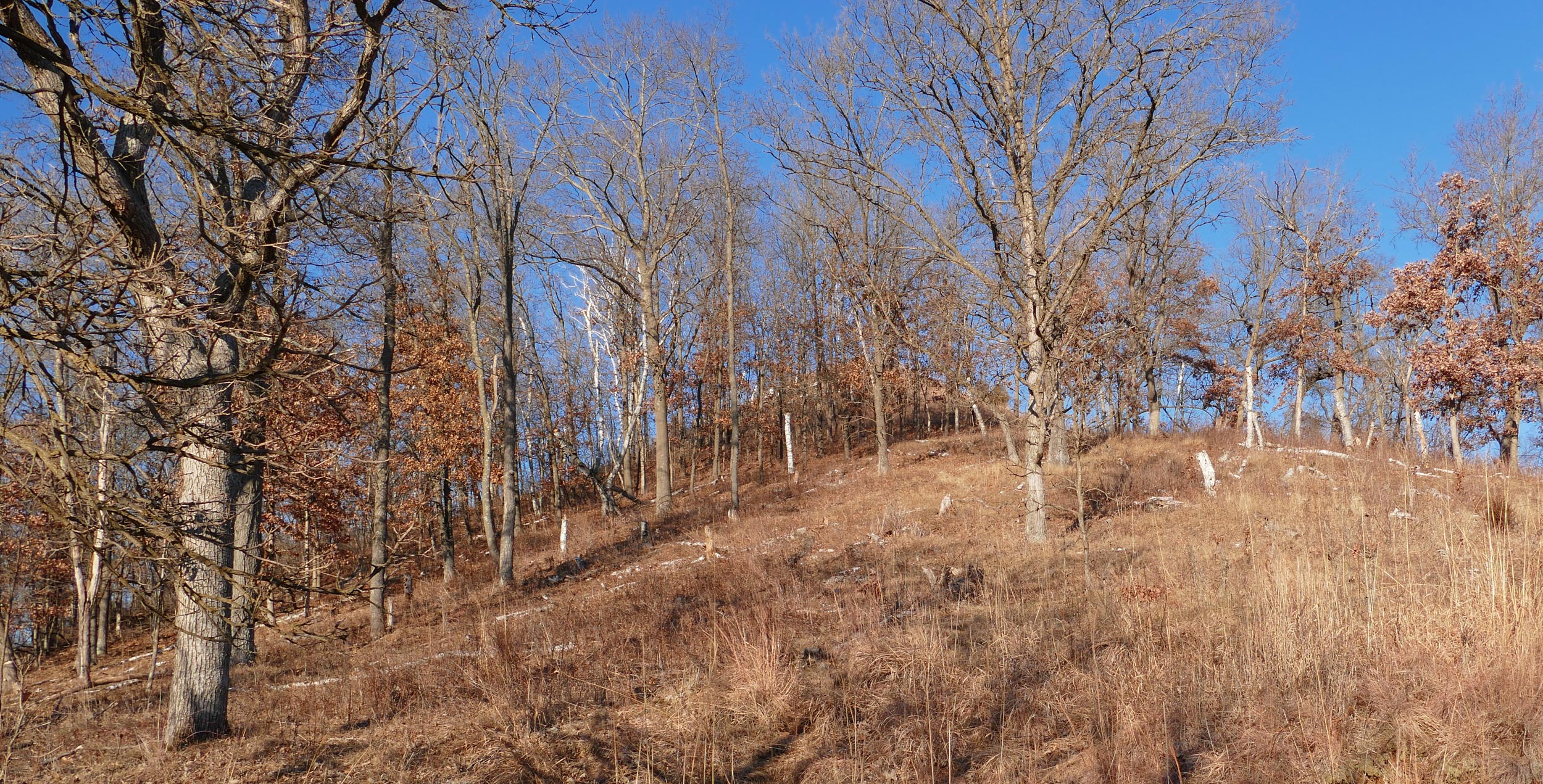 Now we’re working on the dense grove of trees at the top.  This week we cut most of the smaller trees.  Next to go are some – not all – of the medium sized trees.  We’ll leave the larger White and Burr Oaks. 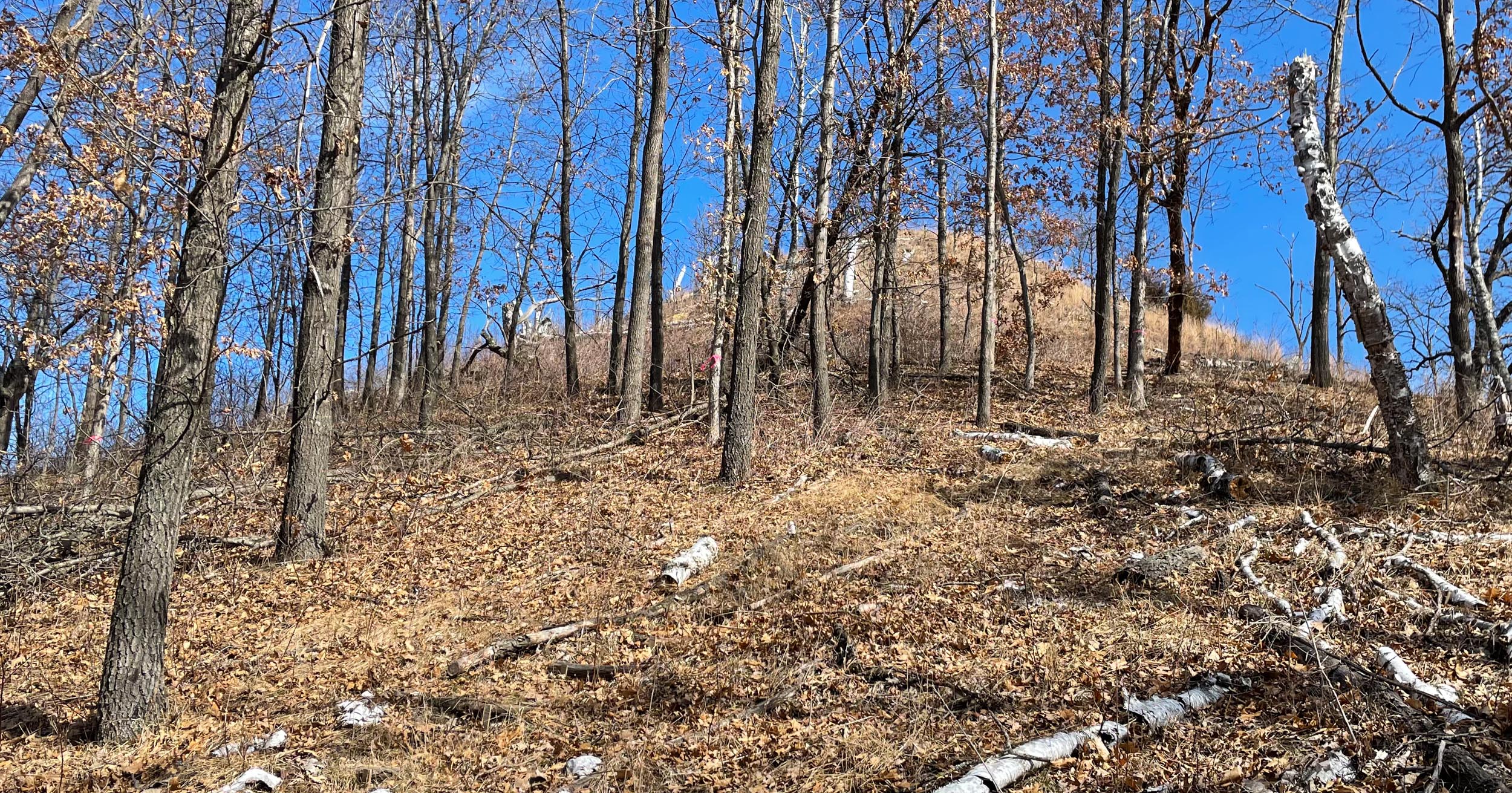 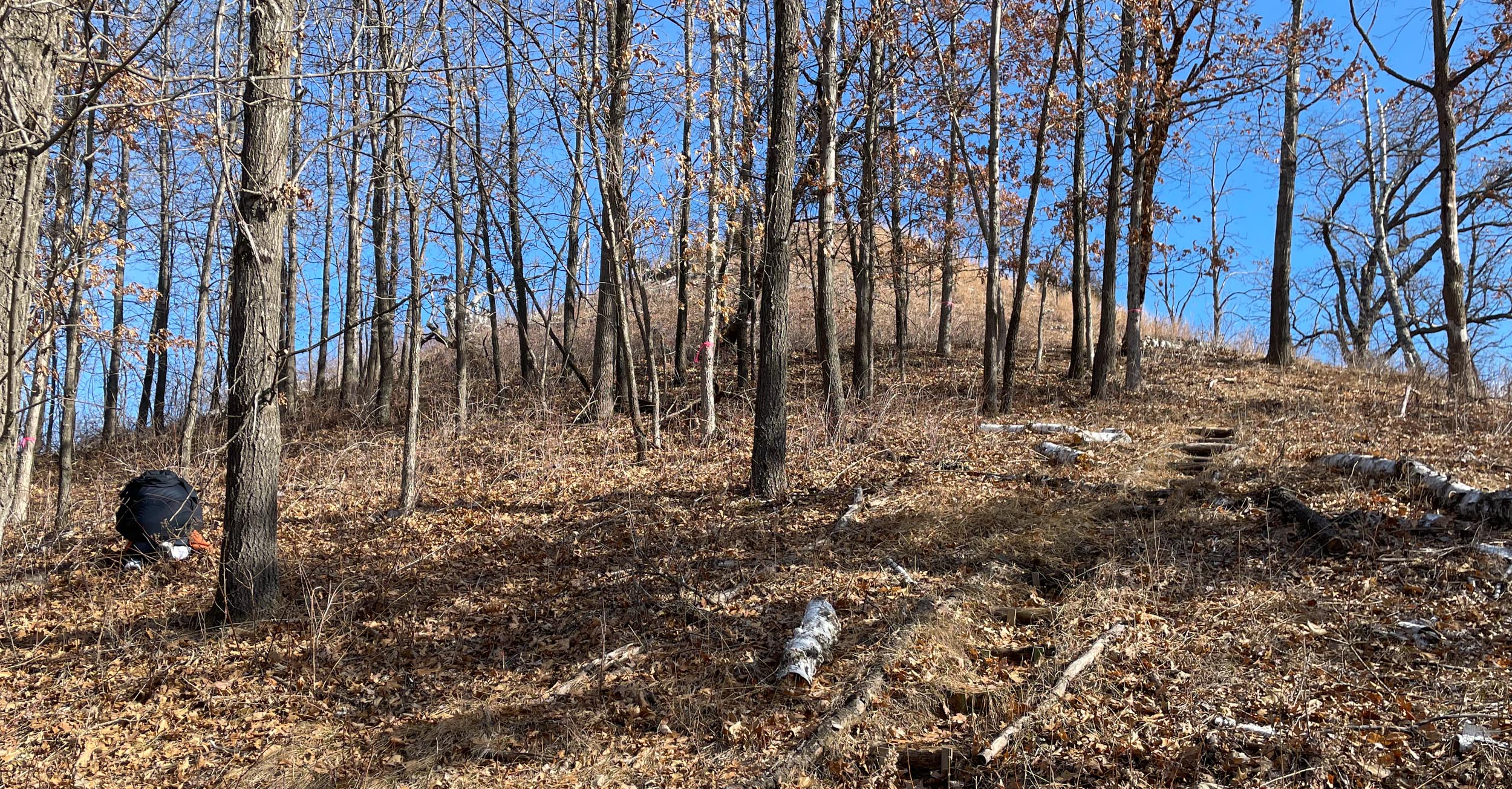 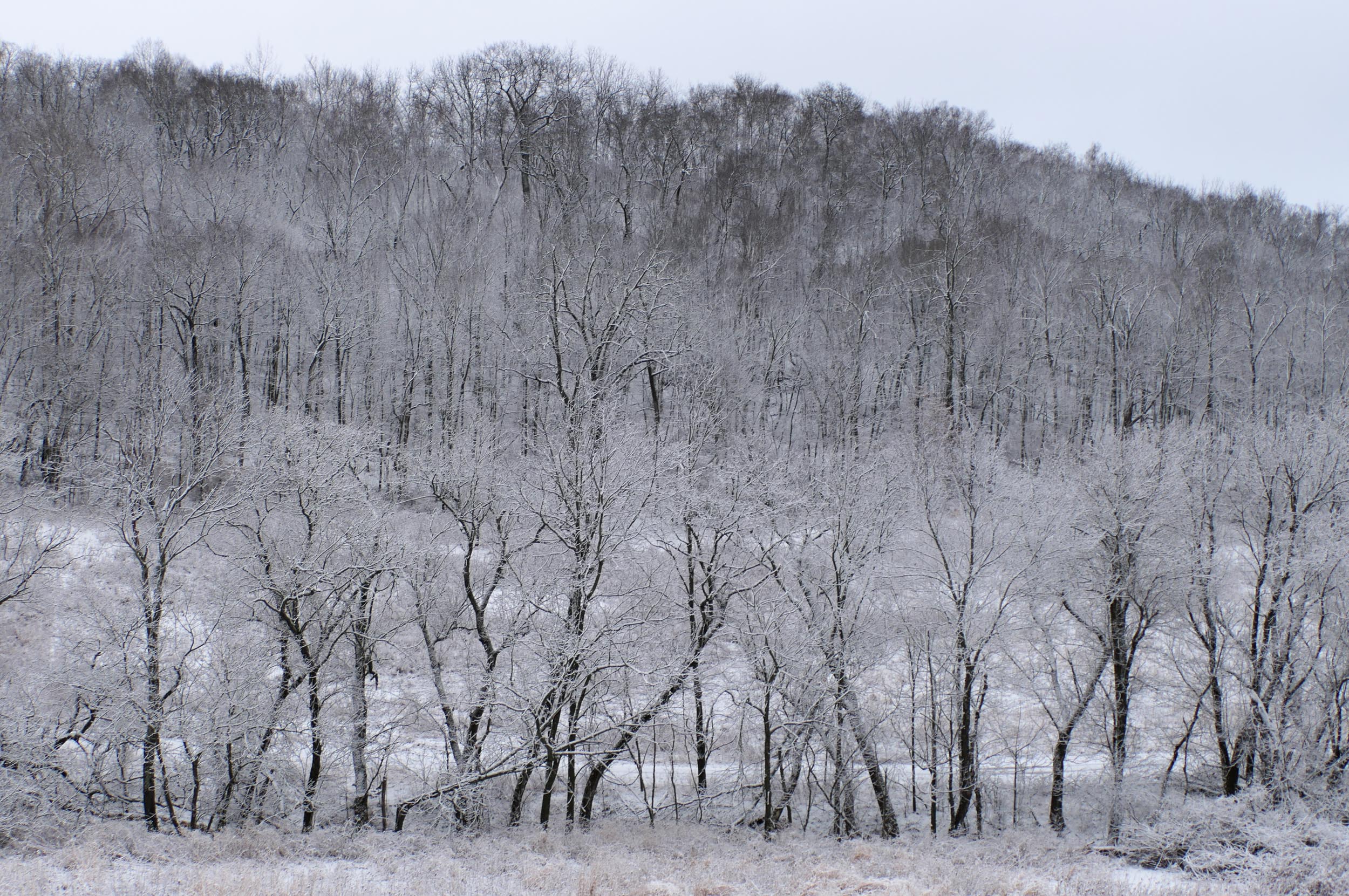 and on the hill above the house. 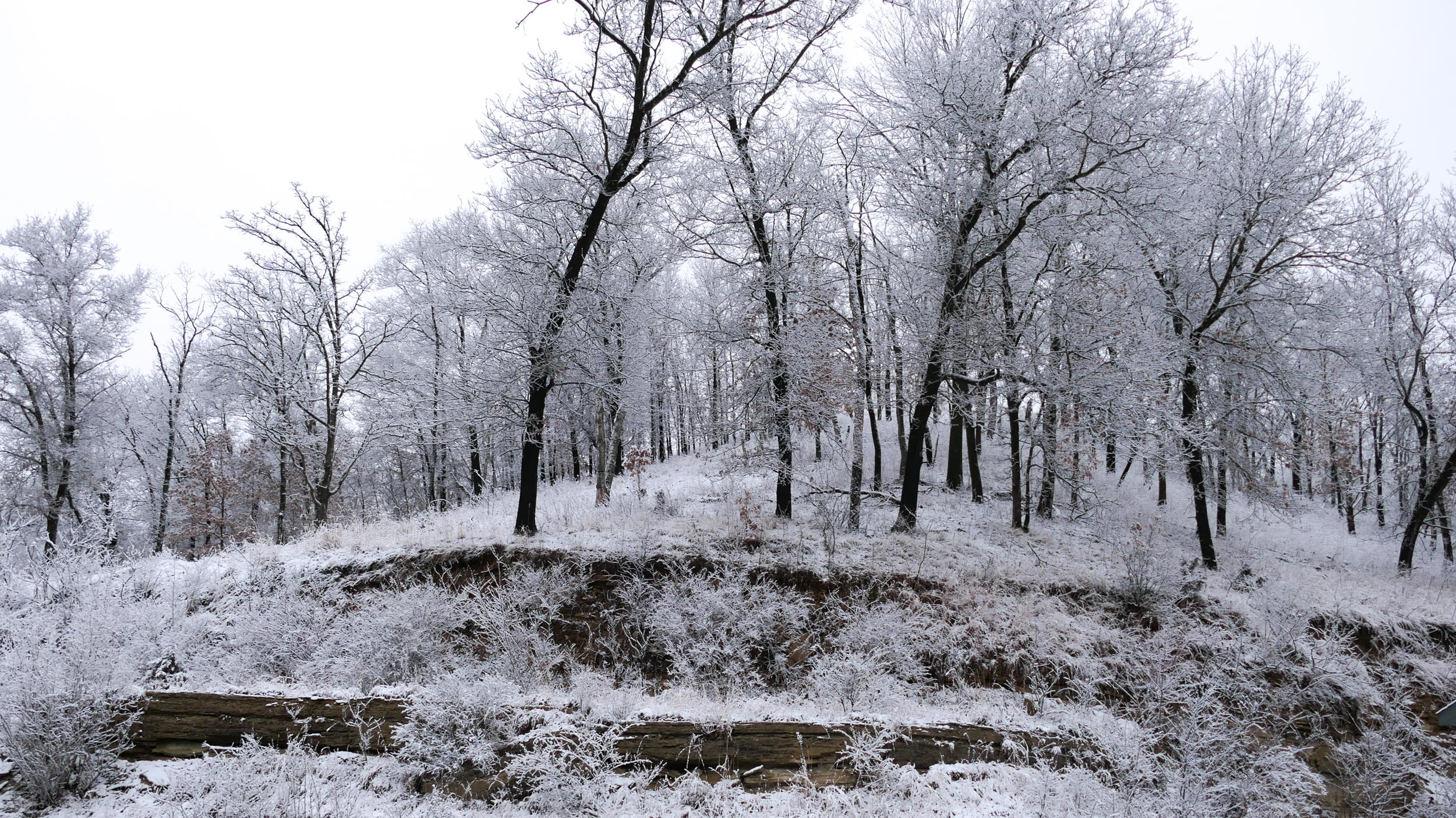 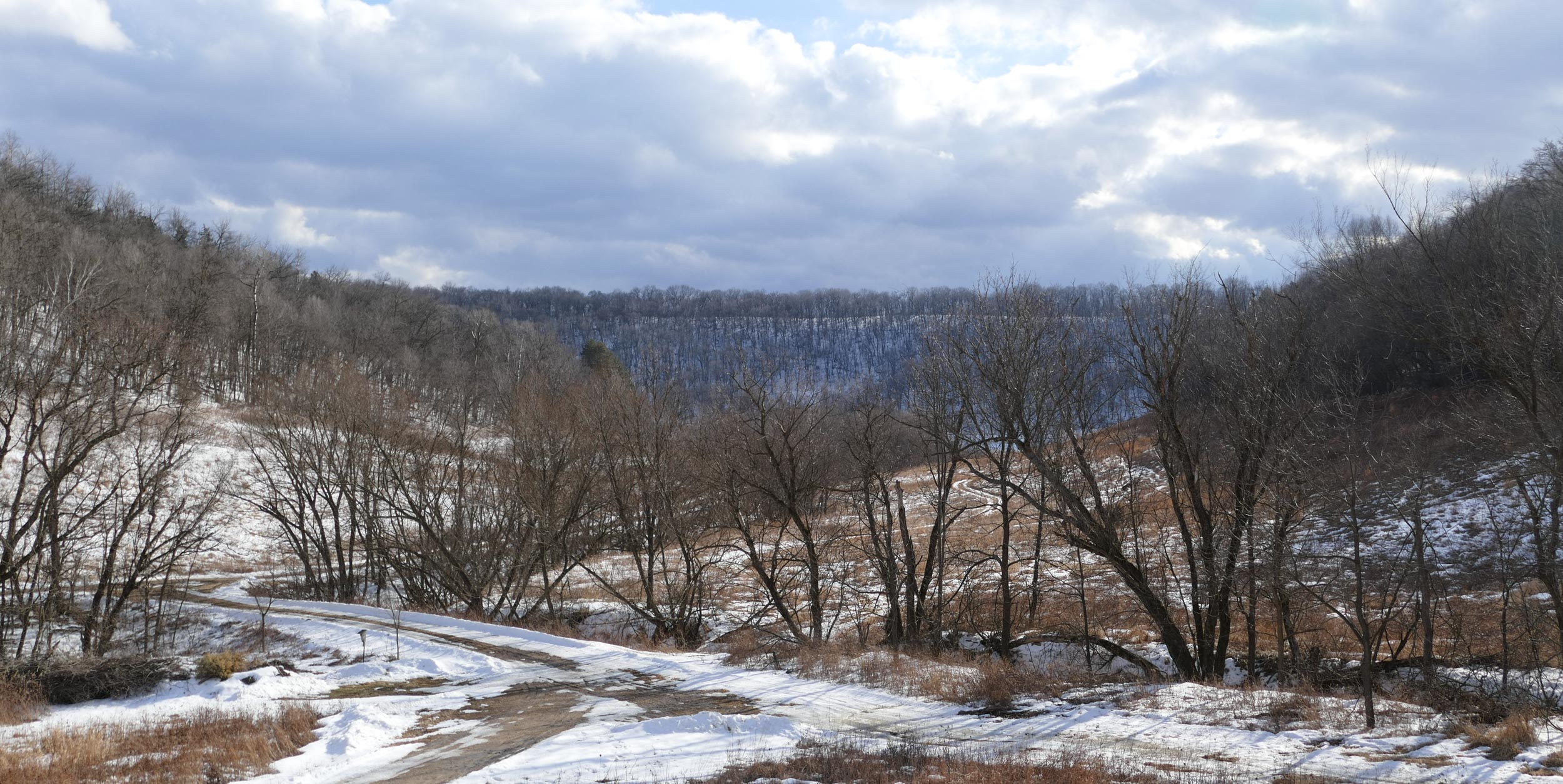 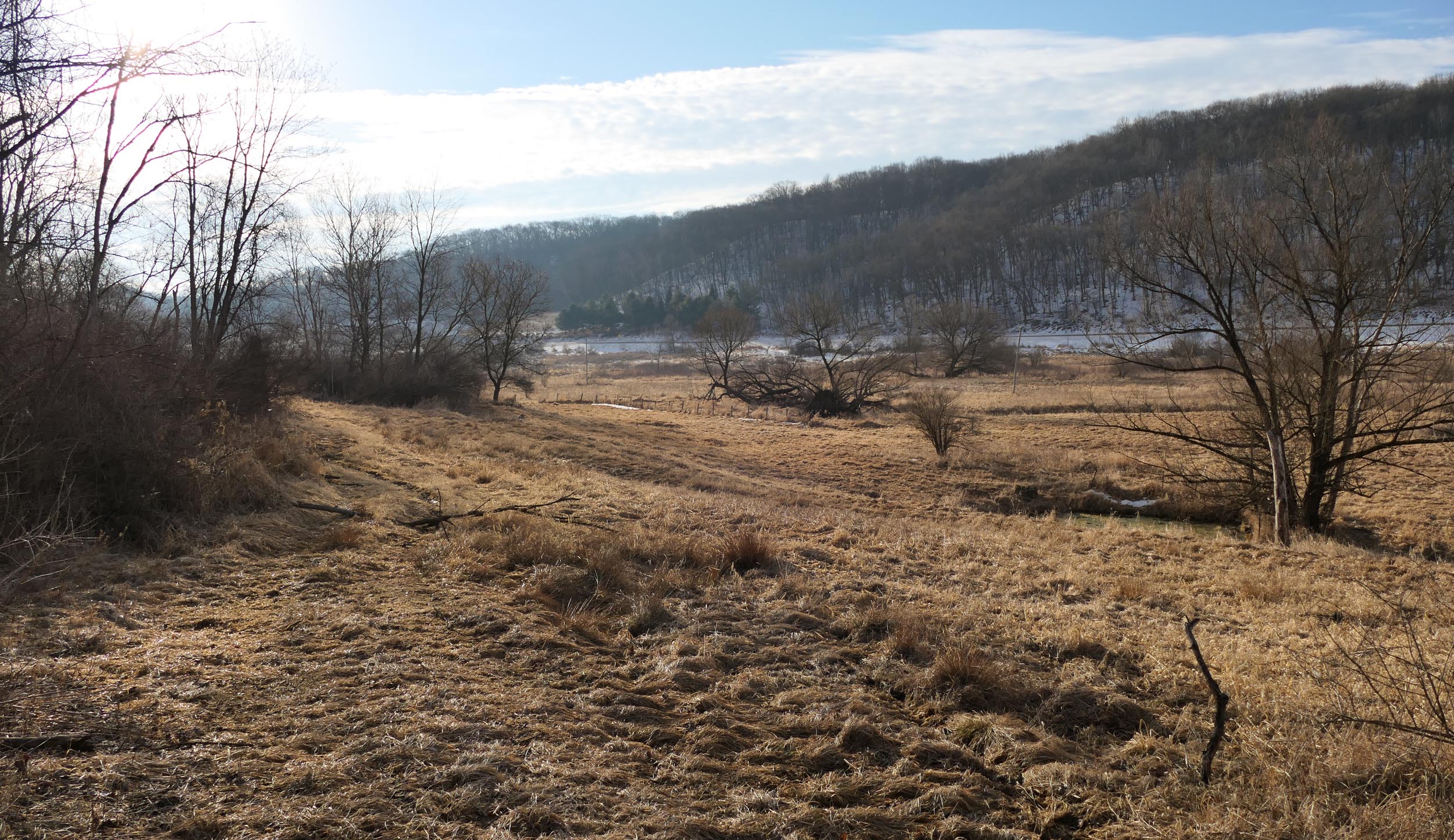 The Frog Pond – the first time it’s had water in it for more than a year. 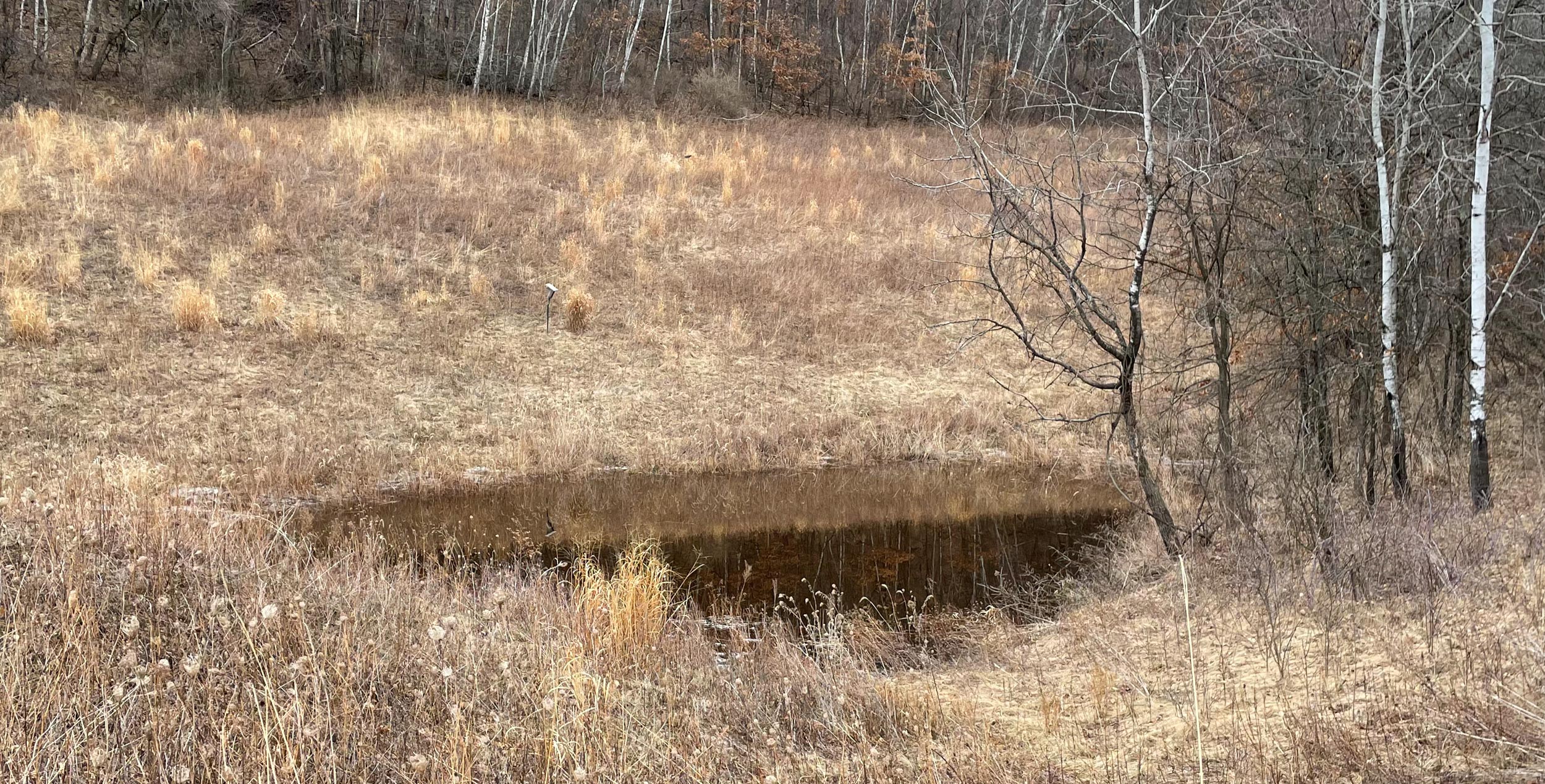 Ice on the Frog Pond 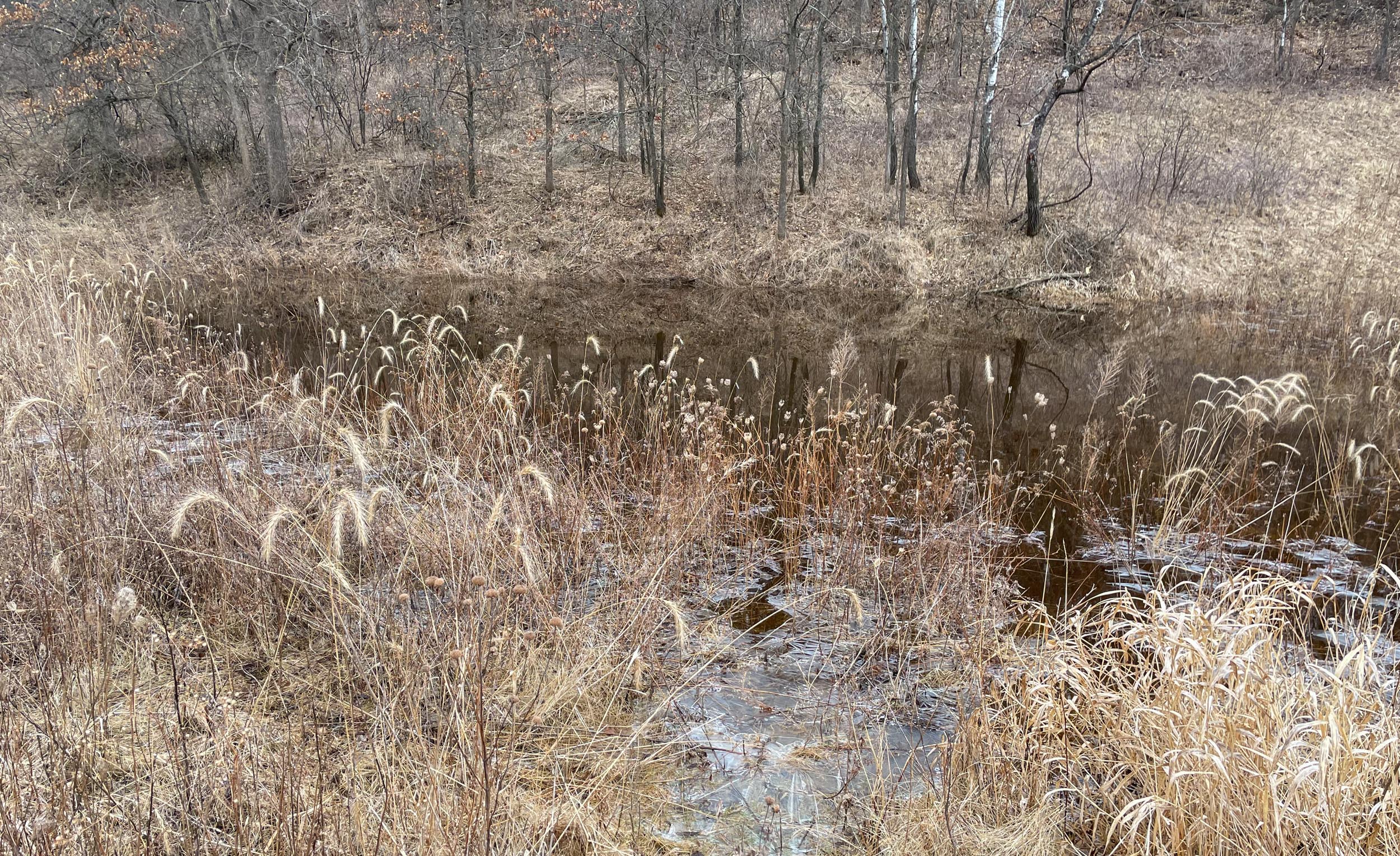 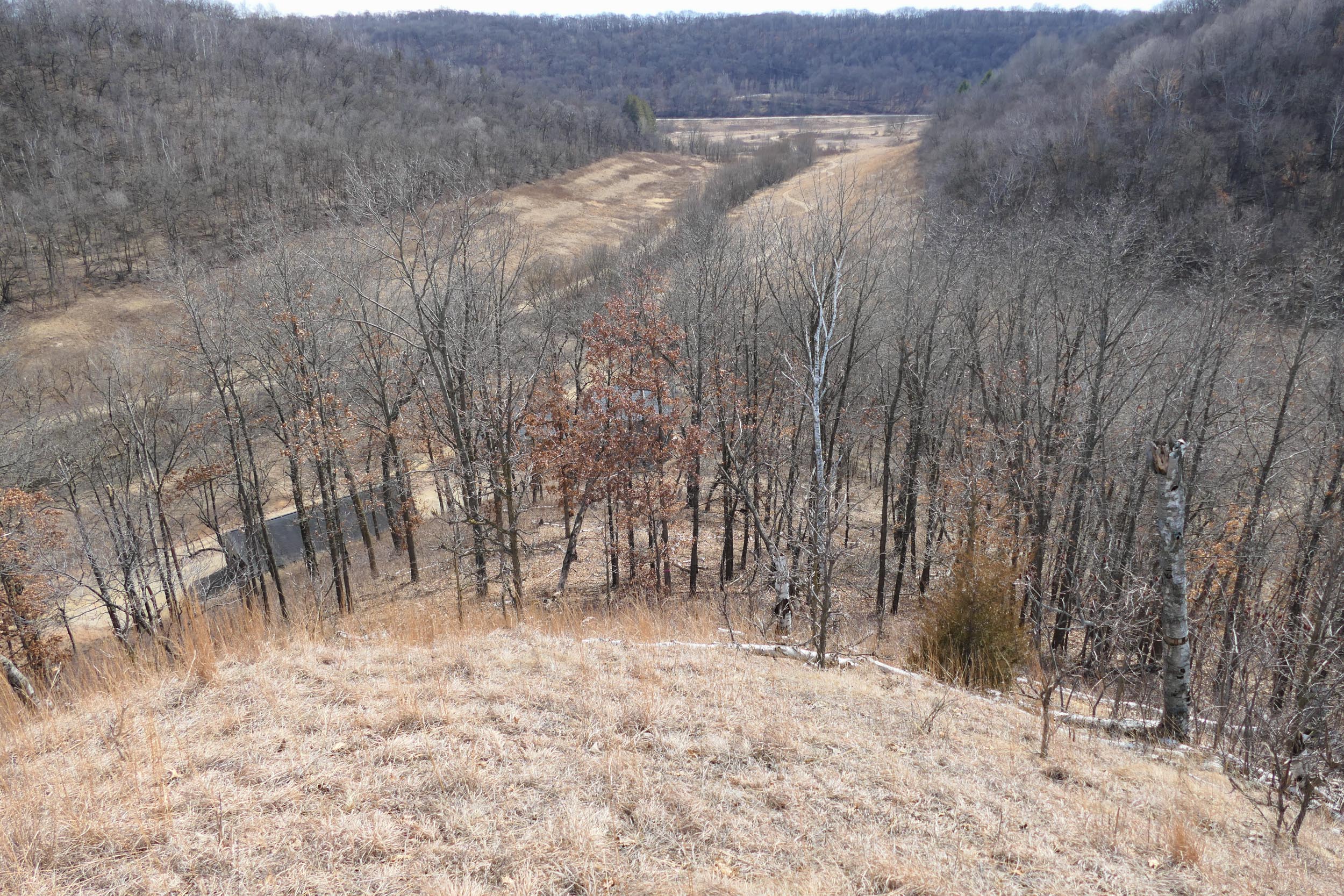