We’ve had little bits of snow in the last few weeks, but it has all melted quickly.  Mostly we’ve had sun and wind with brown fields and dark trees.

Coating of snow in late October

Snow on the hilltops 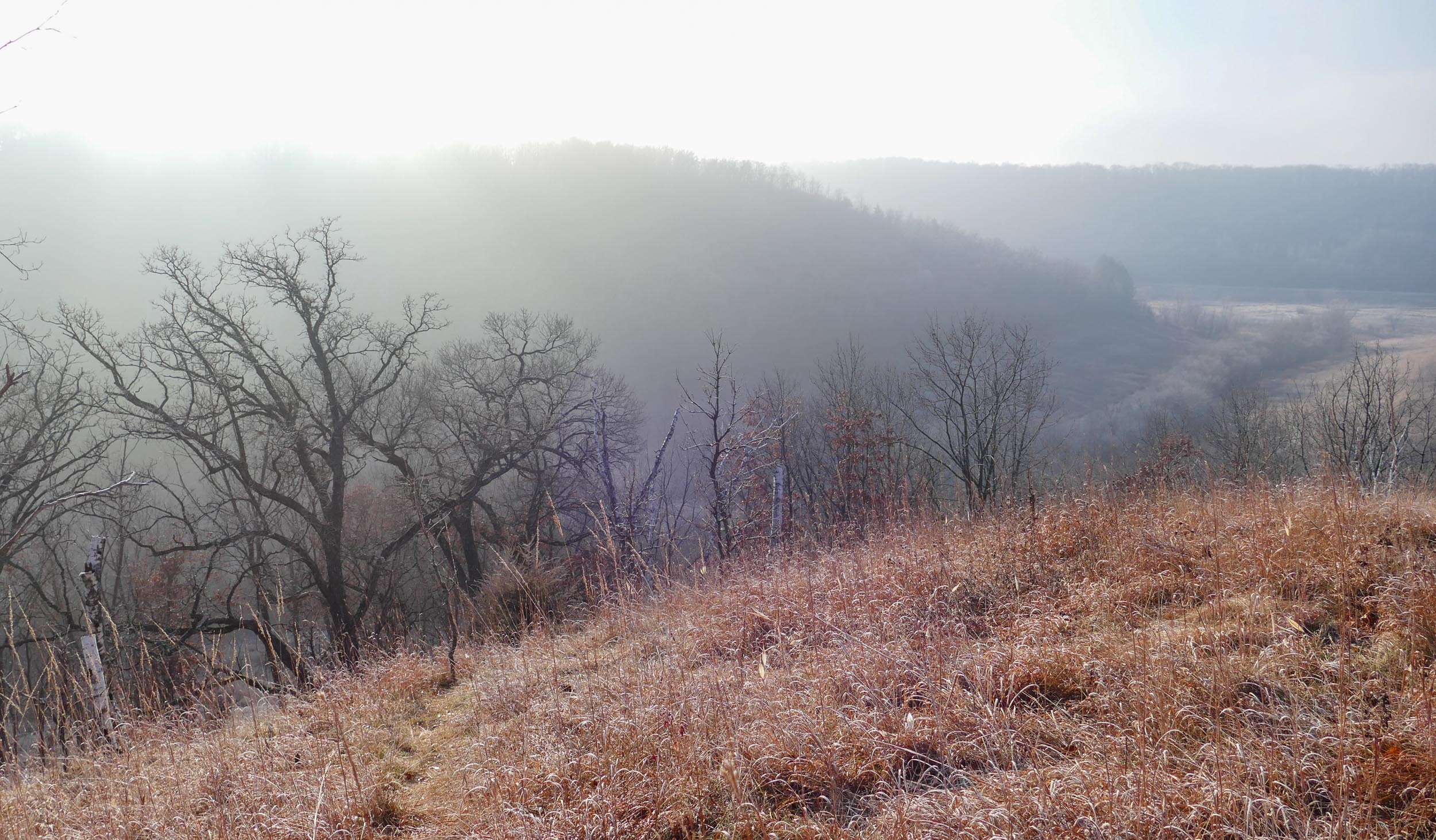 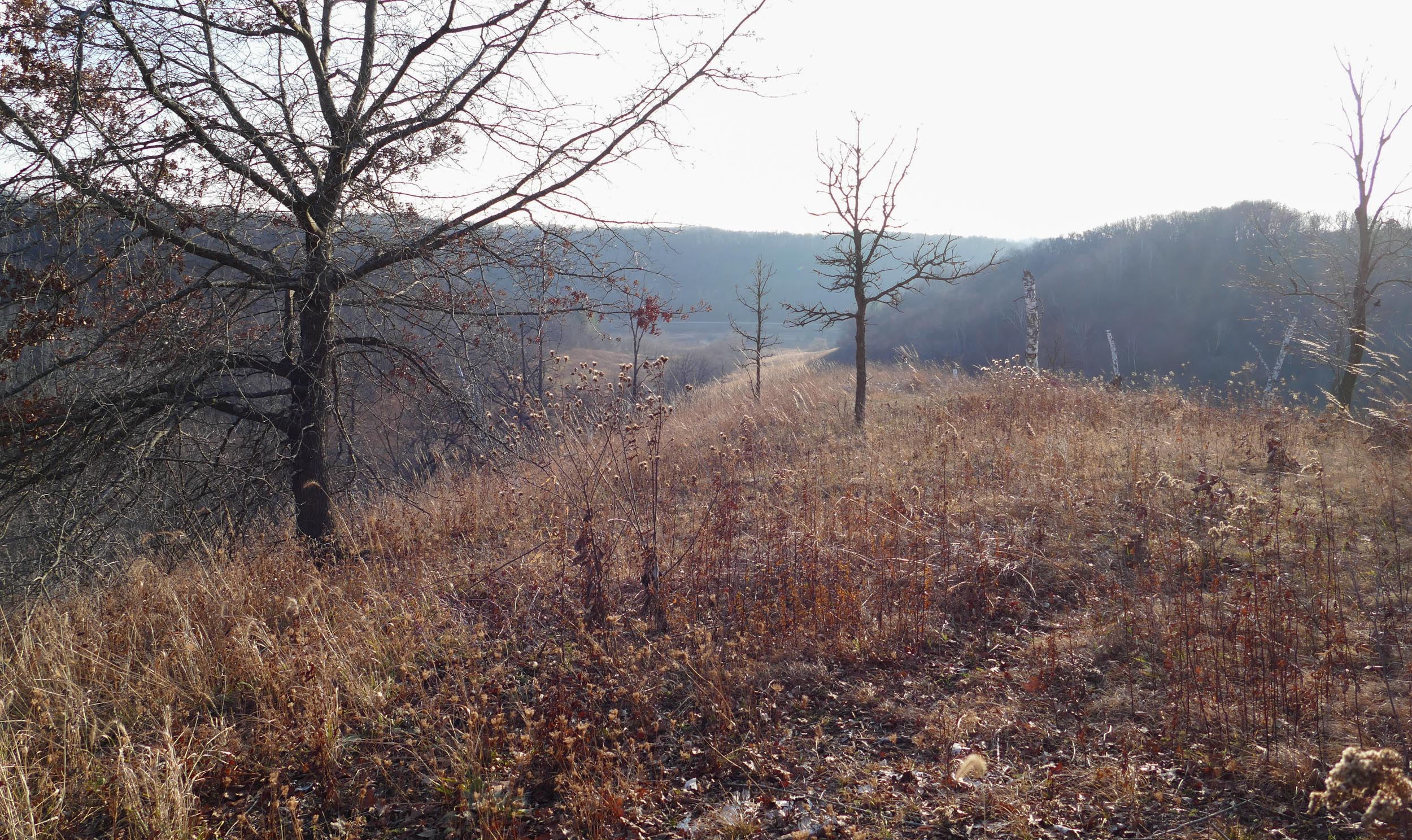 We’ve been taking advantage of the good weather to work on more fall projects.  We (mostly Mike) figured out how to use before-and-after photos with a slider to show the changes we’ve made.

This is part of the west-facing slope of Indian Grass Point.  It’s a steep hillside covered by a thick tangle of bush honeysuckles and prickly ash, but adjacent to a prairie opening and some savanna we’ve been restoring.  The left photo shows the way it looked before I started clearing.  The right photo shows what it looked like a few days later – now we can see through to the prairie opening.  As I was working I found pussytoes, wild strawberries and monarda still surviving under the brush. 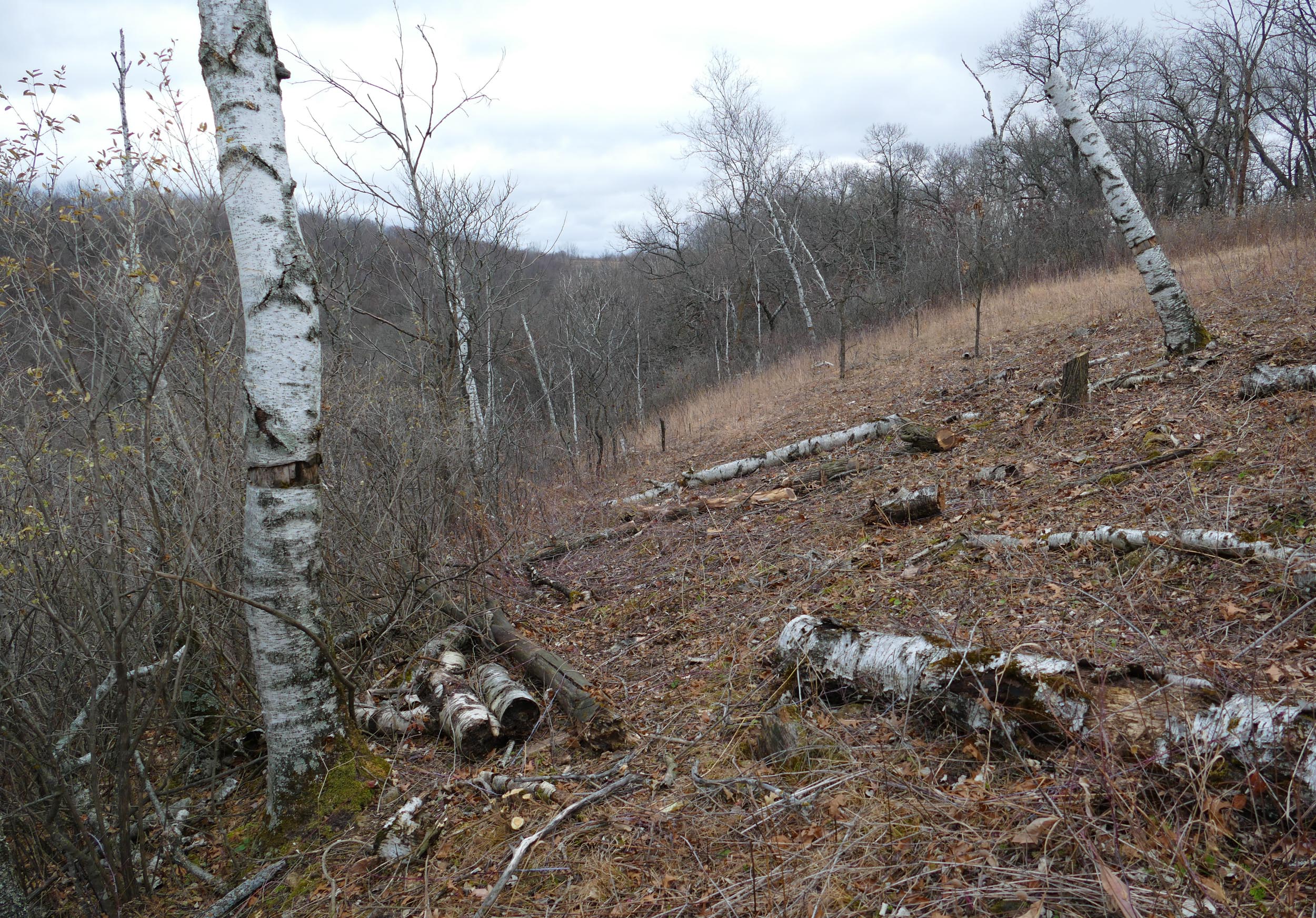 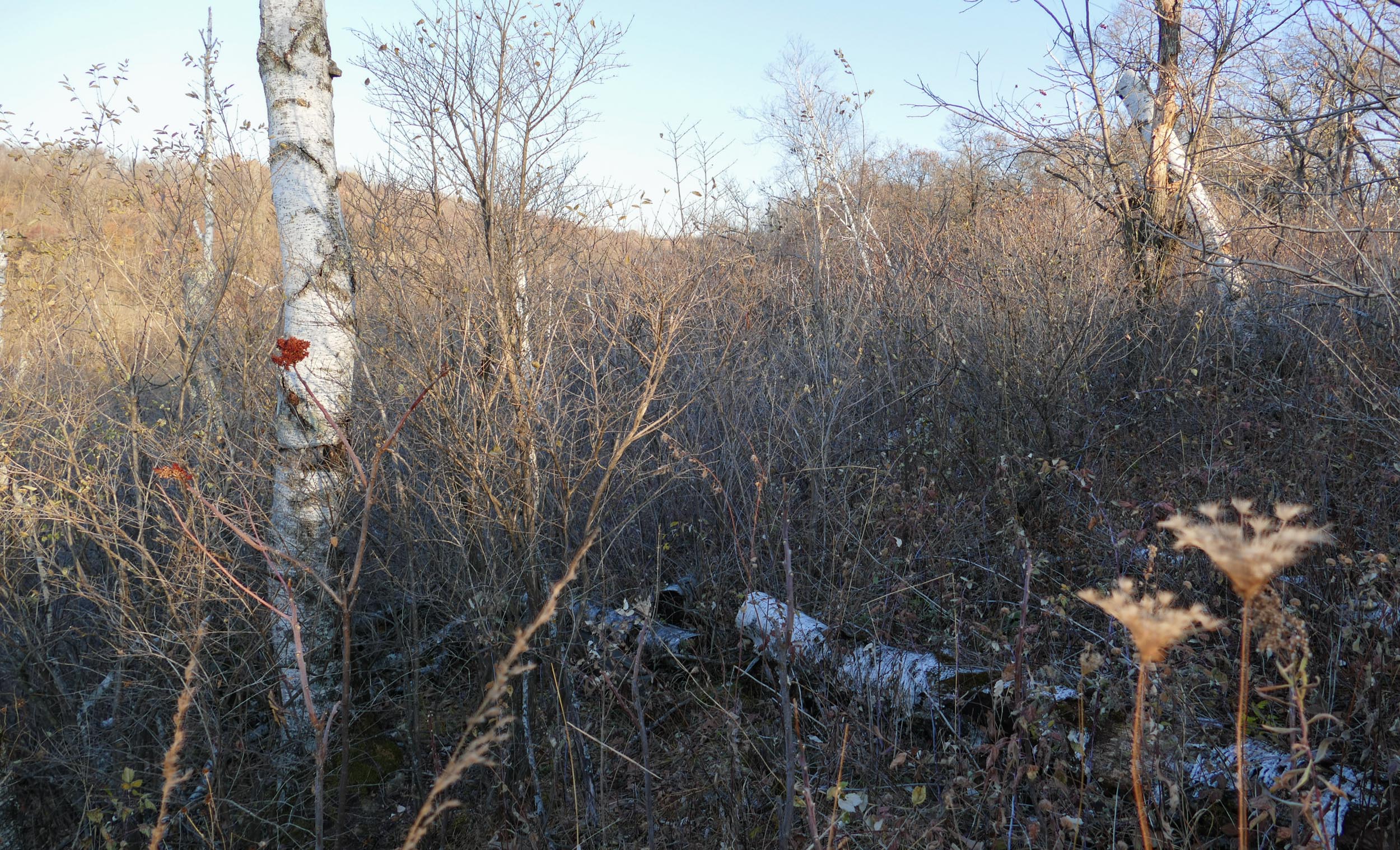 There’s plenty more to do – the brushy thicket continues from the left side of the photo all the rest of the way down the hill.

We spent a few days cutting and removing some of the small trees from the savanna area above that same hillside.  We started clearing this savanna many years ago, but weren’t as good at cutting trees then.  The left photo is from 2010.  The right photo is of the same place taken a few days ago.  I girdle the birch trees to kill them, but  leave them standing until they fall on their own.  It’s safer for us than cutting them, and they provide habitat for insects and woodpeckers. 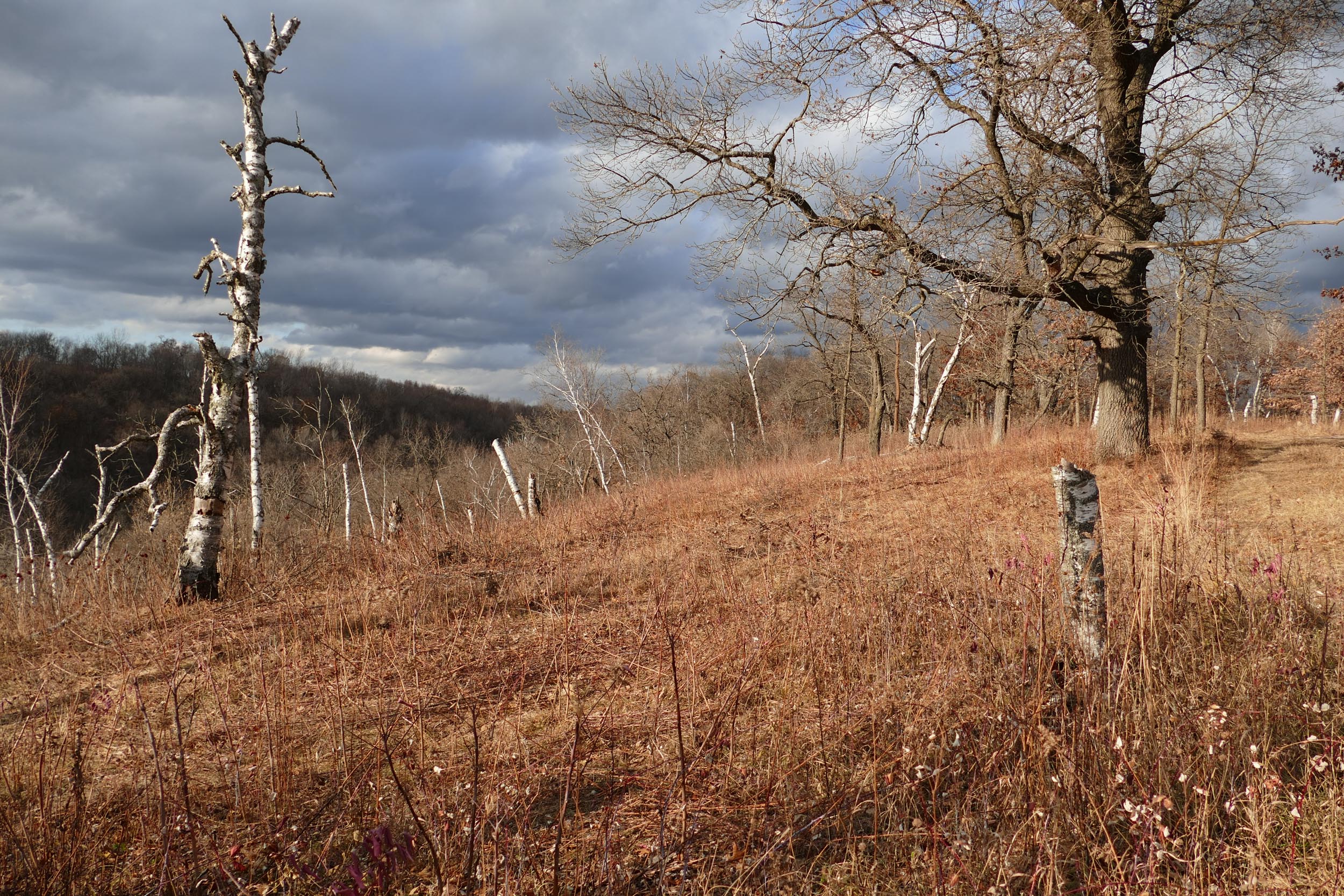 And one more comparison.  The left photo is a different view of that same savanna from 2003.  We had mowed out the brushy central area,  but hadn’t cut any trees or any of the larger bushes.  On the right is a photo from a few days ago. 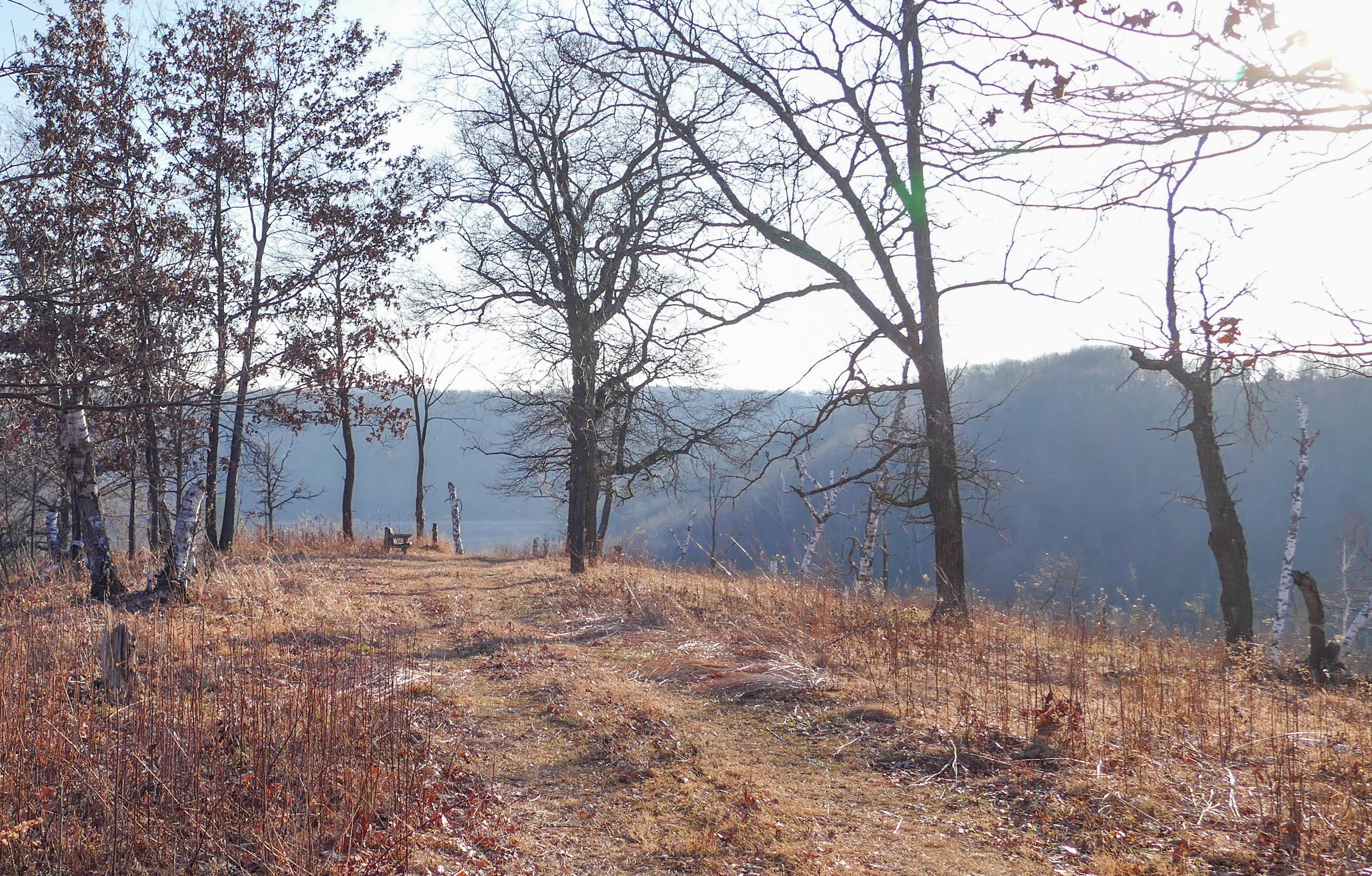 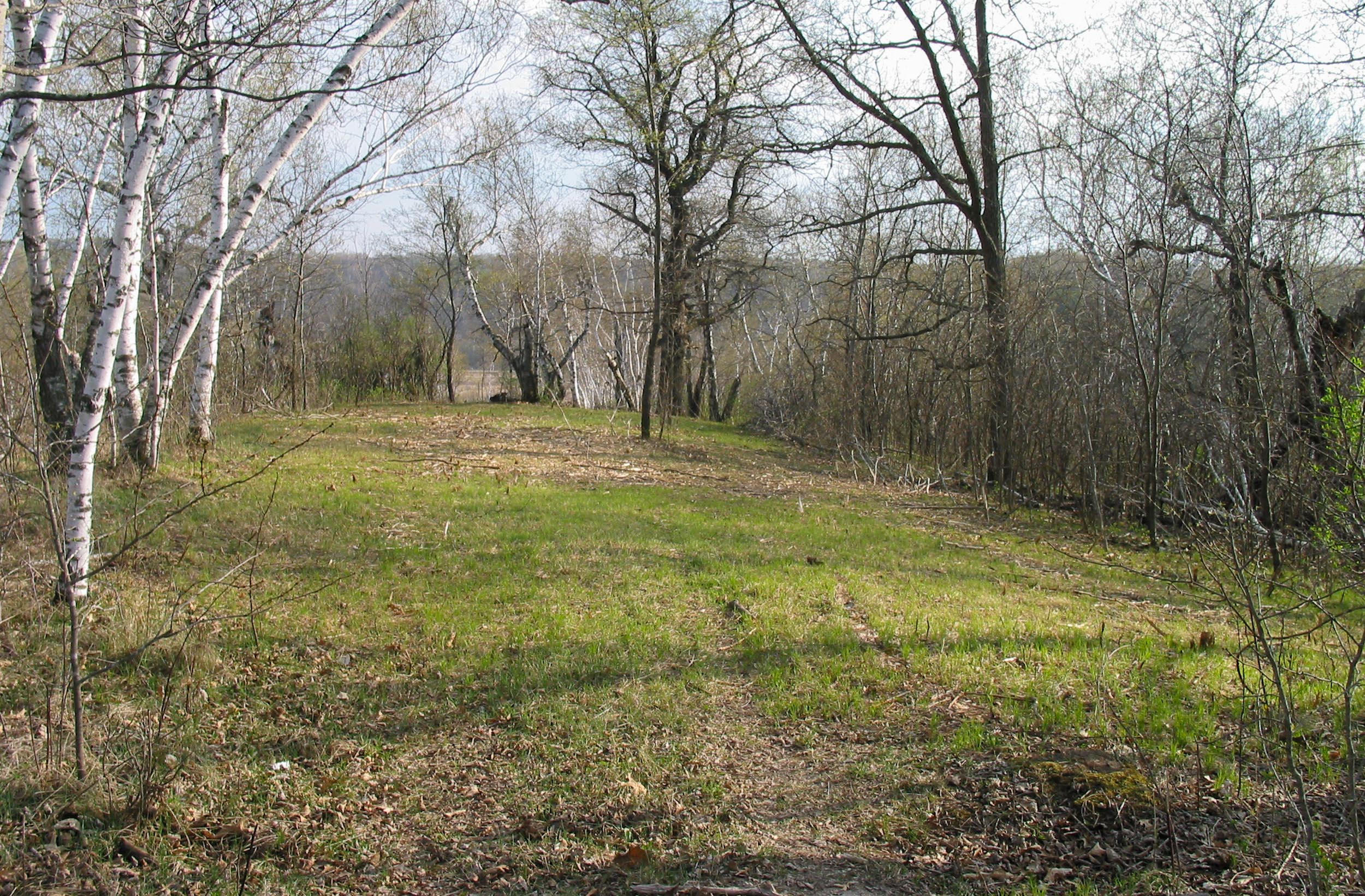 Mike has been taking short videos and putting them together with some of the recent sounds he’s been recording. Here he is taking video with his tiny new camera. 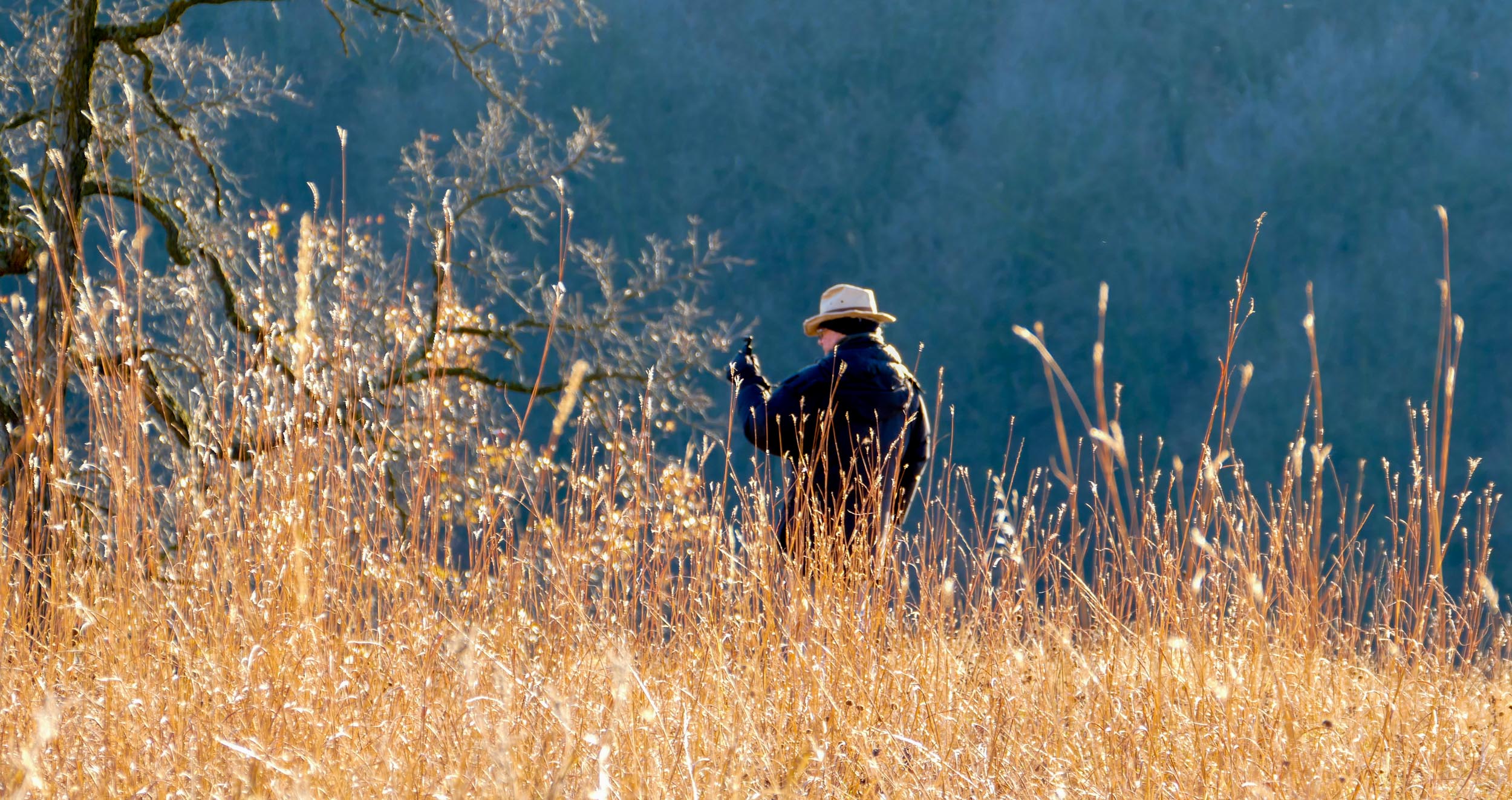 Here’s his first video.  Both the sounds and video are from the last few weeks. 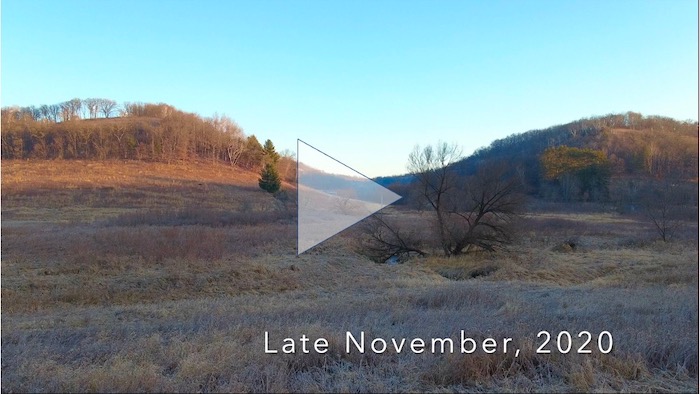 To learn more about how he’s getting the sounds, and to hear more examples, visit his new website: EarsInTheDriftless.com.

We saw these 3 young Bald Eagles in a tree on the point above the house, being monitored by dozens of crows.   The eagles flew up when they saw us coming. 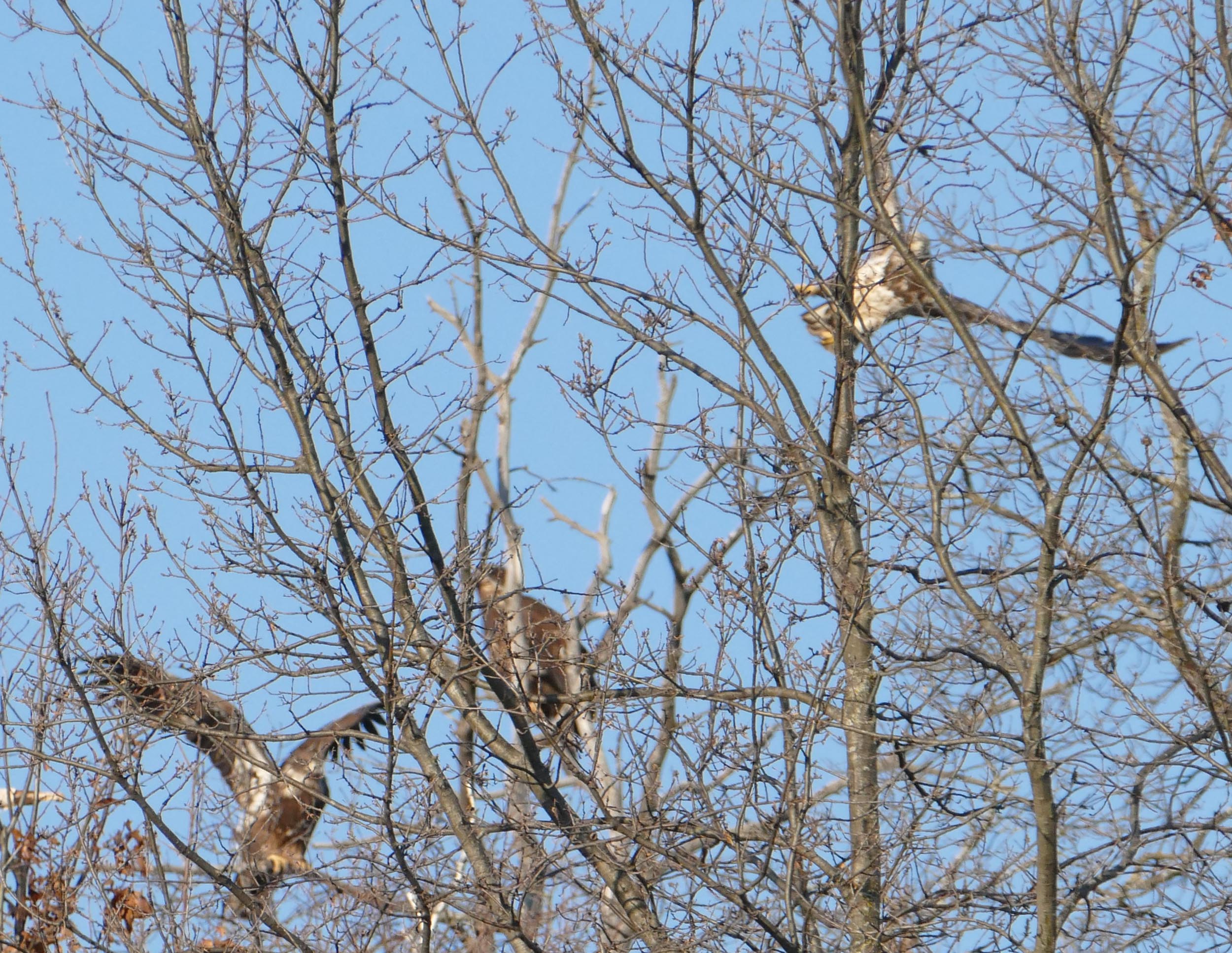 Here are the two that didn’t fly right away. 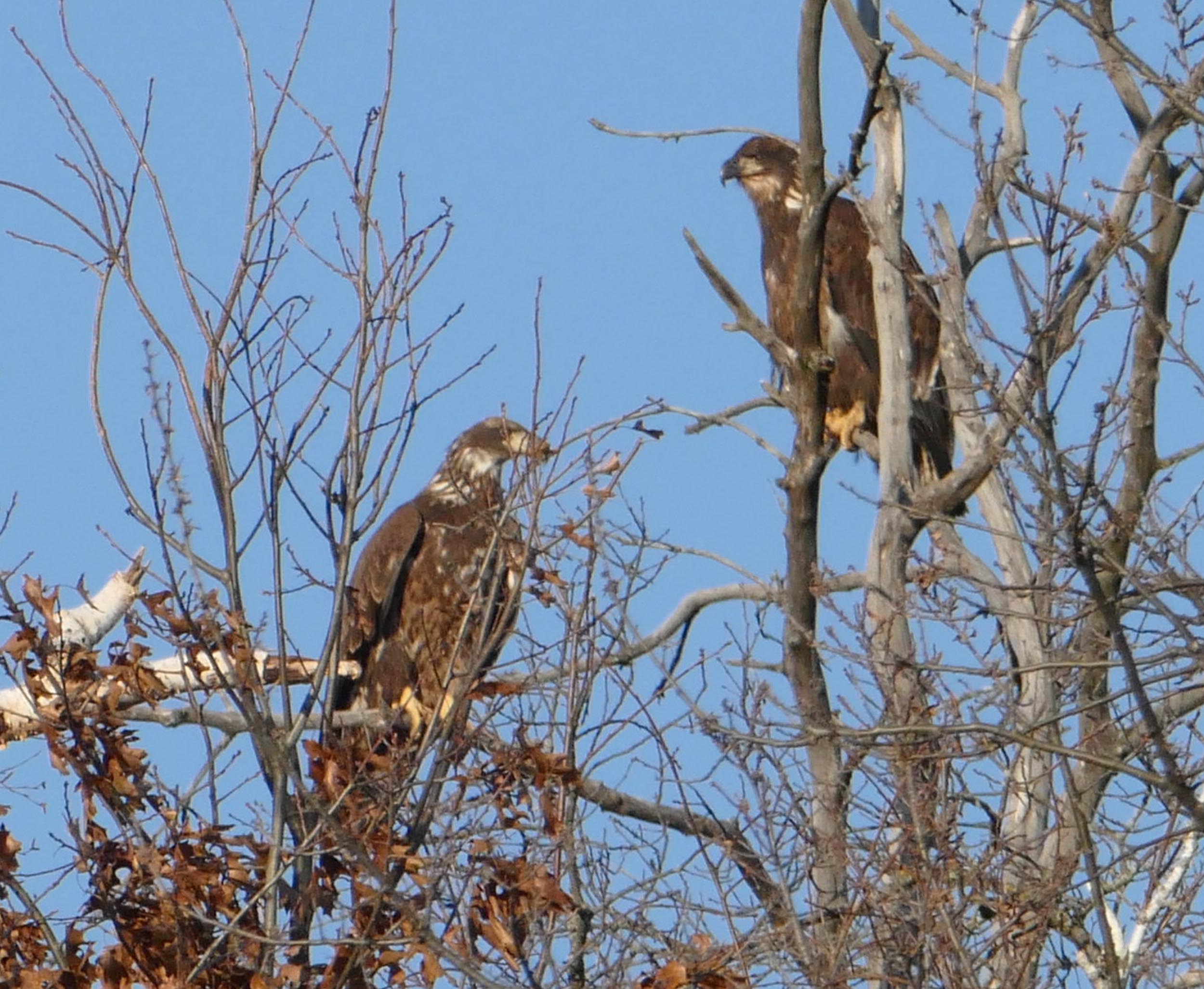 This was the bravest one – it stayed until we were quite close.  Scott Mehus, from the National Eagle Center, says it’s probably a first year bird. 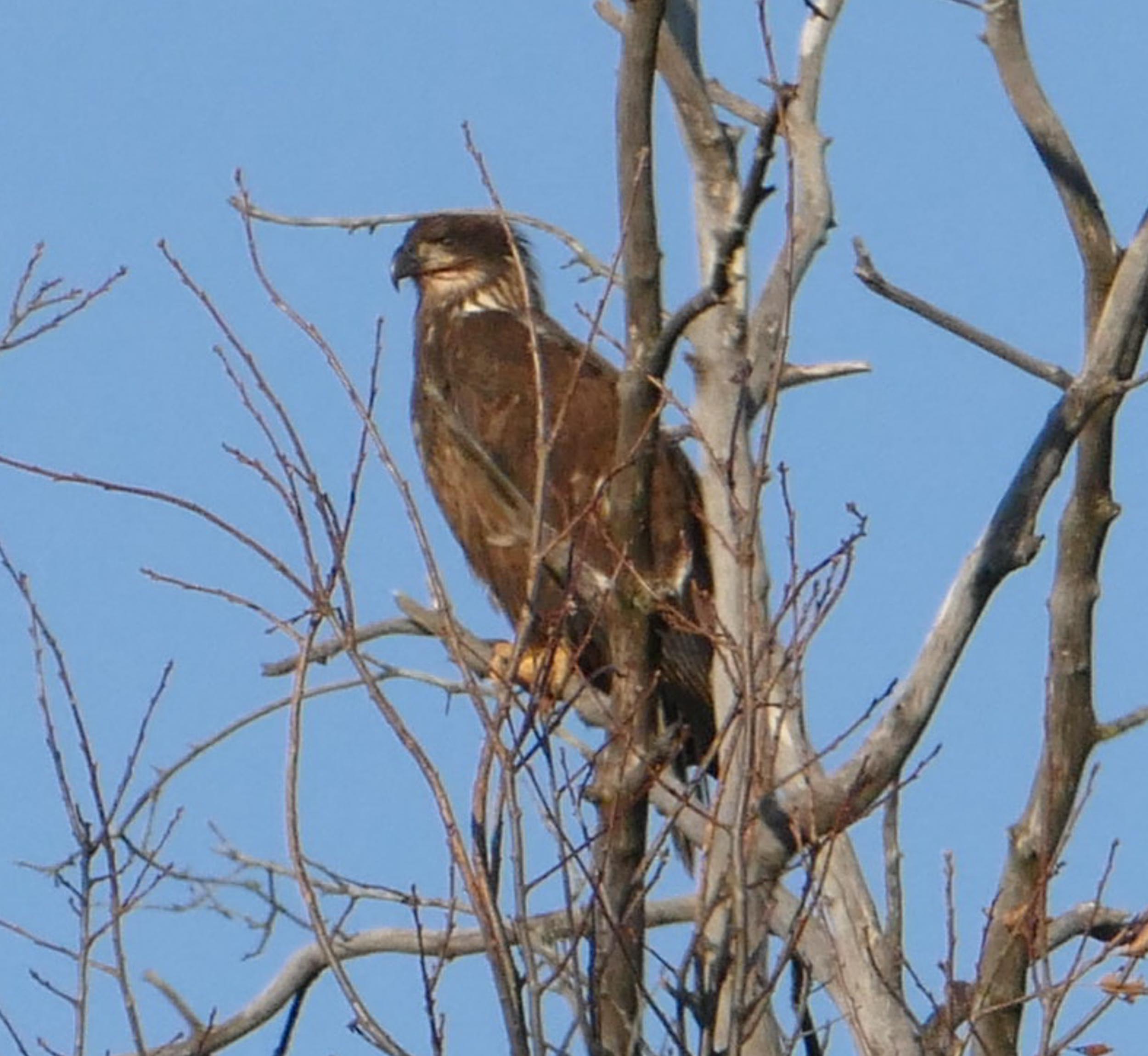 We’ve been watching hundreds of crows flying north across our land every afternoon.  I think they must be heading to a roost.  They come in big waves – sometimes small groups, sometimes dozens together.  They talk to each other constantly as they fly.

Now that the leaves are mostly gone from the trees, we can see silhouettes of the tree branches.

After an ice storm 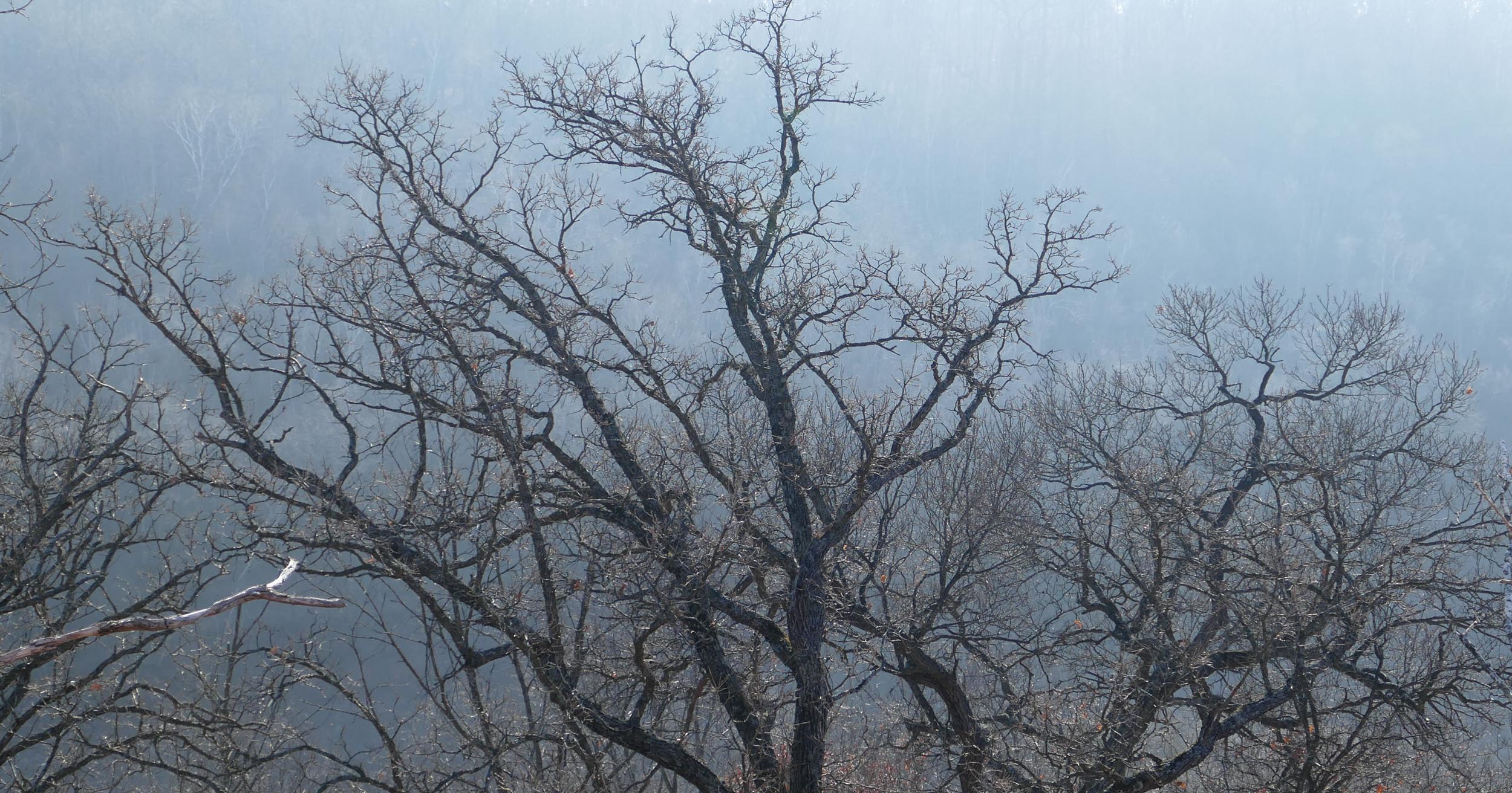 Another view of the ice storm