It’s odd weather for mid-September – still very warm but it usually gets cool at night.

All the asters are blooming now. I visited a neighbor’s prairies and found a wonderful prairie field, with very few grasses, full of white and purple asters and yellow Showy Goldenrod. 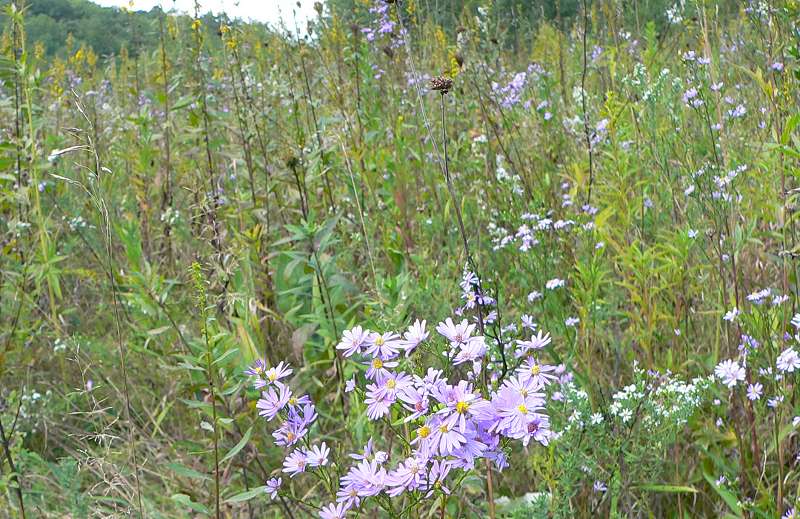 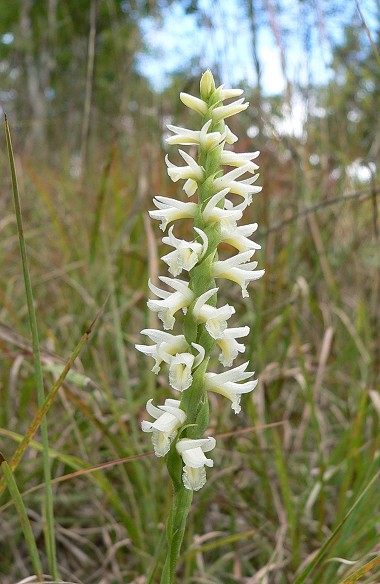 Ellen and Ann came for dinner and we took a long walk up to Hidden Oaks and the Knife Edge – the Knife Edge prairie is looking particularly beautiful. The blazing star has finished blooming and now it’s all purple and white asters and Showy Goldenrod. 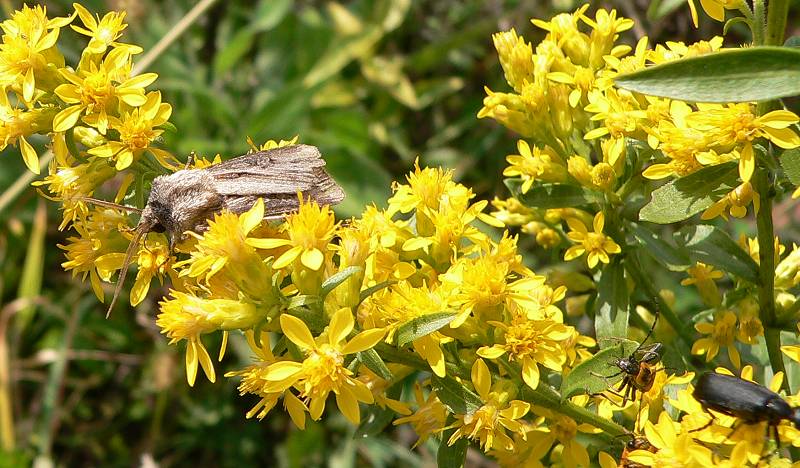 I collected seeds in the wetland and found a wonderful remnant area of flowers that looks a lot like the areas we planted after we sprayed for Reed Canary Grass. It’s nice to know that we planted the right species and in the right proportions to be authentic.

There are still quite a few butterflies – mostly Black Swallowtails, Red Admirals, and Blues, and some fresh new individuals of species that overwinter as adults – Milbert’s Tortoiseshells and Commas.

Black Swallowtail on some of the last few Swamp Thistle flowers. 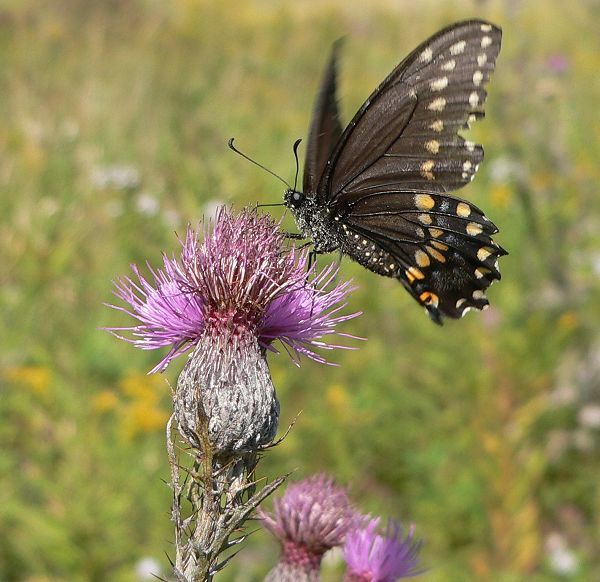 I found a web nest that Baltimore Checkerspot caterpillars make – it’s on a Turtlehead stalk with lots of small Baltimore Checkerspot caterpillars crawling all over it. They make this nest in the late summer and use it for molting and protection from predators. Later in the fall they’ll go down to the ground around the stalk and make another next in the vegetation next to the ground. After they emerge in the spring they won’t be as picky about what they eat – they’ll be able to eat many of the common wetland plants that are in this area.

Here’s the nest on the Turtlehead stalk. 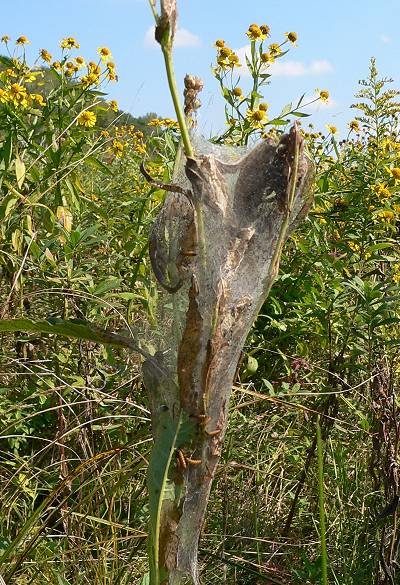 Here’s a close-up with the tiny caterpillars on the outside of the nest. They were very active – crawling very quickly all over the surface. 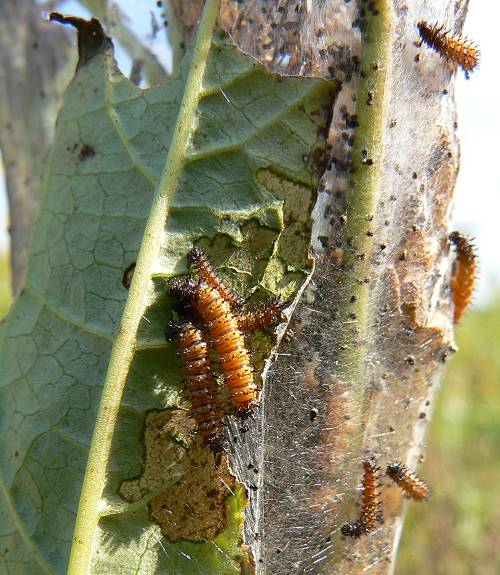 We saw a small snake – I think it was a young Plains Garter Snake – on the road. It had stripes and a pattern of squares between the stripes. Here’s a photo – not a good one because it was taken with Mike’s tiny pocket camera and the snake was moving very fast. The snake didn’t like being followed – it coiled up and hissed and threatened to bite – a very fierce little creature. 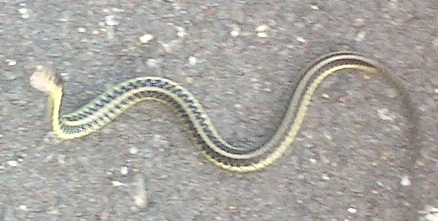 I walked back into the northern part of the Narrows Prairie – I hadn’t been there all summer. I found lots of weeds – I think we probably should have mowed a bit more aggressively. (Next year we’ll try mowing the first year prairie every few weeks, and mowing the second year prairie once or twice – for Sweet Clover, Queen Anne’s Lace and Canadian Horseweed (Conyza canadensis). But there are lots of prairie plants too. I saw plenty of Stiff Gentian and White Gentian blooming, and still some Oxeye and Black-eyed Susan. And lots of Asters. 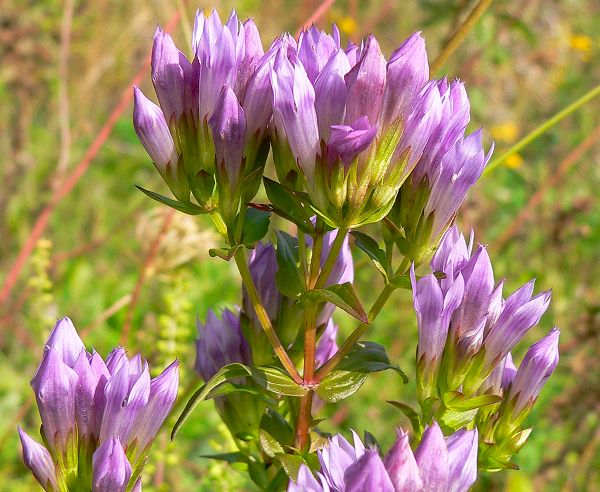 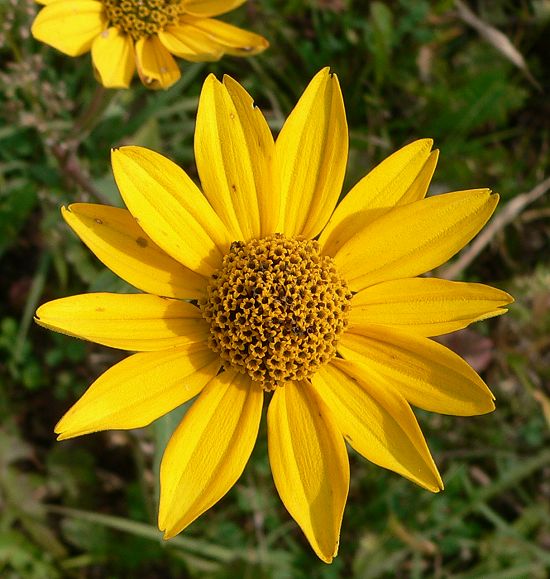 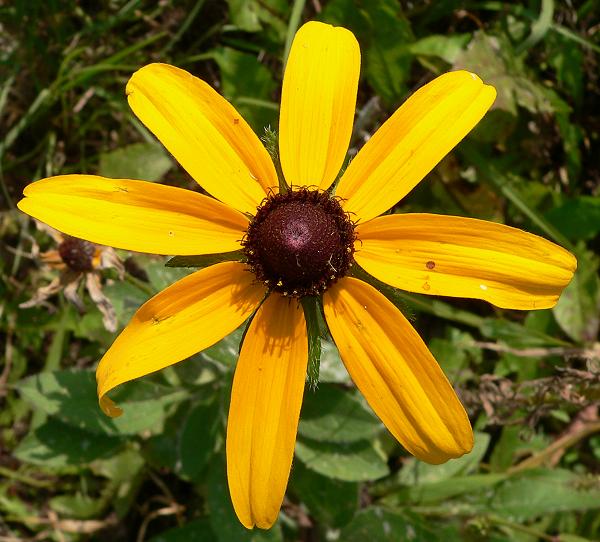 Frost Aster with a bee 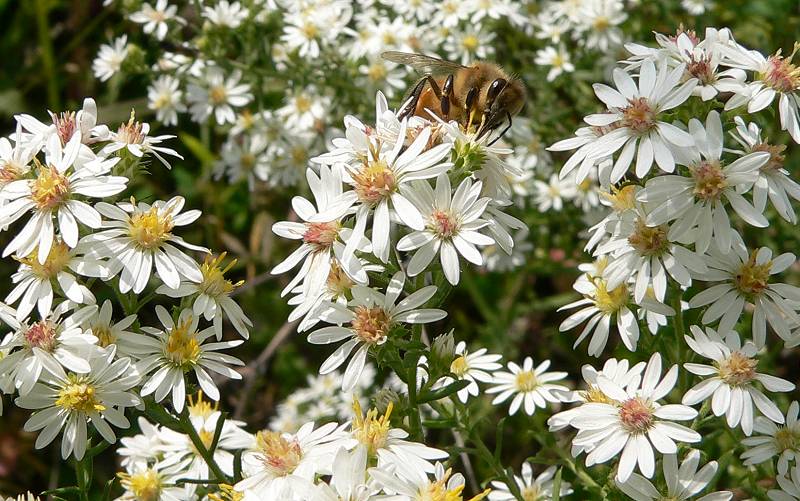 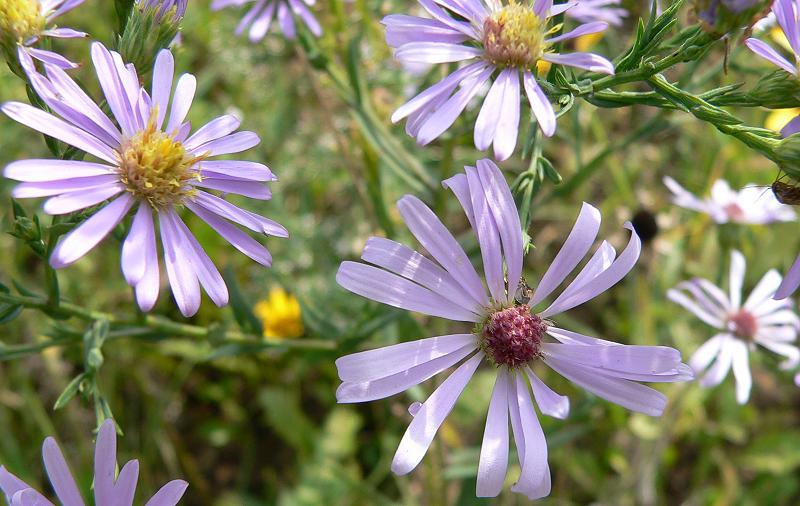 I saw a Great Horned Owl fly up into a tree at the back of Goldenrod Valley, and two nights we heard Screech Owls. It’s nice to know that there are still owls around – we haven’t heard many in the last few years, and I was worried that West Nile Virus had killed them all.

Mike mowed some of the edge of 3 Finger Valley – the area where the intermittent stream runs. I thought I would try planting some forested stream-edge plants there – so it isn’t all 8 foot tall Giant Ragweed. Here’s a photo after the mowing – there’s a buck coming out from behind one of the Walnut trees. 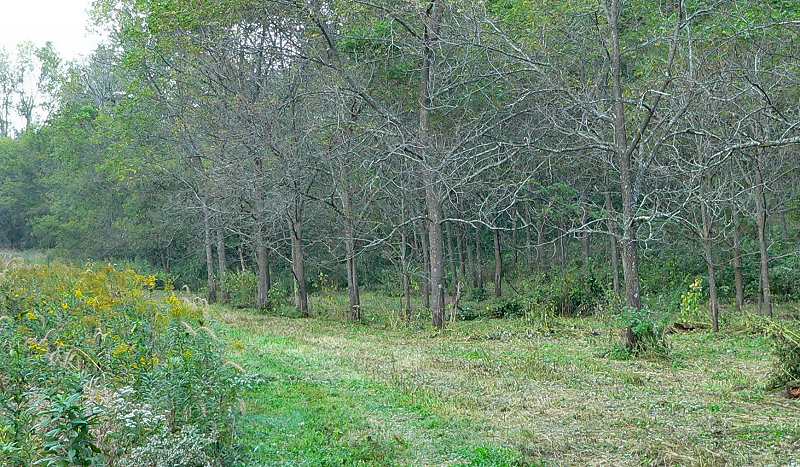 Wild Turkeys have started appearing again – they were busy raising families all summer and we haven’t seen them very much. But now they’re bringing their families out into the open. Here’s one family – two adults and 10 young ones – in front of the house. 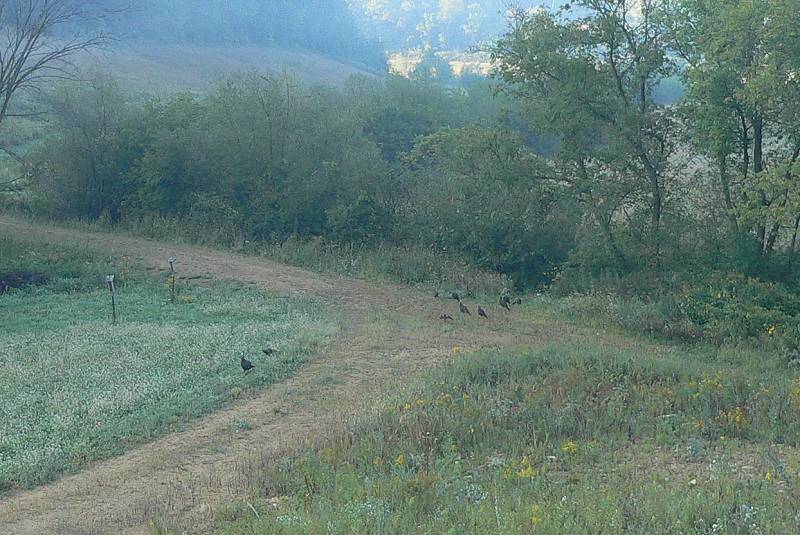 This is New England Aster – one of the most beautiful asters 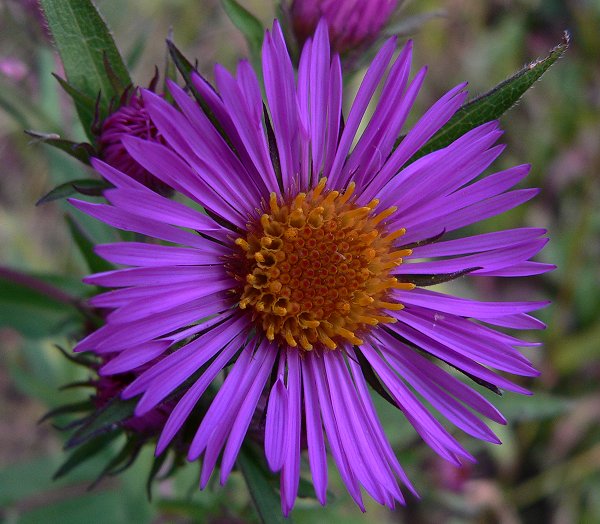