The goldfinches are busy nesting and feeding babies – I’ve found several of their nests now.
This one in 3 Finger Valley had 5 eggs this week. It’s right along the edge of our path, so the parent flies up every time we walk by and we can keep a close watch on its progress. 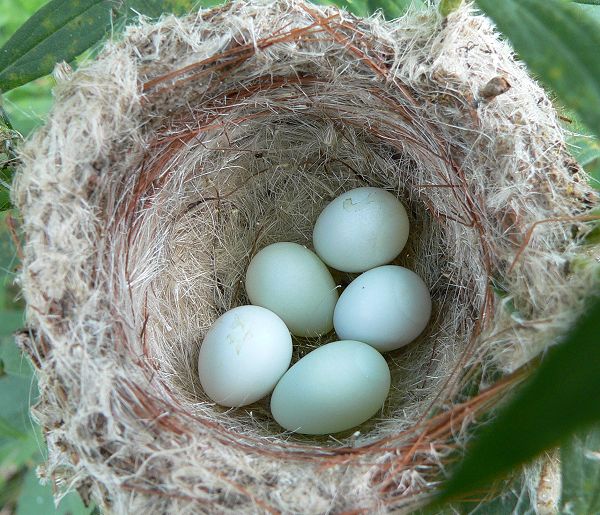 This nest was in a Field Thistle along the roadside. I started to cut some seed heads from the top and discovered the babies watching me. 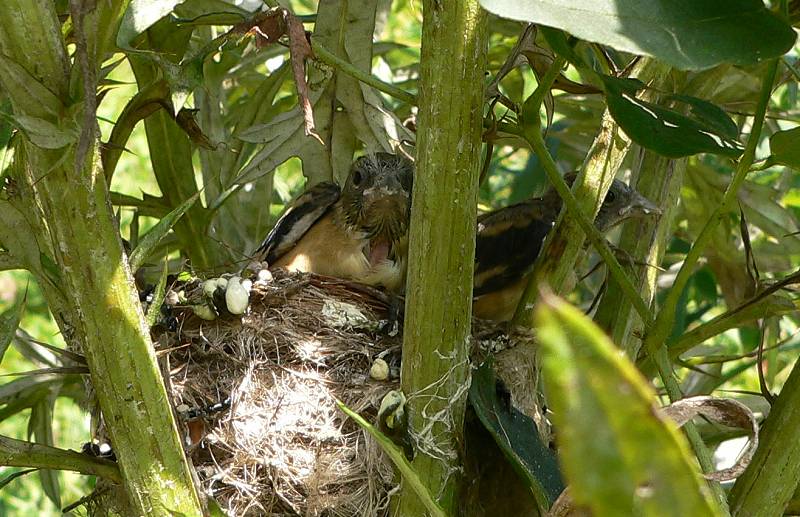 The areas where we mowed and sprayed Reed Canary Grass last year have been a great success. The seeds I planted have been growing and many of them are flowering in their first year. (Wet prairie plants seem to mature sooner than dry prairie plants.) This week the Tall Swamp Marigold was blooming – I collected the seeds from the Buffalo River Valley last year. 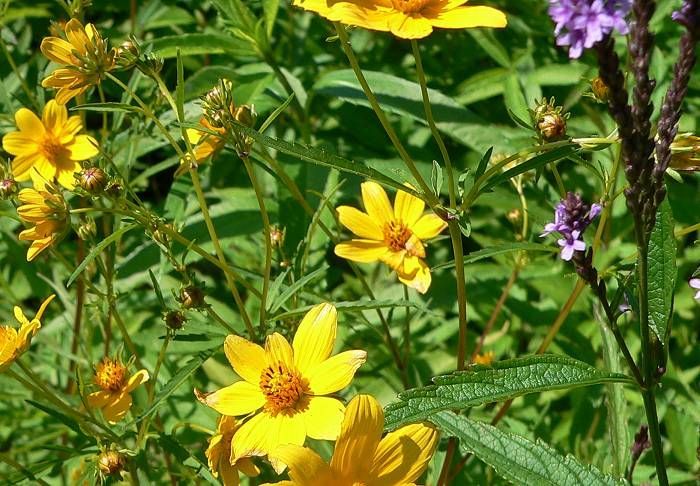 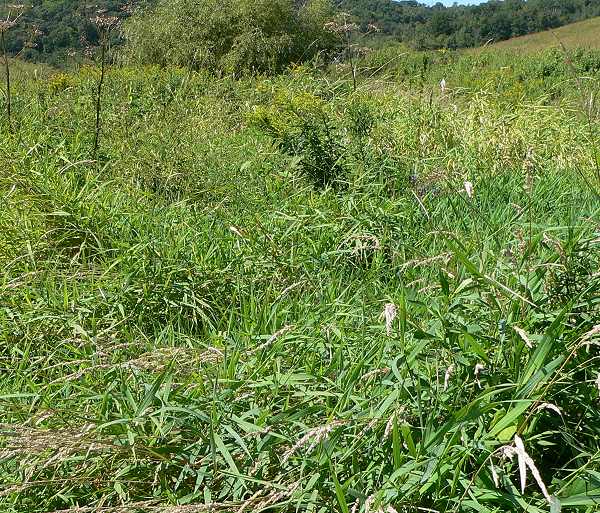 And here’s the large area east of the driveway after mowing.

Mike also mowed along the driveway and discovered a large section of drainage tile that had emerged. It was made of metal – it would be interesting to know when farmers used metal drain tile so we’d know when the system was installed. I suspect there’s drainage tile under most of the more disturbed parts of the wetland. Hopefully it’s old enough that it’s deteriorating and not draining much water any more.

There are still lots of butterflies on the driveway. I can’t resist taking more pictures of them – they’re such beautiful creatures. 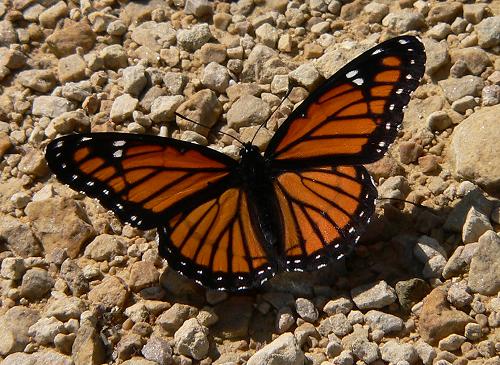 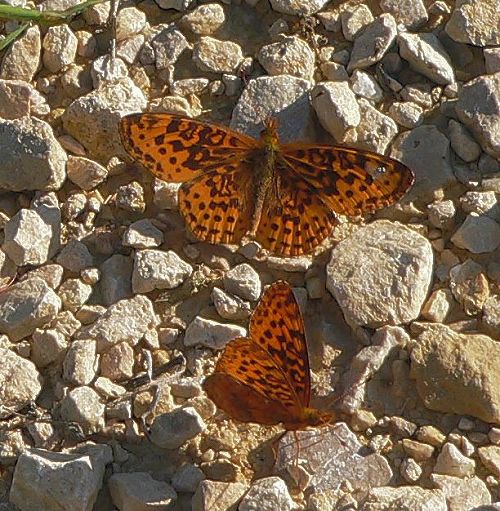 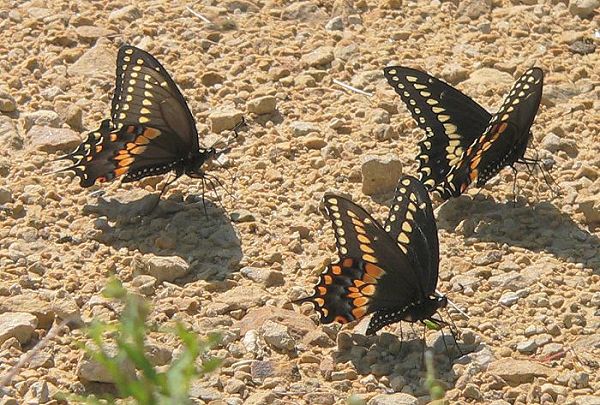 And here’s a closeup of one Black Swallowtail 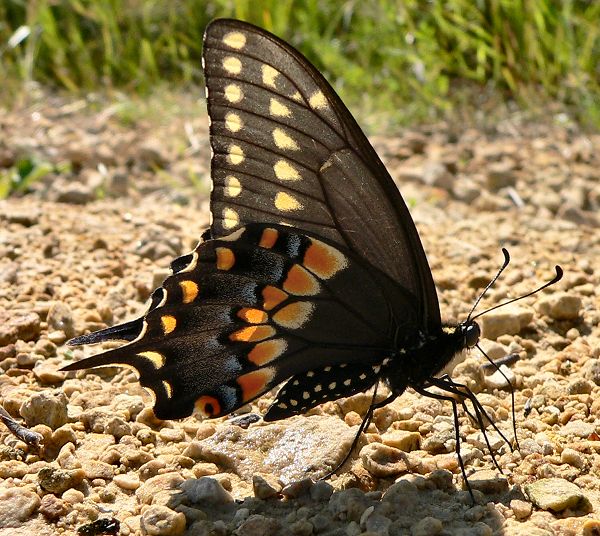 The late blooming wetland plants are all beginning to bloom. 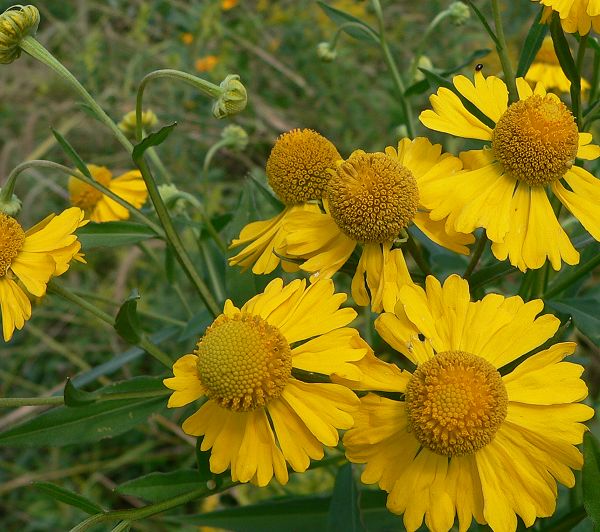 And Cordgrass (Spartina pectinata). Several people warned that this grass doesn’t grow well from seed, but I planted some anyway, in the wet areas in Center Valley. It seems to be growing fine. 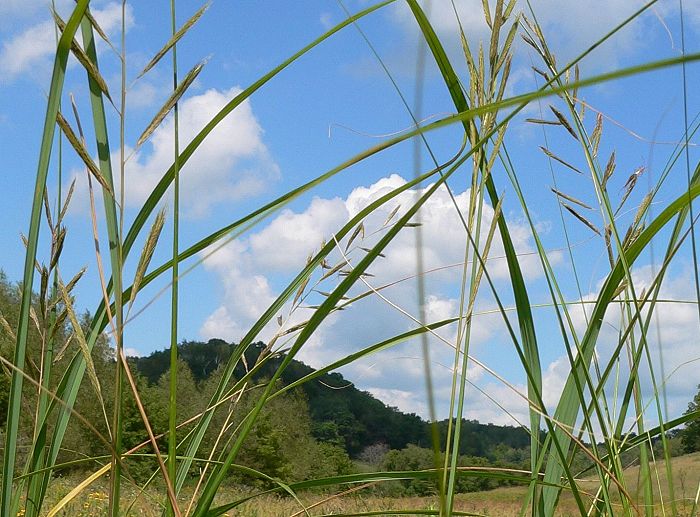 On one of the grass stalks I found a pair of mating insects – I think they’re Broad-headed Bugs (Protenor sp.). 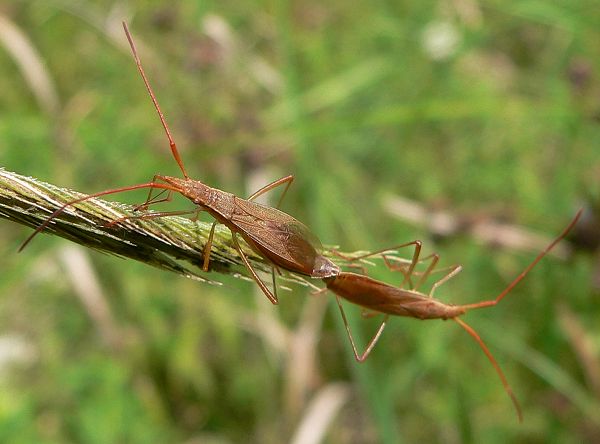 There have been swarms of large dragonflies over our prairies, especially in the evenings. Many of them are Common Green Darners, but there are other species mixed in. They rest on the low vegetation and fly up as we walk by, but they move so fast that it’s hard to get a good look. Here’s one that was resting on the low branch of a birch tree. I think it’s a Canada Darner. 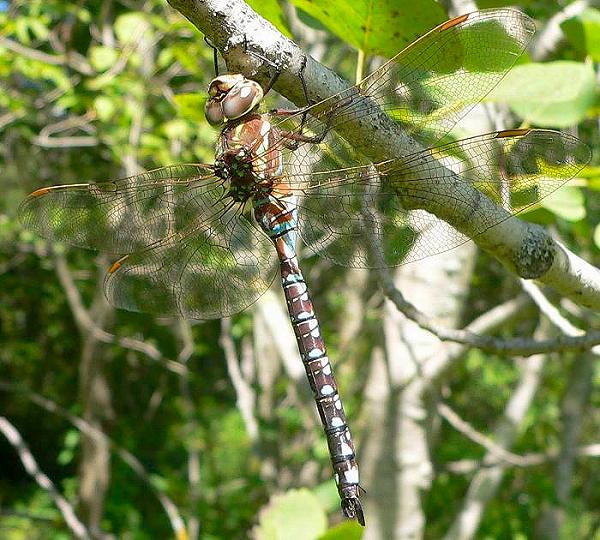 Indian Grass (Sorghastrum nutans) is blooming in all the prairies. I know I planted too much of it in those early prairies, but I do like it – it has a beautiful plume of flowers. 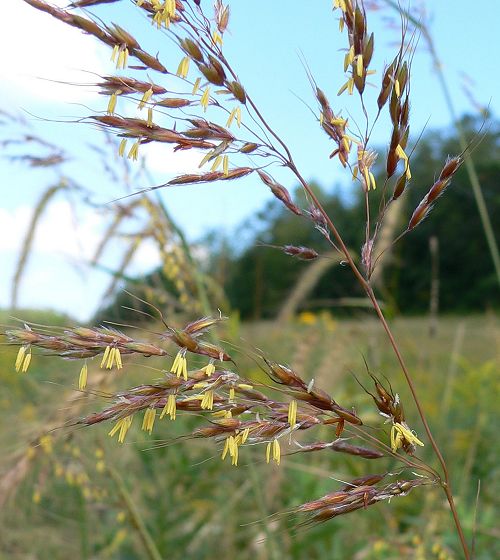 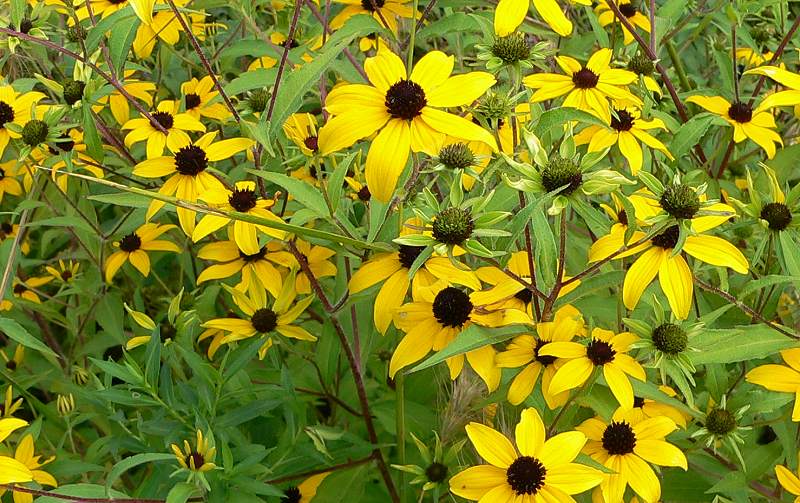 The Monarchs are starting to migrate – they’re flying higher and definitely heading southwest. They’re clustering on the Blazing Star in Hidden Oaks Meadow and the Knife Edge Prairie. 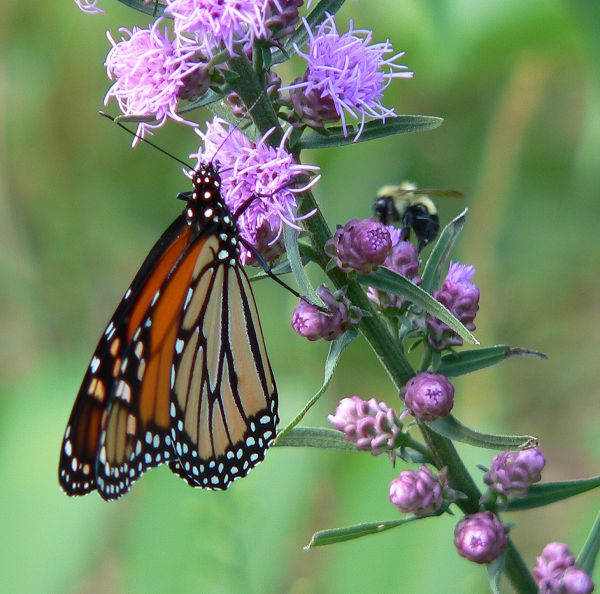 Frogs hop away from our feet as we walk through 3 Finger Valley. They move so fast that it’s difficult to get a good look. I think most of them are Pickerel Frogs. Here’s a Wood Frog that we saw in the woods along the cabin trail. 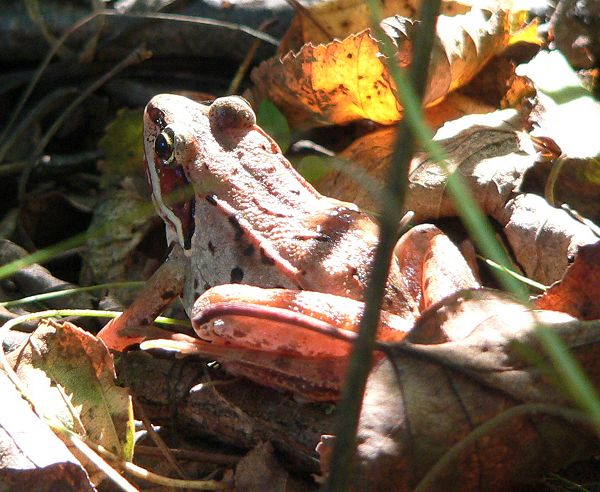 In a few weeks I’ll be starting a class at the U to learn to identify mushrooms. Here are a couple beautiful ones – I think they’re Amanitas. 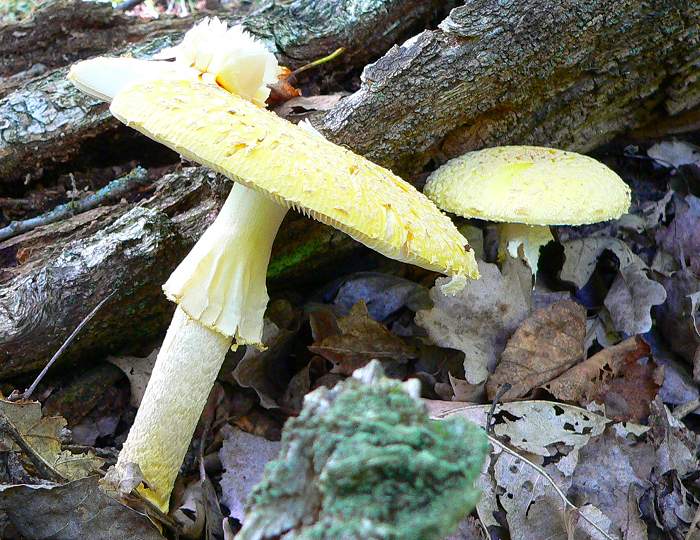