Now that the end of the summer is coming, it’s seed collecting time. I collected Prairie Brome on the Cat’s Paw Prairie – our first real harvest from our planted prairies. And I collected some seeds from the roadsides.
Danny and Cathy, our neighbors from down the road, said that I could visit their prairies and collect seeds from them – so I went over there this week. They have some steep west facing fields that have small oak and pine trees planted in them. There are lots of prairie plants – good for seed collecting – but lots of weeds too.

Here’s an Eastern Tailed Blue on Round-headed Bushclover in one of their prairies. 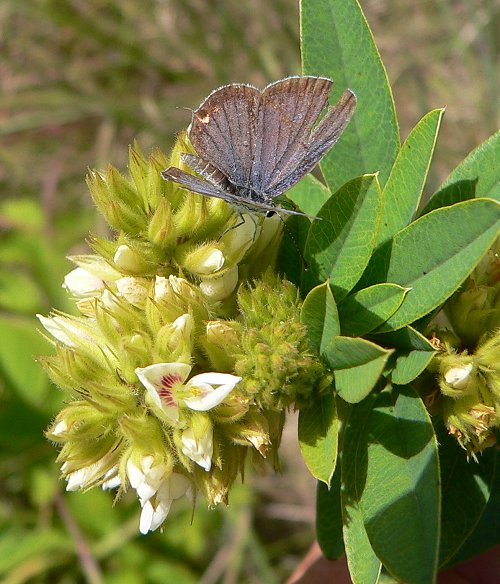 At the top of their hill they have a gorgeous little bluff prairie. It’s small – maybe an acre – with practically no weeds, no sumac, and full of nice prairie plants. Cylindrical Blazing Star (Liatris cylindracea) was blooming (the flowers are actually magenta, but whenever I photograph blazing stars they look purple.) 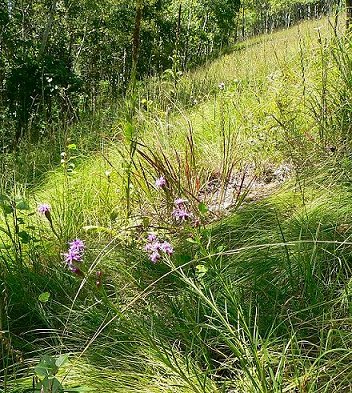 The grasses in this prairie are mostly Side-oats Grama (Bouteloua curtipendula) and Prairie Dropseed (Sprobolus heterolepis). I’ve never seen such a large proportion of Prairie Dropseed in a prairie before. There is a grove of old oaks on the top of the hill above the prairie. There are aspens between the oaks and the prairie, and also on the hill below the prairie so the prairie area is slowly turning into aspen woods. 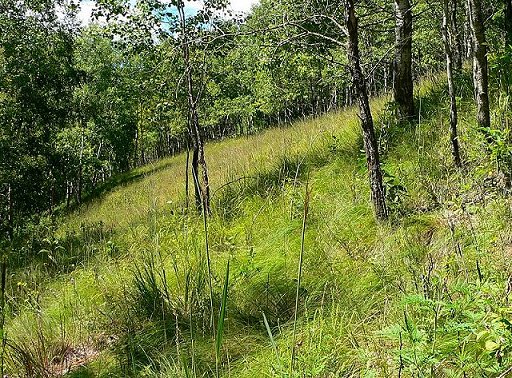 Our wetland is looking spectacular right now – Joe Pye Weed, Boneset, Blue Lobelia, and Giant Sunflowers are all in bloom. 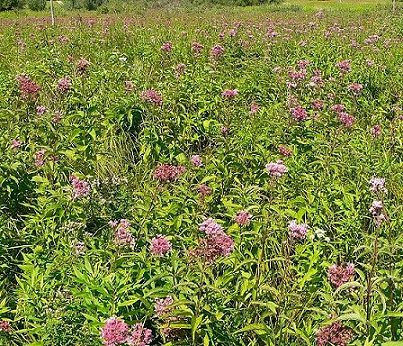 There were lots of interesting insects this week. I’m still seeing Giant Swallowtails, black and yellow Tiger Swallowtails, Painted Ladys and Aphrodite Fritillaries. I’ve been looking for caterpillars to identify now that I have my new caterpillar book. Here’s a photo of one caterpillar – I think it’s “The Asteroid” (Cucullia asteroides) – the same caterpillar I found last week. 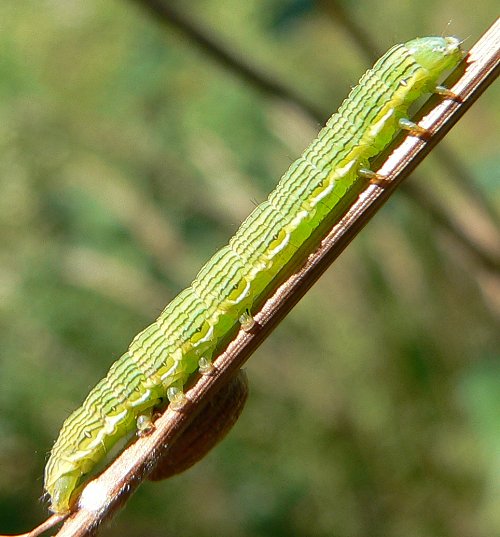 I found several Ambush Bugs on Oxeye flowers – they’re very well camouflaged. (Margot helped me with this id – it’s great to have someone to ask about insects!) Ambush bugs (also called Assassin Bugs) hide in flowers and catch other insects when they walk by. 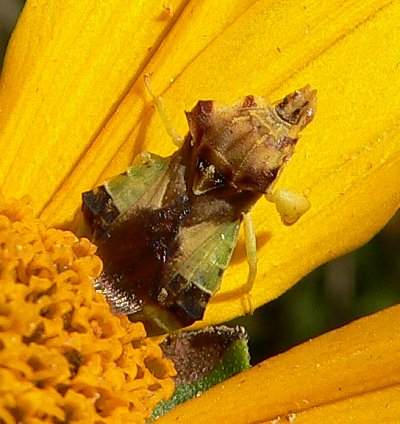 And here’s another view. 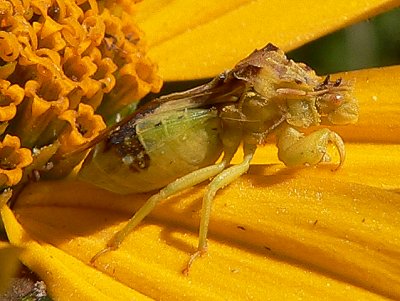 Thistles are wonderful flowers for insects. Butterflies love them, and if I look closely, I can usually find several other kinds of insects nestled in the petals. This one has a bee, some soldier beetles, and another small beetle.

Here are some tiny bees on a sunflower 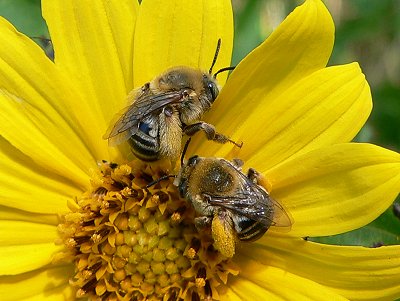 And a Black and Yellow Argiope Spider 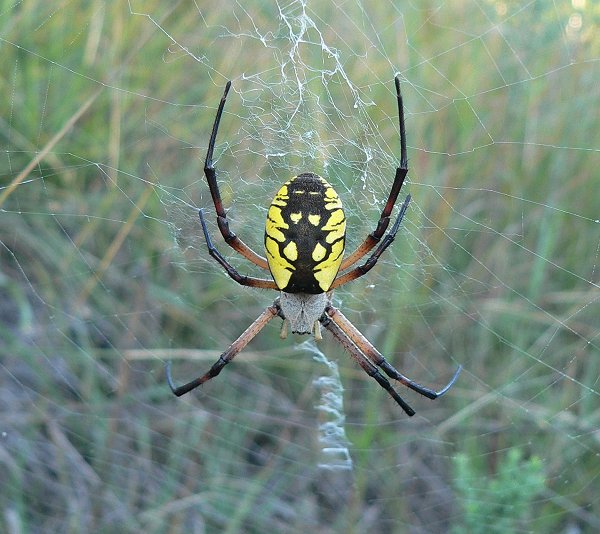 I collected several new plants for the herbarium at Stevens Point – I’m trying to complete their collection of plants from Buffalo County. I don’t think anyone collects from here very often, so lots of the plants we have on our land don’t show up on their maps. I collected two Milkworts 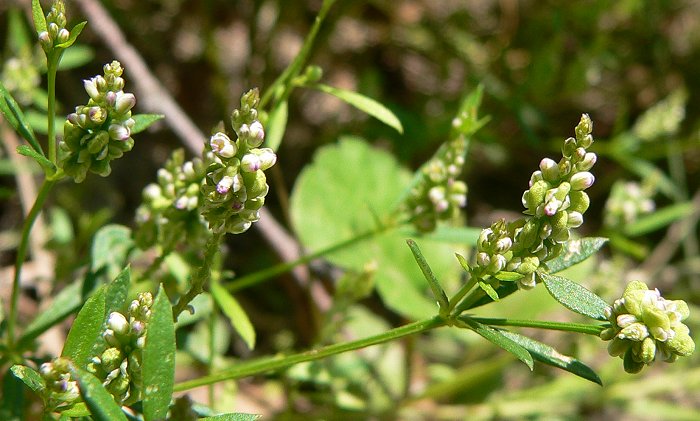 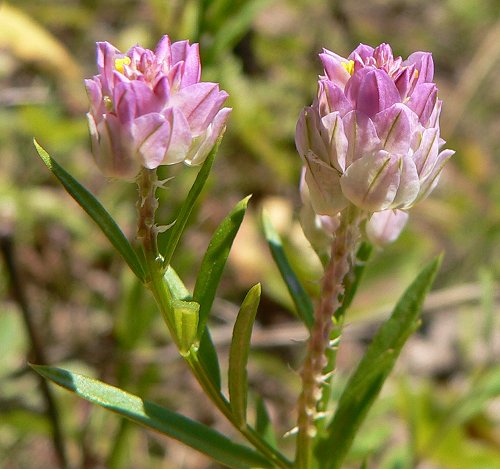 And I found and collected Sticky Hawkweed (Hieracium scabrum) – the first time I’d seen it on our land. You can see the dark sticky hairs on the stems. 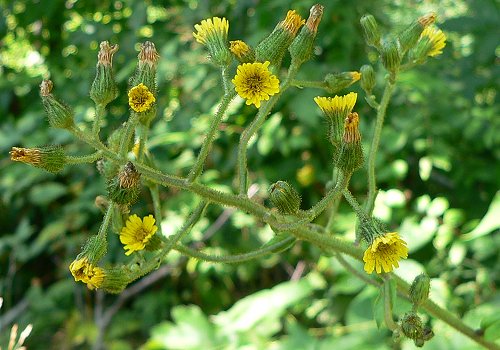 The Knife Edge Prairie is gorgeous right now – the Yellow Coneflowers are finished blooming, so I collected seeds, and the Rough Blazing Star is just beginning to bloom. Here’s a Leonard’s Skipper (or Blazing Star Skipper) on one of the Blazing Stars. 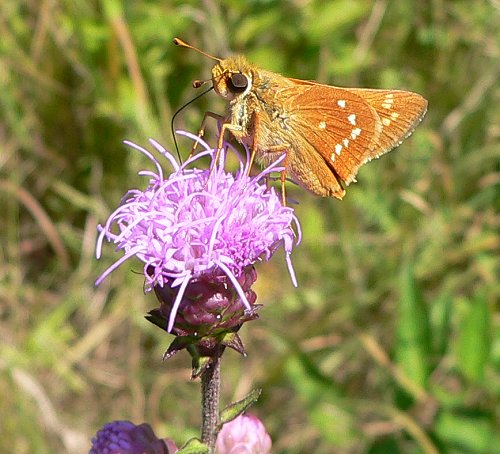 I walked the path through Pine Point Prairie for the first time this summer. The prairie doesn’t look too bad – there are weeds, and there’s lots of Queen Anne’s Lace, but parts of it look good, with plenty of prairie plants and some grasses. Here’s a picture with Stiff Goldenrod, White Goldenrod, Canada Tick-trefoil, Wild Rye, Black-eyed Susan, and Gray Goldenrod. 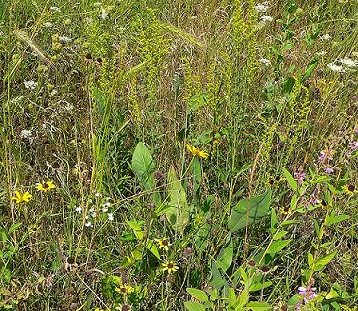 And here’s another with Western Sunflower – this year is the first time I’ve seen it in any of the prairies. 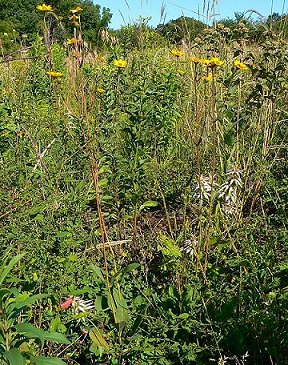 Front garden
I thought I should write a little about my tiny non-native garden. It’s in front of the porch and the ‘dirt’ is entirely the rock and sand that was dug out of the hillside when we built the house. That works fine for the prairie, but garden plants haven’t done as well. This year I dug in some peat moss and compost, and the plants are much happier. Here’s the garden 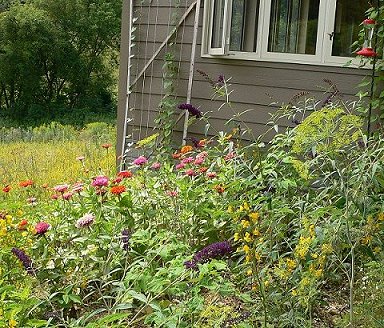 Painted Lady on a Zinnia 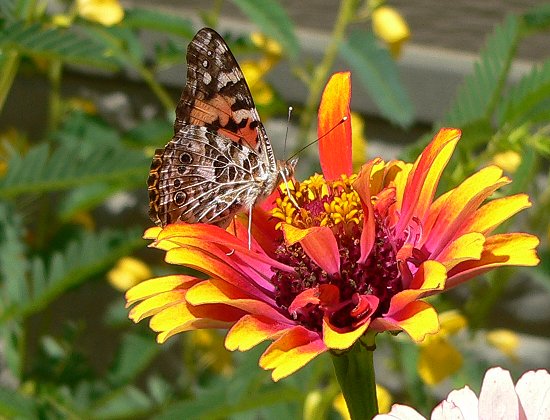 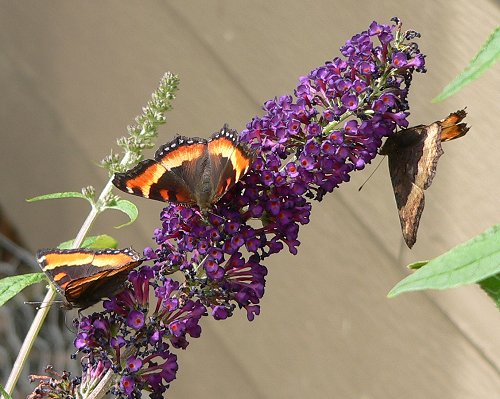 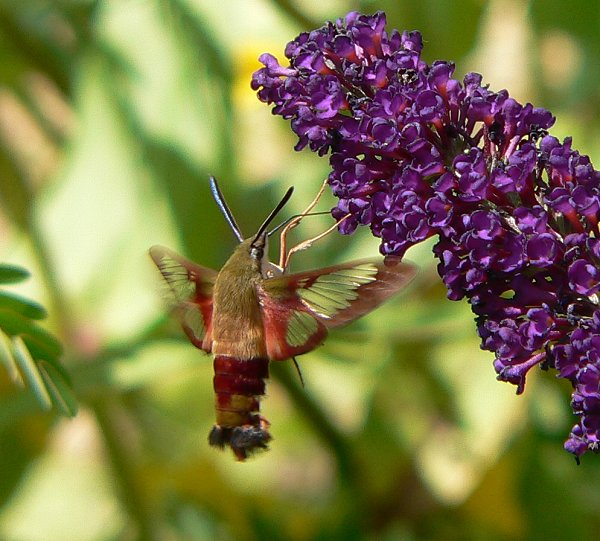 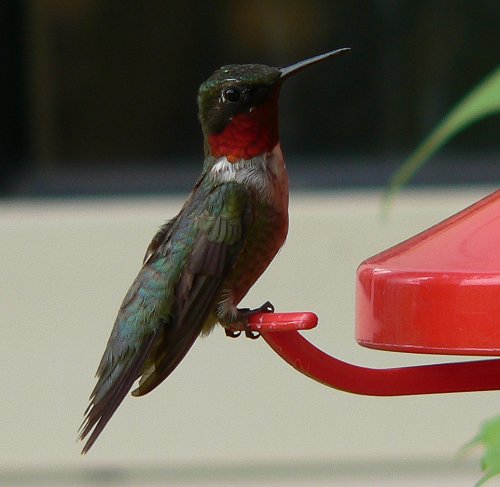 And an Aphrodite Fritillary 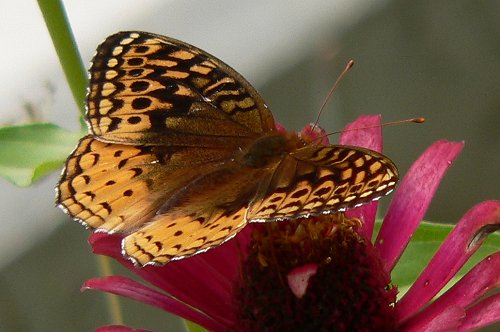 I see lots of Katydids in the prairies – now that it’s late in the summer, they are starting to “sing” in the evenings. 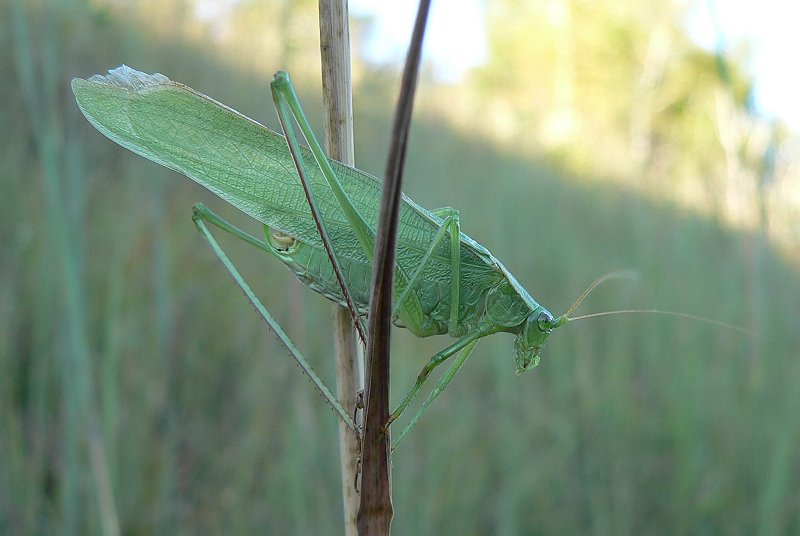 Here’s my favorite picture of the week. This fawn was in the prairie in 3 Finger Valley. It stood very still while I walked by – I’m sure it thought it was invisible. 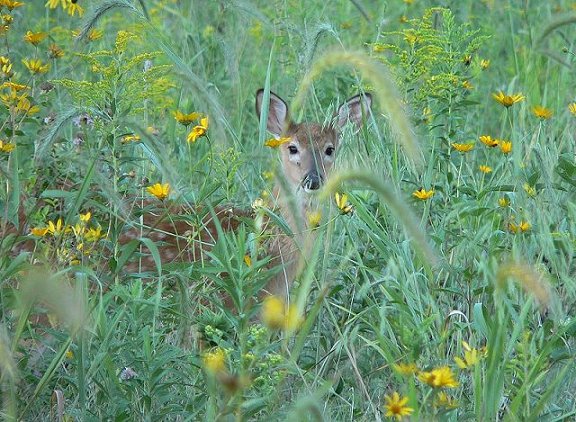