We got 4 inches of rain in the last 24 hours, and the weather changed from pleasantly warm and comfortable, to hot and muggy, for the first time this summer.   It’s supposed to cool off again in a few days.

Our friends Burt and Marcia came to visit the farm last week.  We had a great time – we went on a tour of the prairies in the gator, and had a picnic on the porch. 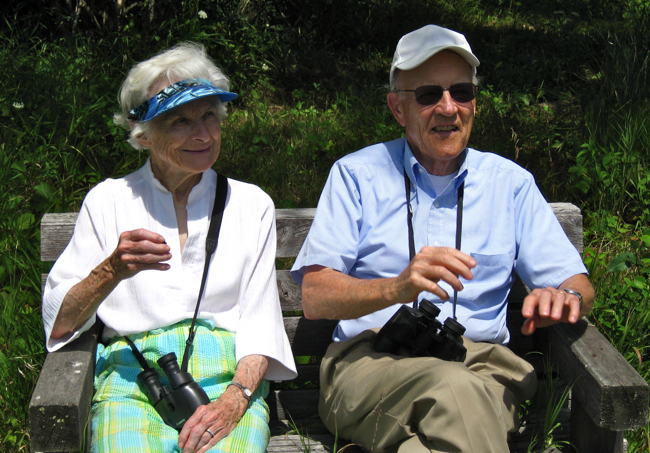 I’ve finally finished pulling Wild Parsnip for this summer.  I wish I could say that it’s all gone, but actually I’ve just stopped because the seeds are so ripe that they’re starting to fall off the plants.  So no more Parsnip weeding until next year.

I weeded several areas of the wetland that I’ve never spent much time in before, and in the process I discovered some beautiful places.  This is one of them – along the western border of our wetland. 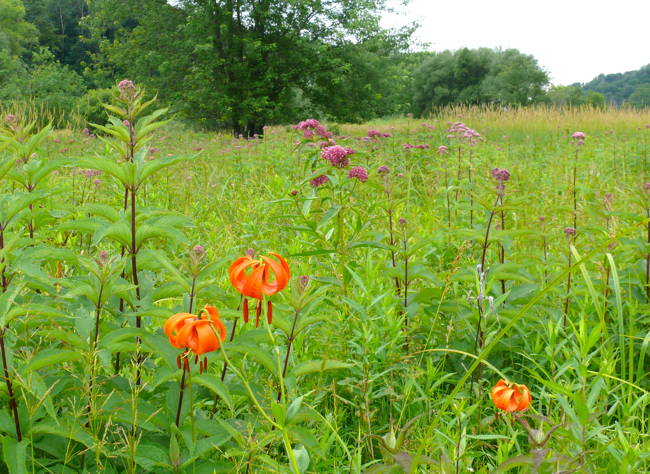 This is another area that I’ve never walked in before. 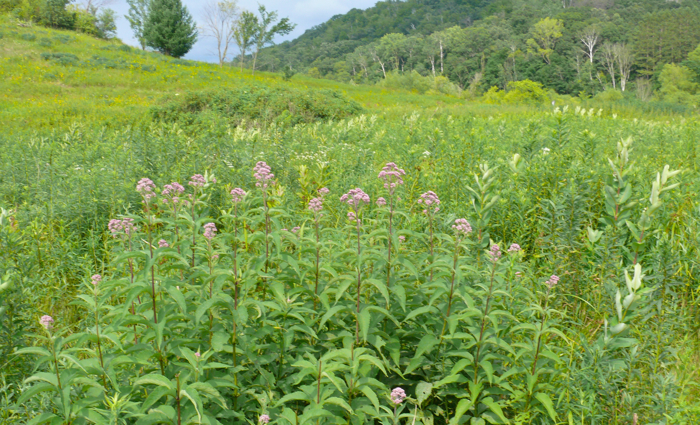 It’s almost an island – there are small streams along two sides, running from springs into the creek. This is one of the streams. 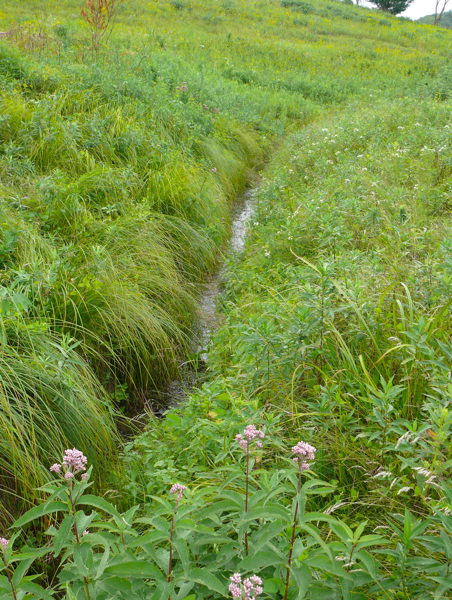 On the third side is a stand of willows – so thick that it’s impossible to walk through. 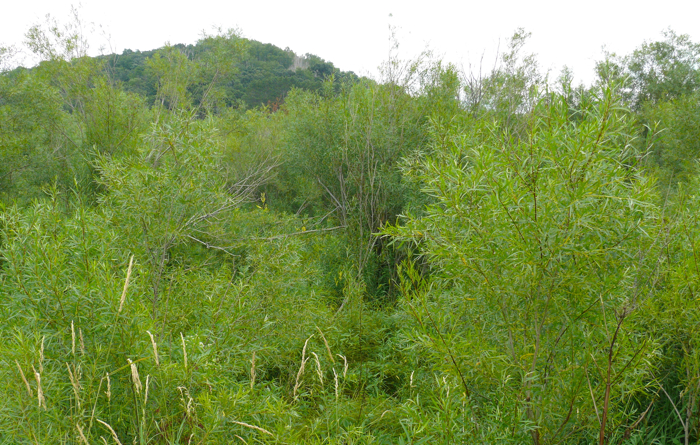 But in between, on the island, are lots of native wetland species.  Here’s another view with the willows in the background. 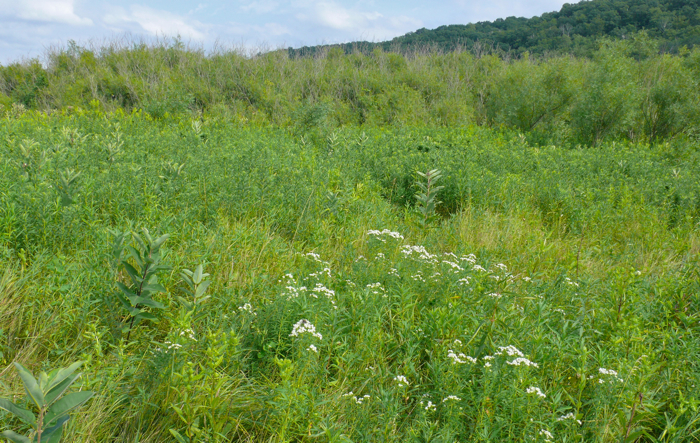 Nearby is a huge sedge meadow that I didn’t realize was so nice. 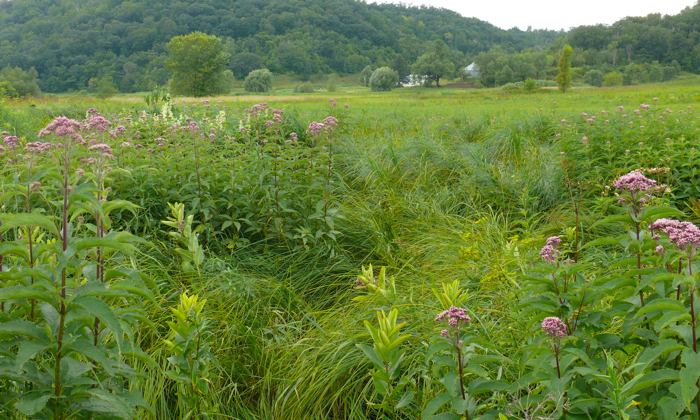 I found a newly hatched Monarch butterfly in the wetland, drying its wings. 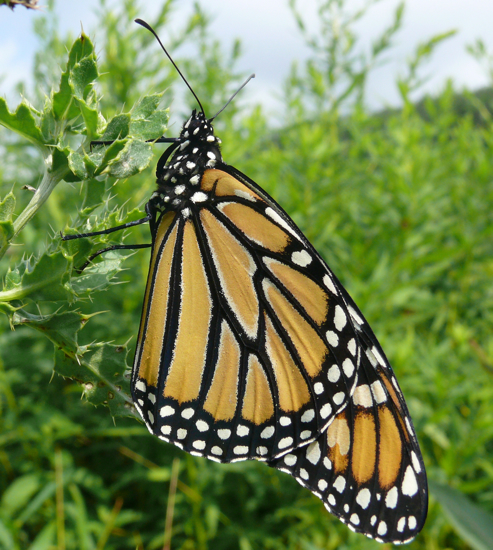 After searching a bit, I found the remains of the chrysalis it had hatched from. 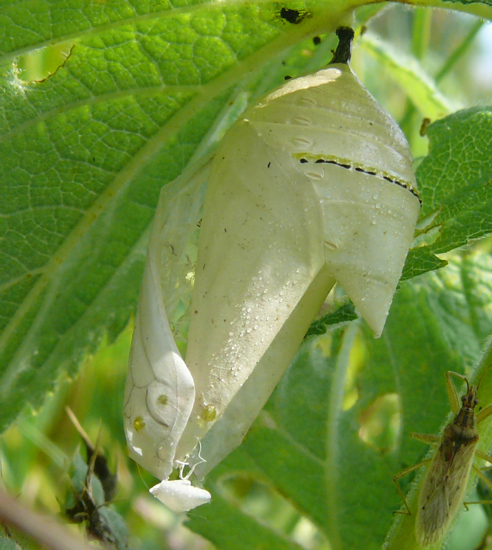 Here are a few more of the bugs and flowers I’ve been seeing. 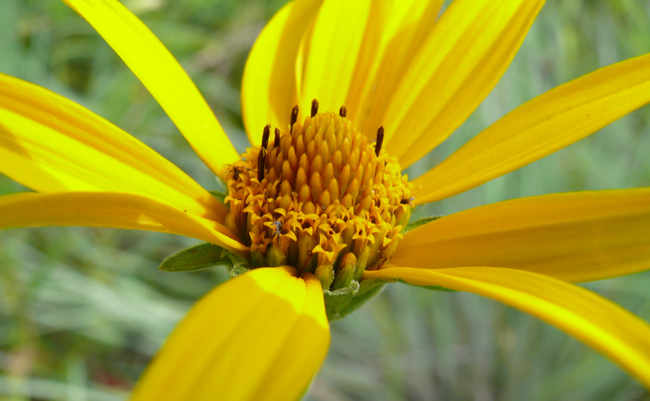 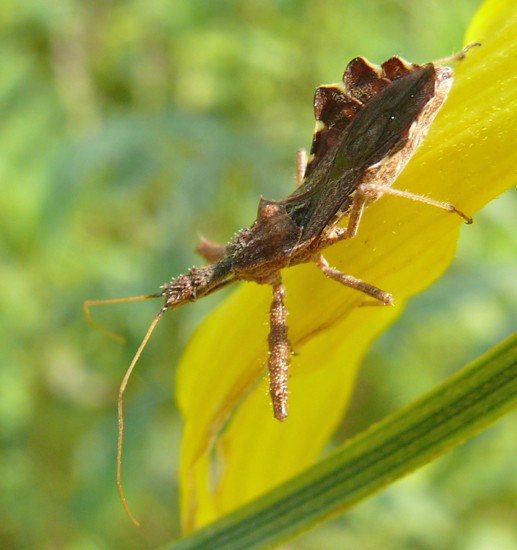 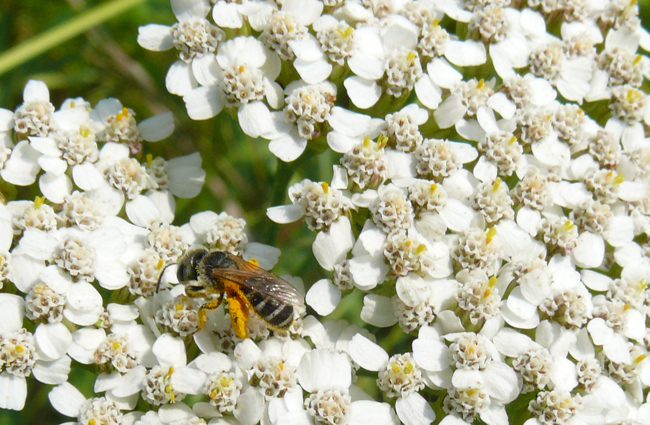 Twice-Stabbed Stinkbugs – a mating pair.  A friend just wrote a nice blog post about these bugs. 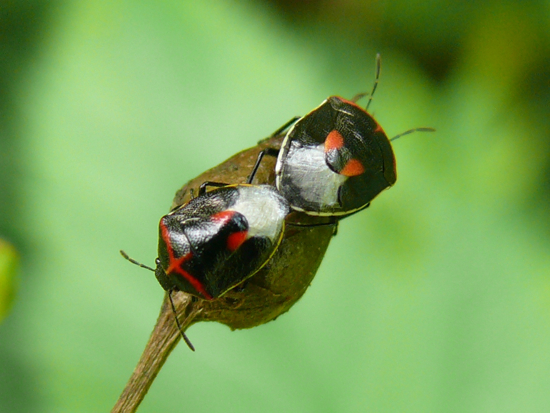 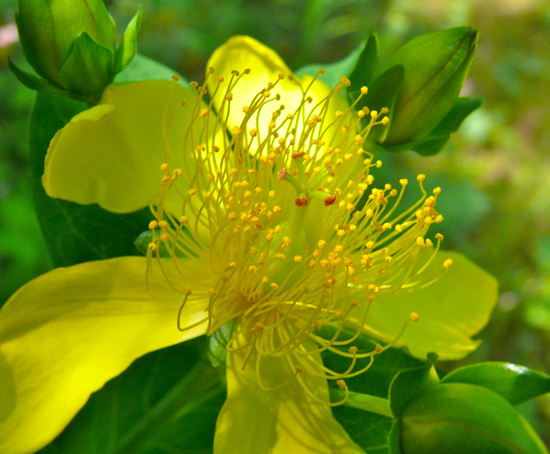 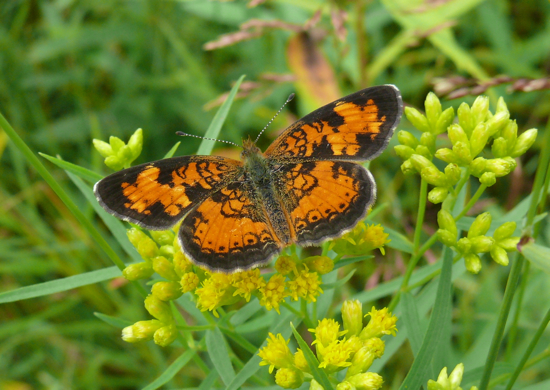 Here are two photos of a spider with her egg sac, and lots of tiny spiders hatching 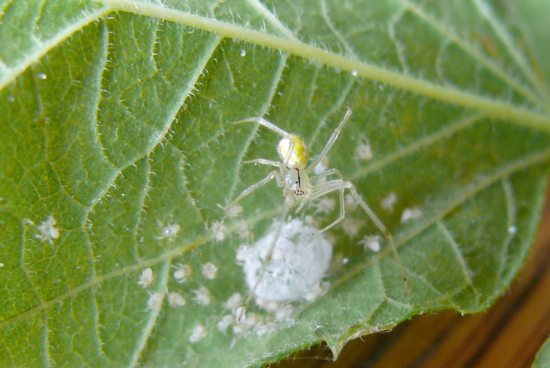 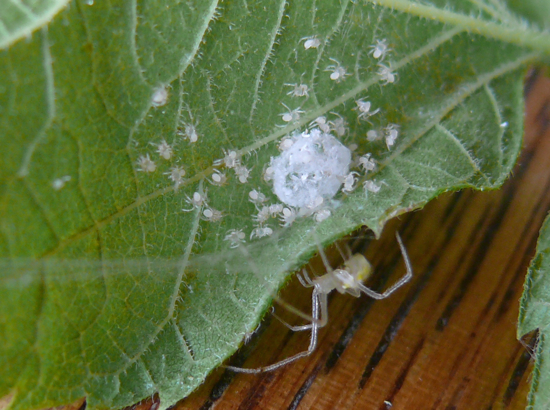 Striped Hairstreak – an uncommon butterfly in our area 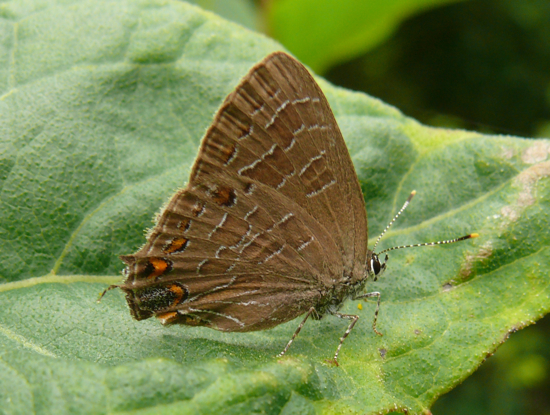 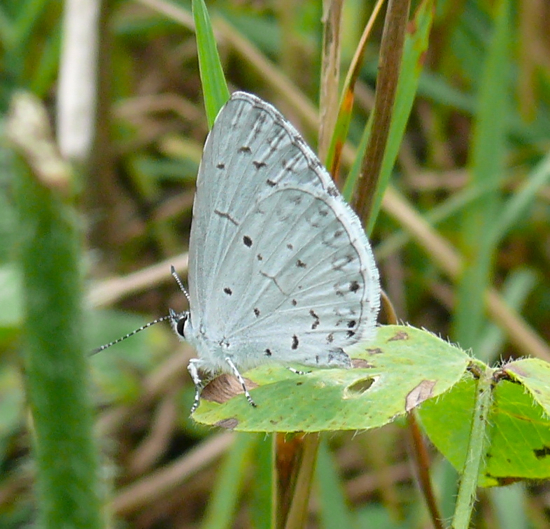 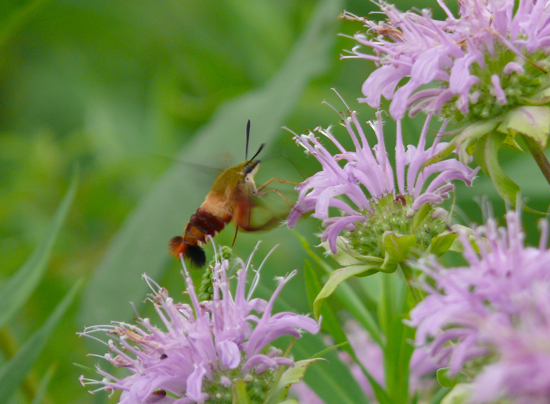 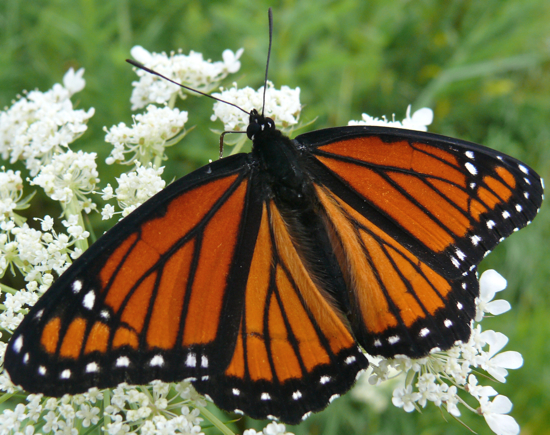 And here are a few more places – I ‘ve been realizing that I need to take more photos of the prairies so I have a record of how they change over time. 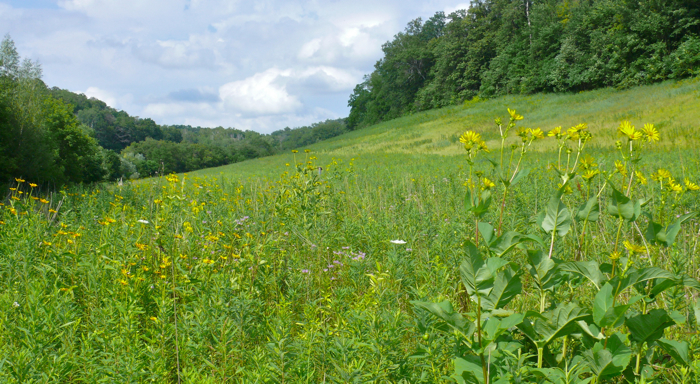 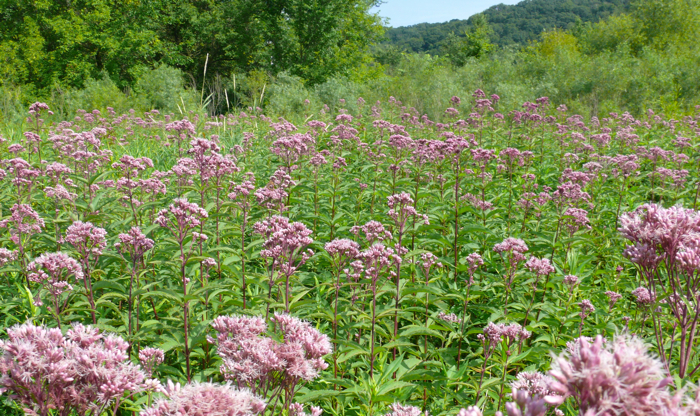 Milkweed Meadow – it’s been mowed a couple of times this summer to control Wild Parsnip. 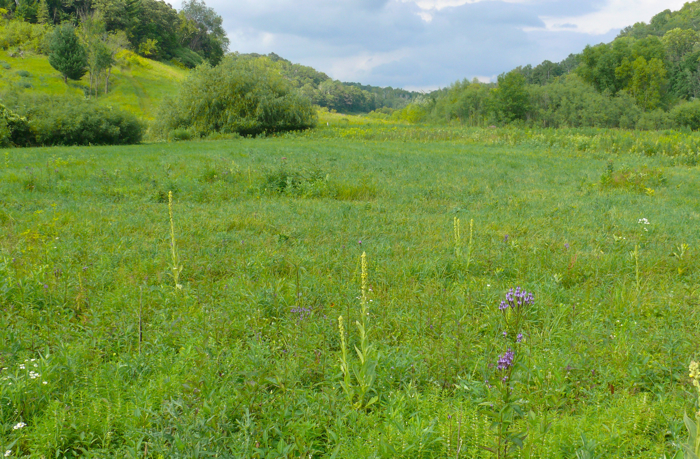 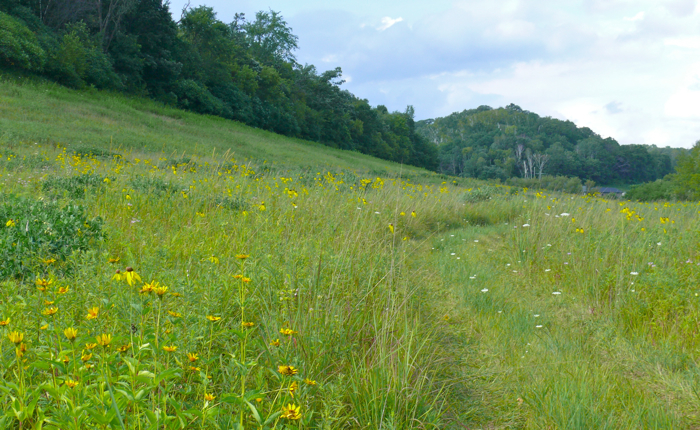 Here’s our house, and the prairie next to it.  This prairie looks much better this year.  We’ve never named it – we’ll have to do that now that it’s looking so good. 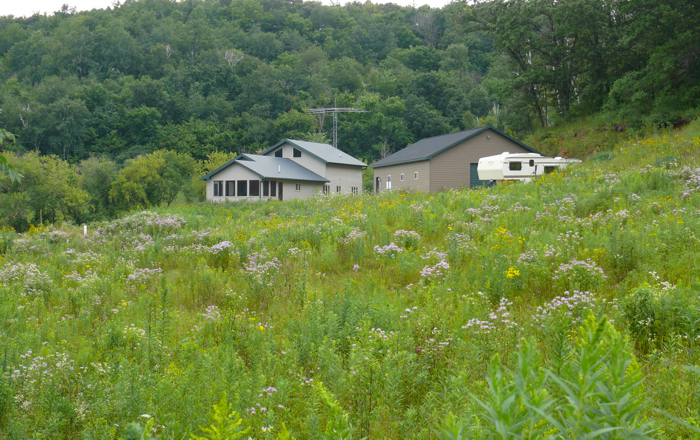