We’ve now had what we hope is the last big snowstorm of the season – 13 inches on March 24th. 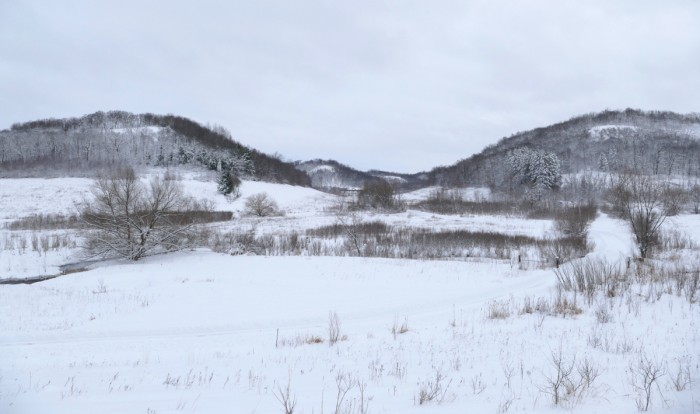 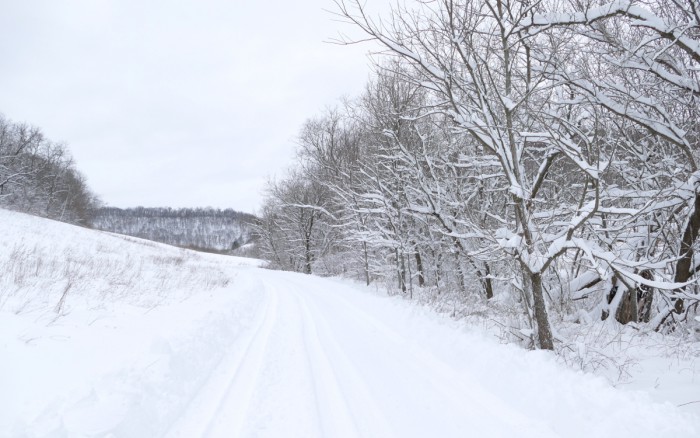 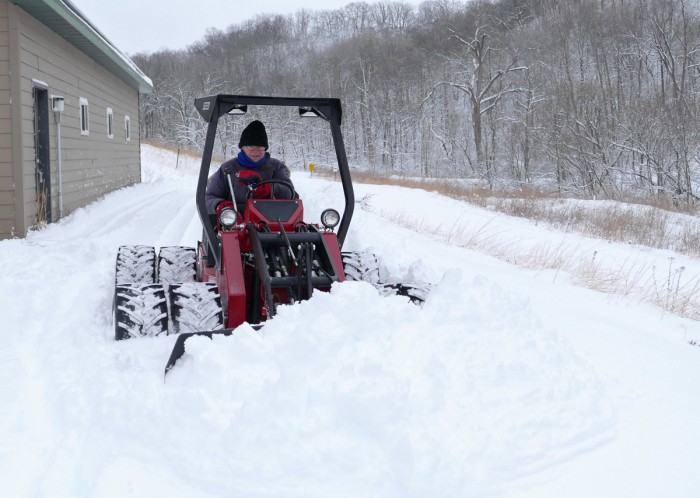 It took almost a week for all that snow to disappear. 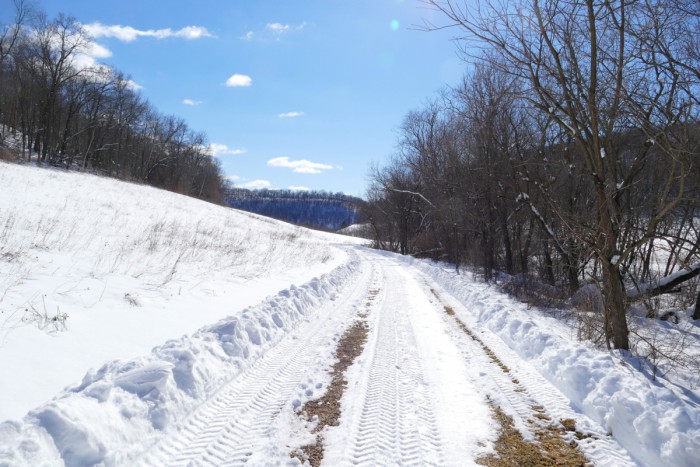 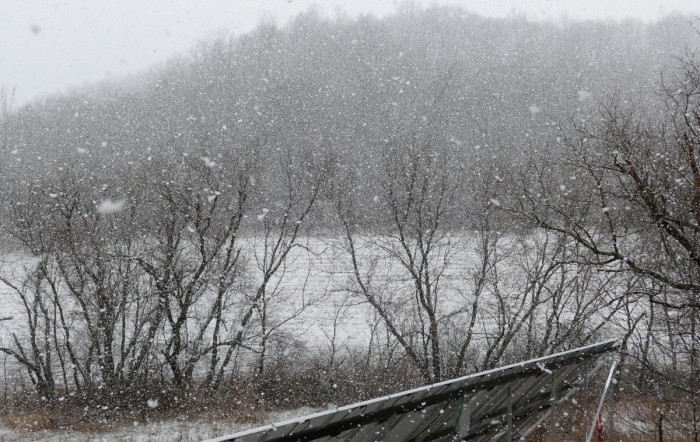 So every few days there’s been more snow to melt. 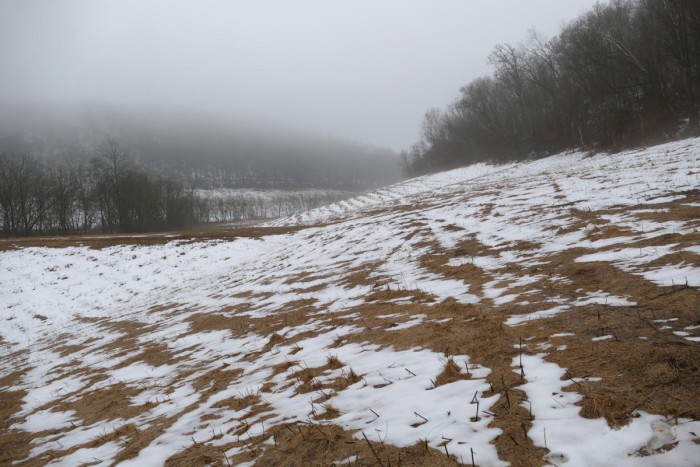 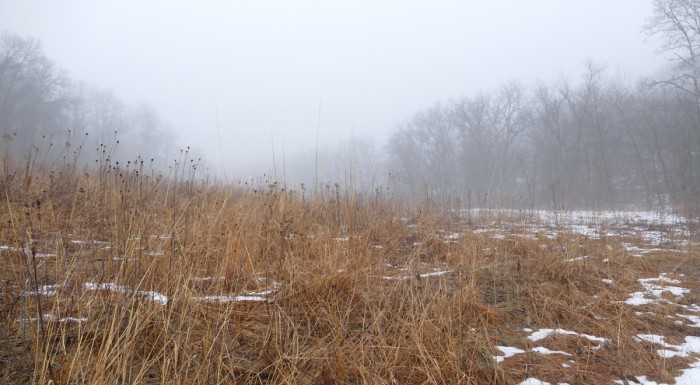 Now finally, the snow is gone.  The weather is still cold and windy, but we’ve managed to work on a few outside projects.

The biggest project has been cutting and piling fallen trees in our savannas, and then hauling the piles away so we can do some spring mowing.  Now that we’ve cleared so many savanna remnants, we have to do a lot more work in the spring.  This is Indian Grass Point, with piles of cut wood. 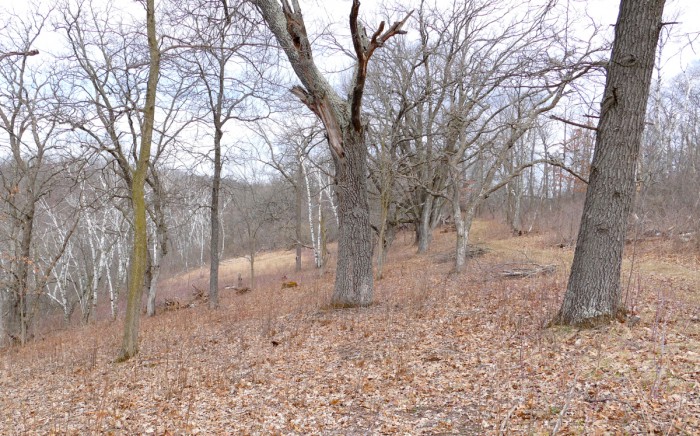 I’m also working on some small hand clearing projects.  This is part of Hidden Oaks Point – at the lower edge of the remnant bluff prairie.  I wanted to clear out the tangle of old sumac, honeysuckle and prickly ash, to open up the prairie that’s growing underneath. 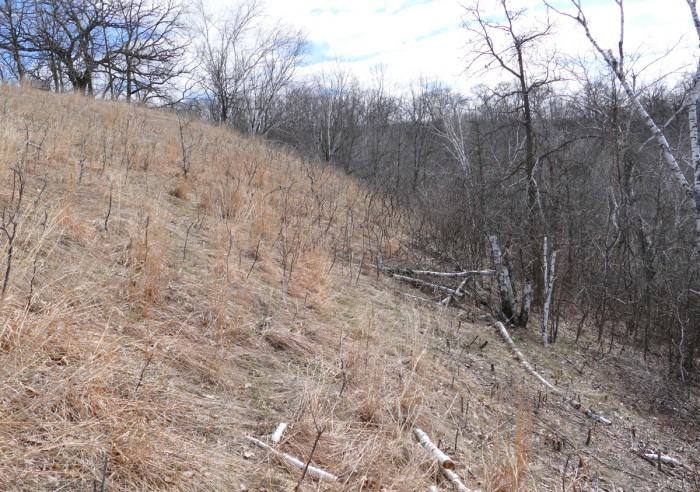 Here’s the ‘after’ photo – a small project, but it’s nice to ‘liberate’ even a small piece of prairie. 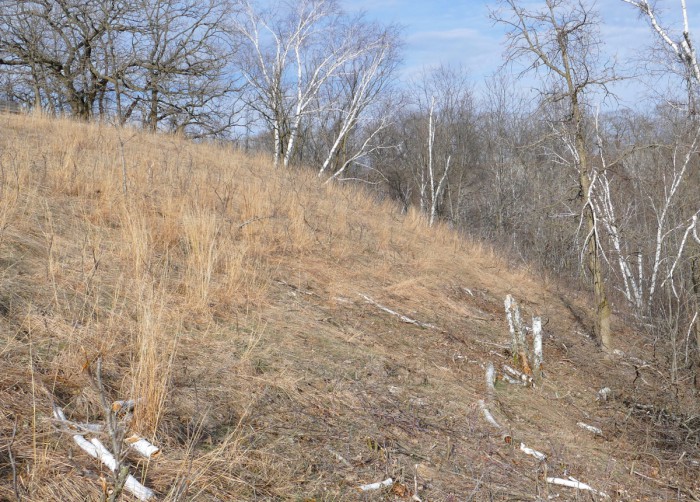 It’s been too cold to see many moths or butterflies.  We’ve seen a few more Eastern Commas, and one Mourning Cloak (no photo).

This is an Eastern Comma. 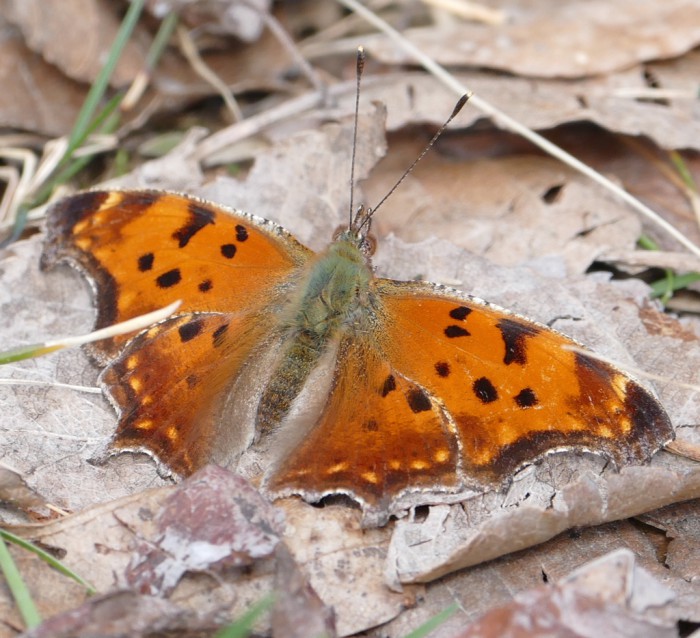 And here’s the ‘comma’ mark under its hindwings. 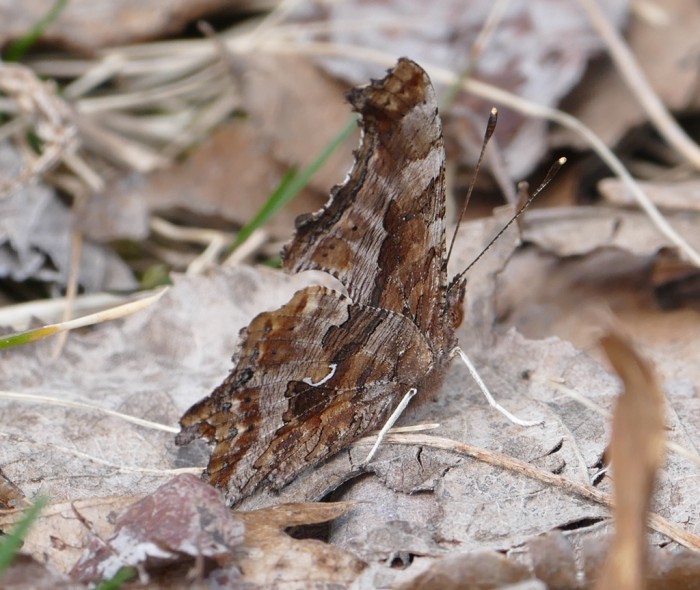 These are Wild Columbine leaves, and the flowers of Pennsylvania Sedge.  The sedge flowers are the only non-tree flowers I’ve seen so far.  I found these in the newly cleared savanna hillside above the house. 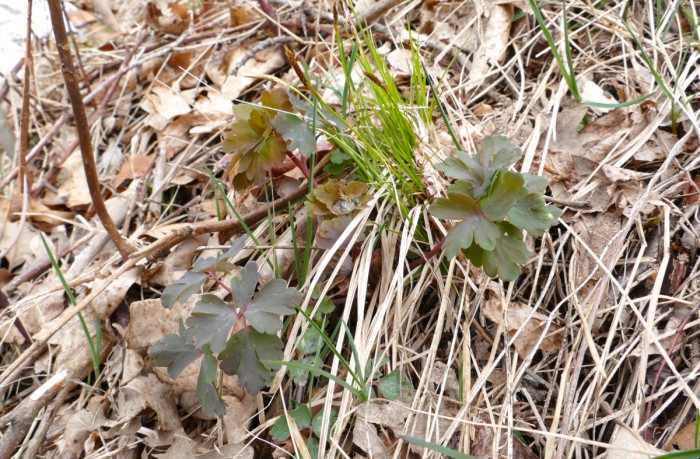 We’ve had several nice animal visitors.  This Woodchuck was sunning itself on the rocks behind the house. 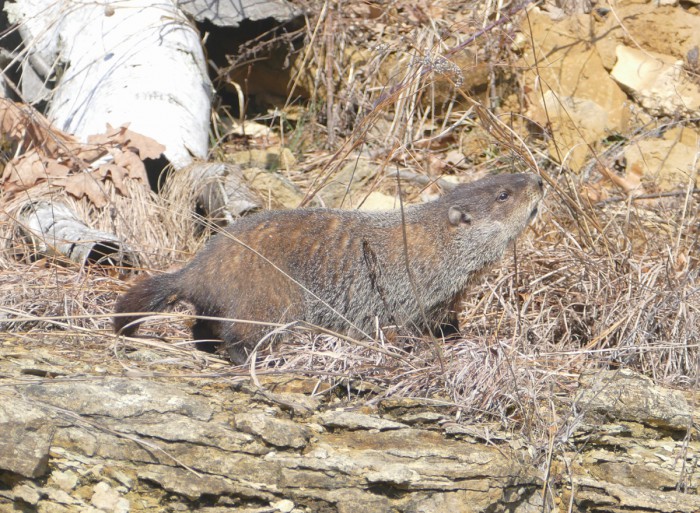 Wild Turkeys  strutting in front of the trail camera 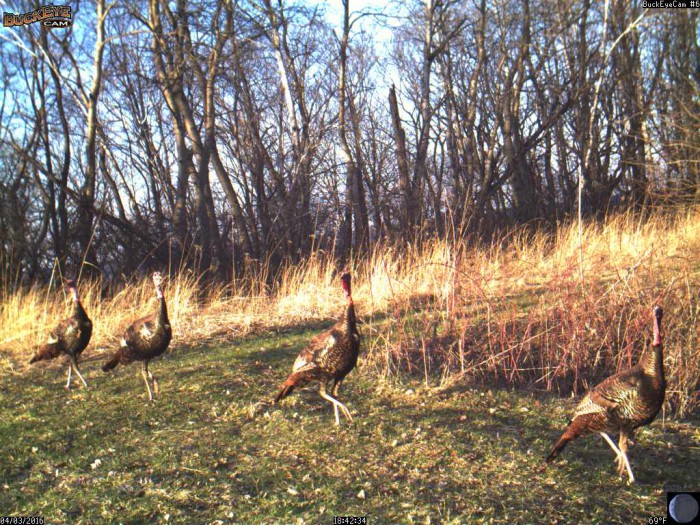 And – best of all – two Sandhill Cranes walked up the driveway one day. 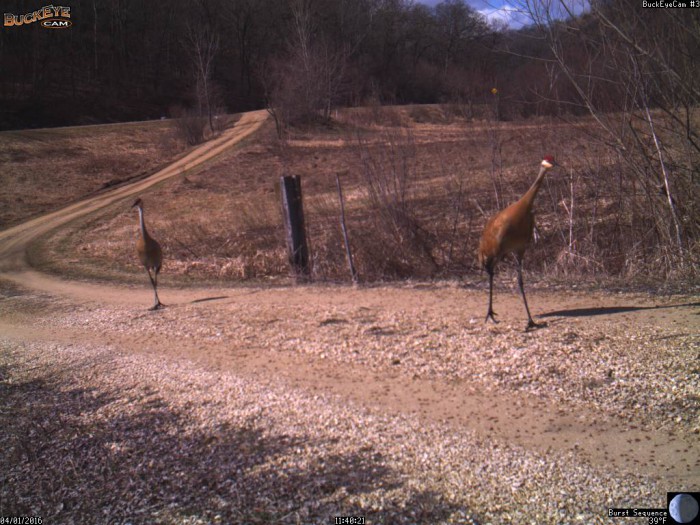 This last photo from the trail cameras is of Cabin Creek – a small stream coming down from the spring that’s near the cabin.   I just moved the camera here, and even though we haven’t seen any exciting animals (yet), I love the scene. 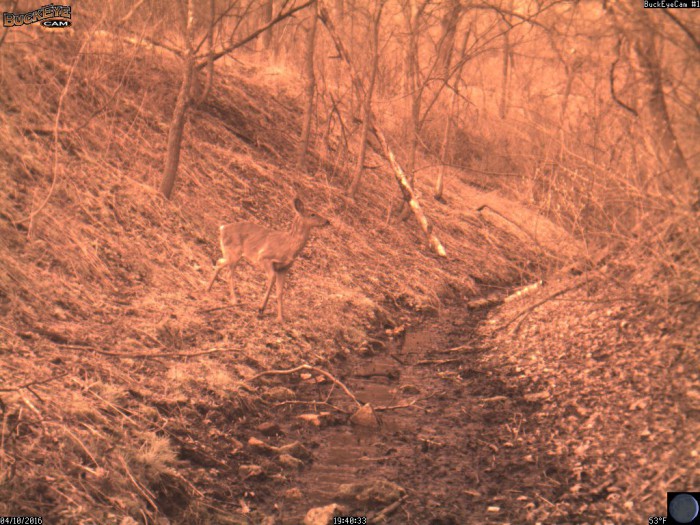 One non-farm discovery is that several of the odd looking moths I photographed in Costa Rica are called ‘Ghost Moths’ – in the family Hepialidae.  This one is probably an undescribed species, and maybe even an undescribed genus. 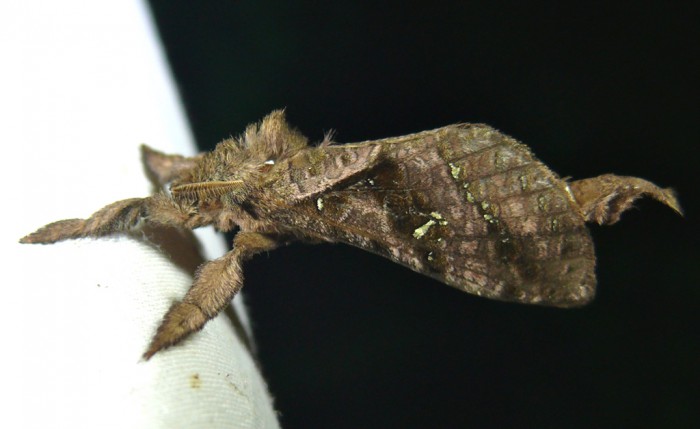 There are several Ghost Moths native to the midwest, and I hope to find them here someday.