We’ve had more visitors, and some very hot weather in the last few weeks.  I think we’re getting to the calmer part of the summer now – quieter and cooler.  We’re starting to work on our cool weather projects.

For those of you who don’t like snakes – there are two snake photos in this post.  I’ll give you advance warning before they show up – watch for it!

Catherine came down to visit, and brought her friend Rebecca, 3 kids and a very cute little dog. 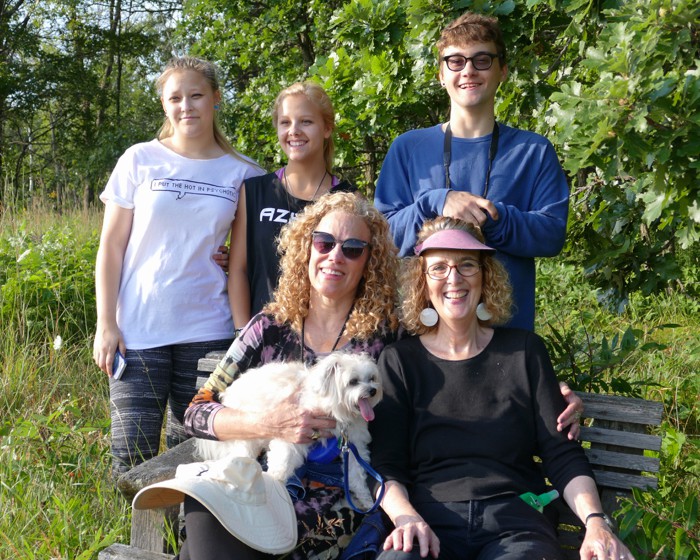 Then Dave Linderud came to do the yearly check for the land trust where we have our conservation easement.   It’s always fun to take him around and show him what has changed since last year.  He has lots of experience doing prairie restorations, so he really understands what we’re doing, and always comes up with a few good ideas to try. 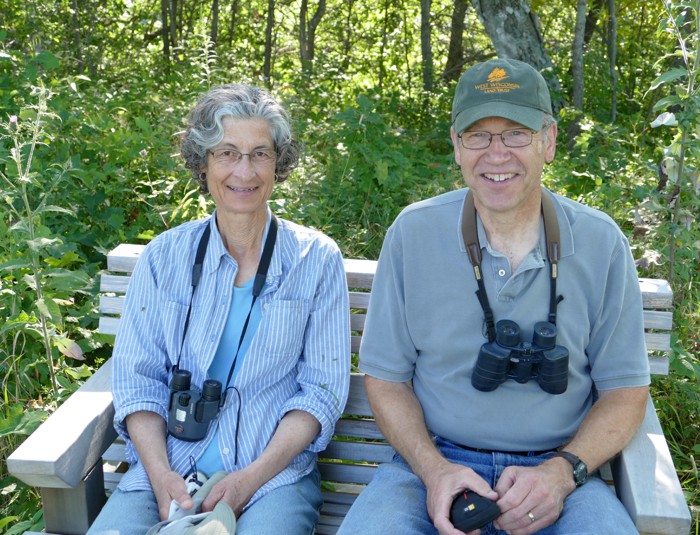 And Marla and Susan came down, hoping to work on a clearing project.  But those were the hottest two days we had, so we ended up just walking.  And even the walks were hot.

Marla, Me, and Susan 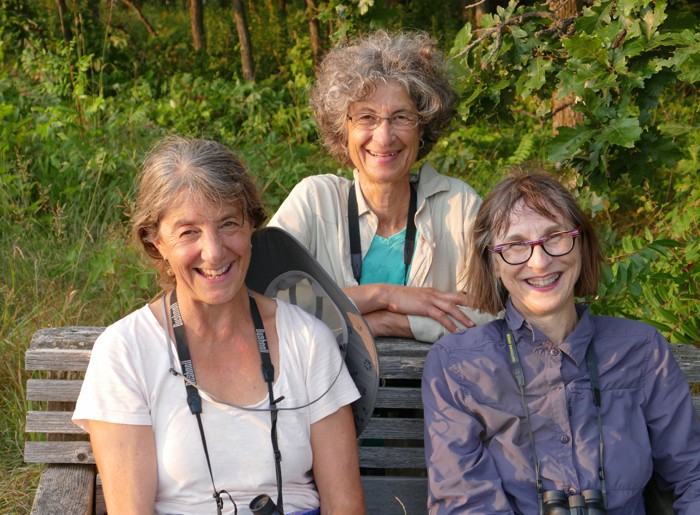 One of the walks was to our new land – Maple Ridge – to check out the clearing Mike and I had done last spring.  It’s still pretty shaded, but we did find one blooming Cylindrical Blazing Star. 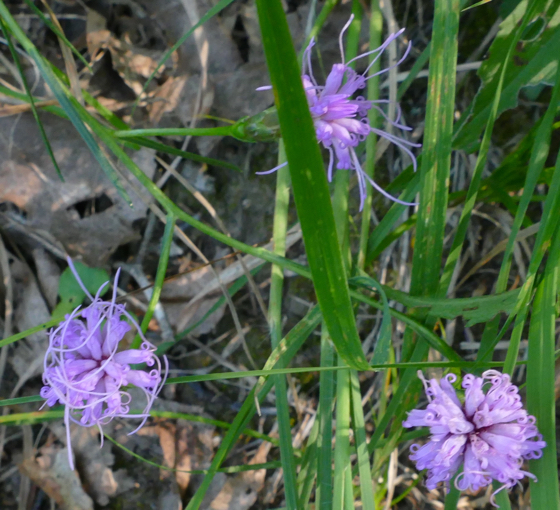 The wetland is spectacular right now – especially Parsnip Meadow.  It used to be all Wild Parsnip.  Now it’s very diverse, with native flowers and almost no parsnip. 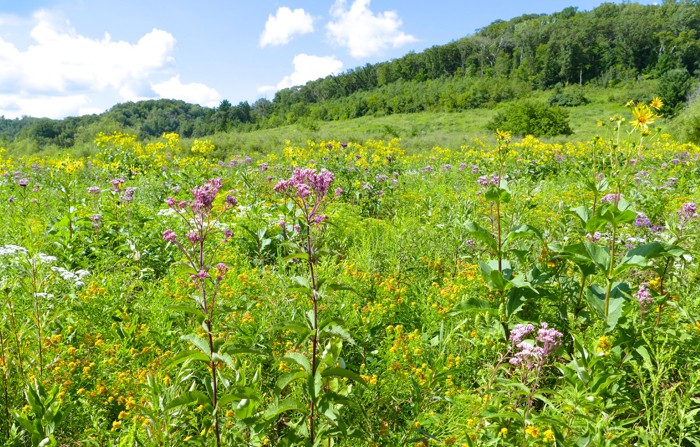 Next are the snake photos.

We’ve been seeing lots of small snakes – mostly garter snakes.  They slide away into the tall plants at the edge of the path as we walk along, so we don’t usually get a good look.   But one day we saw two different species basking on our driveway.

This is a Brown Snake – a small, dull colored snake that’s common on our land.   The largest ones are only about 14 inches long.  This one acted very fierce when I took its picture. 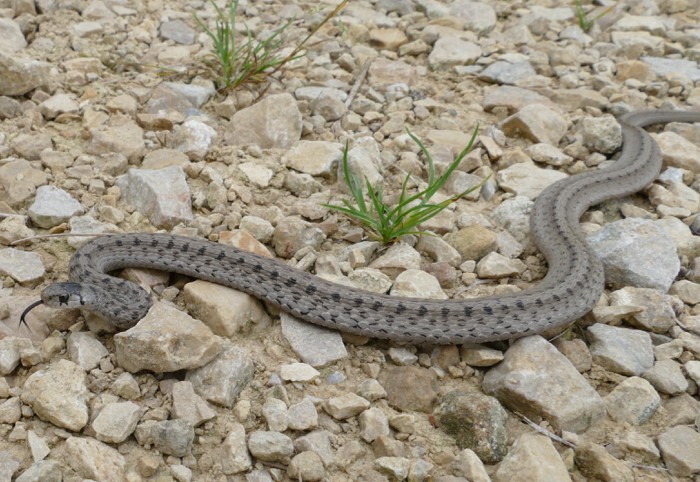 This is a Milk Snake. They’re much less common here – we’ve only seen one once before.  And they’re larger – this one was about 2 1/2 feet long. 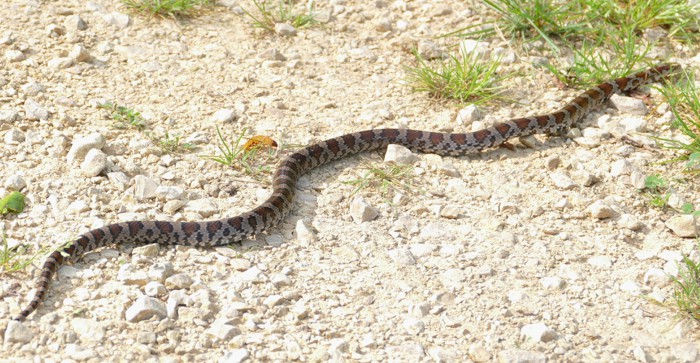 We’ve been seeing bobcats on the trail cameras.  We don’t know if we’re seeing several different animals, or the same one coming back to the same spot.  We saw one (on the camera) leave a pile of scat, then later that night one left another pile, and the next night another.  Bobcats came back to investigate 4 nights in a row.   Since then we haven’t seen one. 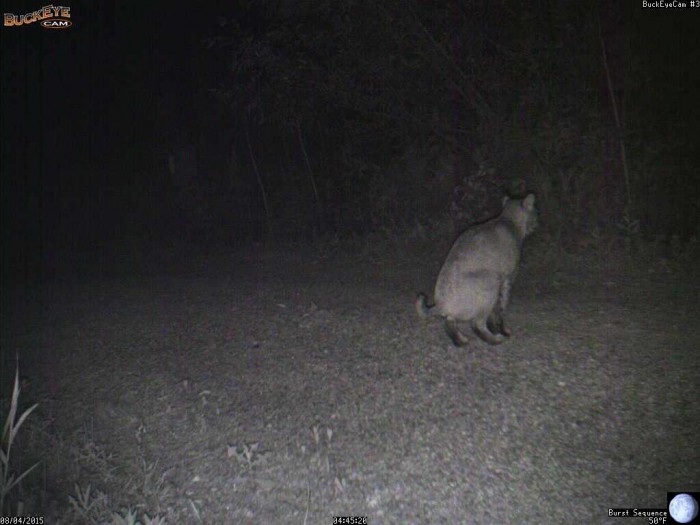 Later that morning, after leaving the second pile of scat 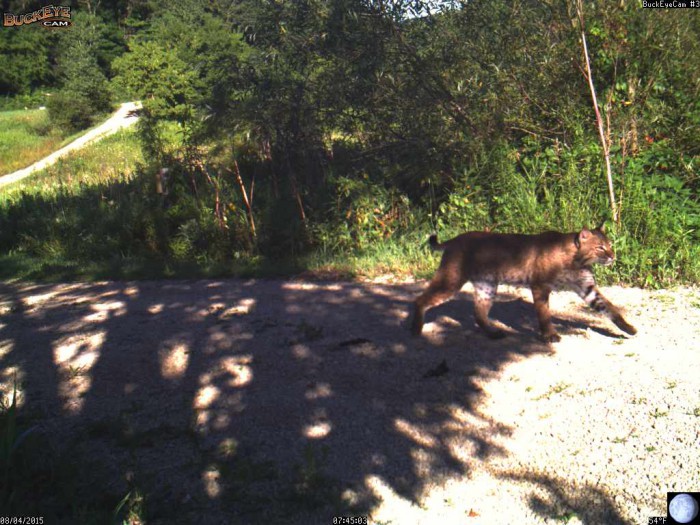 The next night – checking out the scat 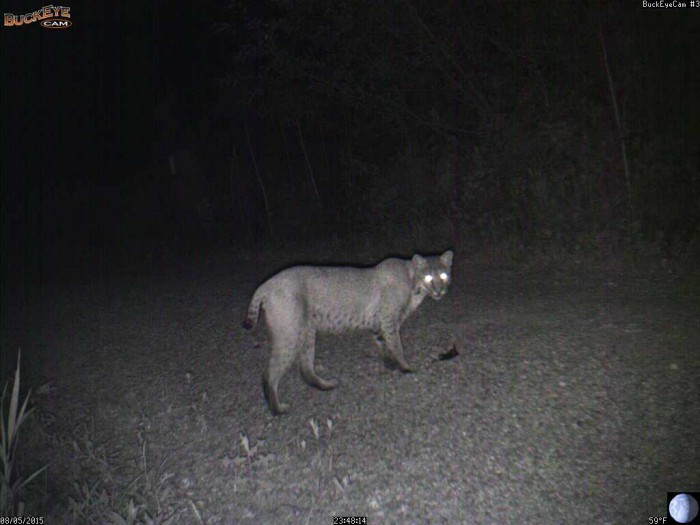 I found my first Baltimore Checkerspot ‘nest’ for this year.  Baltimore Checkerspots are beautiful wetland butterflies – we saw a lot of adults earlier in the summer in the wetland and along the driveway.   Their first year caterpillars build a communal nest of webbing over their food plant – Turtlehead. 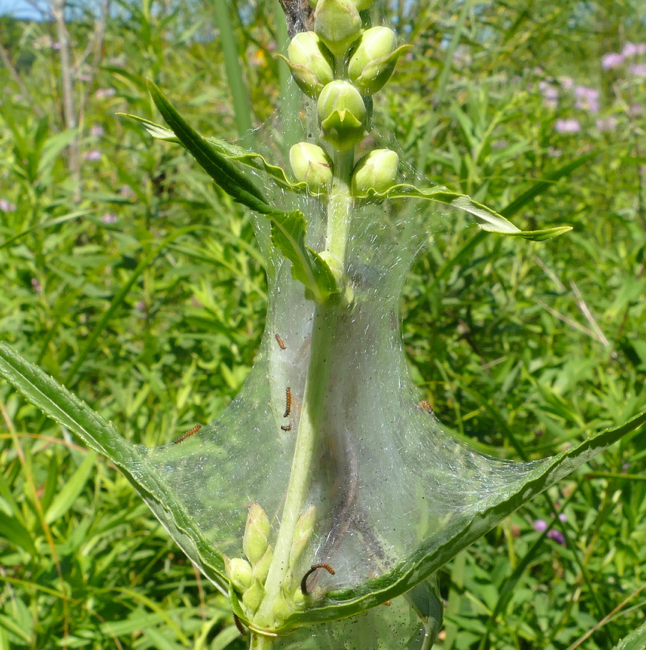 As the next gets older, they extend it down around the stem.

This is from August 16 – now the nest is much longer. 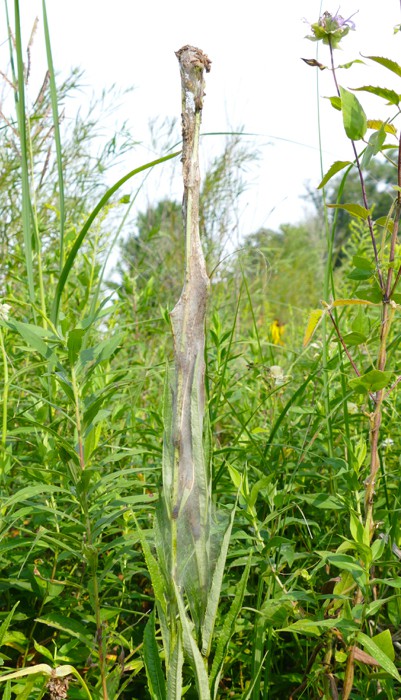 I found a few caterpillars crawling around on the outside of the lowest part of the nest. 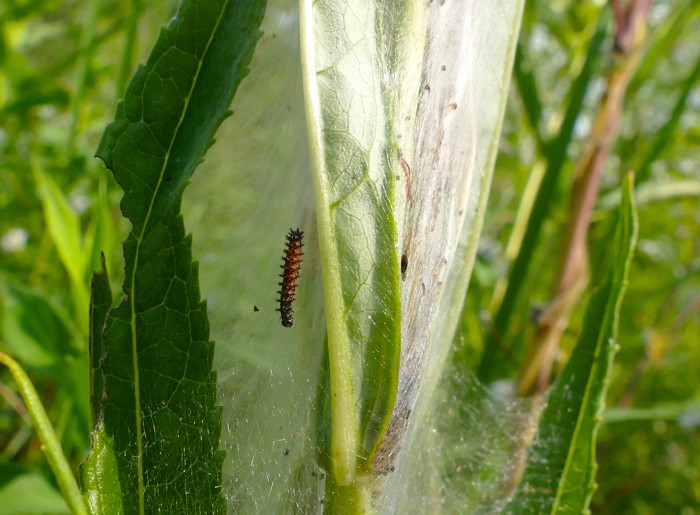 According to David Wagner, the larvae will spend the winter in this nest, and in the spring they’ll spread out and feed independently on a variety of plants – not just Turtlehead.  They’ll pupate in early summer, and we’ll see adults by mid-summer.

Here’s an adult Baltimore Checkerspot from a few years ago. 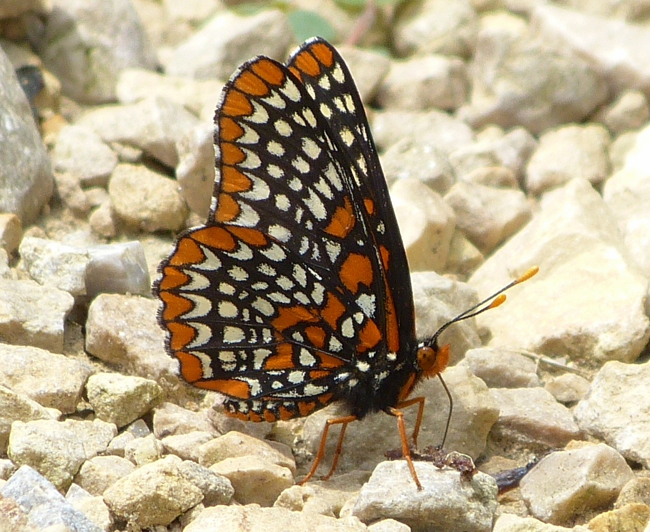 This is a Stick Insect, the Northern Walking Stick.  They’re fairly common but very hard to spot because they’re so well camouflaged.  I saw a few at my moth lights last week, and found a few more on weeds I was cutting. 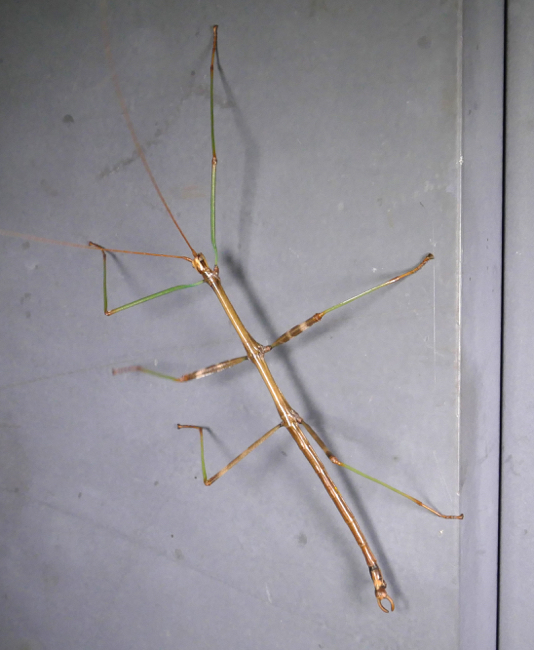 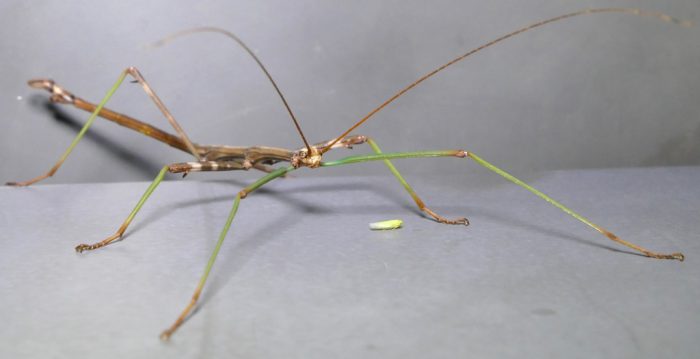 A Splendid Earth Boring Beetle – attracted by my moth lights. 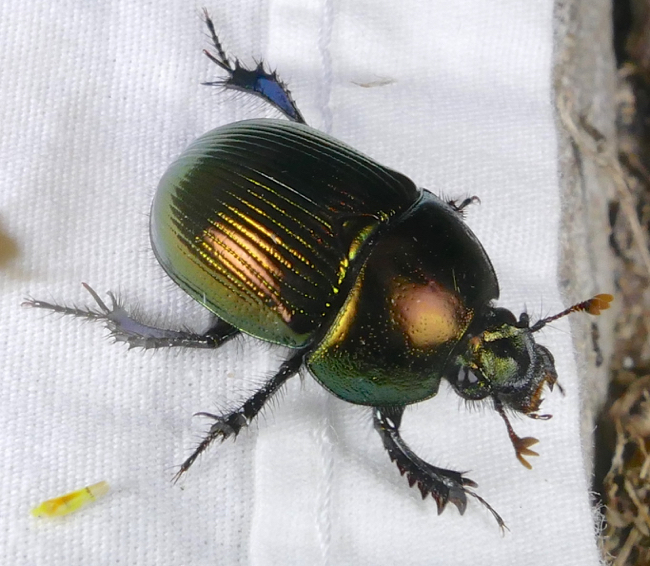 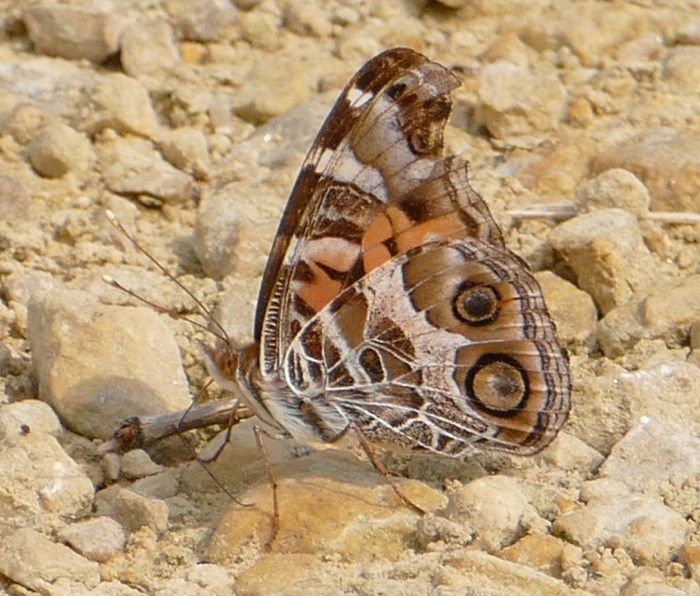 And a Giant Swallowtail on one of our wonderful native thistles – Tall Thistle.

Here are a few end of the summer prairie photos.

Blazing Star and Stiff Goldenrod in the Knife Edge Prairie 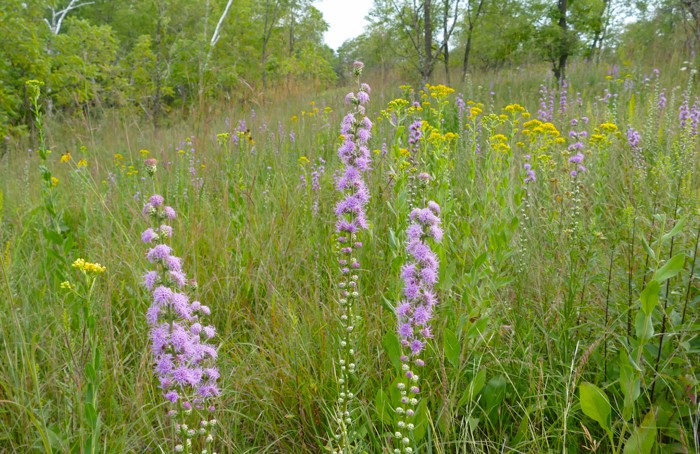 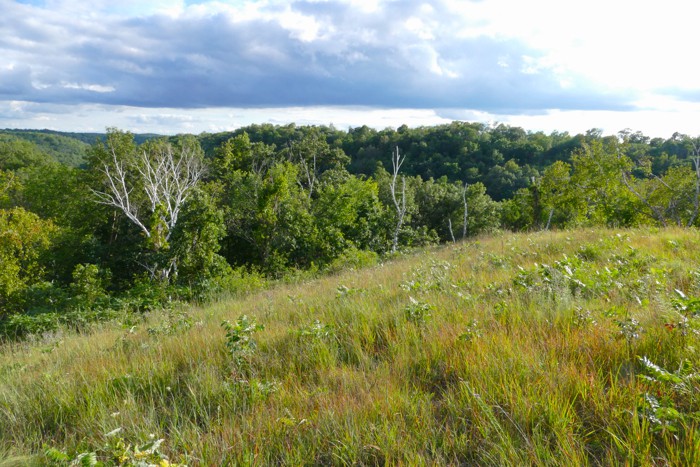 Sunflowers and Stiff Goldenrod in the Cat’s Paw Prairie 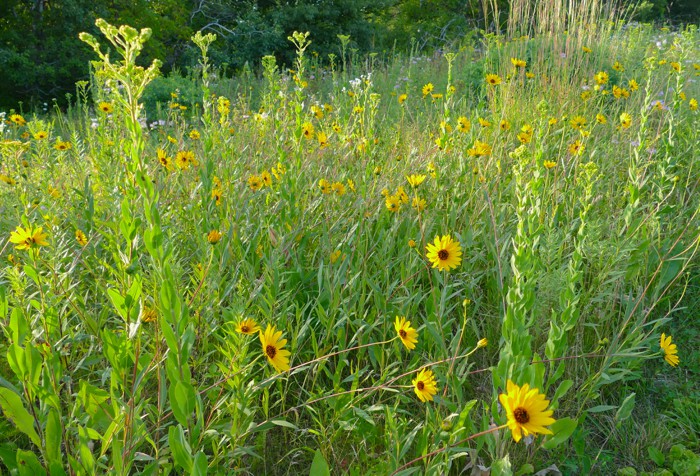 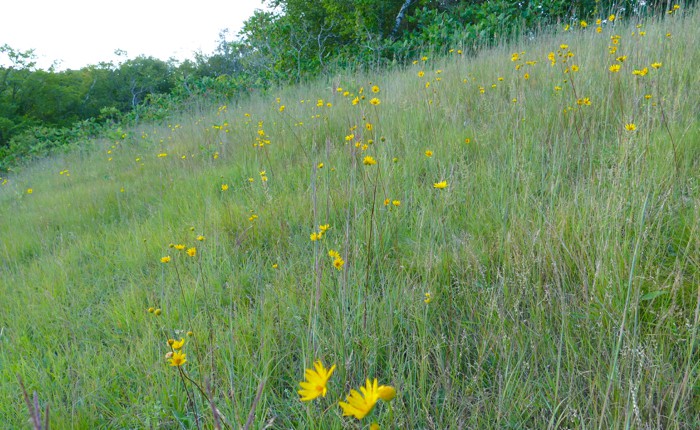 And here’s Mike, giving a talk about drones at Wings Over Alma last week.  There are so many news stories about drones these days that everyone wants to know about them.  Our drone has been in the shop – getting fixed – for the last few months. It’s on its way back now, so we hope to get some fall farm photos for the next blog post. 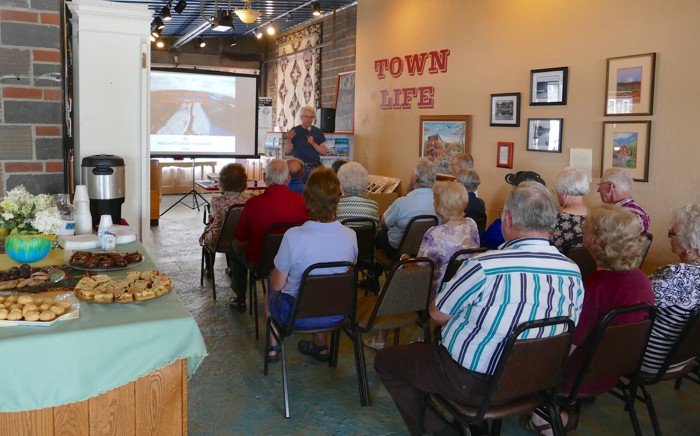