A new kind of bird for the farm list – a Snow Bunting
There were several flocks of them eating foxtail seeds as I was staking the field. The first flock I saw had about 30 birds. They were so well hidden in the grass that I didn’t see them at all until I got too close. Then they all flew up and swooped around me, and back and forth across the field, until I was far enough away that they could settle down again. Later I saw a larger flock of 60 or 70.

I decided to bring the spotting scope up to see if I could get a better look – but they flew so fast that I never had a chance. As I was looking around to see what else I could look at with the scope, I saw a Northern Shrike on the top of one of the small trees in Volvo Meadow – the same place the Shrike liked hanging out last winter. As I watched, the Shrike took off, toward the field, and swooped down towards the flock of buntings. It didn’t catch any, but the Snow Buntings were startled enough to fly completely away.

A Shrike also came flying in to the tree next to our deck, but it didn’t catch anything there either.

We had about 4 Pine Siskins at the feeders this week in addition to all the usual visitors.

Another bird note – the Tundra Swans are at Riecks Lake again – we saw a few last week, and many more this week. Here are some that were swimming on Tell Lake, a small lake east of the Mississippi along Hwy 37 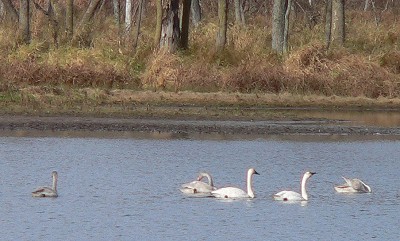