This is the first of the spring flowers – it’s called Common Whitlow Grass, even though it’s a mustard, not a grass.  I usually find it on the sandy slopes of one of our goat prairies – this time it was on Sumac Prairie.  These are annuals, and they’re only about 1 1/2 inches tall. 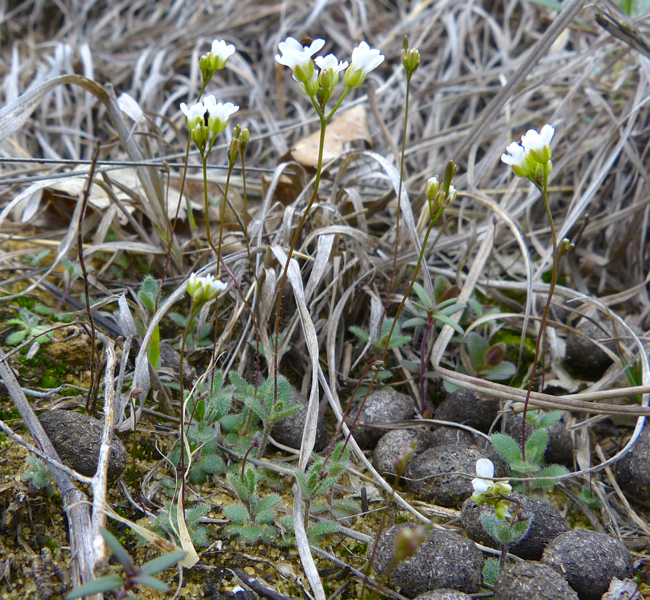 It had tiny native Sweat Bees buzzing around in the flowers.  (Lasioglossum sp.) 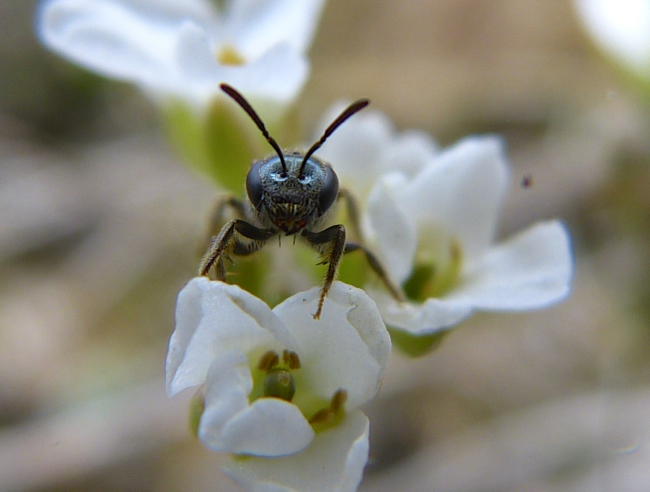 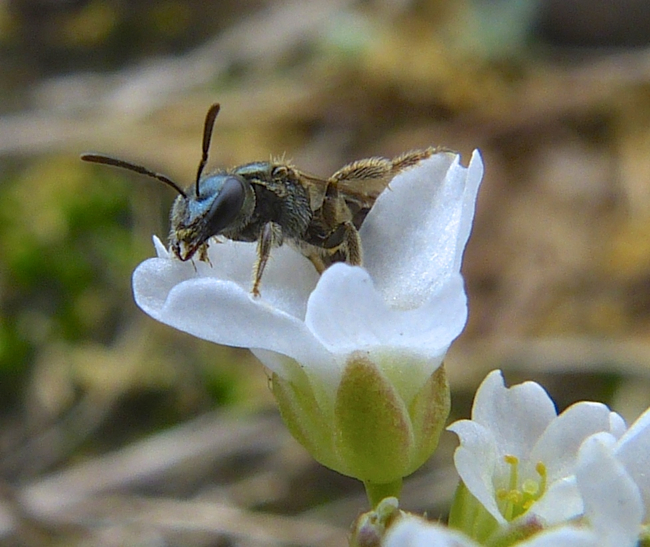 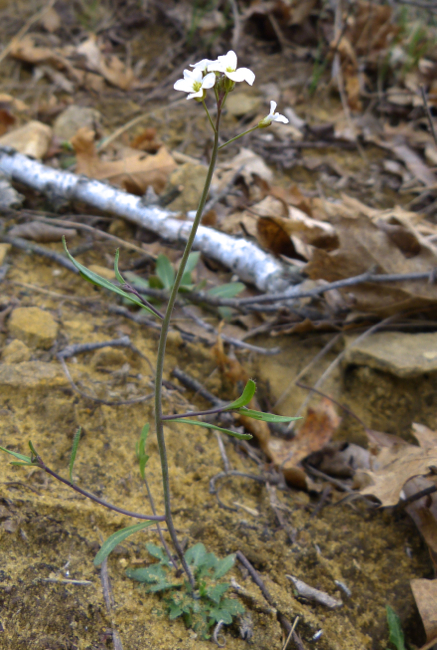 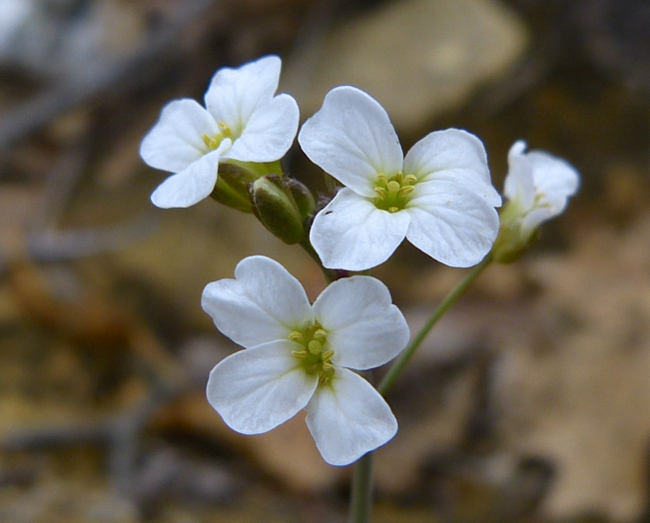 The willows are blooming too, and attracting swarms of tiny bees.  This is a Cuckoo Bee.  Species in this group are nest parasites – they place their eggs in the nests of other bees. 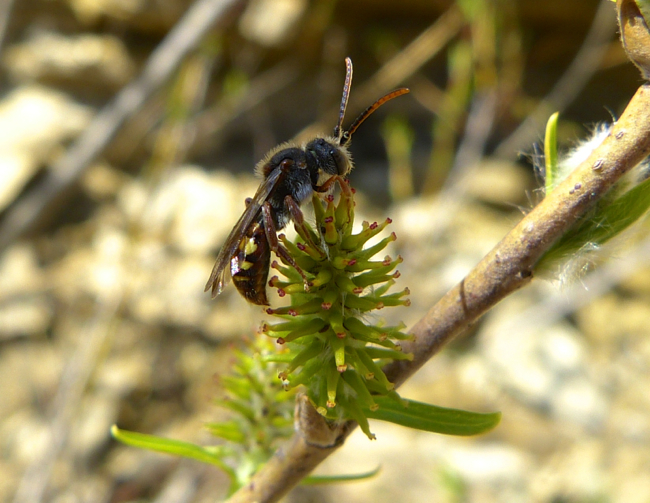 Rue Anemones are just beginning to bloom in the woods. 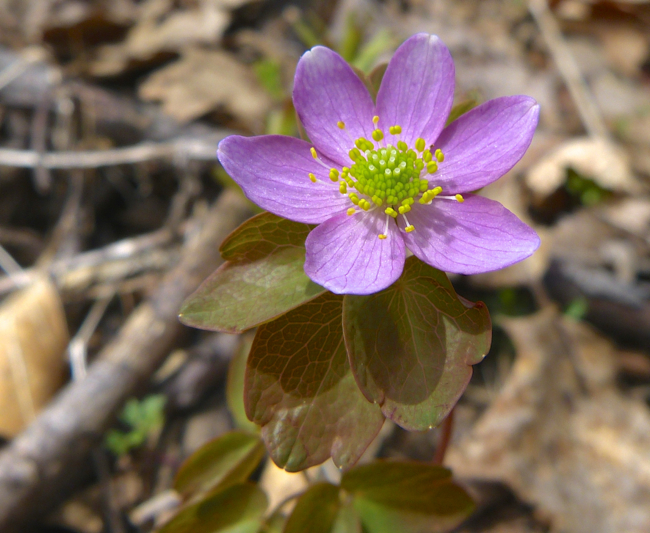 This is Garlic Mustard time for me.  I spend about 3 weeks pulling as many Garlic Mustard plants as I can find.  The number of plants I’m finding is diminishing, but I still find new places where I’ve never seen Garlic Mustard before.  This is one with a lot of first year seedlings – which means that I missed seeing some second year plants last year.  I keep hoping that one year I won’t find any! 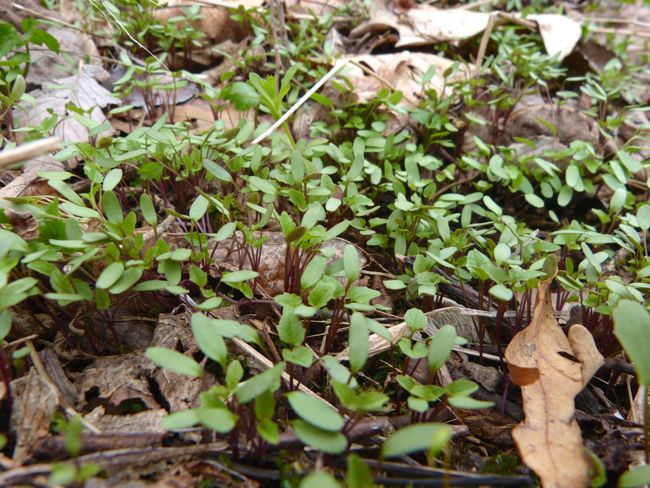 Mike made a new bench and we put it in our (being) restored savanna on Indian Grass Point.   It’s very comfortable to sit on, and the view is great.  It looks very new – very different from the older, weathered benches. 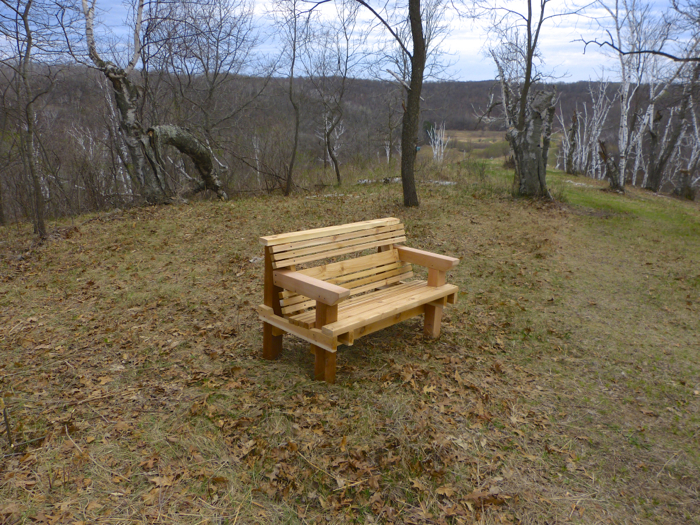 This is the old bench on the Knife Edge Point. 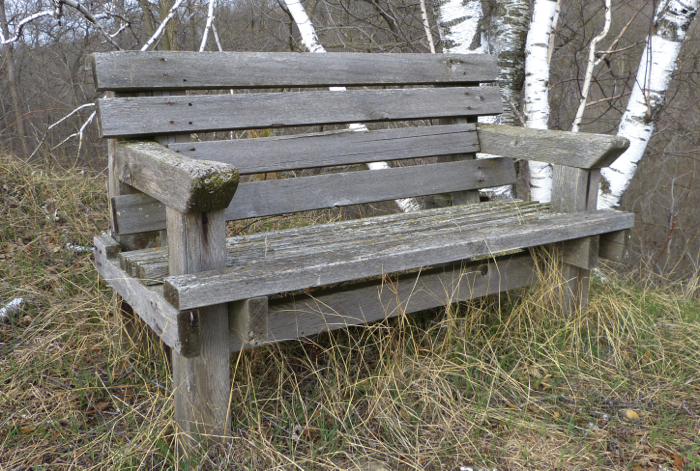 10 years of weathering has turned the wood gray, and lichens are growing on it.

Here’s a Pickerel Frog sitting very still on one of our mowed paths. 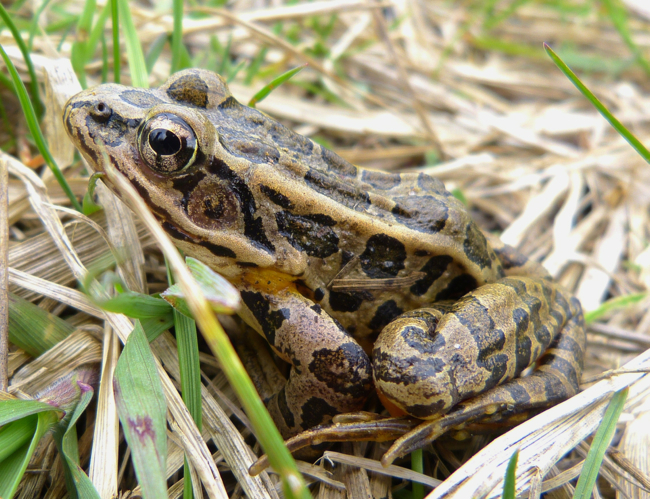 Snake alert – for my friends who don’t like snakes…. 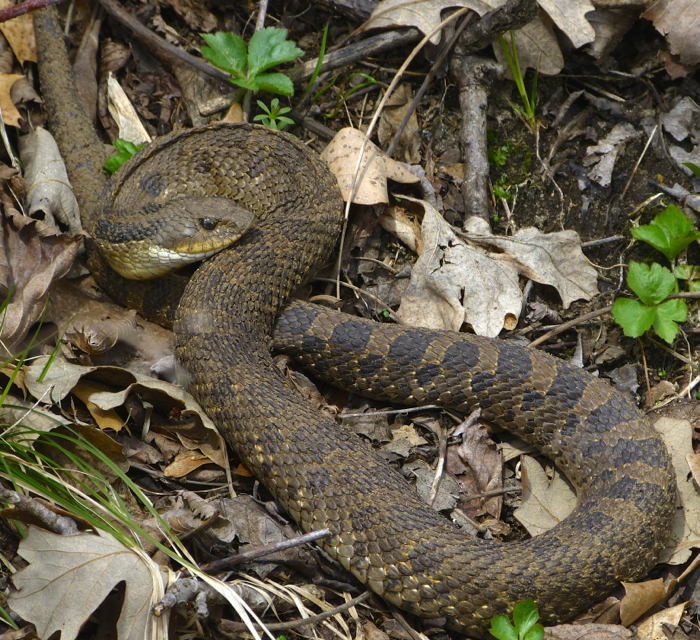 Brown Snake – a very small, slender snake that we see here often, especially in the spring 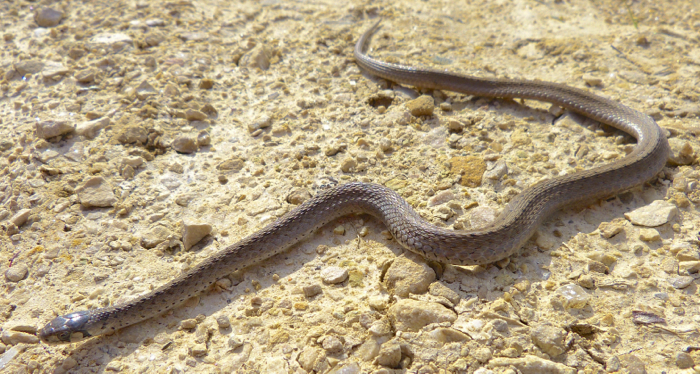 This is a millipede that I found when I was pulling Garlic Mustard in the woods.   Most millipedes I’d seen before were drab and dull looking – I never knew there were bright colored ones. 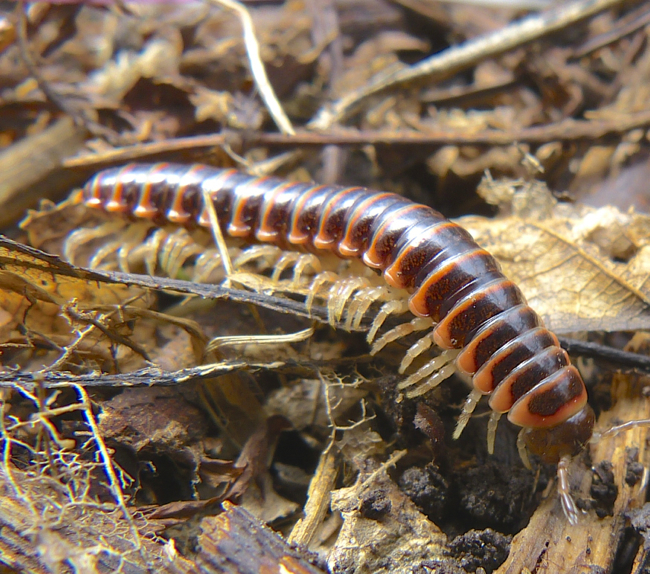 Here’s a beautiful marked Syrphid Fly.  Syrphid flies are often called Flower Flies because the adults feed on nectar or pollen, and often look and act like bees. 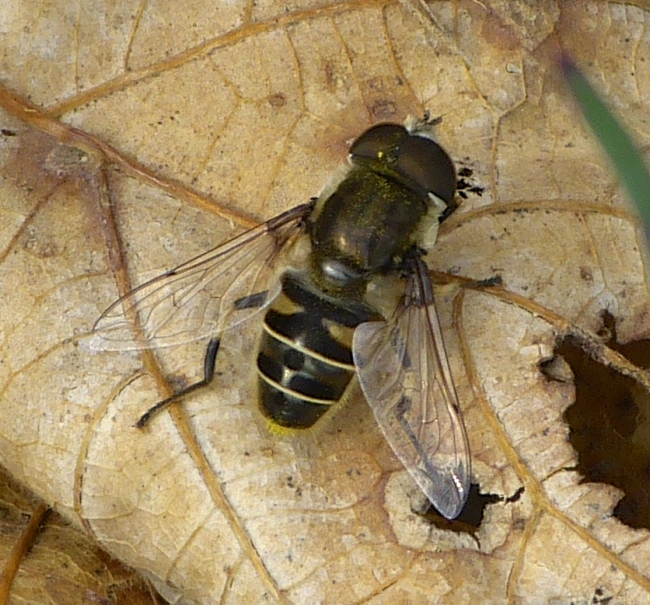 This is a very odd fungus.  It’s a bit larger than a baseball, and feels and looks rubbery.  I think it’s a jelly fungus called White Coral Jelly.  It’s white when it’s fresh, but turns brown as it ages.  There were at least 8 of these in the woods below Hidden Oaks Prairie.  I’ll check later this year to see if I can find any fresh ones – they should be prettier. 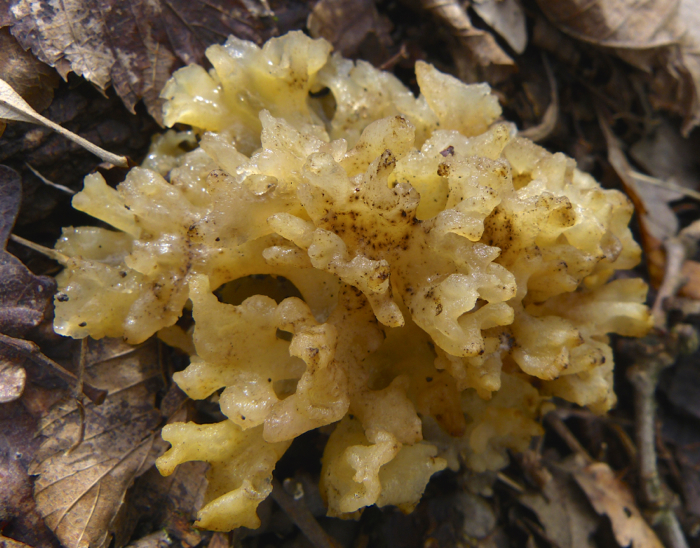 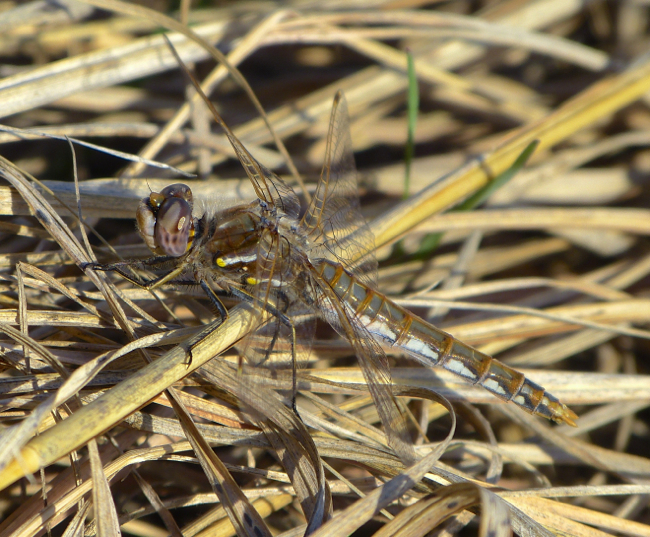 This is an interesting lichen that I found growing on a dead branch.  I don’t know anything about it – I’d love to know its name. 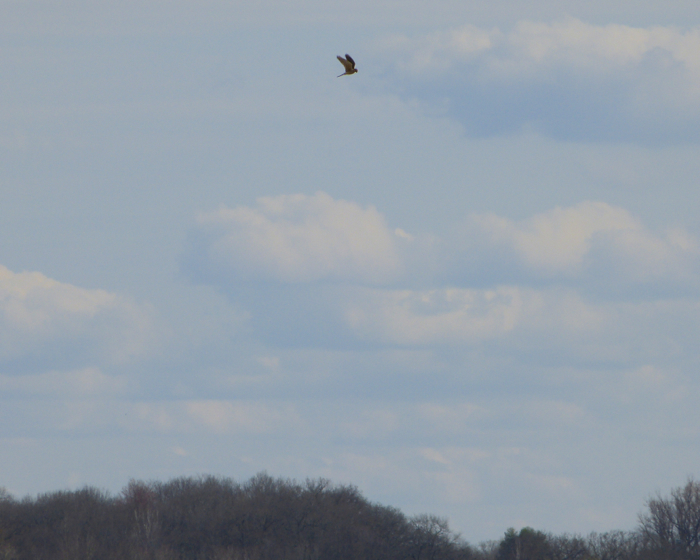 My weekly bird list has a lot of FOYs this week (in birder terminology, FOY means ‘first of the year’).  A lot of the migrants that spend their winters in the tropics have returned – Baltimore and Orchard Orioles, Ruby-throated Hummingbirds, Rose-breasted Grosbeaks and Indigo Buntings all arrived this week.  I feel like we’re living in a tropical forest.  Here are some of the orioles and a grosbeak in a tree – waiting for a turn on the feeders. 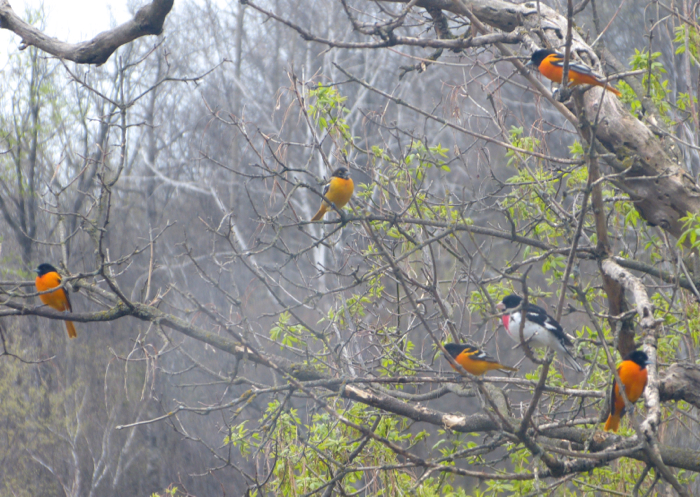 The view from Big View Prairie…the landscape is turning green. 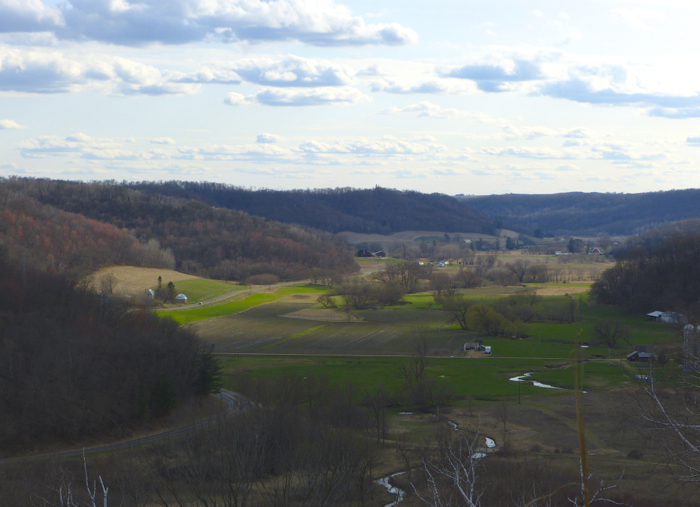 And mothing season has really begun!   I’ve been putting up my lights most nights, and attracting some nice moths.  Here are a few of my favorites. 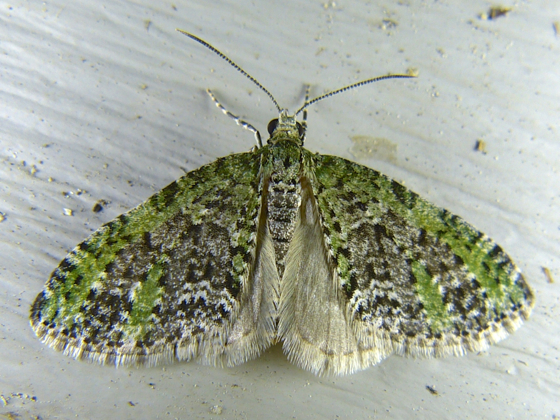 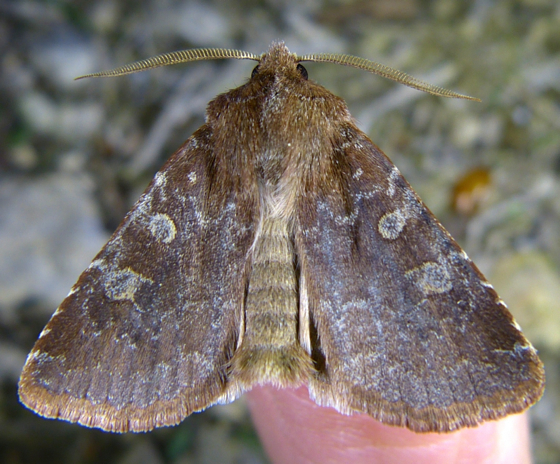 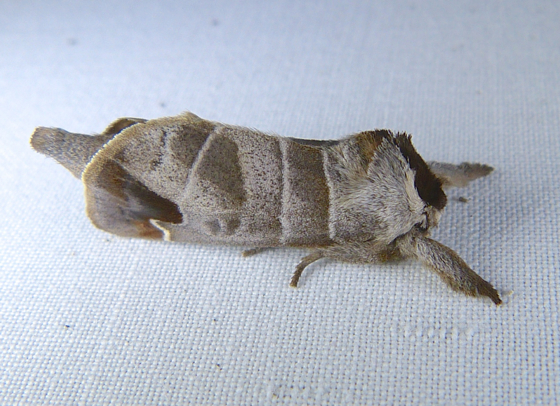 Another view of a Sigmoid Prominent 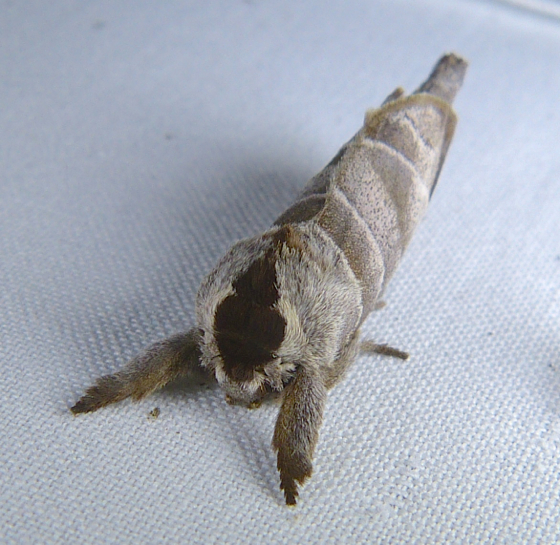 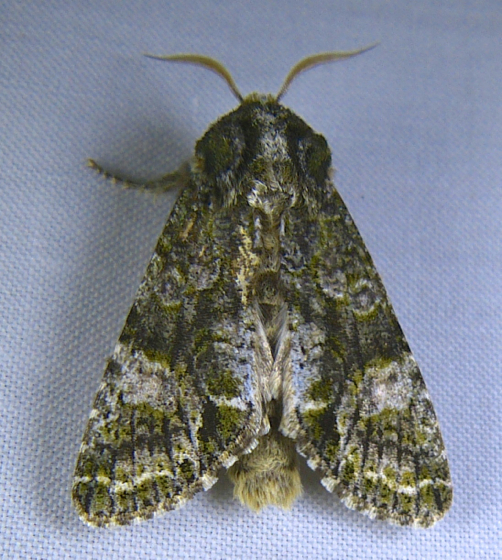 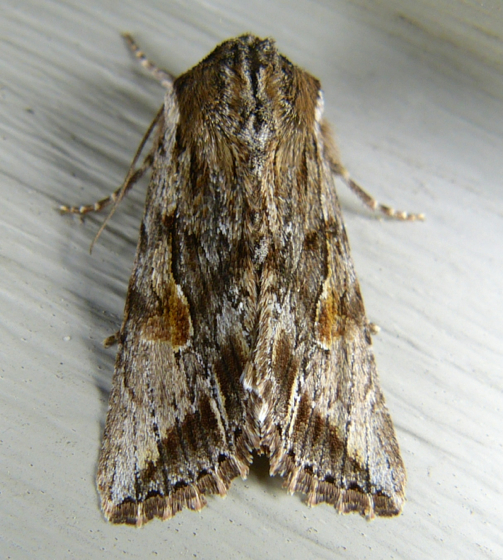