There are still flowers blooming, but not many, and every day there are fewer of them.  A lot of the fall flowers are blue-purple. 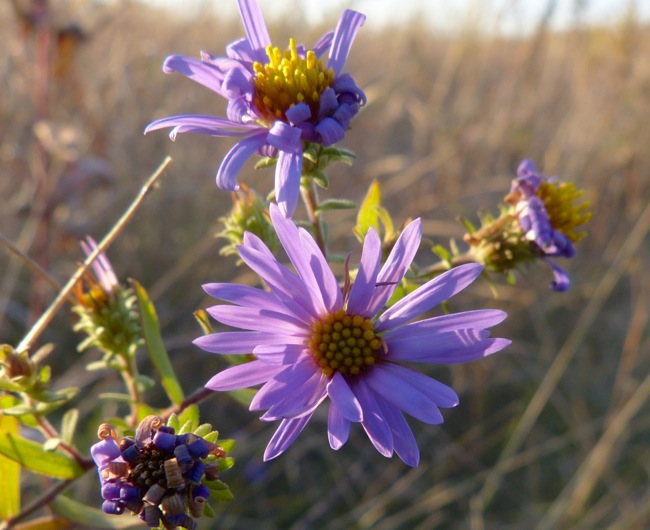 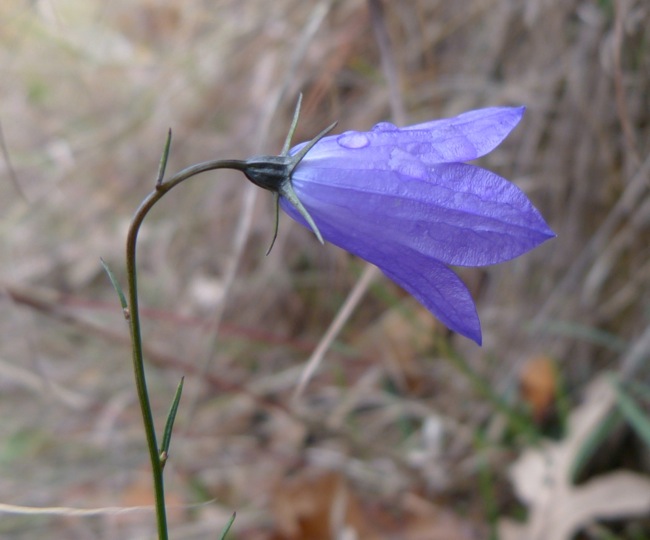 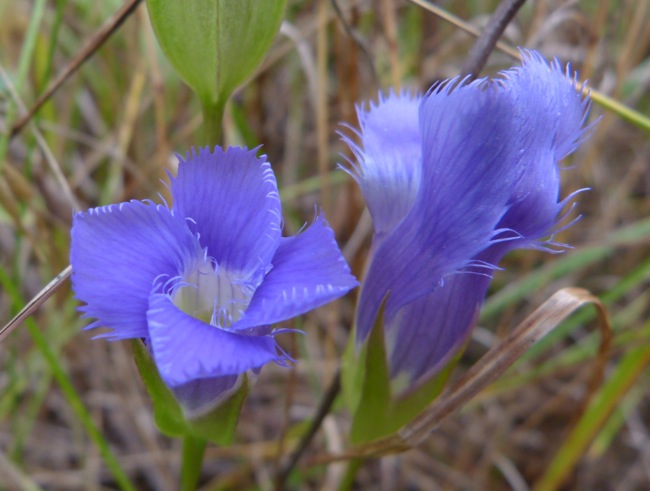 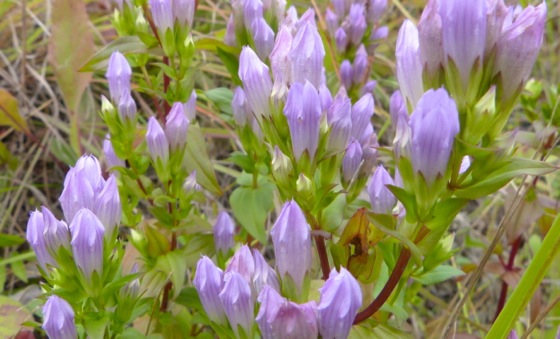 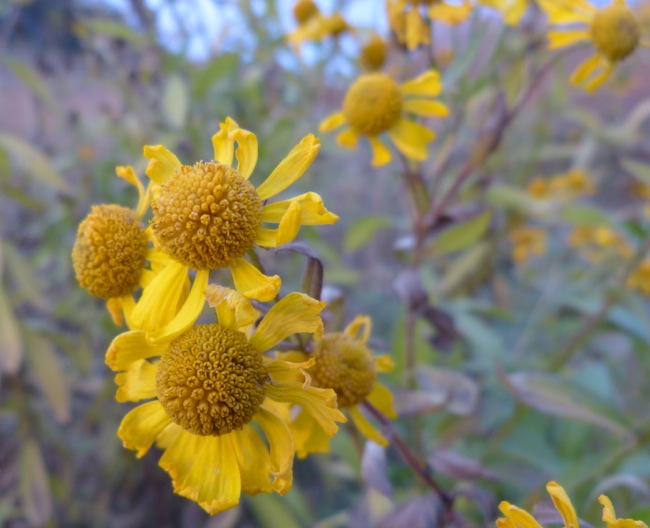 I drove down to Madison a few weeks ago, to participate in a symposium at the 5th World Conference on Ecological Restoration.  One of the organizers, Nancy Aten, got some landowners together to talk about the restorations we’re each working on.  It was great fun to meet the other landowners and compare notes – we had heard about each other but had never met in person before. 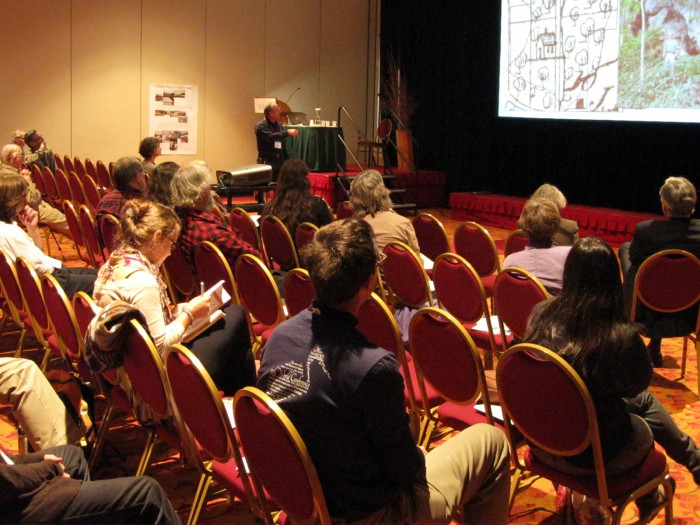 We were originally brought together by Rollie Henkes, who publishes Woodlands and Prairies magazine which highlights the work of landowner restorationists.  Rollie gave an introduction, and then we each gave a 10 minute talk about our own projects.

Sibylla Brown talked about her savanna restoration in Decatur County, Iowa.  She and her husband Bill manage their land with timber stand improvement – where invasives and less desirable trees are removed; and dormant season fire – they burn the entire property every year.  They’ve  been able to bring back many native plants without planting any seeds, and have watched the return of many savanna bird species and unusual fungi.  She writes a blog about her experiences and discoveries. 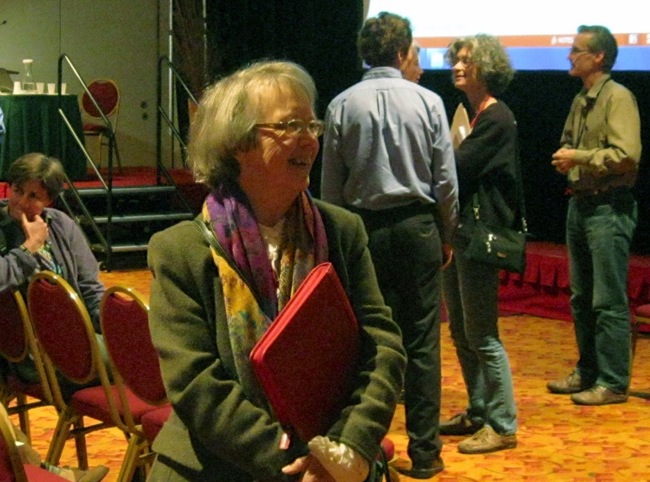 David Gossman talked about the restoration of his land in the southern part of the driftless area – in Jackson County, Iowa.  He’s combining farming and logging with ecological restoration in a way that protects ecologically sensitive areas, and restores more diversity to the land. 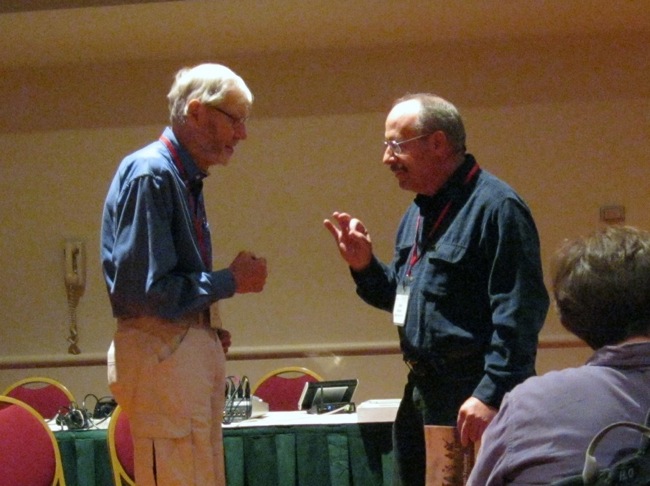 Dan Collins, along with his wife Nancy Aten, are restoring their land in Door County, Wisconsin.  They’ve joined a land trust community, and the members work together and help each other on their projects.  This results in a more regional view of restoration and landscape management. 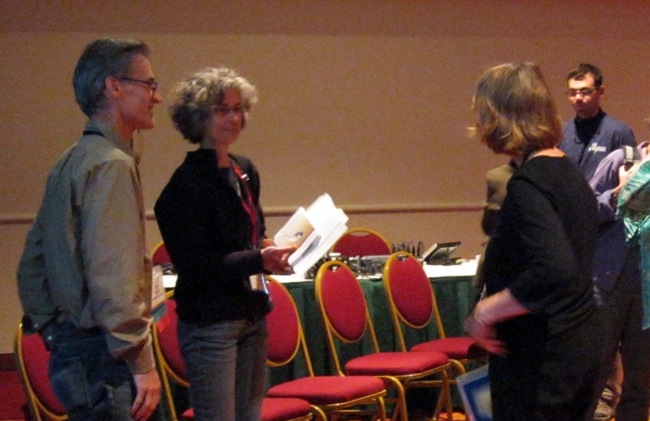 Back here at the farm, Mike and I have been doing a fun, and very energetic, clearing project on Indian Grass Point.  The front of Indian Grass Point is a remnant dry prairie.  Behind that, on the ridge of the point, was – when we first arrived – small aspens and thick brush with scattered big, old oaks.  (Sibylla Brown says that these large, open grown trees are called ‘wolf trees’.)  Since about 2003 we’ve been clearing under the trees, and trying to get rid of the invasives.   I girdled the aspens in 2005.  As the trees died they’ve provided food for woodpeckers, but now they’ve mostly fallen, and make it almost impossible to walk through the brush.

So, this week, we decided to see if we could clear the brush and fallen trees, and to liberate a few of the big old oaks.

Here’s a view of the newly girdled aspens in 2005.  At that point, there wasn’t much brush – I think the ground under all those aspens was too shady. 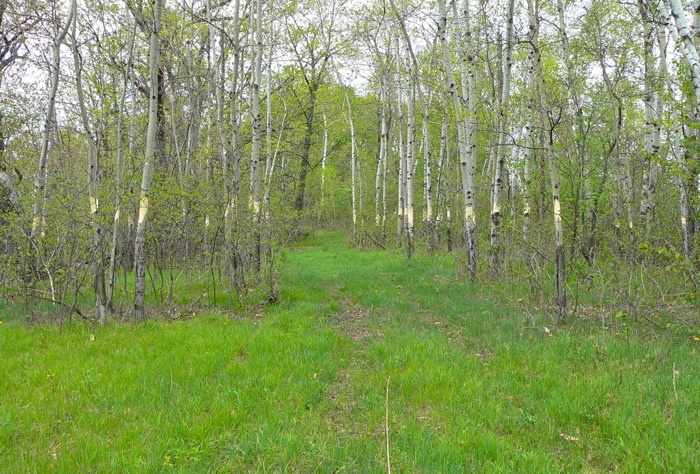 Here’s the same view from 2008 – once the aspens died, more light reached the ground, and the brush took off. 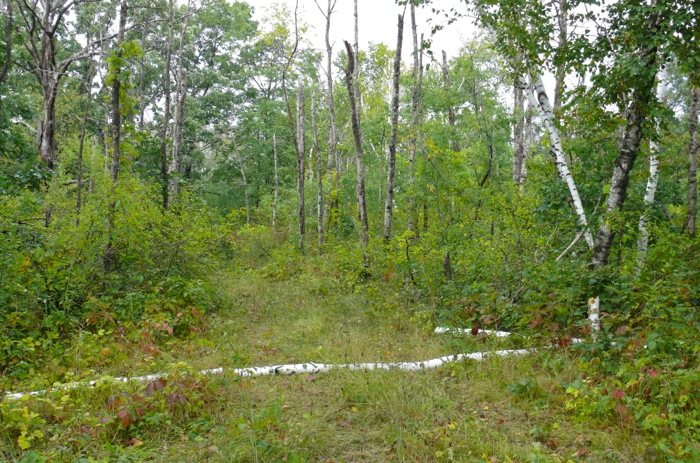 Here’s that view (from slightly farther away) after Mike and I finished our project today. 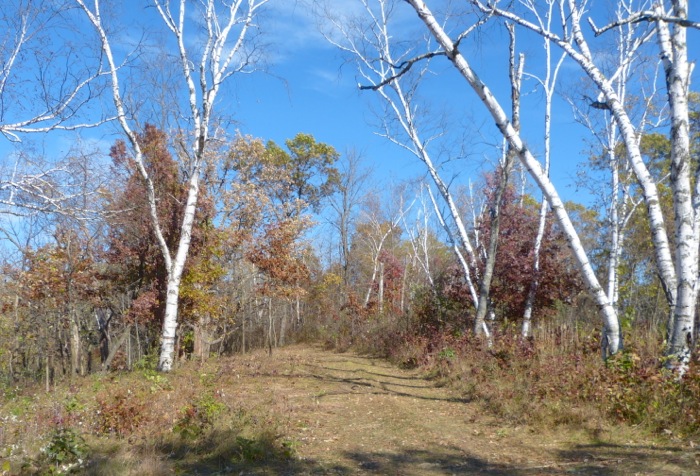 Here’s another set of photos from the other direction.  This first one was taken in June of this year, looking south along the path. 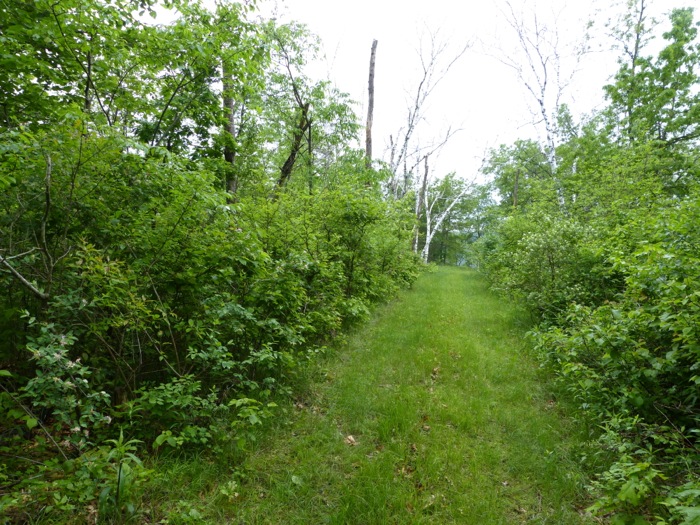 Here’s a ‘before photo’ of the wolf tree we had decided to liberate. 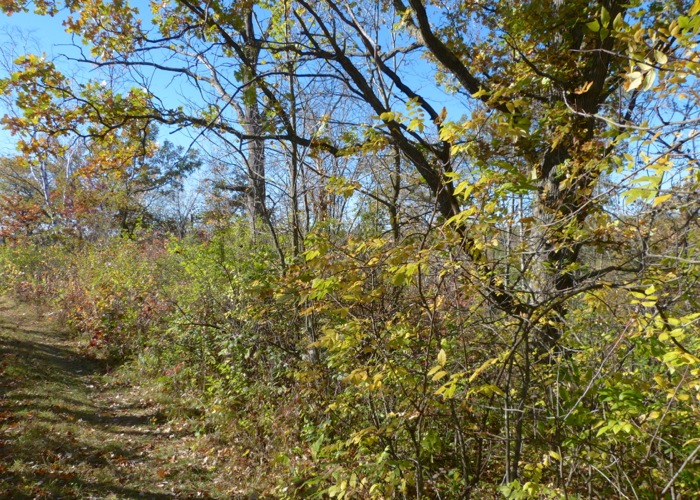 This was taken a few days ago – after we’d cut most of the brush, and made piles, but not removed the piles – with the wolf tree on the right. 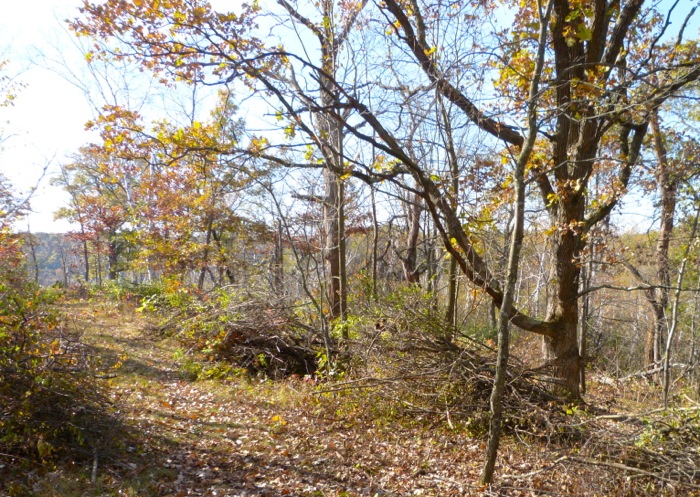 Taken today, after we removed the piles. 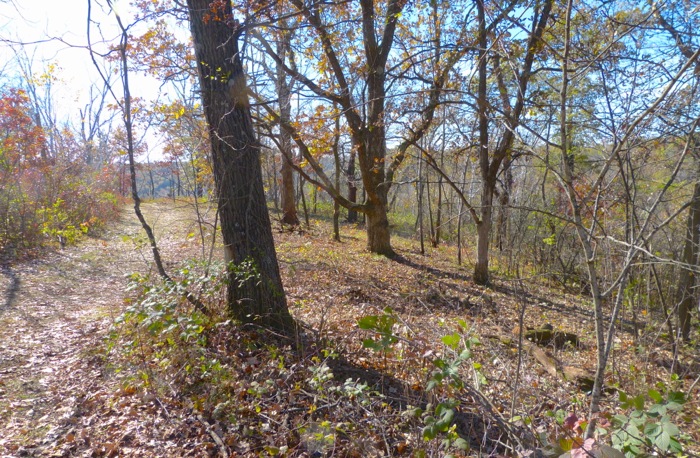 Now we can mow once a year, and watch for savanna vegetation to come up.

We had our first frost on October 12th.  This is – I think – the leaves of Hoary Vervain with frost crystals. 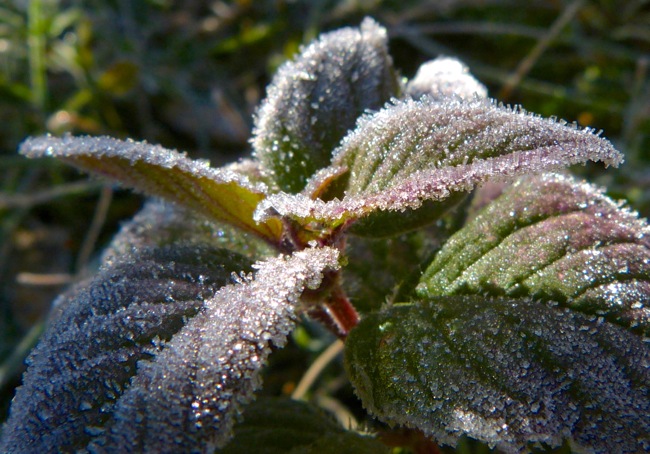 Mist and frost in Center Valley 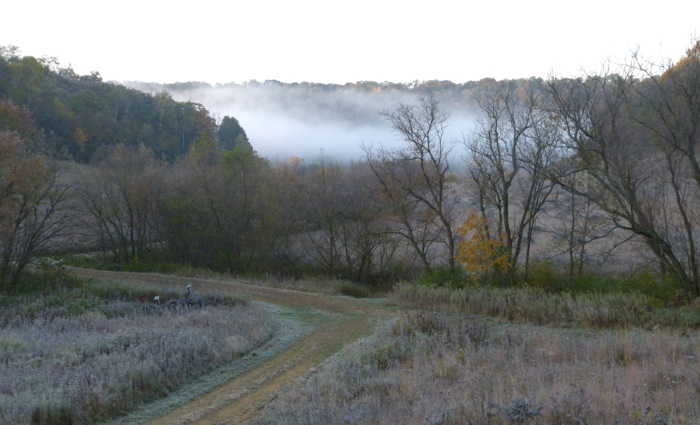 Mike walking down the dugway trail 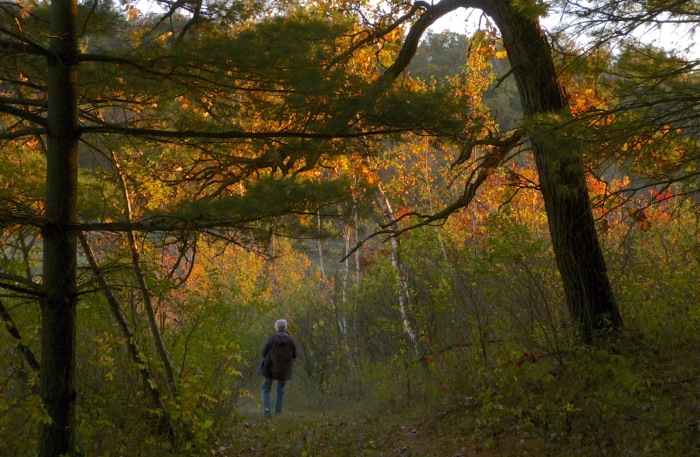 Sunset light on the ridge above 3 Finger Valley 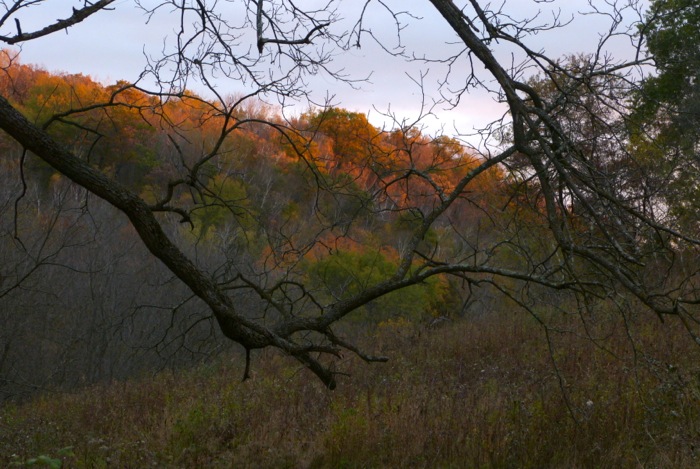 Everywhere we go these days, we see American Robins.   They’re migrating in huge flocks that fill the woods.  Every evening we see them heading north, over our ridge – they must have a nighttime roost somewhere near the Buffalo River.

I just found this invasive – Amur Honeysuckle – in our woods.  Tartarian Honeysuckle is very common here, but Amur Honeysuckle is apparently just starting to spread northward from southern Wisconsin.  I talked to Emmet Judziewicz today, and he said this is the first record they have of it this far north. 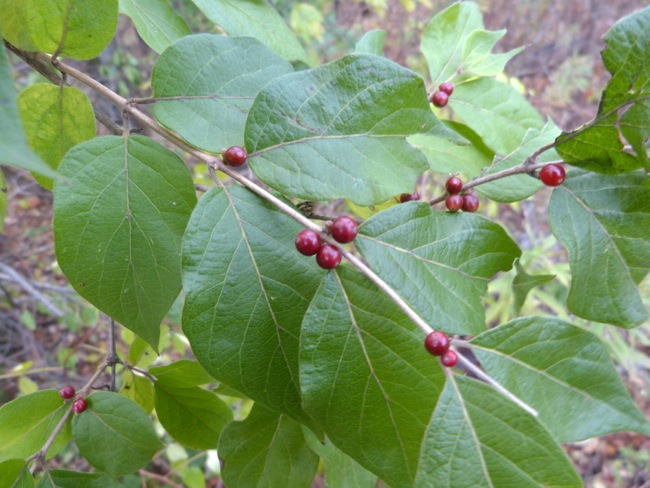 This is a wonderful savanna plant called Tinker’s Weed – another less attractive name is Horse-gentian.  I collected the fruits along roadsides, and threw them in some of our savanna areas a few years ago.  This year we have quite a few plants with fruit. 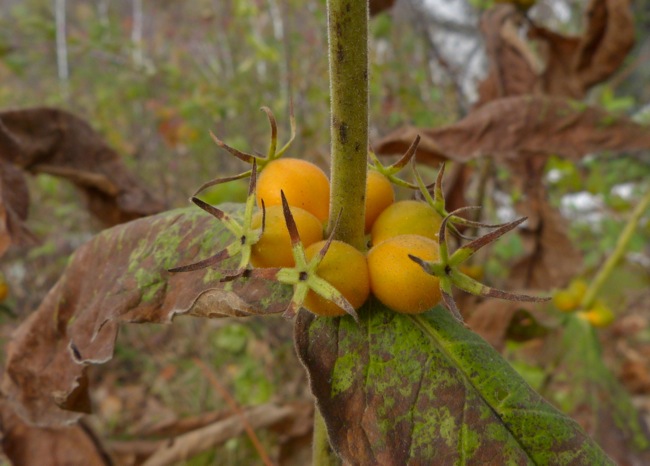 Winterberry – our only native holly 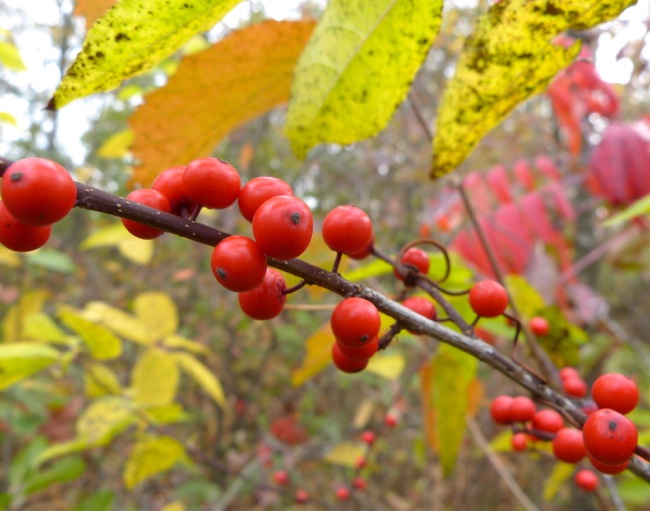 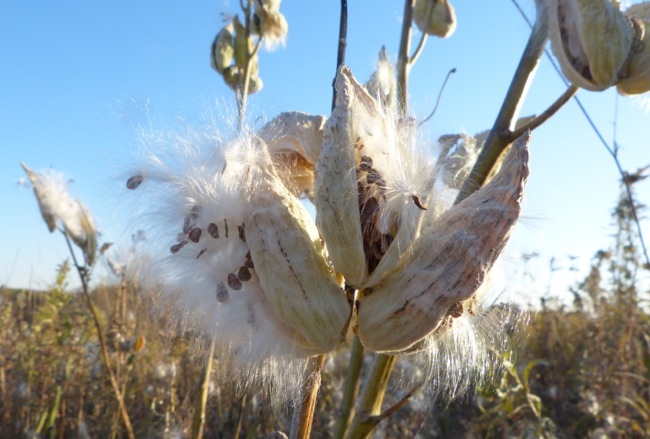 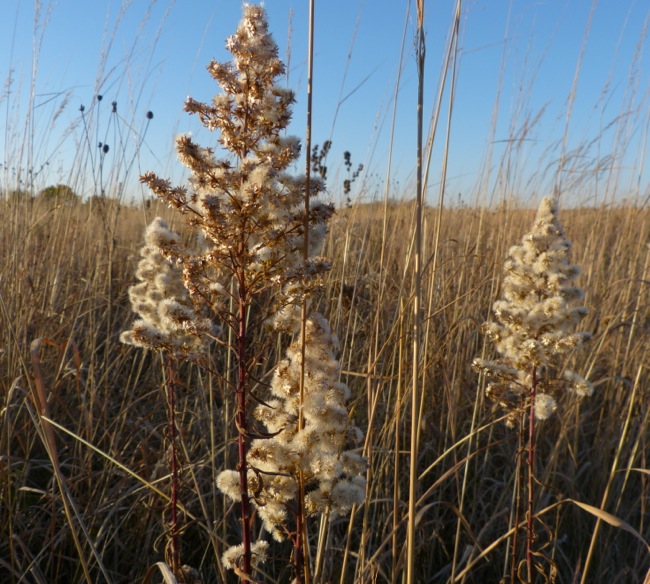 Paper Birch leaves against the sun 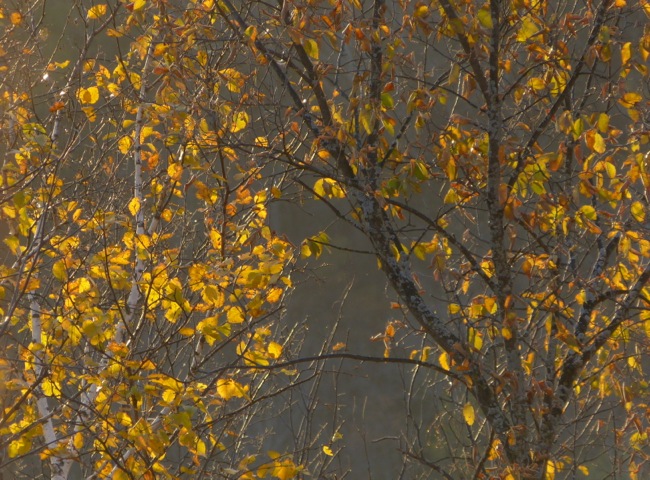 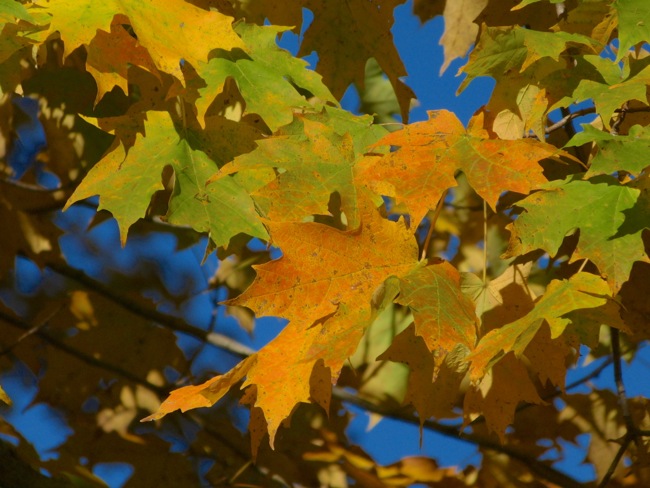 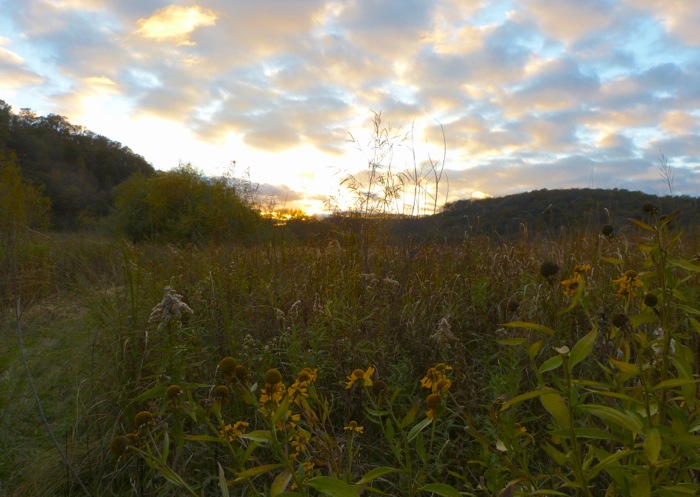 Crows heading to their roost for the night 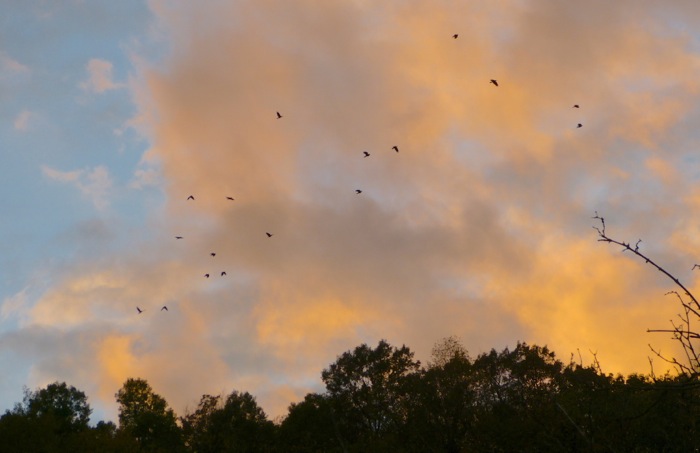