We finally got some rain – an inch and a half over the last few days.  Everything feels wetter and now the weather is getting colder.  Here’s the view out our front windows as one of the storms was rolling away. 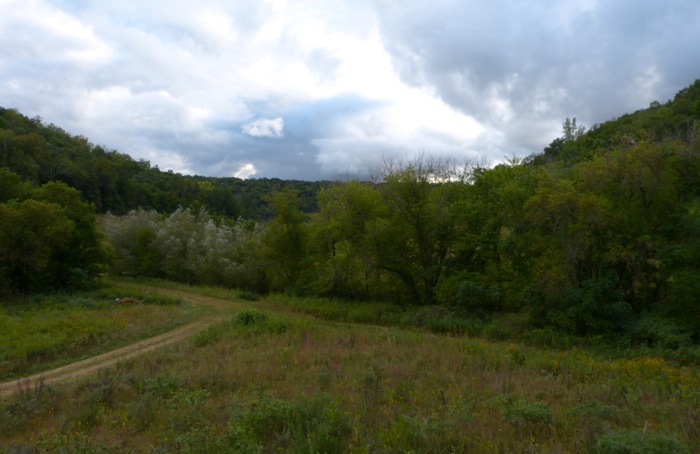 The prairies are getting their fall colors…Pat’s Prairie. 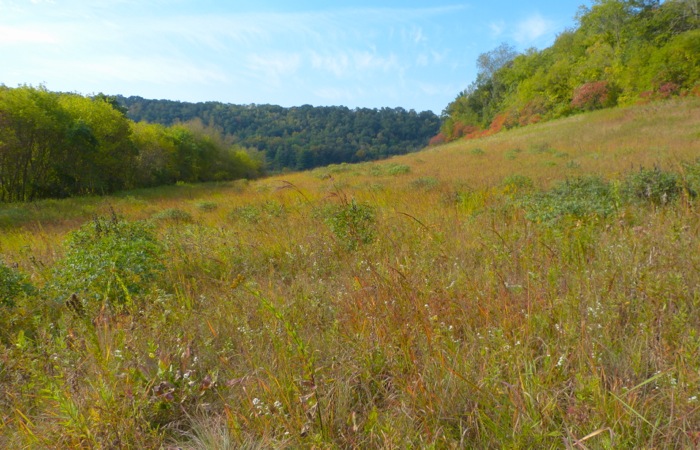 And all the fall flowers are blooming.  This is Bottle Gentian – one of the few very blue flowers. 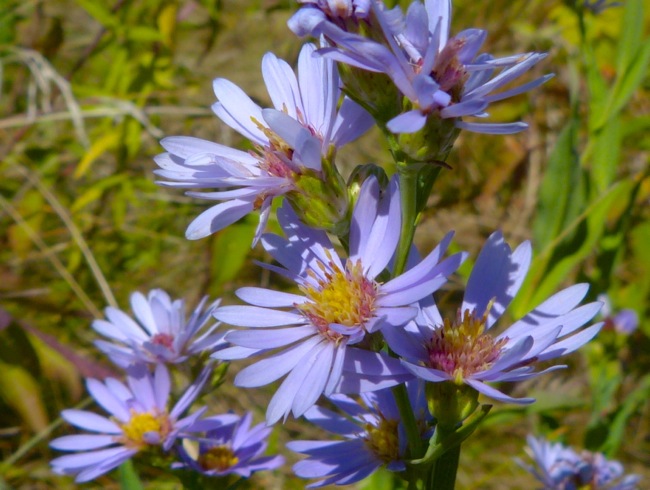 Most Rough Blazing Star flowers are purple, but every once in a while I find a plant with white flowers. 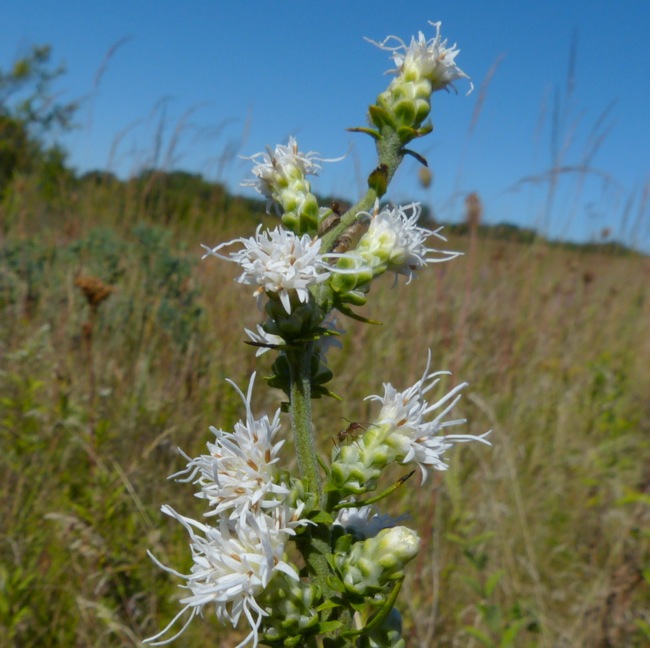 Brown-eyed Susans are blooming into the edges of the woods. 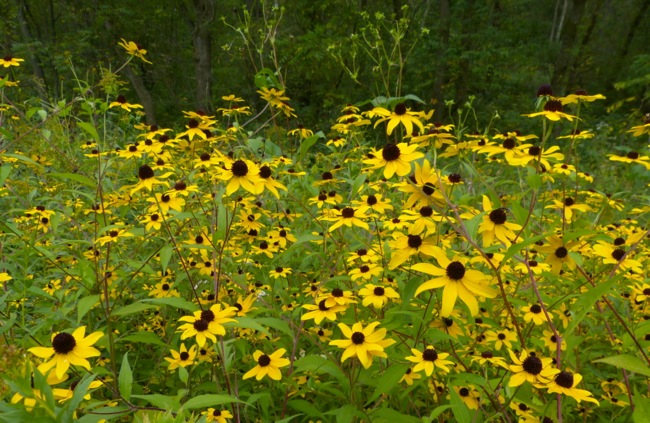 There aren’t as many flowers at this time of year, so there tend to be insects on nearly every one.  This is Aromatic Aster, and most of these insects are tiny beetles. 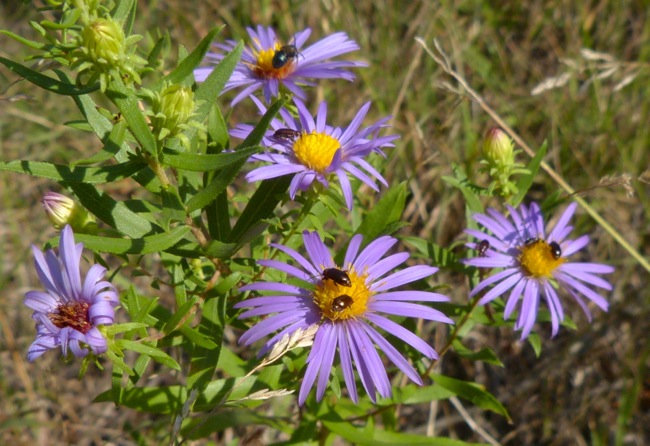 Showy Goldenrod is one of the best late-blooming insect flowers.   It’s especially attractive to bumblebees. 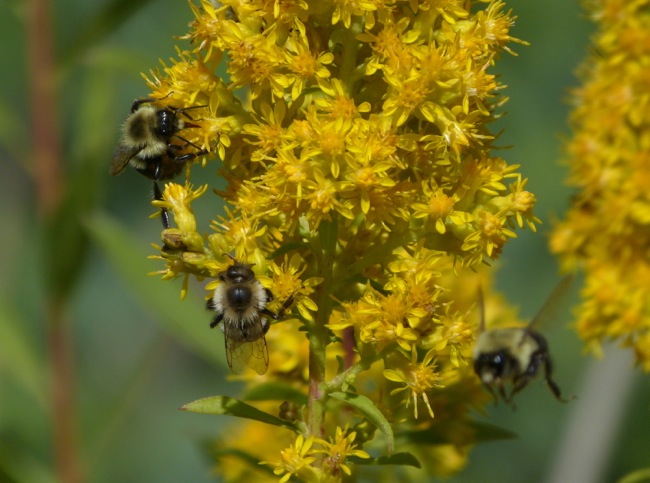 Now that the leaves are falling off the trees, it’s easier to see this summer’s bird nests. 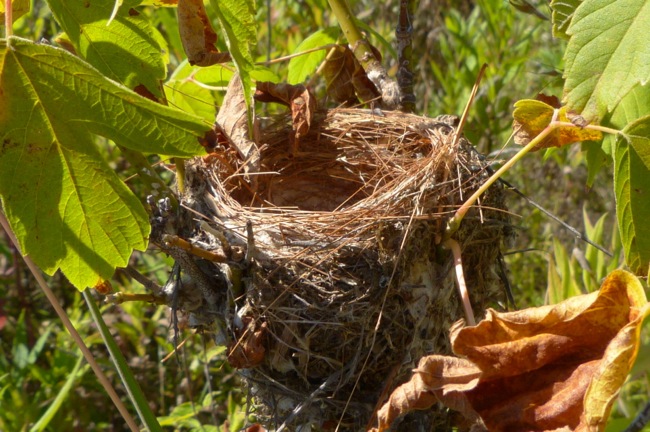 We’ve finally decided to tackle the tangle of woods that’s grown up after we had the pines logged (in 2002) on Pine Point.  We had originally planned to mow it all, and plant prairie.  But at this point it’s got shrubs and small trees that are at least 20 feet tall, and it still has stumps and slash from the logging process.  So I think we’ll let it be a woods – we’ll try to keep invaders out, and watch the succession of plants that grow there.  Right now it’s mostly Black Cherry, with some Box Elder and Burr Oak.  We need to remove honeysuckle and small amounts (fortunately) of buckthorn. 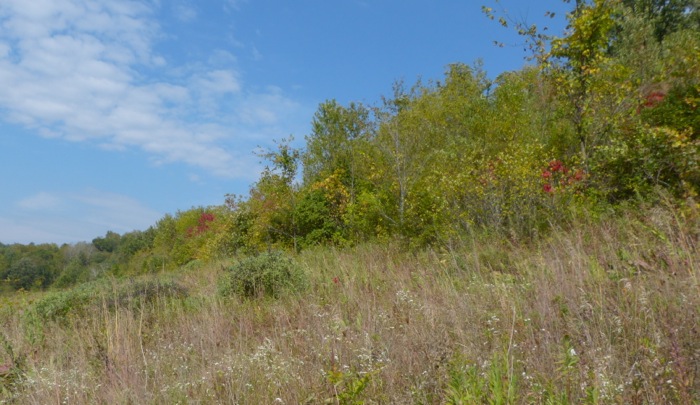 We were afraid we wouldn’t be able to get into the woods to work on it, but it’s actually fairly open and easy to walk.  I spent last week making a path through the middle. 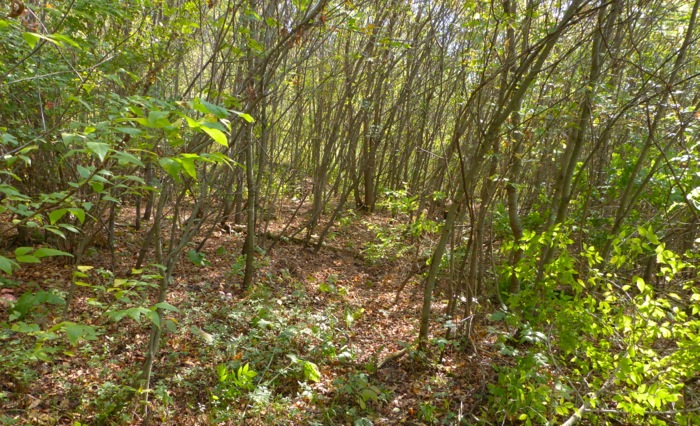 Another project I’m working on is opening up the east side of Indian Grass Point.  I’ve made an opening from the top prairie, all the way down to below where the big Burr Oaks are, along the middle of the hill.  Now I can throw the brush down as I work.  This photo looks south, across the area I’ve cleared, into a brushy part that I’m still working on. 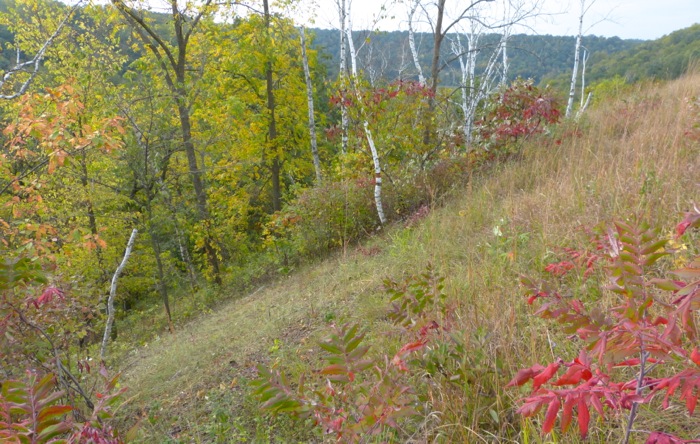 Here’s another view – looking north from that same spot.  There’s a lot more brush to clear!  But there’s prairie under all of it.  I found False Boneset (Kuhnia eupatorioides), and Butterfly Weed (Asclepias tuberosa) in addition to the usual prairie plants that seem to survive under brush (Monarda, Thimbleweed, Pussytoes, Hoary Puccoon, Violets, and a few grasses). 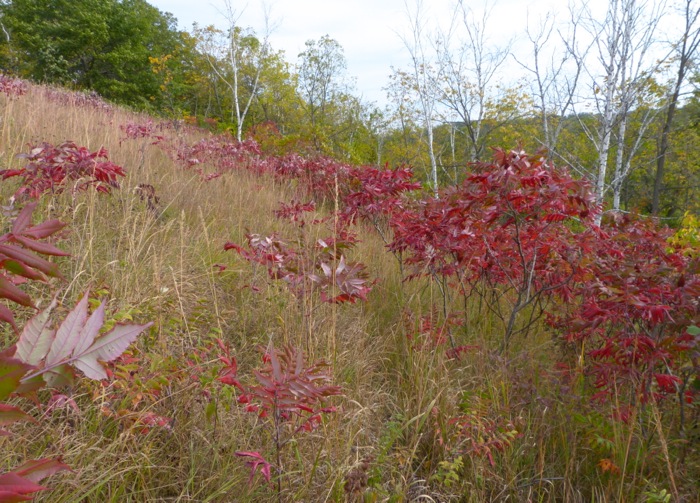 The Baltimore Orioles finally left in mid-September.  Up until the day of their departure they were eating lots of grape jelly.  Right after they left, the honey bees found the leftover jelly and finished it off.  Normally we don’t see many honeybees here – we’re at least 2 miles from the nearest hives.  But I guess in the fall they’re more motivated to travel for food, and they love the jelly.

Most of our field and woods edges are tangles of brush and vines.  I don’t notice them much in the spring and summer, except as a place to look for interesting birds.  This past week the leaves have been turning color, and they’re again full of migrating sparrows and warblers. 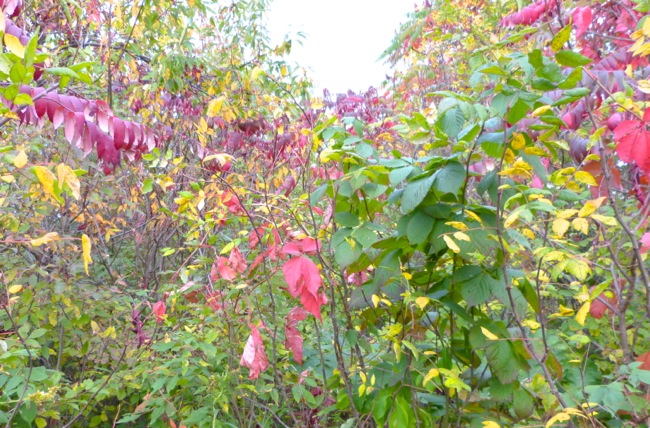 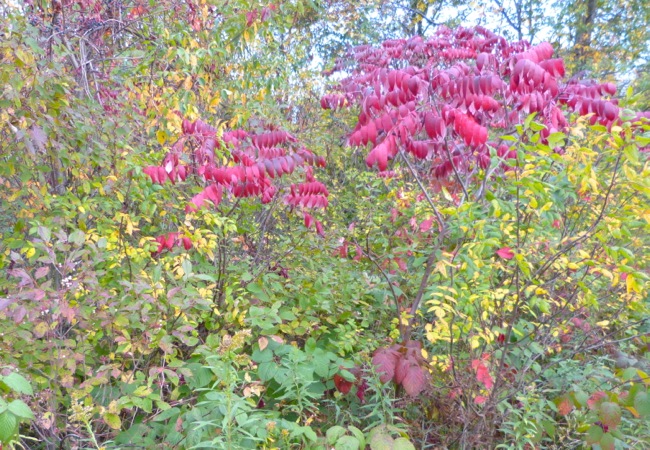 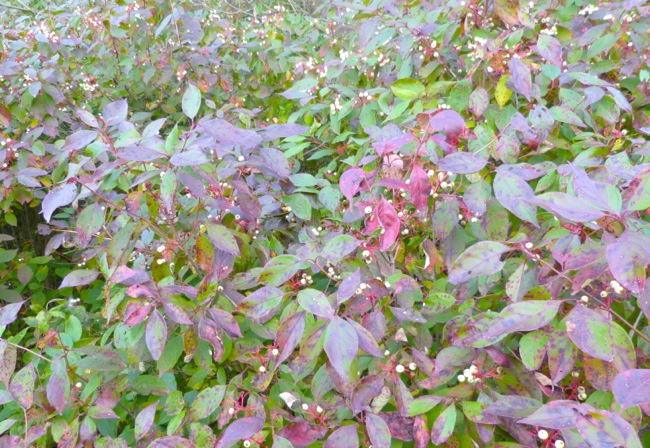 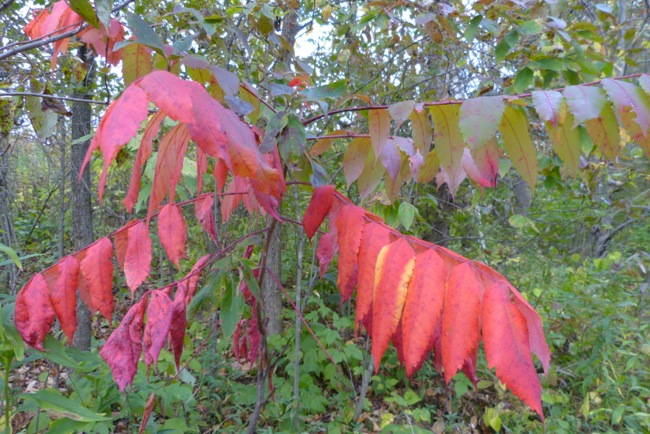 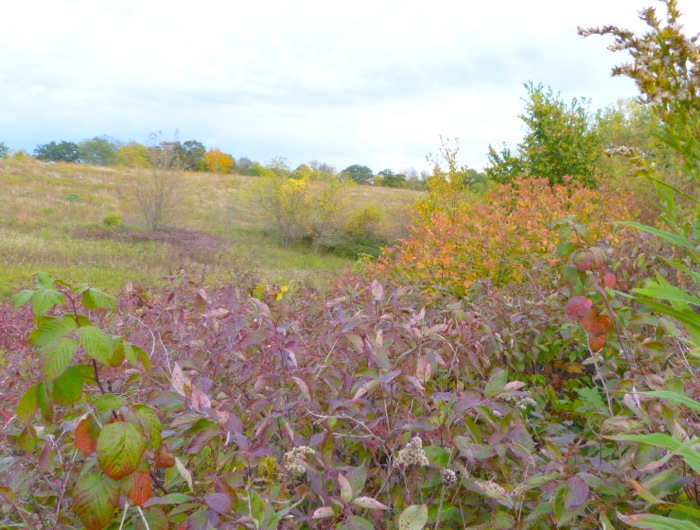 And here are a few creatures from the last few weeks. 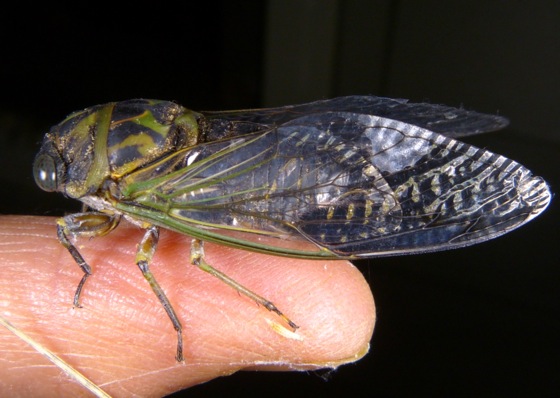 I found two of these caterpillars and brought them home so I can see the adult when it emerges next spring.  They’re Brown Hooded Owlet caterpillars, and I’ve never seen the adult. 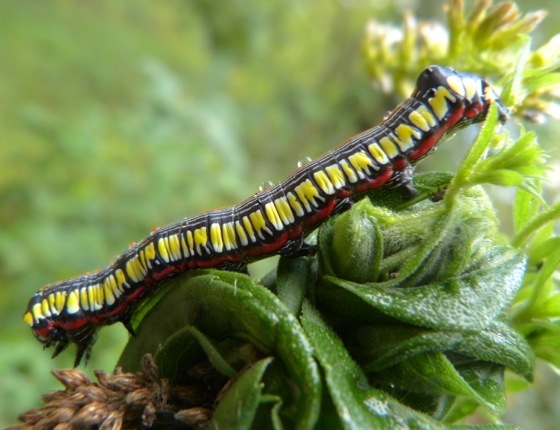 These next two can be pests on crops as caterpillars, but the adults are beautiful.

Beet Webworm – caterpillars feed on beets, chard and spinach, as well as some native weedy plants 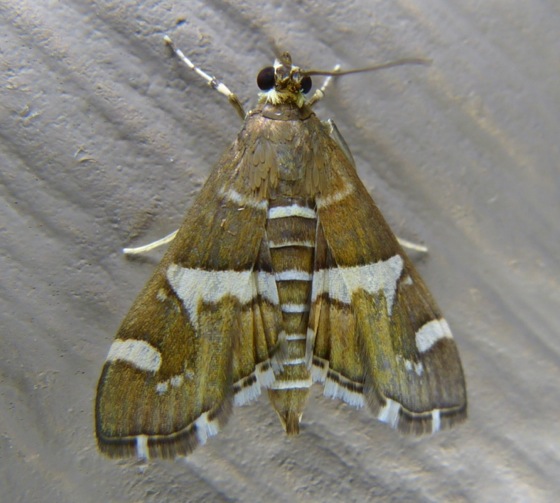 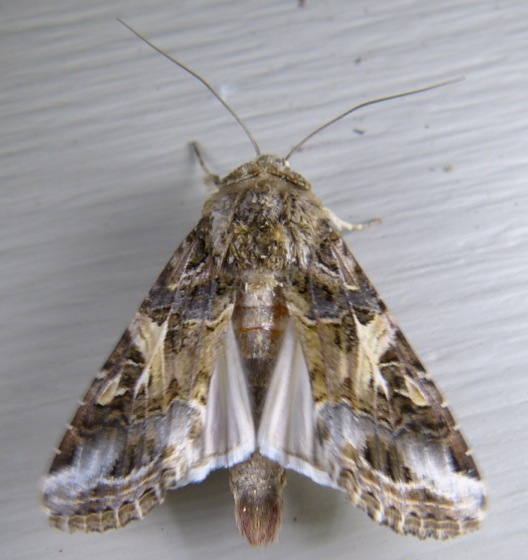 Bear at the beaver dam – it looks like he just went for a swim.  From one of the wildlife cameras. 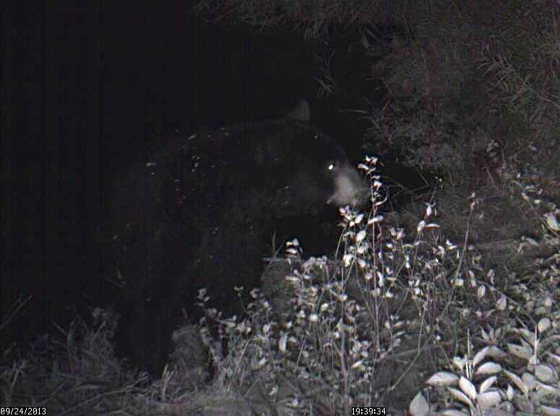