I keep hoping that I can start a new blog post by saying “It’s spring!” – but it hasn’t happened yet.  We almost got rid of our snow last week, but now we’re getting back to back snow/rain/sleet storms.  The driveway is soft and slithery, so the ground is thawing, but the snow just doesn’t seem to stop coming.

The birds seem to think it’s spring, in spite of the weather.  The early spring migrants have all arrived – Red-winged Blackbirds, Eastern Bluebirds, American Woodcocks, and American Robins.  Even some of the later migrants that depend on flying insects have braved the storms.  I’ve been seeing Phoebes hunting around the house and over the creek for the last few days.  Here’s the first Bluebird, hunting insects on Indian Grass Point. 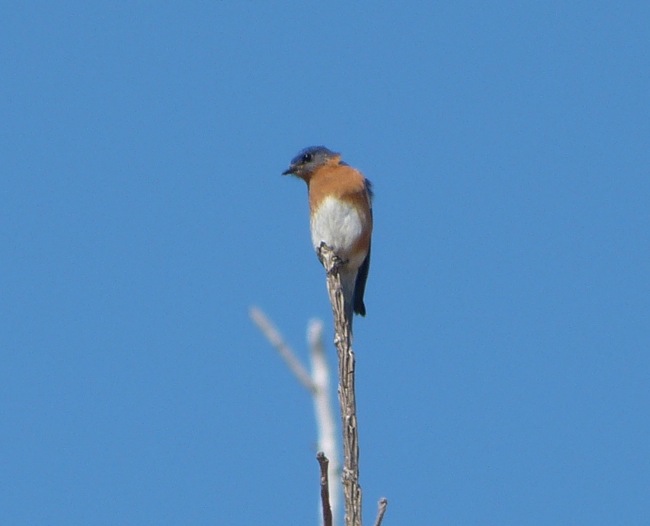 An American Woodcock caught by one of the wildlife cameras.  It was doing its mating display at the edge of Pat’s Prairie. 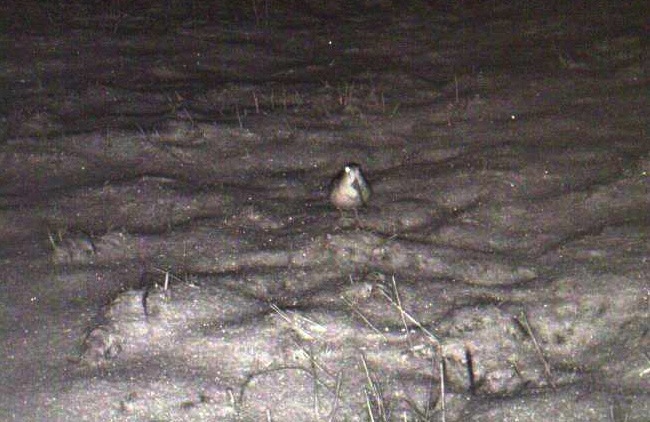 This is a patch of woods that I don’t usually spend much time in.  It’s been heavily logged in the past, and it’s grown up in mostly small Aspens, Elms, and Box Elders.  But the Robins love it.  When I went past it a few days ago, there were hundreds of Robins in the trees, on every fallen log, and on every spot where the snow had melted.  The woods was alive with them, hopping and chirping everywhere. 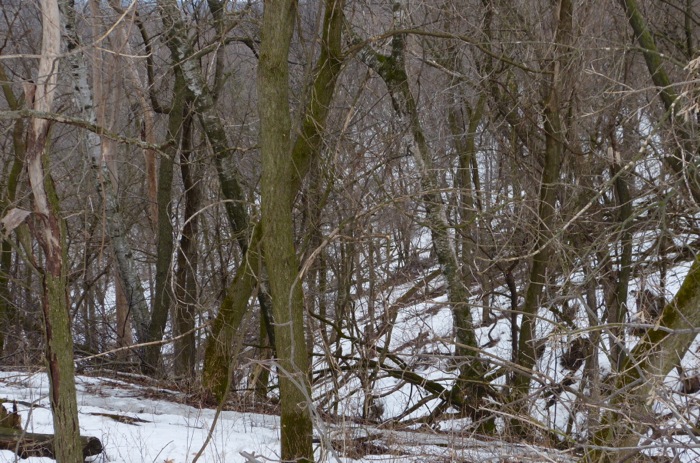 Until last week we still had at least a foot of snow in most places.  Animals, especially deer, were working hard to find areas free of snow where they could find food.  We saw dozens of them grazing on the steep south-facing slopes of the hills where the snow wasn’t so deep.  This one was napping on the hill just above the house. 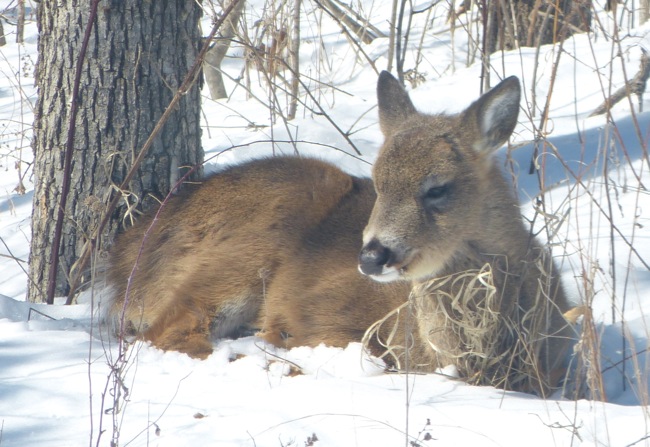 Another deer, and a couple of Wild Turkeys grazed nearby. 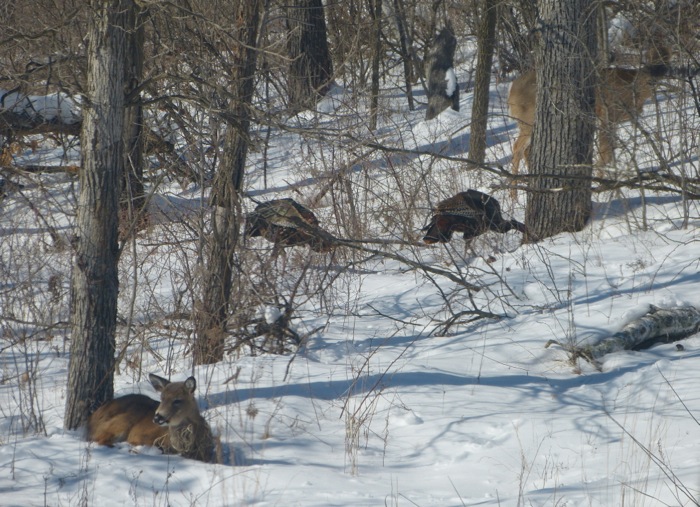 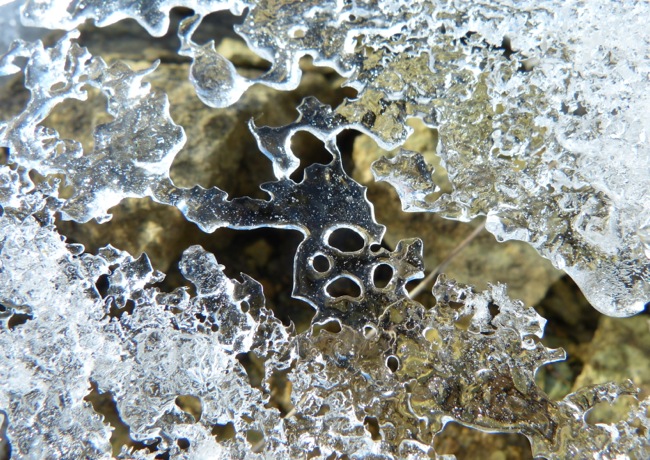 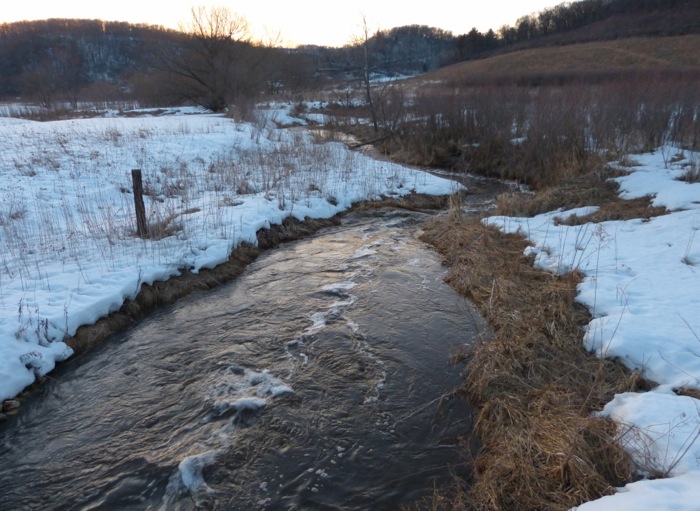 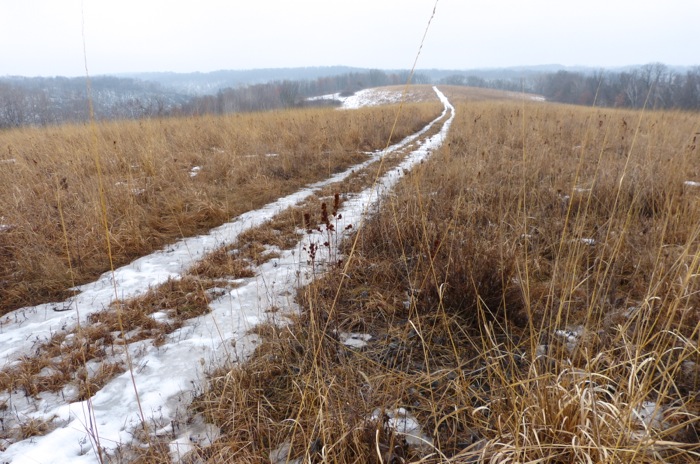 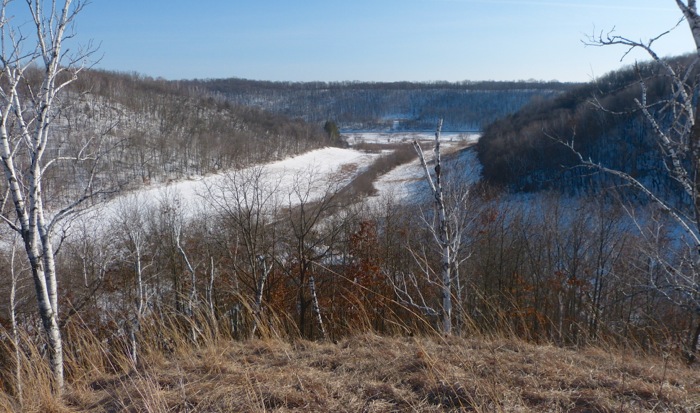 After walking past it all winter long, I finally spotted a Cecropia cocoon right at the edge of the driveway.  I’m going to rear Cecropias this year, so I brought it back to a cage on the porch.  If all goes well, it should hatch in mid-May. 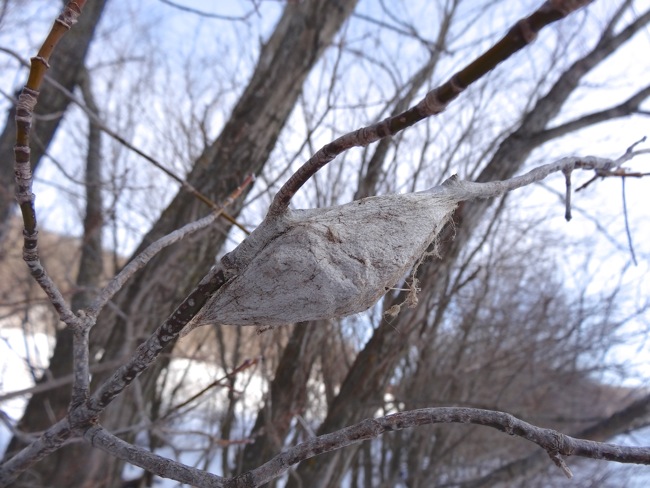 I found my first shed of the year.  The deer must have just lost this one.   After sheds have been on the ground for a while, they get nibbled and they don’t look so perfect.   I’ve collected a few sheds over the years, but I leave most of them where I find them.  They’re important sources of calcium and magnesium for mice and other small mammals, and I like knowing that everything gets recycled. 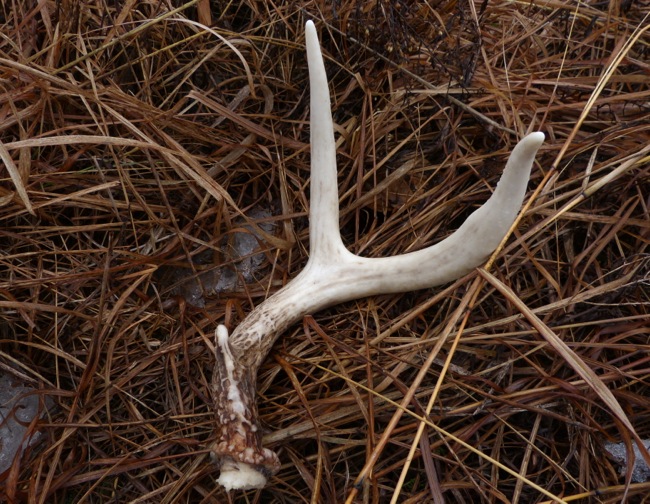 There are more willow flowers blooming, but not many other flowers. 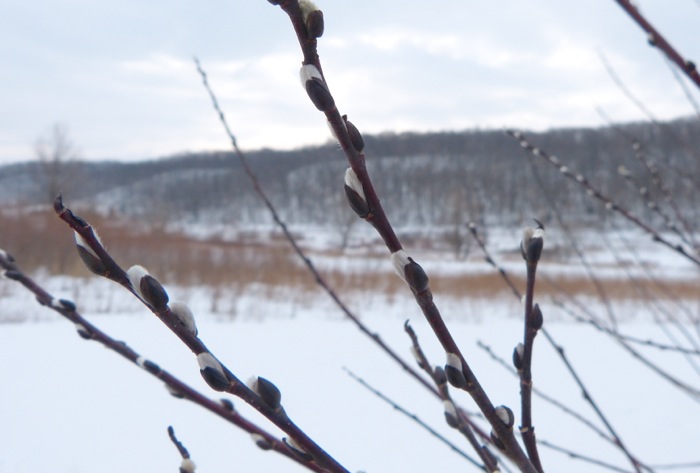 I’ve finally started seeing a few moths.  This is the very first one of the year – an Infant Moth on the driveway in one of the few moments of sunshine. 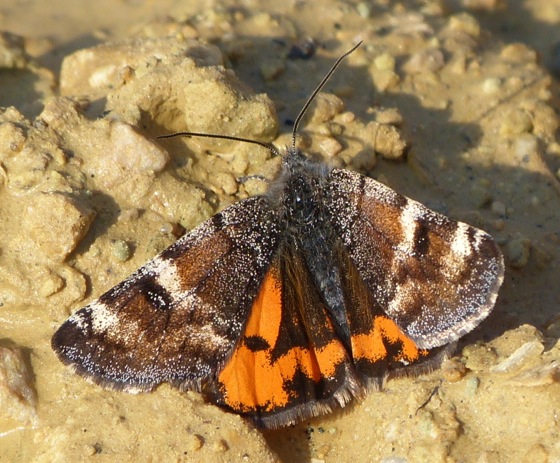 A Ctenucha Moth caterpillar – also on the driveway.  Usually I see these caterpillars often during the winter – whenever the air temperature gets above about 20 degrees.  But this is the first one I’ve seen for a long time. 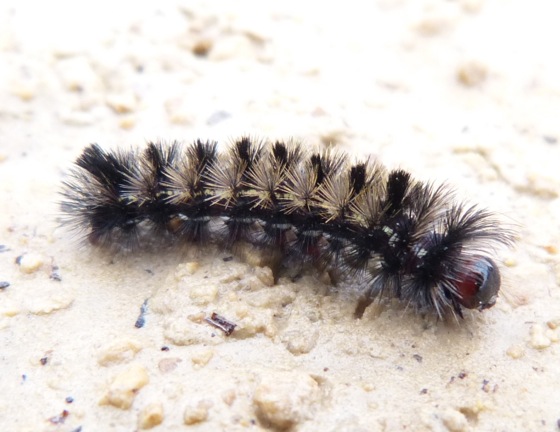 I’ve put sugary bait on tree trunks on a few of the warmer nights, and put my moth lights out a few times.  The bait is more successful than the lights at this time of year.   Here are a few of the early spring moths that came to my bait. 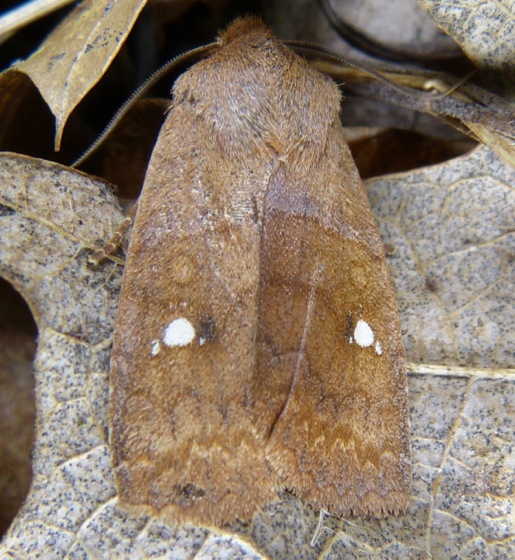 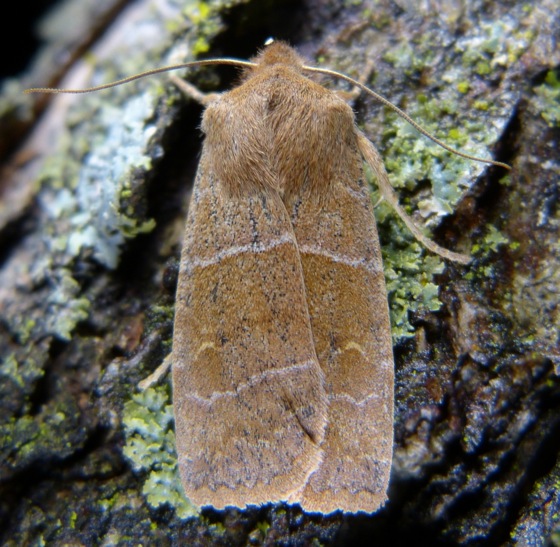 And two that came to my lights. 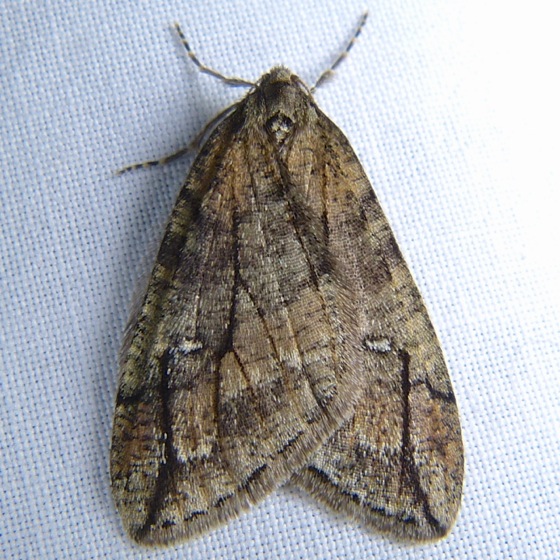 Roland’s Sallow – a new one for my farm list 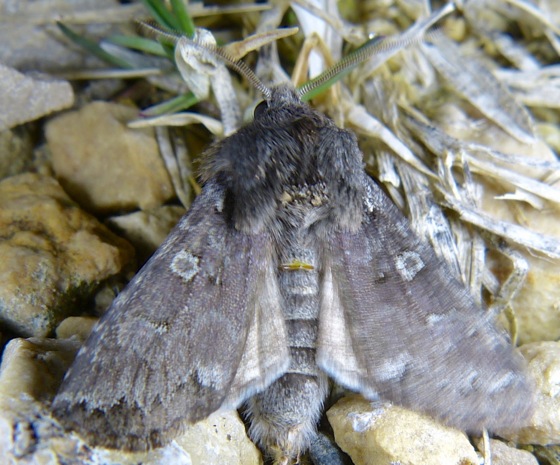