Now you can subscribe to this blog, and get notified about new posts.   You can do it by ‘liking’ our Facebook page, where I post links to all the blog posts as well as any ‘breaking news’ or photos.   Or by signing up to get an email whenever I do a new blog post.  Check out both choices at the top right side of this page.

The weather here is turning into fall.  The grasses in the prairies all have their fall colors – they’ve gone to seed, and their stems and leaves have changed to beautiful reddish browns.  And in between the grasses, are blooming asters. 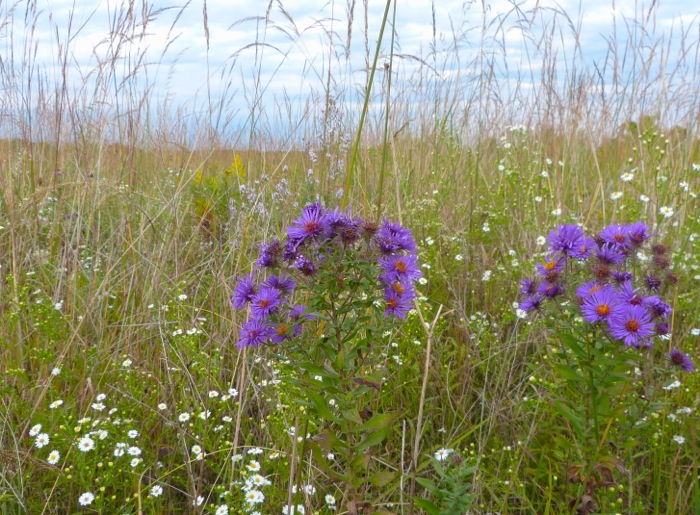 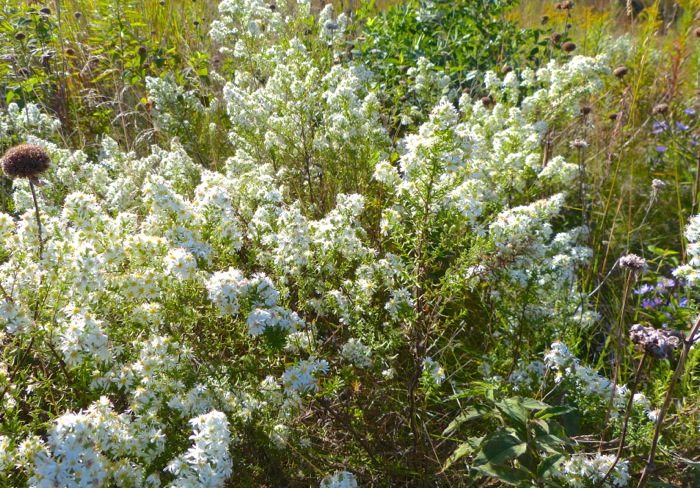 Silky Aster in one of the bluff prairies. 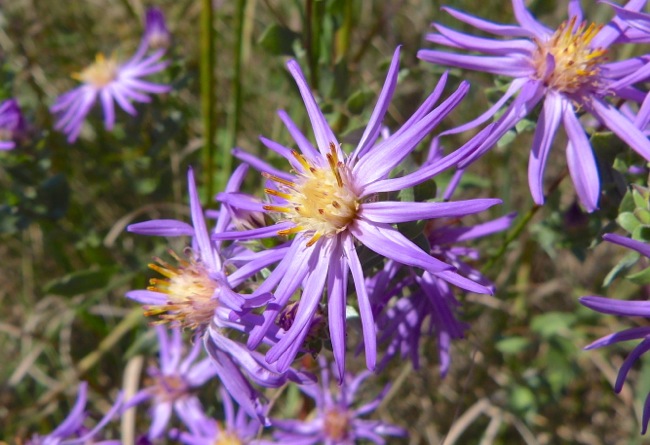 We’re still having some warm days, so I’m still seeing moths, and quite a few butterflies.

This doesn’t seem to be a good year for Monarchs.  We saw a lot of them early in the summer, but not many are migrating through now.  Here’s one of the migrants, nectaring on Stiff Goldenrod. 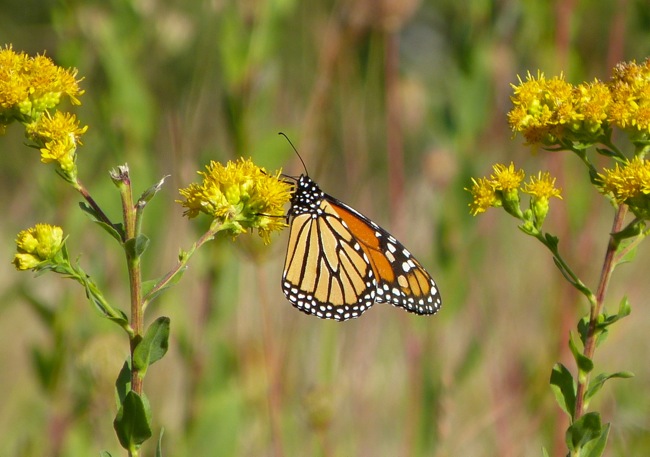 It has been a good year for visiting southern butterflies.  These next few butterflies are all species that generally live in the southern U.S., and only make it up here once in a while.

This is a Dainty Sulphur.  The last time I saw one here was in 2007.  This year there have been dozens, dancing along the edges of our gravel driveway.  They’re tiny – with a wingspan of about an inch. 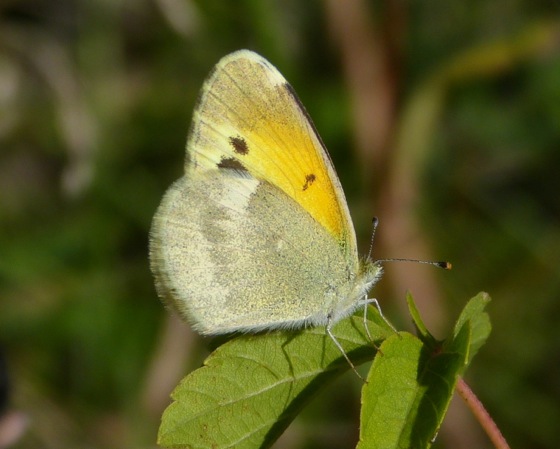 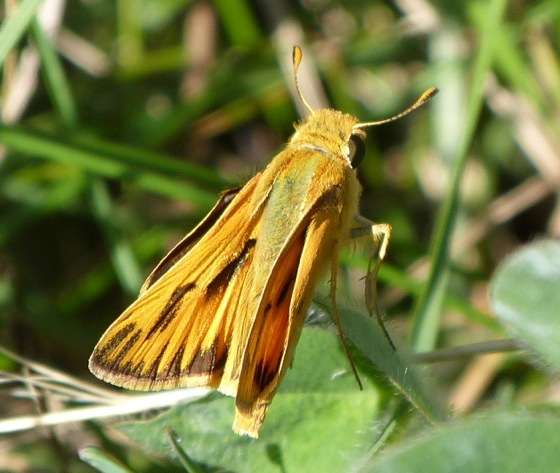 A Sachem – another species of skipper – a new one for the farm. 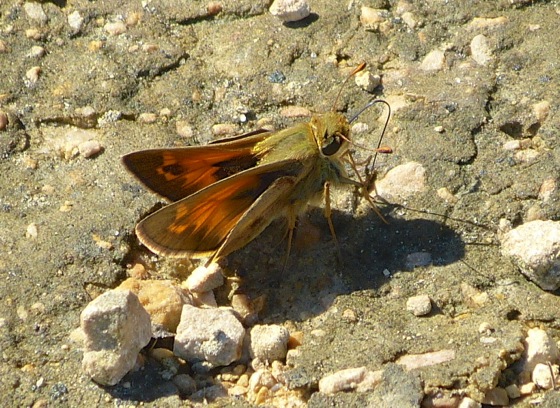 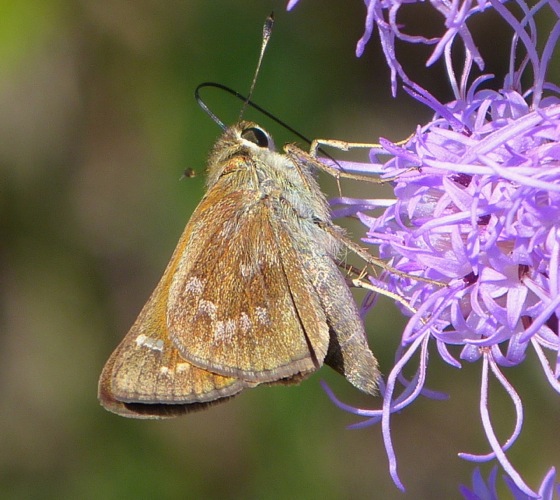 Reakirt’s Blue – I saw this one in mid-July.  It was a female and it looked like she was laying eggs on some plants at the edge of the driveway.  I’ve been watching for a new generation, but haven’t seen any. 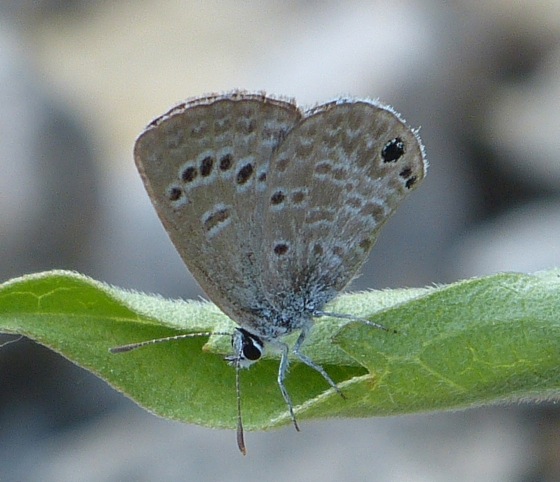 And – one of my favorites – Common Checkered Skipper.  It’s common in the south, but not at all common in Wisconsin.  I’ve seen at least two in the last few days – a male and a female. 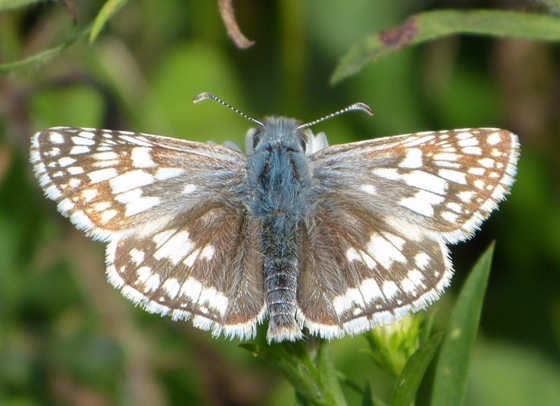 Pair of Common Checkered Skippers – a bit of mating behavior 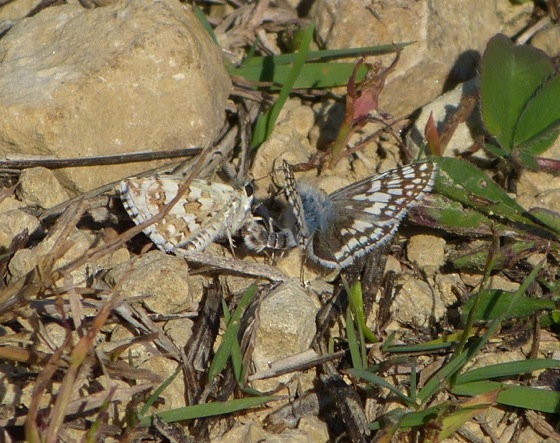 Fall is a good time to see spiders.  This was made by – I think – one of the funnel weavers, in the family Agelenidae.  I had never seen a web shaped quite this way – like a tornado.  The funnel is a retreat, where the spider can sit to watch for prey. 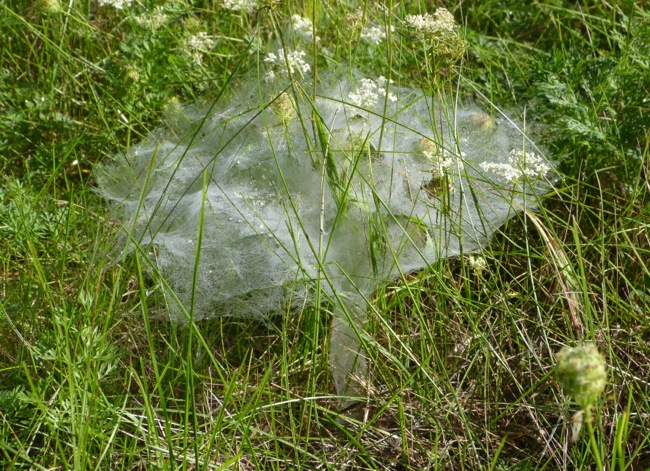 Here are a few creatures from my moth sheet.

A cranefly – one of the prettiest – and largest – I’ve seen.  It’s called a Giant Eastern Cranefly.  Its legspan is about 4 inches.  (The creature next to it is a small moth) 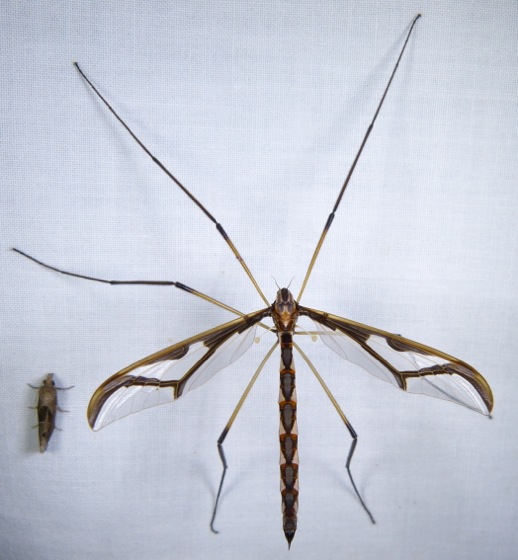 Darling Underwing – This moth has bright pink hind wings, which are just barely visible in the photo. 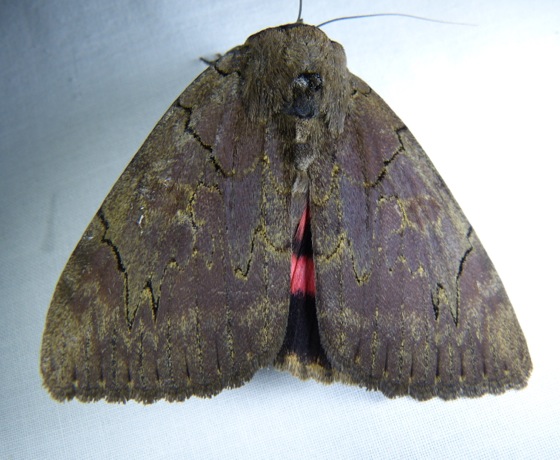 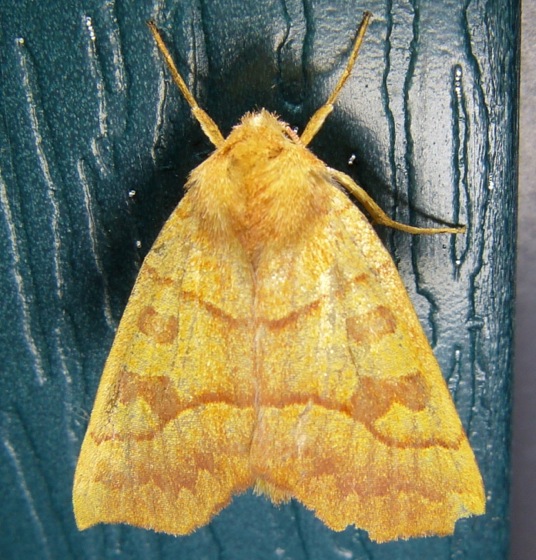 This is a Golden Borer Moth.  It’s not very common, and the only other time I’ve seen one was last year at about this time. 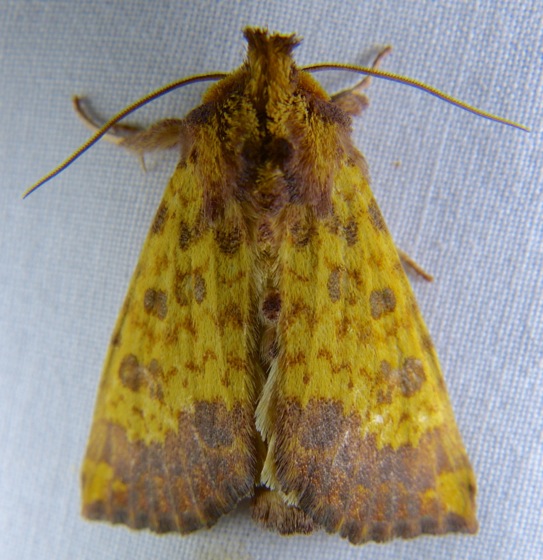 A new moth for the farm, and an uncommon one.  A Columbine Borer Moth. 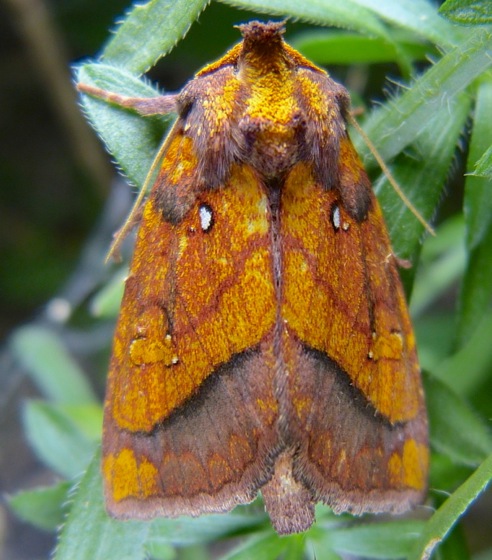 Last week went to our friends Gary and Ruth Ann’s for dinner and brought along my moth lighting equipment.  We thought it would be fun to see what kinds of moths are in their valley.  Yaeger Valley – their valley – has a mix of woods, organic agriculture, and a rod and gun club.  The moths we saw – that night – were mostly species that are pests on agricultural crops.  It’s interesting to see how much agriculture – even organic agriculture – affects the environment around it.  To see a page about all the species we saw, click HERE.

We’ve been having a great time with our new game cameras.  We have 4 of them set up in strategic places for seeing interesting animals.  We see mostly deer, but we’ve also seen beaver, raccoons, flying squirrel, coyotes, trout, and a Great Blue Heron.   Here are a few of the best photos. 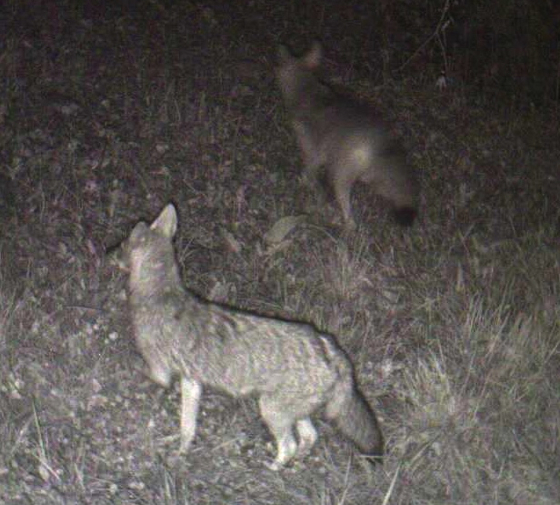 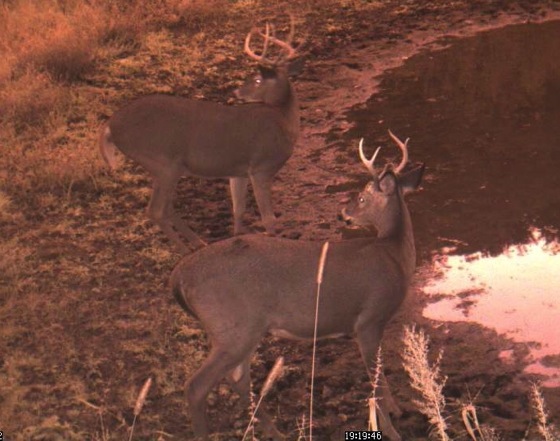 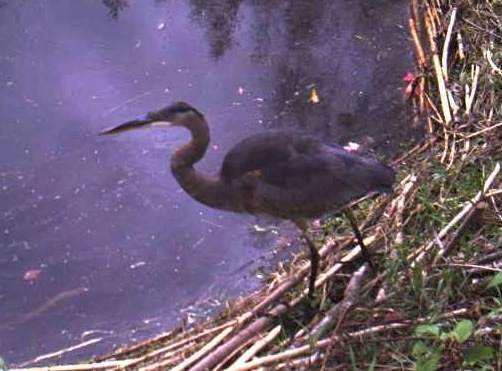 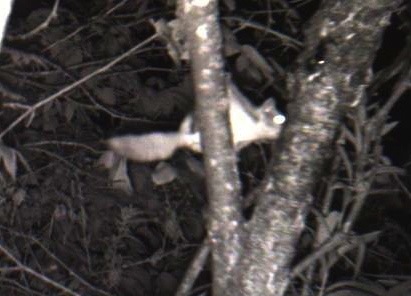 Today we had the annual inspection of our place by the Land Trust where we’ve donated our conservation easement.  It’s always fun – we get to have a nice conversation, and show off our land to someone who really appreciates the land and the progress we’ve made.  This year the inspection was done by Dave Linderud, a friend who lives in the next county, and has prairies of his own.

Dave Linderud taking photos to document how our land looks this year. 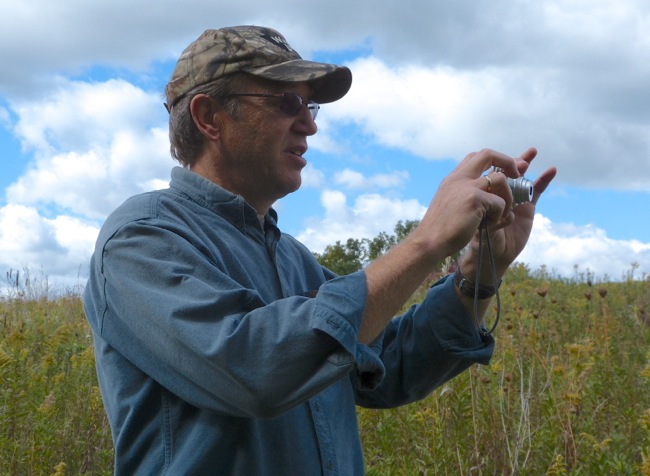 We’re right under the flyway between Minneapolis and Chicago.  The planes are quite high by the time they get here, but we can see them, and if we were in a plane in just the right place, we’d be able to see the farm.  We’ve flown over the farm several times, but only once when the weather and the conditions were just right to be able to see it.    Here are what Mike calls the “Monday morning consultants” – heading out for the week’s work. 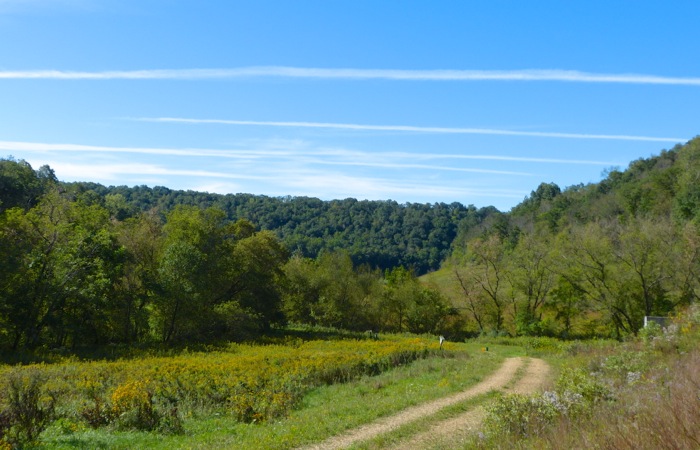 And the full moon over the wetland – a few weeks ago.