Spring has cooled and slowed down a little.  It’s wonderful – the in-between stage when the leaves are half unfolded is lasting much longer than usual.  It’s a bit harder on the flowers – some of them bloomed early and now are getting nipped by the frosts.

One day last week we had snow.  None of it stayed on the ground, but there were bursts of snow showers all day, and it was cold and windy. 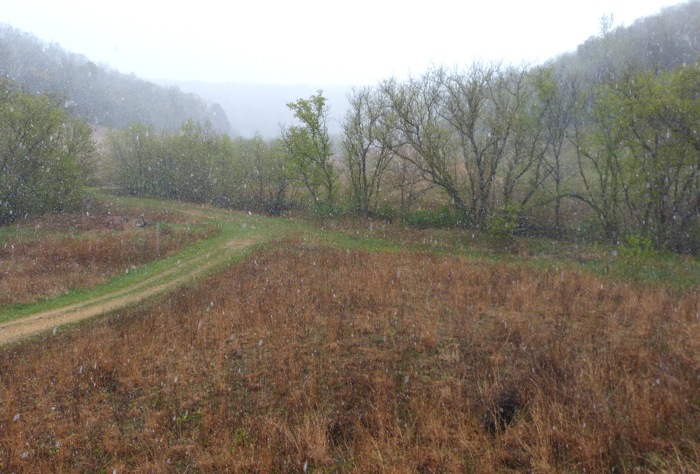 The butterflies appear as soon as the sun comes out.  I’m still seeing mostly Red Admirals – people around the country are also seeing more of this species than in normal years.  I’ve heard of large Red Admiral populations from Texas to Georgia, and north to Minnesota and Wisconsin.  I’m going to check the nettle plants for eggs – I’ve only reared them once, long ago.  I’d like to get some better photos of the caterpillars.

I’ve also been seeing swallowtails.  This is either a Tiger or a Canadian Swallowtail – difficult to tell from the top of its wings. 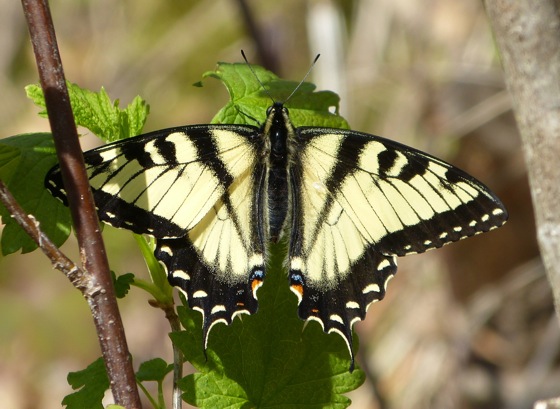 Last week our friend Emilie came down to collect Garlic Mustard to feed to some of her Cabbage White butterflies.  She brought along two of the students who work in her lab.  They all worked hard, and we pulled Garlic Mustard from a big section of the woods.  Here’s the crew:  Anne, Emilie, Ihab and me. 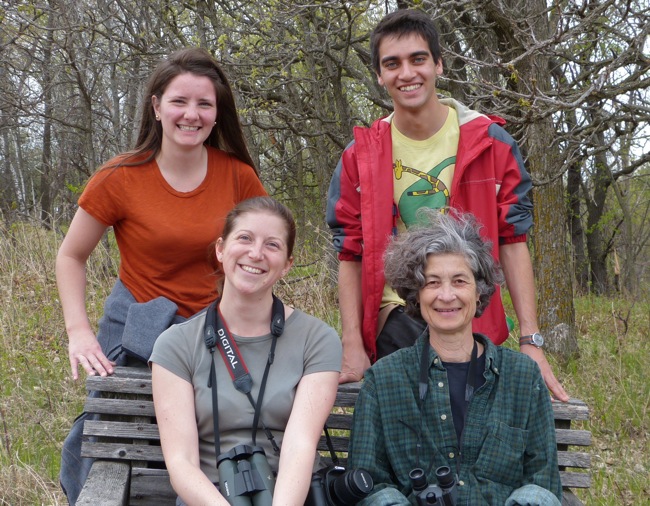 We also took a couple of long walks to give them a tour of the farm, and watched moths that night.  It was the best moth night of the season so far.

I’m still seeing lots of new moth species for the farm.  I’m sure that eventually that will slow down, but right now it’s exciting to be learning so much every time I turn on the lights. 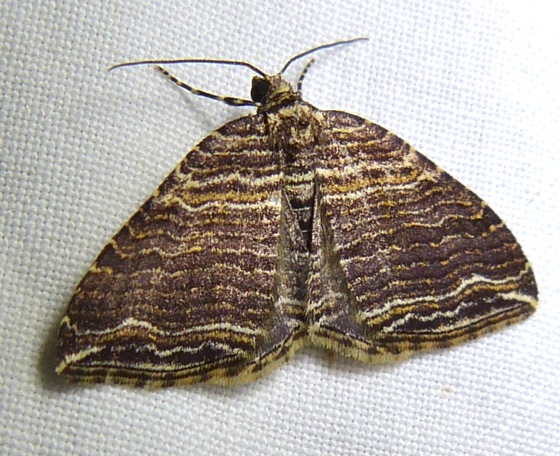 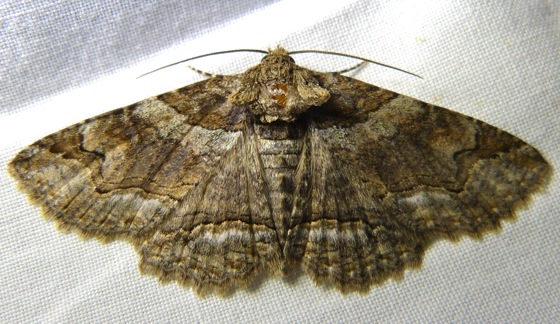 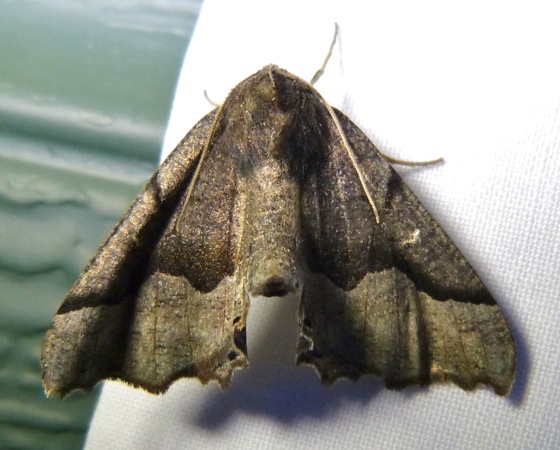 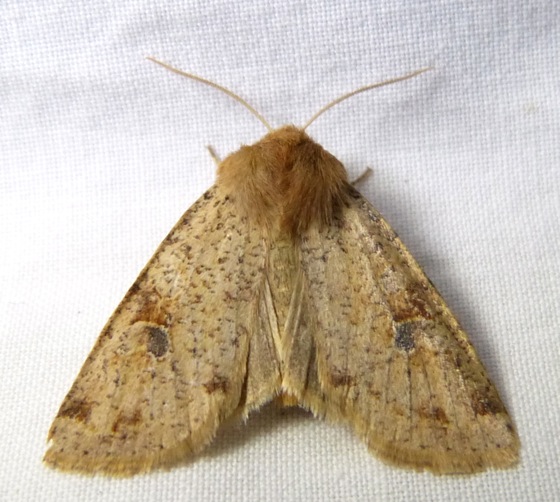 Our newest planted prairie is the top of East Center Valley.  We have about six fields like this, and we’ve had a hard time figuring out what to do with them.  They were hay fields at one time, so they have lots of non-native grasses and weeds, but under it all are some nice natives – violets, Giant St. John’s Wort, and asters.  I planted prairie seeds in this one several years ago, but they haven’t come up at all.  I think the non-native grasses make too thick a mat for them to grow through.

So last fall we had someone come in and spray the field with roundup.  It was a little traumatic – he slid on the steepest part, and dug a big gouge in the hillside.  But at least he didn’t tip over, and he did finish the spraying.  Then I threw out more seeds over the winter.

This spring the grasses – mostly Smooth Brome – look quite dead.  This is the way the field looks now. 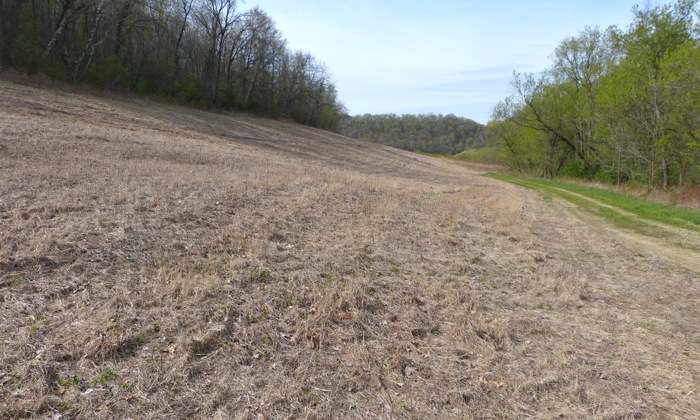 And some natives are poking up through the dead grass stems.  So far I’ve found violets, Wild Geranium, Jacob’s Ladder, and Wood Anemone.  None of these are things I’ve planted, so the plants – or the seeds – must have been there all along.

The wood anemones look a little battered – I think, being on an exposed hillside, they’ve gotten caught by some of the frosts. 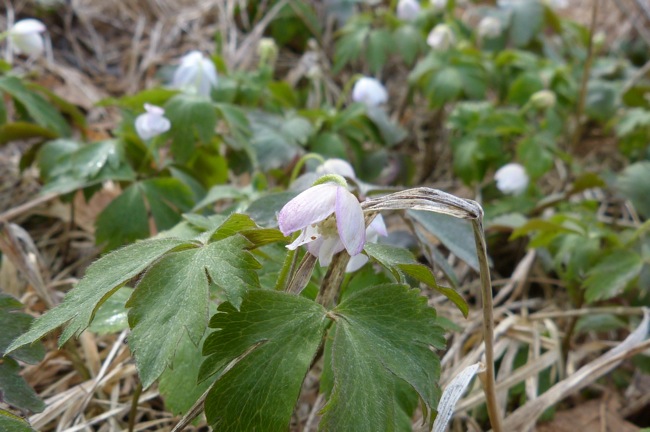 Jacob’s Ladder – not quite blooming yet. 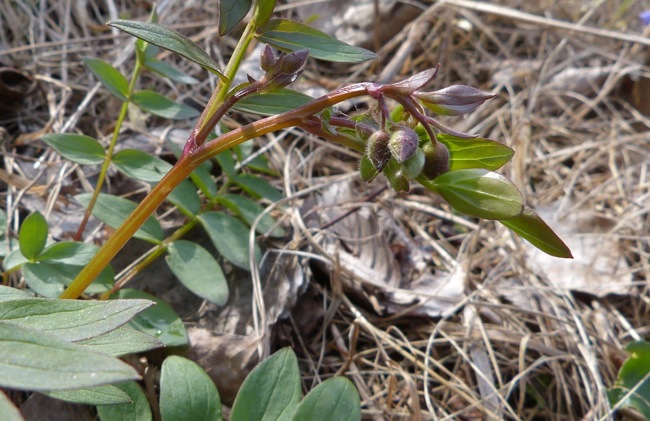 So I have great hopes for the rest of this new planting. I hope some of my prairie seeds will start coming up soon.

In other parts of the farm, the flowers are a little farther along. 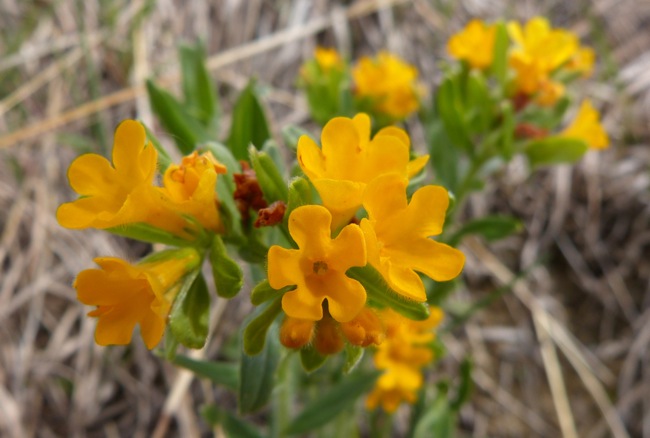 The Lupine near the house is almost in bloom – about a month early. 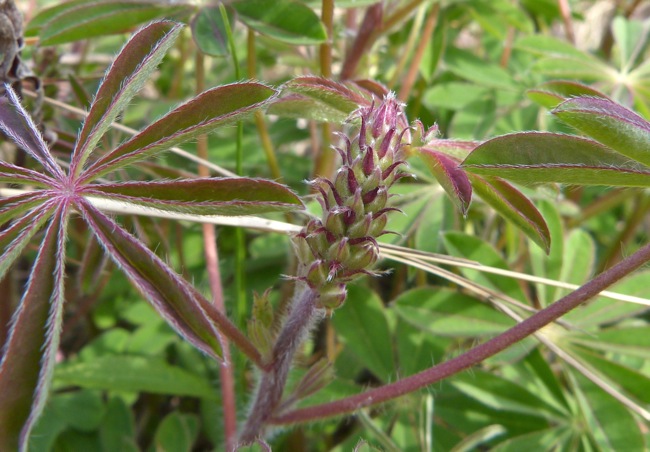 Jacob’s Ladder in the woods 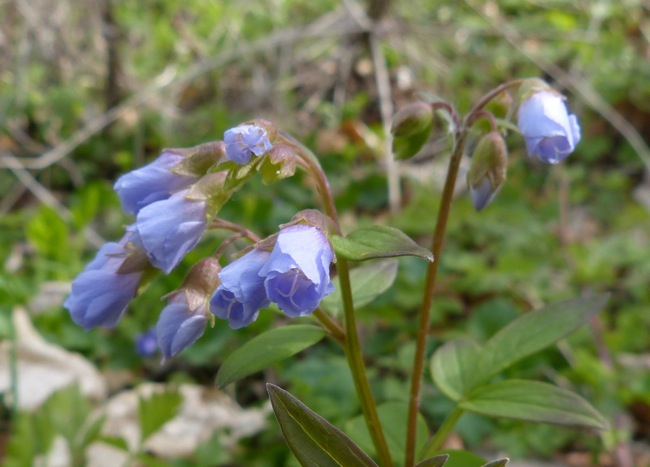 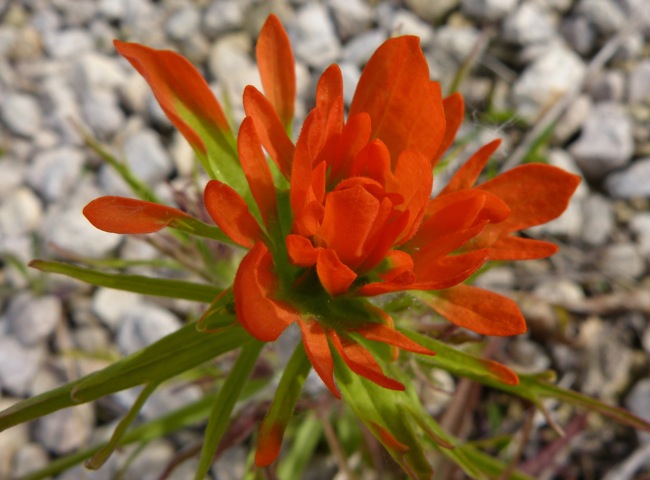 Birds Foot Violet – the moisture is frost that’s melted, but hasn’t evaporated yet. 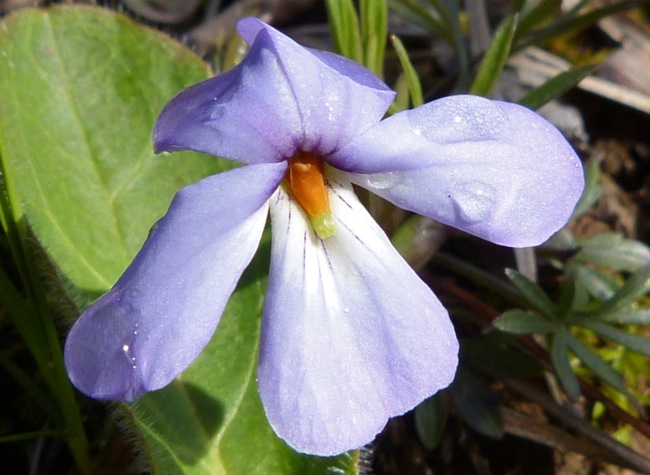 Here are a few of Mike’s cool landscape photos:  Spring at the Farm.

The Narrows – looking into the Cat’s Paw Prairie 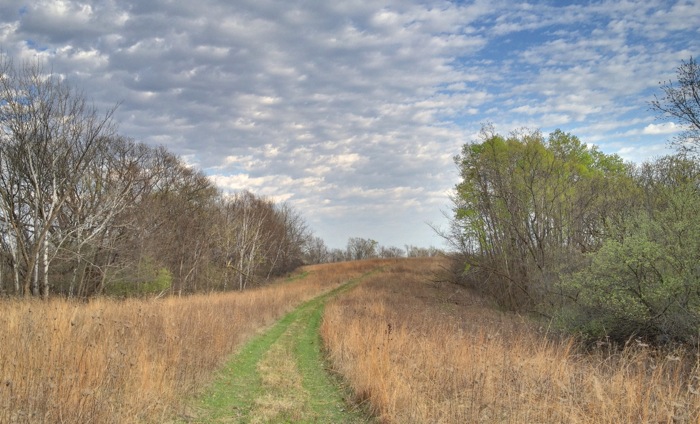 The newly mowed Knife Edge Prairie.  We mow this prairie early every spring. 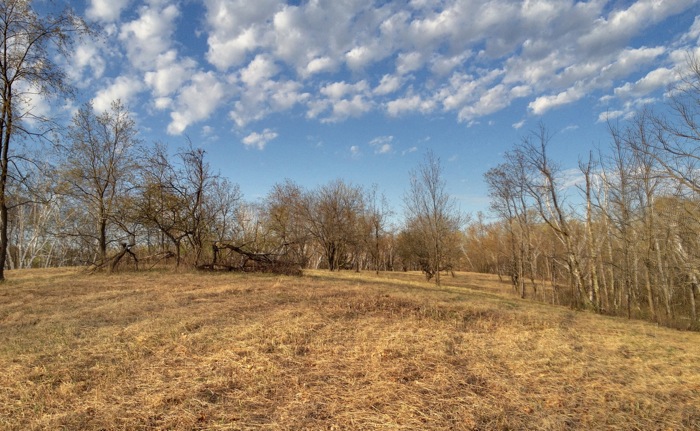 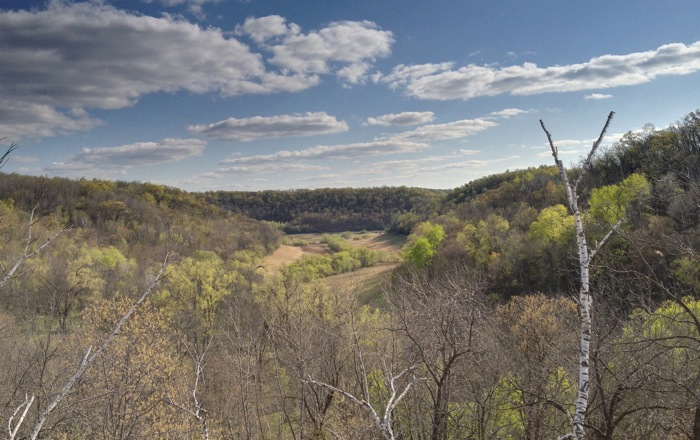 Center Valley – looking the other way – north from the road. 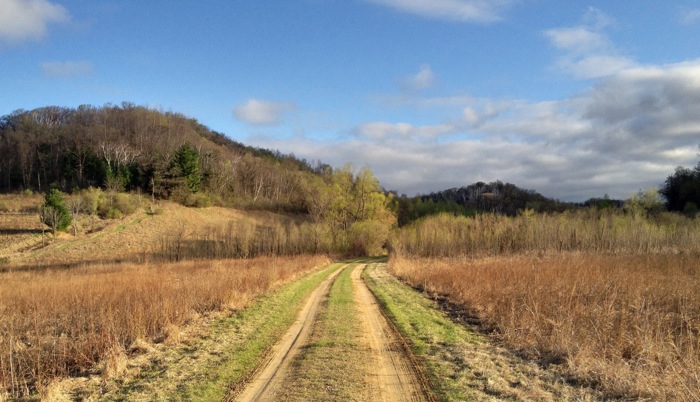 Praag Valley and our wetland 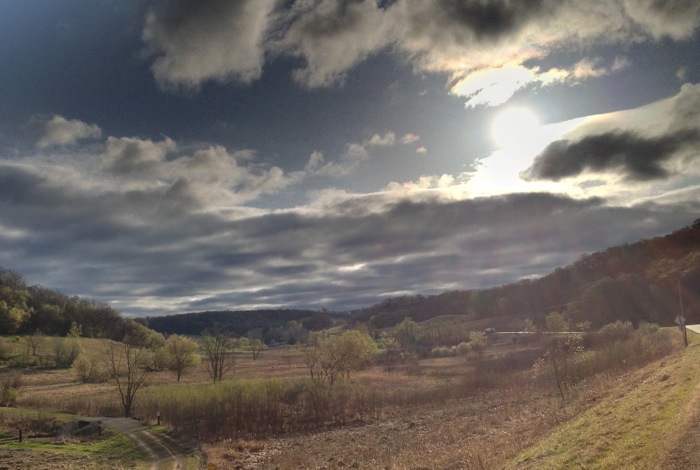