Rancho Naturalista is mainly a birding lodge, so the birds – around the lodge, at the feeders and in the jungle behind the lodge – were incredible.  I’m not a good bird photographer, so I didn’t take many bird photos, and the ones I have are all the most common species.

The first birds we saw were the hummingbirds.  There were hummingbird feeders everywhere, and each one had numerous birds buzzing around it almost all of the time.

The guides told us that the area around the lodge has 15 different species of hummingbirds, and if you go slightly farther up and down the mountain – but still in the same area – you could see 10 more species.

The bird on the left in this photo is a White-necked Jacobin;  the one on the right is a Rufous-tailed Hummingbird – two of the most common species.  The Rufous-tailed is quite aggressive, and makes a loud buzzing noise as it chases other hummers away from the feeders. 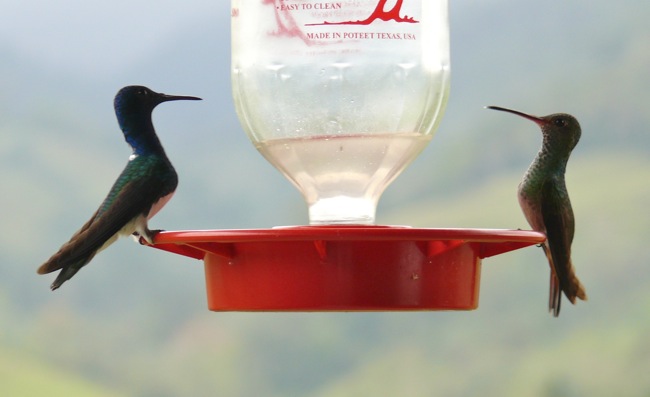 This is a bad photo of an interesting species – a Green Hermit.  It has a long white trailing tip on its tail. 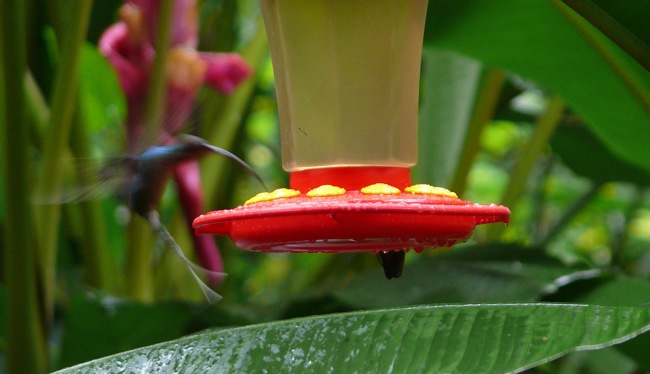 There were feeders and birdbaths all along the edge of the lawn, where we could watch them while while sitting on the terrace, or eating meals.  The guides sat with us at mealtimes, and were continually pointing out interesting birds. 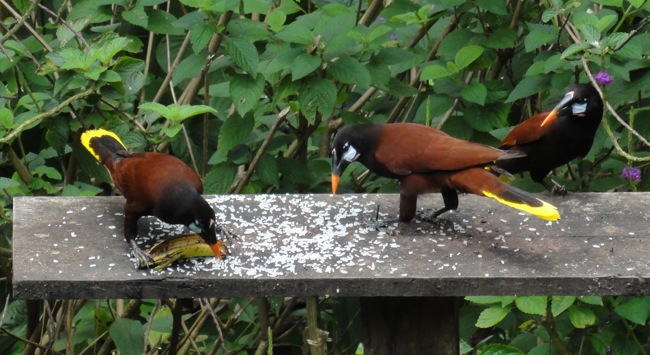 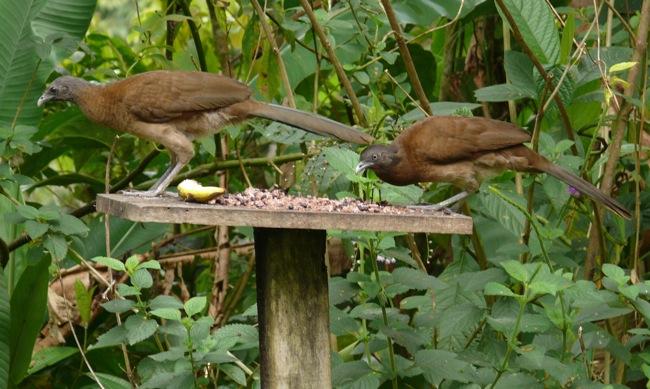 Great Tinamou – several people were very excited when we saw this.  It was along the trail, in the darkest part of the woods, but it stayed still until we were quite close. 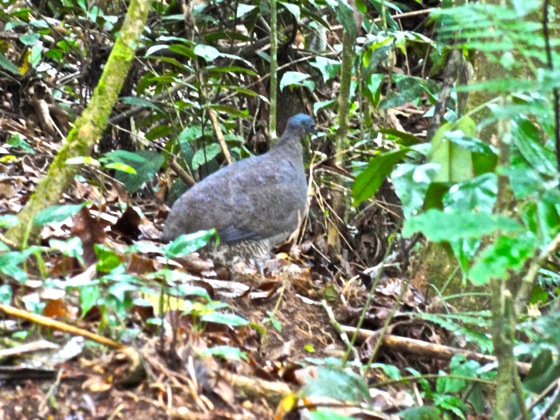 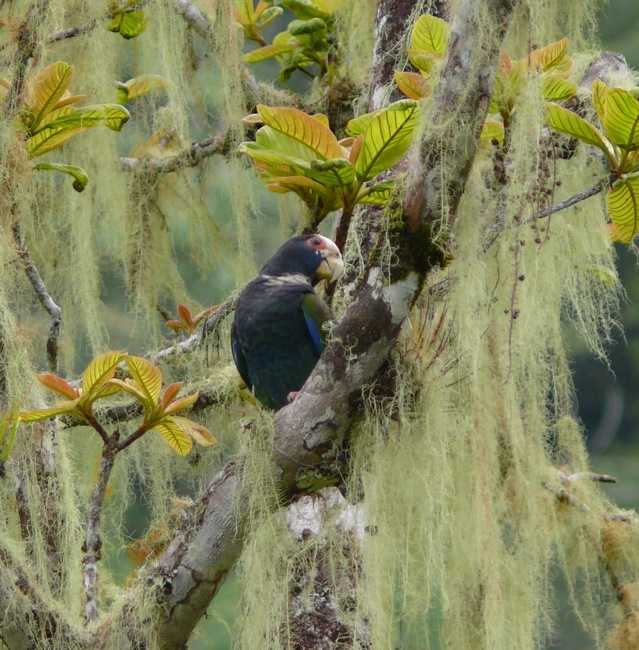 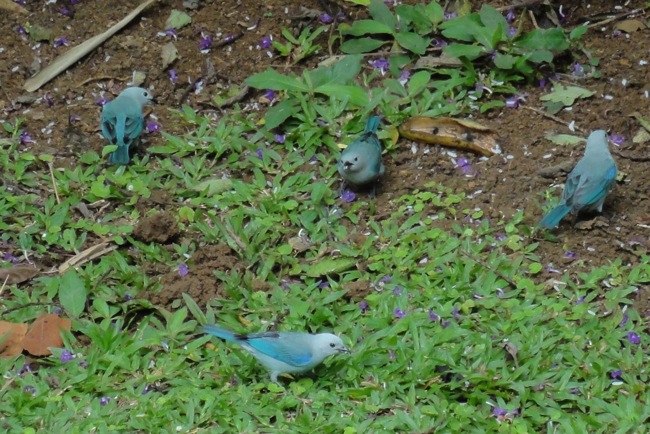 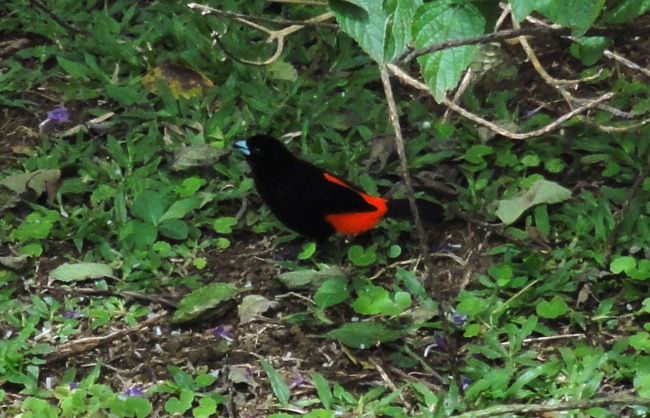 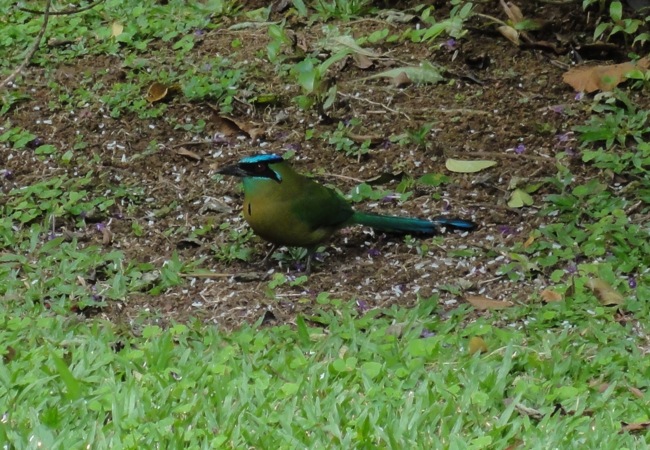 We saw lots of beautiful beetles, many of them at the moth lights at night.  Here are just a few.

This one is a click beetle.  The eyespots are luminous – they glow in the dark.  When we shone a flashlight on it, the eyes glowed, but after the flashlight was turned off, they would slowly fade out. 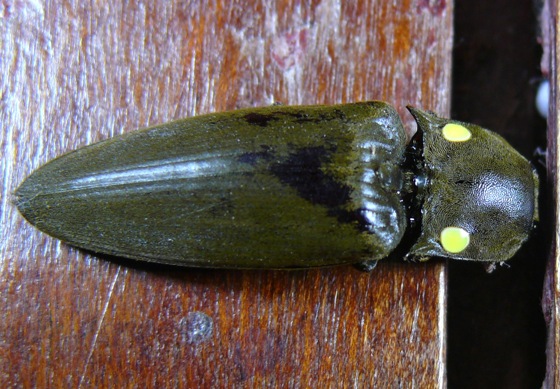 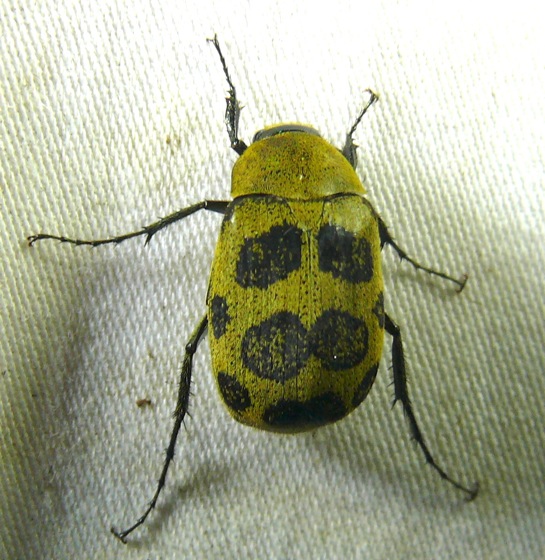 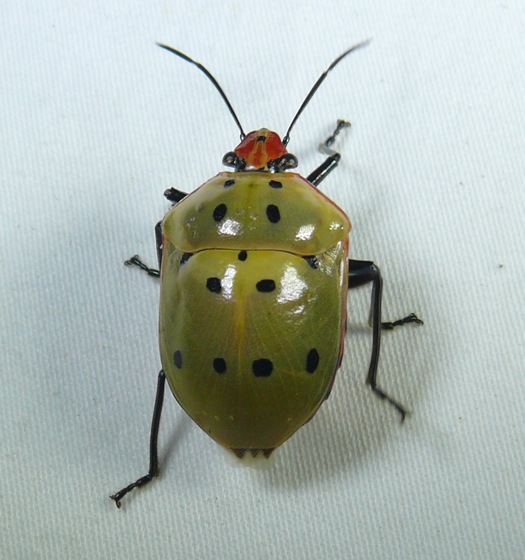 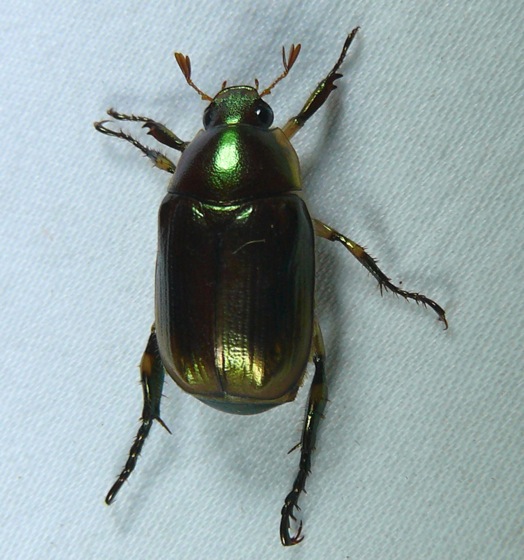 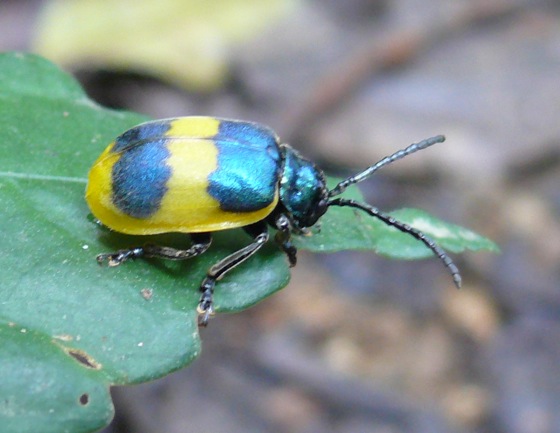 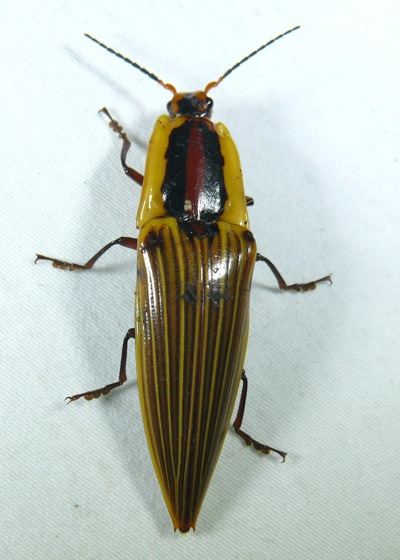 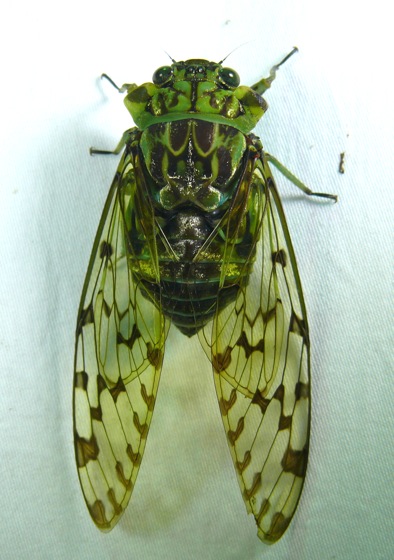 Many of the insects we saw were attracted to the moth lights.  In the morning, bugs and birds would show up to eat any creatures that were still hanging around. 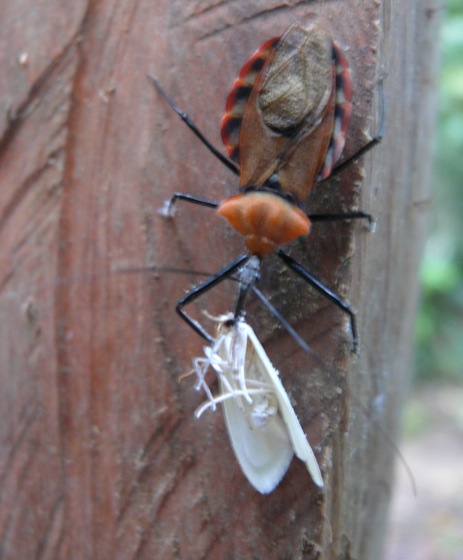 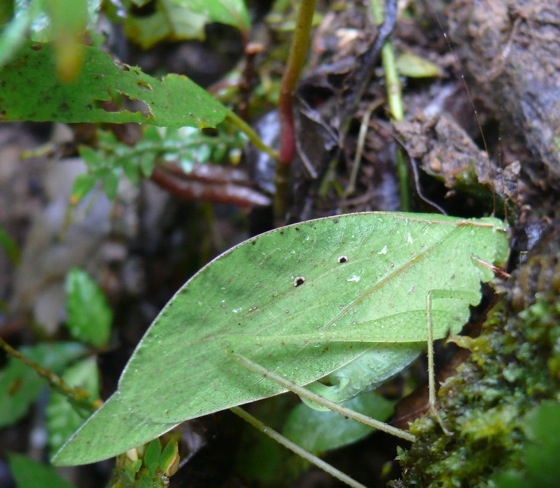 This isn’t a very good photo because I was nervous about standing in the middle of a line of moving ants.  But the “normal” looking ants were being guarded by these “armored” ants.  The armor was tan colored, and had wicked looking spikes on the head.  The armored ants were quite a bit larger than the others. 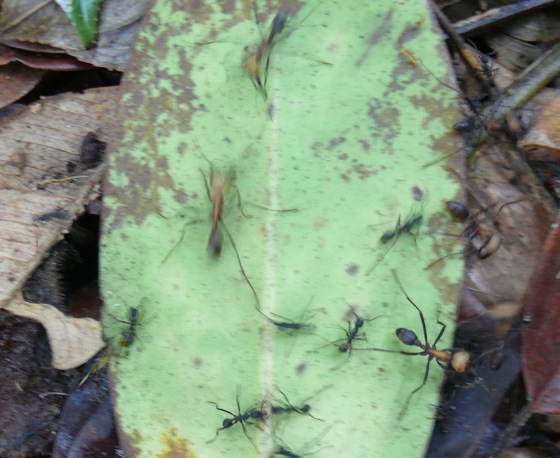 A fly that was interested in my bag of butterfly bait. 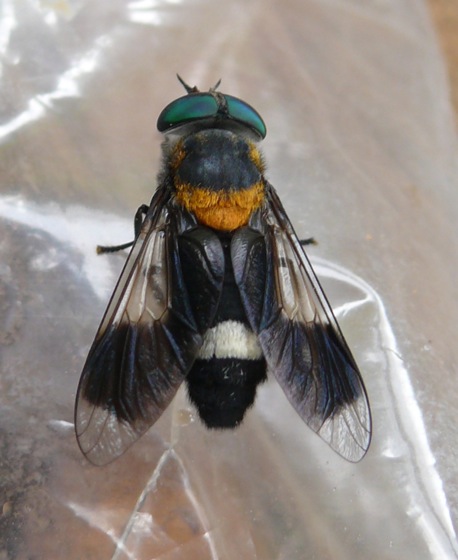 We saw quite a few frogs along the trails, but always in the darkest parts of the forest.  This is the only one we got a good photo of. 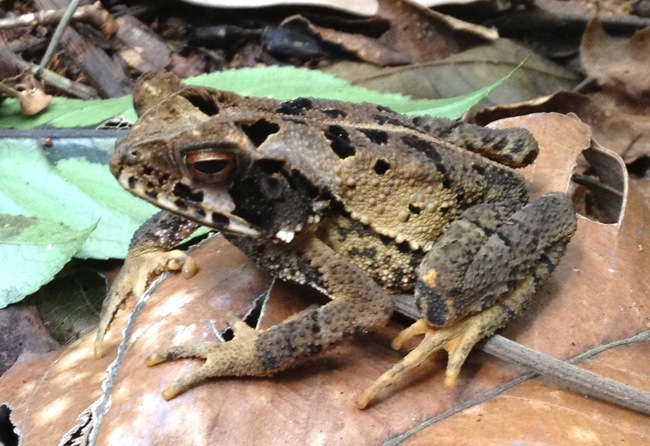 There were lizards everywhere – mostly very small ones along the paths.  This is one – only about 3 inches long including the tail. 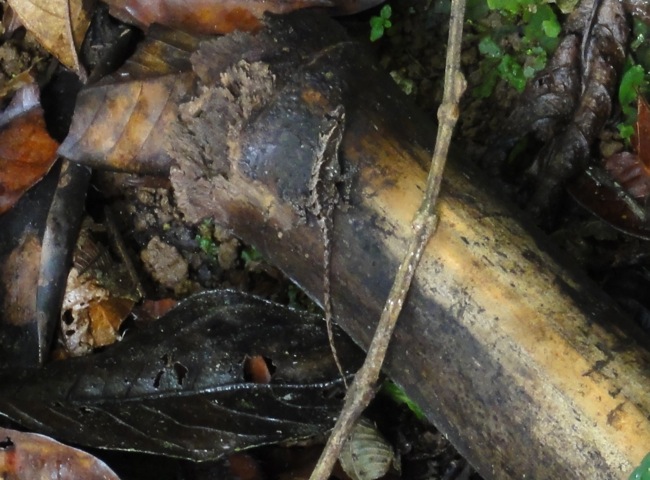 This is one of the lizards that lived in the yard under some of the planted shrubs.  They would come out and sun themselves on the path, and scurry for cover when we approached. 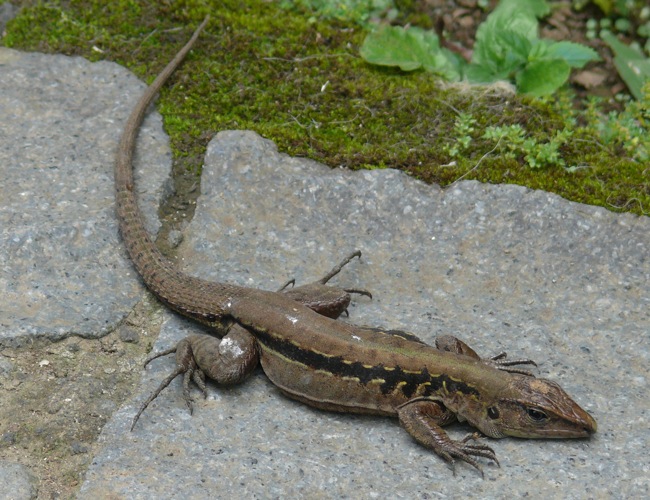 This guy was on a tree trunk at my look-out at the top of the trail.  It scurried up to this place where it could keep an eye on me, and then sat there until I left. 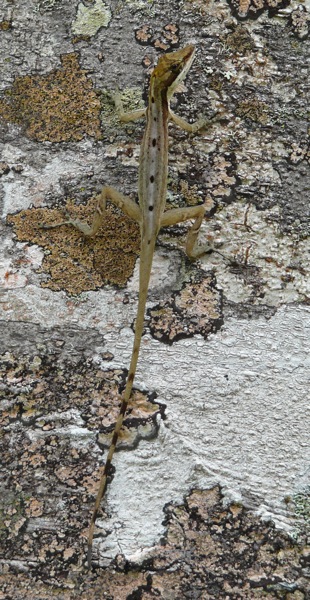 This is the one snake we saw.  Everyone warned us about snakes – to watch for them on the trails.  There are numerous poisonous snakes in Costa Rica, including the most dangerous – the Fer de Lance.  Fer de Lance are pit vipers, with very deadly venom.  Unlike many snakes, they are fierce, and will often attack rather than retreat when disturbed.

So we watched the trails carefully while we walked.

A few days before we left we spotted this snake just ahead of us on the trail.  Since we didn’t know what it was, we were very cautious about getting close.  Mike found a very long stick and encouraged it to move off the trail so we could get by.  I checked with Tim Paine – a friend who knows about neo-tropical snakes, and he identified it as a Hog Nose Viper (Porthidium nasutum).  He says its venom is fairly mild – as viper venoms go, and that it has a mellow disposition. 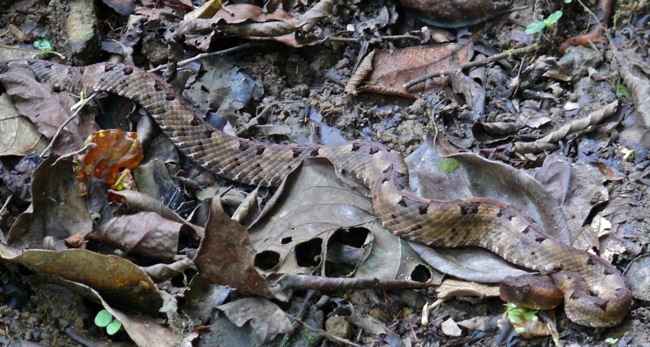