All that Mike and I knew about the Okefenokee Swamp was from reading Pogo when we were kids. We remembered pictures of Pogo poling his flat-bottomed boat through wet swampy pools and between huge trees draped with Spanish moss.

That’s pretty much what the swamp actually looks like. It’s a huge place – the National Wildlife Refuge is about 400,000 acres, most of it designated as a National Wilderness Area. We stayed in Steven C. Foster State Park, which is at the end of an 18 mile dead end road almost in the center of the park. (The swamp is the source of the Suwannee River, which was mistakenly spelled Swannee River in the Steven Foster song.) The campground was nearly empty most of the time. It was incredibly quiet, and the only disadvantage – especially for Mike – was that it didn’t have any cell phone or Internet access.

Sunrise in the campground 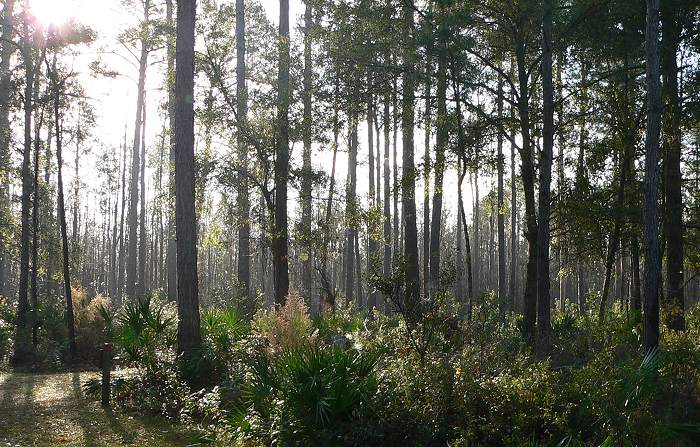 The park has a nice little marina, with boats for rent, and small pontoon boats that they use to take people on tours. 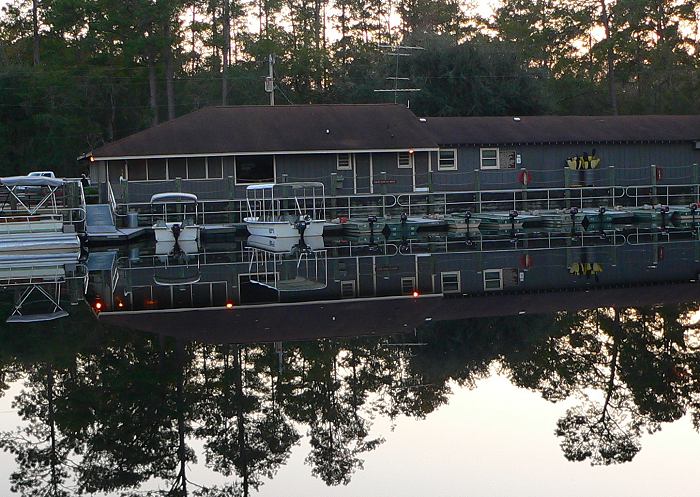 We rented a boat – a lot like Pogo’s boat except that it had a small motor. We putted out the canal that connects the marina with Billy’s Lake. 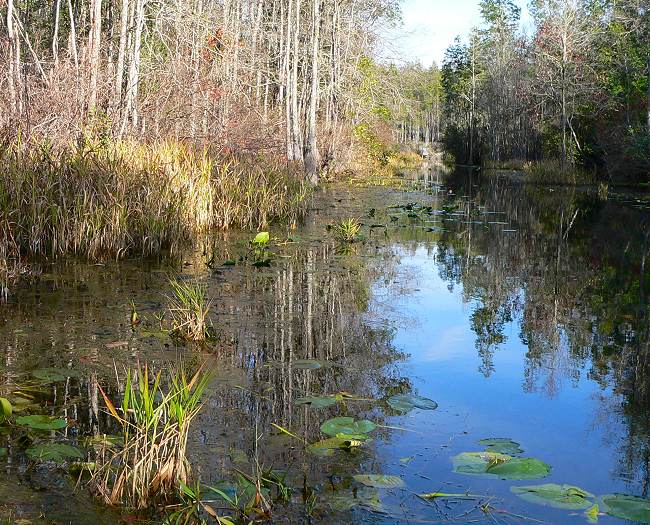 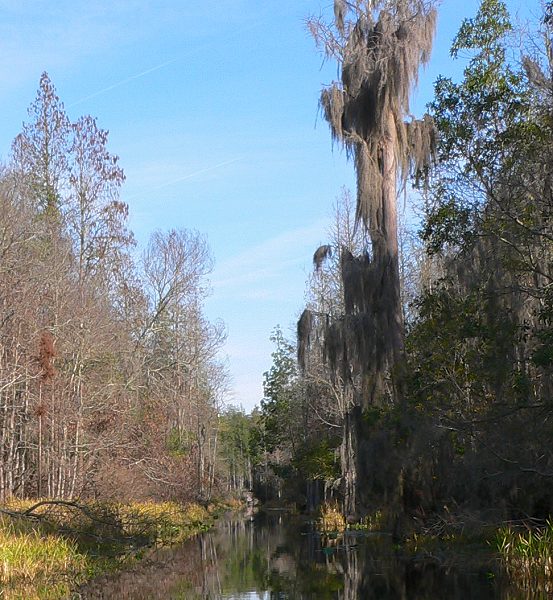 Along the shores of Billy’s lake there are tall cypress trees with White Ibis and Vultures roosting in the branches. 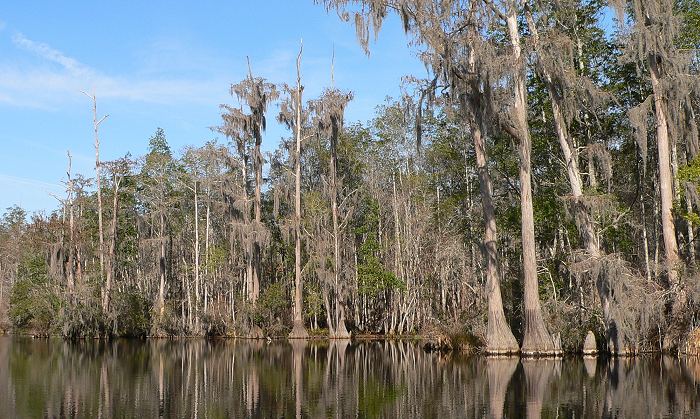 (Cypress trees are deciduous – they lose their needles in the winter – which is why these trees look so bare.) 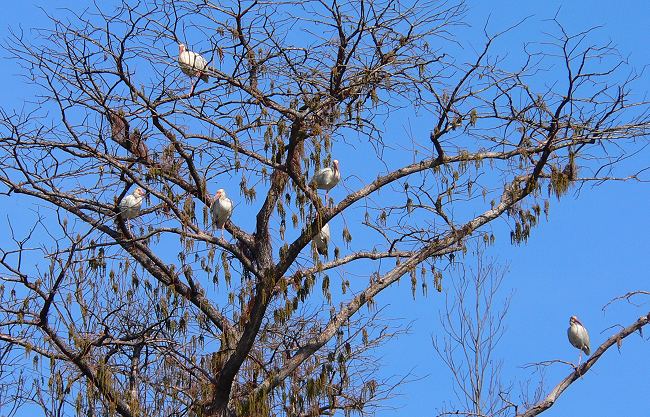 We saw our first alligators along the bank.

And lots of big turtles sunning themselves on logs. 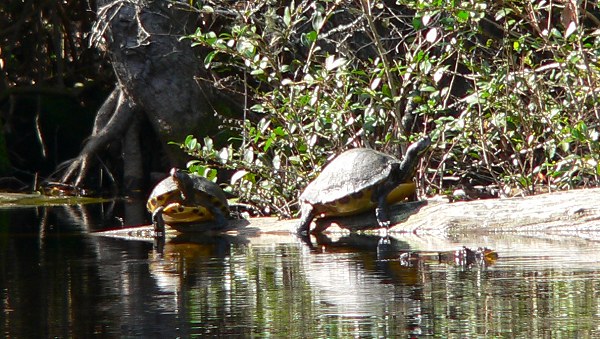 The Okefenokee is called a “black-water swamp” because the water has such a dark color. It’s very clean, but it’s full of tannin from the plants that grow in it. The black color of the water gives the reflections an unusual look. 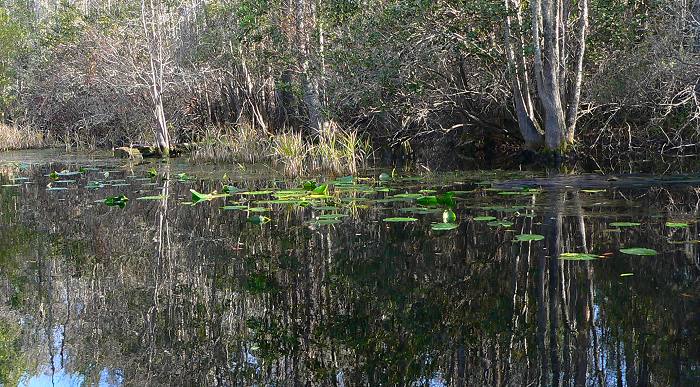 One of the places we explored was a narrow river that eventually leads to Minnie’s Lake. We could only go about a mile – the rest of the river was closed because there had been a big fire last spring, and the dead, burned trees were falling into the river. After the park folks clear the trees it would be fun to follow the river all the way to the lake – about nine miles. It’s a very narrow channel, winding between the roots of cypress trees. 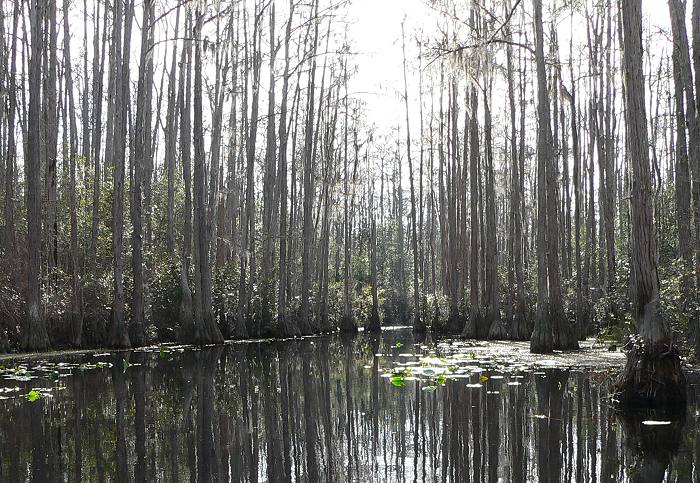 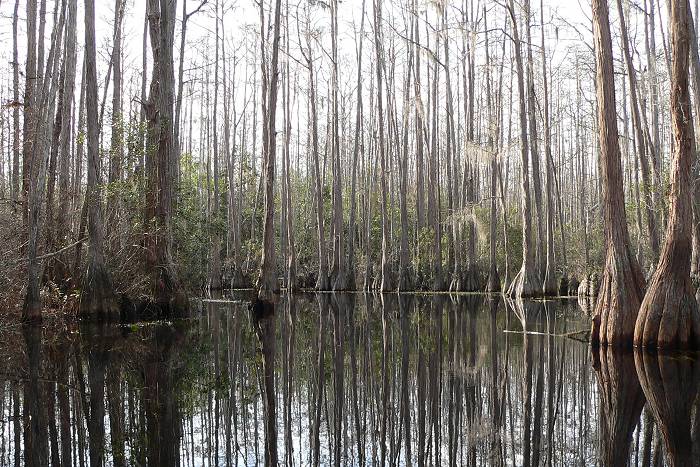 There’s a short boardwalk through the swamp near the marina. Lizards hang out on the railings, and jump to the nearby trees. Here’s an anole – a small brown lizard. 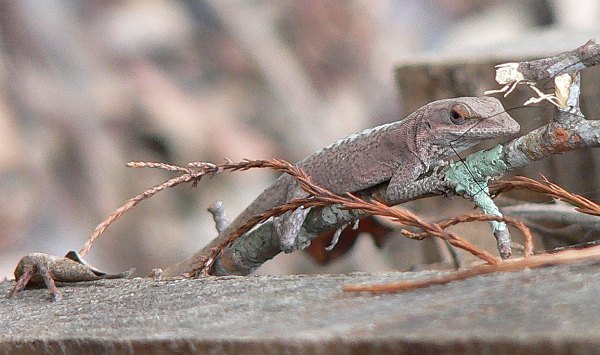 And all kinds of interesting spiders make webs in the trees, and between the trees and the boardwalk.

This spider is called a Crab-like Spiny Orb-weaver. It makes large round vertical webs – a foot or more in diameter – and sits in the middle waiting for its prey. 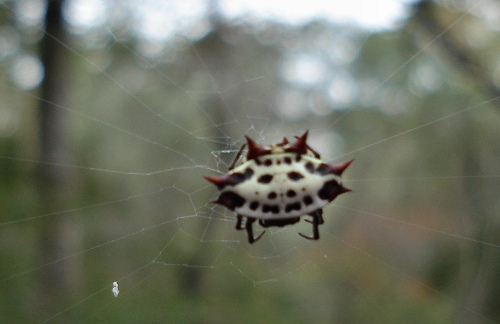 This next spider is in a family called Long-jawed Orb-weavers. They make horizontal webs and hang beneath them. I think this one is called an Orchard Spider (Leucauge venusta) 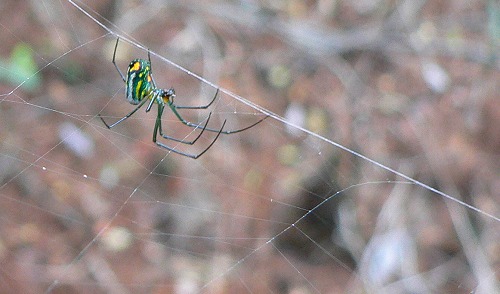 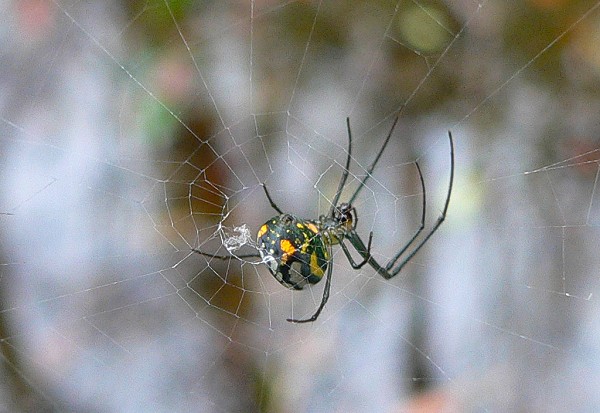 I met another photographer while I was checking out the spiders. We talked about the animals we’d seen and we both took pictures of the spiders – his is much better than mine. Here’s a link to his website with his spider photo (he turned the photo upside down so the spider looks like it’s on top of the web), and some other photos of the Okefenokee. I especially like the wide one of the cypress trees in the swamp.

On my morning walk in the campground I saw more spiderwebs. There were dozens of them in all the trees and bushes. 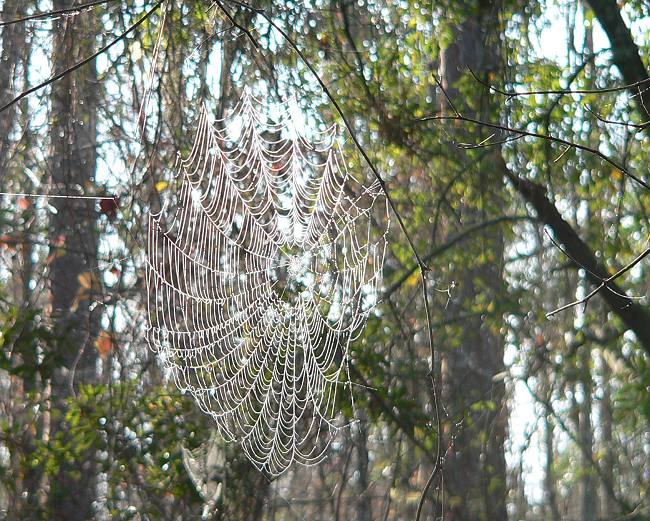 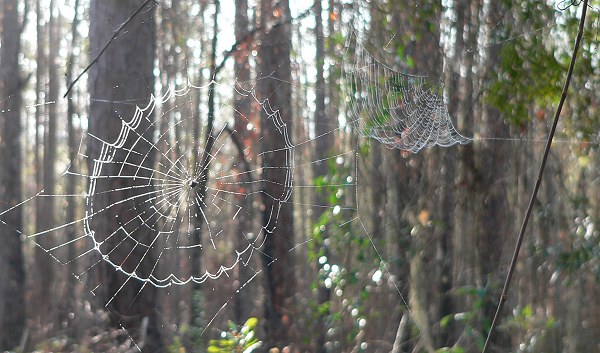 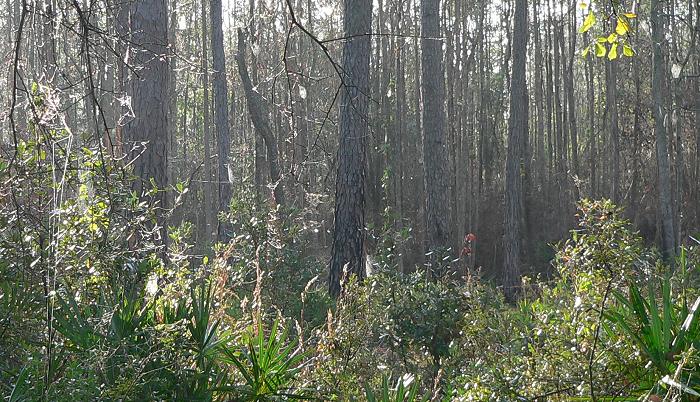 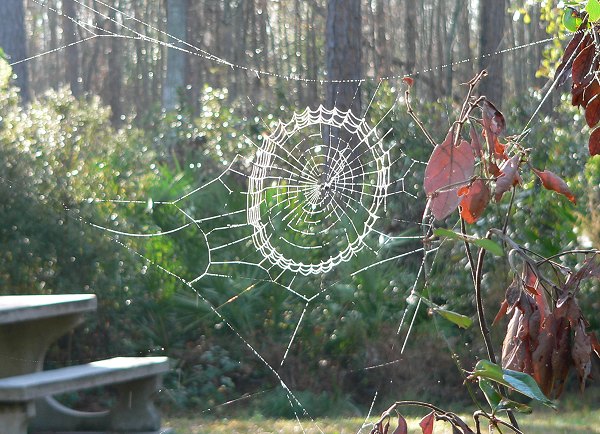 The fire in the spring of 2007 burned much of the refuge – the bottoms of the tree trunks are blackened from that fire, but the palmettos and other plants are growing up around them. 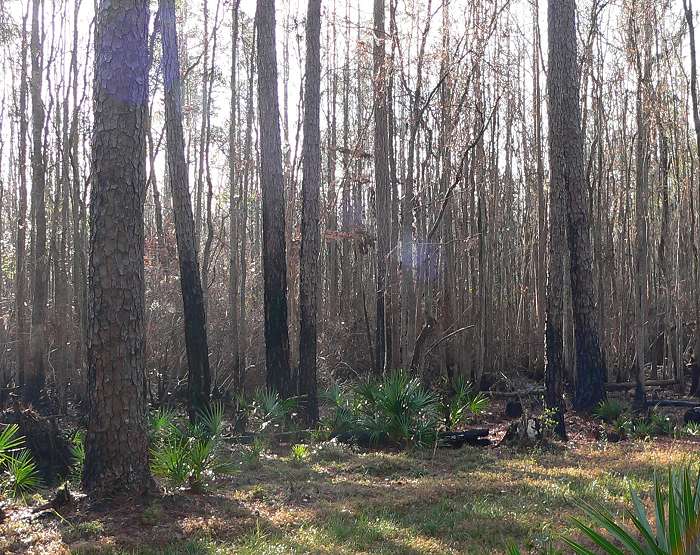 Fire is a natural part of the swamp ecosystem, and fires are common in dry years.

Slash Pines and Live Oaks grow in the campground and in the drier areas of the park. When the pine needles fall, they catch in the leaves of the shrubs below and give them a whiskery look. 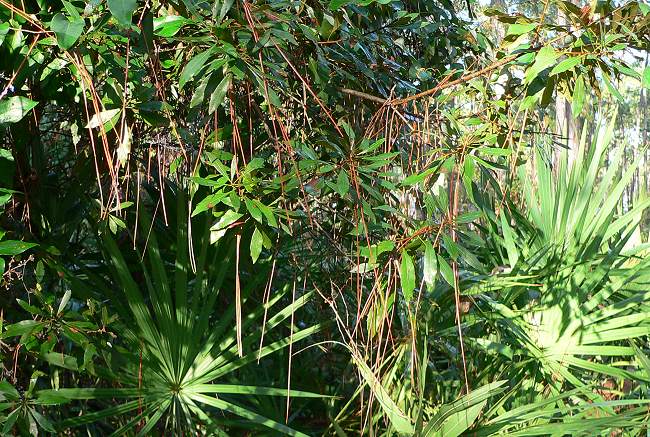 Spanish Moss grows on most of the cypress trees and the Live Oaks, but not on the pines. It isn’t really a moss – it’s in a family of plants called Bromeliads which also includes pineapples. Spanish Moss is an epiphyte (or air plant) – which means that it uses other plants for support, but not for nutrition. It gets its nutrients from air and rainwater – the narrow leaves are covered with gray fuzzy scales that help to trap water. 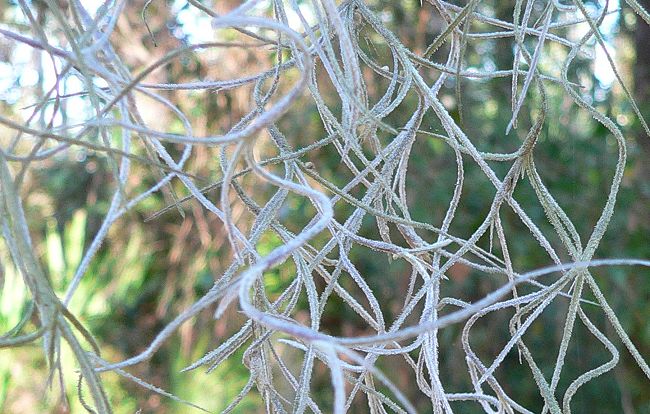 A logging company logged many of the large cypress trees in the swamp in the early 1900s. Some remnants of the logging camp are still there but the land is being restored to native habitat. This is one of the huge Live Oaks in the camp area. 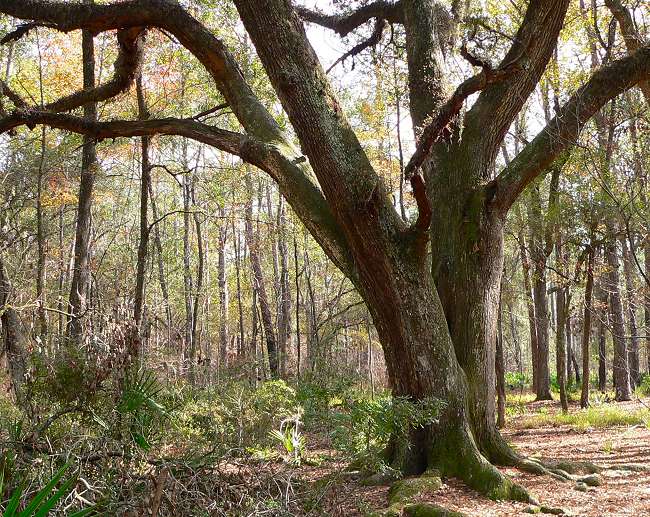