I haven’t done a blog entry in a long time because I haven’t been taking many pictures. It’s been raining nearly every day and I’ve been taking some very wet walks.

The National Weather Service says that the Twin Cities has just hit a record for rainfall for the three months of August, September and October – 18.98 inches. (The last time it was nearly as wet during those months was in 1900.) And we still have a week left to go in October.

I just got a note from Jackie saying that in Praag Valley – our valley – since August 8 we’ve had 26.5 inches of rain! Her comment was “Glug, glug, glug.”

The ladybugs haven’t been a terrible problem this year – yet. Usually they come out on warm sunny October afternoons – but most of our afternoons have been cloudy and cool. We did have a few days when they were a problem, but not as bad as other years. 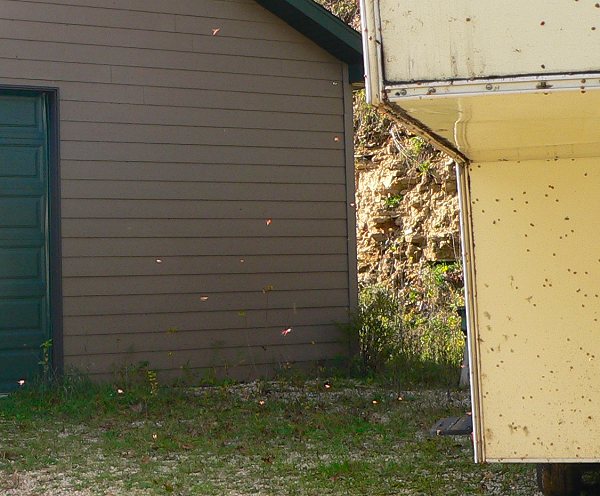 It’s hard to see them in a photo – I have to catch them when they’re backlit by the sun and against a dark background. Here’s the best I could do. You can see red specks in the air, and lots of bugs on the front of the camper.

When they’re at this stage they fly everywhere and land on everything, including people, and they bite!

I’ve been cutting brush on Indian Grass Point – trying to clear it so the prairie plants will have a chance to grow. This is the kind of brush I’m working on – mostly prickly ash and Sumac. 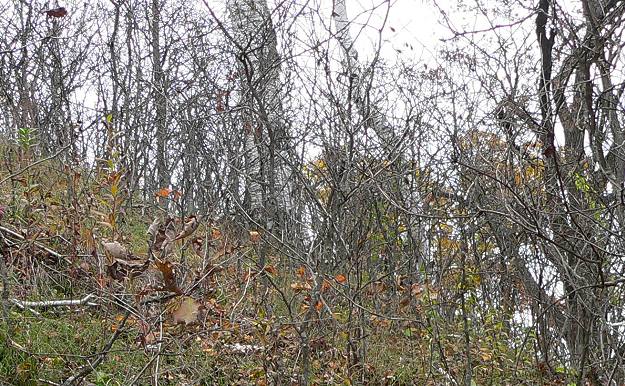 This is looking up at the point after a few hours of cutting. It’s getting to look more and more like a bluff prairie. 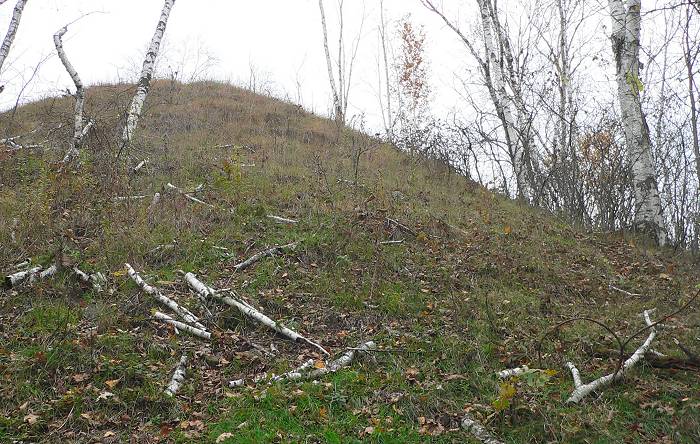 I have to spray the stumps of the bushes with Roundup, so I usually sit or kneel on the ground while I’m working. It’s a good place to see what’s growing under the brush. I found small plants of Harebell, Hoary Puccoon, Pussytoes, Prairie Dropseed and Little Bluestem, so I think it will recover pretty quickly.

Maybe because of all the rain, the fall colors are especially brilliant this year.

There’s a Red Maple on the bluff above the house that is brilliant red – almost as bright as a Sugar Maple. 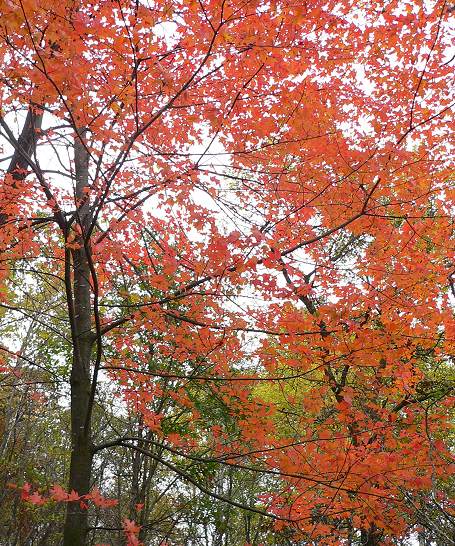 The American Bittersweet has turned color too. Now that many of the leaves have fallen from the trees, it’s easy to spot the bittersweet vines with their bright yellow-green leaves. 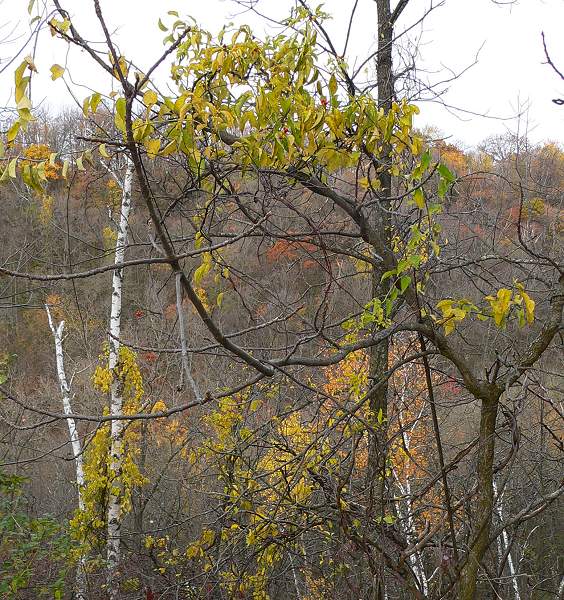 There are still a few butterflies flying on warm days – Mourning Cloaks, Sulphurs, and this Red Admiral that I saw on Sumac Point. 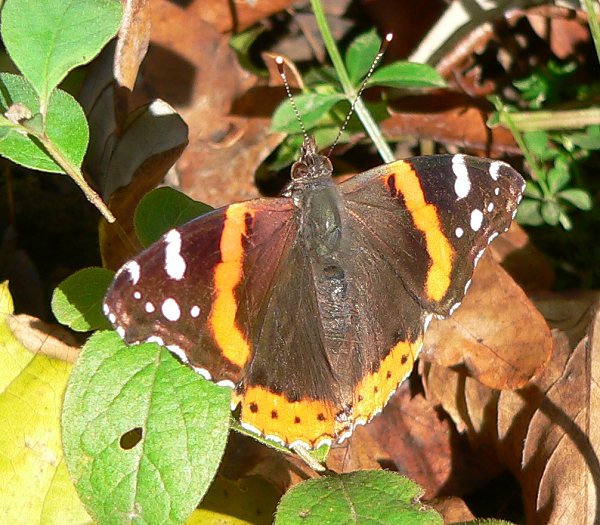 Here’s a new, large animal den right in the middle of one of my paths down from Big View Prairie. 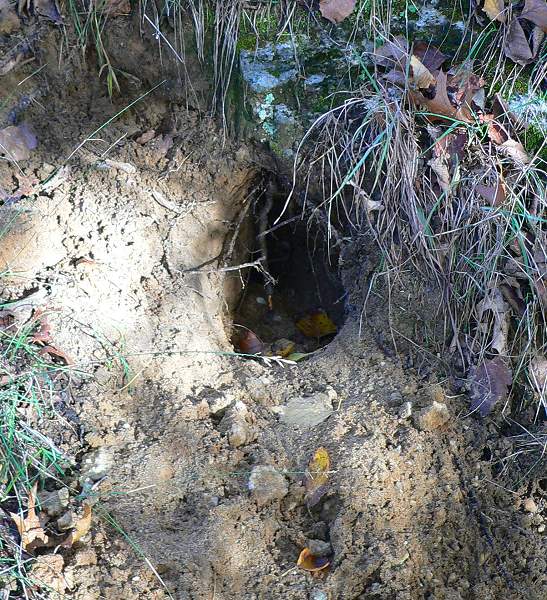 Most of the apples on our trees have fallen or been eaten by deer. The only ones left are hanging high up where the deer can’t reach. Our trees must have grown from seeds, because the apples on each one are different. This one has very small bright red apples. 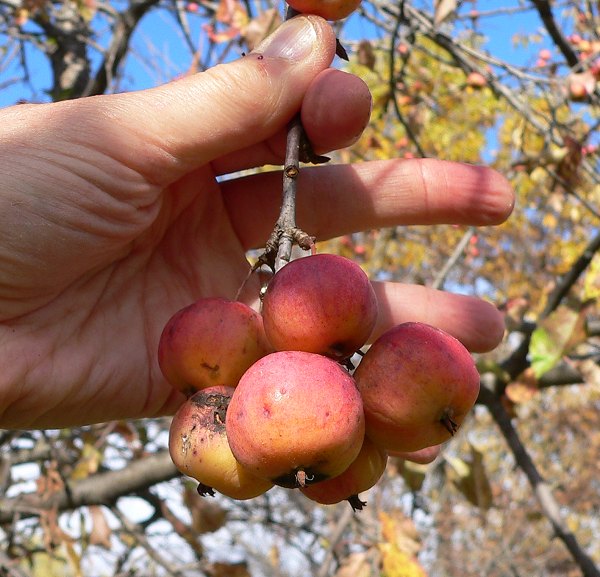 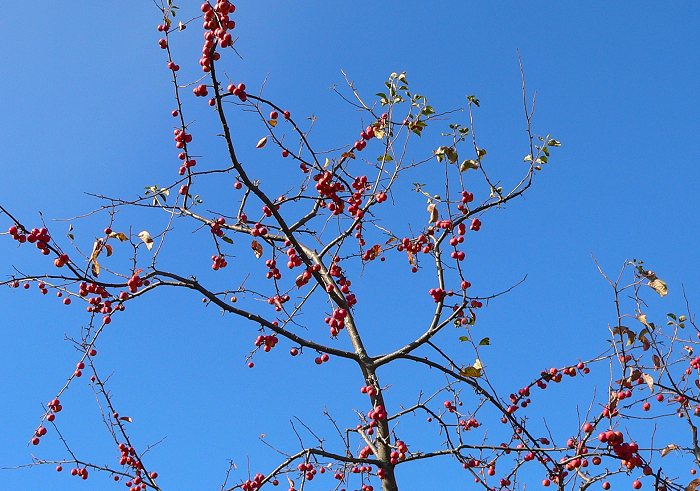 Only a few flowers are still blooming. Here’s a late Fringed Gentian in East Center Valley. 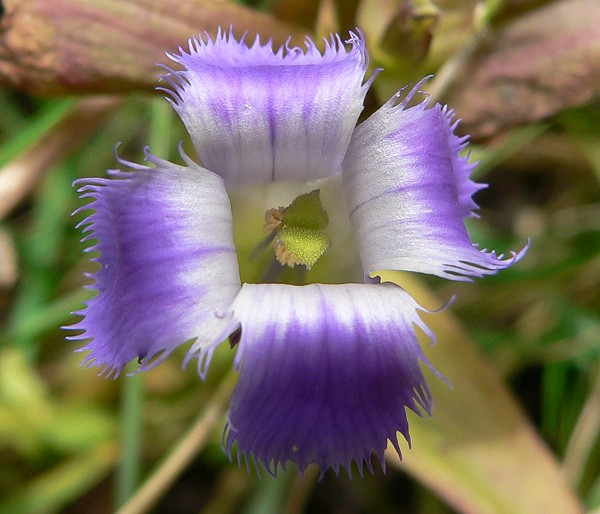 It’s so much fun taking pictures of the beautiful colors in the trees – these are some of the fall scenes at the farm.

These Aspens on Sumac Point are the ones that Arlene helped me girdle last spring. 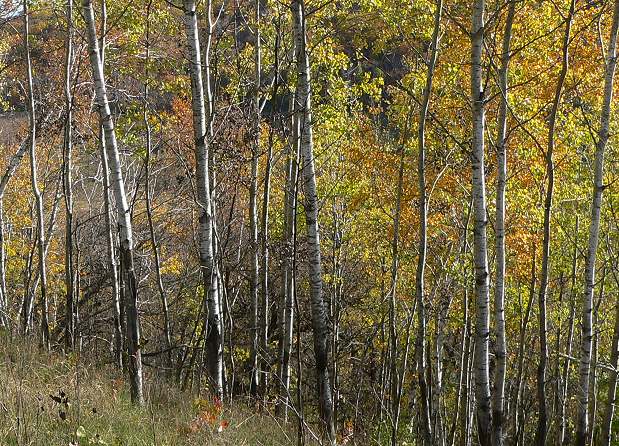 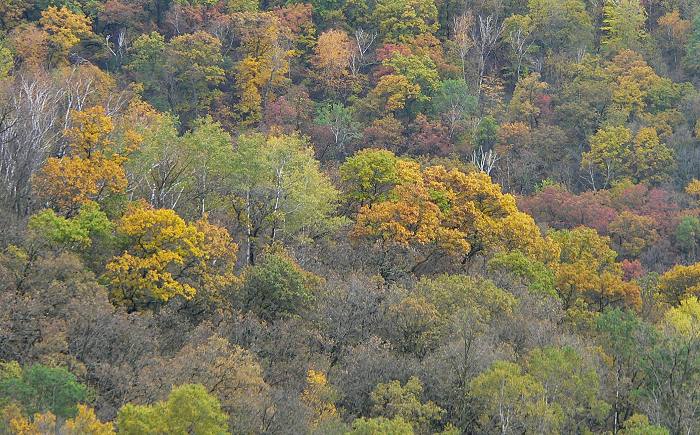 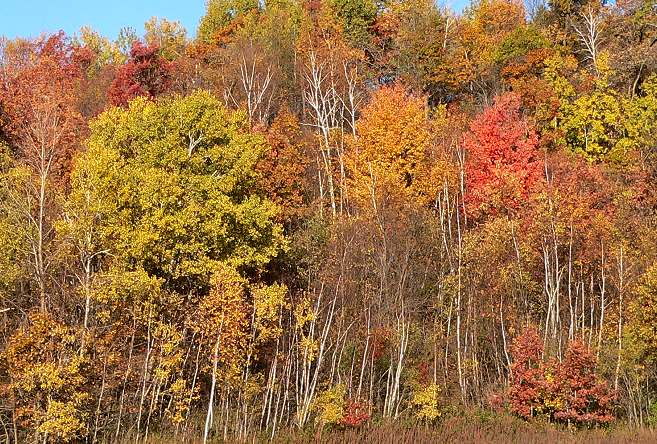 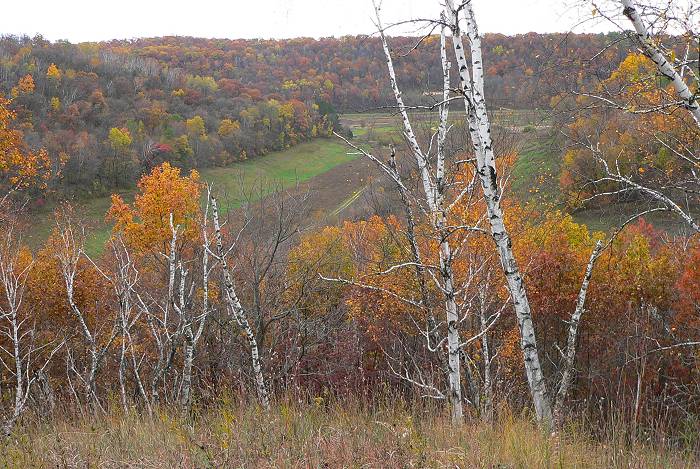 Looking through the leaves on Pine Point 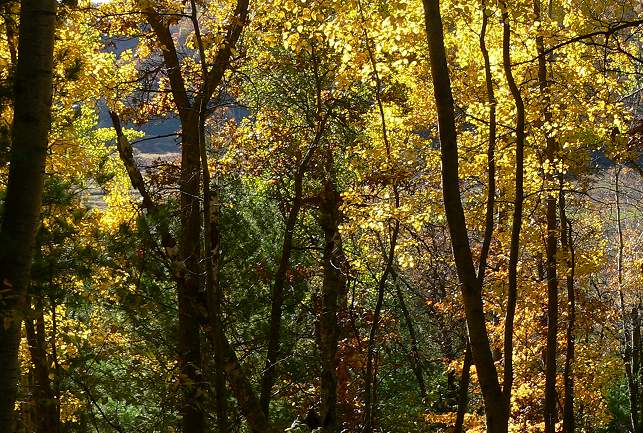 It’s sometimes difficult to show how steep the slopes are on our hills. This is the front of Big View Prairie sloping down to the trees at the top of Pine Point Prairie. 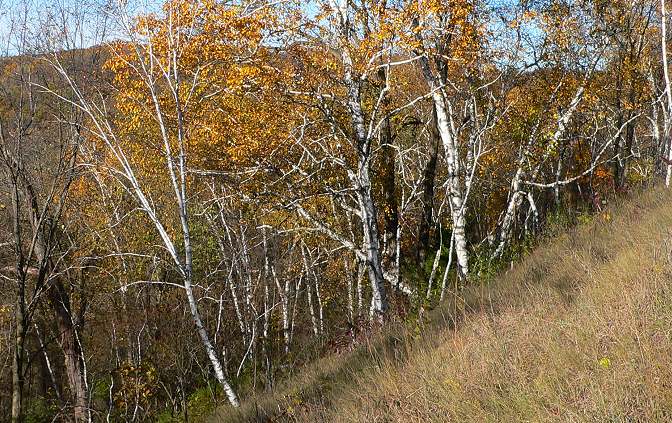 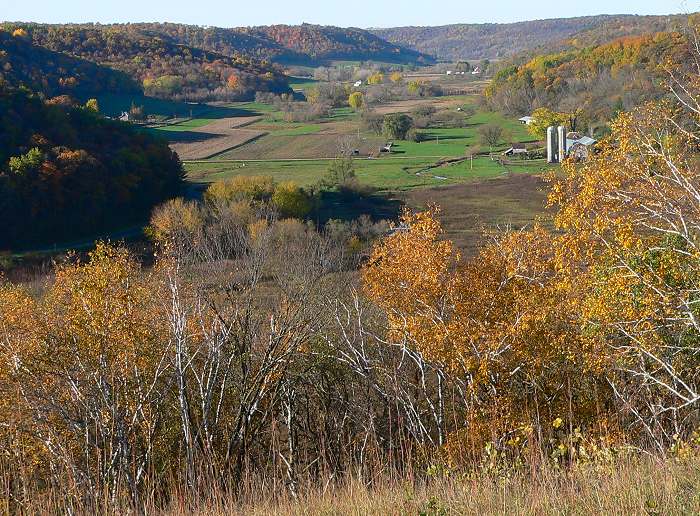 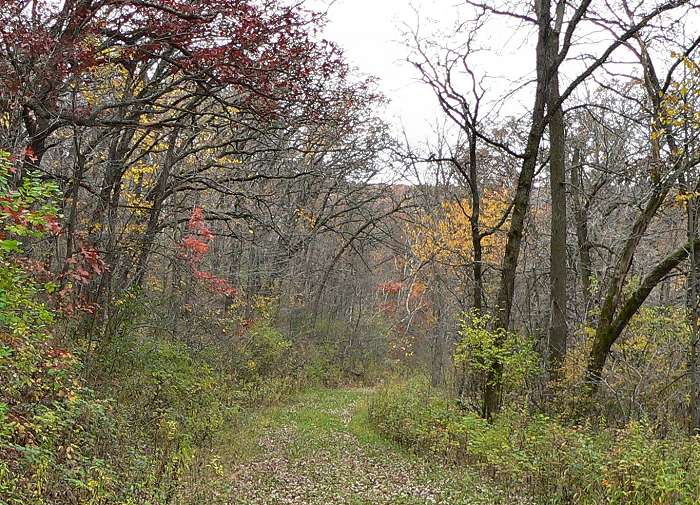