Summer has definitely arrived now – the forecast high for today is 99 degrees.  Not good weather for working outside – so I’m catching up on computer projects.

Mike was out of town for 9 days, and I expected to have a quiet time at the farm – but it turned out that all kinds of people came to visit.  Some Twin Cities friends came to explore and relax, MJ came to do bugs, and some birders came to visit our grassland birds.

I’d been hoping to someday get a knowledgeable birder to walk through Western and Buffalo Ridge Prairies and figure out which grassland sparrows we have there.   It’s our largest prairie area – more than 70 acres of planted prairie.  The oldest part was planted 7 years ago, and the youngest 4 years ago.   In the last few years we’ve noticed lots of nesting sparrows.   Some we were able to identify – Clay-colored Sparrows, Vesper Sparrows, and Field Sparrows – but there were others I just wasn’t sure of.

There has been a lot of concern about the decline in populations of grassland bird species – birds that nest in grassland habitats.  More and more grasslands in the Midwest are being planted into crops – especially now that corn is being used to make ethanol.  The birds that depend on grassland habitats can’t find places to nest, so their populations are declining dramatically.  Grassland birds include many native sparrows, Meadowlarks, Prairie Chicken, Bobolink, Northern Harrier, Dickcissel and Horned Lark.

We hoped that by returning our formerly cropped fields to prairie, we would start attracting some of these grassland species.

Two great birders came to visit – John Romano and Ann Geraghty – and we had a nice – slightly rainy – walk through the prairie.  They confirmed that we have some wonderful grassland sparrows:  Clay-colored, Field, Vesper, Savannah, Henslow’s, and Grasshopper Sparrows!  And Dickcissels.  Henslow’s Sparrows are considered threatened in Wisconsin, and Grasshopper Sparrows, Field Sparrows, Dickcissels, and Vesper Sparrows are all listed as species of special concern.

We also walked along the road to see if we could see any good wetland birds, and we heard the Yellow-breasted Chat calling – also a special concern species.  A great success! – I really appreciate their help.

A few weeks ago we had two pairs of birds – simultaneously – building nests on either side of our porch.  Phoebes built on the north wall, next to our front door. 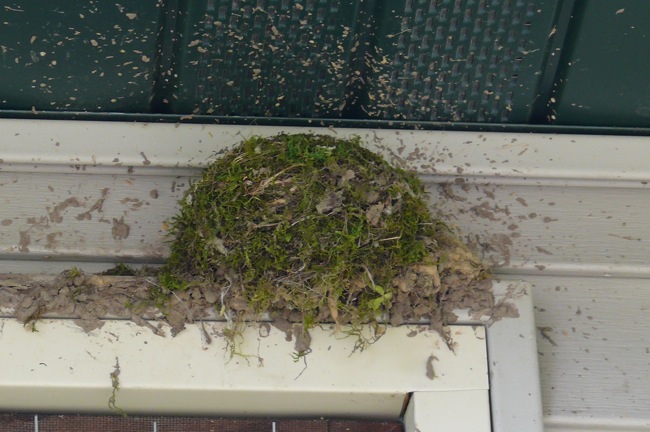 and Barn Swallows built on the south wall. 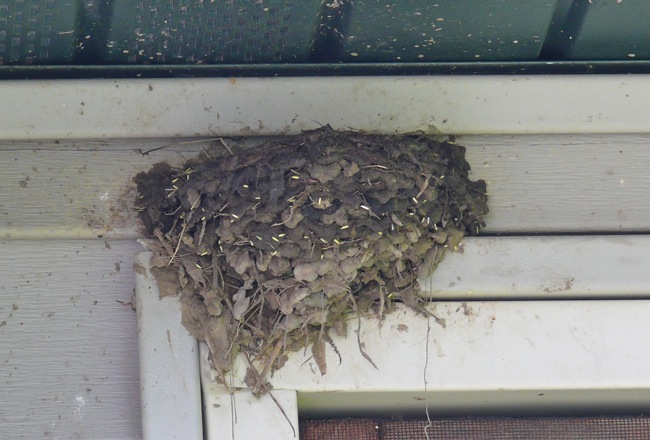 Now they’re busily laying eggs – it should be pretty noisy when the babies hatch.

Another adventure this week is that a friend gave me some Buck Moth caterpillars – Hemileuca nevadensis.  Buck Moths are in the Saturniidae – the same family as Cecropias and the other Giant Silk Moths that I raise.  I now have a cage overflowing with caterpillars – at least 100 of them. 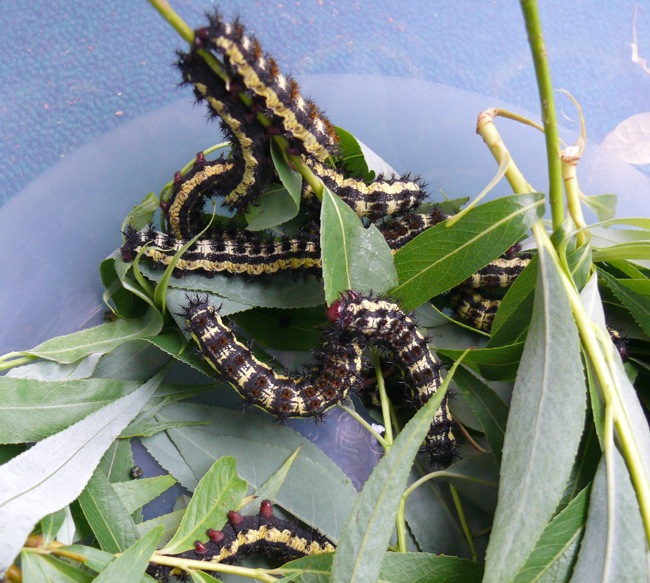 They’re very active caterpillars – they never seem to stop moving.  Whenever I open the top of the cage, there are a dozen or so waiting around the top edge, ready to crawl out. 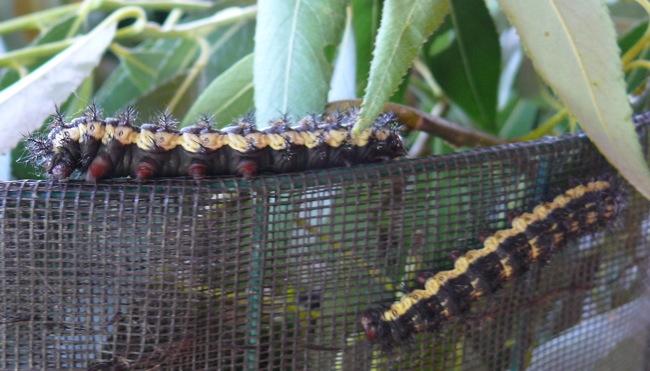 The caterpillars have spines that sting – it feels like the sting of nettles – so I wear gloves when I need to change their leaves or recapture wandering ones. 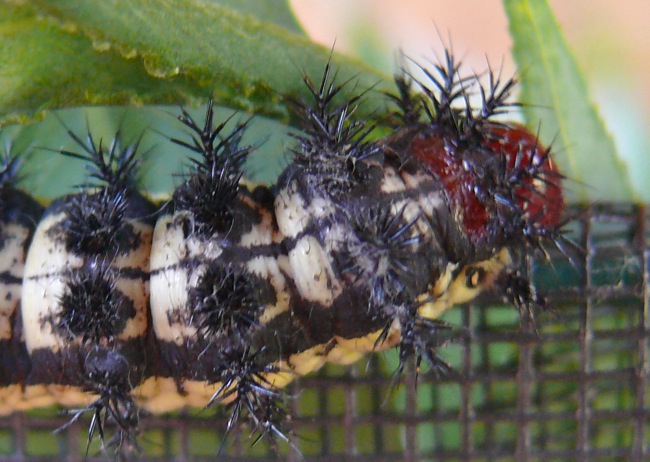 Interestingly, they leave traces of the stinging chemical on the branches they walk on, so you don’t even have to touch the caterpillars to get stung.

They’re getting pretty big and eating a lot – willow leaves – so I’m hoping they’ll pupate soon and give me a rest.

All of my other Giant Silk Moths have finally hatched.  They were very late this year – possibly because the weather this spring has been so cool. 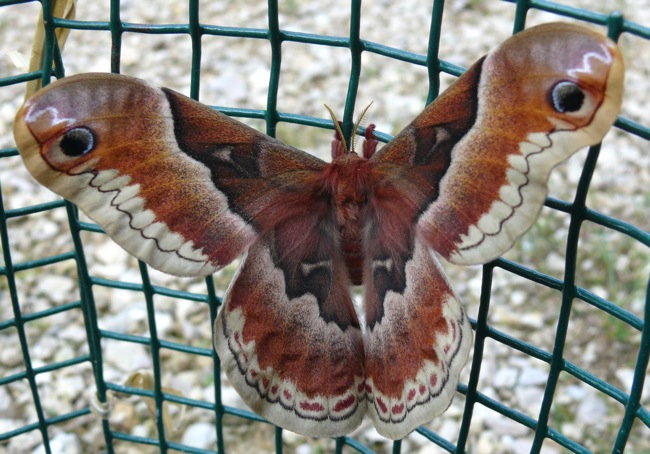 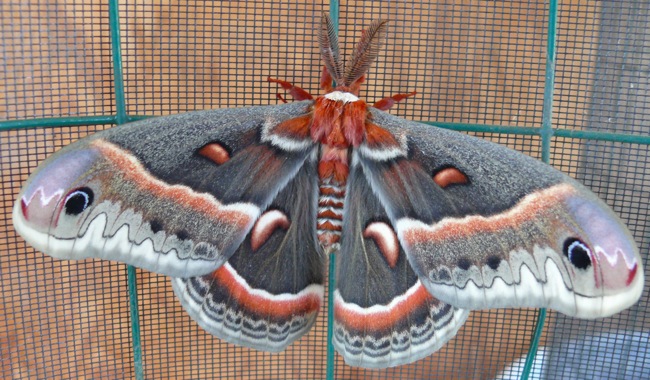 The summer flowers and butterflies are all out – here are some of my favorites. 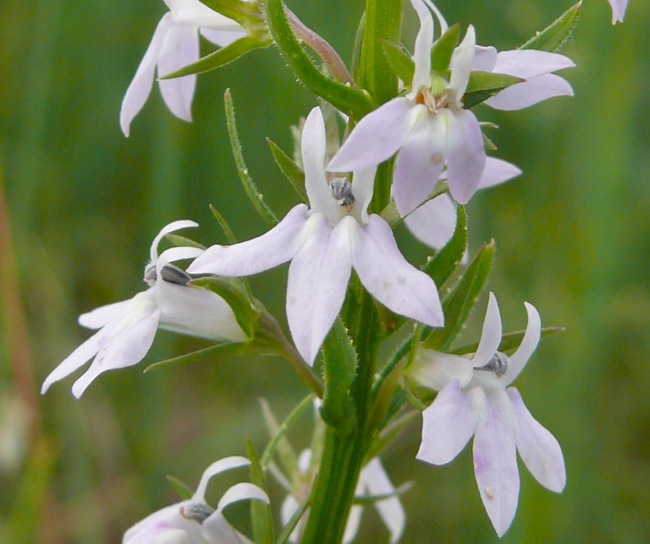 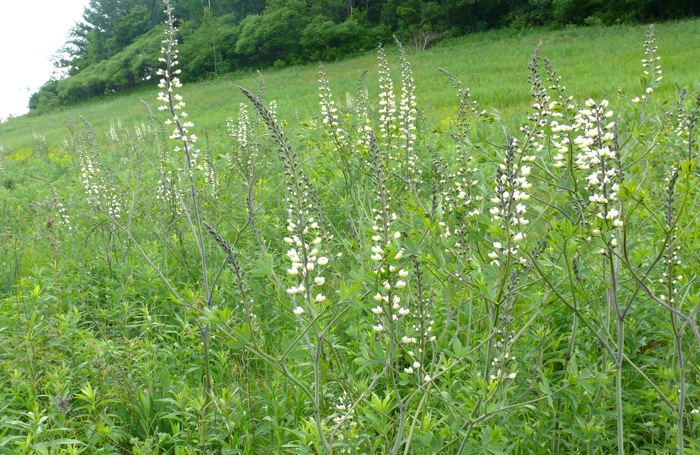 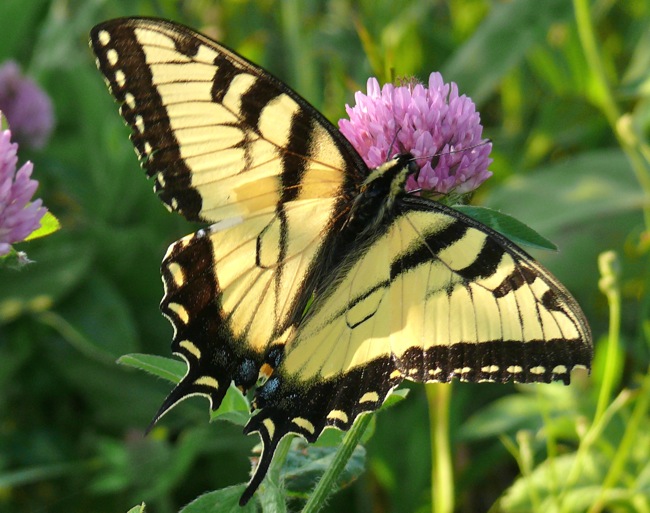 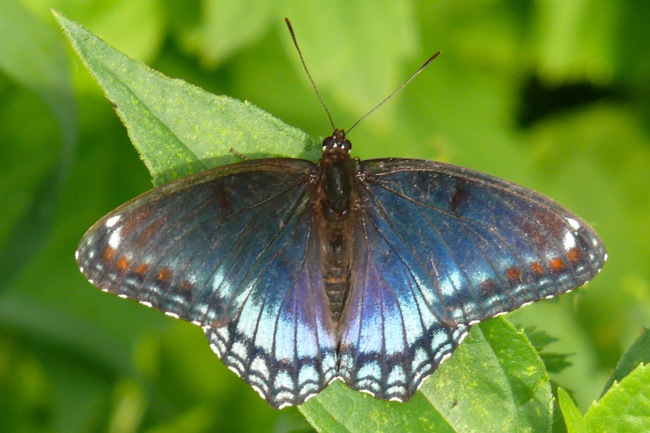 More Red-spotted Purples.  In the bright sun, these butterflies look black, but they have beautiful red and blue patterns under their wings. 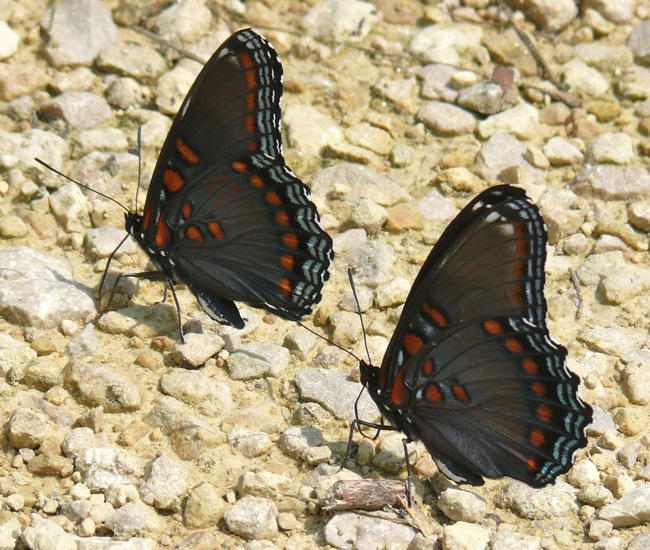 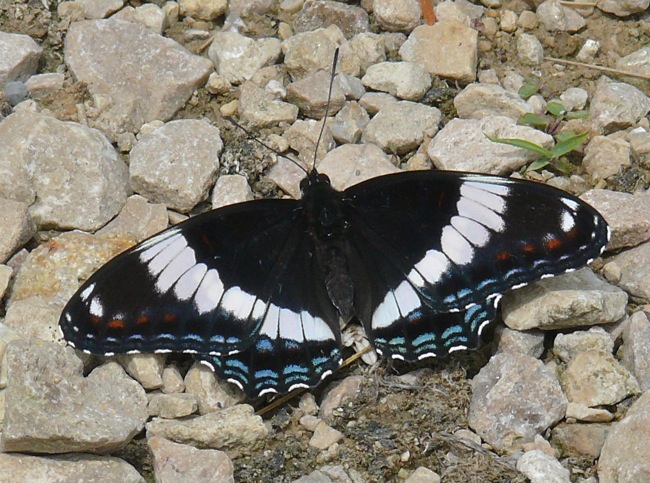 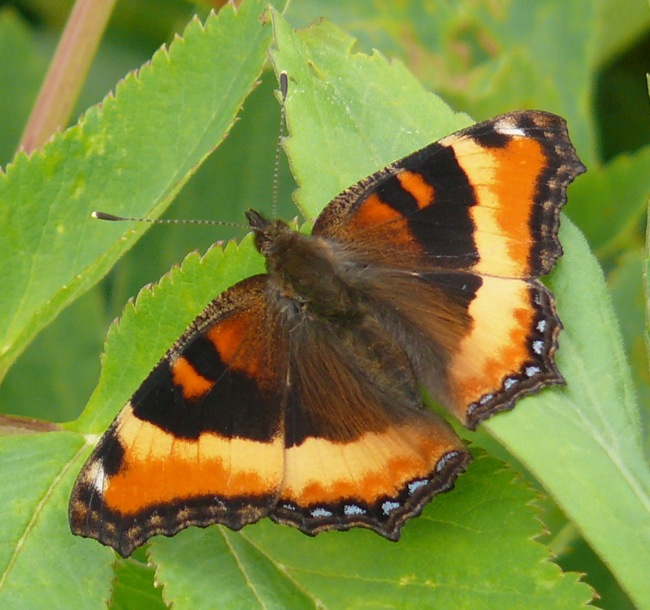 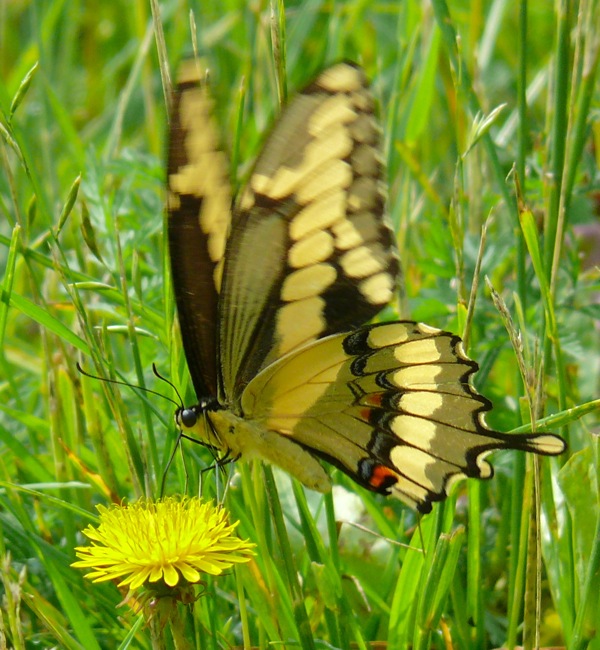 I found these two Commas extracting minerals from a pile of scat.  The one on the left is an Eastern Comma, the one on the right is a Gray Comma.  Seen from the top, it’s difficult to tell the two Commas apart, but this shows how different the undersides of their wings look.  (The smaller blue butterflies are Summer Azures.) 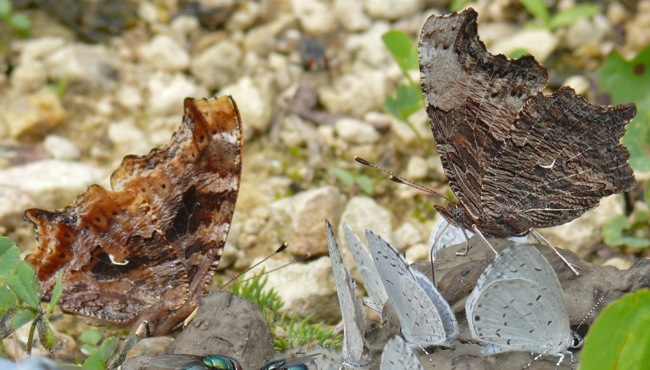 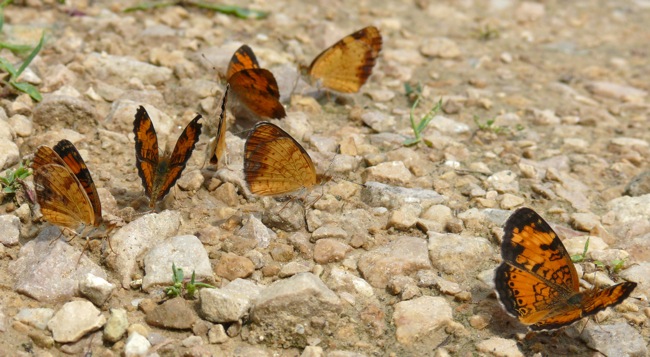 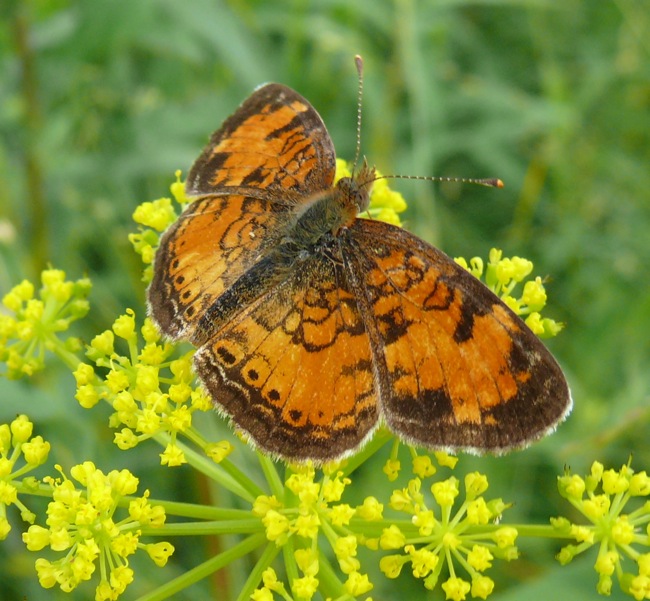 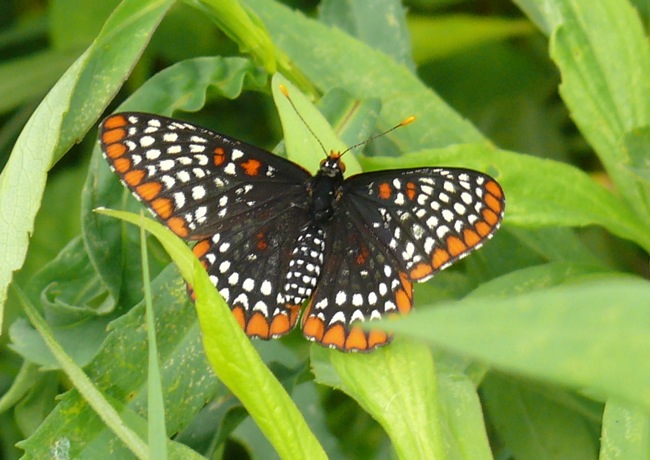 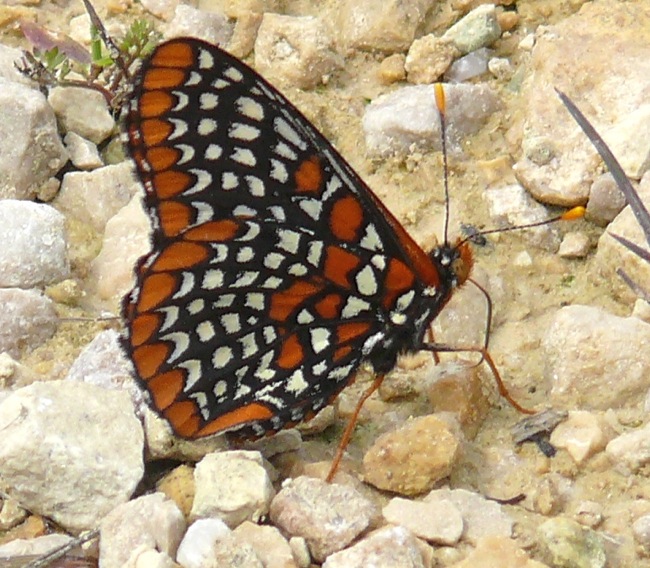 Here are some beautiful little hoppers on a stalk of Yellow Coneflower.  Like many hoppers, they are attended by ants.  The hoppers probably secrete some sugary liquid which attracts the ants, and the ants help to protect the hoppers. 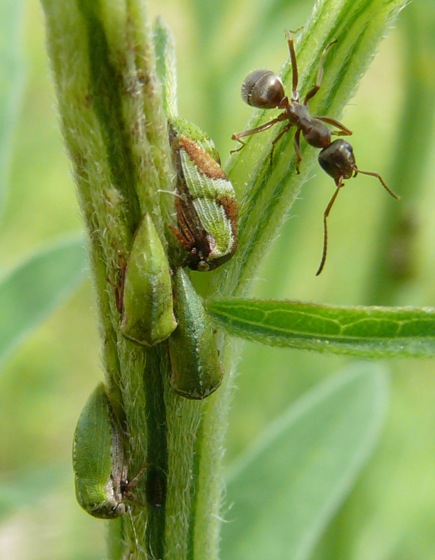 I saw this woodchuck as I was walking back along the driveway to the house.  I expected it to run as I came closer, but it just sat there, completely still, as I walked by. 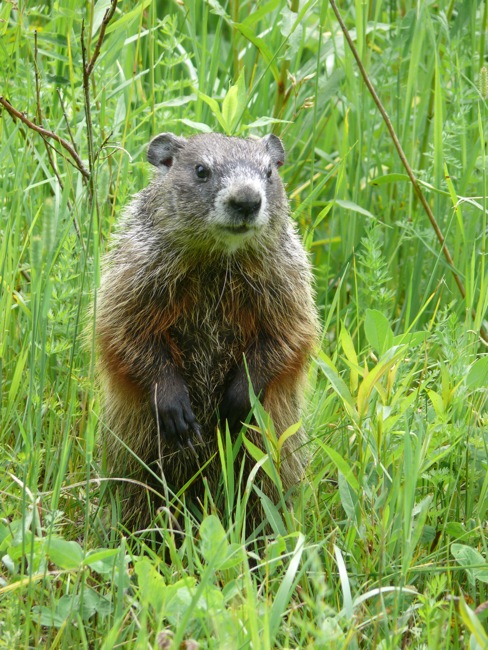 Storm clouds over the farm 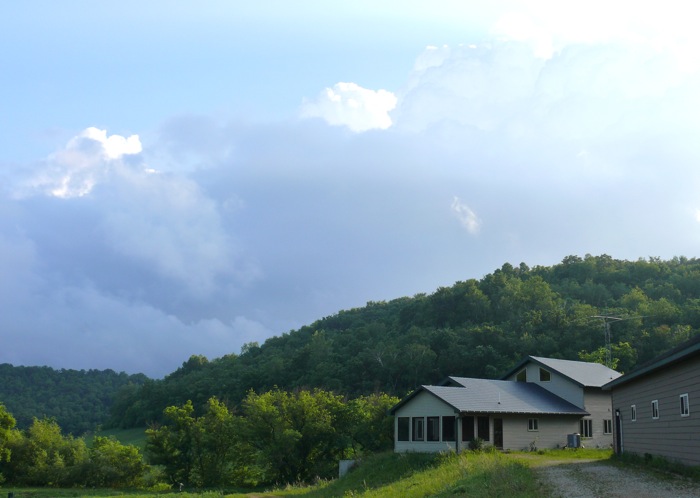